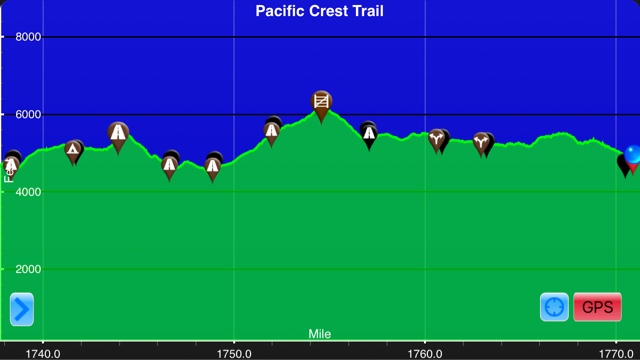 Total up/down: +4013/-3668
I was up at my usual time this morning. I don't think the shortcut takers are early risers because they all seemed put out by me packing up so early. It was more than a little satisfying. I didn't realize last night how close I was to making it to the lake. I passed by the trail junction first thing this morning. The potable water was directly on the trail, but I didn't bother stopping because I was carrying plenty of water. 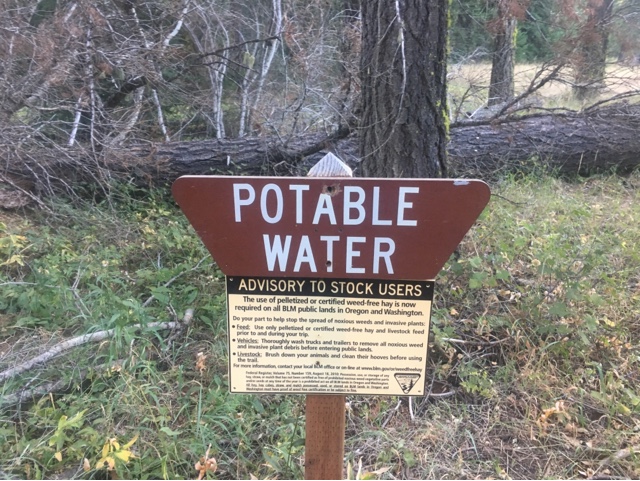 Such a rare treat
Most of the trail this morning was on a narrow corridor through private land. There were signs posted every twenty feet or so warning us to stay on the trail. I guess the land owners have had problems in the past with hikers straying onto their land. 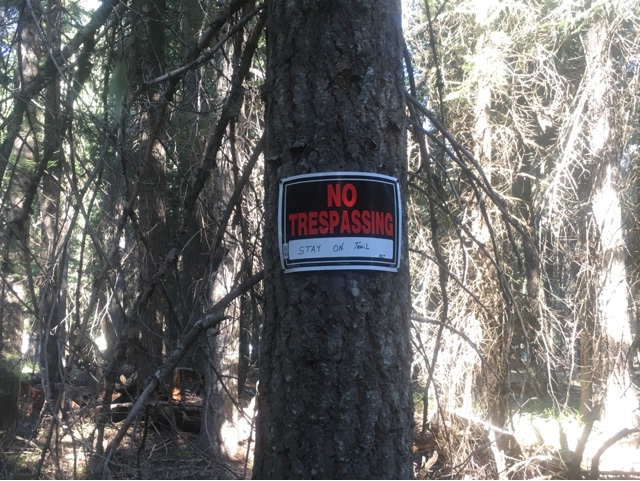 No problem
After hiking eight miles I came across my second water source. It was a small aqueduct with fast flowing water. I decided to skip this source because there were a lot of things floating in the water. I'm a little more careful where I collect water from since I switched to bleach. It would have been fine to drink, but bleach doesn't remove the floaters like the Sawyer Squeeze did. 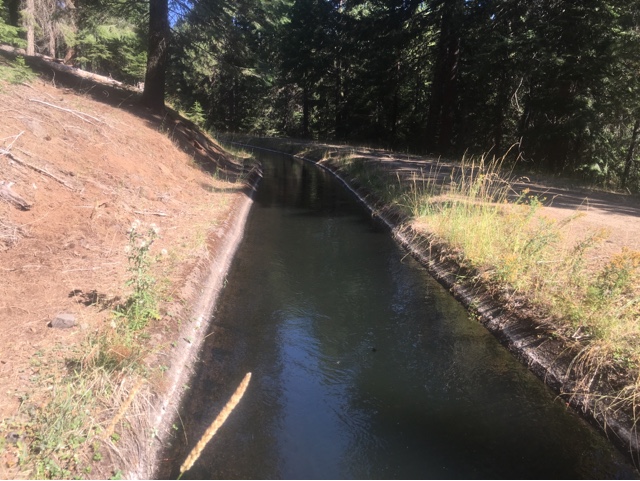 Aqueduct
I found a nice stream a few miles down the trail and collected water from there. I have had to carry more water than I expected in Oregon. The trail has been relatively dry or the sources have been icky. My next water source was over fourteen miles away. In Northern California I would have had to carry two and a half liters to make it that far, but so far Oregon hasn't been as exposed as N. Cali. I'm staying a lot cooler walking through the forests. The trade off for the cooler hiking is less views. I don't really mind so far. I've enjoyed the softer earth to walk on and being out of the blazing sun seems like a fair trade.

Every once in a while I pop out into the open
I crossed into the Rogue River National Forest today. The only reason I've ever heard of the Rogue River is because of Rogue River Brewery makes really good beer. I never realized that was how the beer got its name. 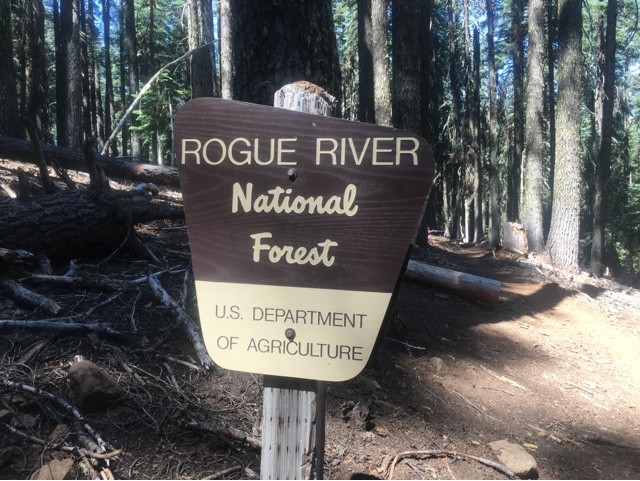 Rogue Dead Guy is a great beer
My next stop for the day was the Brown Mountain shelter. I was excited to finally see a shelter on the pct. I knew that there would be water and a picnic table so it was worth waking a tenth of a mile off trail for. 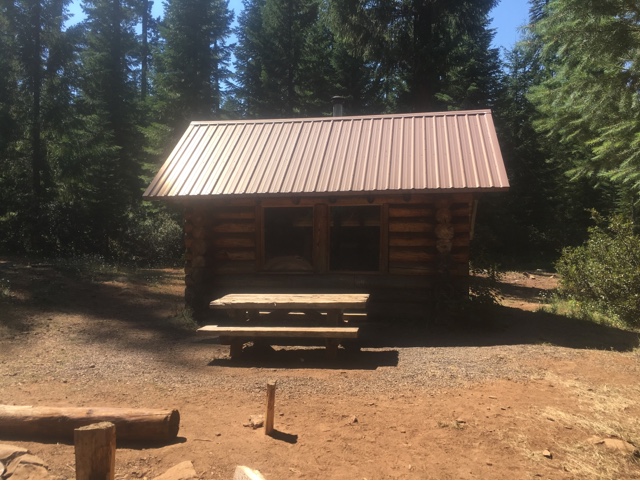 Brown Mountain Shelter
What I did not expect to find there was trail magic. There was four coolers full of beer, soda, Gatorade, watermelon, apples, oranges, and M&Ms. The coolers still had ice in them. It was obvious that someone had recently left this wonderful treat. As I was drinking a Coke the trail angels appeared. John and Susan maintain this site daily. They drive up from Ashland and use a wheel barrow to bring in the coolers. It is a .2 mile hike. Amazing! Thanks so much. 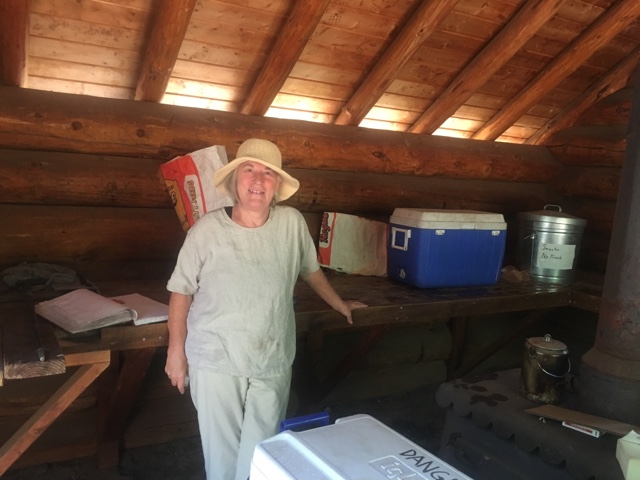 Trail angel
I stayed here for an hour. It was great to talk to such wonderful and caring people. Eventually I had to hike on. I still had ten more miles to go. As soon as I got back to the trail I noticed a trail marker. It informed me that I had completed two thirds of the trail. I had no idea! Woo Hoo, only one third to go. 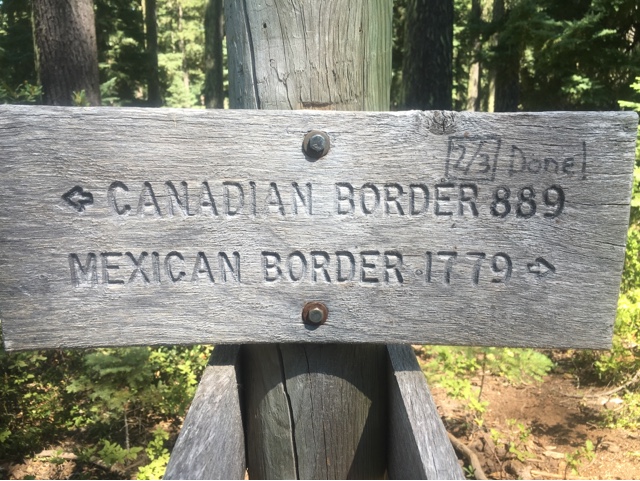 The numbers were a little off, but close enough
Once again the hardest terrain of the day came at the end of the day. I was hoping to get into camp a little earlier than I have been lately, but the last five miles were really slow going. The trail became really rocky and I was taking my time. The little rocks really make my feet sore. 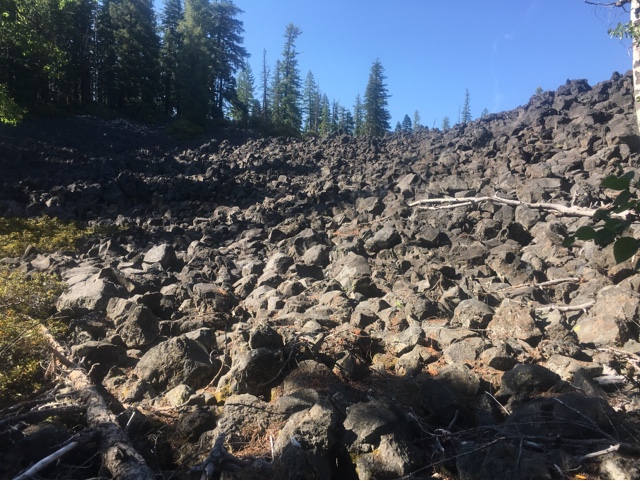 Always at the end of the day :-(
I only had about two miles left to go and it looked like I would make it to camp before seven o'clock. I was going downhill when I heard other hikers approaching. It is proper trail etiquette to give the uphill hiker the right of way. I stopped and moved to the side of the trail. As the hikers got closer I realized that I knew one of them. It was my friend Neemor! We hiked through the Whites together last year on the AT. He started hiking the pct southbound on July 15th this year. I was hoping that we would cross paths, but I didn't expect to see him yet. We chatted for about thirty minutes. It was great to see him again. 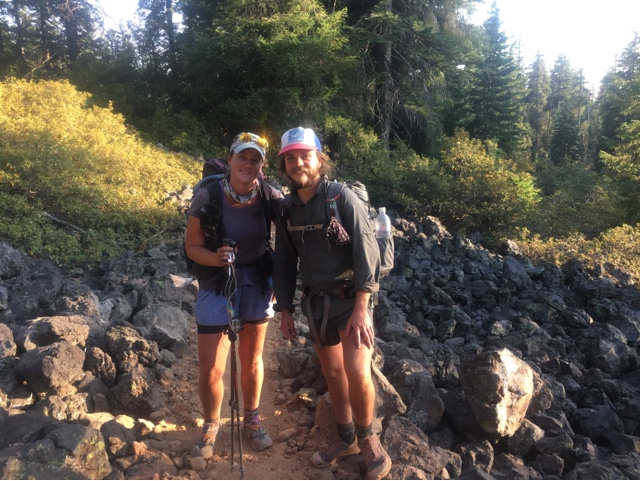 A Neemor sighting
Eventually we had to say goodbye. We both still had more miles to make before dark. I finished out the day just before the sunset. I ended up setting up my tent because I was camped right next to a creek. I have learned not to cowboy camp right next to a water source. The mosquitos haven't been too bad lately, but I did not want to tempt fate.
Most people are on the world, not in it -- have no conscious sympathy or relationship to anything about them -- undiffused, separate, and rigidly alone like marbles of polished stone, touching but separate.
- John of the Mountains: The Unpublished Journals of John Muir, (1938), page 320.
Posted by Yoda at 7:26 AM