Day 119- Miles And Miles Of Destruction 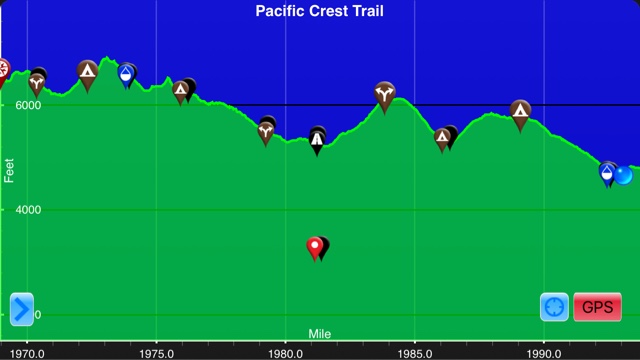 Total up/down:+2,717/-4,147 feet
Today was pretty epic and very miserable. This section is jam packed with some of the finest views Oregon has to offer, but it also contained lots of things to make my feet angry. I hiked through miles of lava and acres of dusty powdery sand.
The day started off great. I hiked out in the open and was able to see Middle and North Sister for most of the morning. Unfortunately, I never did get the proper angle to see all three Sisters at the same time. I hiked up a big lava field, gaining several hundred feet of elevation as I went. At first I really didn't mind all of the sharp, pointy rocks. I enjoyed the sharp contrast between the high mountain peaks and the black lava fields. 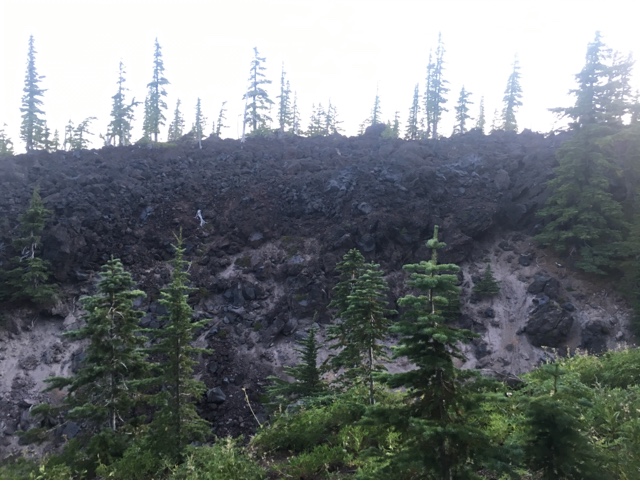 Trees growing up through the lava stones 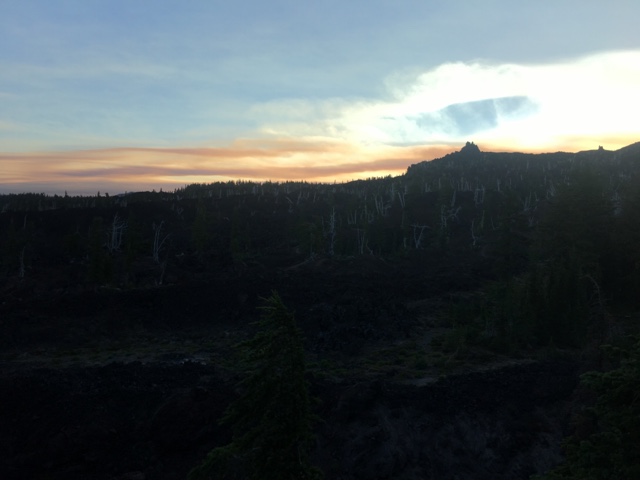 Sunrise
The trail meandered through the lava fields along the side of Middle Sister. It wasn't until later in the morning that I even realized that I had hiked next to North and Middle Sister. I just happened to look back to see where I had come from and, wham, there they were. 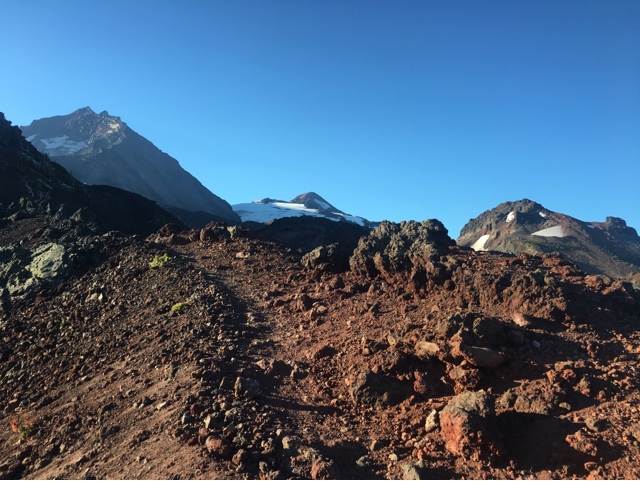 North and Middle Sister
As I continued hiking I could see other mountains in the distance. I had a pretty good idea what they were called, but I wasn't a hundred percent. Moments later I passed by a day hiker. I asked him what mountains I was seeing in the distance. He was nice enough to identify them all for me. 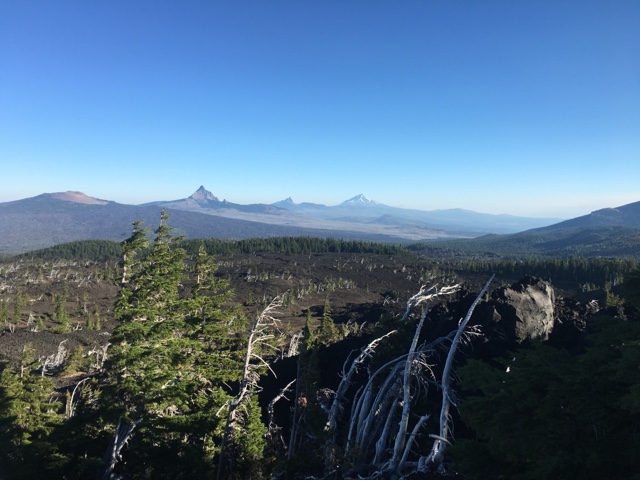 Left to right: Mt. Washington, Three Finger Jack, and Mt. Jefferson
For the rest of the hike, which I expected to be easy, I bounced between views of the Sisters and Jefferson, Washington, and Three Finger Jack. I tried to keep my head up so I could enjoy the view, but with all of the lava rocks I spent most of the day looking at my feet. The only time the lava rock path disappeared was when it turned into loose sand. This really made me slow down. 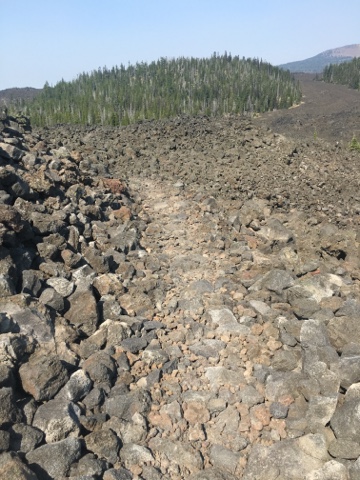 Miles and miles of rocks
The looses gritty sand occurred when I was hiking through an old burn area. I swear, today was twenty miles of lava, sand, and burned forest. I've walked through a lot of burn areas, but the scope of this fire was staggering. 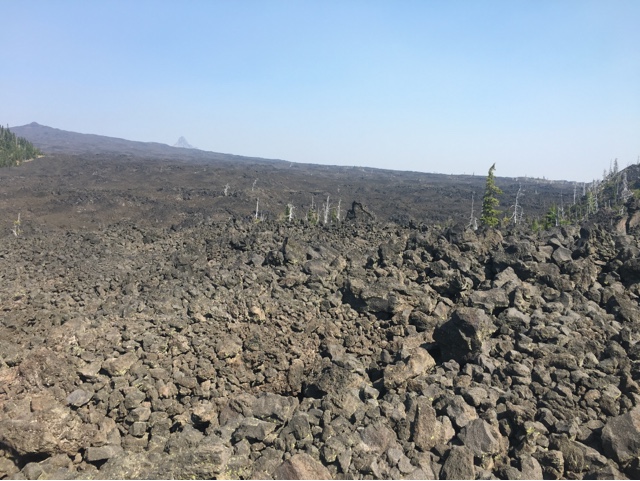 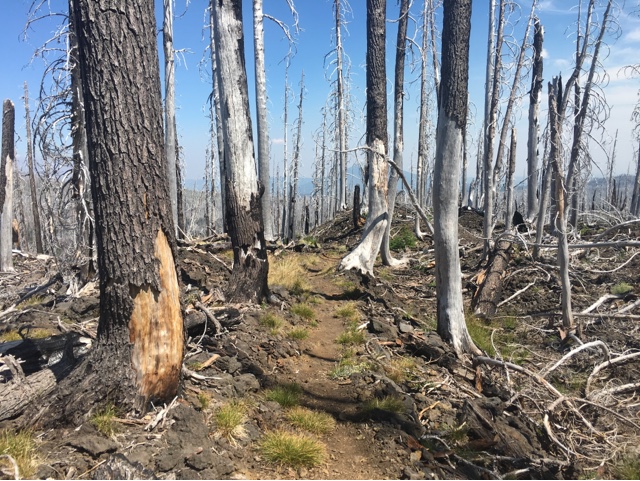 View of the burn from up close 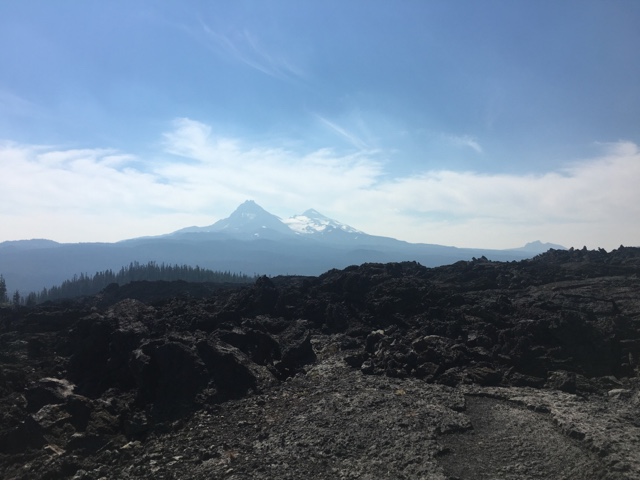 Looking back at The Sisters
With the more difficult terrain today, I just couldn't get into a rhythm. It took me much longer to cover twenty miles than it usually does. I expected today to be a short day since I was going into Big Lake Youth Camp to pick up a resupply box. I was planning on picking up my box and hiking a few more miles, but since I didn't get there until four o'clock I decided to spend the night there. I wasn't sure what to expect, but it exceeded my expectations. They held my resupply box for me with no charge, that isn't always the case. Sometimes it costs $5-10 to pick up a box. They also provide me with a free shower(they even gave me a towel). I missed laundry, but they let me do a load on my own. They had a cute little hut for us hikers to hangout at. I was also invited to have dinner with the campers and their parents. I didn't have high expectations, but the food was delicious. Tonight they served vegetarian curry, with rice, egg rolls, salad, and fortune cookies. Plus, I was allowed to eat as much as I wanted. I had two plates of salad, two servings of curry, and I don't know how many egg rolls. I was absolutely stuffed. This was the last week of camp and they were hosting a retreat for pastors and their families. The pastor and his family that I sat next to were extremely interested in thruhikers. He asked us a million questions. He also took a picture with all of the hikers and then lead is in a prayer. The church camp was a great experience. All of the services that they offer to hikers are free of charge. They do however except cash donations. I thought it was a great deal, so I left a generous donation. I hope the other hikers there did as well. 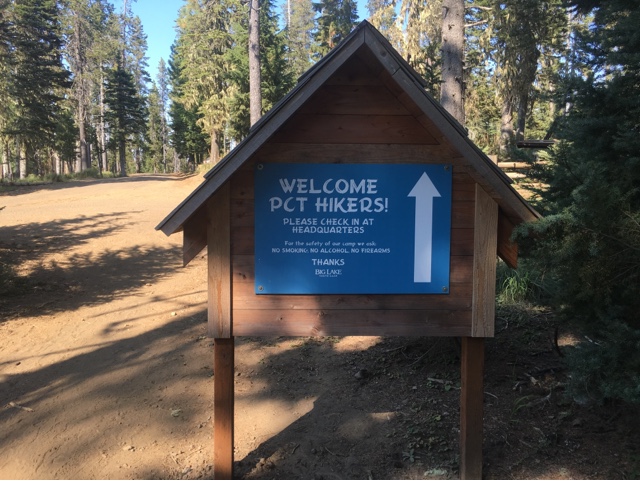 Big Lake Youth Camp
"Do not say, ‘It is early morning,’ and dismiss it with a name of yesterday. See it for the first time as a newborn child that has no name."
– Rabindranath Tagore
Posted by Yoda at 11:15 PM