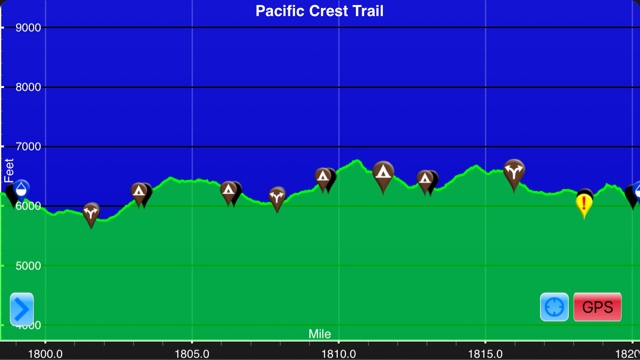 Total up/down: +3,479/-2,671 feet
I slept like a baby last night. I cowboy camped right next to a babbling brook and the white noise allowed me to sleep through the night. This is a rarity on the trail. Usually I wake up every few hours. I always go right back to sleep, but night after night of interrupted sleep takes its toll. Last night was the coldest it has been in a long time. I wish my day had started out with a climb so I could have warmed up faster. The blow downs continued for another couple of miles. It wasn't as bad as yesterday, but it still wasn't great trail. Almost as soon as I left camp I crossed the 1,800 mile mark. A marker had already been made, but it was about one tenth of a mile too soon. 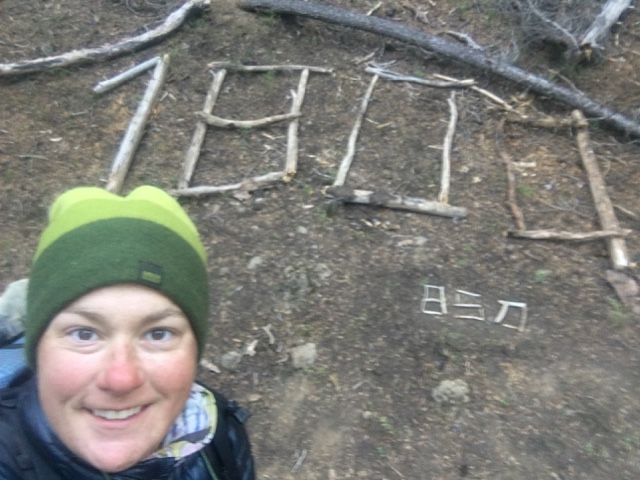 1,800 miles
A southbound hiker added a mile marker next to the northbound marker. They have hiked 850 miles. I decided to take the time to make a 1,800 mile marker at the correct place. I think this is only the second one I have made the entire trip. 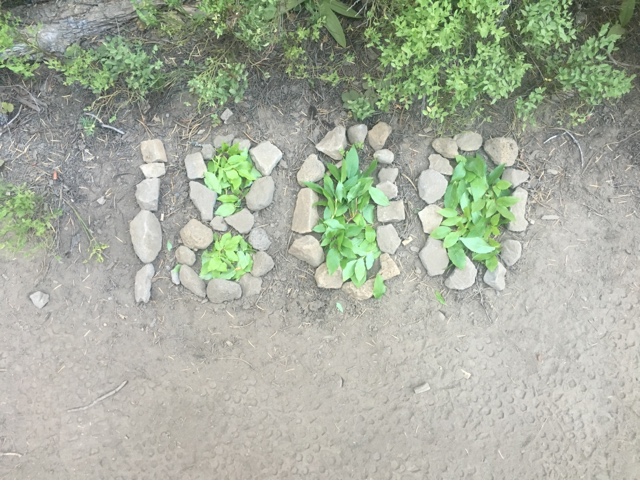 Here you go, Mom
I didn't dilly dally to long. I had twenty one miles to hike before making it to the store in Crater Lake. I wanted to pick up my resupply box and possibly do laundry before hiking a few more miles. The closer I got to Crater Lake National Park the better the trail conditions became. National Parks have a better budget than National forests, therefore the trail is usually in better condition. More people visit the National parks so it is a better allocation of funds to keep the trails pristine.
Most of the hike into Crater Lake was uneventful. I mainly walked through a nice forest with old growth trees. There were two notable burn areas, but the fires couldn't have been too recent, there was too much new growth. 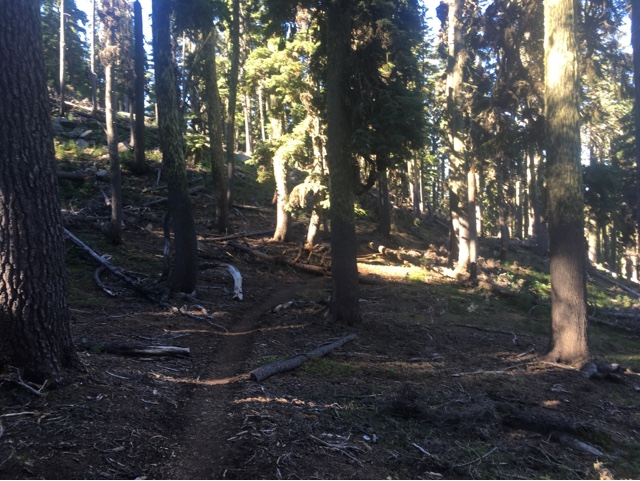 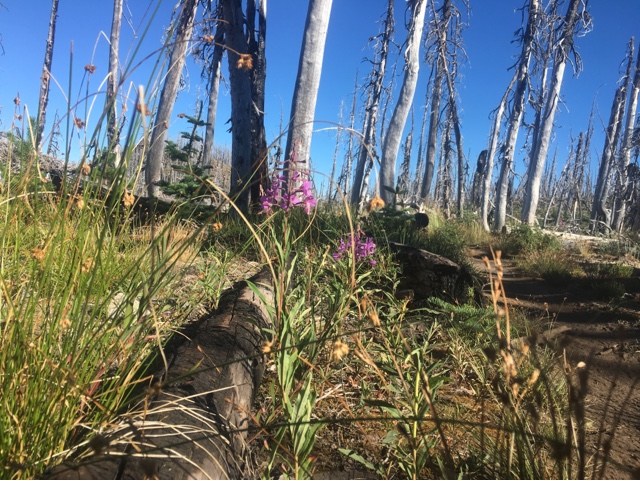 Life reappearing after a fire
I was super stoked to make it into Crater Lake National Park. I stated in an earlier blog post that the pct went through five national parks, Sequoia, Kings Canyon, Yosemite, Lassen Volcanic, and Crater Lake. I misspoke, I forgot the trail skirts the border and briefly crosses into Mount Rainer National Park and goes through North Cascades National Park. Out of all of these parks I was the most excited for Crater Lake. I didn't do a ton of research into the trail this year. I didn't want to have any expectations. I had never seen a picture of Crater Lake. All I had was a little bit of knowledge about the geology of the area. 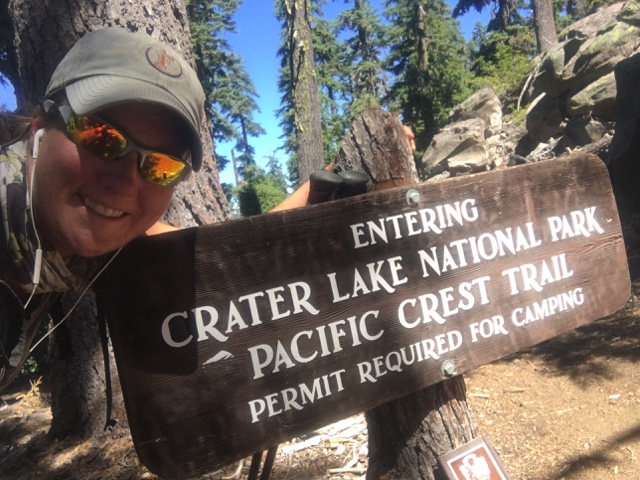 A selfie was required
A few miles after entering into the park I made it into Mazama Village. I had sent a resupply box to the store located here. There were a bunch of hikers loitering out front. I actually knew a couple of them. I finally caught up to, Homestretch. We hiked together for a few days in the desert. I met her around the same time as Evac, Hawkeye, Flamin Hot, Sprinkles, and Homegrown. I also saw Mozart and two of the guys from the Oregon/California border. It is always nice
to see familiar faces in town. I picked up my box and bought an Arizona Iced Tea, which seems to be my new go to drink when I get into civilization. I was super excited that my resupply box included my new Smartwool shirt. Thanks again, Chris. My old shirt looked like Swiss cheese. 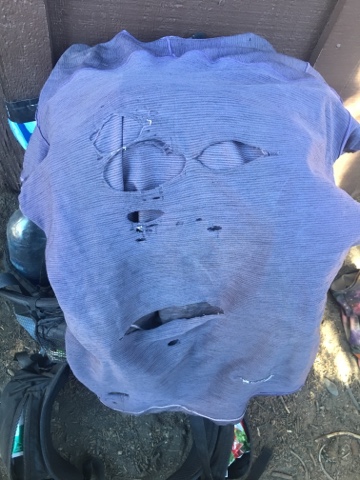 Angry face of holes on the back 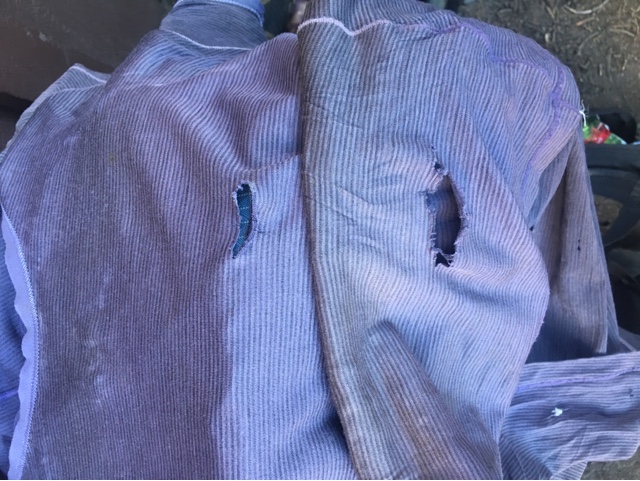 Couple holes on the front 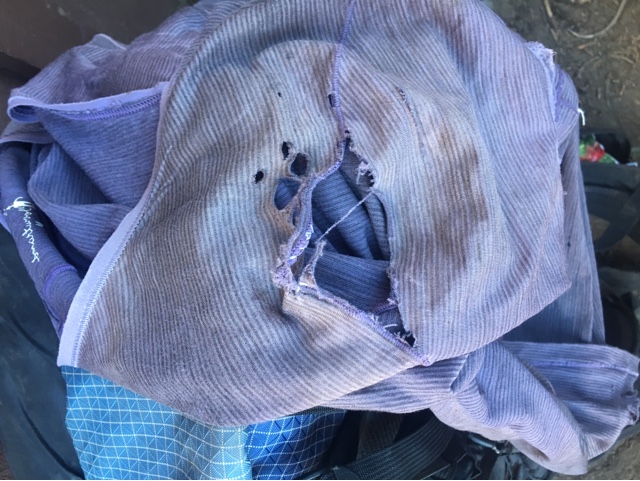 Sleeve nearly ripped off
I think I got my money's worth out of this shirt. I was kind of sad to throw it away. It has been like an old friend. Unlike the synthetic shirt I wore last year, after washing it did not retain its funky smell. I split a load of laundry with Homestretch and hung out chatting with the other hikers. Almost everyone else was going to camp at the free hiker/biker site in Mazama Village. I decided to hike out after my laundry was done. I really wanted to see the sunrise over Crater Lake. By hiking another four and a half miles today that set me up for success tomorrow. Unfortunately, the laundry facility only had one working dryer and it was being used. I set my clothes out in the sun to dry while I waited for the dryer to be free. By five o'clock the dryer was still occupied, but I needed to leave. My clothes were about ninety percent dry so I attached them to the outside of my pack to continue drying. Just as I was getting ready to leave a couple came out from the store and set down two six packs of beer on our picnic table. They wished us luck on our hike and casually walked away. We were all stunned and gave them a round of applause as thanks. I couldn't leave without drinking one, that would have been rude.
The hike up to Crater Lake was more difficult than I had expected. For the next eleven miles I'll be hiking on a pct alternate trail. The pct splits into a hiker trail and an equestrian trail. Since stock animals aren't permitted on the rim trail they have a different trail around this area. Without stock animals the pct doesn't have to be s gradual grade and it  became a lot steeper than normal. I made it into camp just as the sun was setting. I set up as quick as possible and walked .2 miles up to the lake. I just couldn't wait until the morning to get my first view. It was spectacular. Since the sun had just set the sky was full of color. 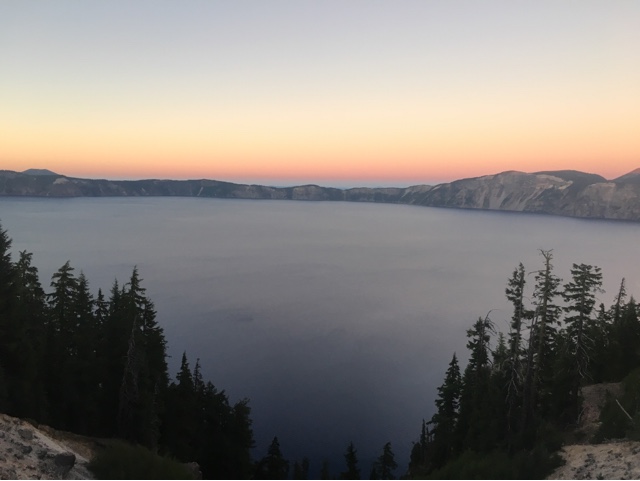 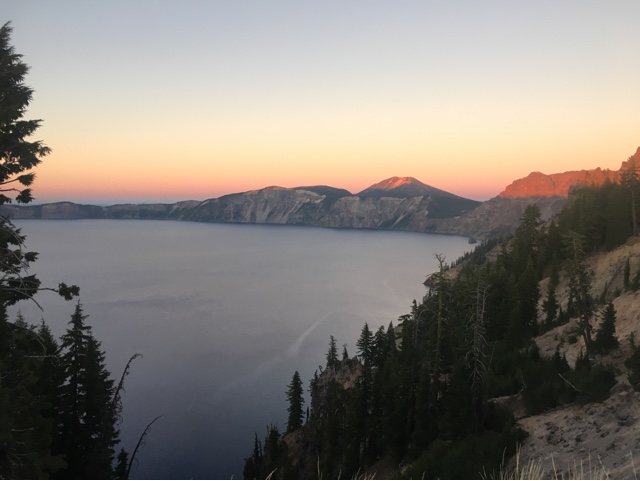 Phantom Ship Island barely visible
I am more than excited to see the sunrise over the lake. By the time I made it back to camp it was completely dark. I cooked, ate dinner, wrote a blog post, and tried to go to sleep. Just as I was drifting off I heard a strange scurrying sound next to my head. I grabbed my headlamp just in time to see a mouse running away. This was a problem because I was cowboy camping. I ended up cuddling with my food and hoping Mickey would leave me alone(and not tear up my pack looking for food). Needless to say, it was a restless night.
I forgot to mention this cool tree I passed. My hiking pole is extended to four feet
"If you try to fight the course, it will beat you."
- Lou Holtz
Posted by Yoda at 9:55 AM