Day 94- I Thought It Would Be Easy 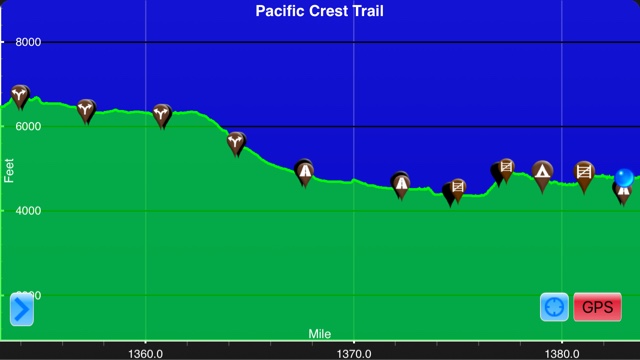 Total up/down: +1329/-3211 ft
I mistakenly thought today would be an easy day. According to the elevation profile I thought I would breeze right through some creamy miles. I was wrong. I didn't sleep very well last night. We were terrorized by deer all night long. There were seven deer that paraded through camp all night long. Deer aren't very scary unless there is also an aggressive juvenile bear living in the area. The deer stomping through camp had everyone on edge. At two o'clock in the morning a deer staring into your tent looks just like a bear. I was glad to wake up and get the day started. I was the first one out of camp this morning. I made plans to meet up with the rest of the gang later in the day. The trail crossed highway 44, which led to a convenience store and restaurant. We decided to all meet up at the store.
The hike out of camp was lovely. It crossed next to several lakes. For the first time in a long time it was a cold morning. As I hiked I wished I had put my gloves on. I didn't want to stop and dig them out of my pack so I suffered with frozen fingers for the first hour of the morning. 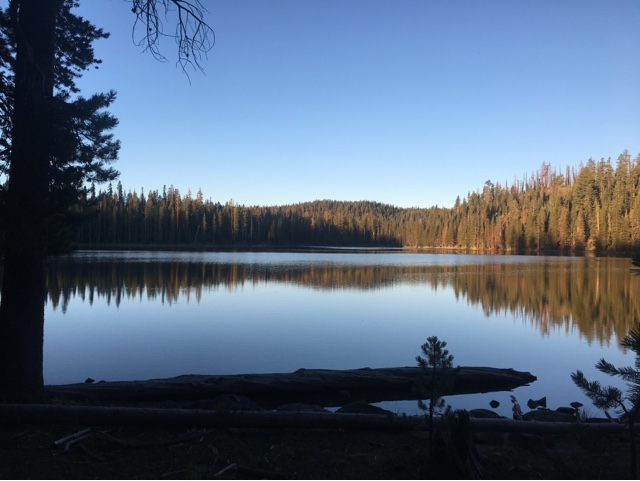 Lower Twin Lake
It warmed up really quickly. By seven thirty it was already uncomfortably warm out. I was amazed by how quickly the temperature changed. The landscape also changed quickly. Around the lakes was lush greenery. A few miles later was reminiscent of walking through the desert. The day would only get hotter. 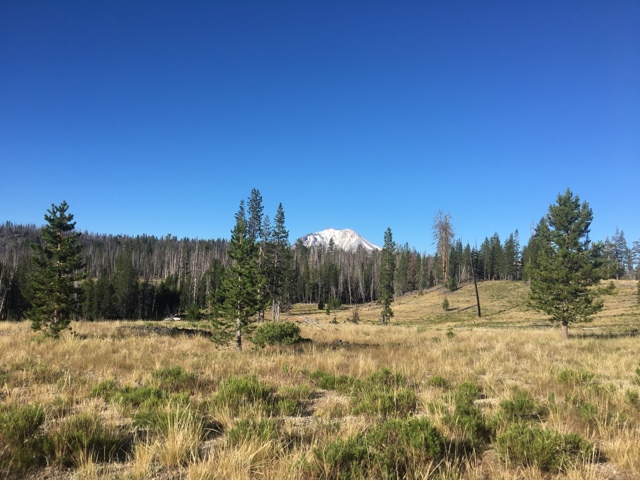 Getting dryer. Good shot of Lassen Peak
It didn't take long before I finished up hiking in Lassen Volcanic National Park. I have now finished four of five National Parks, Sequoia, Kings Canyon, Yosemite, and Lassen. I only have Cascades National Park left, which comes at the end of the hike. After leaving Lassen the terrain actually looked more volcanic instead of less. I could see evidence of the 1915 eruption everywhere I looked and stepped. 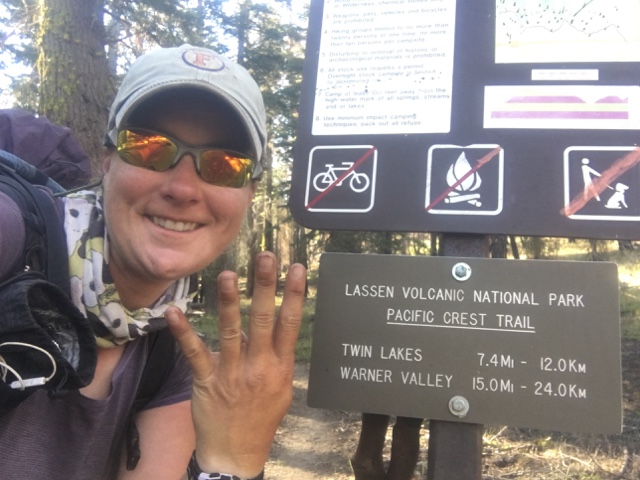 Goodbye Lassen NP
The trail stayed very exposed and water was getting difficult. I passed by Hat Creek early in the day. That is the one of the last natural water sources for the next forty miles. I have other water sources I can take advantage of, but they are less than ideal or far off of the trail. I was looking forward to the convenience store so I could get more water and a Gatorade. I knocked out the first sixteen miles by noon. At that point I came to a short side trail that would lead me into town. I would soon find out that it did not lead me into the right part of town. 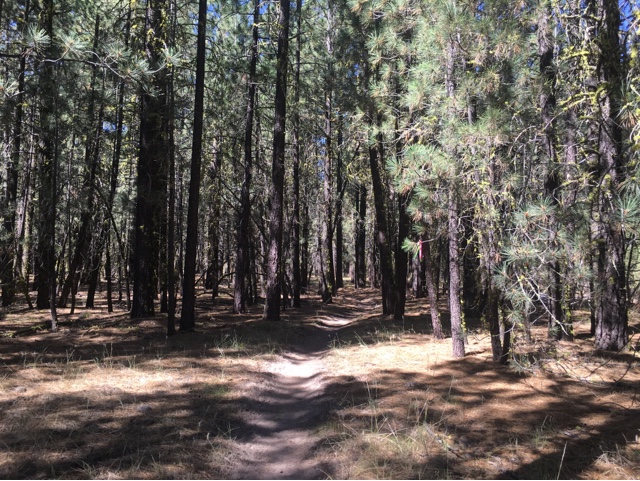 Nice easy terrain
The side trail brought me out to a RV park with a small convenience store. When I asked the clerk inside where JJ's Cafe was, she replied that it was three miles down the road. I was understandably confused. I thought it was .3 miles away. I had inadvertently come off of the trail three miles too soon. I bought and drank a Gatorade before heading back out.
The rest of the day would be miserably hot and very exposed. I hustled to the next road crossing dreaming of a burger and soda the entire way. When I finally reached my destination I was ecstatic. I stopped at the gas station first and bought a Dr. Pepper. Then I went next door to JJ's cafe for a burger and fries. The owners are extremely hiker friendly. As usual the burger was tasty and I was able to charge my electronics. I waited for the rest of the group to show up, but after two hours they were nowhere to be found. If I wanted to make my miles I had to push on. I only had ten more miles to go so I only took 1.5 liters of water with me. That was a big mistake. After a short road walk I got back into the trail. I decided to take a short side trail to checkout something called the Subway Cave. It was well worth the trip. The Subway cave is a lava tube about 1,000 feet long that was formed less than 20,000 years ago. The temperature inside was around 46 degrees, which made it the perfect place to stroll around in. 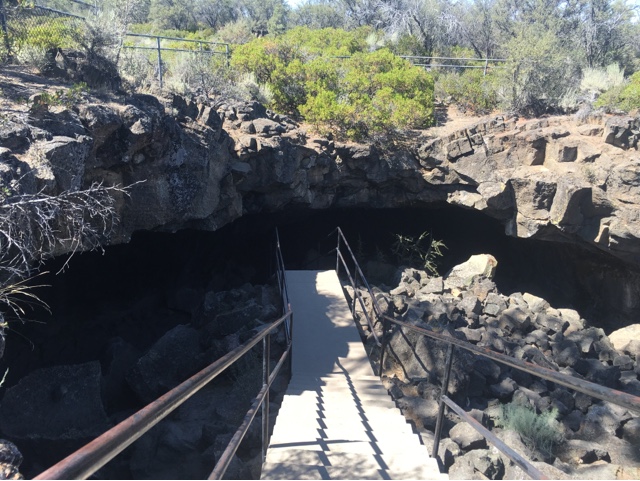 Entrance to the Subway Cave 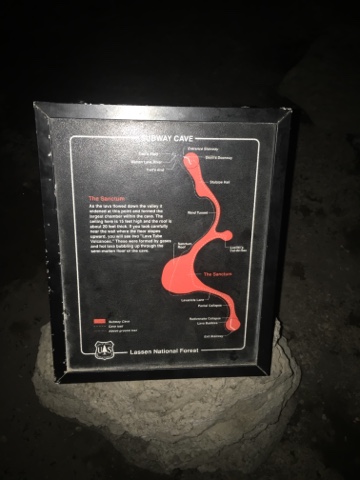 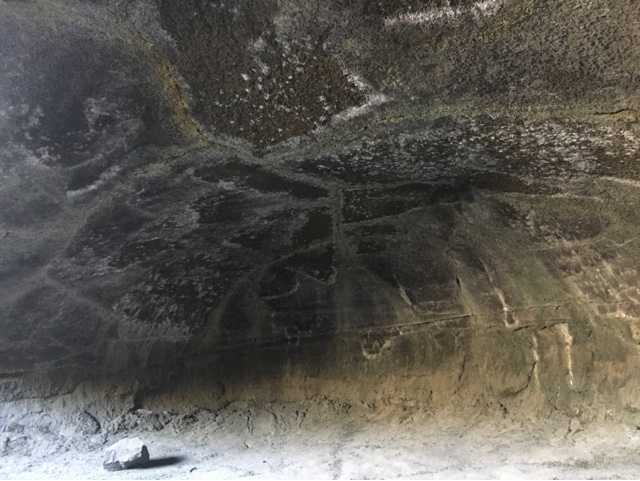 Inside the lava tube(at the entrance)
It was pitch black and very eerie inside. I took a nice long break to cool down. Eventually I had to leave. I still had eight more miles to hike and it was getting late in the day. My energy level was quickly fading and the next thirty miles would be very exposed and hot. I put some music on and hiked out.
I was quickly going through my water reserves. I hadn't taken into account how exposed the terrain was. After hiking four miles I was almost out of water. I came to a parking area with an overlook and bathrooms. It was my lucky day. A very kind trail angel had left a case of water bottles next to the bathrooms. Just to be clear, I was never in any danger. It would have just been a very thirsty four more miles. 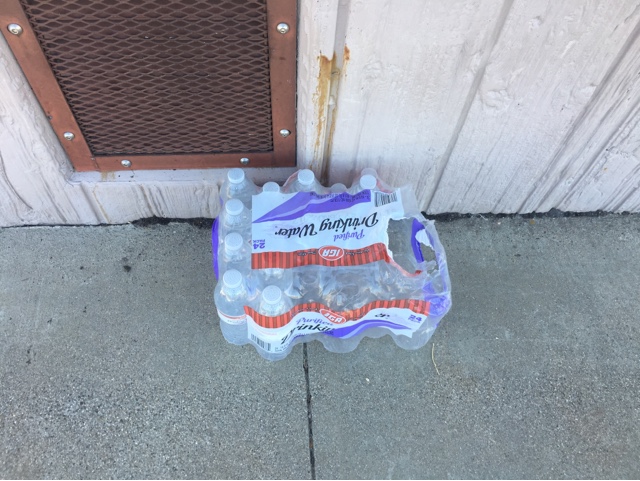 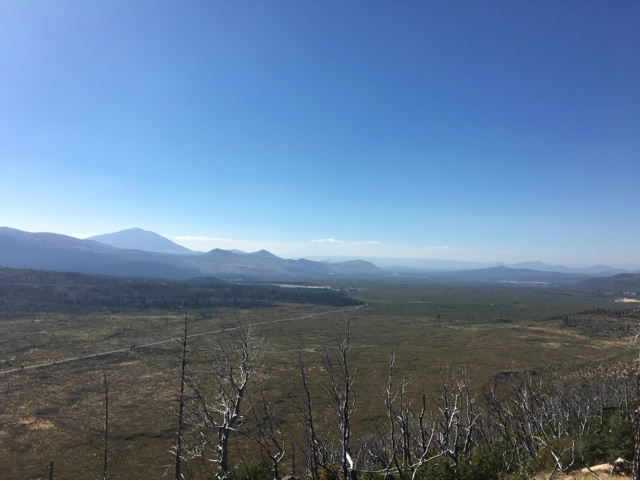 Mt. Shasta was barely visible to me. I don't think you can see it through the haze
This next section of the hike will be really cool. I'll be walking Hat Creek Rim. It is a very dry stretch, but the views will be amazing.

The start of Hat Creek Rim
I'm camped at the beginning of a 29 mile dry stretch. My water source for the evening is located .3 miles straight downhill. It was like descending into the dark side to get water. Not exactly how I wanted to end a 29 mile day. 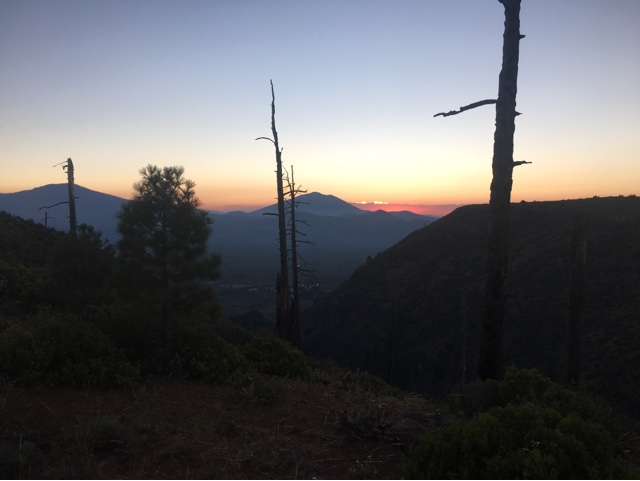 Barely got water before the sunset
"Suffering usually relates to wanting things to be different than they are.”
-Allan Lokos
Posted by Yoda at 10:46 AM