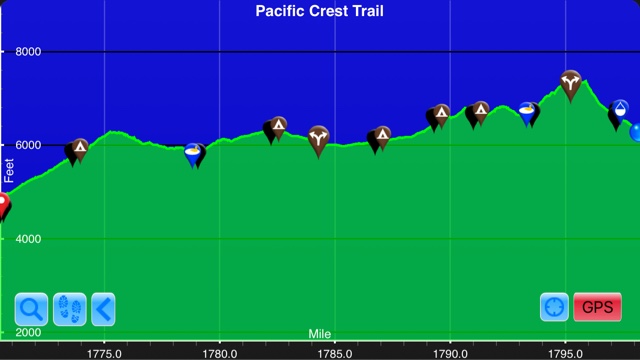 Total up/down: +3,942/-2,631 feet
I thought I was going to have a nice and easy day today, but I was wrong. Due to the way the water sources were spread out I planned out a twenty seven mile day. I have been doing up to thirty miles pretty consistently so I thought twenty seven would be easy. The elevation profile seemed like a breeze as well. What I hadn't planned on was the horrendous trail conditions. I felt like I was hiking through molasses. Every few feet trees were blown down. Some I could easily step over, others I had to climb over, and most of the time I had to hike around.
The day started off pretty normal. I had no inclination of what was to come. I cruised through the first eight miles and I made great time too. I stopped for second breakfast around nine thirty. As I was sitting on a dead tree eating my poptart I looked over and saw an Oreo on the log next to me. I only hesitated slightly before picking it up and eating it. It didn't taste too stale so I'm guessing it hadn't been there for long. 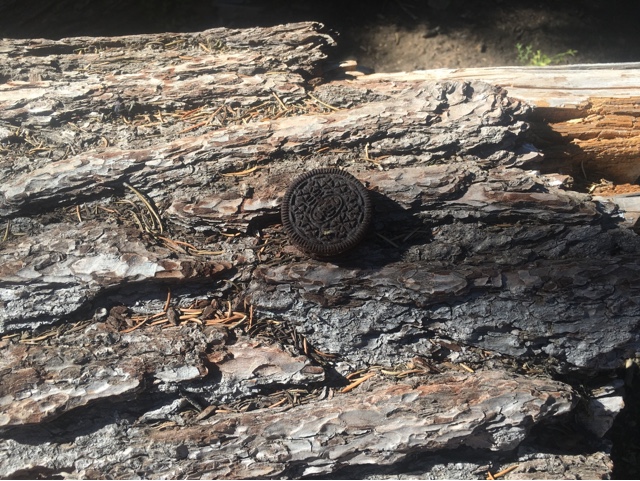 My mother will be horrified by this tale
I thought that this Oreo was a good omen for the rest of the day. Shortly after the mysterious Oreo I hiked past a clearing with a lake in the distance. Too bad it was so far away. I could have used a nice dip in a lake. Alas, every time I have extra time in my day for a lake it is too far away. 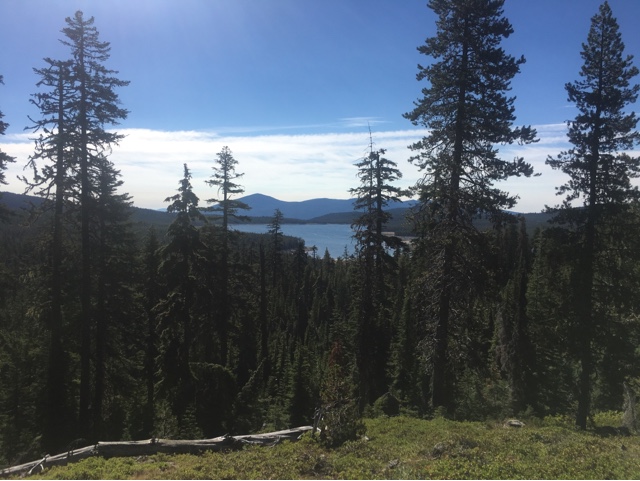 Pretty sweet lake in the distance
Twenty minutes after I passed the lake my day went to hell. At first I had fun hoping over and around all of the blow downs. After hours and hours of it, not so much. 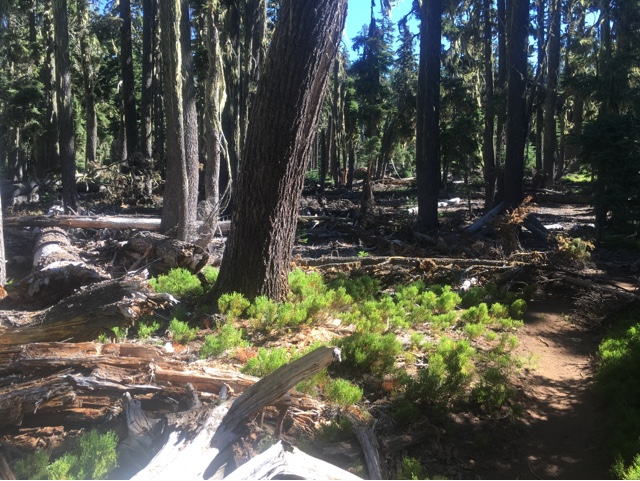 At this point I was still enjoying myself 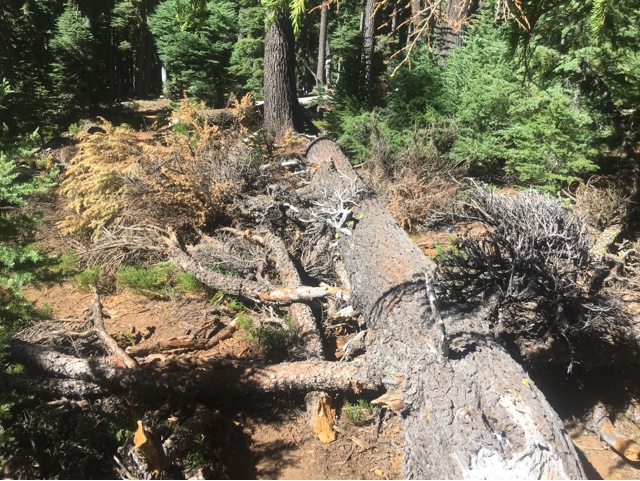 Thirty minutes later the novelty was beginning to wear off
As the day progressed the downed trees got much worse. They were closer together and the trees became bigger and bushier. I probably added a few miles to my day for how much I had to walk off trail to get around the trees. I think I hiked about fifteen miles of my day through this madness. I had one short section were I was mostly above tree line and could walk normally. I also had cell reception through this section so that brightened my day. I was able to get a few blog posts published and to check the tracking on an Amazon order. Sometimes it is the simple things in life that can make your day. 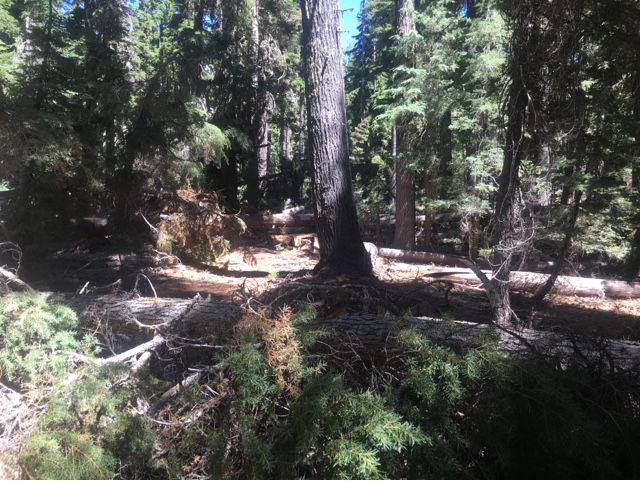 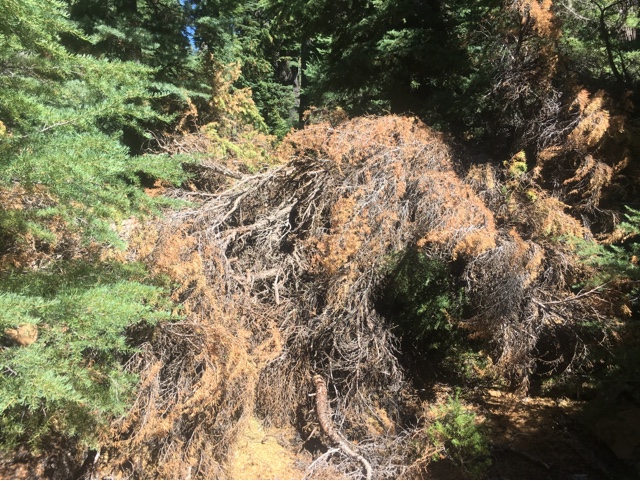 Several trees down. There is a trail under all of that mess
The cell reception couldn't have come at a better time. I just finished Harry Potter and the Order of the Phoenix. I took the opportunity to download the Audible version of Harry Potter and the Half Blood Prince. Once I got the audiobook downloaded the downed trees didn't bother me as much. I find that audiobooks are a better distraction than music. I prefer music to get me up big climbs. 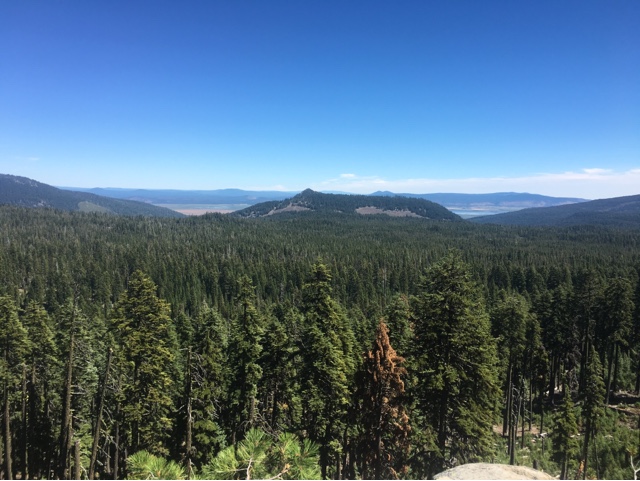 Great view while I downloaded Harry Potter
Unfortunately, after being above tree line I descended into more madness. I'm super thankful for all of the hard working trail maintainers. I have heard that this section was even worse just one month ago. A lot of people just turned around and gave up, skipping this section until later. In order to clean up all of the downed trees the maintainers come in via horseback and use chainsaws and pulleys to clean up the mess. It is hard to believe that it was even worse just one month ago. 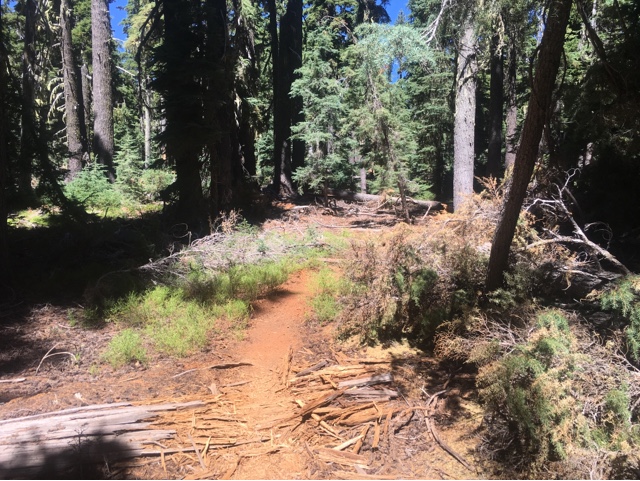 Obstacles as far as the eye can see
When I started out this morning I expected to make it into camp by 5-5:30. Instead I got in around seven. Oh well, looking back on it now it wasn't a difficult day of hiking. It was just time consuming. As I was cooking dinner my friend, Mozart, walked by. I haven't seen him since Mt. Whitney. It was great to catch up. By the sound of things we are hiking roughly the same daily mileage. It would be nice to have a friendly face around for awhile. Ever since leaving Tahoe I see new people and hike around them for a day or two and then I get ahead and never see them again. If I can't hike with the Wolf Pack I would at least like to be in a bubble.
"Conquering any difficulty always gives one a secret joy, for it means pushing back a boundary-line and adding to one`s liberty.”
~ Henri Frederic Amiel
Posted by Yoda at 7:13 AM