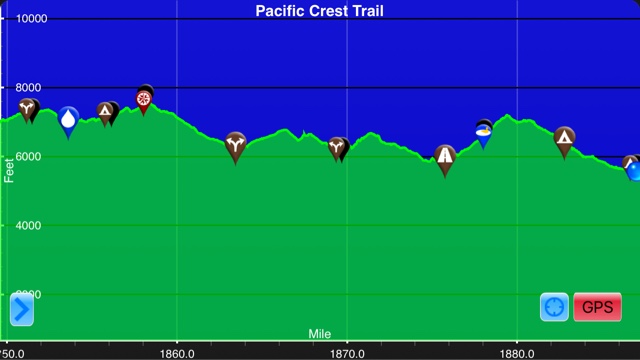 Total up/down: +3,931/-5,330 feet
Since the days are rapidly getting shorter I've been trying really hard to wake up earlier. The problem is that I have to rely on my wristwatch alarm, which I usually don't hear. I don't want to set the alarm on my cell phone and wake everyone else camped close to me up. I have naturally been waking up by six o'clock, but I'd like to be up by five thirty. There is light enough out to start hiking without a headlamp by six o'clock. Last night I set the alarm on my cell phone to vibrate, but it didn't wake me up either. I didn't start hiking until seven o'clock. As soon as I left camp I had to cross Thielsen Creek. It reminded me of some of the streams in the Sierra because it consisted of the snowmelt from Mt. Thielsen. 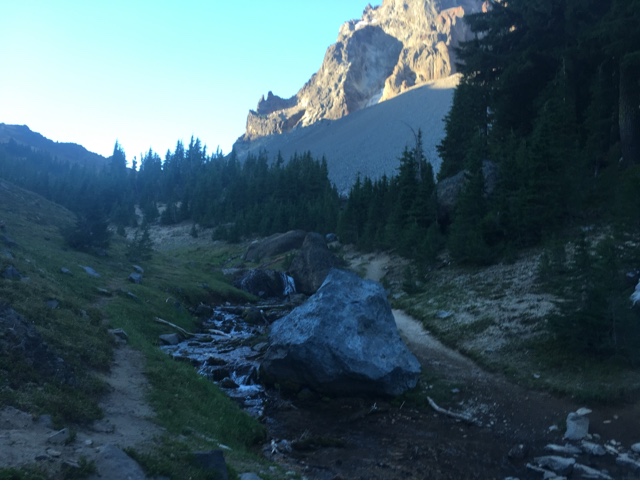 Thielsen Creek
The water from the creek was ice cold. I filled up from there last night before I started dinner. Shortly after starting my day I hit the highest point on the pct for Oregon and Washington. From here on out I will be hiking below 7,560 feet. 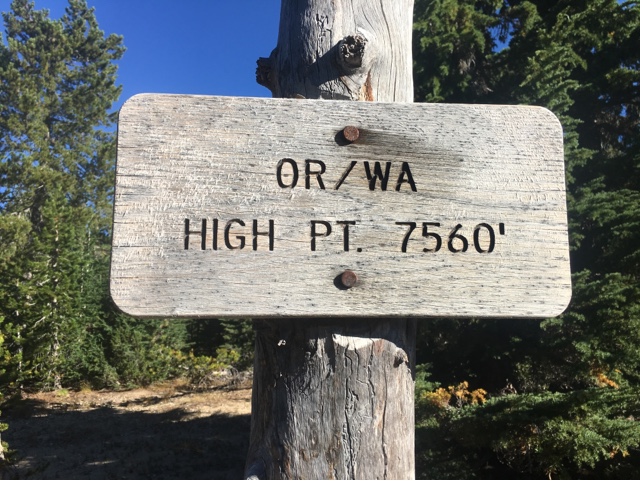 Gone are the days of high elevation 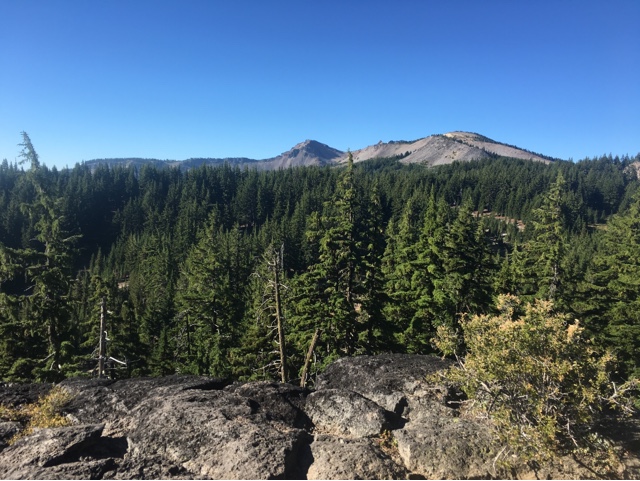 View from the highest point on the pct for Oregon/Washington(not exactly awe inspiring)
Once again it was really chilly this morning. I sent home my hiking pants in Ashland. I bought a replacement pair, that I hope will fit better, but I won't get them for a few hundred miles. I've been relying on my rain pants to keep me warm in camp and in the mornings. They have been working out really well. I'm beginning to wonder if I really even need the new hiking pants. I've been carrying these rain pants since Mt. Laguna, roughly 1,820 miles ago, and I haven't really used them. I think I might have put them on one or twice in the desert when it was extremely cold out. It is a good thing they only weigh three ounces. I am shocked by how different the weather has been in the last few days. It is still pretty hot out during the day, although not as hot as N. California, but it has really been cooling down at night. I'm sure by the time I finish the trail the change of weather will be even more pronounced.
I saw several lakes today, but none were close enough to the trail for a swim. Plus there was a pretty stiff breeze that I don't think would have made a swim very enjoyable. 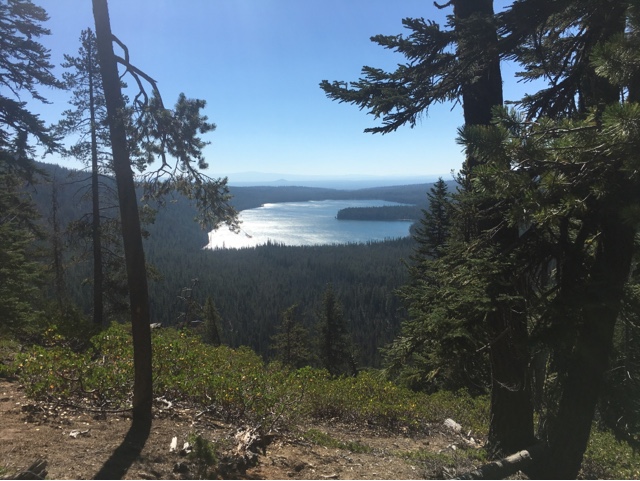 Crescent Lake
I didn't take very many breaks today. I have gotten into the habit of taking breaks at water sources, but the trail was pretty dry again today. I had planned on stopping for water at the sixteen mile mark, but I still had one liter left when I got there. The next water was eight and a half miles away. It was a tough decision. I couldn't decided if I should fill up or push to the farther source. In the end my laziness won out. The first water source was .4 miles off trail and down a very steep slope. The second water source was only .1 miles off of the trail with almost no elevation loss. The decision to move to the farthest water source was also made easier by the appearance of, Mozart. He needed water right away and was going down the steep slope for some. Since he was filling up he was kind enough to give me a quarter of a liter. That was all I needed to ensure that I didn't run out before the second source.
Once I got to the next water source I regretted my decision to skip the first one. It was the worst water source that I have been forced to collect from. I was so glad that I decided to keep my Sawyer Squeeze as a back up. The water report that I check to make sure a water source isn't dry described it as a pond. The report was only six days old. I could tell that it was a pond at one point in time. Now it was just one muddy puddle and one tiny bug infested pool. There were cow, horse, and dog prints in the mud around the tiny pool. Unfortunately, I did not have a choice, I had to filter water from there. The next source was where I planned to camp, 9 miles away. 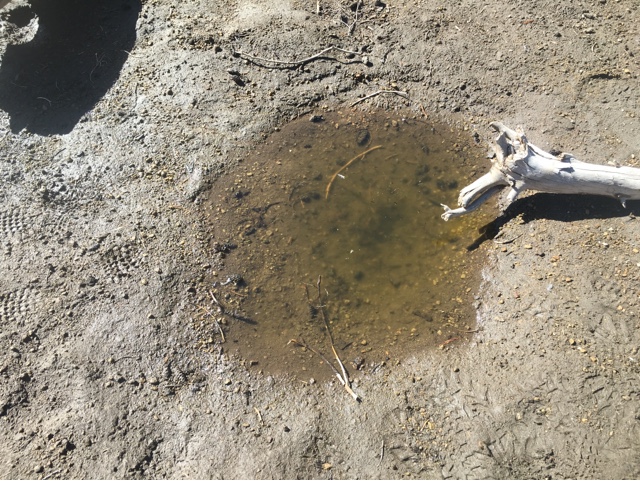 Tasted better than it looked
I drank half a liter of the warm, but clear water. Once I filtered it it was fine. I remember having to drink the yellow water in New York and New Jersey. At least this came out clear, even if the source was yucky. I carried a liter and a half with me to hold me over until I got to camp. I was hoping that I wouldn't have to drink it all and the water I would collect at camp would be better.
I had a bunch of nice views during those last nine miles. I'm really enjoying hiking in Oregon. I spend a lot of time in the shade of the forest, but every once in awhile I pop out into the open and get a great view. It is like the perfect mix of the AT and PCT. Easy hiking, shade from the trees, and good views. 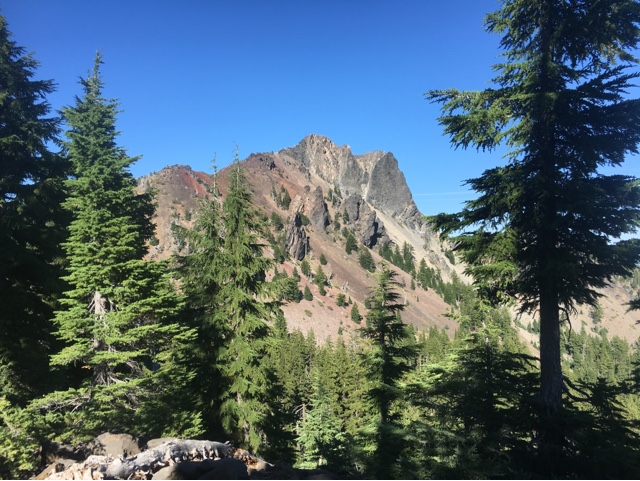 Clear shot of a cool mountain 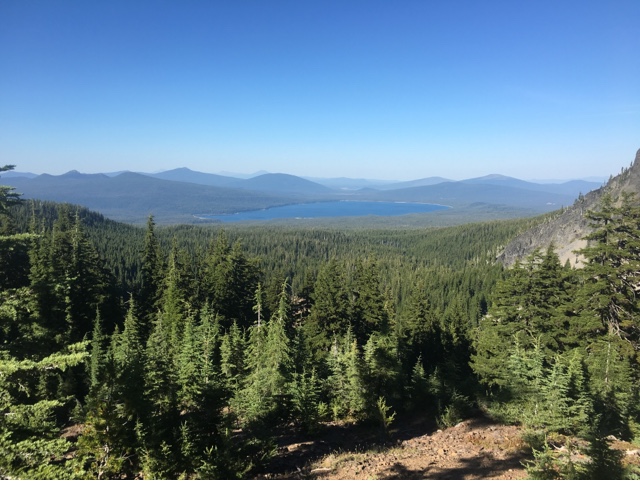 Huge lake in the distance
Around mile twenty eight I began to run out of steam. My feet were sore and tired too. I knew it was going to be a struggle to set up camp before darkness descended upon me. I also knew what I really needed were some calories, but I had already finished my daily snack allotment. Just as I discovered that I was out of snacks I came across a trail junction. Someone had left their snack bag behind. I can't imagine that it was a thruhiker. I'm guessing it was a day hiker or section hiker that dropped it along the trail and someone picked it up and put it on the trail junction sign. I culd be wrong, but I was just happy to get some more free food. The trail definitely provides. 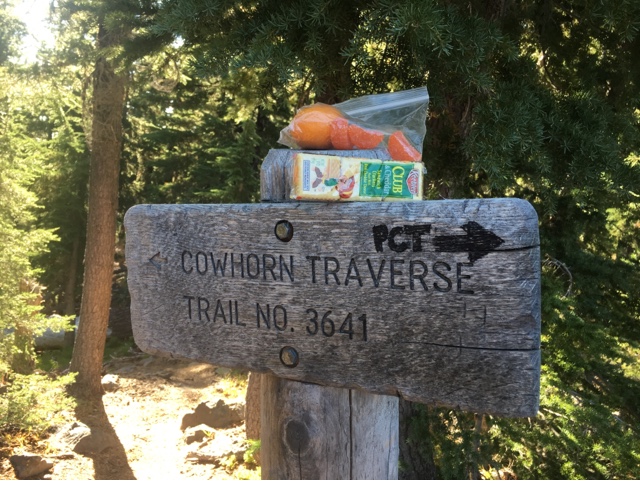 I took the crackers(sealed package mom)
This gave me just enough energy to make it to the lake that I am calling home for the night. I was more than a little dejected when I got to the tentsite and discovered that it was taken by a man, his girlfriend, their truck, a huge 10 person tent, and a vicious dog. I skirted around the dog, while the owners held him back, to collect water from the lake. There was no way I was going to camp here. I asked if they knew of any other campsites in the area. They told me there were a couple more along the lake. I hurriedly pushed on so I could setup before dark. Just as I started cooking dinner the couple and the dog stopped by. They felt bad about the dogs behavior and wanted to make amends. They brought me a Coke, ginger ale, and blackberry Izze. I was so thankful to have not one, but three cold beverages that I didn't even care about packing out the cans. The guy said he is a backpacker and understands about having to pack out trash. He told me to just leave the cans next to my campsite and he would pick them up on their way out. Thanks for having a vicious dog that lunges at people. Without him I wouldn't have enjoyed three ice cold beverages with my dinner. Speaking of dinner, I enjoyed one of my AlpineAire dehydrated meals that I received in my PO box. Thanks Jodi for for dinner. The chicken burrito bowl was delicious! 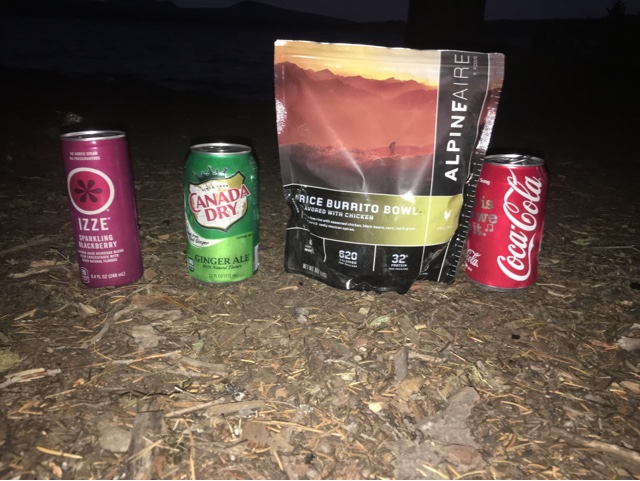 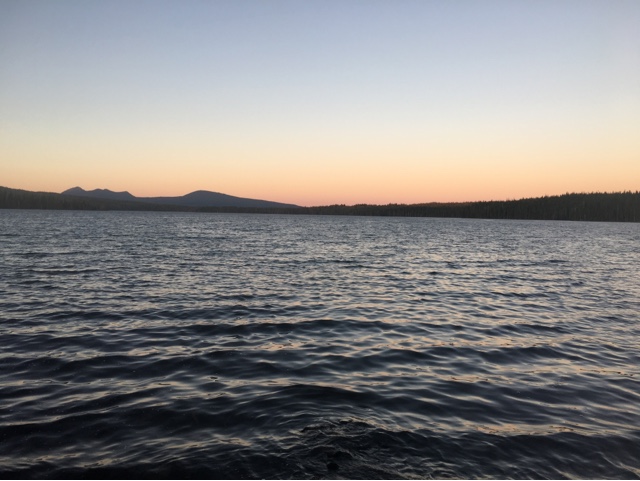 Setup just in time for sunset
"In life you can never be too kind or too fair; everyone you meet is carrying a heavy load. When you go through your day expressing kindness and courtesy to all you meet, you leave behind a feeling of warmth and good cheer, and you help alleviate the burdens everyone is struggling with."
- Brian Tracy
Posted by Yoda at 10:14 AM