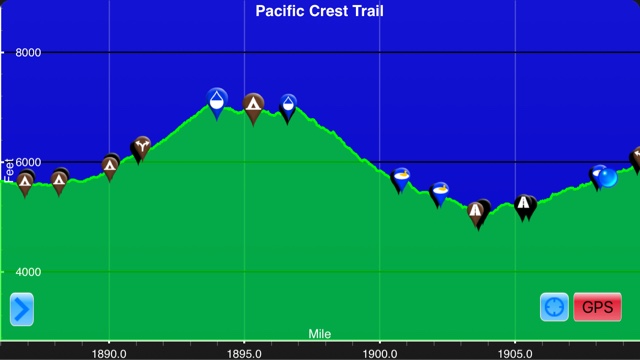 Total up/down:+2,789/-2,649 feet
I was lucky enough to witness the sunrise over yet another lake. While it wasn't as majestic as Crater Lake it was still nice. I really wanted to go back to sleep this morning, but I forced myself out of my tent. I only had to hike seventeen miles before I would reach Shelter Cove Resort. I had a mail drop being delivered there today. I figured that it wouldn't be delivered until after two o'clock. I didn't see the point of rushing to get there and then waiting on my box. I was going to take my time packing up. I even thought about making some coffee, but the mosquitos were atrocious. I hurriedly packed up and headed out around 6:45. 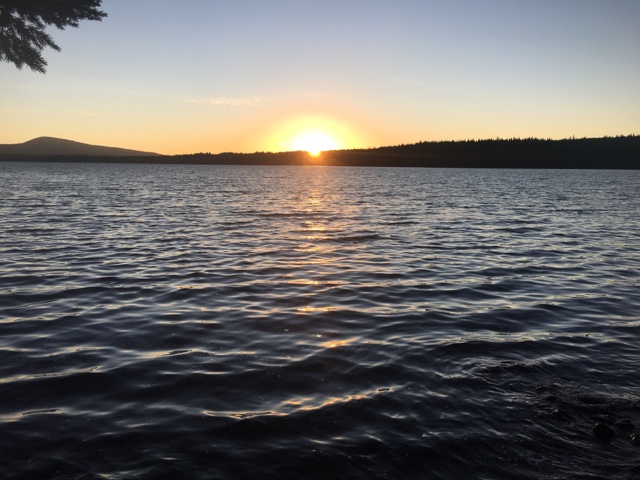 Sunrise over Summit Lake
I warmed up pretty quickly after leaving camp due to a nice extended climb. It was pretty gradual and I made it to the top without expending too much energy. I had a nice view from the top and as a bonus I had cell phone reception. I checked to make sure my resupply box was going to be delivered on time. It was listed as out for delivery. I downloaded Harry Potter and the Deathly Hallows before pushing on. I'm not sure what I'm going to listen to once I finish Harry Potter. 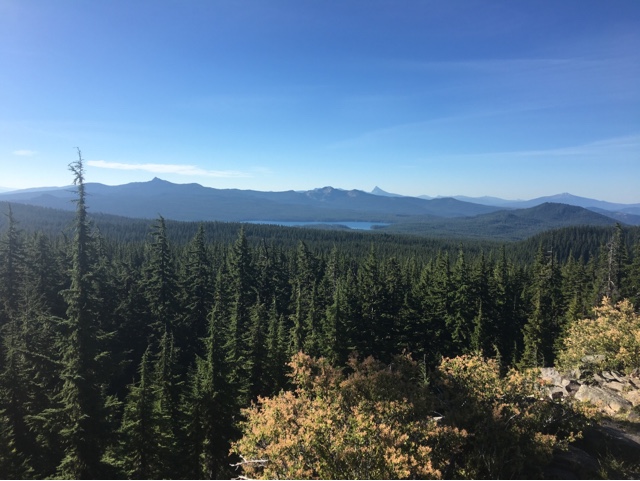 Big lake in the distance
I expected to drop back down below the tree line and to hike though the forest for awhile. Instead the trail meandered through an area that reminded me of the Sierra. There was even an amazing stream I had to rock hop across. I decided that this was a good place to stop and have second breakfast. I had a few Oreos, a poptart, and drank the blackberry Izze from last night. 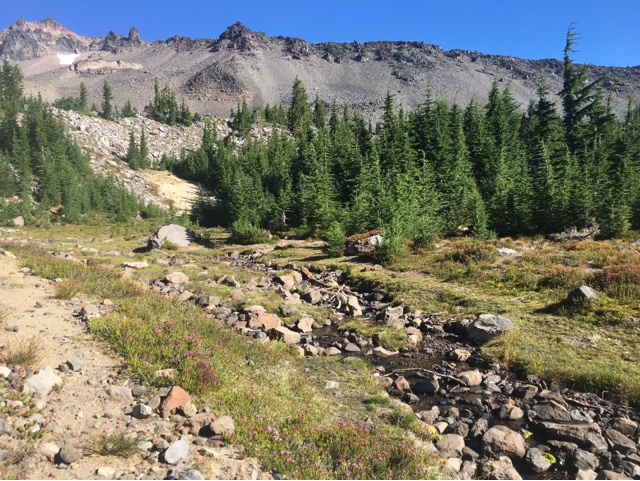 Very Sierra-ish
After leaving here the trail dropped back into the cover of the trees. I was soon lost in my own thoughts. For some reason I stopped to look at my Guthook trail app. I'm not really sure what prompted me to check it. I didn't need to know where the next water source was. I had just filled up water from the stream. It was a good thing that I checked it though. I was only a quarter of a mile away from 1,900 miles. I had completely forgotten that I was going to cross that milestone before Shelter Cove. I looked around for the mile marker, but there wasn't one. I dropped my pack and started looking for materials to make my own. There was an uprooted fern tree close by and a bunch of tiny pine cones. I put them to good use. 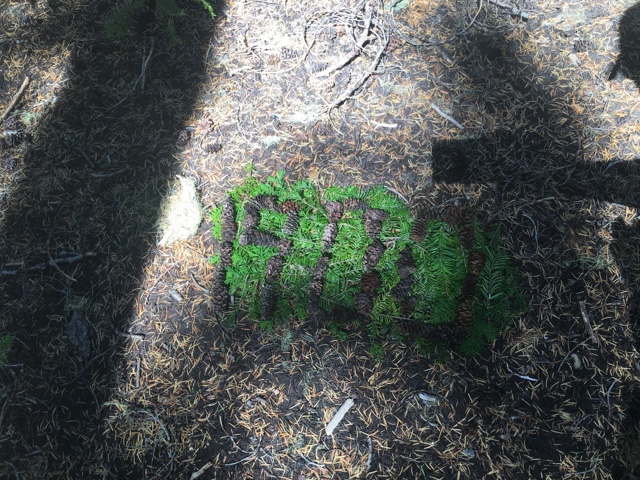 1,900 miles complete
After making the sign and taking pictures, I hurried on. I only had four more miles to hike until I reached the trail junction for Shelter Cove. The resort was almost two miles off of the trail. Unfortunately, there wasn't a way to hitch in. I have to walk it. My plan was to pick up my box, sort my food, shower, do laundry, and head back out to the trail. I was pleased to find out that my package had arrived minutes before me. I had timed it perfectly. Unfortunately, the washer was already in use and three other people were waiting ahead of me. I decided to skip laundry. I also skipped taking a shower. They were charging $1.50 per three minutes. I bought a Gatorade and began sorting and repackaging my food. I decided to buy lunch at the store, but they didn't have much to offer. I decided to buy a few hotdogs. I figured that I could easily eat two, if not more. They were really big hotdogs. Instead of being served on hotdog buns, they were served on hoagie rolls. I could barely finish them. While I waited for my external battery pack to finish charging I repacked my pack and chatted with Mozart and Strider. I was just getting ready to leave when two of my friends from the AT, Cap and Spice, showed up. I thought that they were hundreds of miles ahead of me. It turns out that they had taken some time off of the trail for a few speaking engagements(Cap and Spice are the founders of Packing It Out). I was delighted to see them again. The last time we crossed paths was at Hiker Heaven. Eventually I had to leave though. I still had a few more miles to hike.
I walked the 1.8 miles back to the trail. I passed by more Thimbleberry bushes. I spent a few minutes collecting berries to eat for dessert after dinner. 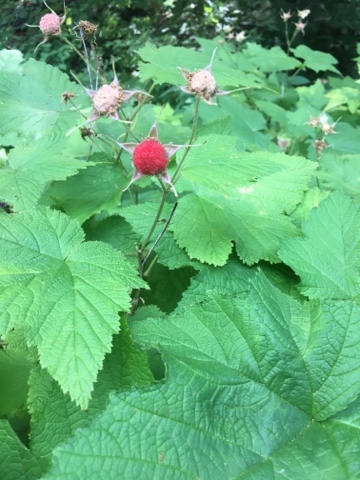 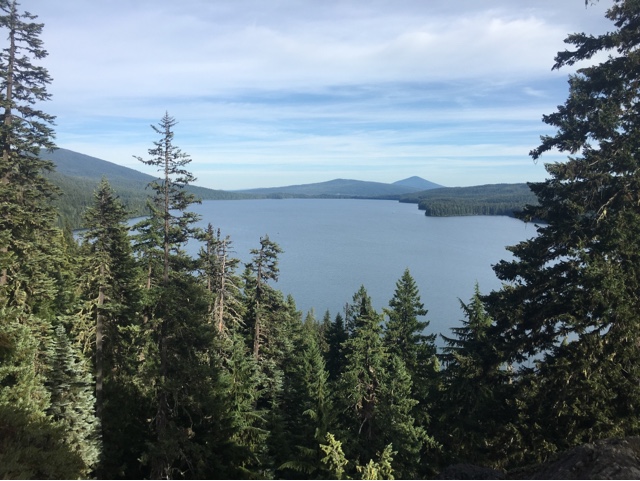 The lake that Shelter Cove is one
I made it into camp around seven o'clock. It was nice to have a little bit more time in camp. I have been hiking until almost 7:30 for the last few days. I managed to find a nice spot on another lake. I took advantage of the lake to wash my socks and running shorts. It wasn't the same as doing laundry, but it was better than nothing. I also rinsed off the dirt and grime on my feet and legs. It is always a nice feeling to get into my sleeping bag after rinsing off. I watched the sunset and was in my sleeping bag shortly after. 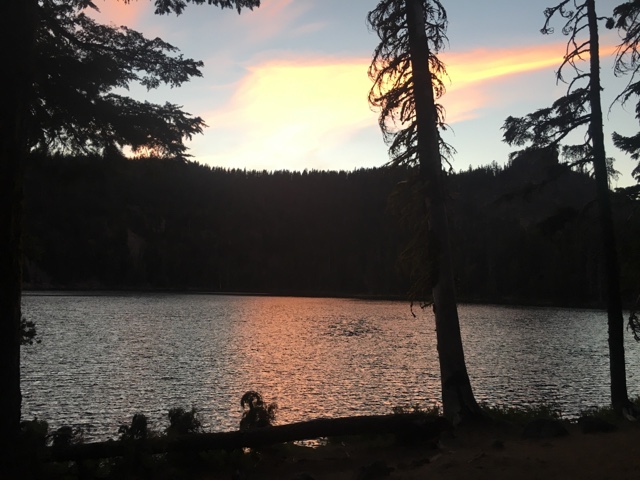 Two nights in a row next to a lake
“The stillness of the early morning scene enables me to take in and enjoy many things which pass me by during the bustle of the day."
– Rosemary Verey
Posted by Yoda at 8:13 AM