It was really cold when I got up this morning. I bet it was in the 30’s. It hasn’t been this cold in a long time. I really didn’t want to get out of my sleeping bag, but I had a tight schedule if I wanted to get everything on my list accomplished. I played around with the order of operations for my new morning routine. I was out of camp a little bit faster. The first thing I did after getting up was retrieve my food bag and pack. This saved me a lot of walking back and forth between the food prep/hang area and my tent. I had to walk close to a mile before I made it back into the cdt. On my way out I got a nice early morning view of the lake. 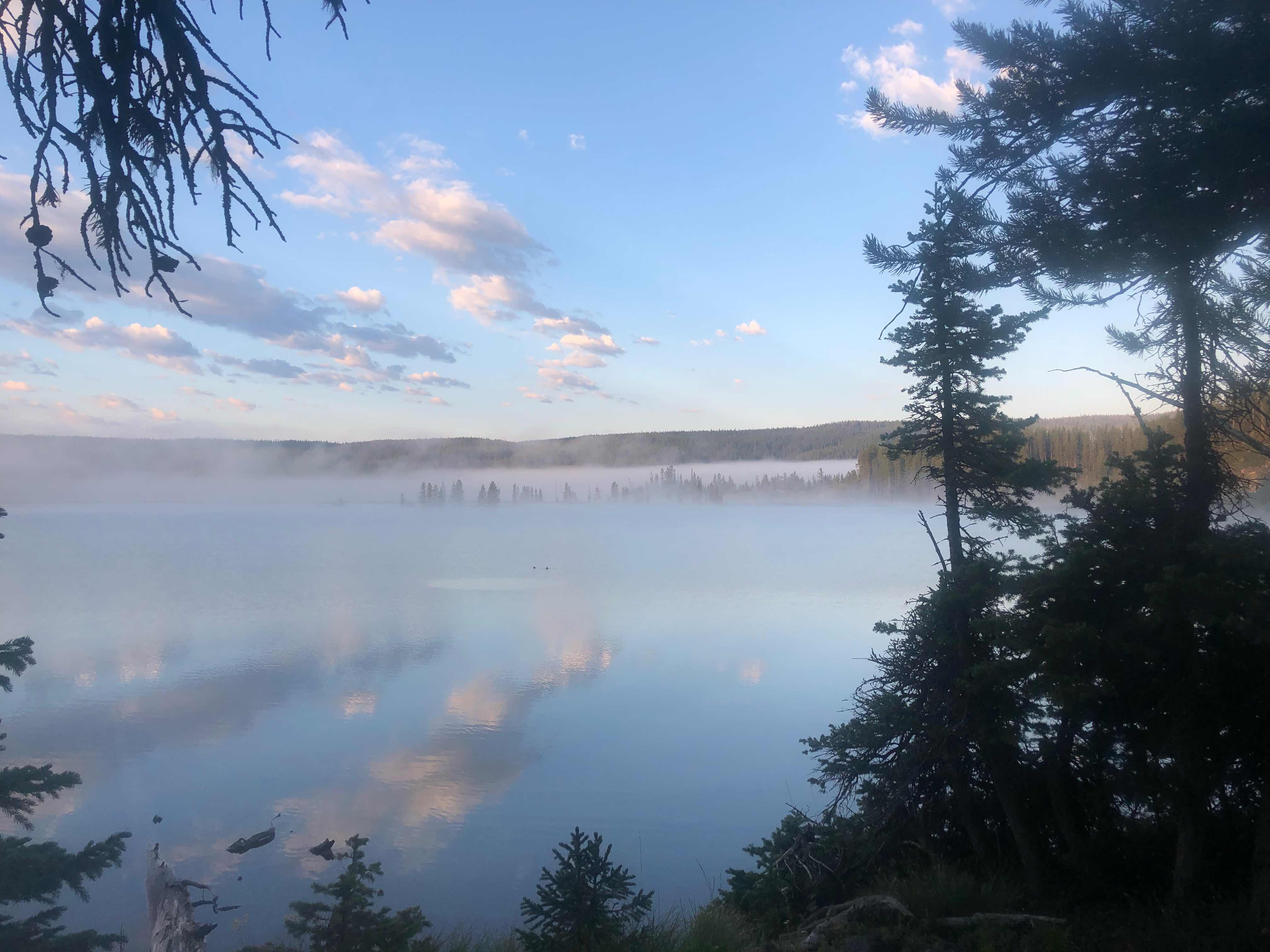 Cool lake view
I ran out of food last night, so I was hiking pretty quickly to get into town for the AYCE breakfast buffet. All that stood between me and heaping piles of food was one geyser. Lone Star Geyser was located about a quarter mile off trail, but everyone said it is worth the hike. It goes off every three hours and I was pretty sure that I needed to be there by 9 to see it. The hike was once again tourist grade. I’m really loving this easy trail. It is easy to make miles. I had one stream crossing and once again my feet got wet. Hopefully this wet feet trend doesn’t continue for much longer. It has gotten really old.
I made it the 6.5 miles to Lone Star Geyser in two hours. I only had to wait ten minutes before it began to erupt. My first geyser experience was incredible. There was only three other people there, a purple and their mother from Portland. We struck up a conversation and they seemed pretty impressed that I was hiking the cdt. Lone Star erupted for almost forty minutes and shot steam and water forty five feet into the air. When viewed from a certain angle there was a rainbow created by the water vapor surrounding the cone. I hadn’t seen Old Faithful yet, but I didn’t think it could beat this experience. Getting to see something like that in the middle of nowhere with only a few other people around was amazing. 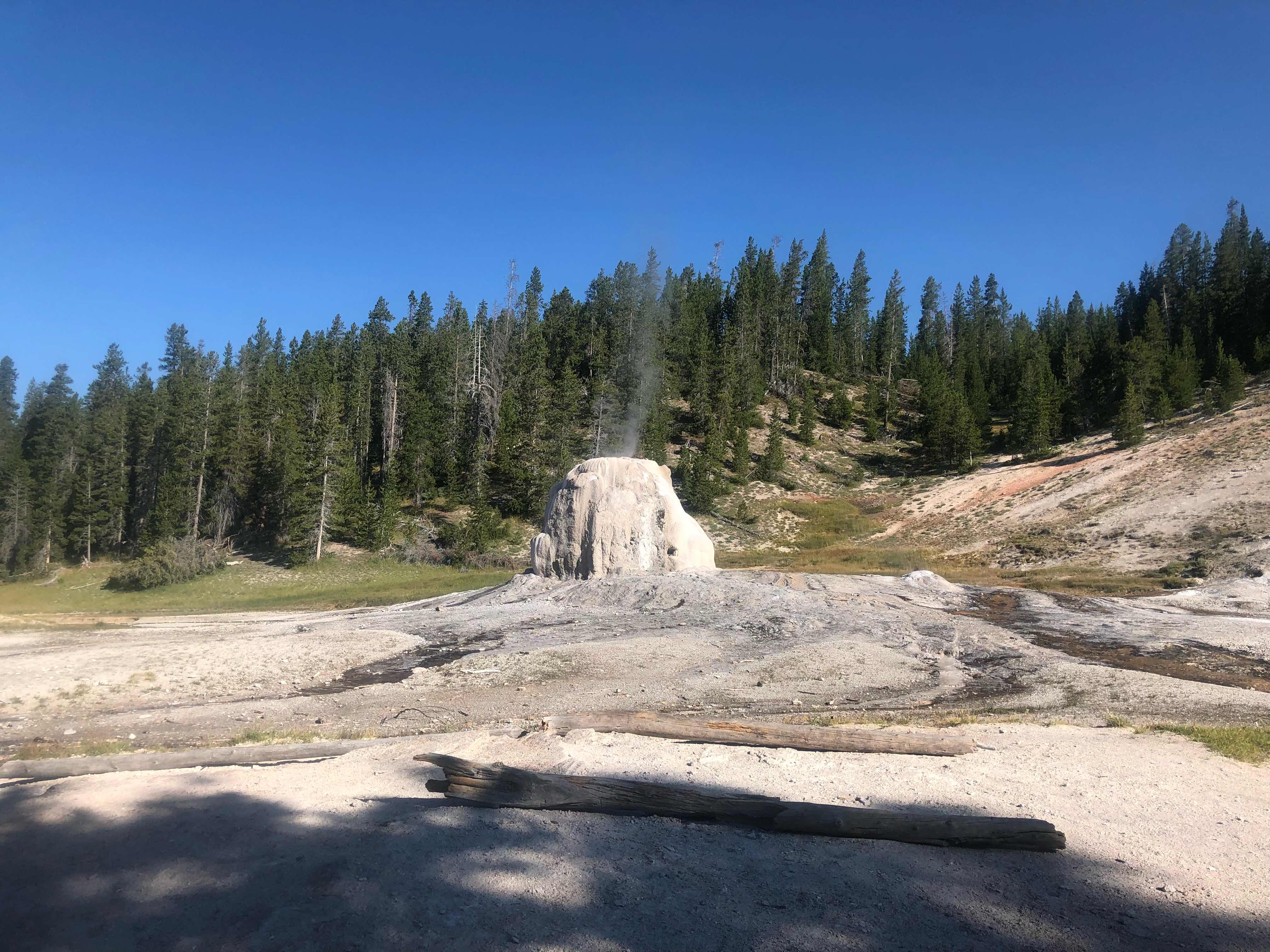 Lone Star before the eruption 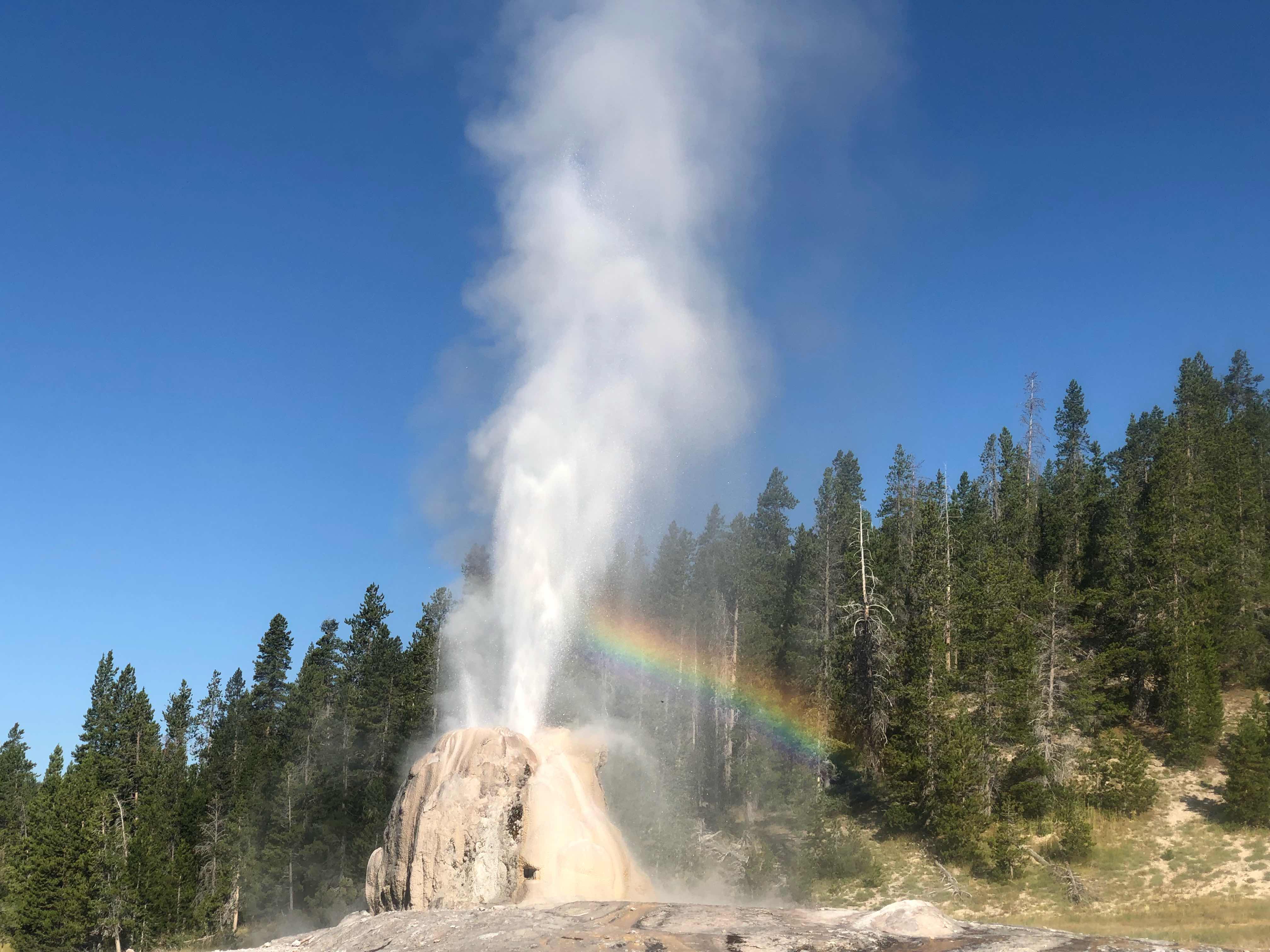 Rainbow during the major eruption
I hadn’t realized that the geyser would go for so long. I still had to hike four miles to make it to Old Faithful Inn for the breakfast buffet. I gladly traded an AYCE breakfast buffet to see this geyser. Plus, I knew that they also served a lunch buffet. John, Sue, and their 80 year old mother offered to give me a ride into the village from the trailhead. Such nice people! I walked down to the trailhead with another the couple. They had arrived just as Lone Star finished. The husband had hiked the PCT a few years ago. We had a great conversation the 3.5 miles to the parking lot. We even saw a coyote on the way. Once we got to their car they gave me some carrots and cherries. Since I was starving this was a great treat. 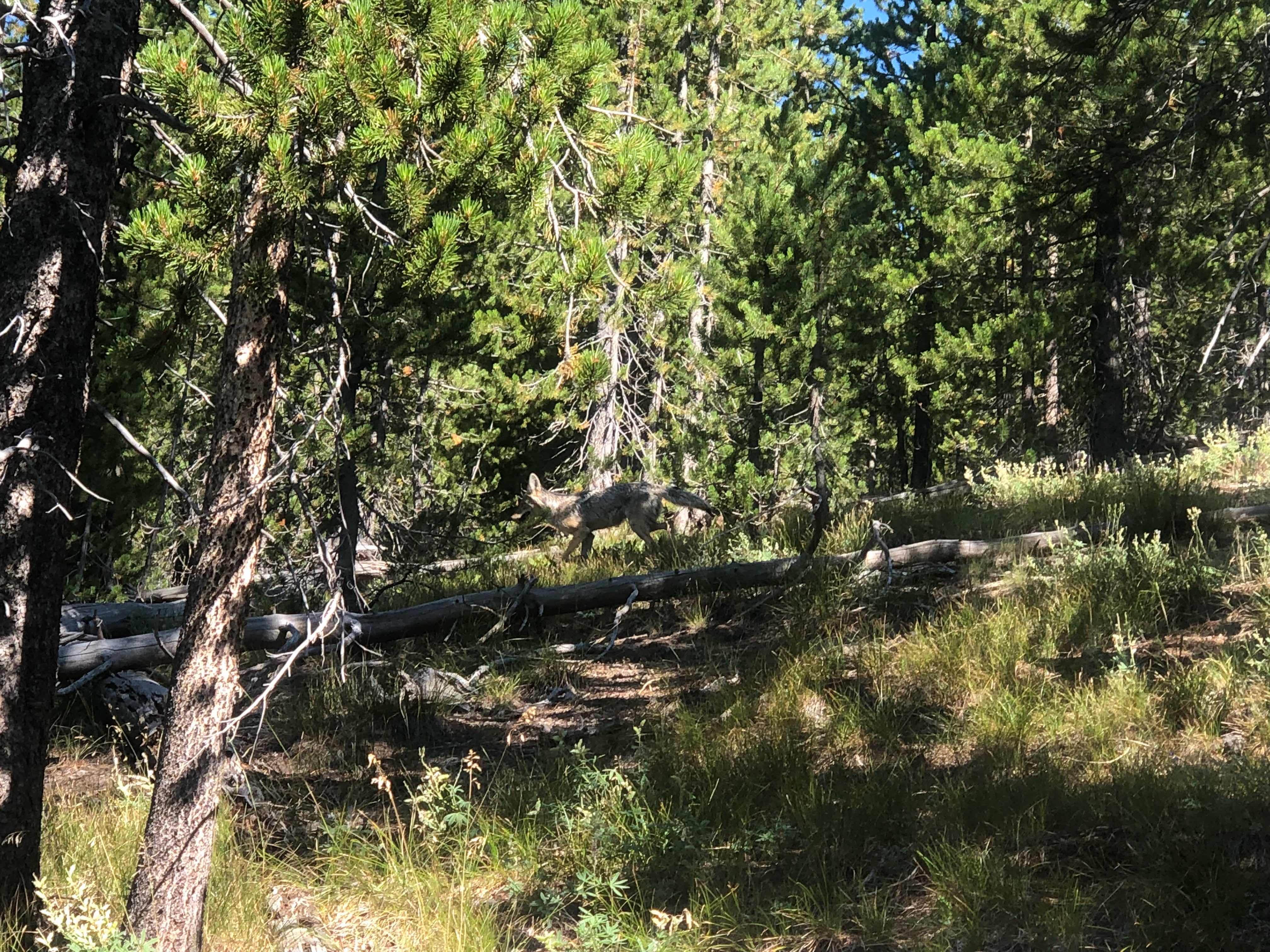 Wylie Coyote
John, Sue, and their mom showed up a few minutes later. True to their word they gave me a ride to the inn. I really hope that they enjoy the rest of their summer vacation. I missed breakfast by just a few minutes. I wasn’t all that upset. AYCE lunch buffet was just as good. The Inn has an area for nonguests to be able to shower. For five dollars I was able to get a towel and wash cloth. The shower was fantastic. They had body wash, shampoo, and conditioner. The water was hot and the water pressure was perfect. By the time I was cleaned up the lunch buffet had started. The food was just ok, but there was a lot of it. I had four heaping full plates of pulled pork, bison brautworst, baked beans, wild trout, corn bread, macaroni salad, green salad, and an Oreo brownie. I also had five cups of coffee and a Bloody Mary. I was uncomfortably full. 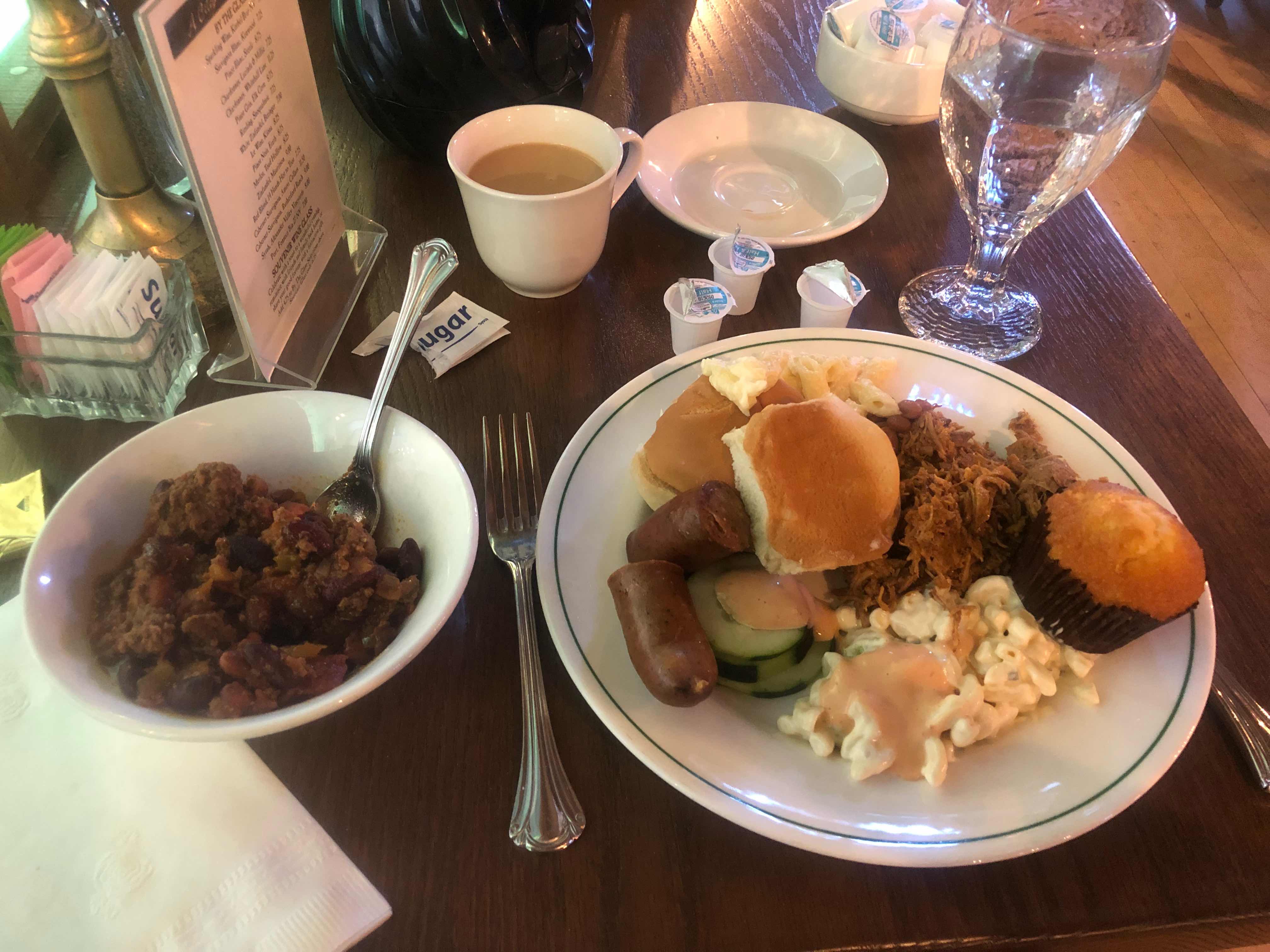 Plate number two
I had a great server named Kristen. I was telling her that I really wanted to spend more time in the park, but I still had to hike twelve miles to get to my designated campsite. She told me she had a friend in the employee RV lot and they would probably let me camp there. That would definitely solve the problem since there was nowhere else to stay in Yellowstone.To get lodging in the park you need to make reservations one year in advance. I really wanted to see more of the sites. I also still had to do laundry, pick up my resupply package from the P.O., find new socks(mine have holes), and get a full charge on my electronics(which can take up to eight hours). I really didn’t think I could do all of that and still make it to my campsite before dark. I gave Kristen my number and she said she would let me know about her friends RV spot.
I went in search of the post office. I found it and picked up my package with no problem. Then I went to find the ranger station. They have a cdt hiker trail register and my brother, sister-in-law, and niece had left me notes in it. It’s pretty cool that they were here a few weeks ago and my parents were here last week. My brother and his family even bought me my lunch today. Thanks for the awesome bday present, Anthony, Lauren, and Parker. 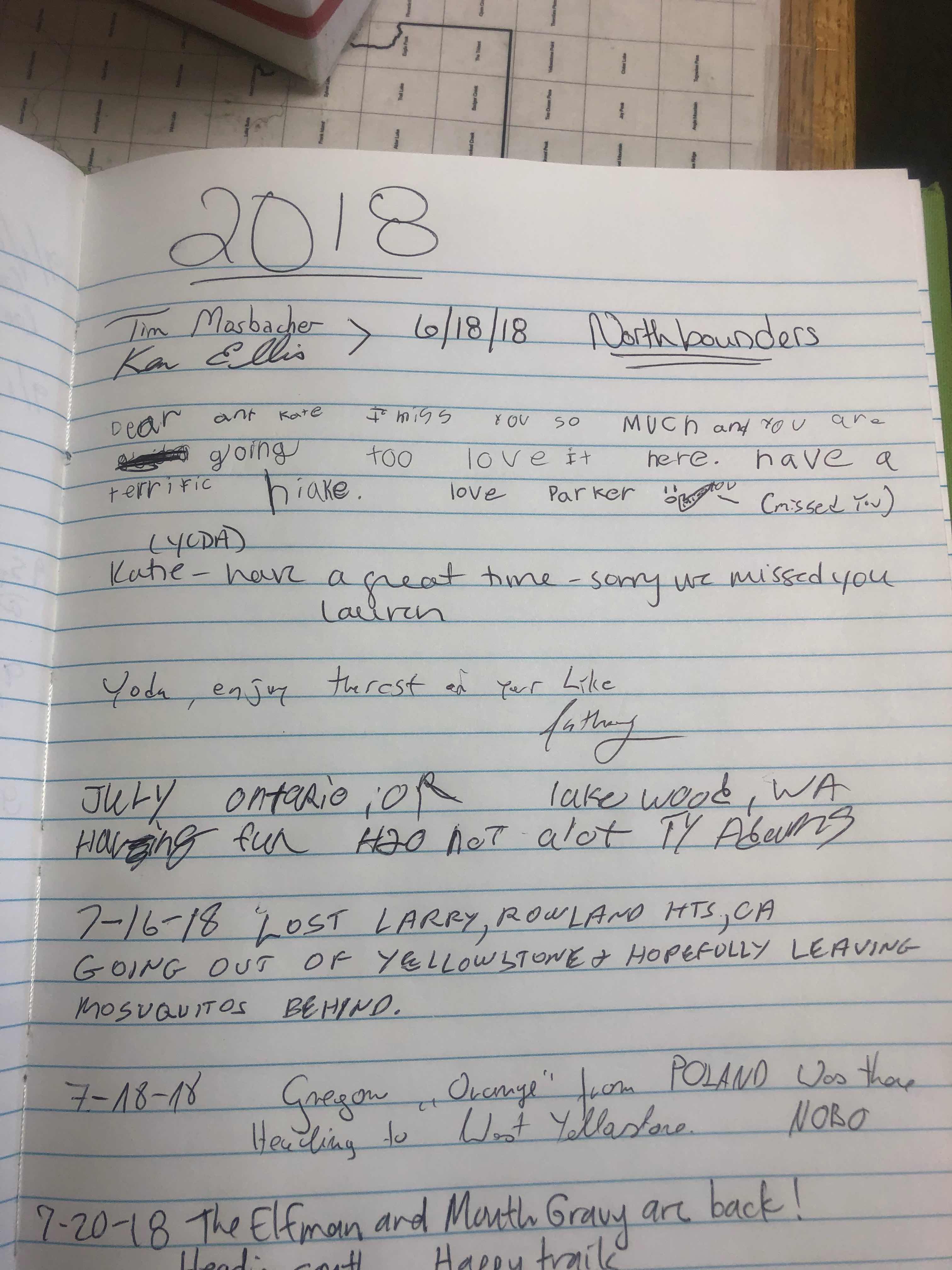 Notes from my family
My next chore was laundry. This proved a little more time than I would have liked. The Snow Lodge allows non guests to use their guest laundry facility. Two of the four washing machines were broken and the two working machines were in use. I sat in the hallway hiker trash style, bare feet and wearing my rain gear.  I got more than a few stares. Eventually I was able to get my laundry going. I chatted with a few other people doing their laundry. One lady even paid for my drier. Tourist in this park are easily impressed by thruhiking. I heard back from Kristen just after finishing my laundry. She had secured a spot for me with her friends Andrea and Eric. Score! It was already getting late in the afternoon and I still hadn’t seen any of the park. I found some Darn Tough socks at the general store and all of my tasks were complete. I left my pack with the front desk at the Inn and went to roam the Geyser Basin. I was just in time to see Old Faithful. It wasn’t as impressive as Lone Star, but it was cool nonetheless. 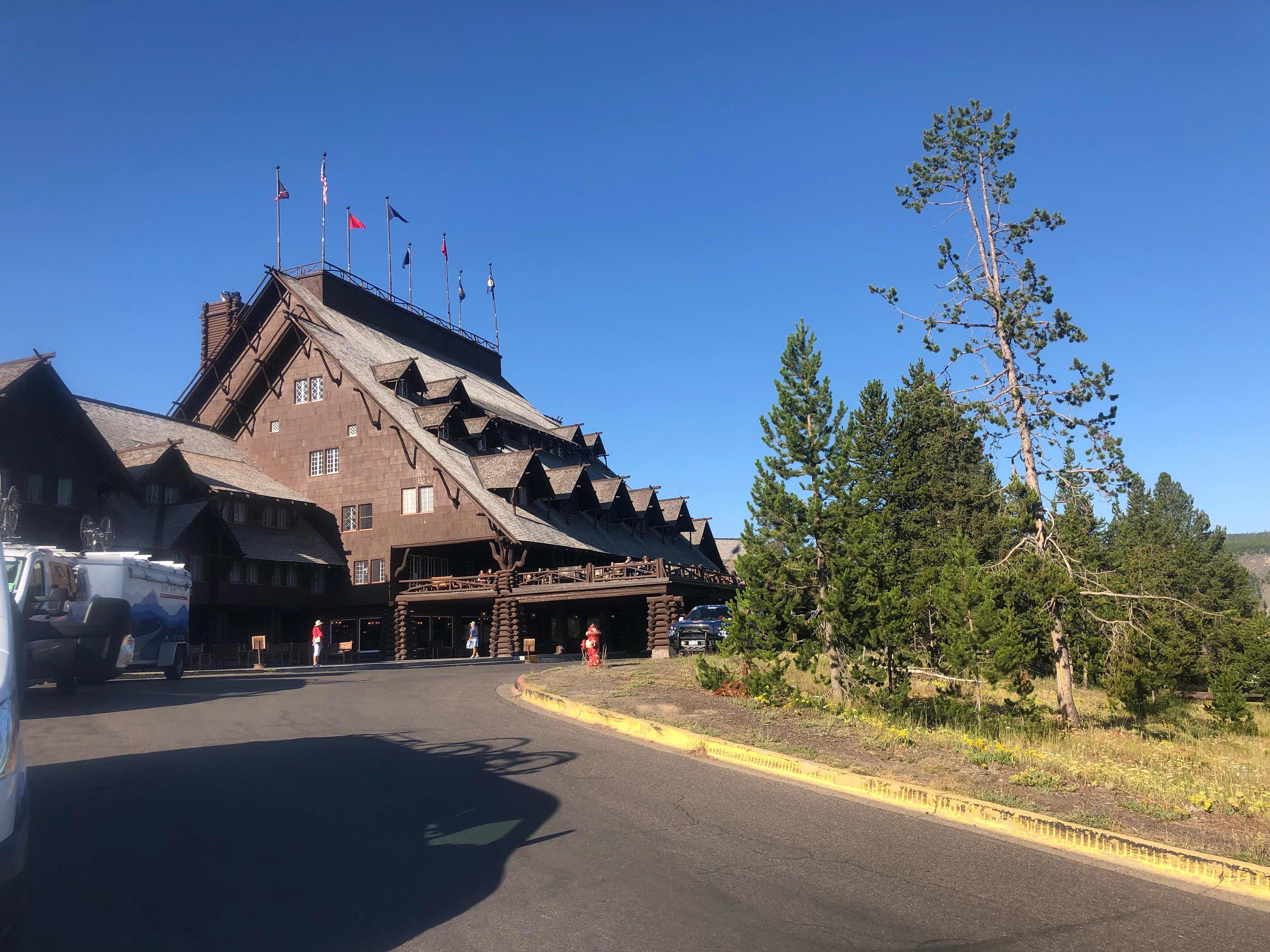 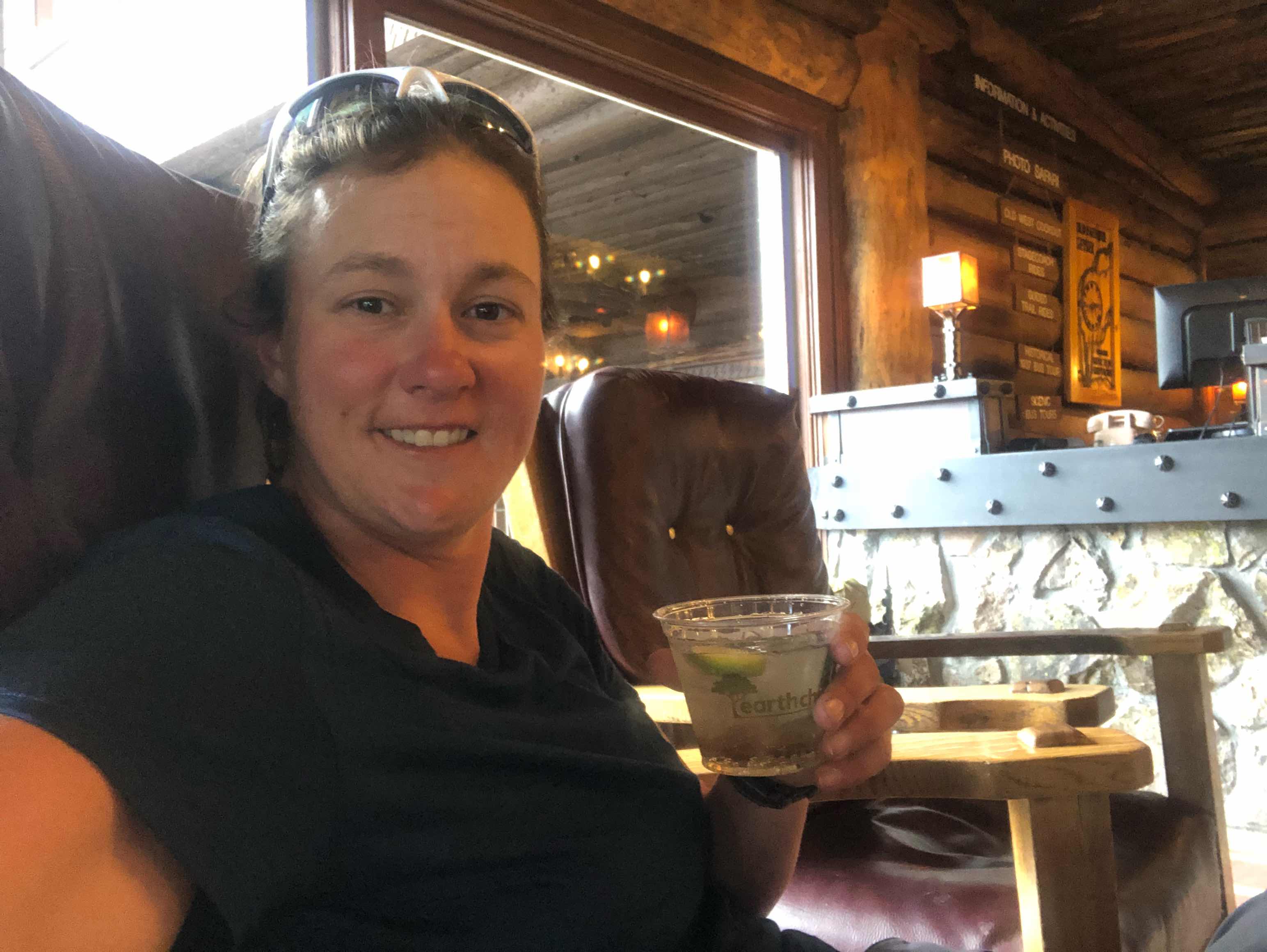 Enjoying a well deserved drink before doing the tourist thing 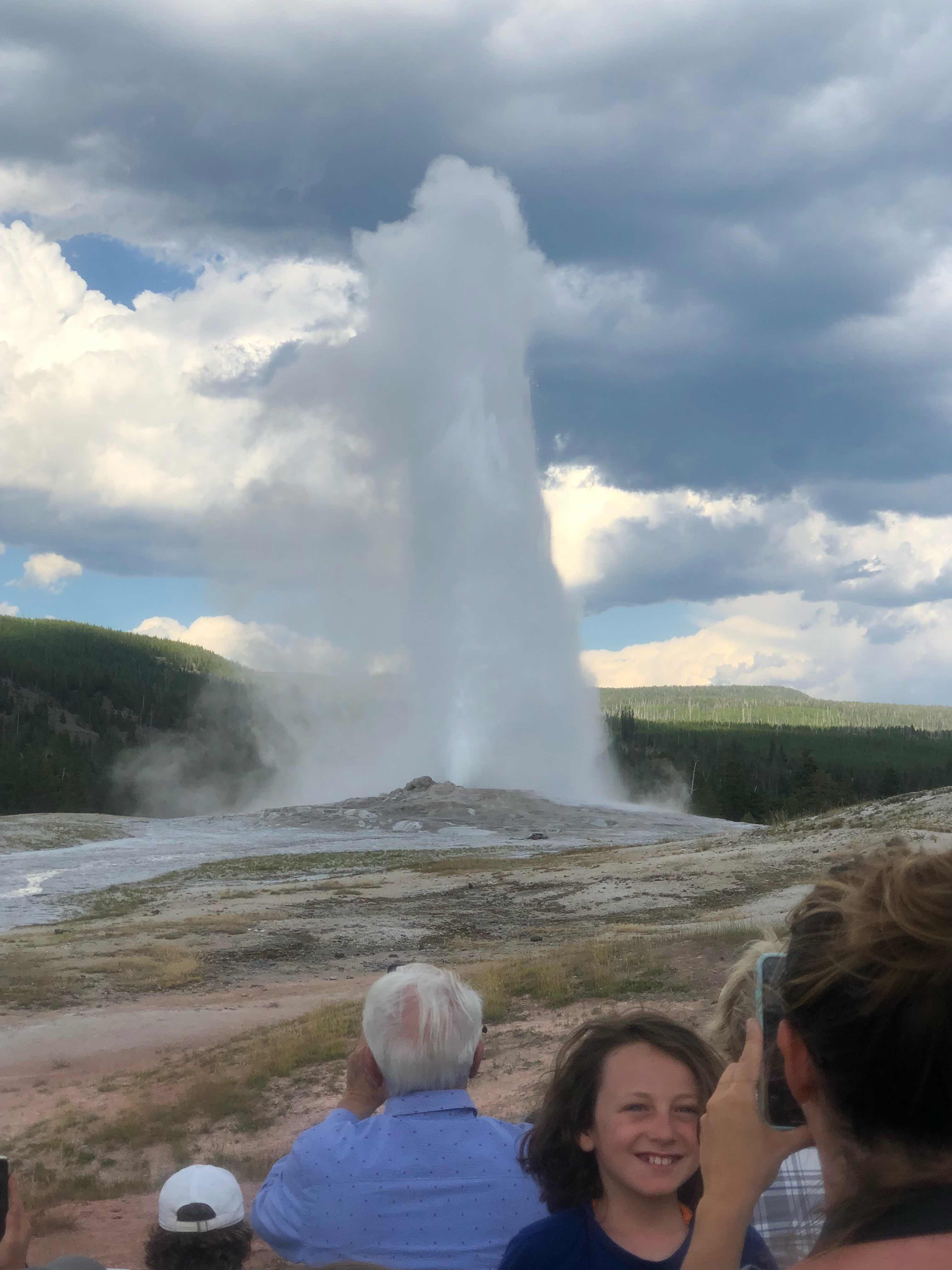 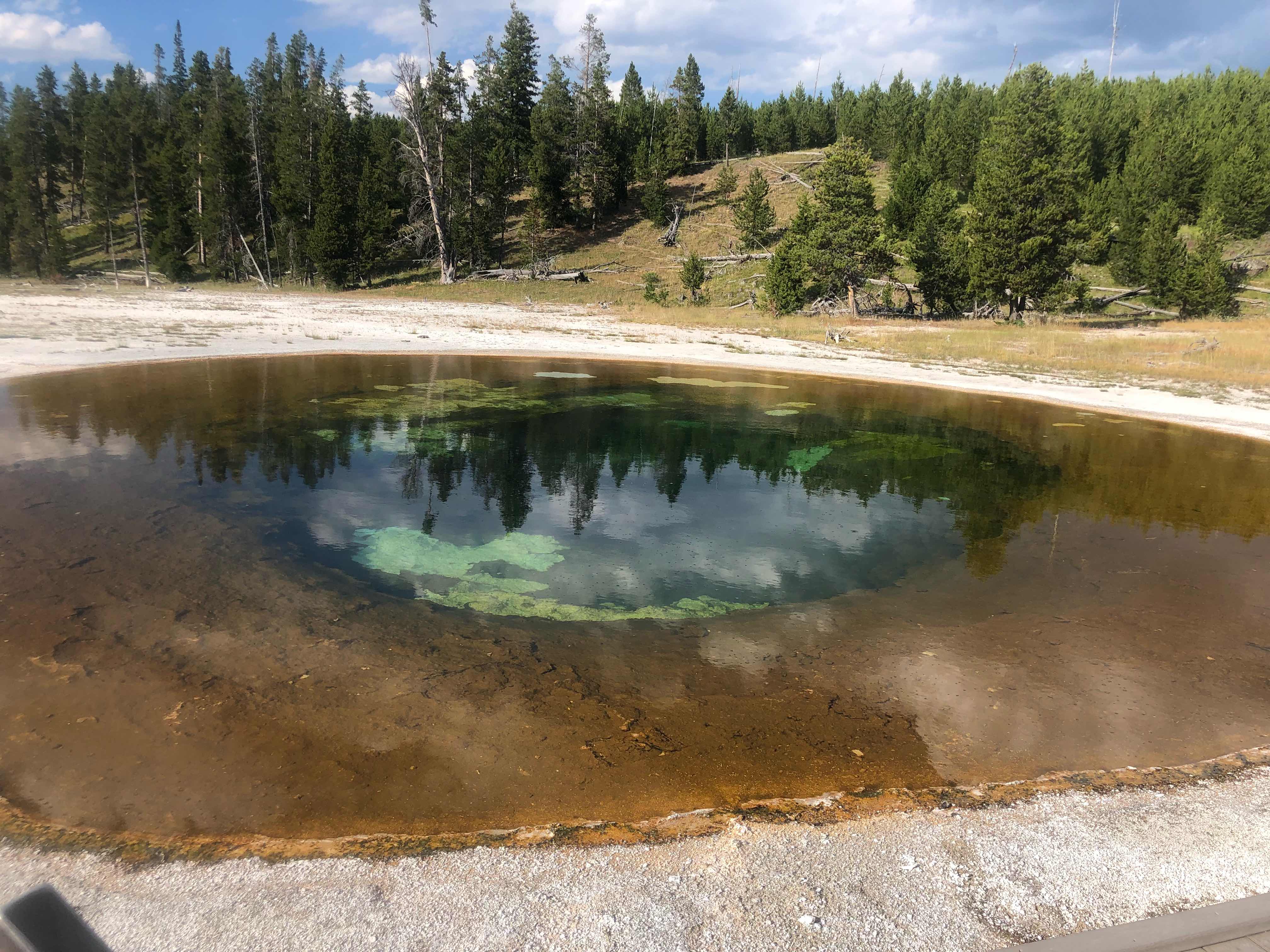 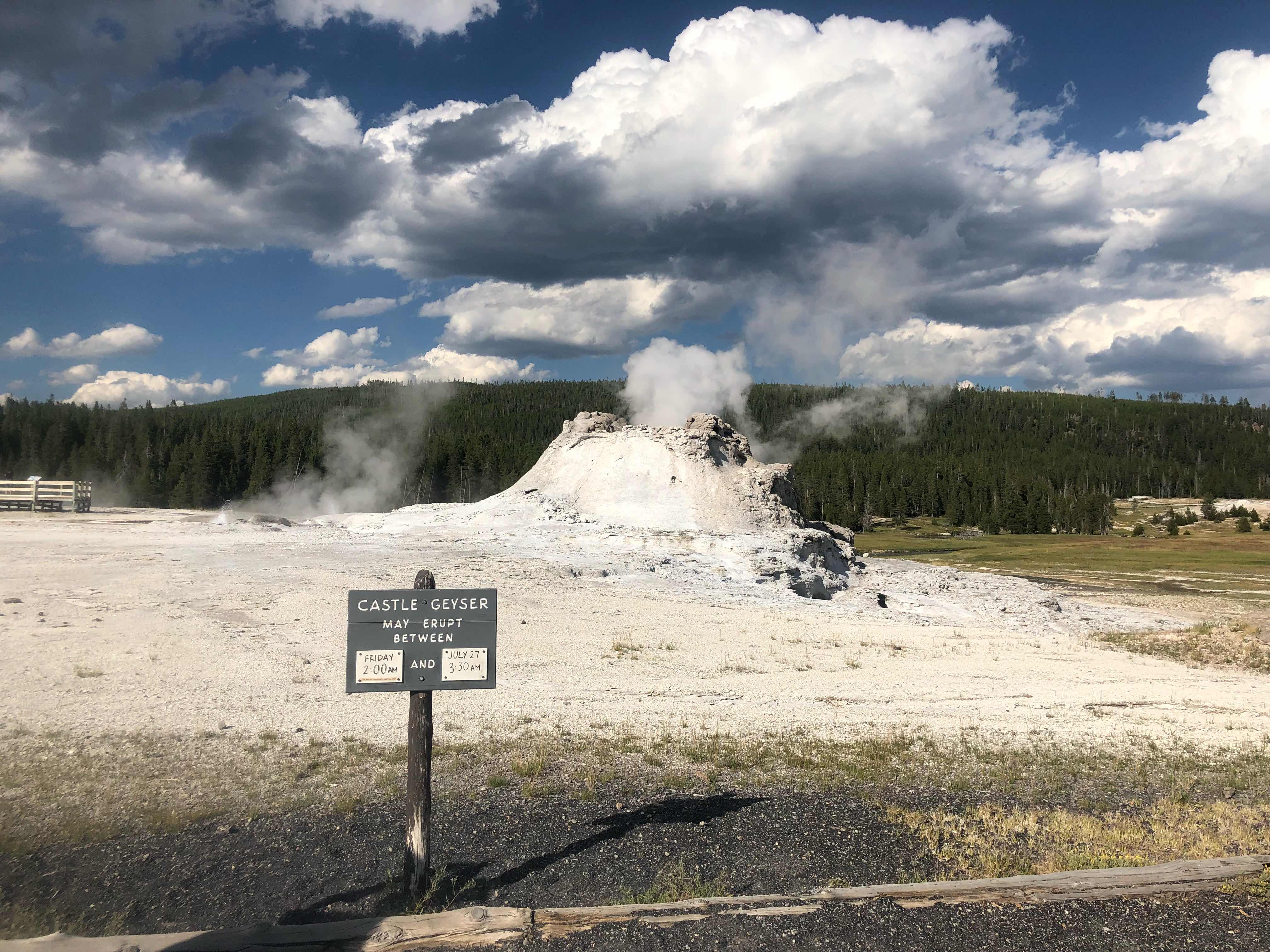 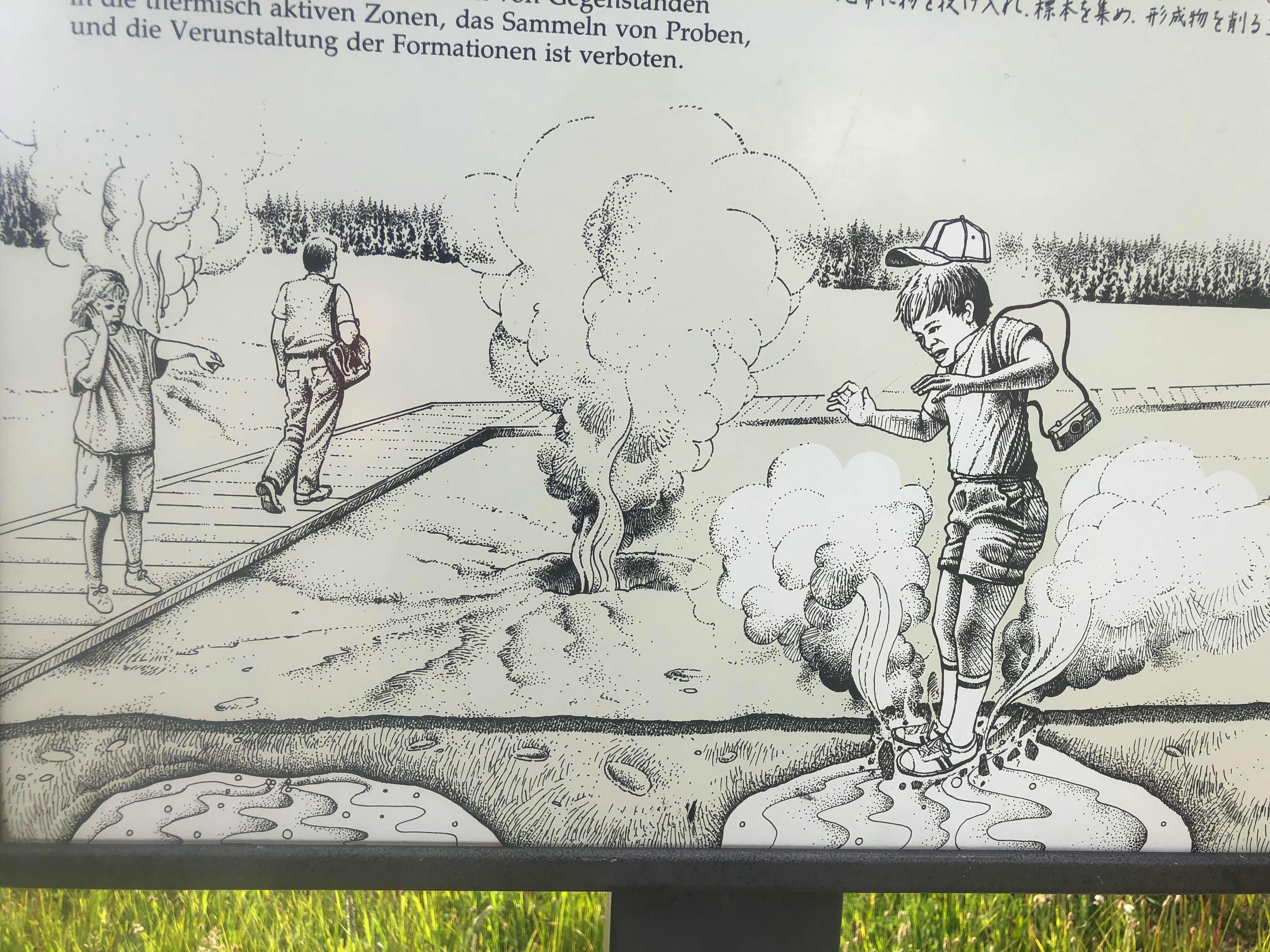 Don’t walk off the trail 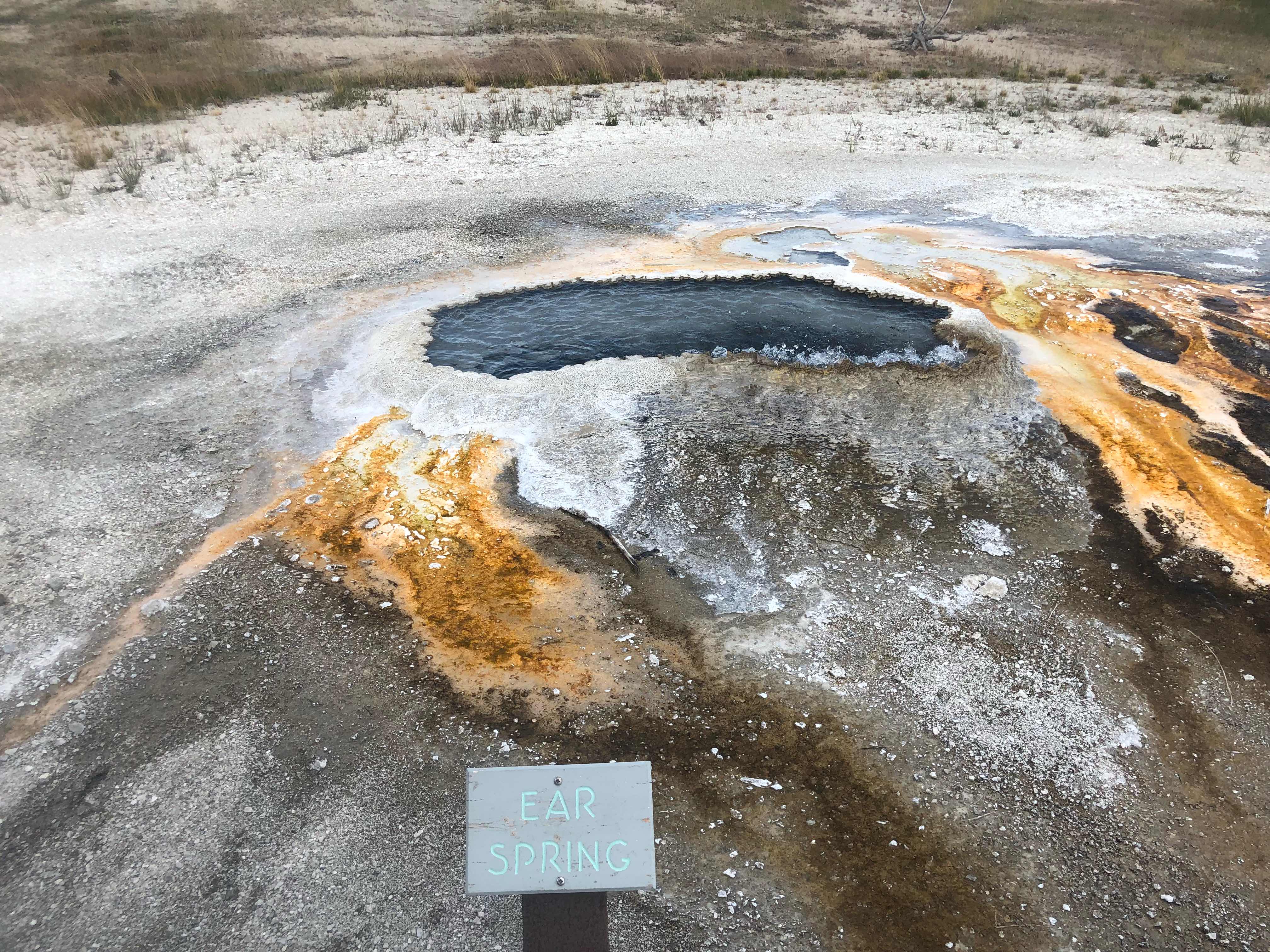 Looks like an ear
I didn’t come close to scratching the surface of seeing this wonderful part of our National Park system. I’ll definitely be back one day. After roaming around the Upper Geyser Basin for a few hours I went in search of dinner. After my massive lunch I surprisingly wasn’t very hungry. I went to the Bear Pit, the bar inside of the Inn, and had a small bite to eat. The staff was very friendly. When I asked how to find the employee RV area the bartender drew me a map. After dinner I had some ice cream. I was a little hungrier than I thought. 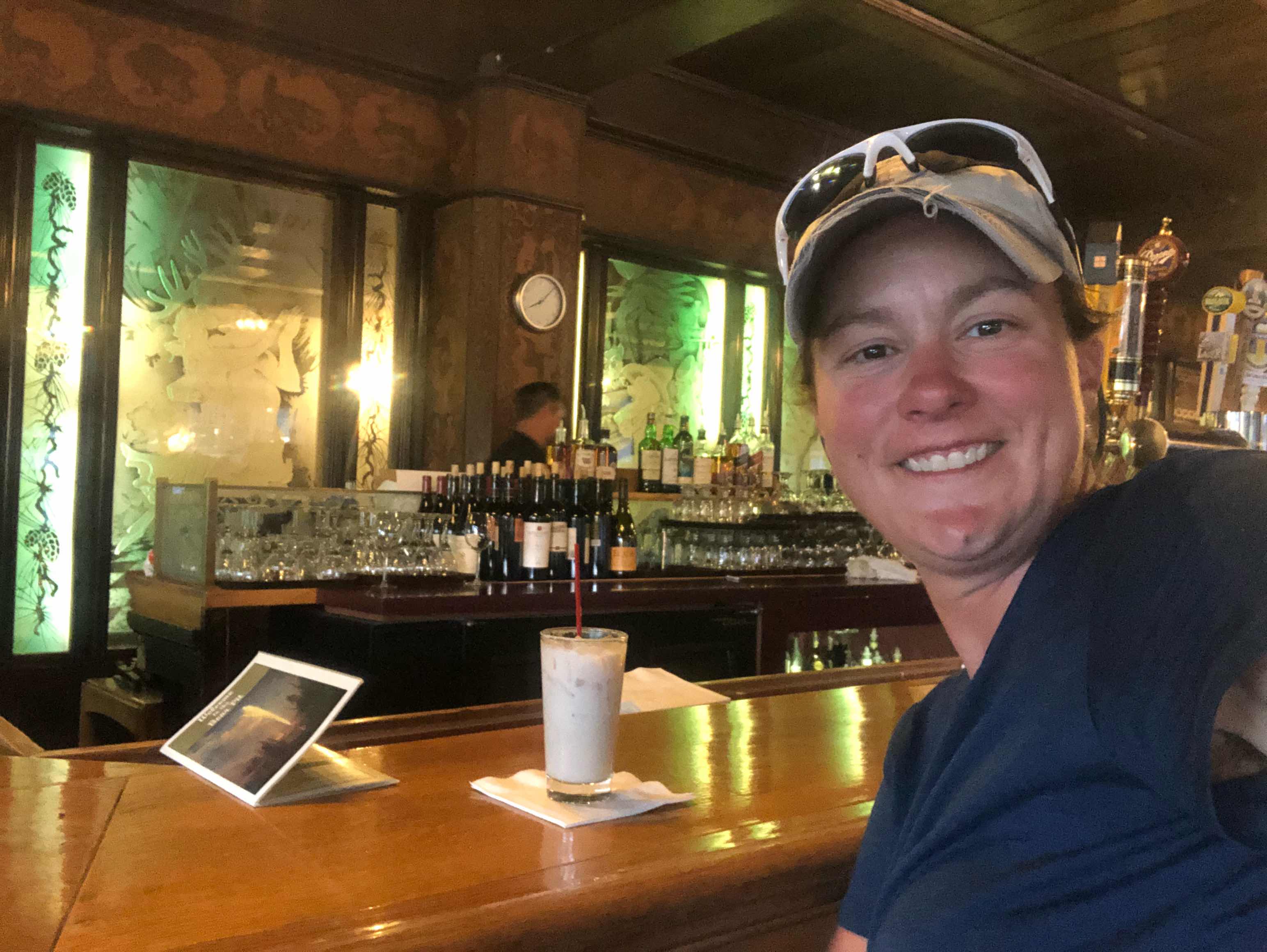 Bears Pit for dinner
Finding the RV area was a little more difficult than I thought. It was getting close to dark and the employee housing area was huge. I wandered around for awhile, but eventually I persevered. Andrea and her husband Eric had a few friends over for a fire. They gave me a very warm welcome. It was very kind of them to allow a perfect stranger to crash their evening. I really enjoyed their company. They used to live in Pinellas county in Florida. They eventually got so tired of Florida that they sold all of their belongings, bought a camper, and with their two children moved to Yellowstone. I just think that is the coolest thing ever. What a great way to raise their kids. It was dark when I arrived so unfortunately I didn’t get their picture. I hope they continue being happy in Yellowstone! 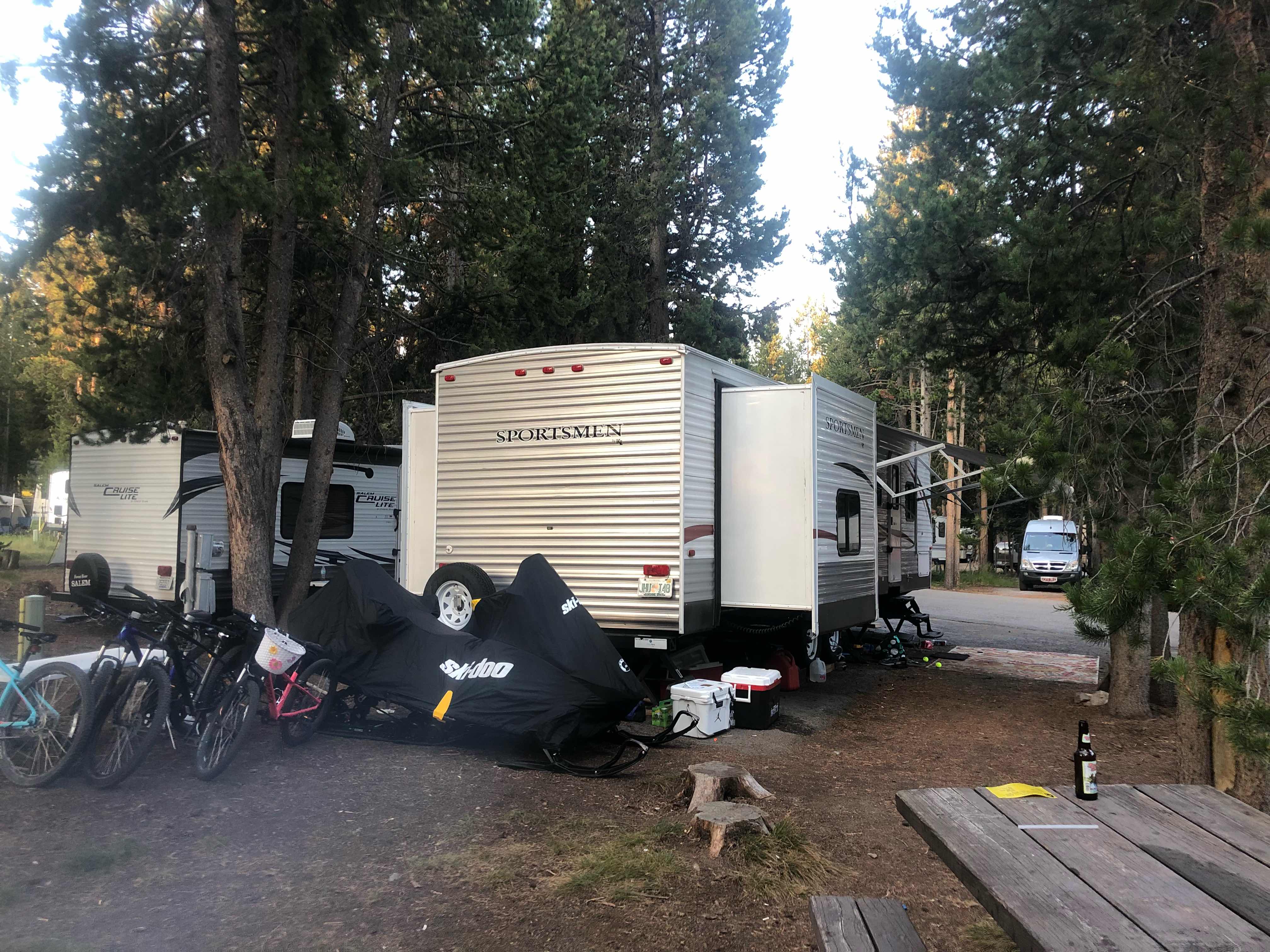 My campsite for the night
“Did I offer peace today? Did I bring a smile to someone's face? Did I say words of healing? Did I let go of my anger and resentment? Did I forgive? Did I love? These are the real questions. I must trust that the little bit of love that I sow now will bear many fruits, here in this world and the life to come.”
- Henri Nouwen