I was moving pretty slow when I woke up this morning. It took awhile to convince myself to get up and get moving. I was very happy to be done with the alternate. It was not very pleasant and I wish I had hiked the official trail through that section. I have fine tuned my morning routine. I pack up everything including my tent, then I retrieve my pack, which I put at least 100 feet from my tent, and finally I get my bear bag. Mace Windu accompanies me while I do this. I make my breakfast shake and drink it while I put everything in my pack. I’m only about 5-10 minutes slower leaving camp. My Subway sandwich that I had for dinner last night left me really thirsty. I drank all of my water. This is one of the few times that I was completely out of water leaving camp. I could have treated some lake water, but I prefer sources that are flowing. There was a nice spring about a mile from camp. After that I had a twenty mile dry stretch. I was pretty well hydrated, so I figured I could get by with carrying two liters until the next source. Just before the stream I spotted a moose on the trail. It was the first female moose I have seen. She was standing on the trail about fifty yards above the spring. I shouted at her to get her attention, but she couldn’t have cared less that I was there. Since she wasn’t moving anytime soon I decided to get my water. Once I was done filling up my bottles and adding my bleach I tried again to get her to move. I yelled a bunch, but nothing happened. Finally when I took s few more steps her way she ran off. I guess she had a certain distance in her mind for what was too close. I know that moose can be more aggressive than bears, but that is usually during their rutting season. I’m pretty careful about how close I will get to any animal. 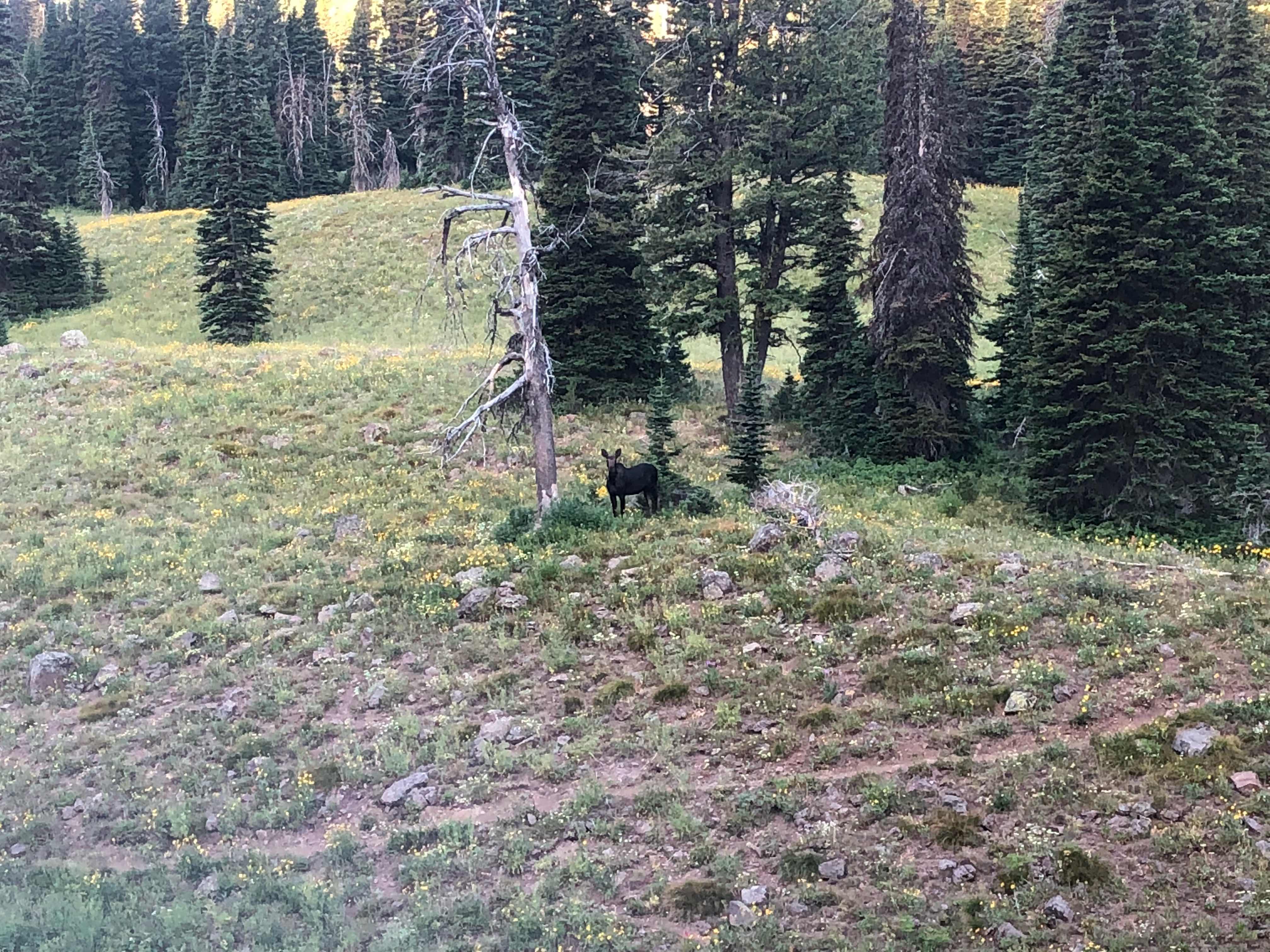 Zero cares given
The moose encounter was the most exciting part of the day. It was all uphill from there. The trail was overgrown in a lot of areas or nonexistent. I got pretty good at picking a bearing and following it. I had to be careful with my water consumption. It has been a lot of miles since I had to worry about my next water source. I actually seem to stay more hydrated when I’m in a dry stretch. When there is water all around I never feel like stopping to collect more. When it is dry I ration my water per mile so I tend to drink the proper amount. I’m not sure if that makes since or not. The uphill sections of my day were all very gradual climbs. I made my way up to the divide and then walked along a long ridge line. Eventually I had to drop back down into a valley. The descent was very gradual, with a lot of switchbacks down old, overgrown logging roads. 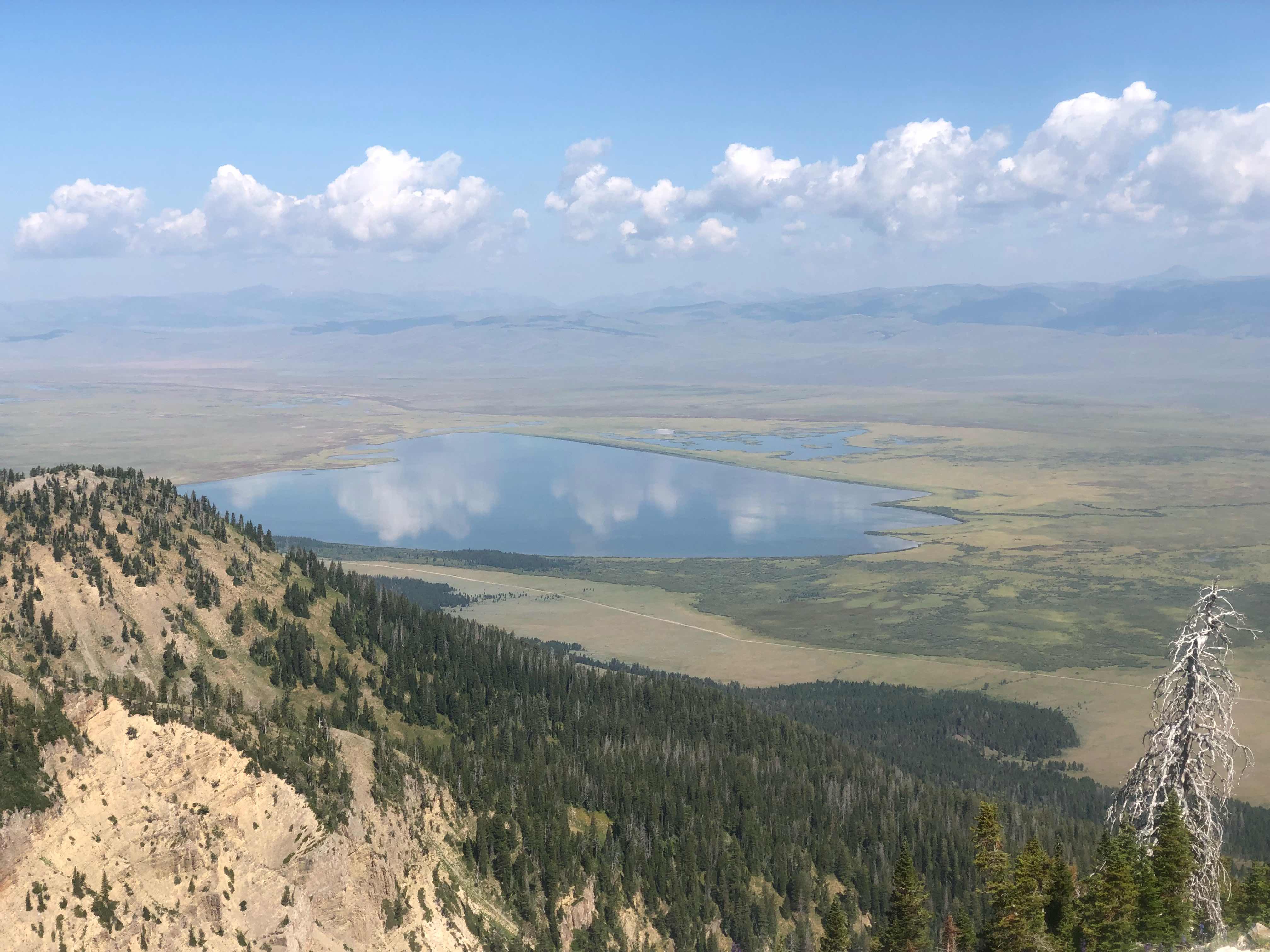 Cool view from the top of the ridge. I love how the clouds reflected in the lake 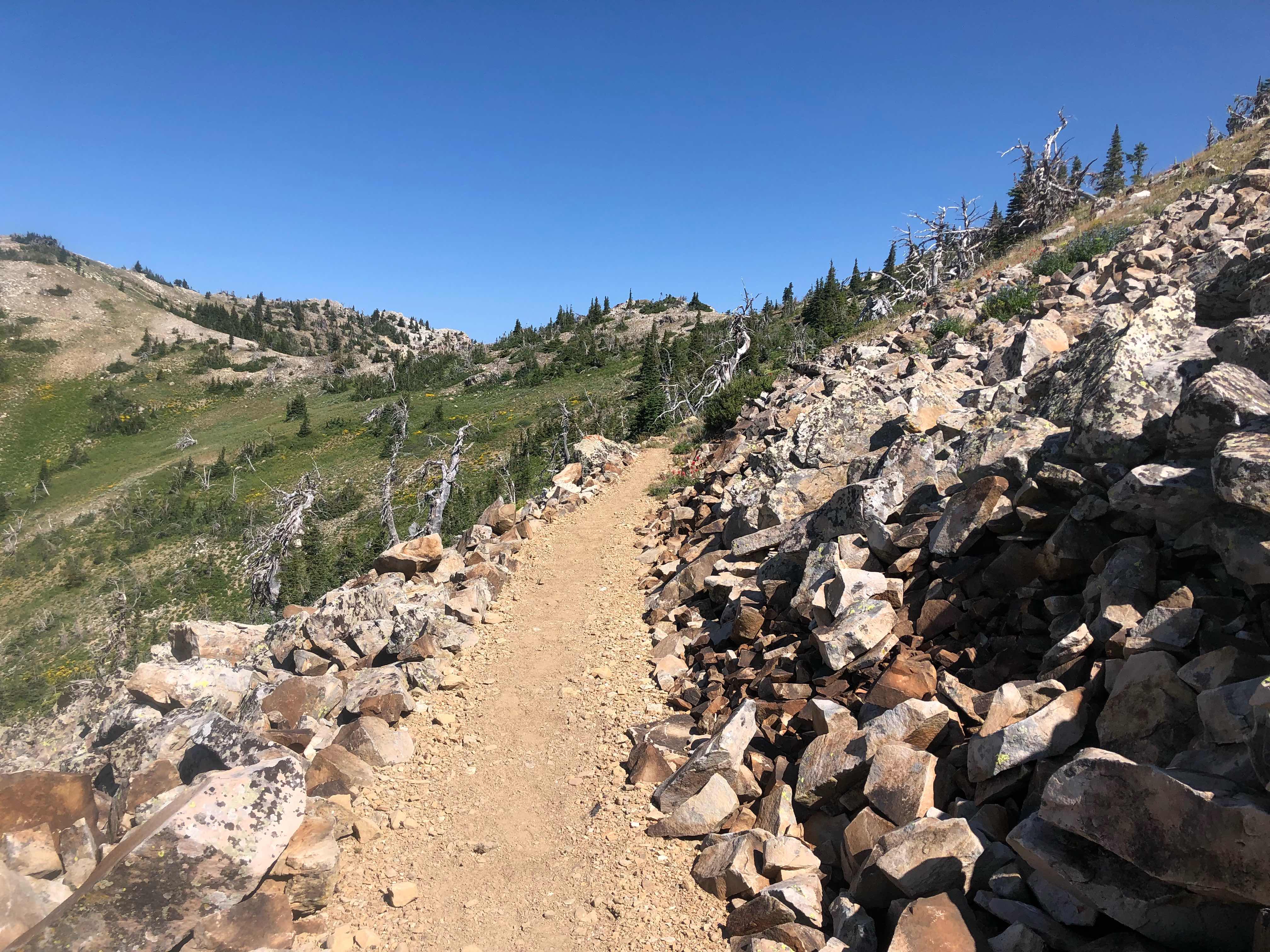 Awesome trail construction. I wonder how many hours it took to clear all of the rocks 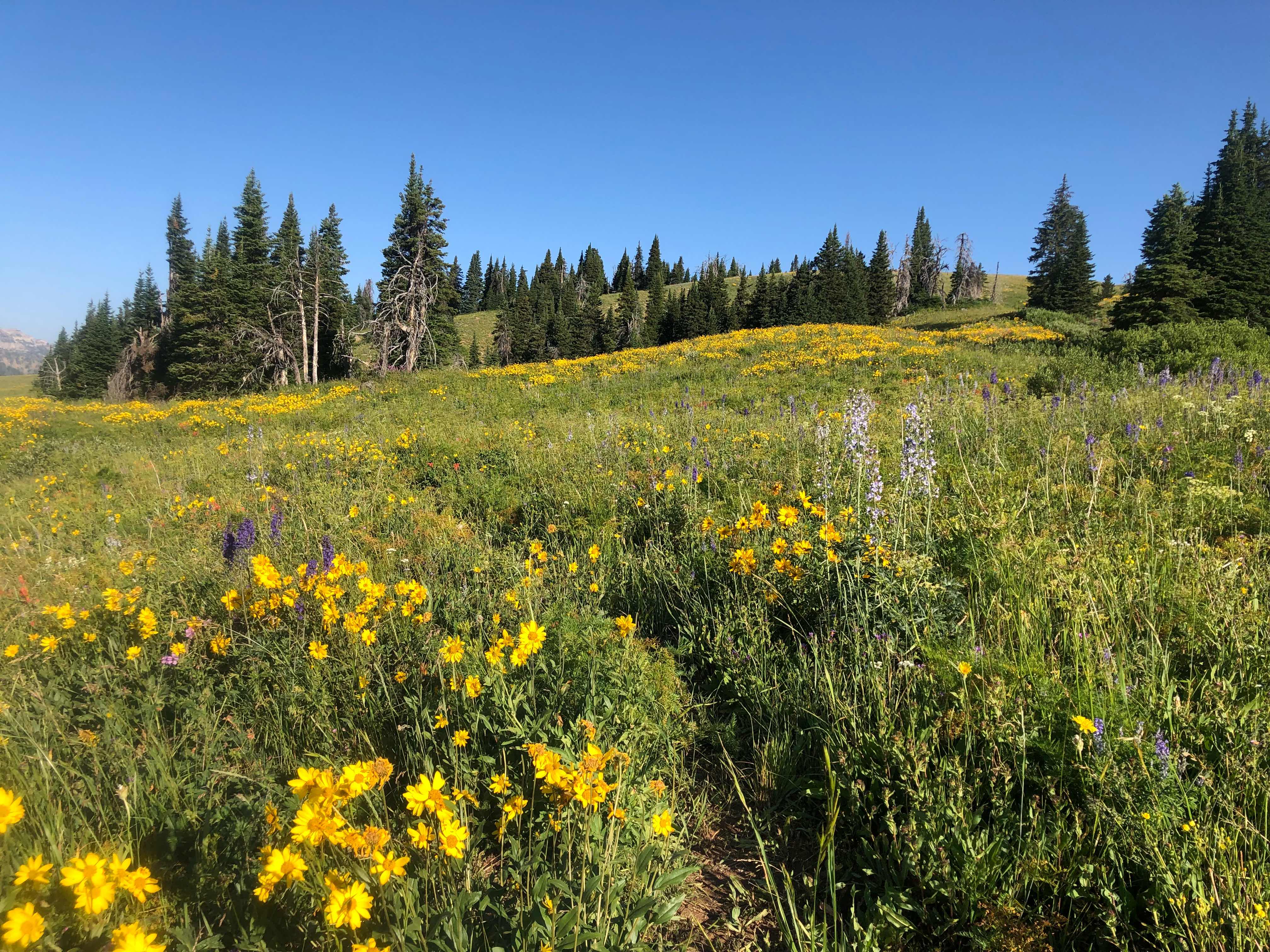 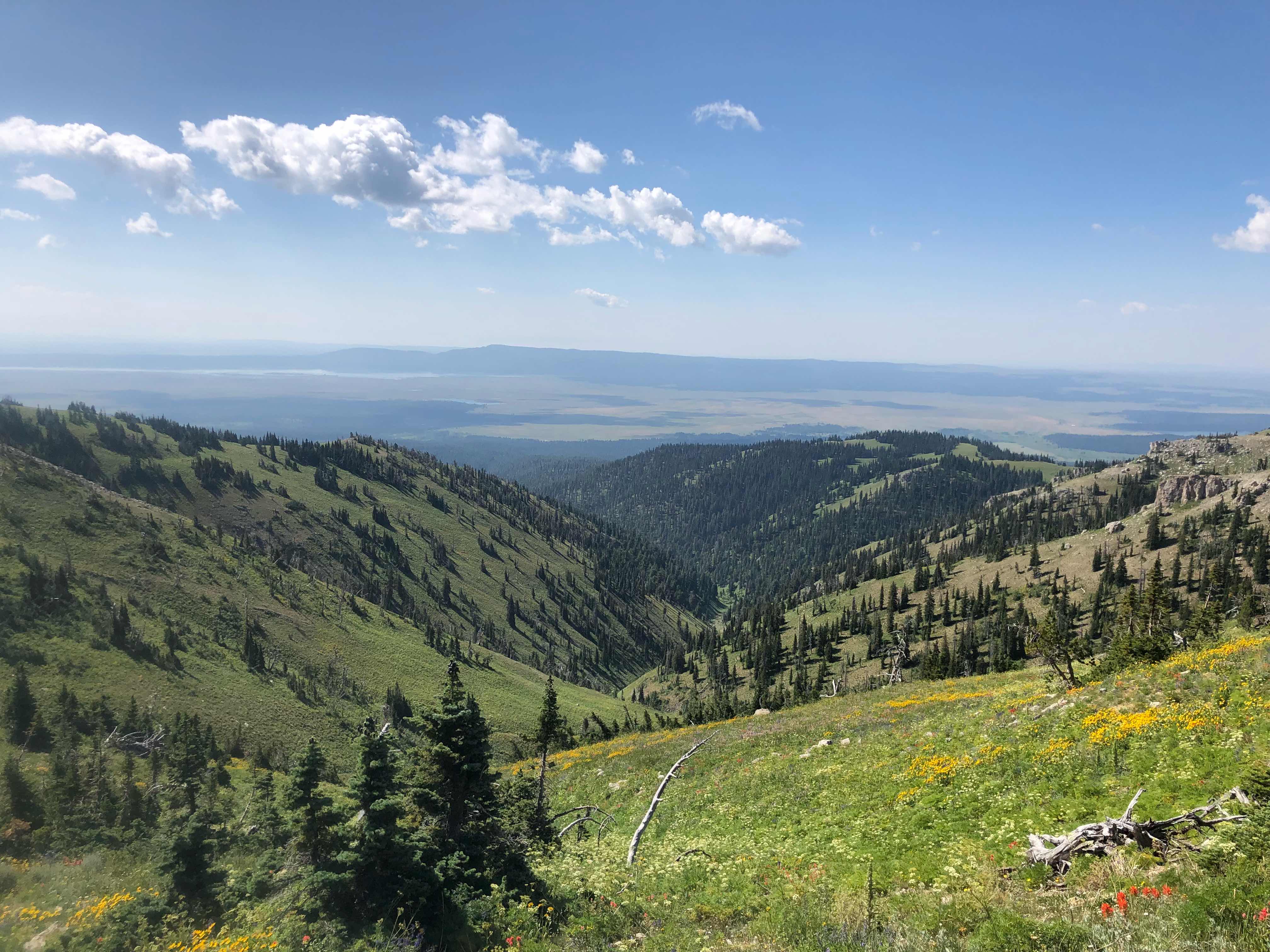 So much green
The area I’m currently hiking through is part of some kind of sheep experiment. A sign that I passed stated that the “US Sheep Station seeks to improve the genetic merit, nutrition, health, and reproductive efficiency of the sheep”. They graze on almost 17,000 acres in the area. I didn’t see a single sheep today. It was disappointing. The sheep are guarded by very aggressive dogs, so maybe it was a good thing I didn’t see any. 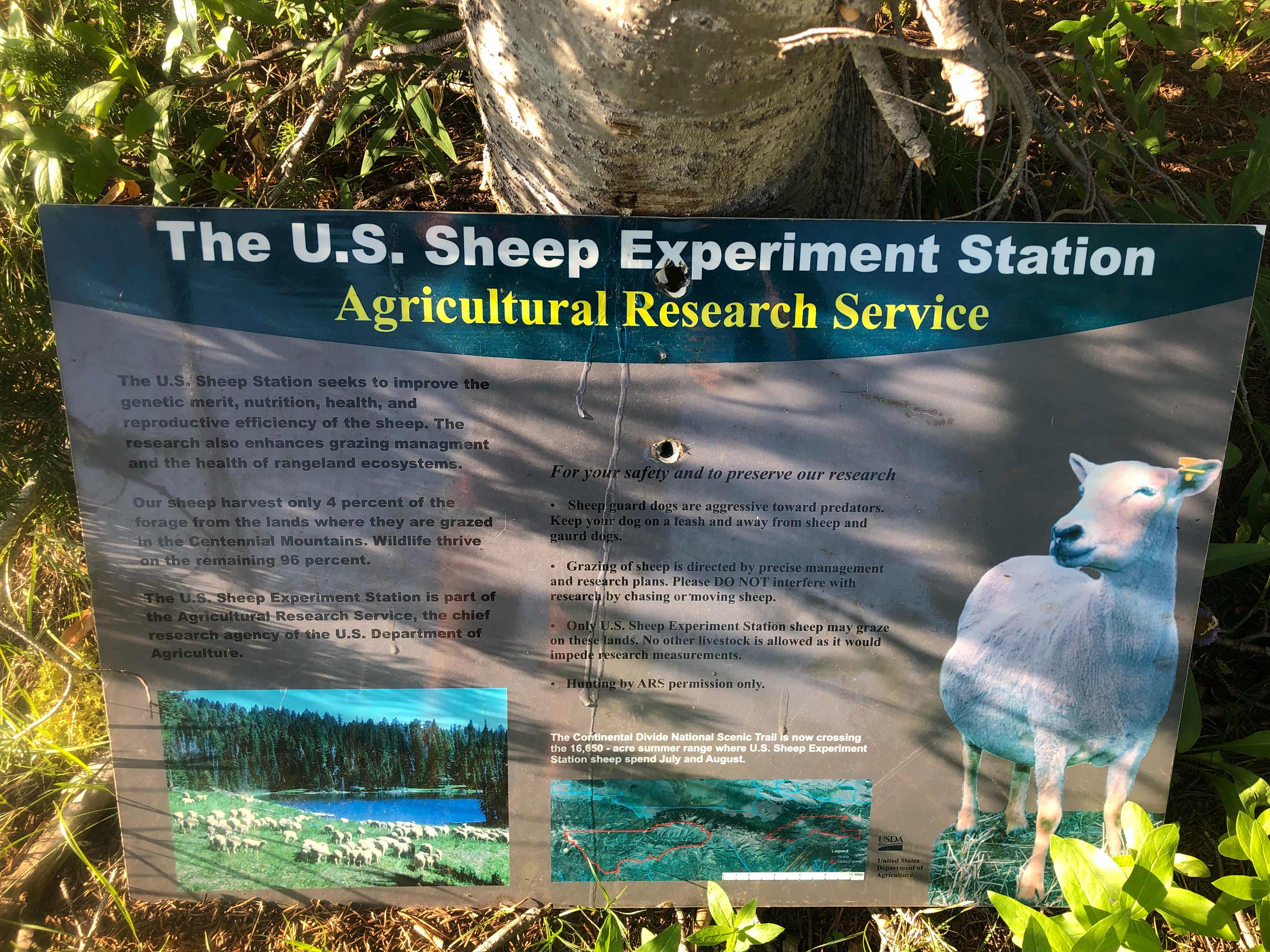 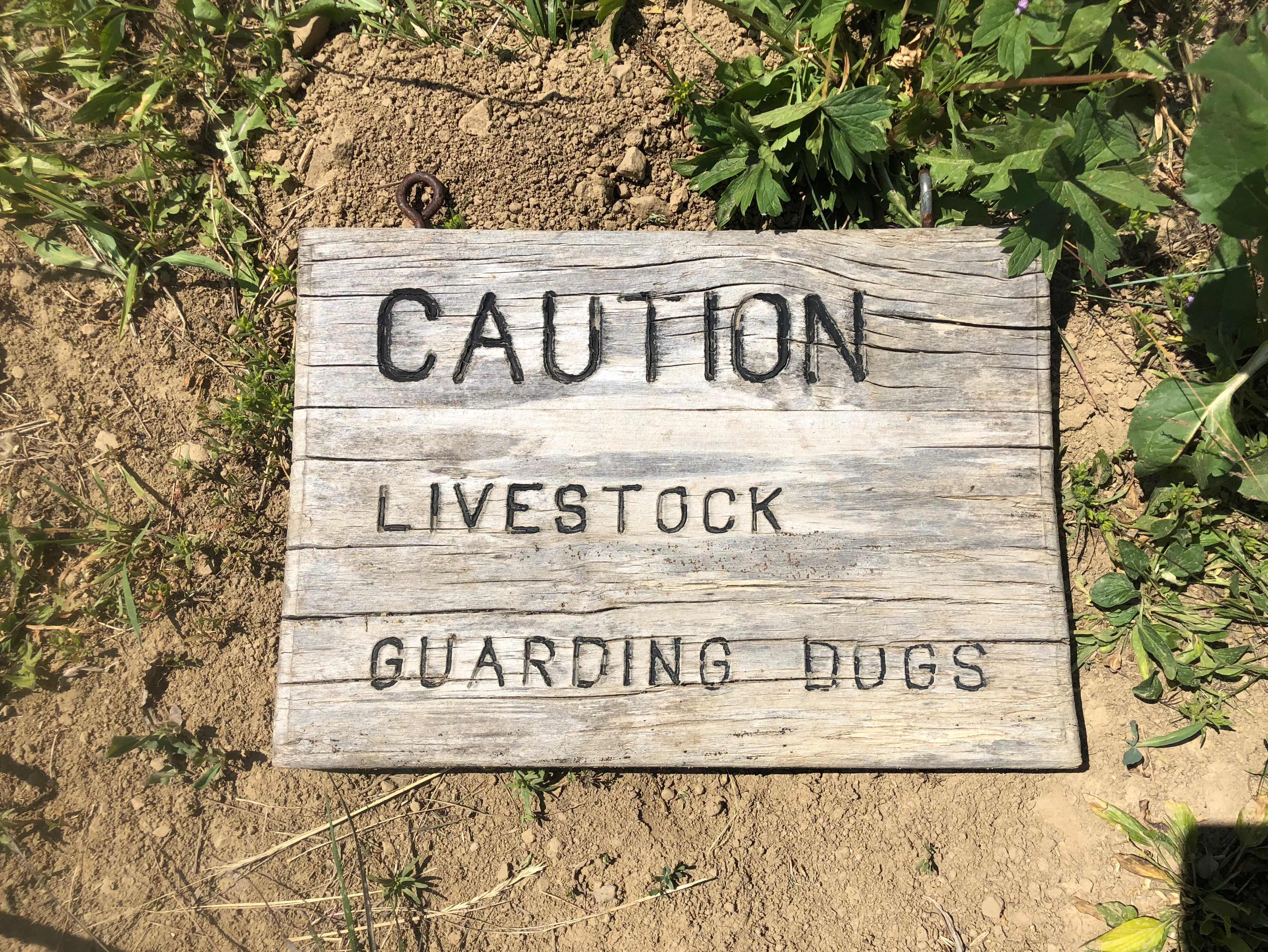 Apparently these dogs are mean

The only other thing of note that happened today was the wildfires I could see in the distance. It looked like there were five different fires. I could see large columns of smoke rising in the distance. I couldn’t tell if they were in Idaho or Montana because I’m never sure what state I’m in. Just one time all day I hit a USGS marker for the borders. I was in Montana for all of 65 feet before heading back into Idaho. I’m sure that I was in Montana a few other times as well. 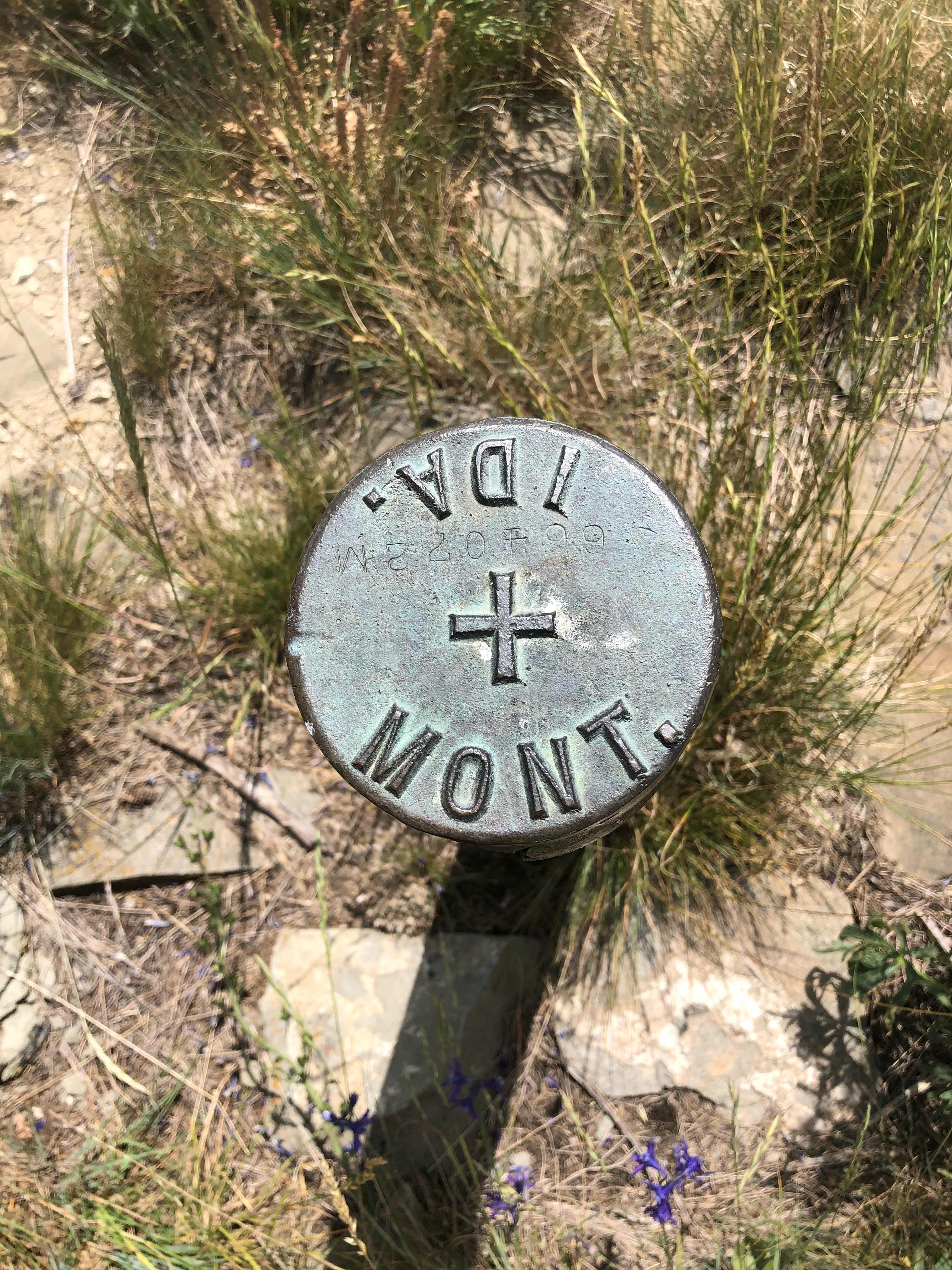 USGS survey marker
I enjoyed the hiking today. It was nice to be back in the open and above treeline. The views I had were a little hazy from the fires, but it sure beats the views I had yesterday. 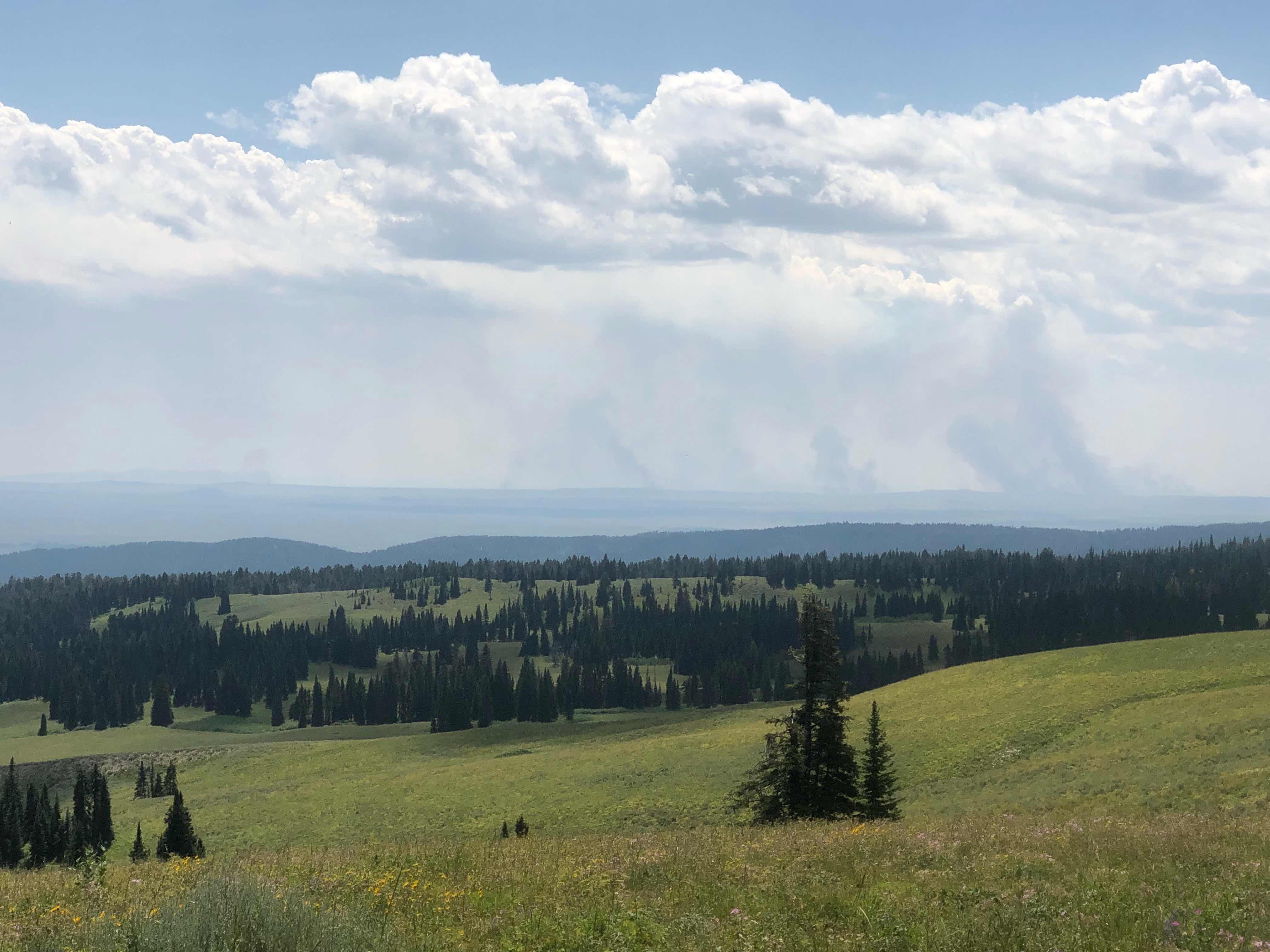 Not sure if you can make out the columns of smoke 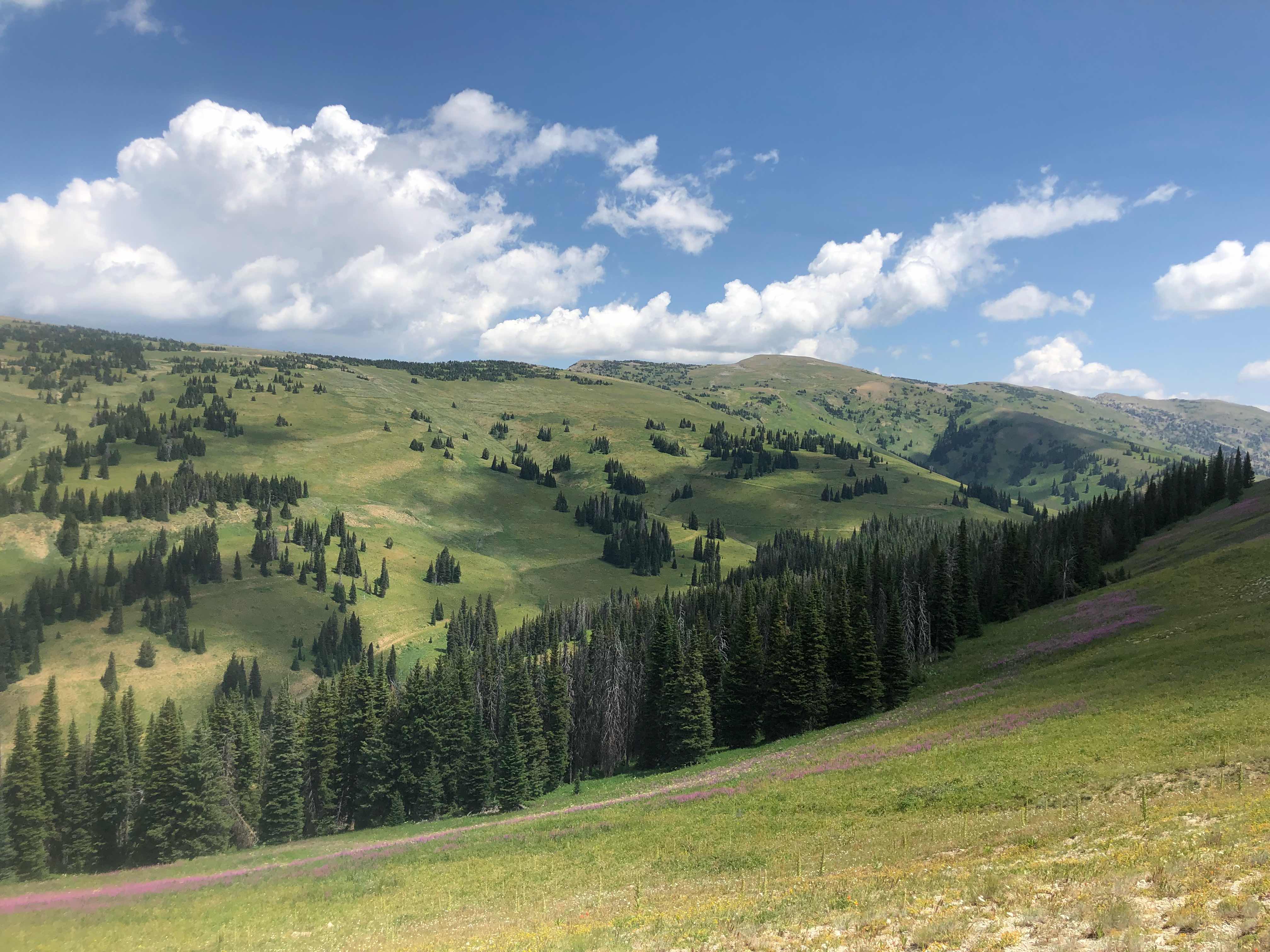 Notice the carpet of purple wildflowers
I couldn’t decide on where to camp tonight. I started the day 55 miles from town so that complicated things. It can be a difficult hitch into the town of Lima. There is s hotel that has a shuttle at 9:30, 12:00, and 5:30. Even if I pushed hard today and tomorrow I couldn’t make it there until the last shuttle tomorrow night. I really dislike paying for a hotel when all I’ll really have time to do is sleep there. It made since to hike a few less miles today and tomorrow and nero in on Tuesday. I figured I would hike 28 miles today and 23 miles tomorrow. Well, I hit 23 miles today at five o’clock and there was a stream, privy, picnic tables, and a bear box. As soon as I saw the bear box my mind was made up. The picnic table and privy was just icing on the cake. Not having to hang my food might just be my new favorite on trail delight. Previously that honor went to finding a trash can on trail. 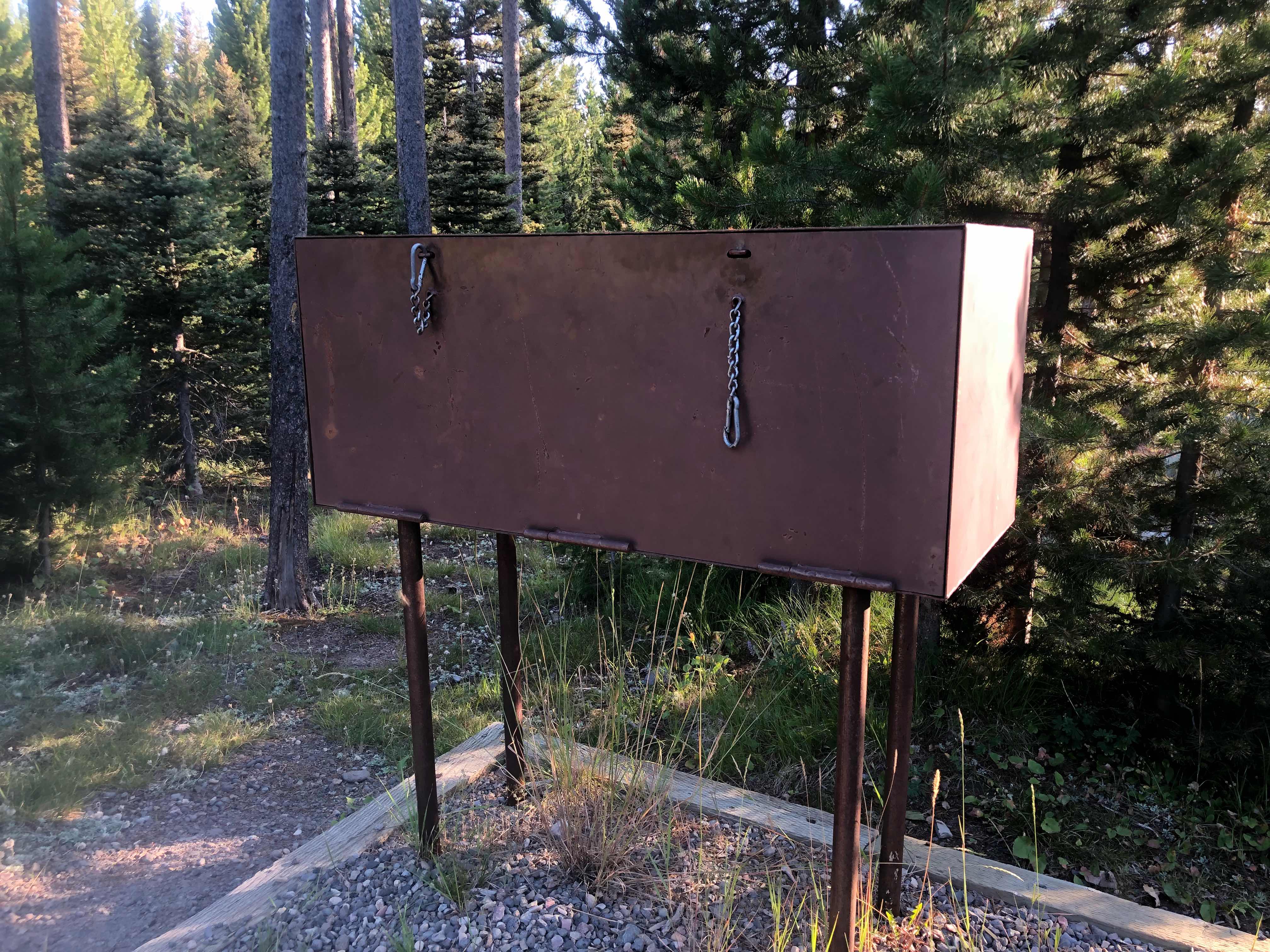 Bear box
I originally planned on just cooking dinner and hiking a few more miles, but that just did not make since. I felt like such a slacker for only hiking 23.8 miles today. I could have gotten in at least another 7 miles. I’m sure that when I have a full day in town instead of just an evening it will seem like the best decision ever.

“A person who doubts himself is like a man who would enlist in the ranks of his enemies and bear arms against himself. He makes his failure certain by himself being the first person to be convinced of it.”
- Alexandre Dumas