I woke up this morning with a single purpose, hike to the Battle Pass trailhead as quickly as possibly. Today was the day I would not only see my parents, but I would finally connect my footsteps from my flip flop. It felt like I had hiked the Great Divide Basin ages ago. It felt great to finally catch up to where I had left off in Wyoming. The four miles I had to hike went by quickly. For the most part I hiked through a swamp. Within minutes of leaving camp my shoes and pant legs were absolutely soaked. I could have cared less. I knew that I would be in town shortly after seeing my parents. I also knew that we would be staying in a nice hotel where I could get cleaned up. 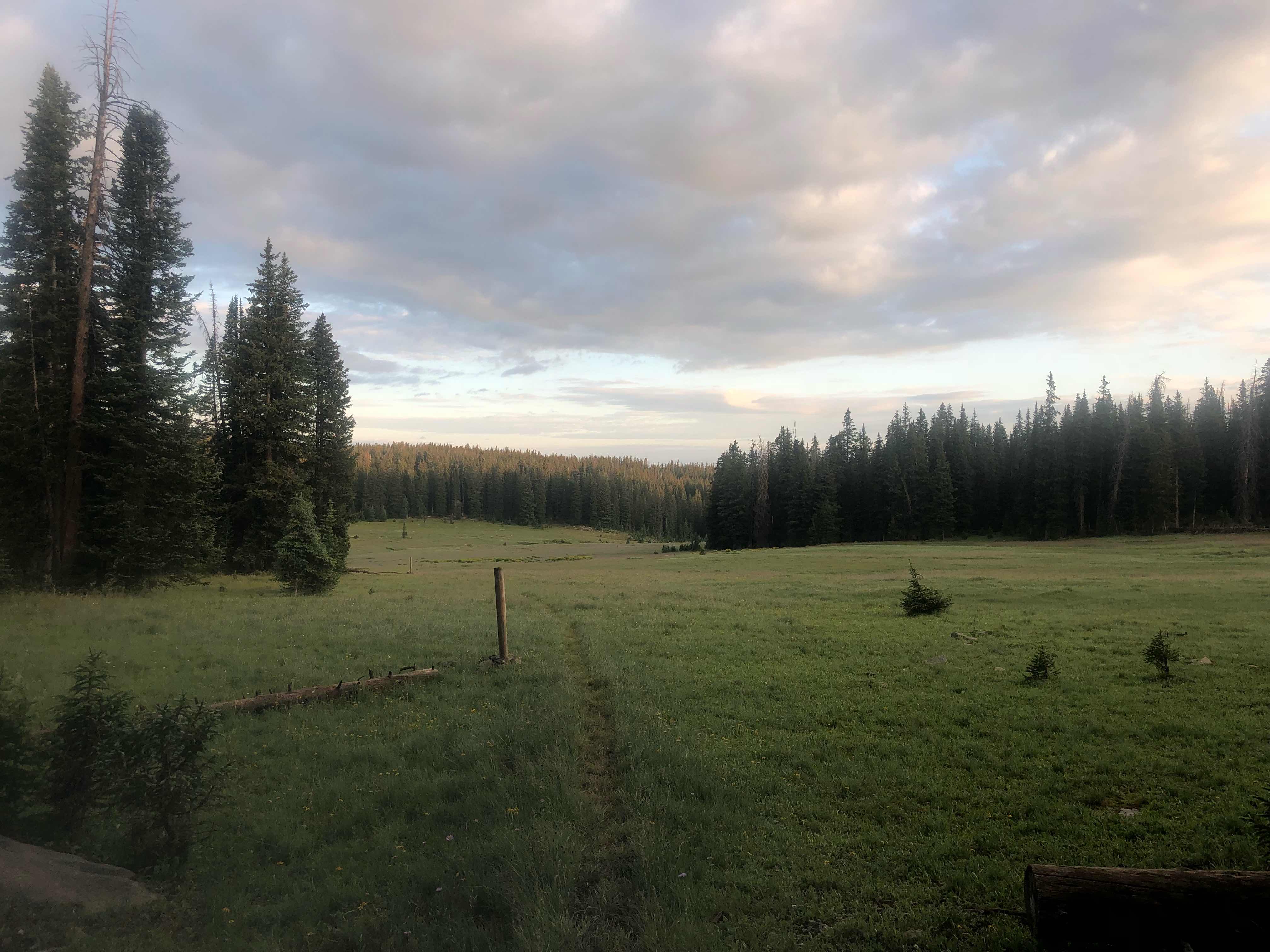 Swampy meadow
Shortly before getting to Battle Pass I caught up with Perc and CS. I haven’t seen them since Pie Town. I stopped briefly to say hello, then I took off at top speed. Seconds before getting to the trailhead I passed a large box and cooler filled with trail magic from the residents of Encampment, WY. I knew that The General would have a cold drink and food for me, so I left the trail magic for hikers behind me. 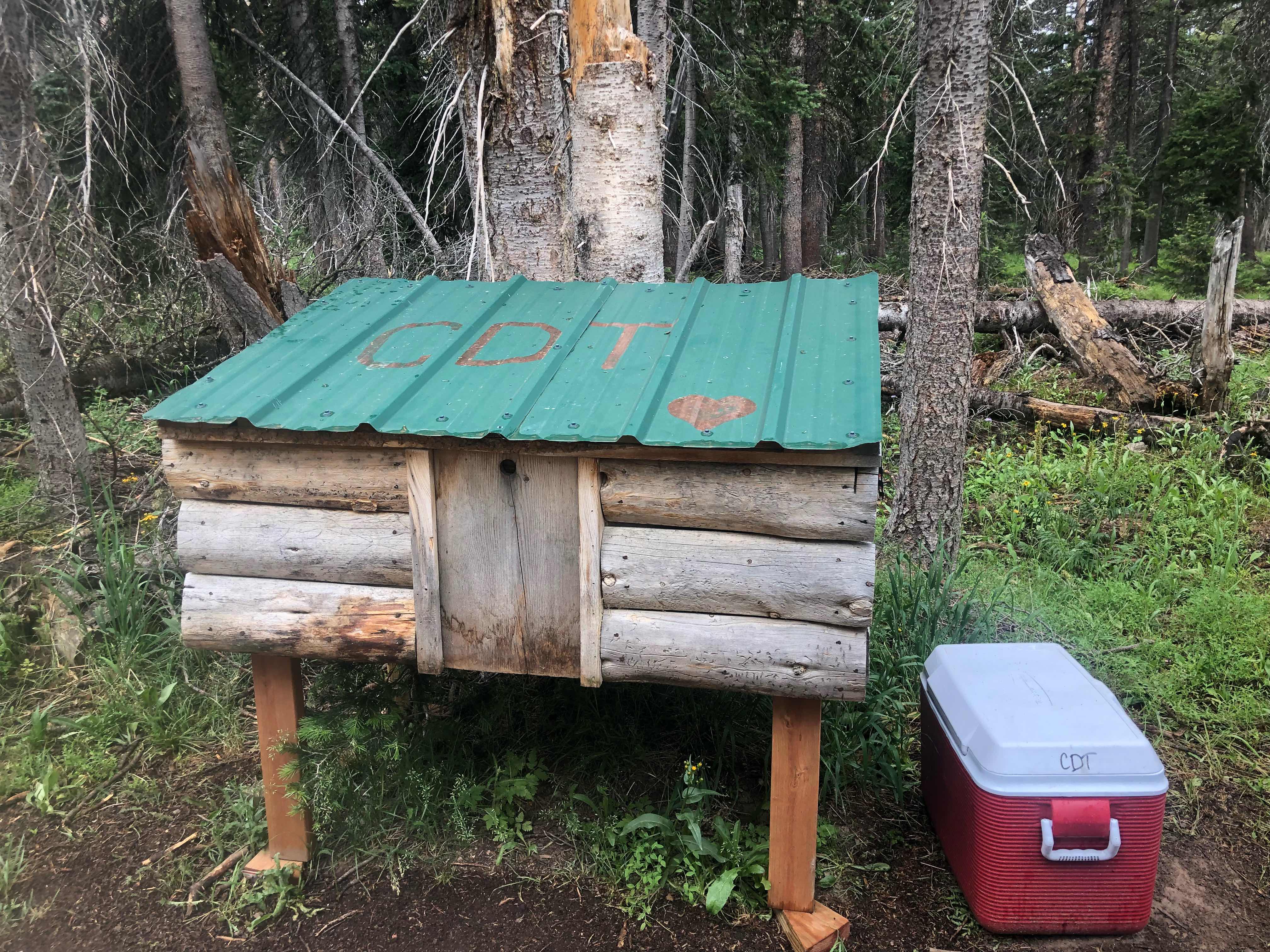 Thanks citizens of Encampment
The trail came out to a parking area, but it wasn’t the same area I had started the flip flop at. I was momentarily confused. I was 100% sure that this was were I was supposed to be. I checked my maos and discovered that the trailhead I needed to be at was actually .2 miles farther down the highway. I hiked down the road so that I could connect my footsteps, then I walked back to the first trailhead. By the time I had hiked back my parents were there waiting for me. The timing could not have worked out any better. I found Perc and CS trying to yogi a ride to town with my mom and dad. Unfortunately, we didn’t have room to take them with us. We did have some Mt. Dew and snacks for them. 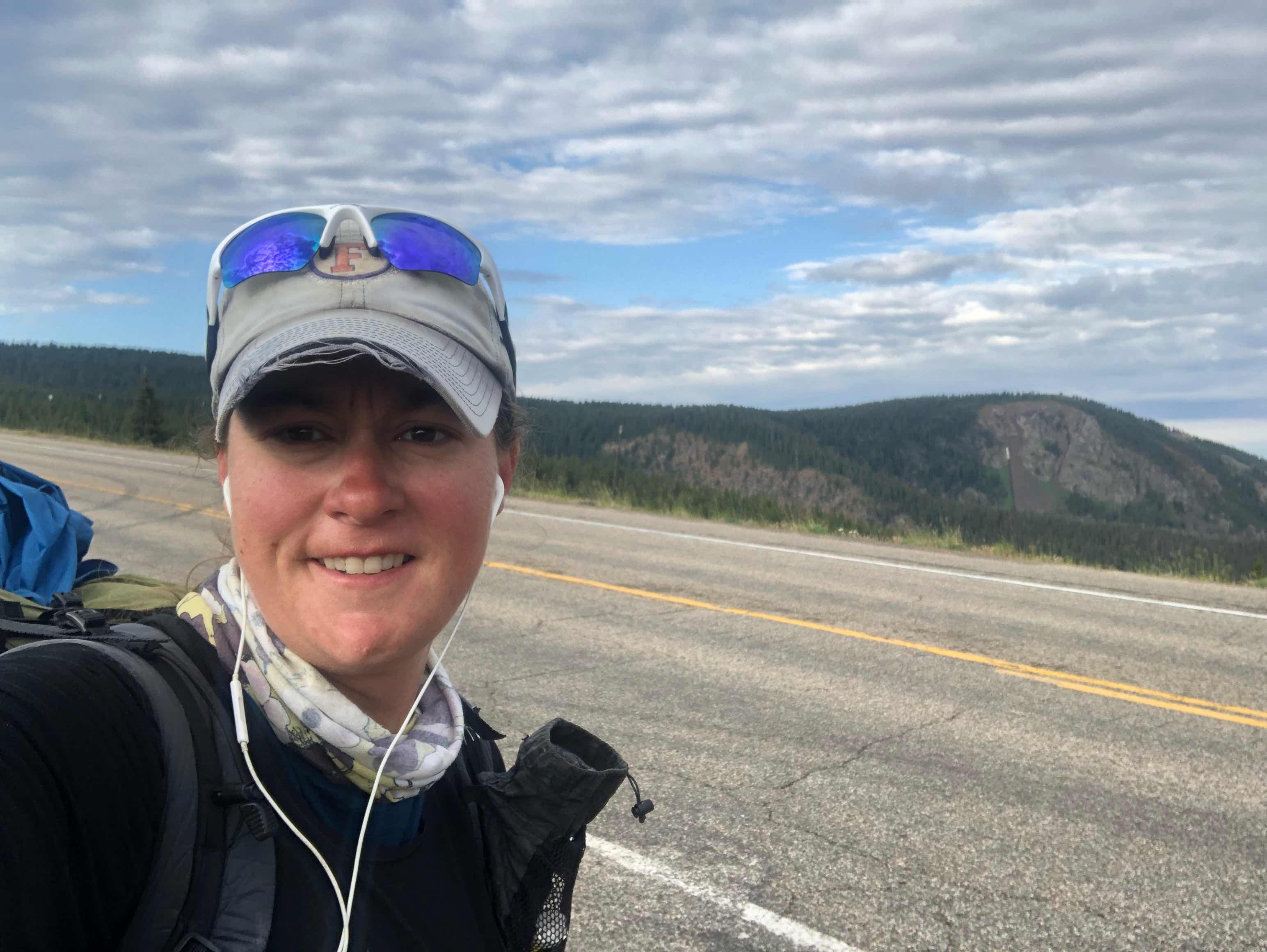 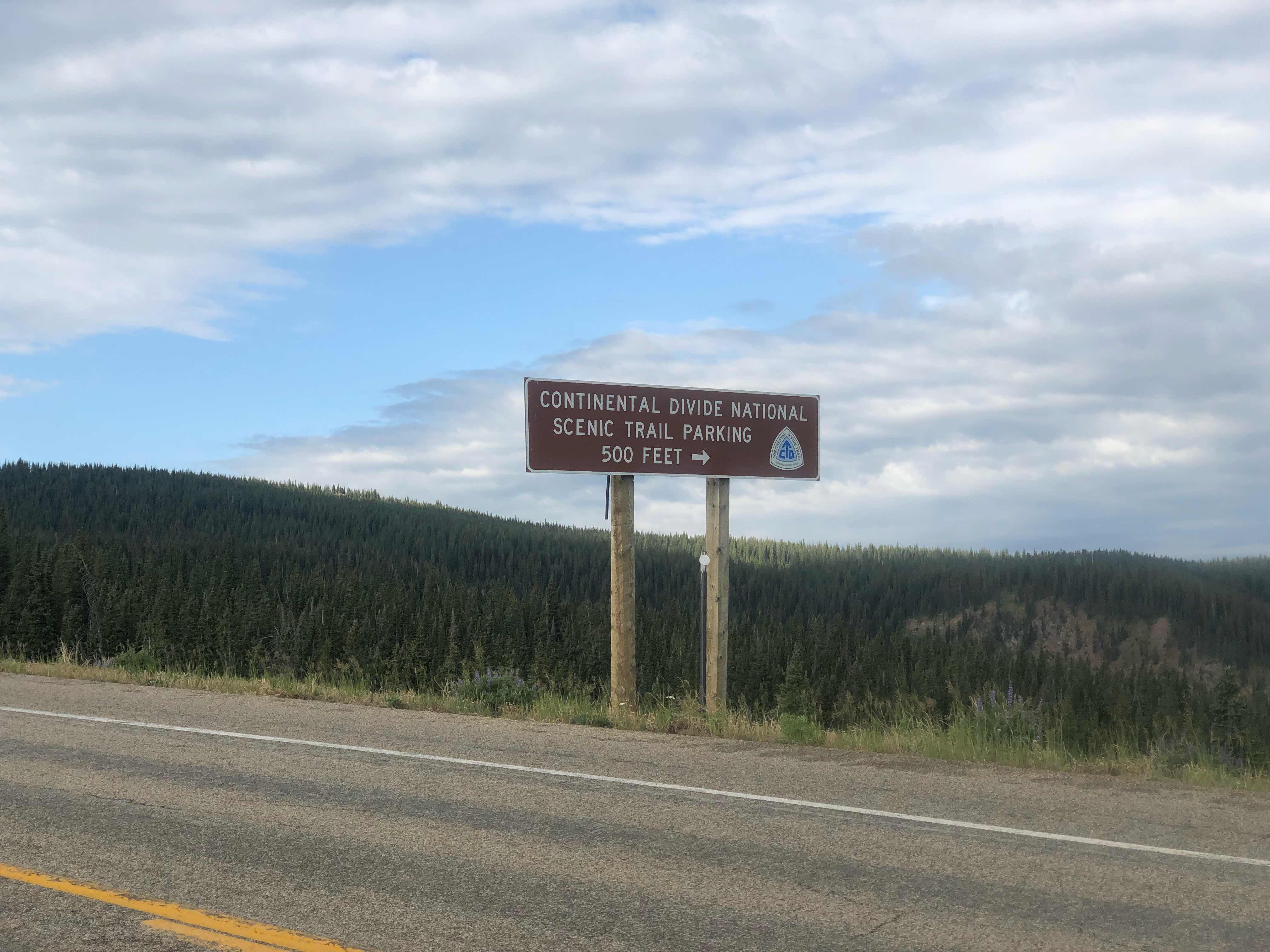 Battle Pass Trailhead
The plan was to drive to Rawlins, WY to spend the night and to organize food boxes for the upcoming resupply drops. Hannibal had the car loaded with all the food I had bought before I started the trail. It was an impressive collection of junk food. Even more impressive was the fact that he got it all into the car. The drive to Rawlins went by quickly. It was very surreal to come back to a town I had already hiked to and stayed in. We were extremely lucky that the Hampton Inn let us check in so early, it was only 9:30. We even got to eat a free breakfast there. Since I had eaten all of my food last night I was really hungry. I had a Belgian waffle topped with a kit kat candy bar, syrup, and whip cream. Then I made a bowl of eggs, maple sausage, potatoes, and salsa. It was a good morning. 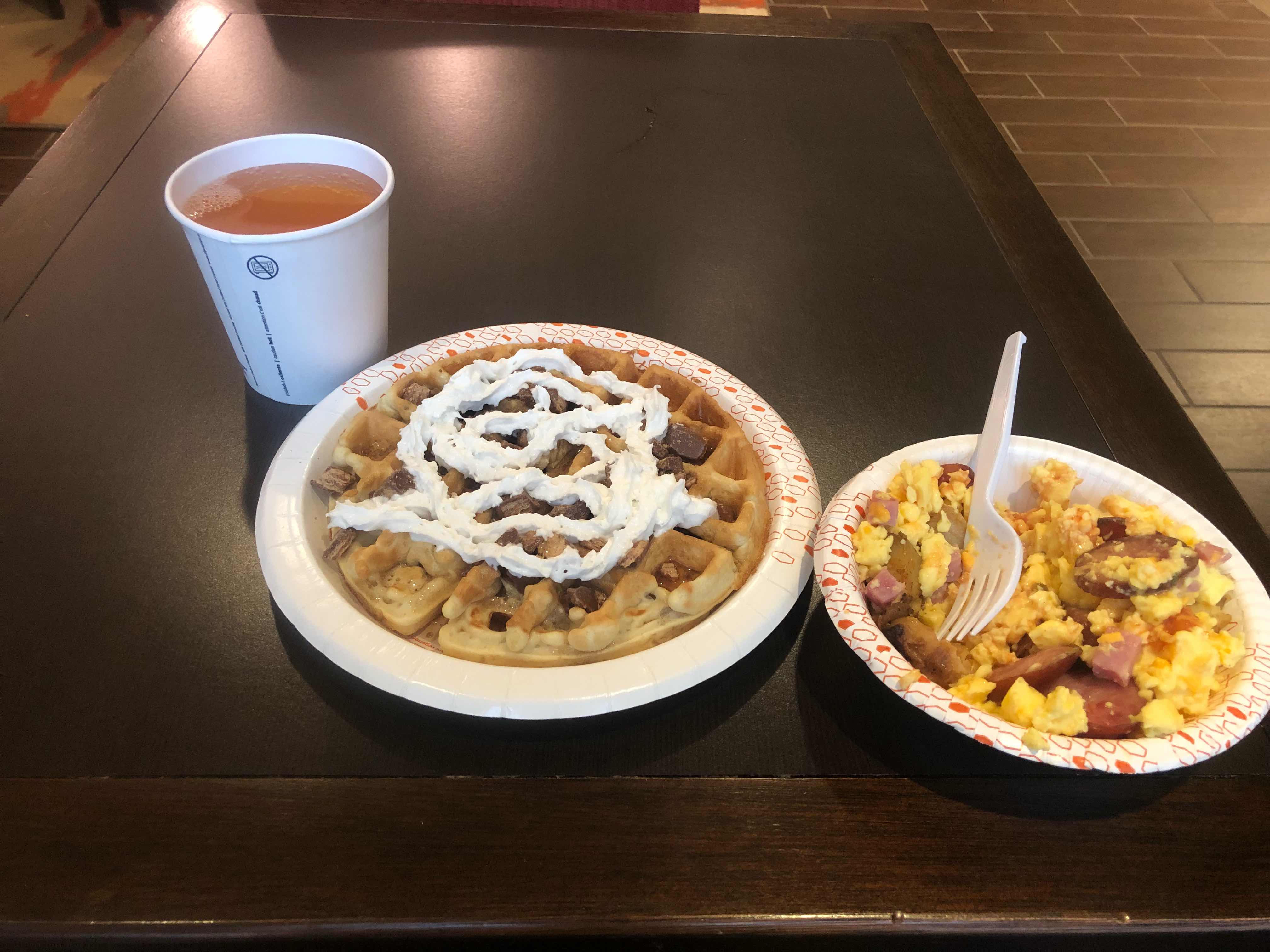 Free breakfast
The Hampton Inn was a luxurious hotel compared to what I am used to. I immediately started tackling a few important chores. The first thing I needed to do was shower and laundry. Having The General there to help was awesome. While I was taking a shower she started my laundry for me. She had even brought me my own clothes from home to wear while my hiking clothes were being washed. It was shocking how big my clothes were. After my shower I went downstairs to the fitness center. I haven’t had a chance to weigh myself and there was a scale in there. I was shocked to discover that I have lost almost thirty pounds. This might be the skinniest I have been in ten years.
It was time to tackle a very important project. I carry a 10 degree sleeping bag made by ZPacks. After hiking the PCT I didn’t wash it. Dirt and body oil from over 3,500 miles have taken there toll on my poor bag. Most of the loft has gone from it. My 10 degree bag is more like a 40 or 50 degree bag, as a result I am carrying a heavy duty sleeping pad and more layers of clothing to stay warm. I decided to take a chance and wash it. I bought a special down wash to try to rejuvenate it. The process seemed pretty straightforward, wash the sleeping bag with the special detergent in a bathtub and set the bag outside to dry. I knew I would need a sunny day and lots of time for the bag to dry. The washing part was easy. The surprising part was how heavy my sleeping bag was after washing and rinsing it. Down feathers really absorb an obscene amount of water. 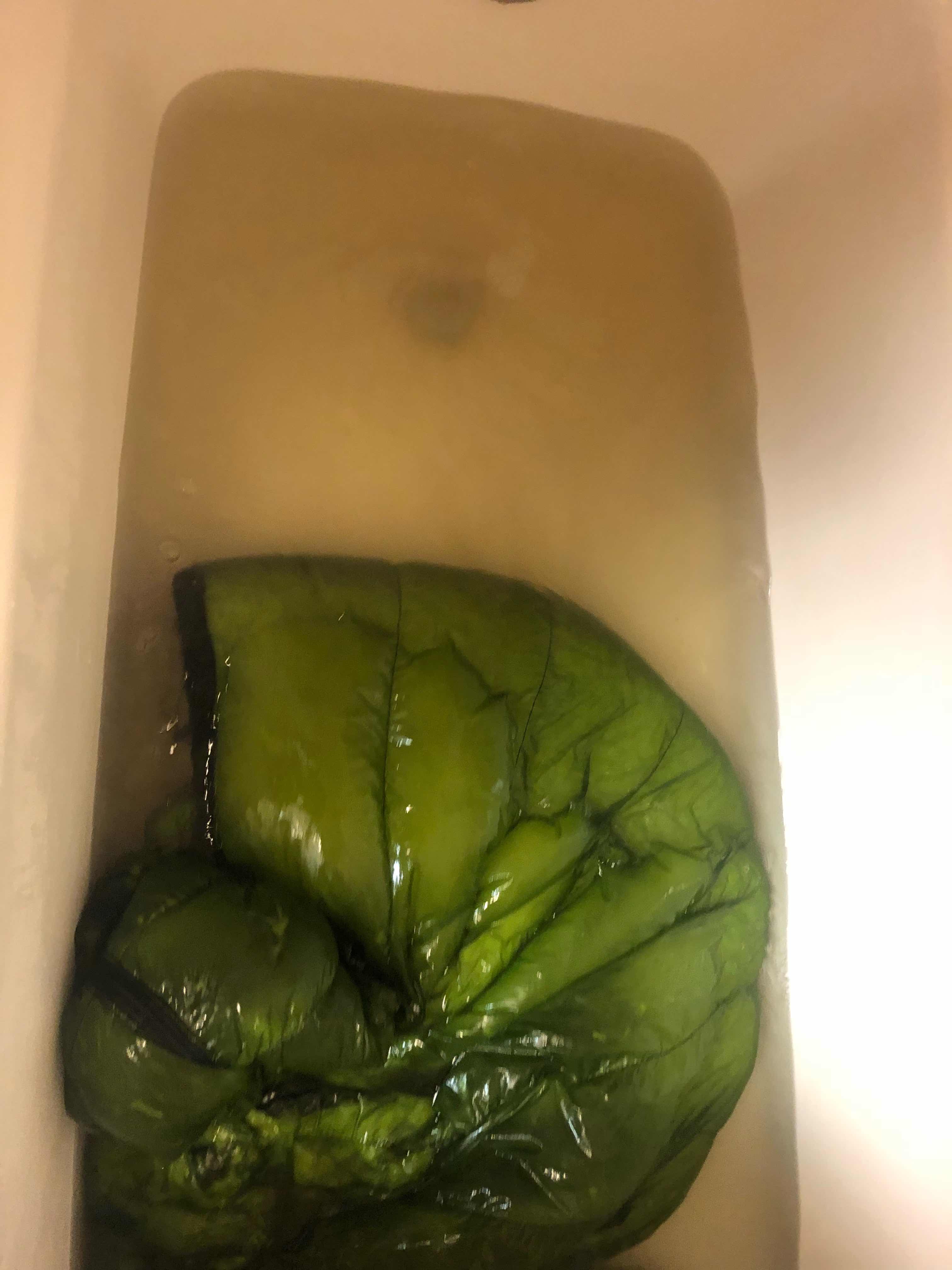 Pretty gross that I have been sleeping in that. I can’t even describe the smell
After ringing out as much water as possible I took it outside to dry. Hannibal and I decided the best thing to do was to leave it on the hood of the car. We devised a system to maximize the heat of the day. We tied it at strategic places and turned it inside out so the black liner could absorb more sunshine. Every thirty minutes we would go check on it and try to fluff it up and break apart the clumped up down. I grew weary after checking on it the first time. It didn’t seem to be drying much and the down was very clumped up. I wasn’t sure I would be able to get it back to how it was before I washed it. The only good thing was the smell of dirty feet and rotting meat was gone. When I went to fluff one side I banged my knee on the tire of the car. My wound immediately started gushing blood again. Shit! I had been so careful with it for the past 5 days. I limped back up to the room to sort myself out. The doctor had given me more of the Dermabond to use, but I decided to put on some Neosporin and bandage it up. I thought letting it breathe might help it to heal faster. We kept checking on the sleeping bag every thirty to forty five minutes. In the mean time I began to go through all of my food and make a shopping list.
We went out for an early dinner. The first place we went to was a dump. We sat at the bar for about one minute before deciding to leave. I think we made the right choice. The place was pretty disgusting and there were several drinks sitting at the bar. It was very inviting. The second place we went to seemed a bit iffy as well, but it was very busy with what looked like a lot of locals. We decided to stay and eat. I had the frisbee burger and fries topped with green chili hash. The burger was served with melted queso cheese that was about the size of a small frisbee. It also had carmelized onions, bacon, and bbq sauce. It wasn’t the best burger, but it was big. 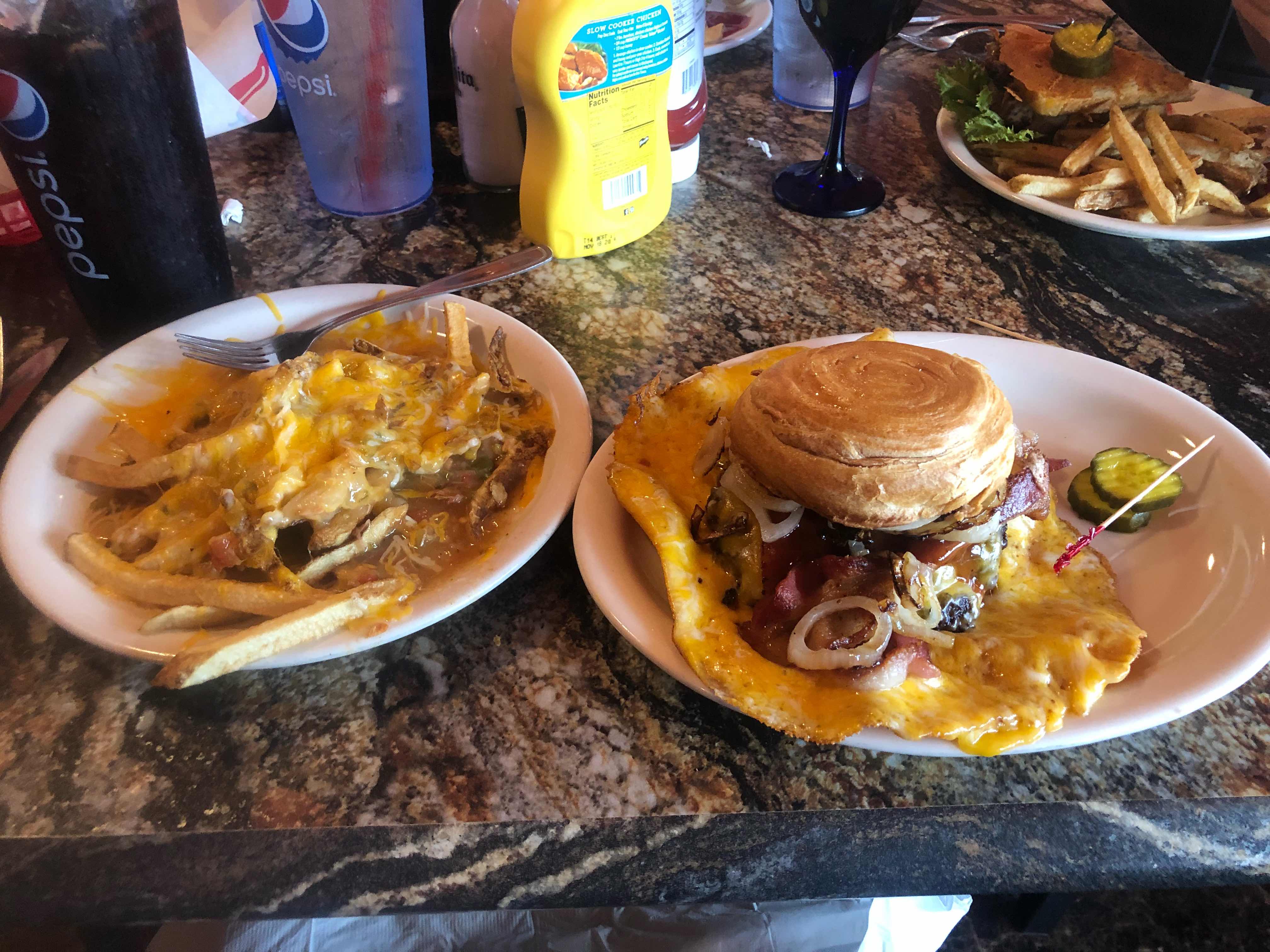 Greasy diner type food
After dinner we went to Walmart so I could pick up a few things. I’m trying to build resupply boxes for 4 upcoming stretches. Planning that far ahead really stresses me out. I found pretty much everything I needed and we went back to the hotel to get started. The first thing I had to do was put together food for the next seven days. I start off with a 171 mile food carry. That is a lot of food! I wasn’t sure that my Zpacks pack would handle that much food weight very well. I had my parents bring me my old pack, a ULA Circuit for this stretch. The Zpacks pack is only rated to carry 30lbs comfortably. My old ULA pack can carry 35-40 pounds. I got two boxes made before I couldn’t focus any more. I was worried that I would overlook something major. We had had such a busy day, that I think everyone was ready for bed. I had my stuff spreed all over the room. I took a few minutes to reorganize the room. Both of the beds had food and gear strewn all over them. We couldn’t lie down until I moved things a bit.
Today was a great day and I loved spending time with my mom and dad. I feel like we got a ton accomplished. Tomorrow should be another crazy busy day.
“Happiness is having a large, loving, caring, close-knit family in another city.”
- George Burns