I feel like I sound like a broken record, but once again I was really tired when I woke up this morning. I didn’t finish my camp chores until almost ten o’clock last night. By the time I finished writing my blog it was after eleven. Just once before I finish this hike I’d like to get to camp early, setup, cook, eat, and finish my blog before dark. I was trying to hike a big mile day today, so I packed up and got out of camp quickly. It wasn’t too cold when I first started hiking. As I followed the creek downhill it got colder and colder. I actually had to stop and put layers on instead of taking them off. It was a very cool hike. The creek I was hiking along was more like a raging river. It had really carved out the landscape. I had a few sketchy crossings of the stream. Upstream I was able to make my way across by hoping along rocks. Farther down stream I had to make my way across log jams. I much rather prefer rock hopping. Walking across wet logs is terrifying to me. One slip and you are at the mercy of the current. I slowly made my way across the logs. A few times I had to stop midway across and gather my courage. I unstrapped my hip belt in case of a fall. If you fall in you have moments to free yourself of your pack before you get dragged under. Luckily, I made it across without incident. 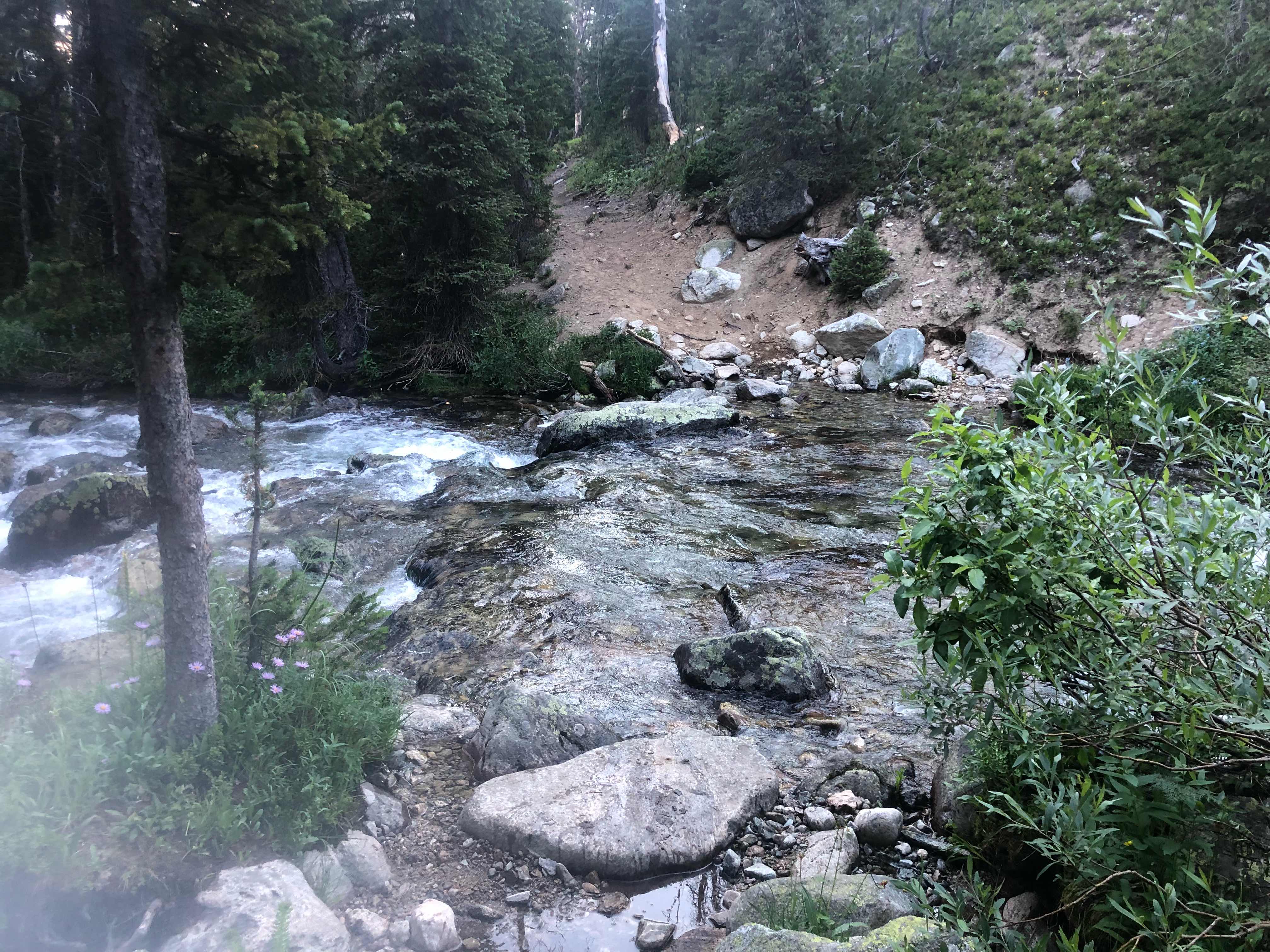 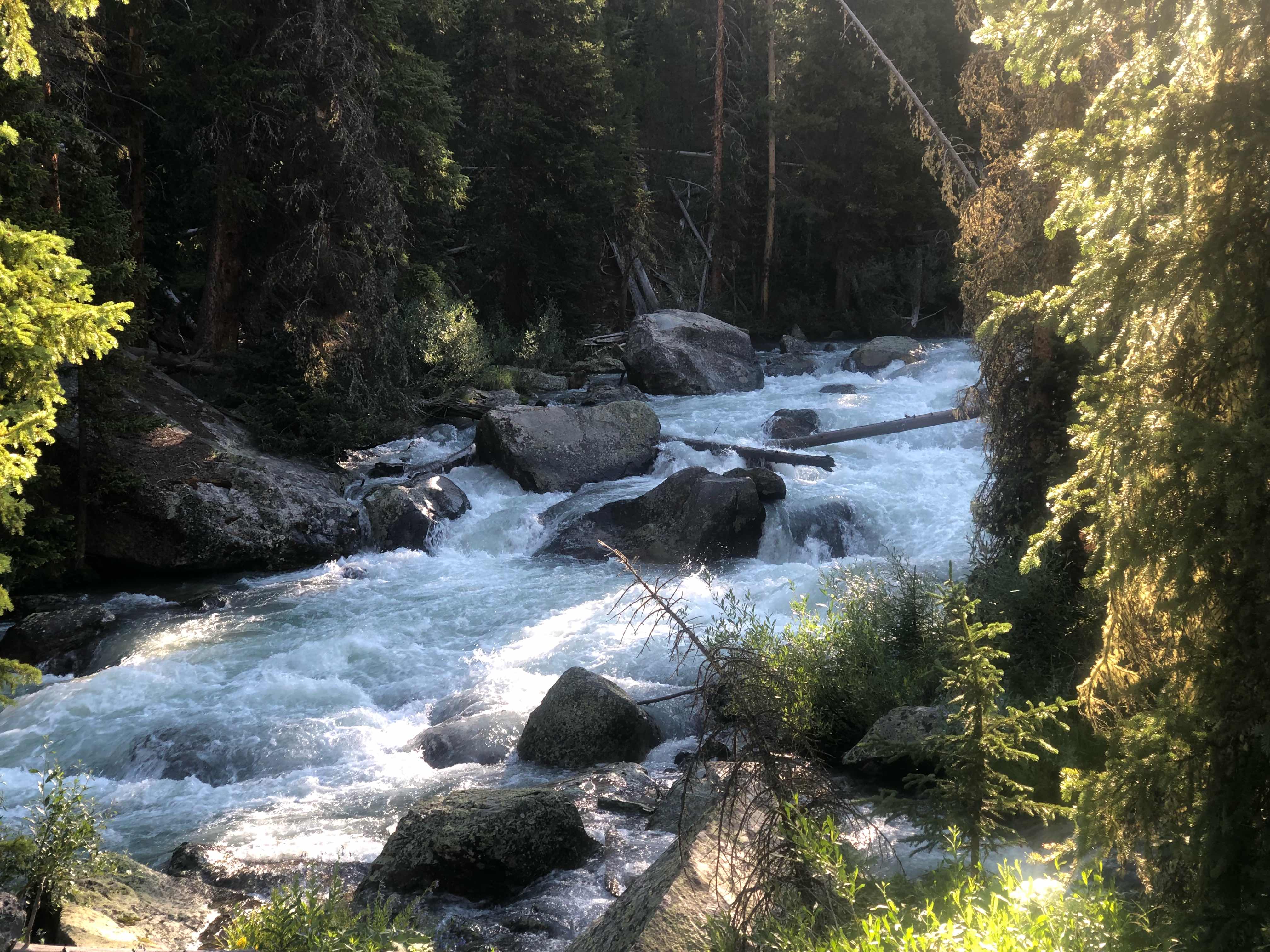 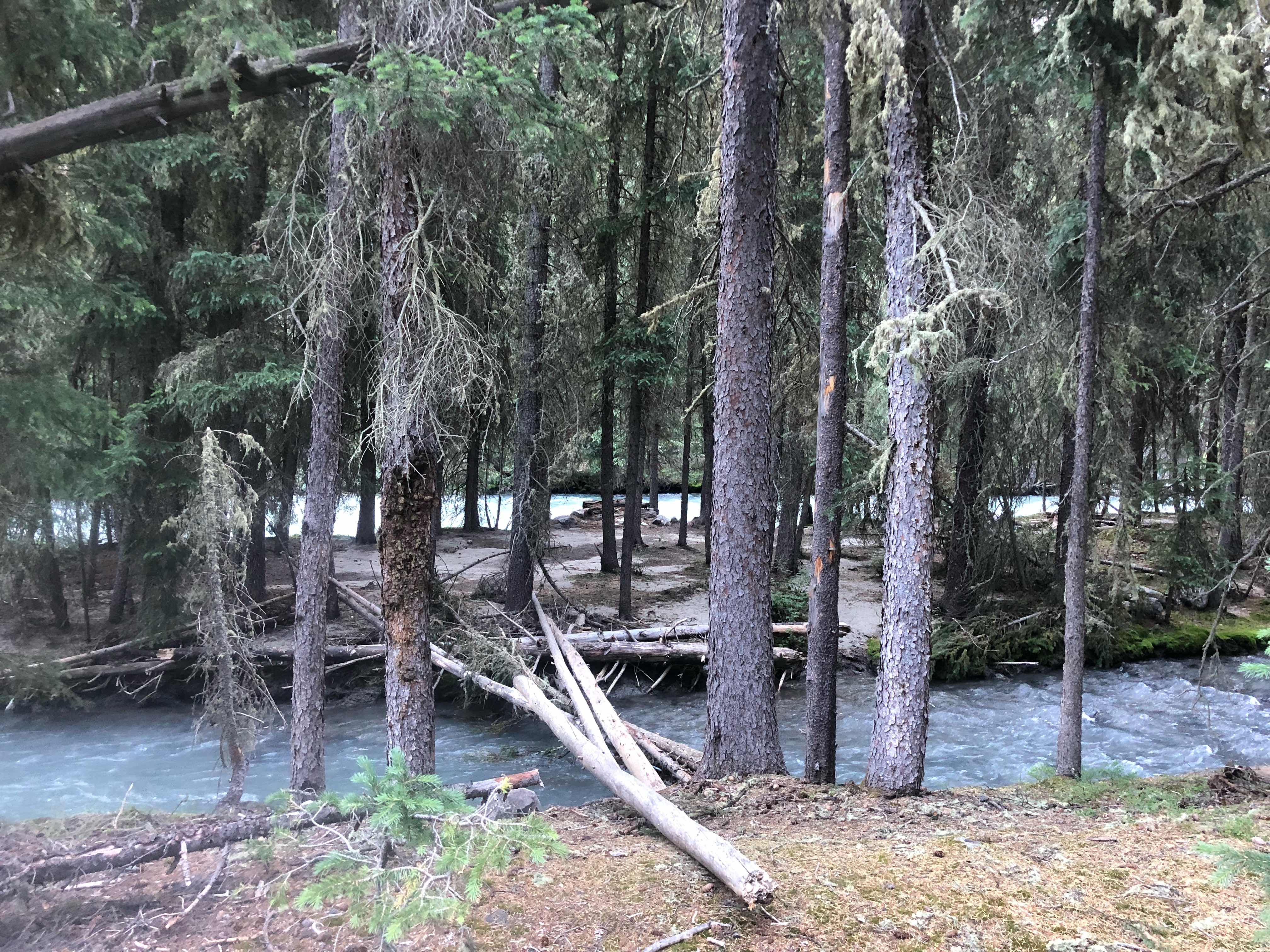 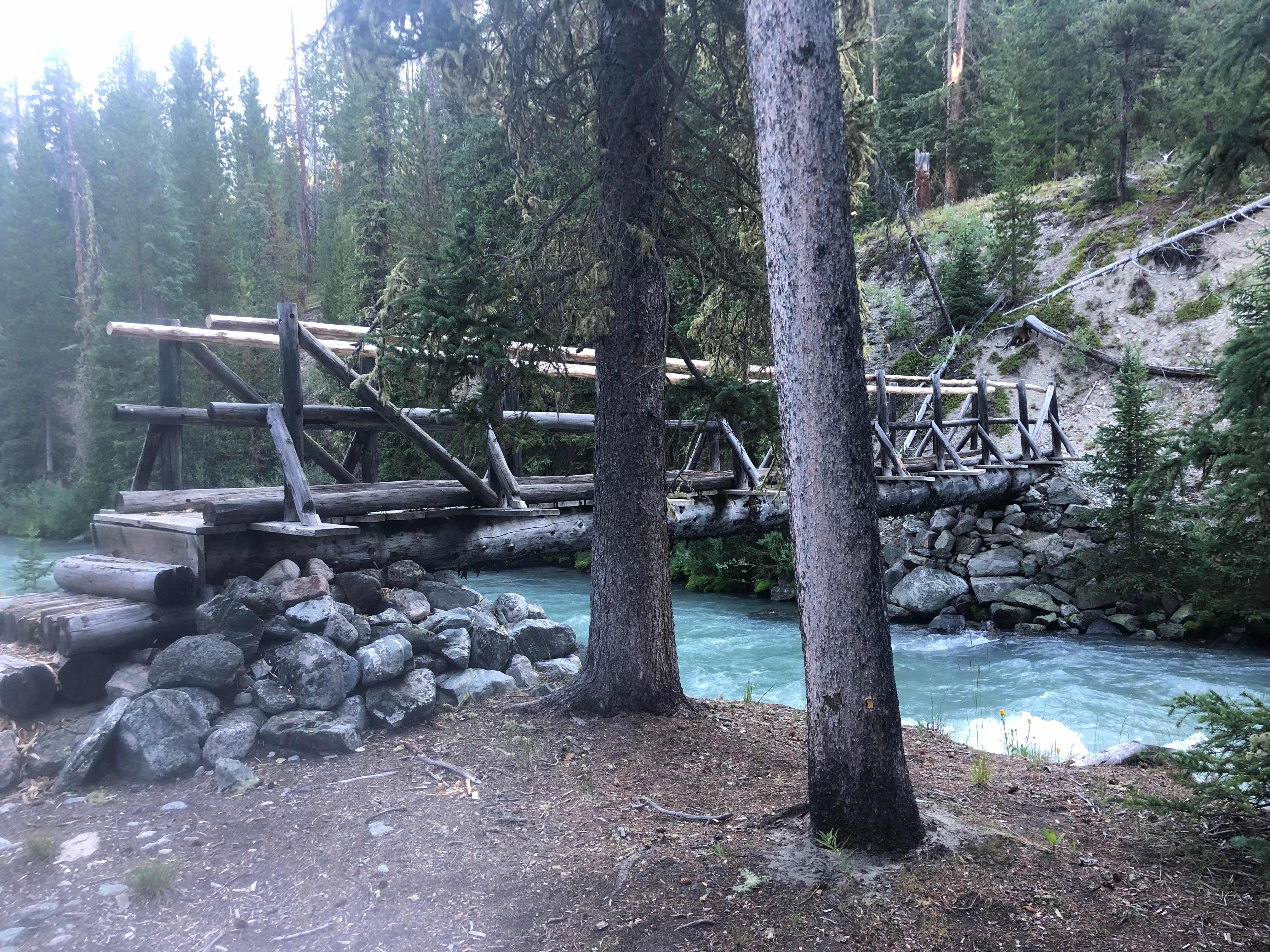 Luxurious bridge
I spent most of the morning following the aptly named Green River through the Green River Valley. It was easy hiking and beautiful. It was shaping up to be a glorious day. The sun was shining and there was a gentle breeze. I passed by a lot of day hikers and quite a few wanted to stop and chat. I was really trying to make miles, but I didn’t want to be rude. Two of the couples I talked with were very intrigued by what I was doing. They had never met a thruhiker before and had a ton of questions. The first question people always ask me is if I am doing this alone. I’m not sure why people always get hung up on the fact that a single woman could ever consider hiking so far by themselves. I wonder if the male hikers get asked this questions as frequently as women do? 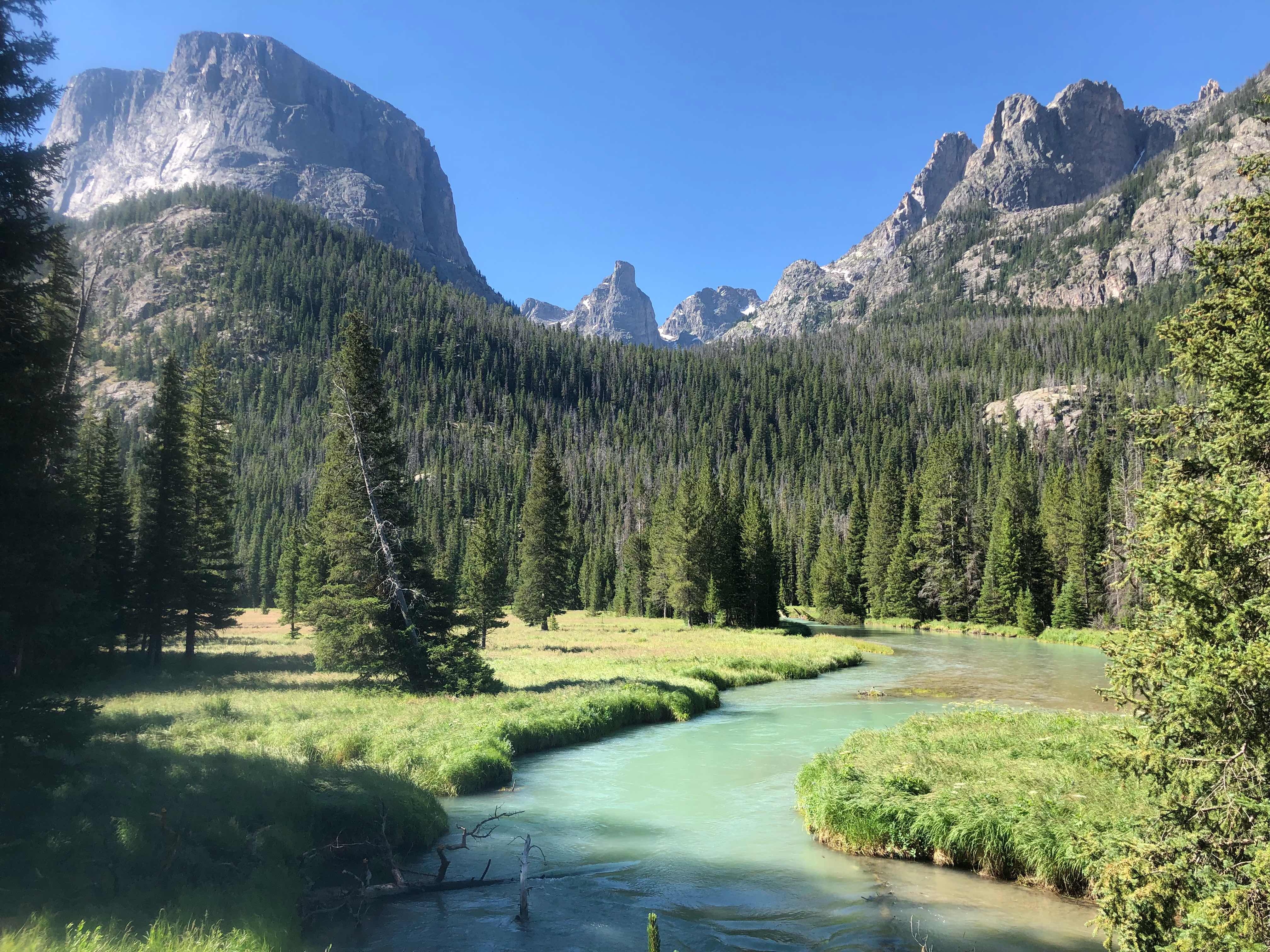 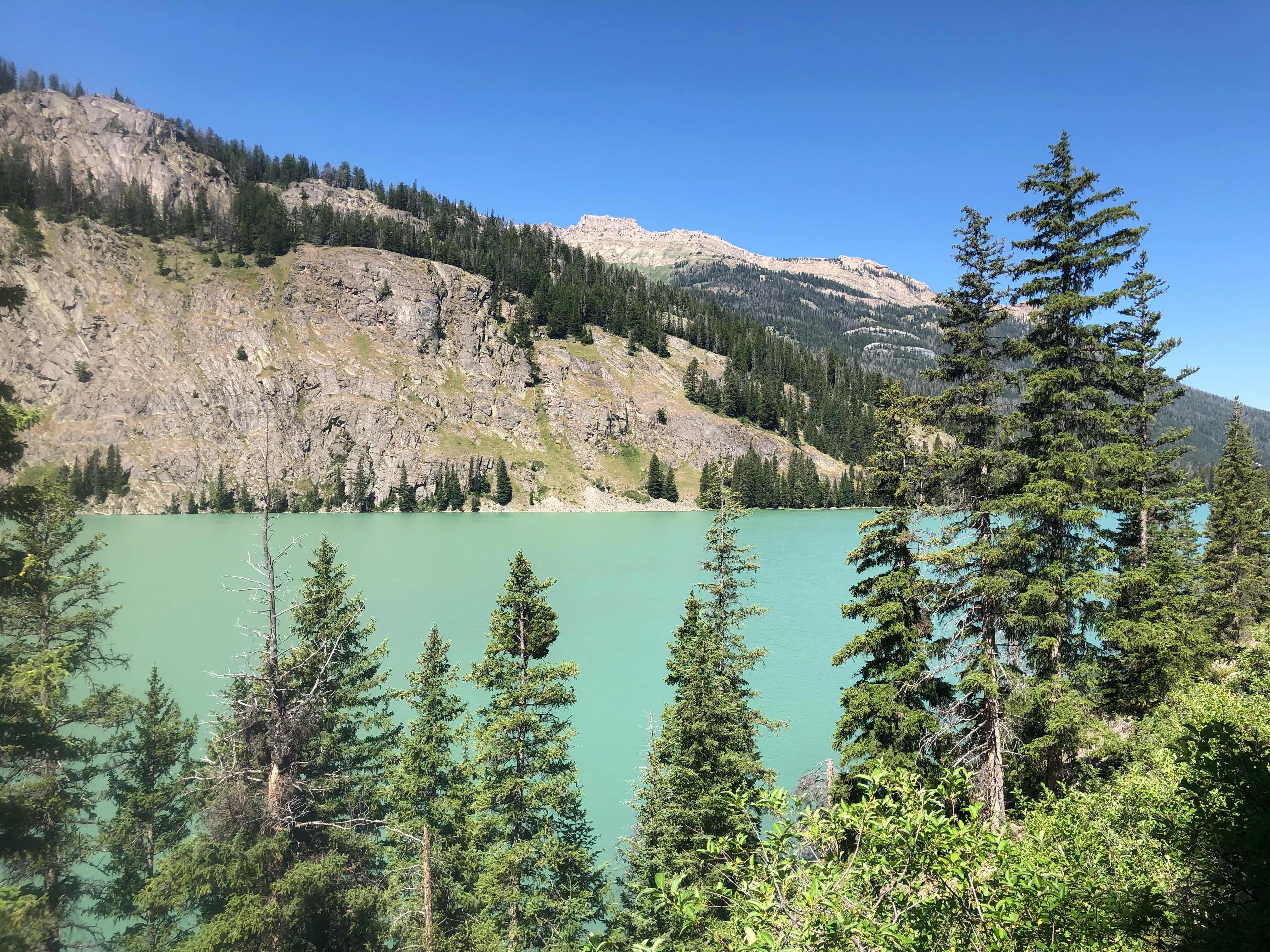 Green River Lake
Once I started hiking up out of the Green River Valley things really began to change. Gone were my views of craggy snow covered mountains and beautiful alpine lakes. It was like being back in the Great Basin, also referred to as the Red Desert. I hiked through sagebrush and thorny bushes. It wasn’t long before my shins were cut to shreds. I haven’t experienced hiking like that since the Gila River. I thought about putting my pants on, but it was way too hot for that. I just sucked it up and walked through. The trail was horrendously overgrown, which made it difficult to follow and gave me a slight feeling of claustrophobia. After hiking through the heart of the Wind River Range it was quite the come down. I was amazed by how quickly things changed. I wasn’t mentally prepared for the new terrain. The area I was was hiking through was covered with wildflowers. I was really enjoying walking through them except for the rose bushes with their thorns. It wasn’t very long before I realized that biting flies also enjoyed fields of flowers. Anytime I paused or took a break they would descend and beginning biting me. The experience was infuriating. There was nothing I could do to protect myself. I tried using deet, but in my rush to apply it I got some on my glued up wound. Having done that once before I knew that the feet would dissolve the glue. I rinsed it with water, and the damage was minimal. The flies were not deterred by the deet in the slightest. 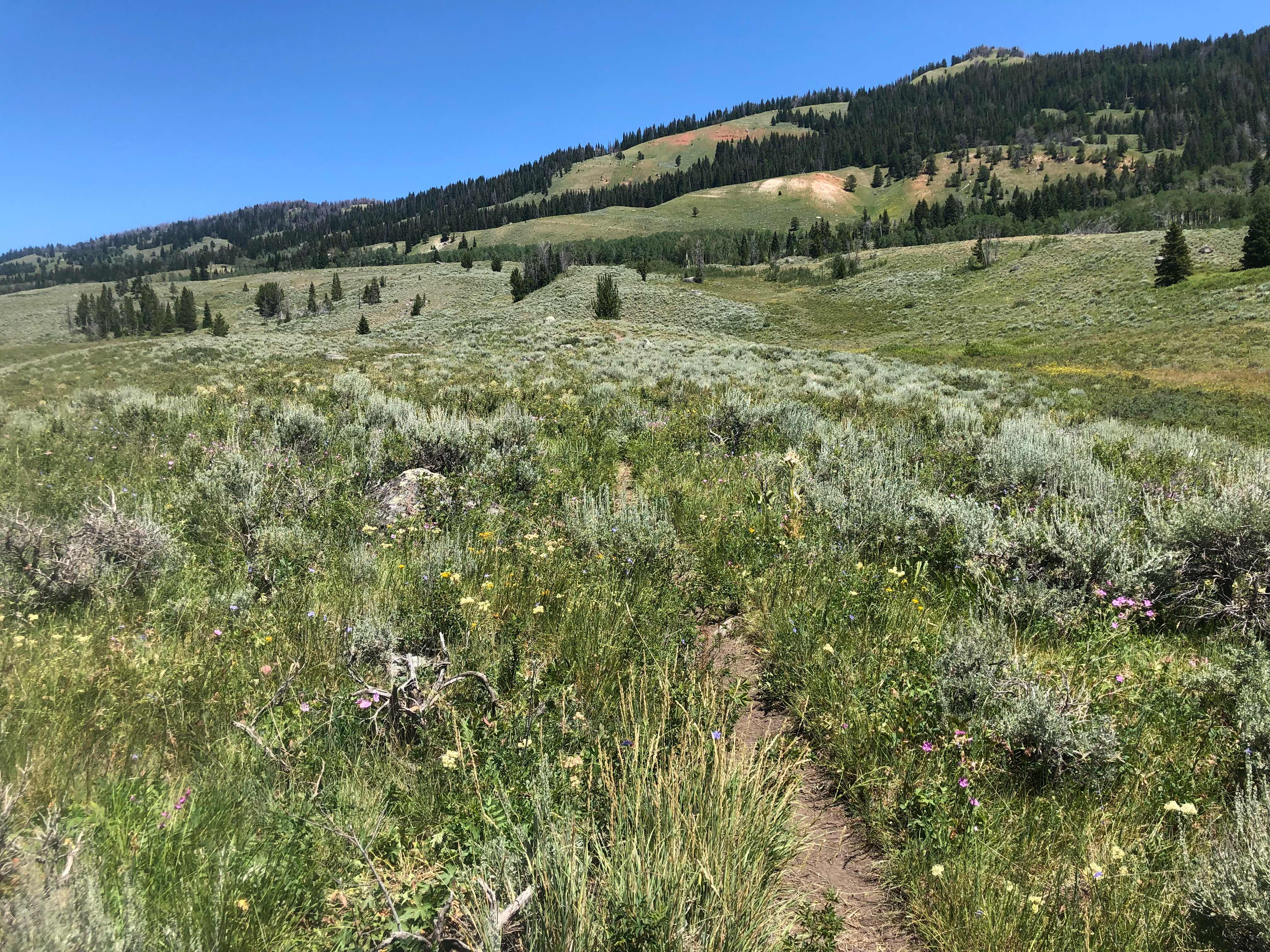 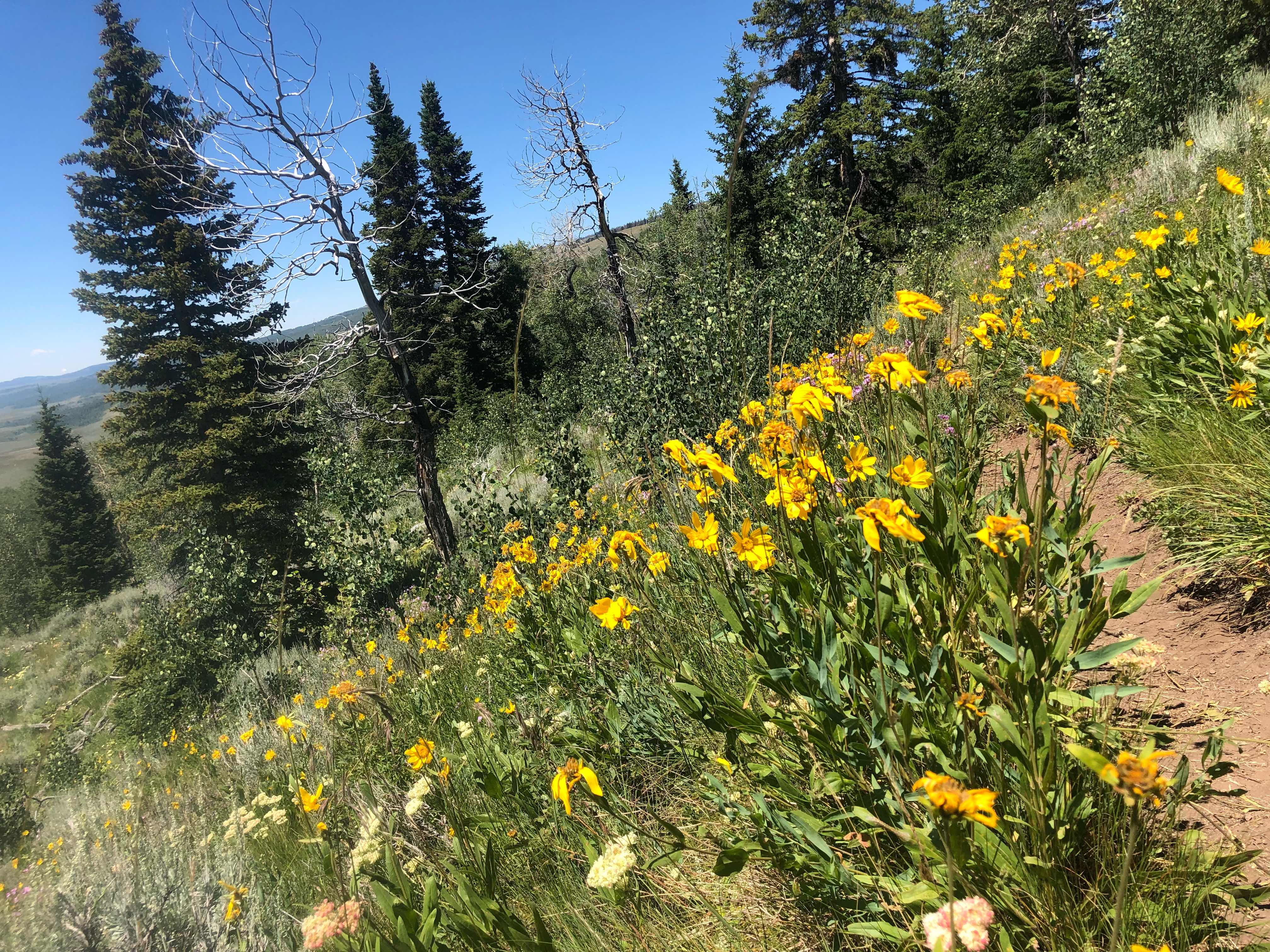 Pretty flowers, horrible flies
The rest of the day was keep your head down and just walk kind of hiking. I went through a few heavily forested areas with scummy ponds. I thought I had experienced the worst of the mosquito swarms a few days ago, but I was wrong. This was like nothing I have ever experienced before. I hiked through actual clouds of mosquitos. It was so dense I was brushing them away and it felt like moving a curtain aside. I hiked as fast as I could, but there was no relief. I didn’t stop for over three and a half hours and I didn’t take a single picture. Eventually the trail came back out into the open. The mosquito hordes became more manageable. It was getting late in the day and I needed to find a spot to camp. Of course I couldn’t find anything for a long while. I was getting ready to go back into the forest and there was no way I was going to camp in mosquito hell. I found a nice flat spot among the sagebrush. It was after eight thirty and the sun was beginning to set. I thought about cowboy camping, but there were just enough mosquitos still out that I set up my tent. Since I’m making a few more miles per day than expected I have a little extra food. I rewarded myself for a job well done today by eating two extra snickers. A snickers bar really does make everything seem better. 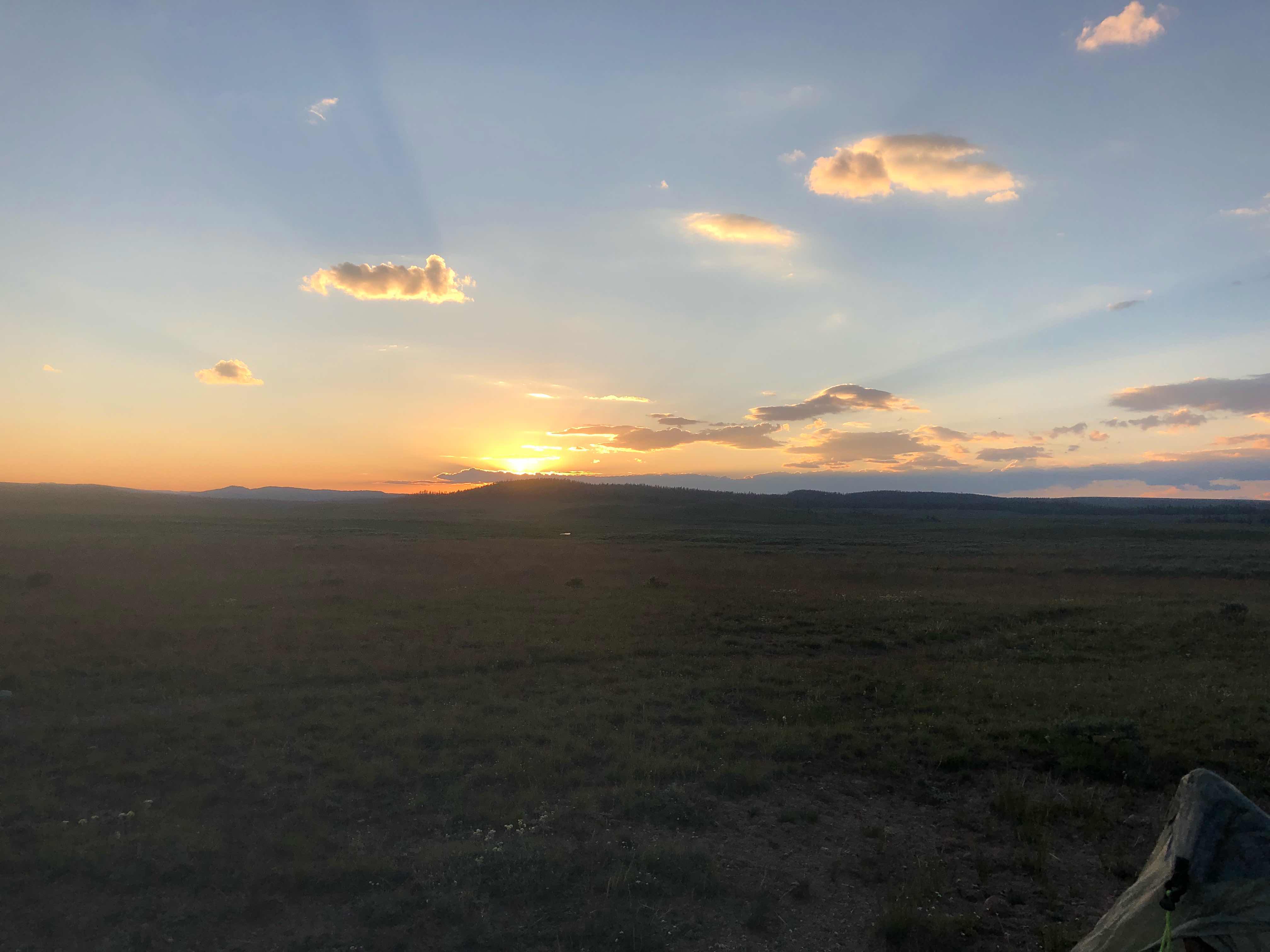 Sunset from camp
“When you leave home to follow your dreams, your road will probably be riddled with potholes, not always paved in happy Technicolor bricks. You'll probably be kicked to the ground 150 million times and told you're nuts by friends and strangers alike. As you progress you may feel lonely or terrified for your physical and emotional safety. You may overestimate your own capabilities or fail to live up to them, and you'll surely fall flat on your face once in a while.”
- Kelly Cutrone