My day started off so well. I had a very unique experience around four o’clock in the morning. I heard footsteps very close by and I came to immediately. I saw a white blur close to where I was cowboy camped. I let out some kind of exclamation and the next thing I knew something behind me jumped over me. It was a mountain goat! There were several grazing right next to me. How cool, a freaking mountain goat jumped over me! I was able to get another hour and a half of sleep before it was go time. I knew today would challenge me, but I had no idea how much I would be pushed to my limit. I thought that I would hike the 6.6 miles to summit Gray’s peak in no time. Gray’s is the tenth highest peak in the lower 48. I have already hiked the first and second highest and they were both pretty easy. I had a long gradual climb up to the summit of Mt. Edwards, which was just under 14,000 feet. About half way up the climb my pack was digging into my back in a weird way. I stopped to take a look at what was going on. Part of the frame that supports the weight of my pack had broken yesterday during my fall. I spent close to an hour trying to fix it. I knew that it could be fixed, but I couldn’t figure out how to do it. I decided to just let it be and get going. 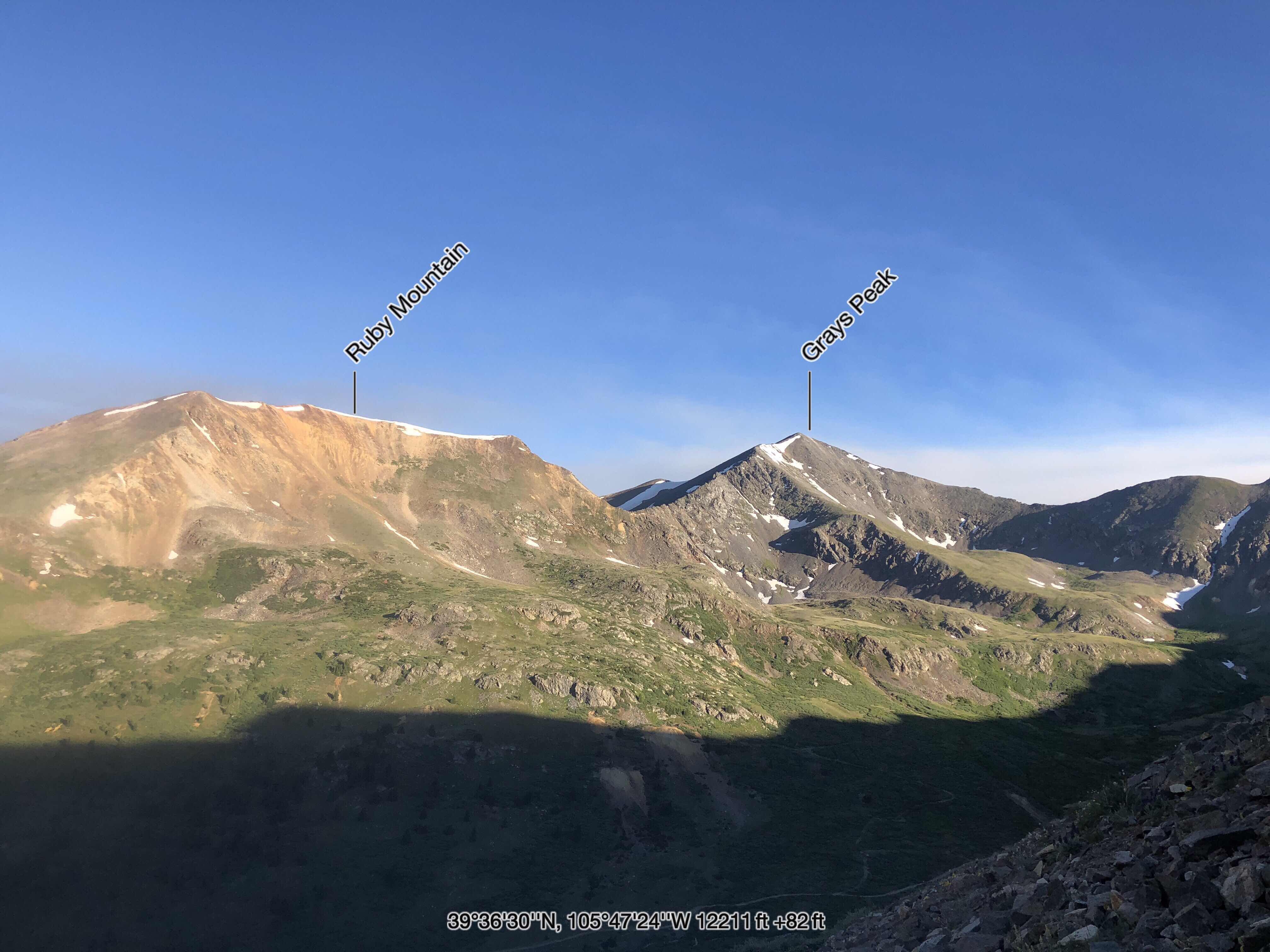 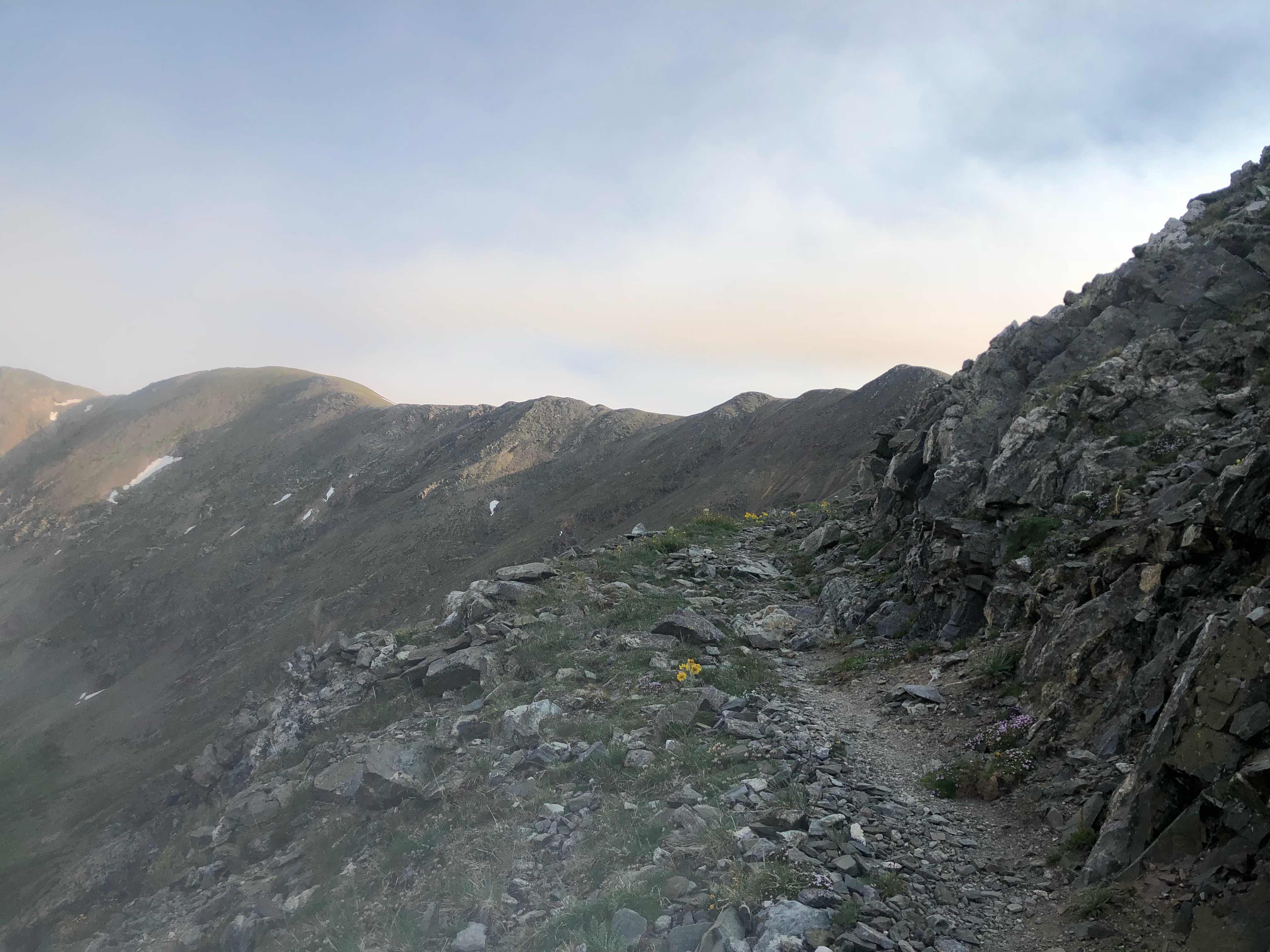 Ridge that I followed
The hike up to Gray’s was very interesting. I hiked up to 13,000 feet and then followed the spine of the mountain ridge. The path was nice and wide and within my comfort level. The wind had started to pick up and that was a little concerning. From what I could see if the trail leading up to Gray’s it looked challenging and slightly outside of my comfort zone. I spent the next few miles mentally preparing myself for what was coming. I kept telling myself that this was official CDT and how bad could it be. Thousands of people have hiked this same exact route, I could to. On the climb up to Mt. Edwards I ran into a bunch of mountains goats. They were not skittish at all. I got within feet of them before they mossied away. 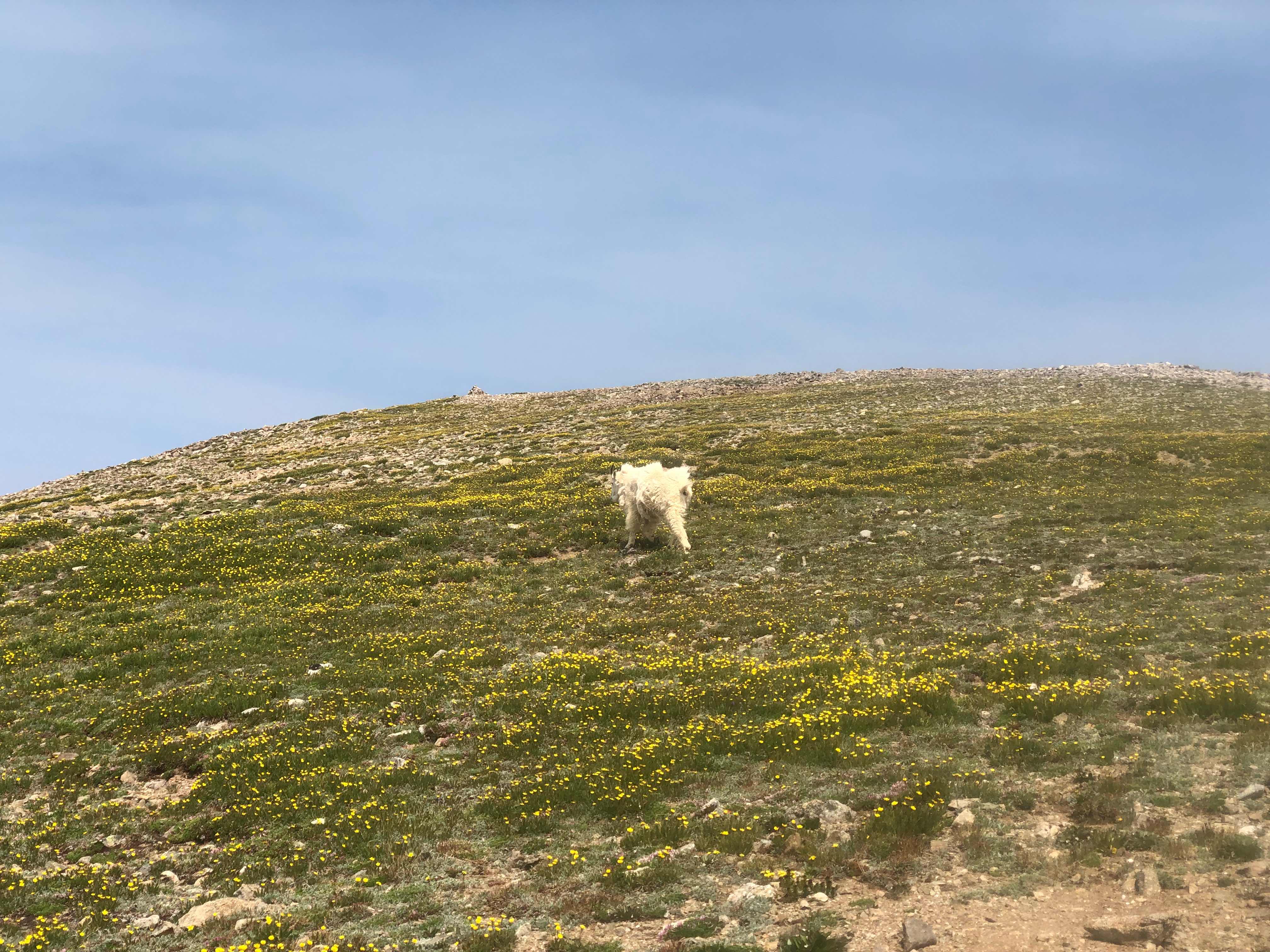 Mountain goat
As soon as I made the summit of Mt. Edwards I knew that I had a problem. The view in front of me scared the crap out of me. There was no visible trail, just a knifes edge ridge connected to Gray’s. There was no way that this could be the official cdt, but it was. I was 100% sure that this was the correct trail. I gathered up my courage and began to hike. Every few feet I had to stop. I just couldn’t believe that this was the route I had to take. 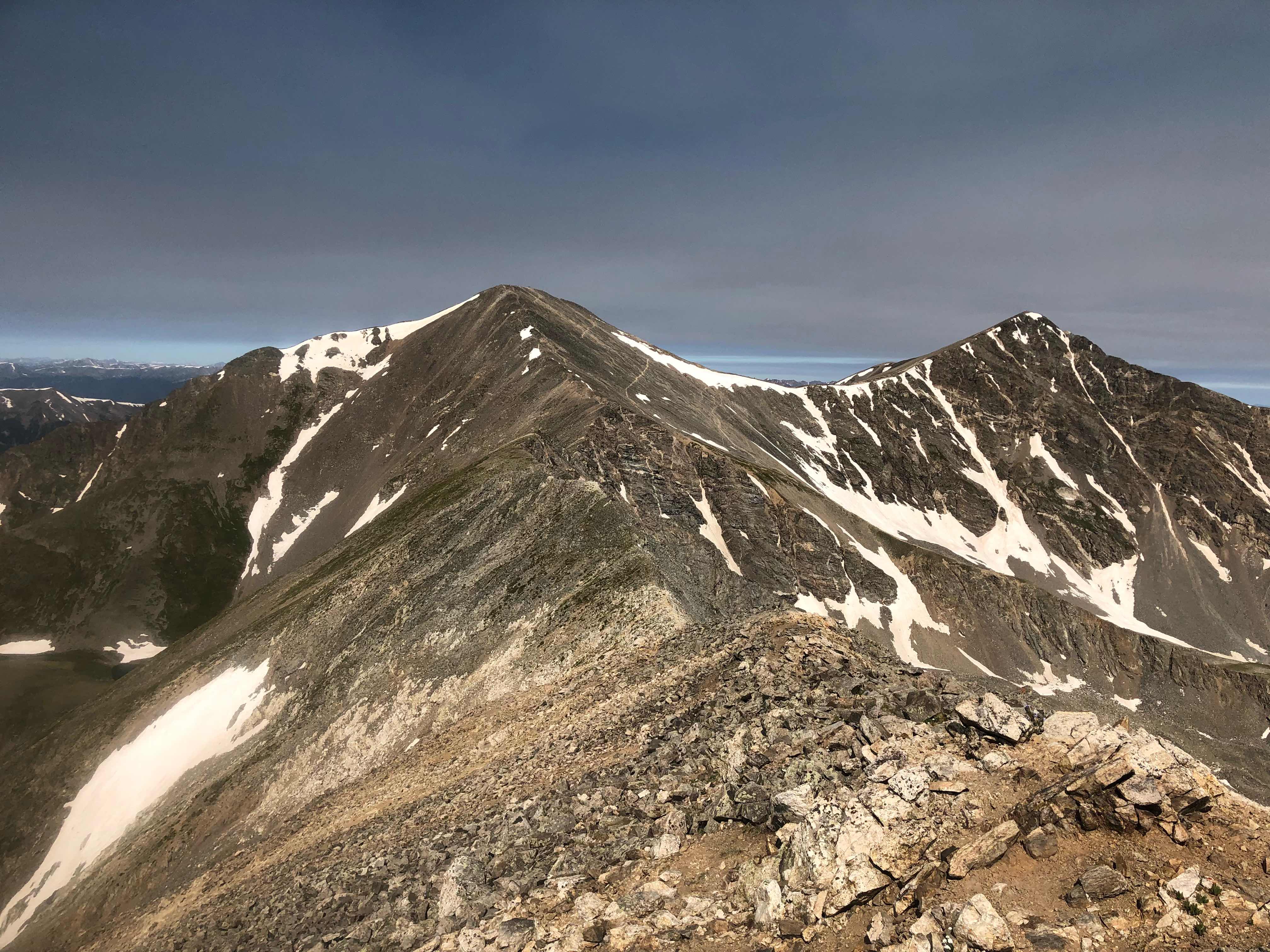 Are you kidding me
Well yesterday I promised that I wouldn’t do something so risky by myself ever again. I made the heart wrenching decision to turn around. After making that decision I texted my dad to let him know that everything was ok, but I would be turning around, then I sat down and cried for a few minutes. I was really embarrassed that I couldn’t do this section. As I started to go back the way I came I ran into Clouds and Ripple, a very nice married couple from England. They have a lot of mountain and climbing experience and said I should hike it with them. I decided to give it another go. I didn’t think it was an impossible route, just something I didn’t know how to do. We got to the point where I turned around at and they agreed that this was not a normal trail. Most of the people in the cdt do not have the experience or background to be do something like this. I hiked in between Ripple and Clouds and they made sure that I was safe. On the down climbs Ripple spotted my every footstep to make sure I wouldn’t fall. What I thought would take two hours to hike to closer to four hours. I was terrified for almost the entire thing. Finally we made it over the spine and began to climb to the actual summit. This part was easy. 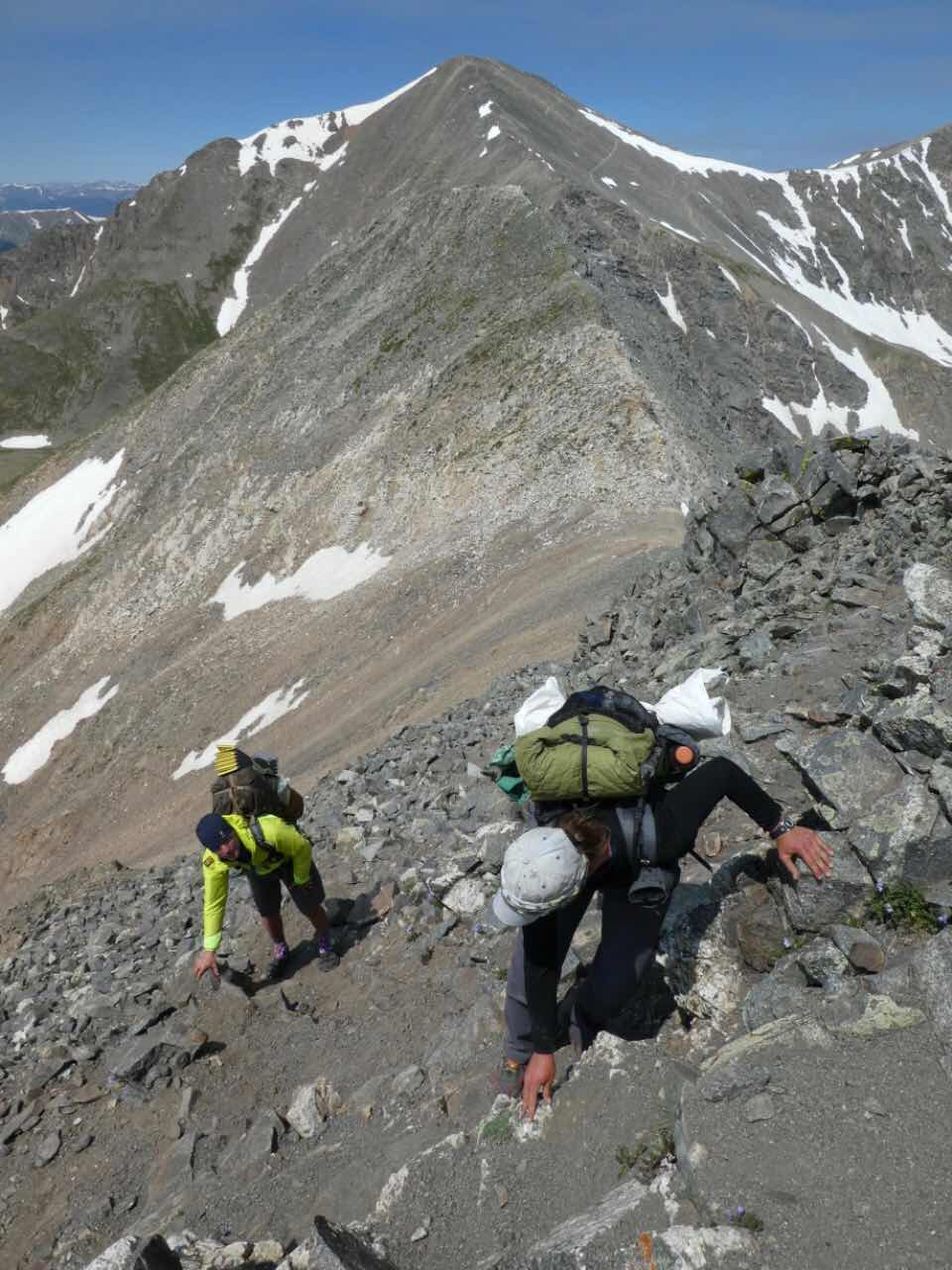 Ripple telling me where to put my foot 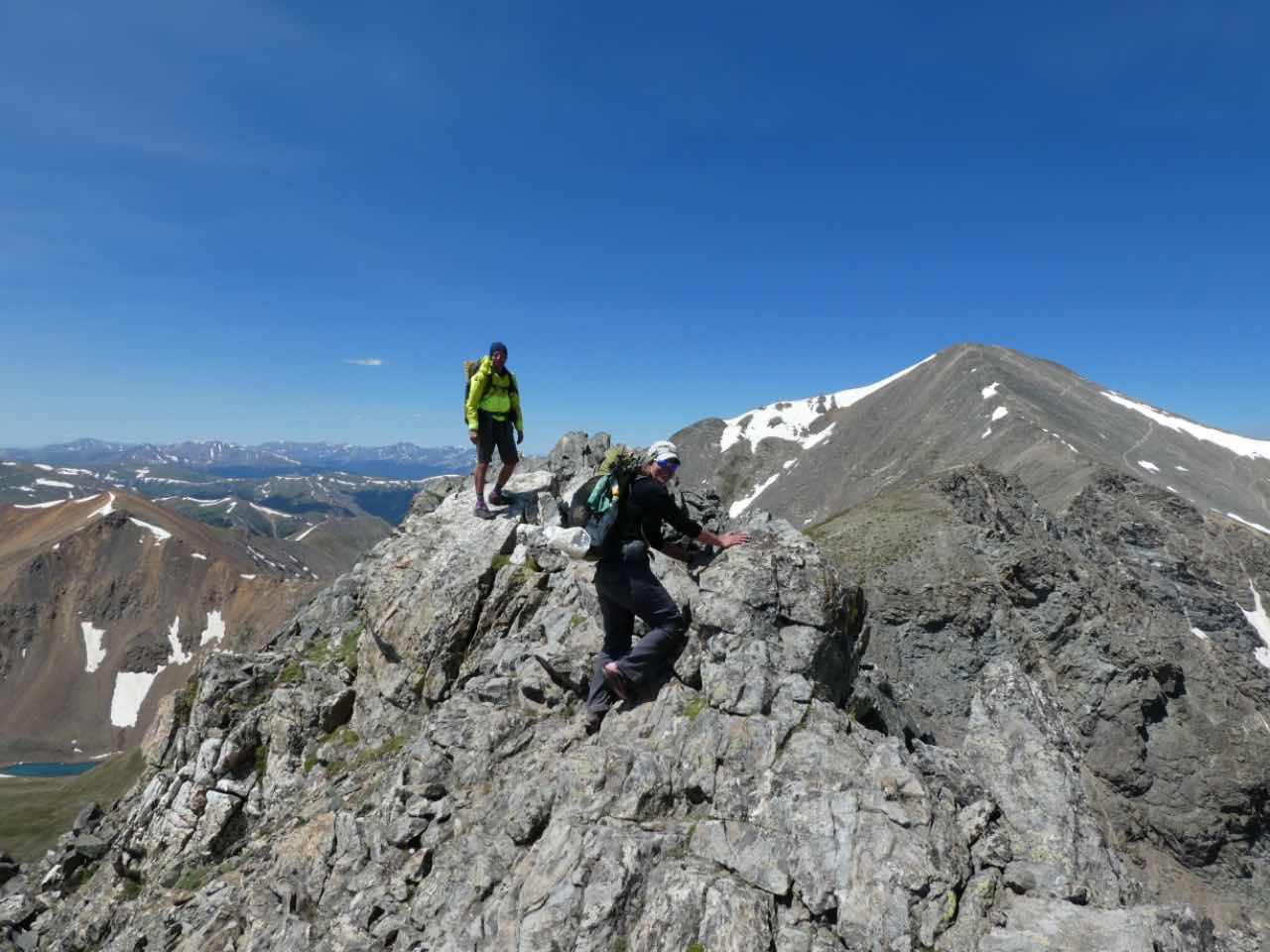 Trying to be brave 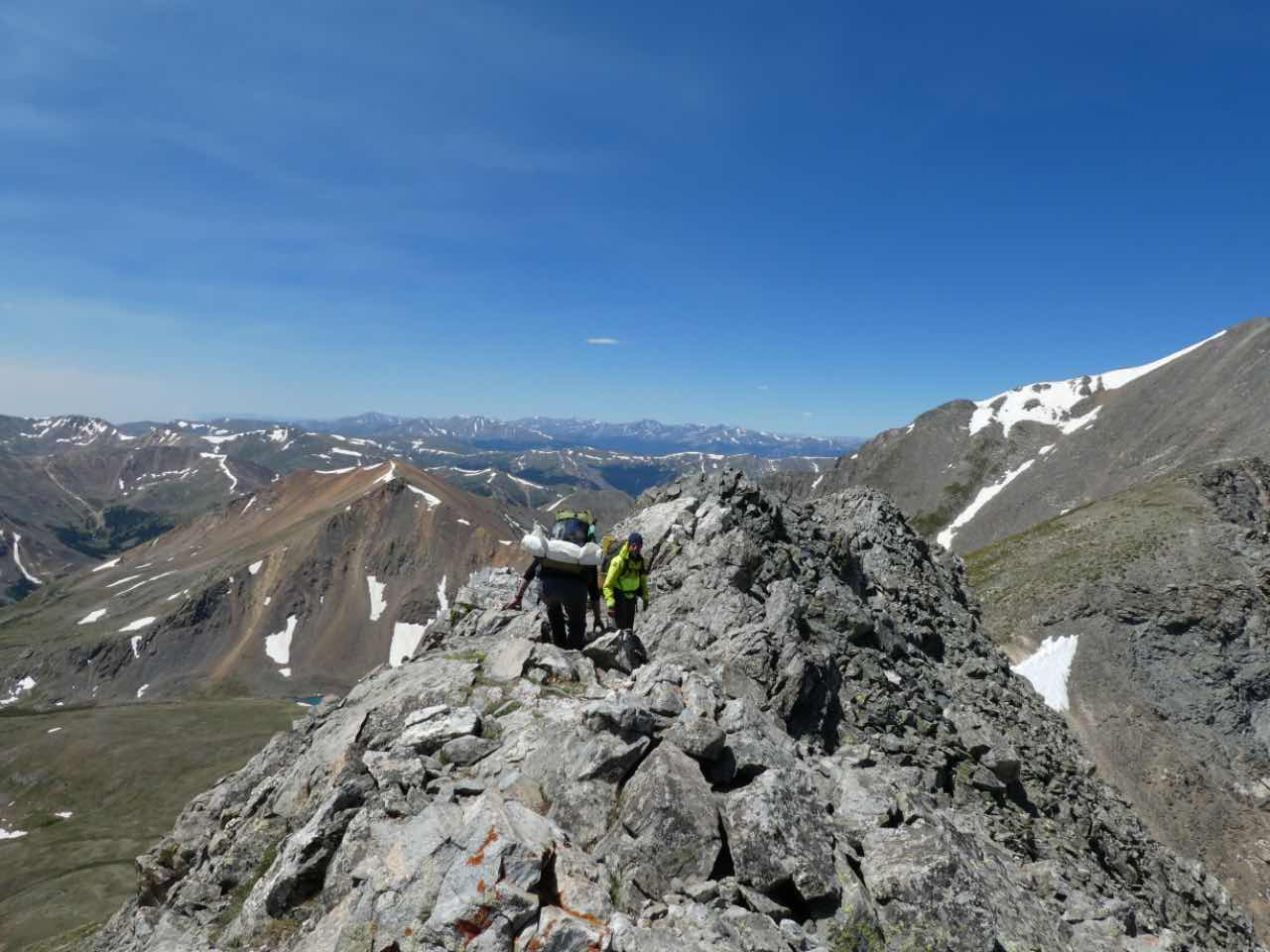 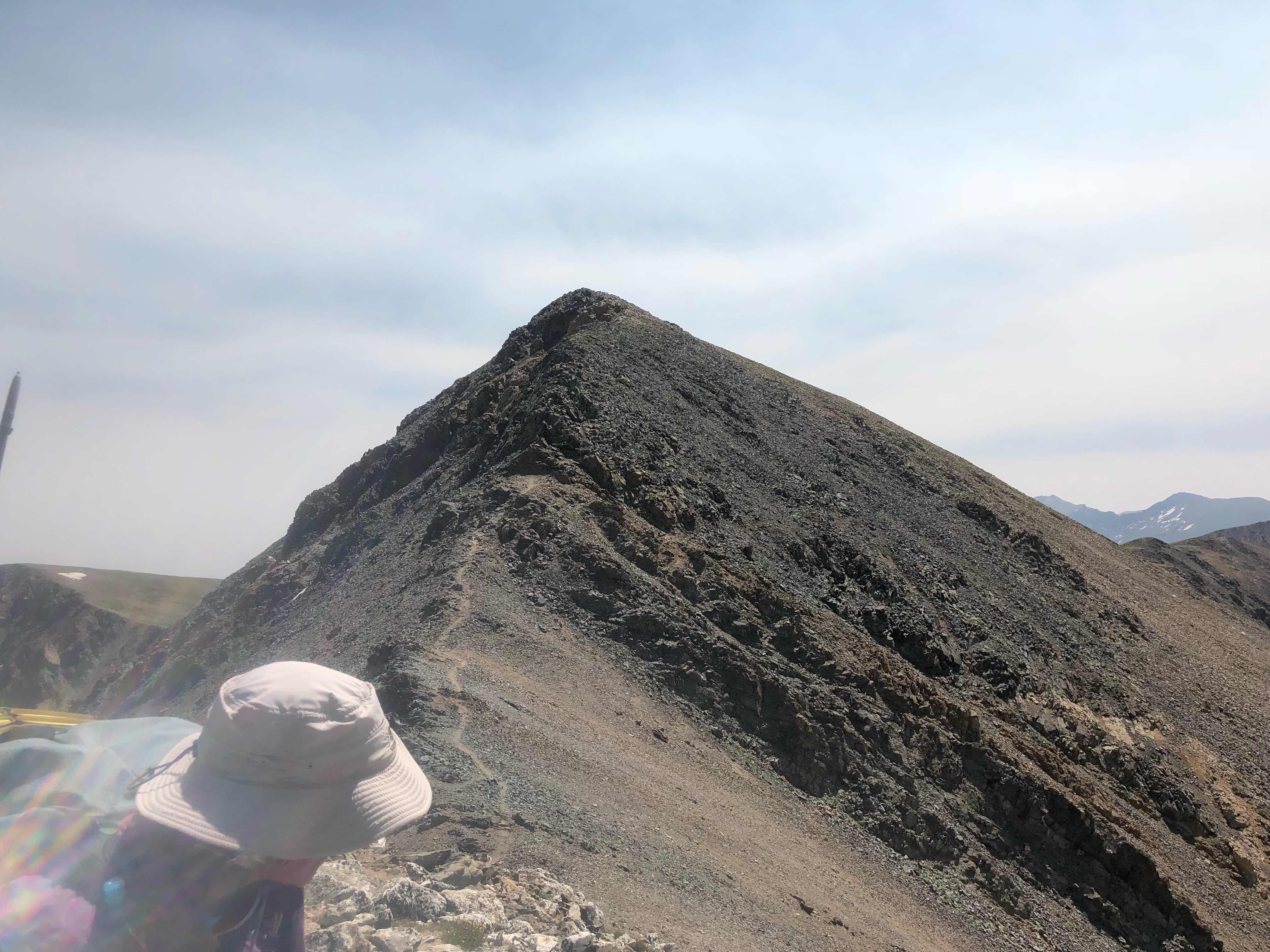 Summit of Mt. Edwards and the down climb 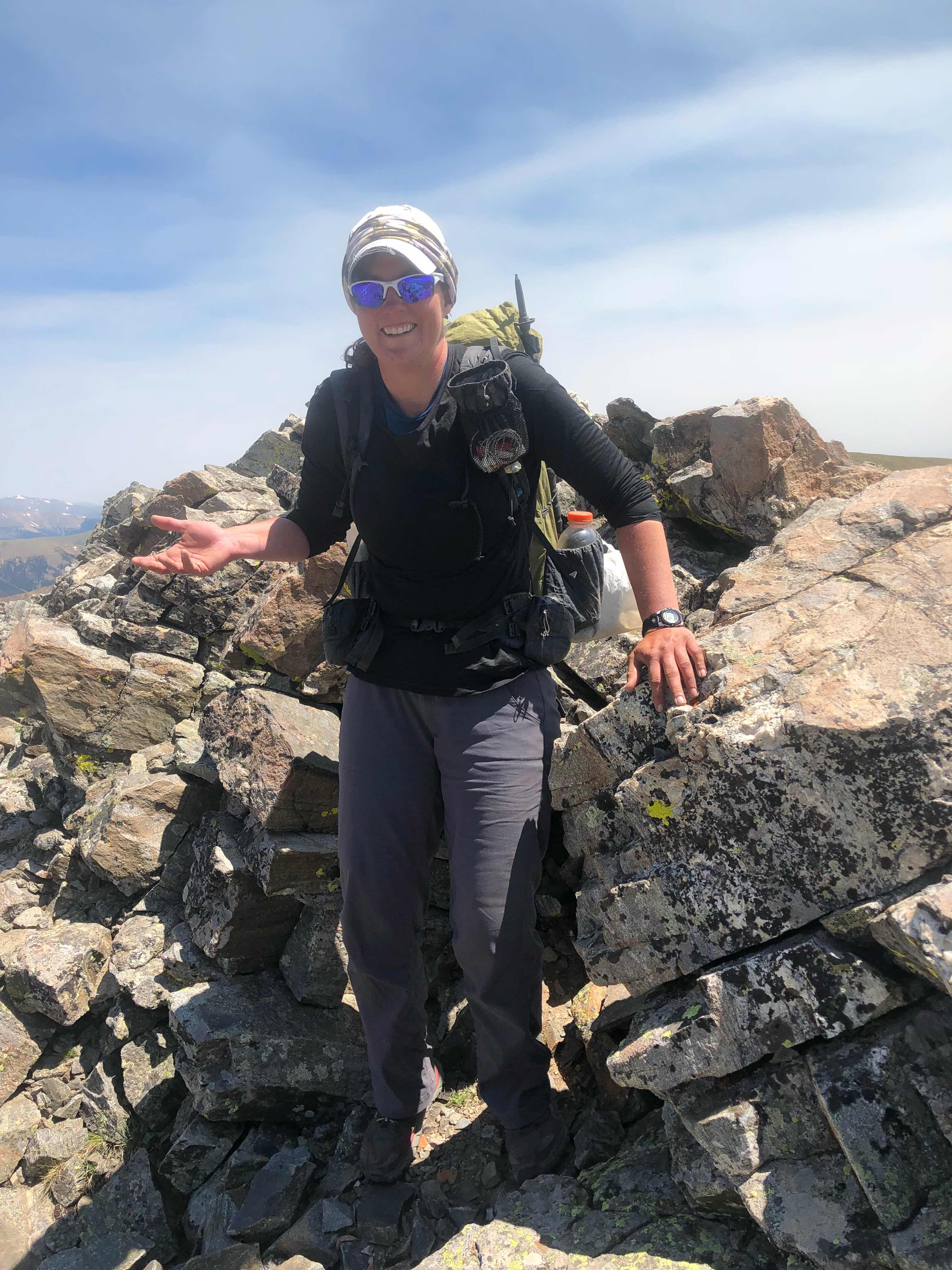 This was how wide the tread was 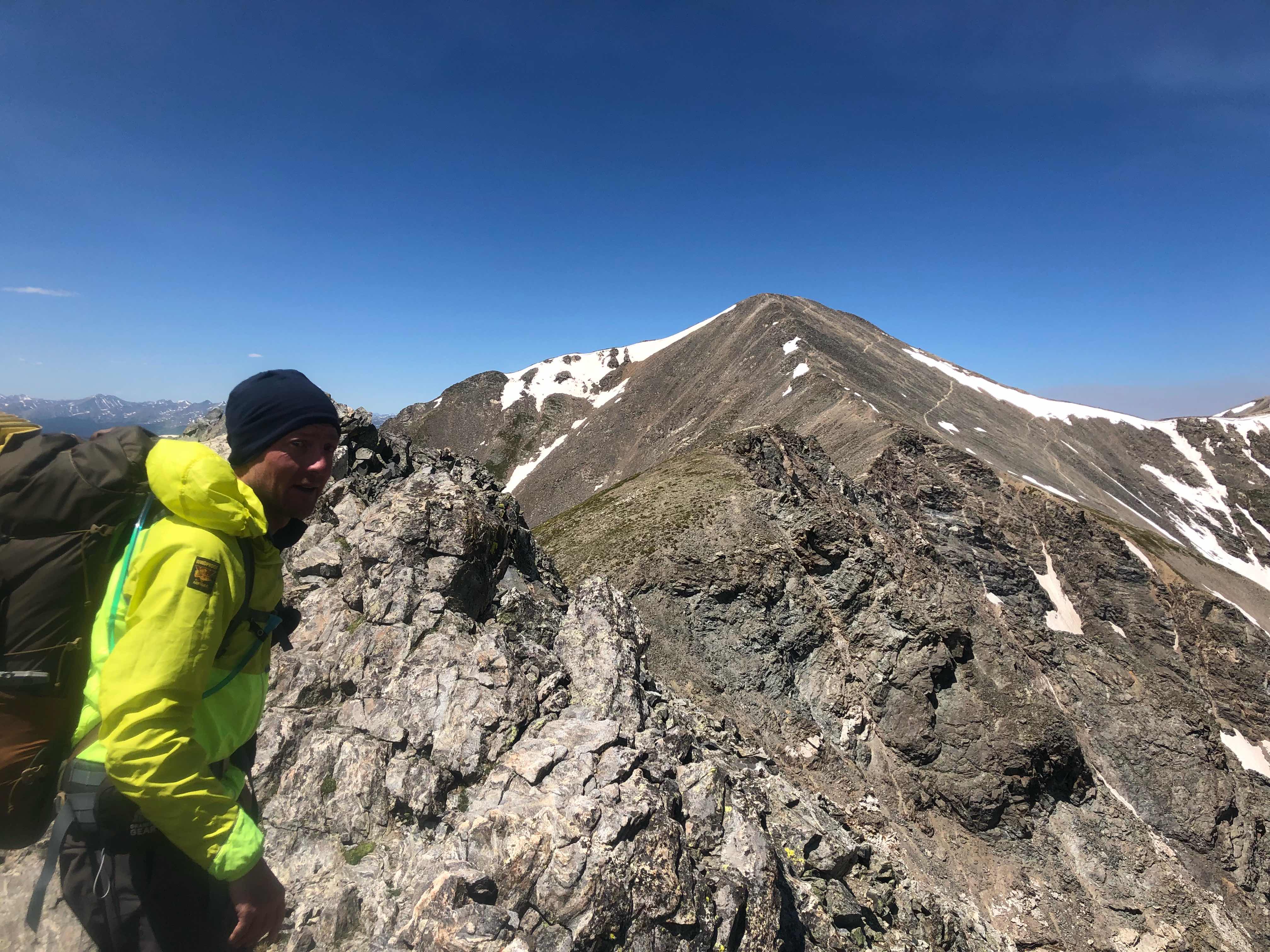 I can’t believe I did this
I was so relieved when we finally made it across the spine. I had planned on hiking to the summit of Torrey’s after Gray’s, but I was mentally spent. I was also several hours and miles behind schedule. I didn’t think I would have enough food to make it to my next stop. I decided to hitch into town early. I lingered on top of Gray’s as long as I could. My knees needed a break and I needed time to put my mind right. 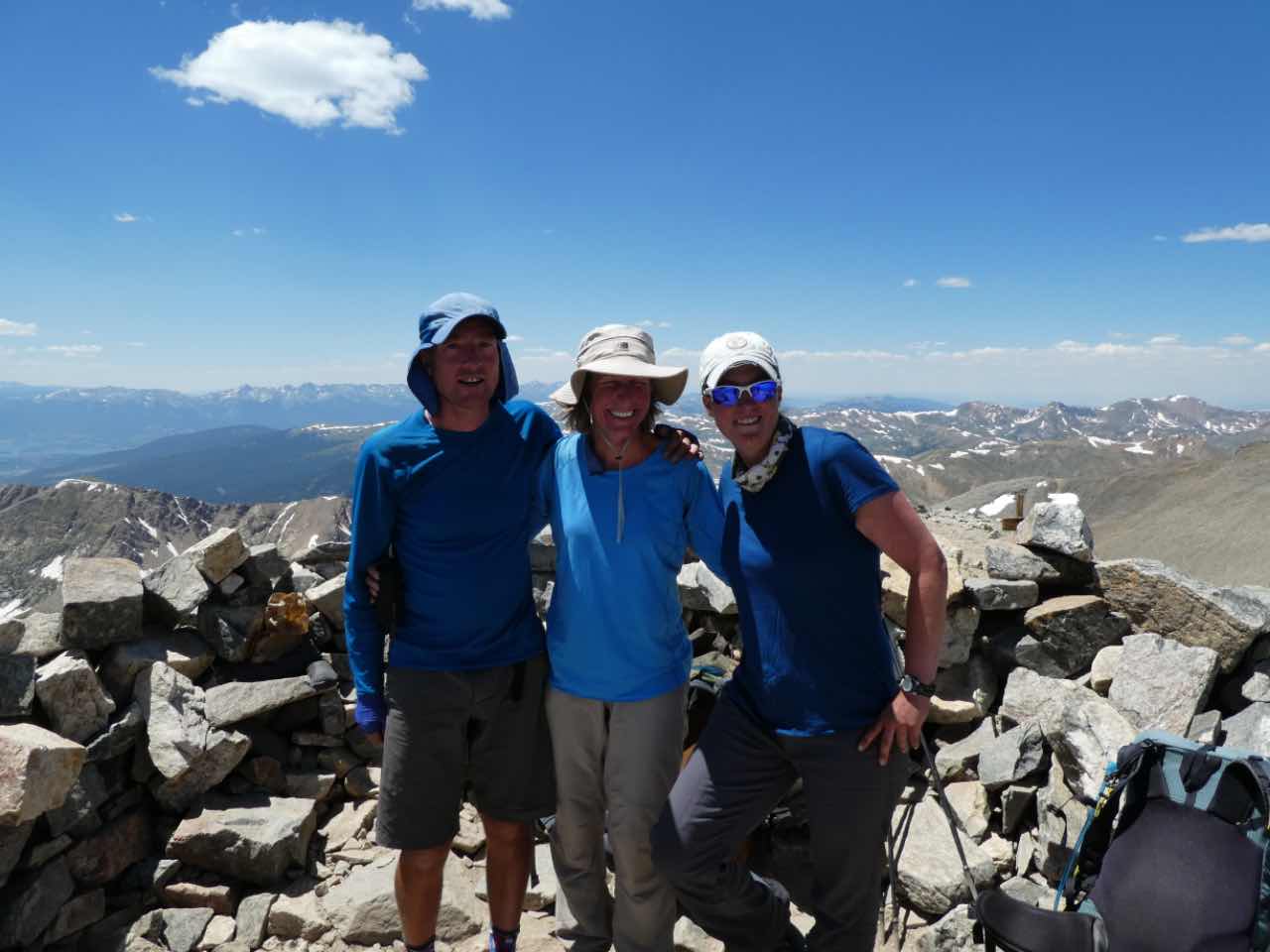 Ripple, Clouds, and myself. My heroes
I was glad that I didn’t have to skip trail, but I don’t think this should be the official trail. I found out after the fact that there was another trail up that most people probably take. What I hiked was something that was people skip. I couldn’t believe that I never came across info of how sketchy this was. One set of maps says, “This route is a knifes edge with lots of exposure and steep cliffs. Only attempt if you are comfortable with that kind of thing.” I really wish I had known that beforehand. 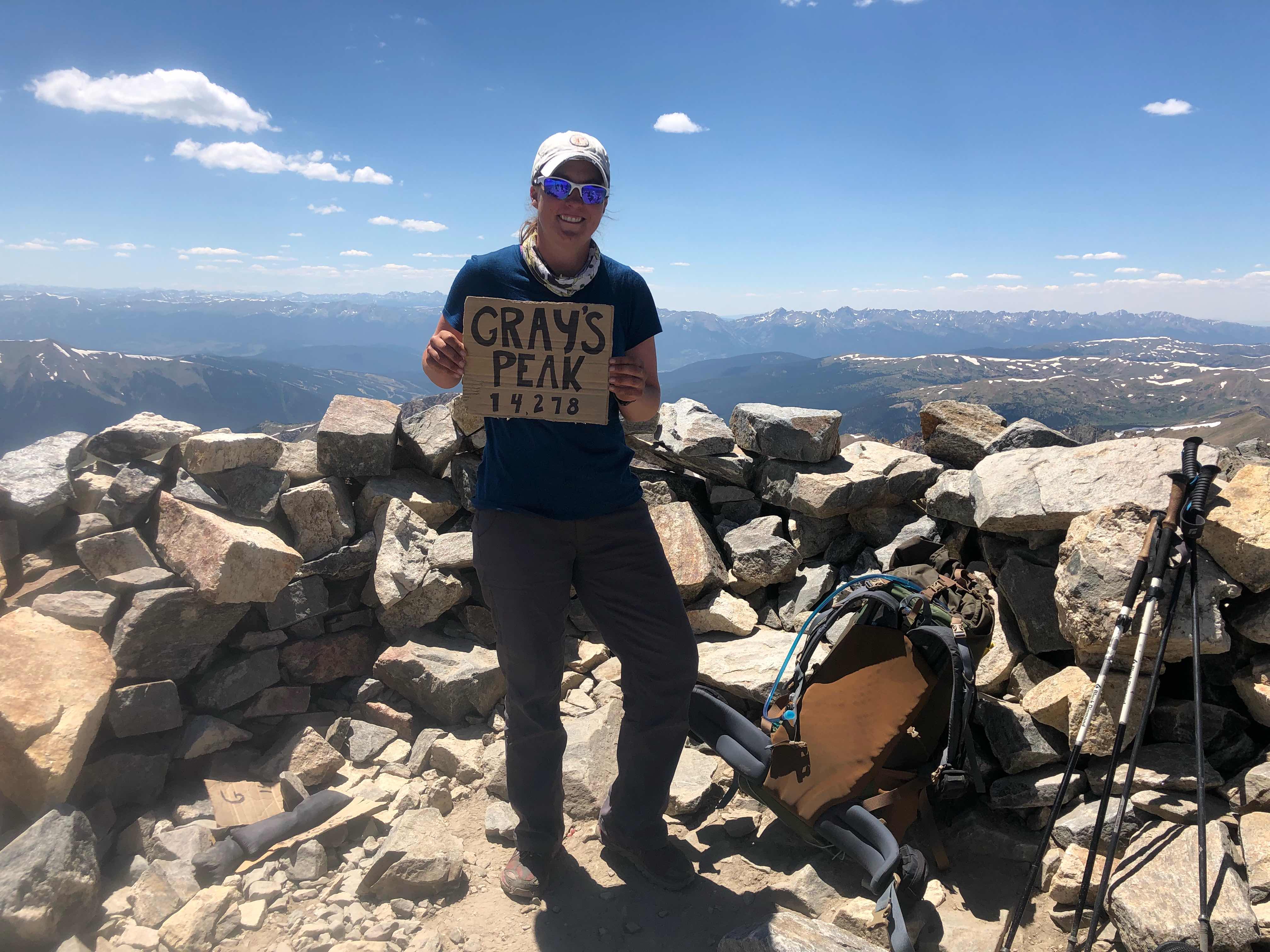 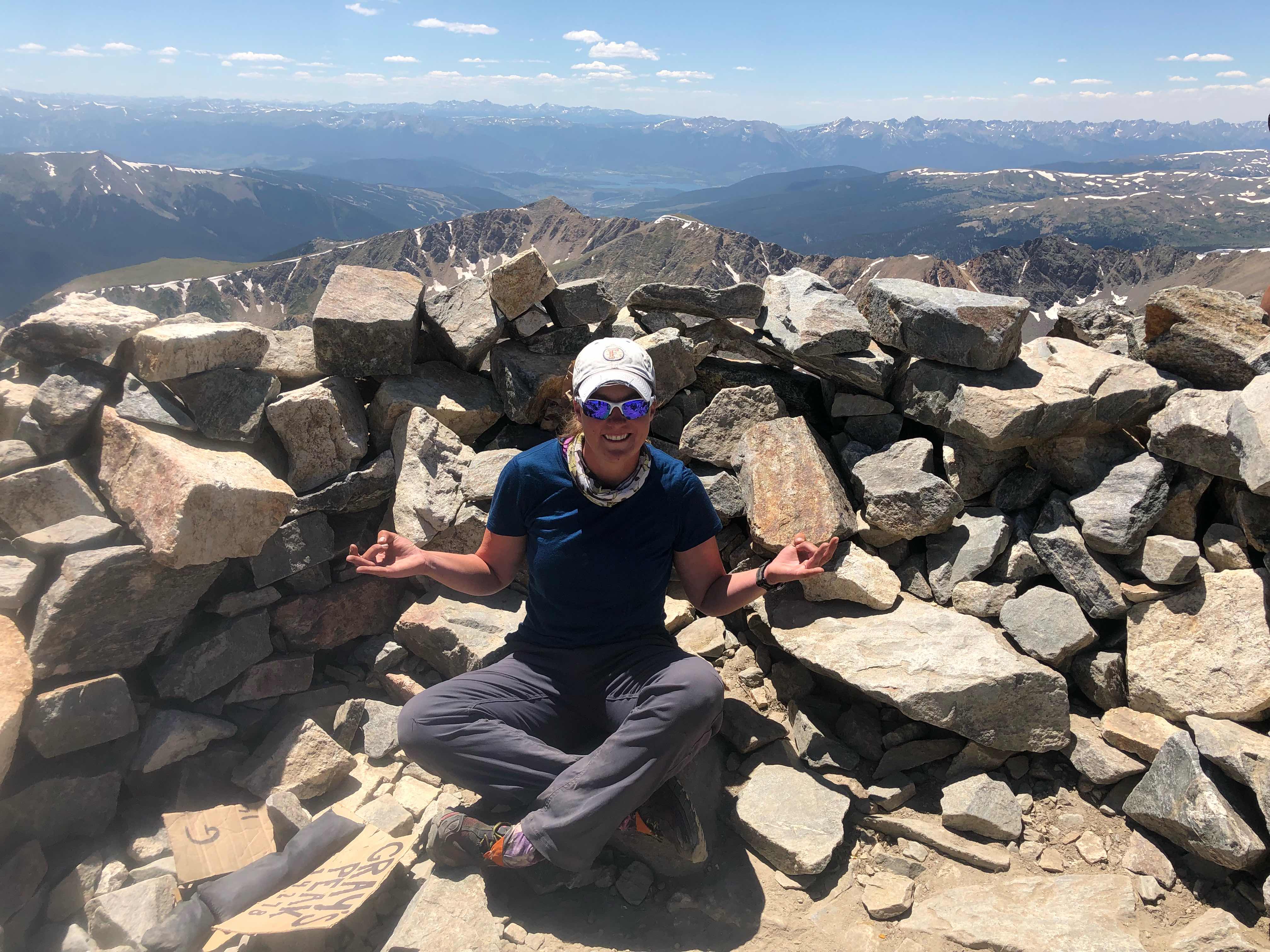 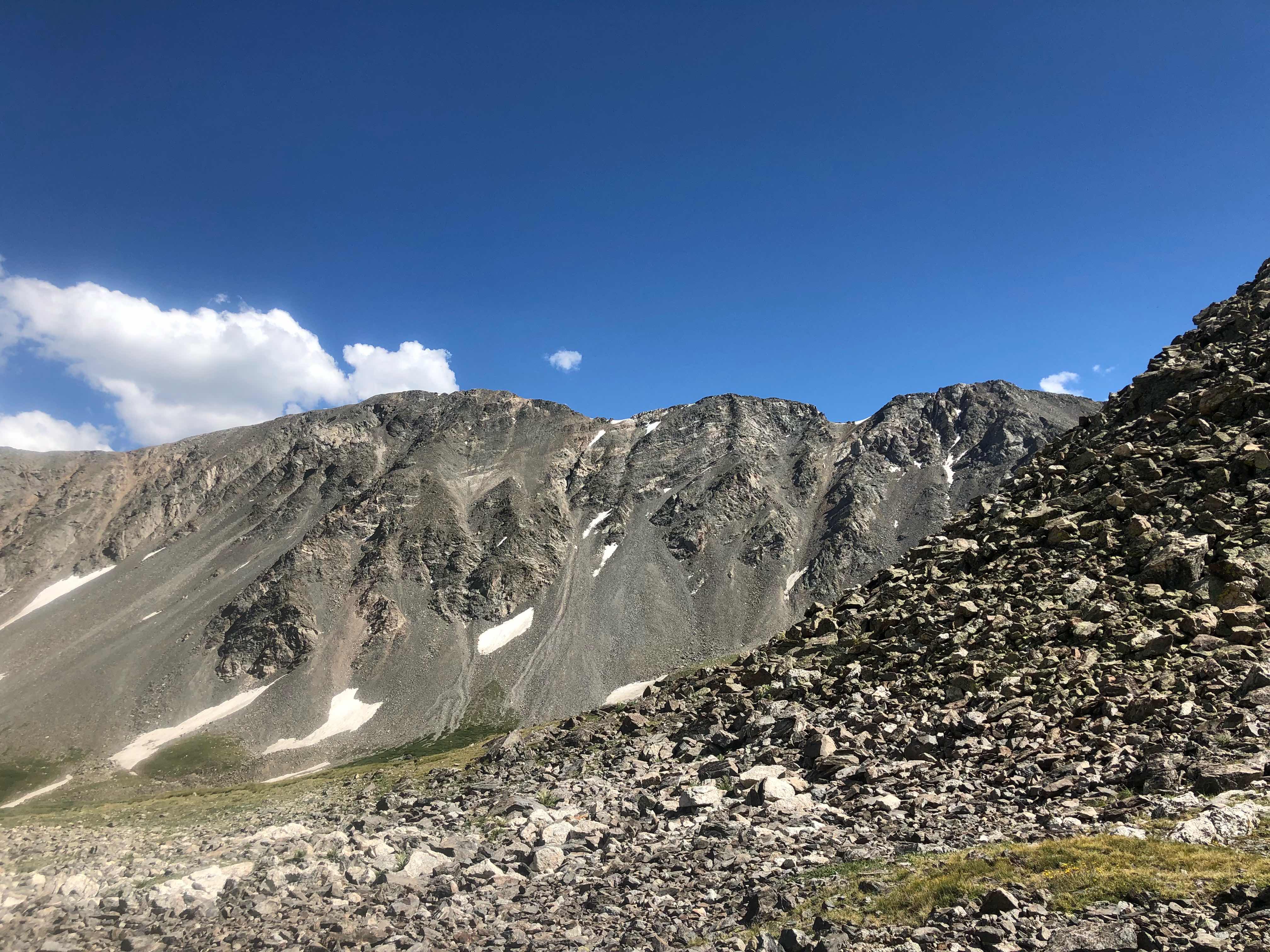 View of what I hiked across as seen from below 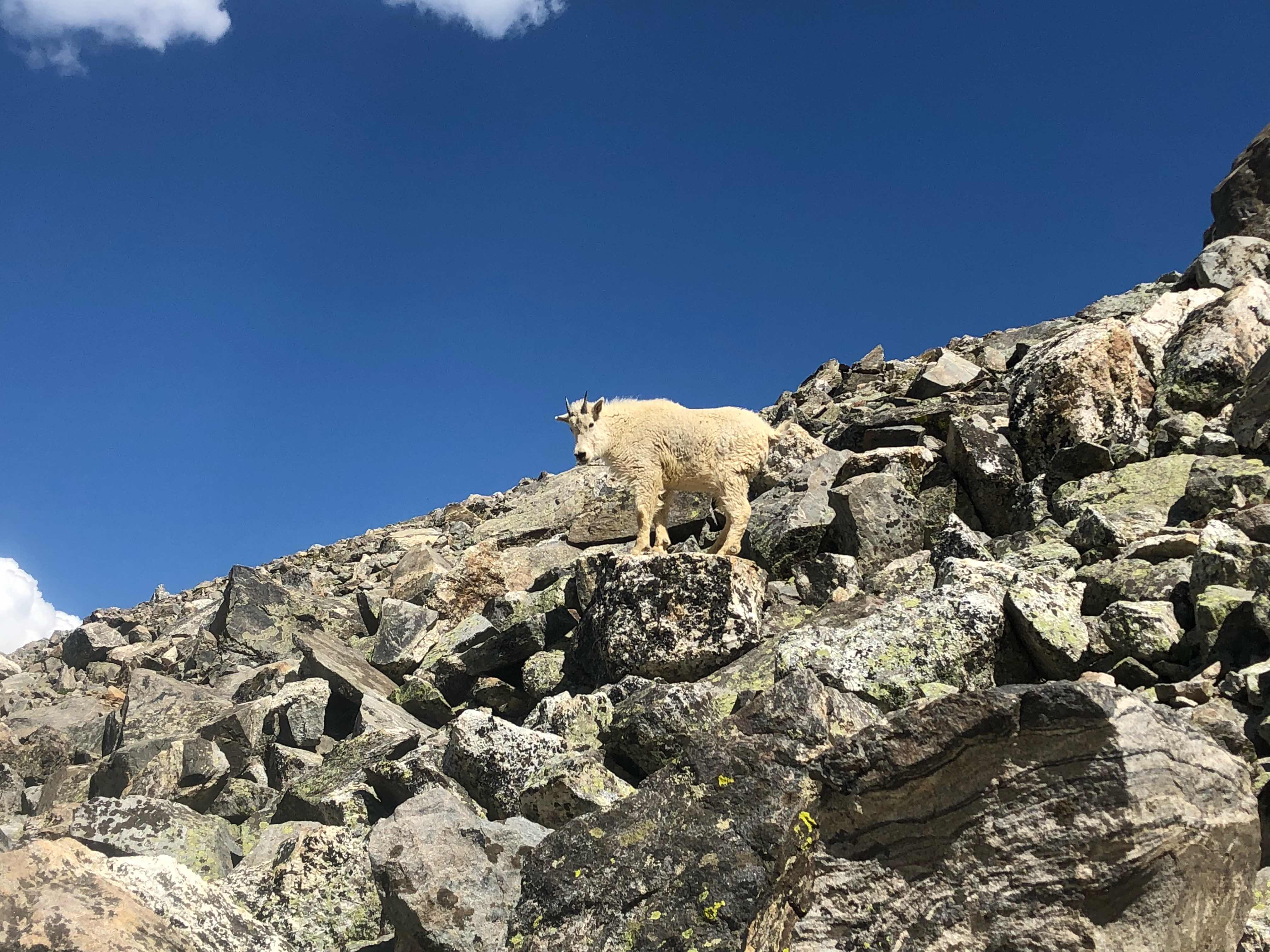 I wish I could move like a mountain goat
The hike down was uneventful. Clouds and Ripple went to climb up and down Torrey’s. When I made it to the trailhead I tried to yogi and ride into town, but did not have much luck. Just as I was starting to hike away Clouds and Ripple showed up. We decided to try and hitch to town together. The trail went alongside I-70 for awhile and we figured it would be an easy hitch. Before we even made it to the interstate a car from the trailhead passed by. The driver had hiked the AT last year and was happy to give us a lift. We ended up in Idaho Springs. We found a motel after a little difficulty. I just did laundry a few days ago so I decided to skip doing it again. I talked with a very nervous father. When I texted my dad earlier to day I was turning around he decided to get onto to google earth and see why. Next thing he knew I hadn’t turned around and was on a very scary looking mountain. He sat glued to the computer watching my progress. My tracker only does hourly reports. I can imagine it was a very tense day of watch my digital footprints. Once mom and dad were reassured of my safety, Cloud, Ripple and I went for dinner. We had a lovely time at a local pizza joint. By the time I got back to the room, showered, washed my socks, and fixed my pack it was after midnight.
Today pushed me way over my limits, but I learned a lot. What had terrified me at the beginning of the rough section seemed common at the end. I definitely got a high dose of walking along exposed areas. As long as I’m going up or staying even I think I can manage the next knifes edge. It is the going down that will always get me.
“A single event can awaken within us a stranger totally unknown to us. To live is to be slowly reborn.”
- Antoine de Saint-Exupery