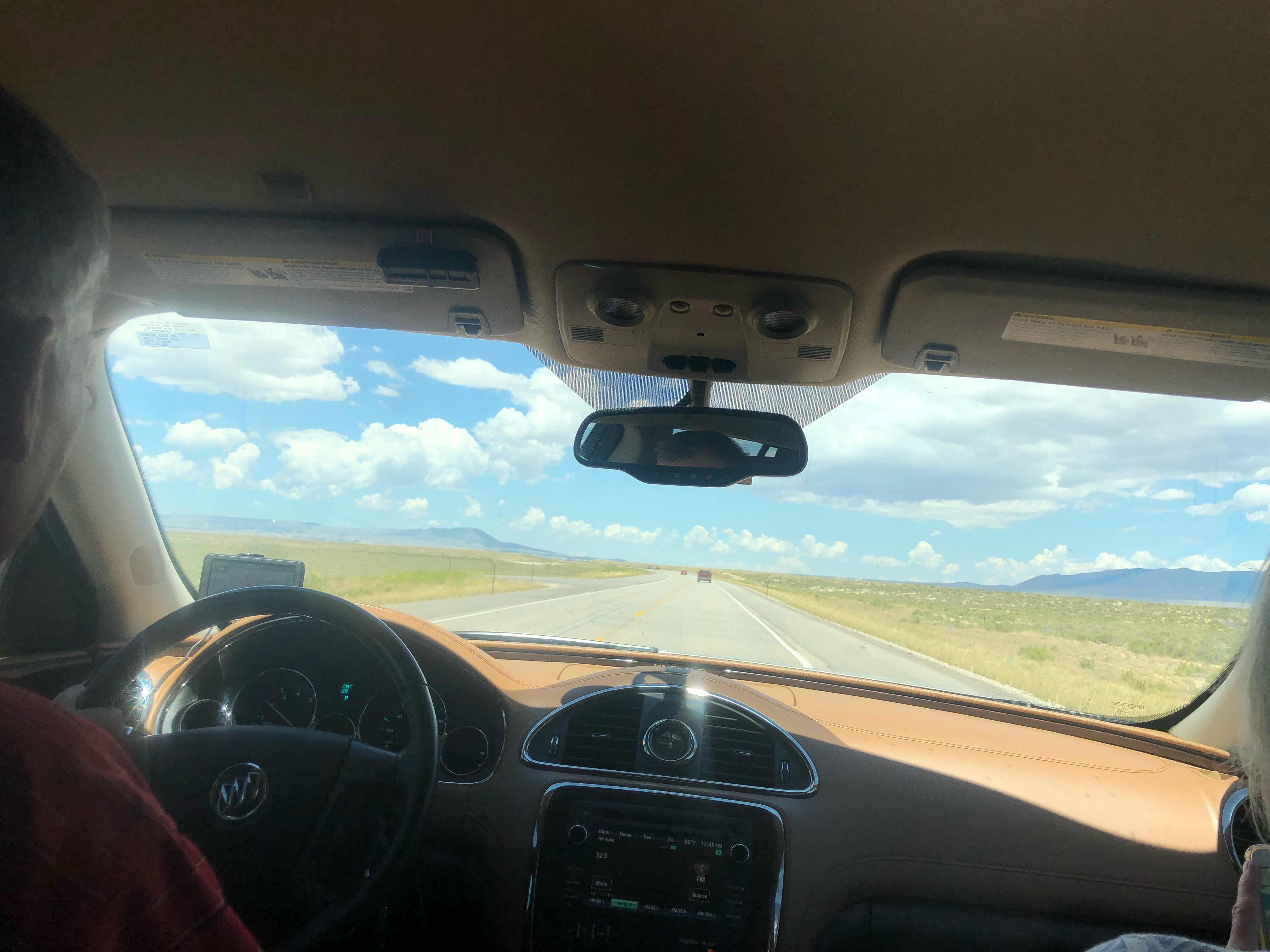 Wyoming at 70 mph
It was a nice treat to sleep in this morning. Hannibal was ninja quiet when he got up and left the room this morning, allowing The General and I to sleep in. He even got my sleeping bag out of the car and back into the sunlight so that it could finish drying. Then he brought me a coffee. It was just the way I like it to, cream and sugar with a splash of coffee. He even talked to the front desk and got us a late check out. We would be able to stay in the room until noon, which would give me some more time to build a few more resupply boxes. We all went down to breakfast together. I had another Belgian waffle with crushed up kit kat bars, whip cream, and syrup. Then I went outside to check on the progress of my sleeping bag. I was pleased to see that it was almost 100% dry. I can’t get over how much more loft it has. I think I might be able to ditch some of my cold weather clothes because the bag will keep me so much warmer than it had previously.
After breakfast we went upstairs to start building boxes. I really don’t like having to plan more than one stretch at a time. The task of deciding how many miles I will hike and how much food I need for a stretch 300 miles away stresses me out. On the positive side I will be saving a lot of money since I have so much food that I bought before I started the trip. As I was building the boxes I realized that I was a little shirt on dinners still. I made a list so that we could stop at Walmart on the way out of town. I was able to resupply myself with twenty four days worth of food. That is almost half of my remaining days on trail. While Hannibal and I worked on the resupply boxes, The General sewed up my torn gaiters and hiking pants. Seeing up my gaiters is never a fun task and she did a much better job than I could have done. Once all of those tasks were complete we had to take everything back down to the car and load it up. My sleeping bag had completely dried and I’m glad that it turned out well.
We made a quick trip to Walmart so I could pick up the extra dinners that I needed and then we hit the road. It was an hour and a half drive to Lander, WY. The drive paralleled the area that Turtle and I hiked last month. I am so glad that we hiked it in June and not July. It was ridiculously hot outside. I feel sorry for all of the thruhikers that are hiking this section now. Good luck with the ninety degree heat, no shade, and long water carries.
Turtle and I briefly went through Lander on our way to pick up the rental car. We only had time to get coffee and Subway before we had to take a bus to Riverton. I was excited to get to spend more time there today. We got checked into the hotel and they even gave Hannibal a cdt hiker rate for the room. The hotel was exactly the kind of place I am use to staying in. It wasn’t exactly the kind of room that The General and Hannibal usually overnight in. I believe their exact words were that it was “rustic”.  After checking in and taking our bags in, we went in search of food. I had heard that the local brewery was very hiker friendly so we went there. Unfortunately, they didn’t open for several hours. The restaurant next door, The Gannett Grill, looked acceptable so that is where we went. Any time we go out to eat we usually end up sitting st the bar and today was no different. Hannibal and The General ordered local beers, while I had a Hendricks gin and ginger ale. We decided to share a 16” pizza. I knew that I would eat more than half of that so I suggested that we order some nachos too. The food, especially the pizza was really good. I had barely enough to eat, Hannibal and The General looked stuffed by the time the last bite was gone. They should know better than to try to keep up with a thruhiker. 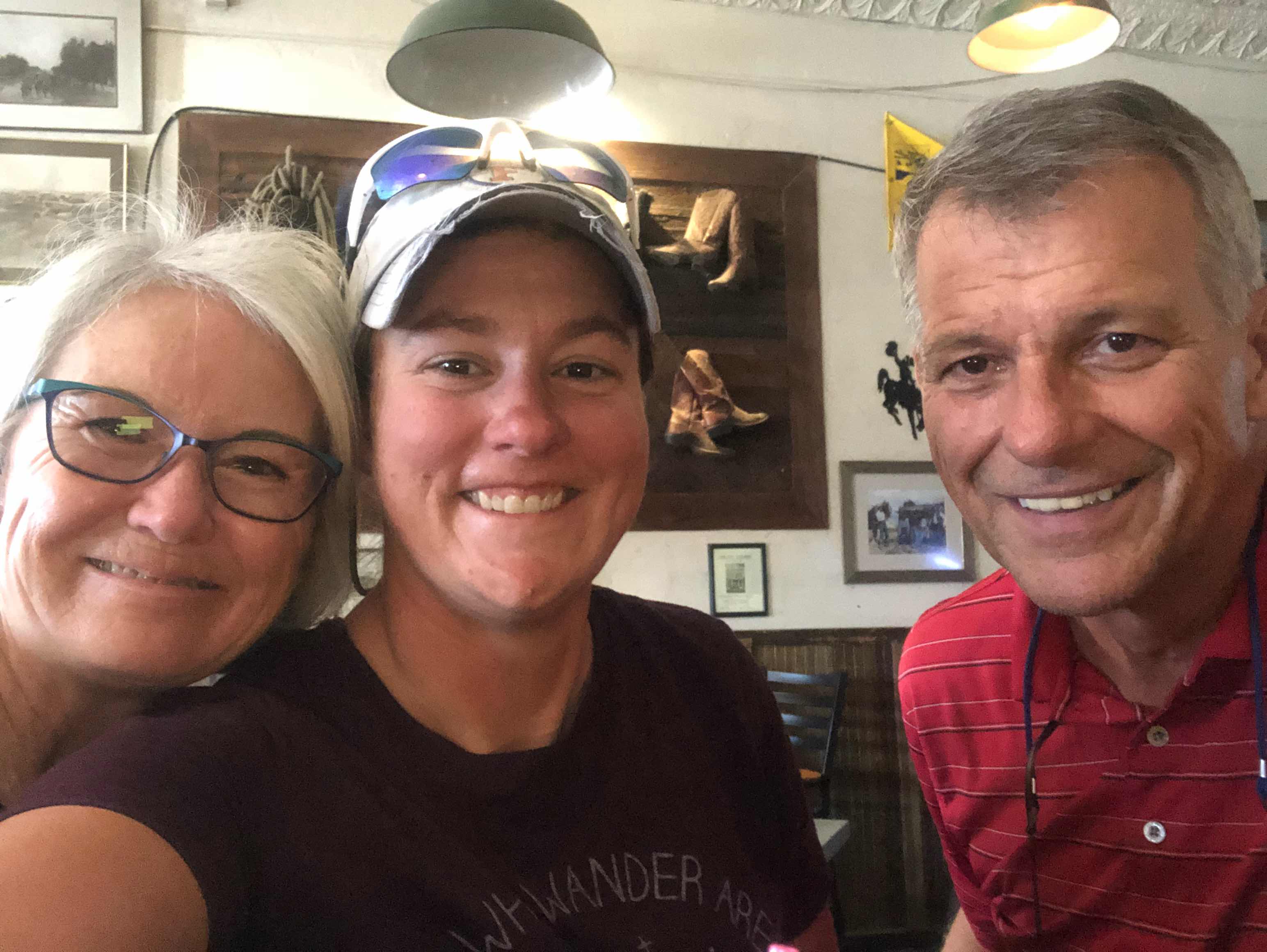 All smiles. This was before their food coma
I am getting ready to begin hiking in grizzly bear country. I needed to pick up a few things to be better prepared for this and since there was an outfitter right next door I suggested that we check it out. Wild Iris Mountain Sports was an awesome shop. I was able to get just what I was looking for. I needed more cordage for my bear bag hanging kit. Yellowstone National Park recommends 30 feet of cordage, my kit only included 26 feet. I decided to go with their recommendation and bought 30 feet. After much internal debate I also bought some bear spray. I don’t really think it will be necessary to carry it, but since I am hiking alone I figured it was better to be safe than sorry. I hope that I never need to use it.
We returned to the hotel room and I still had a ton of little tasks that needed to get done. While I did some research on grizzly bears, Mom and Dad both took a nap. I was jealous, I could have used a nap as well. I still had to figure out how I was going to fit seven days of food into my Opsack food bag. Opsack bags are completely smell proof and are highly recommended for grizzly country. Then I had to figure out how to make that bag fit into my pack. For this next section I am switching back to the pack I used on the AT and PCT, the ULA Circuit. My Zpacks pack can only comfortably carry thirty pounds, the ULA pack can carry thirty five to forty pounds. It will be strange using a different pack at this point in my hike, but I’m hoping that I’ll adjust quickly.
Time was making a fool of me once again. I still had a million things that I wanted to accomplish, but I knew I couldn’t get everything done that I would have liked. I took my tent outside so that it would dry out, it was still wet from yesterday. Once it was dry I got all of the dirt out from the inside. I had collected a fair amount. I wanted to update my Instagram account with a few new posts, but I just didn’t have time. I took a shower, soaked my feet in an epsom salt bath(which was awesome), reglued the gash on my knee, ate some brownies(my mom makes the best brownies), and updated my blog. My parents brought my laptop so that I could upload all of the pictures I have taken on this trail, but I didn’t get that done either. By the time I got to sleep it was after 11:30. Even though I didn’t get everything done that I wanted to, I still felt like it was a productive day. 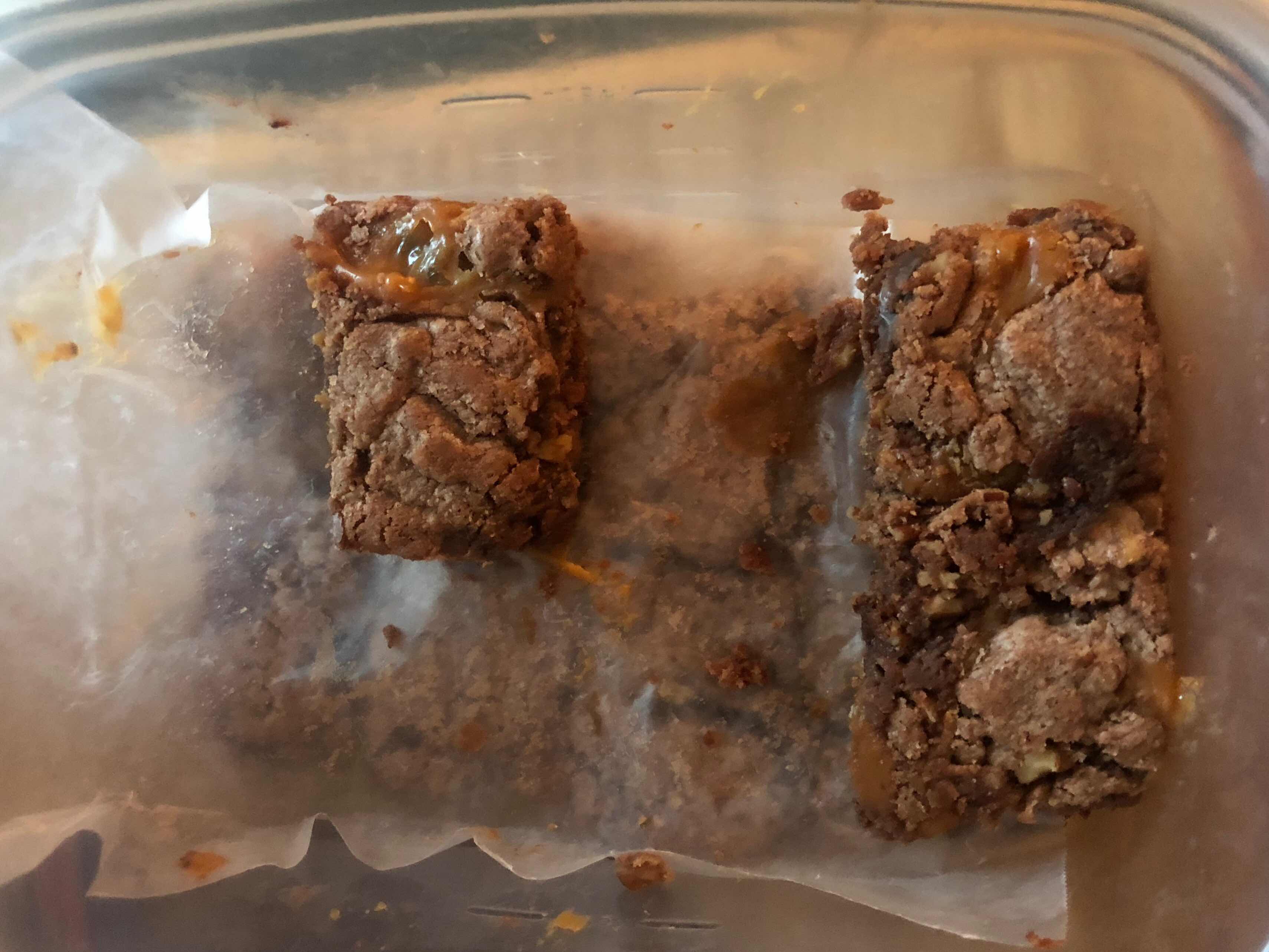 Turtle brownies that The General made me 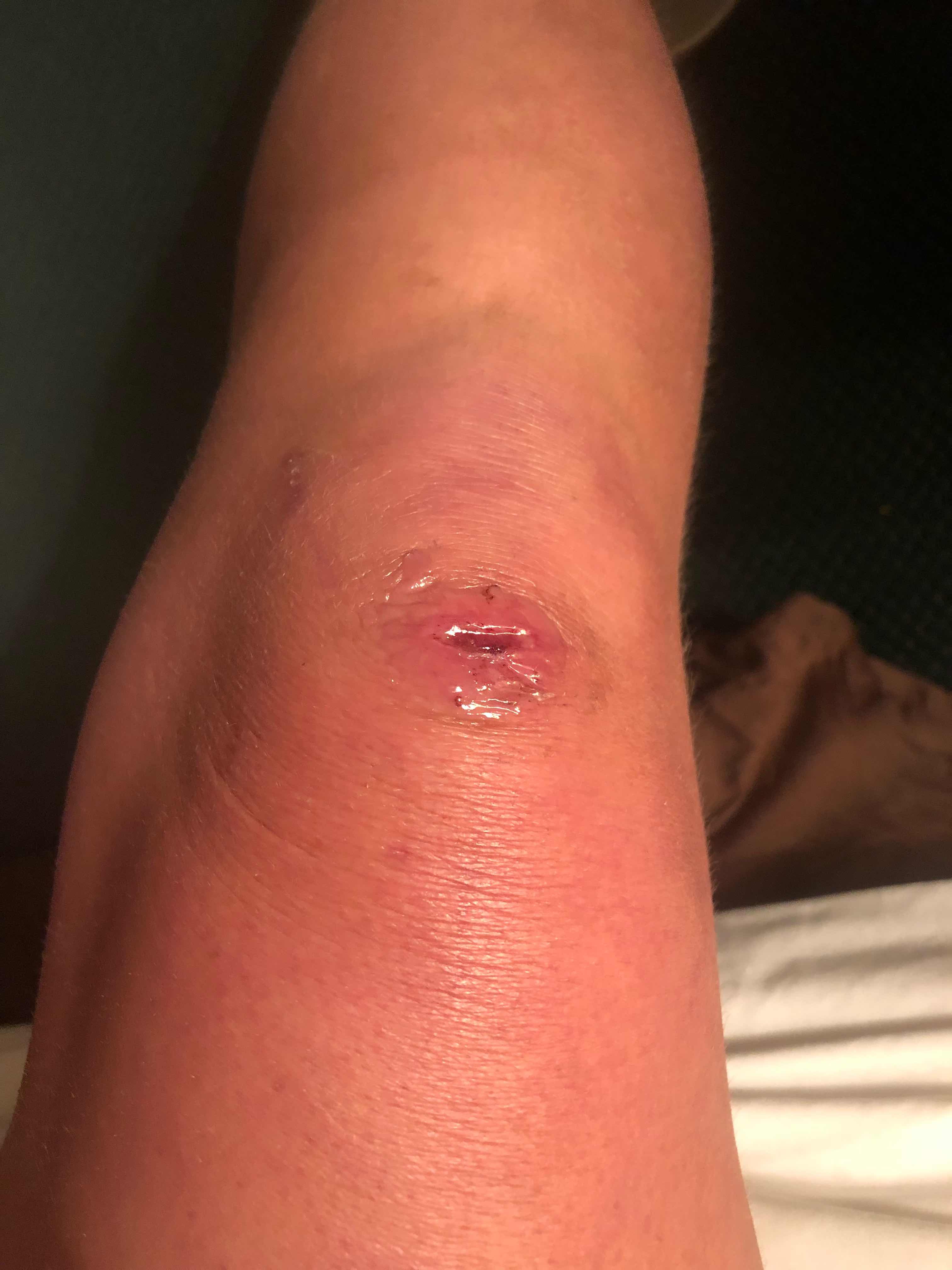 Still healing
“When everything goes to hell, the people who stand by you without flinching — they are your family. ”
– Jim Butcher