Day 87- Monsoon Season is Upon Me

It was a weird day. I just felt off from the minute I got up. I was up late catching up on my blog posts. I slept through the night for the first time in a long time. I even slept in because I thought today’s miles would go by quickly. As I was packing up I managed to lose the stuff sack for my tent. I thought I had it in my pocket, but when I went to grab it, it was gone. I figured the wind must have caught it and blew it away. I spent over fifteen minutes looking for it without success. I started out cowboy camping last night, but lightning in the distance made me nervous enough to setup my tent. It never did rain where I was at. I kind of wish that it had so that it wouldn’t have been a waste of time and energy setting up my tent in the dark. I didn’t start hiking until after seven o’clock. 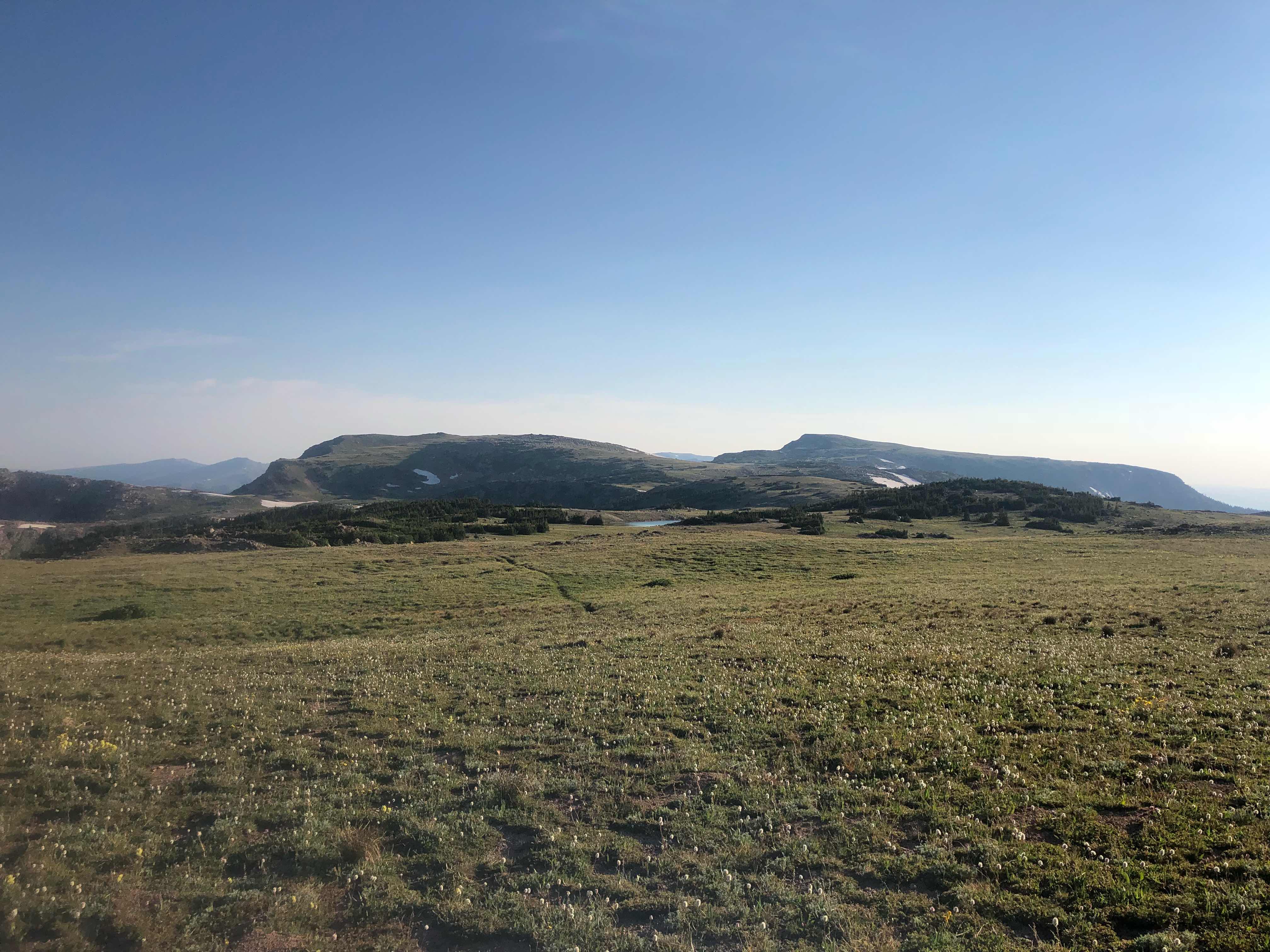 Trying to find an olive green stuff sack in this terrain was like searching for a needle in a haystack
I started the day off with a couple short uphills. Going uphill has been much easier on my sore knee, but today everything seemed to hurt. After the short climbs I began to drop in elevation. A fair portion of the day was spent hiking just above eight thousand feet. I really wish I had spent more time at a higher elevation. It was ridiculously hot out again and there was little to no cloud cover during the morning. I was almost great full when the afternoon storms rolled in around two thirty. The increase in cloud cover and wind made the heat much more manageable. 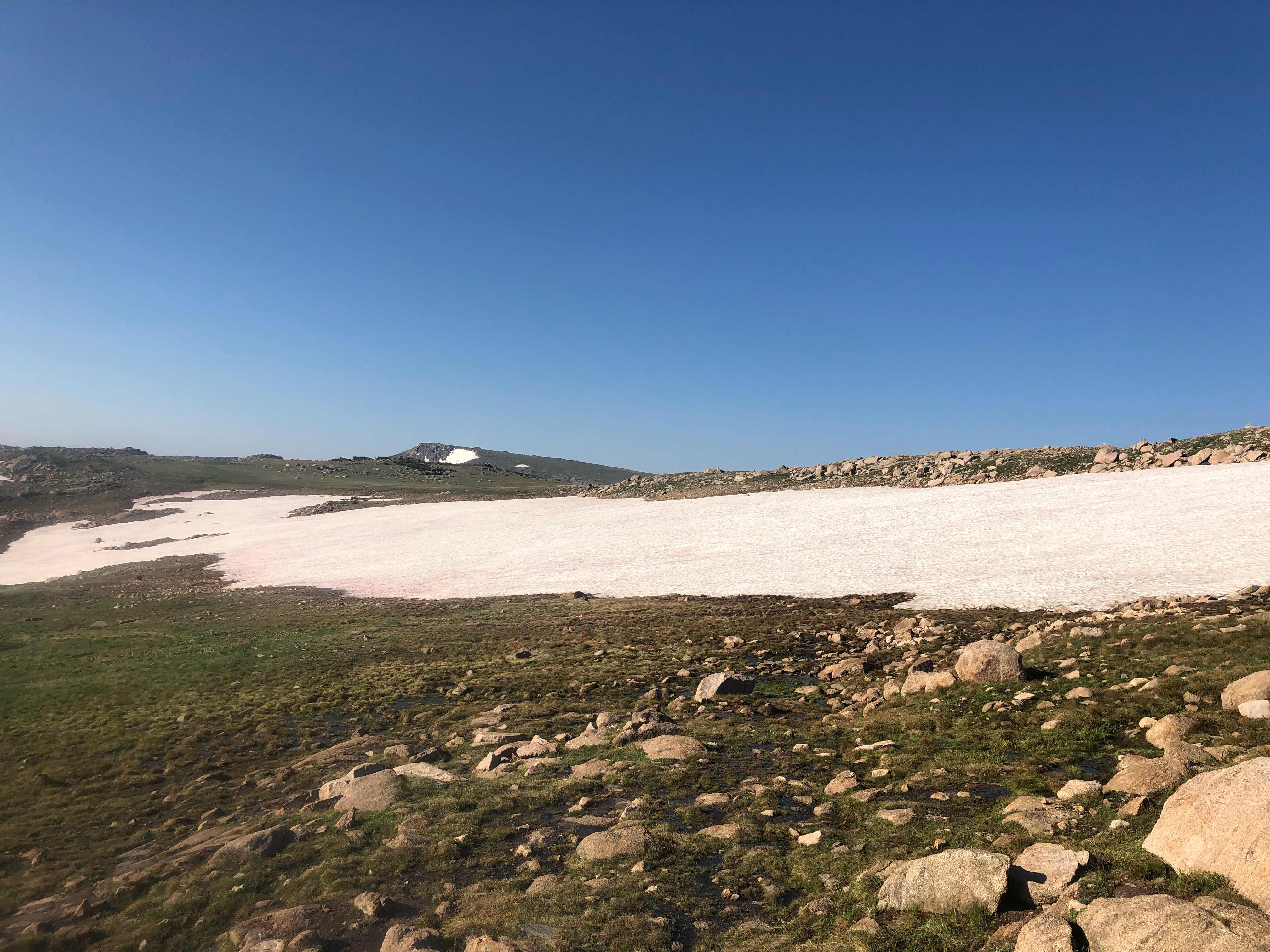 Largest snowfield I’ve had to cross in hundreds of miles
Before dropping in elevation this morning I hiked past several pristine lakes and meadows. I must have gone past more than 6 lakes. The meadows were very marshy and it was difficult to keep my shoes dry. Eventually I lost the battle and my feet were absolutely soaked. In fact for most of the day my feet were wet. I passed through a lot of marshy areas, muddy spots, and then it rained. Every time my shoes would dry out one of the above mentioned things would get them wet again. It was a bummer because it was clean sock day. 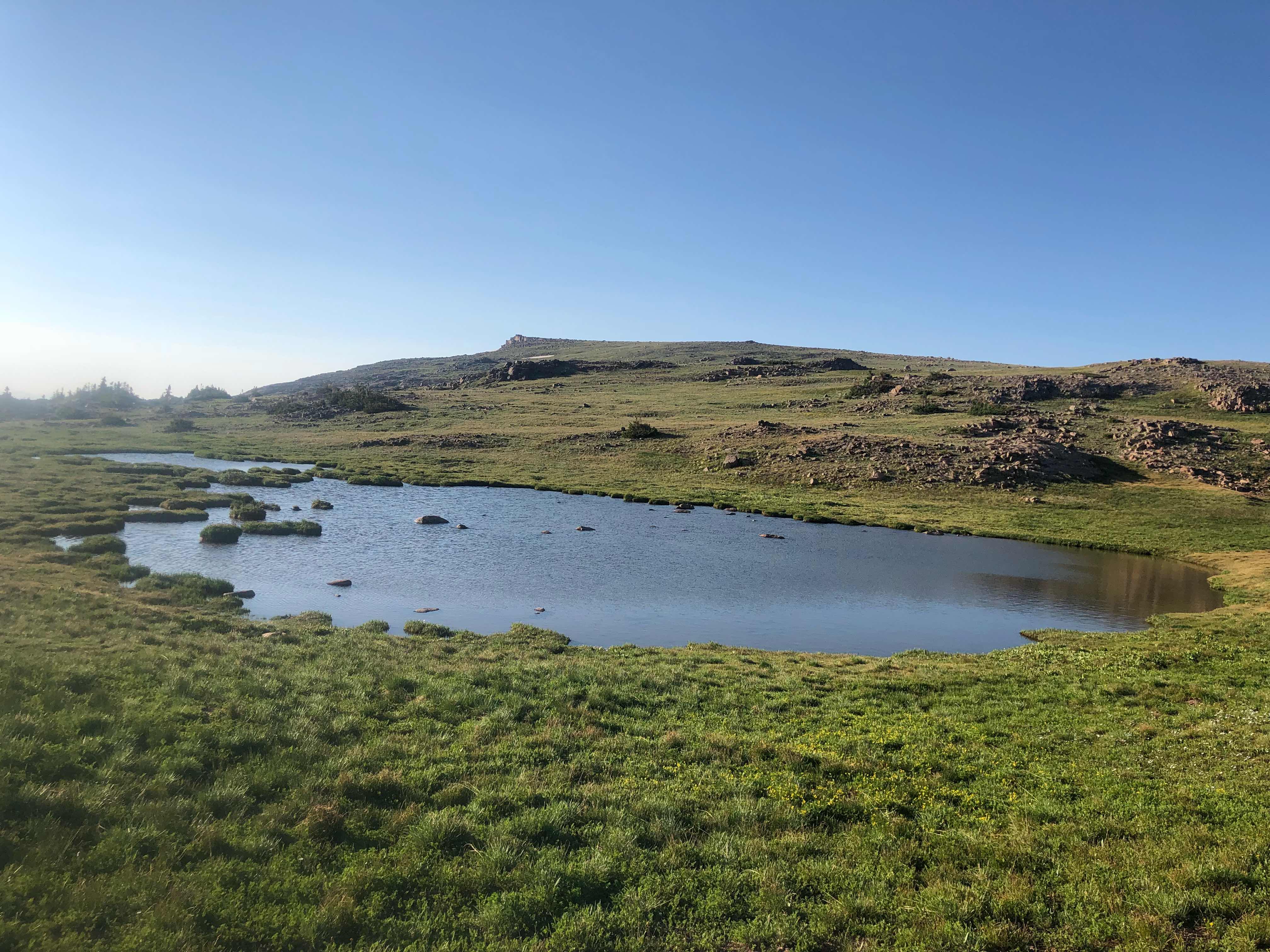 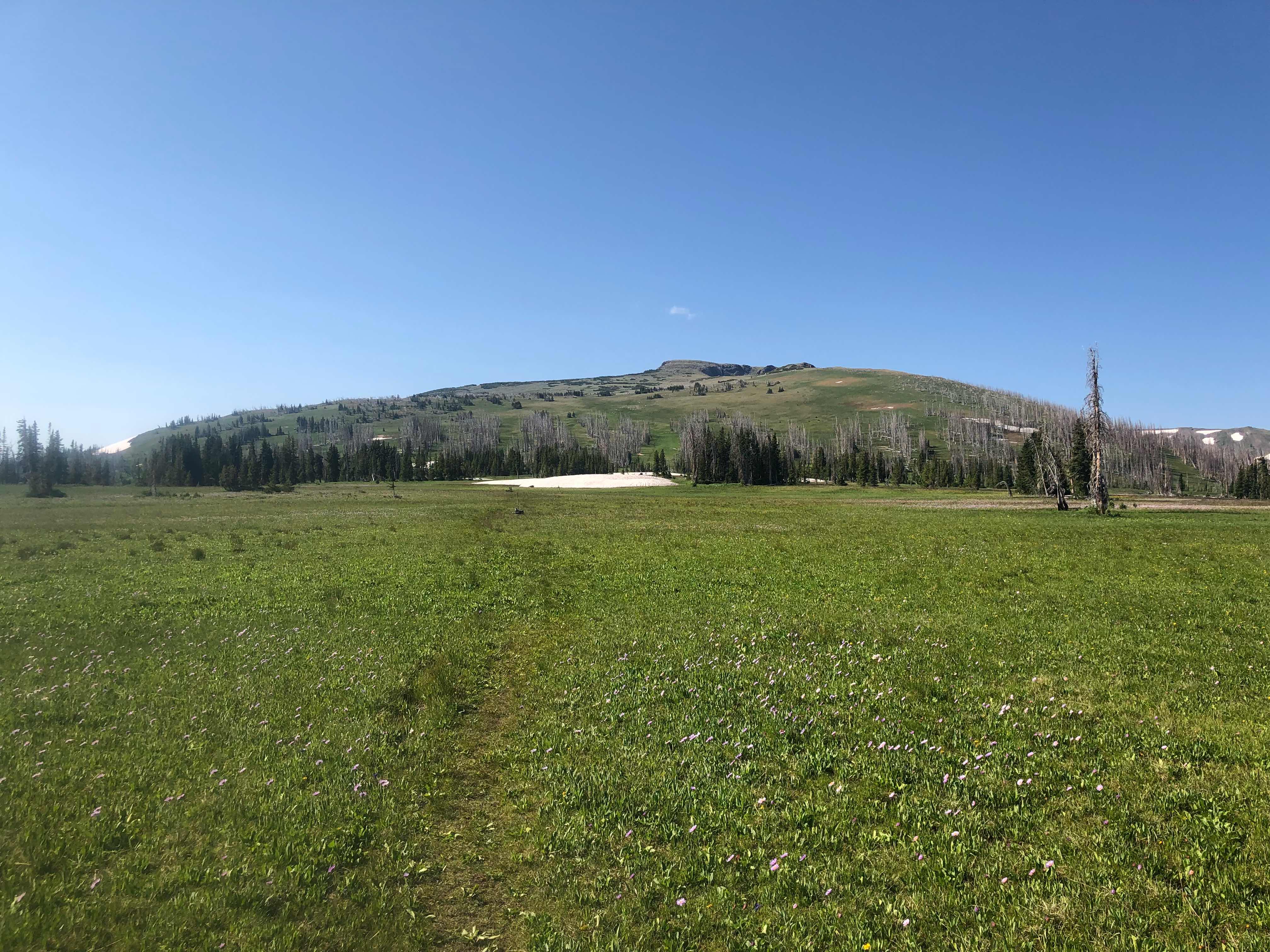 Marshy meadow
When I dropped down from 12,000 feet to 8,000 it was like someone had turned on a furnace. Within a three mile stretch I stopped, processed, and drank two liters of water. Usually a liter lasts me 5-10 miles depending on elevation change. At least I stayed well hydrated. Another positive thing was that during the hottest part of the day I bounced in and out of the trees. I was happy to get some shade for awhile. 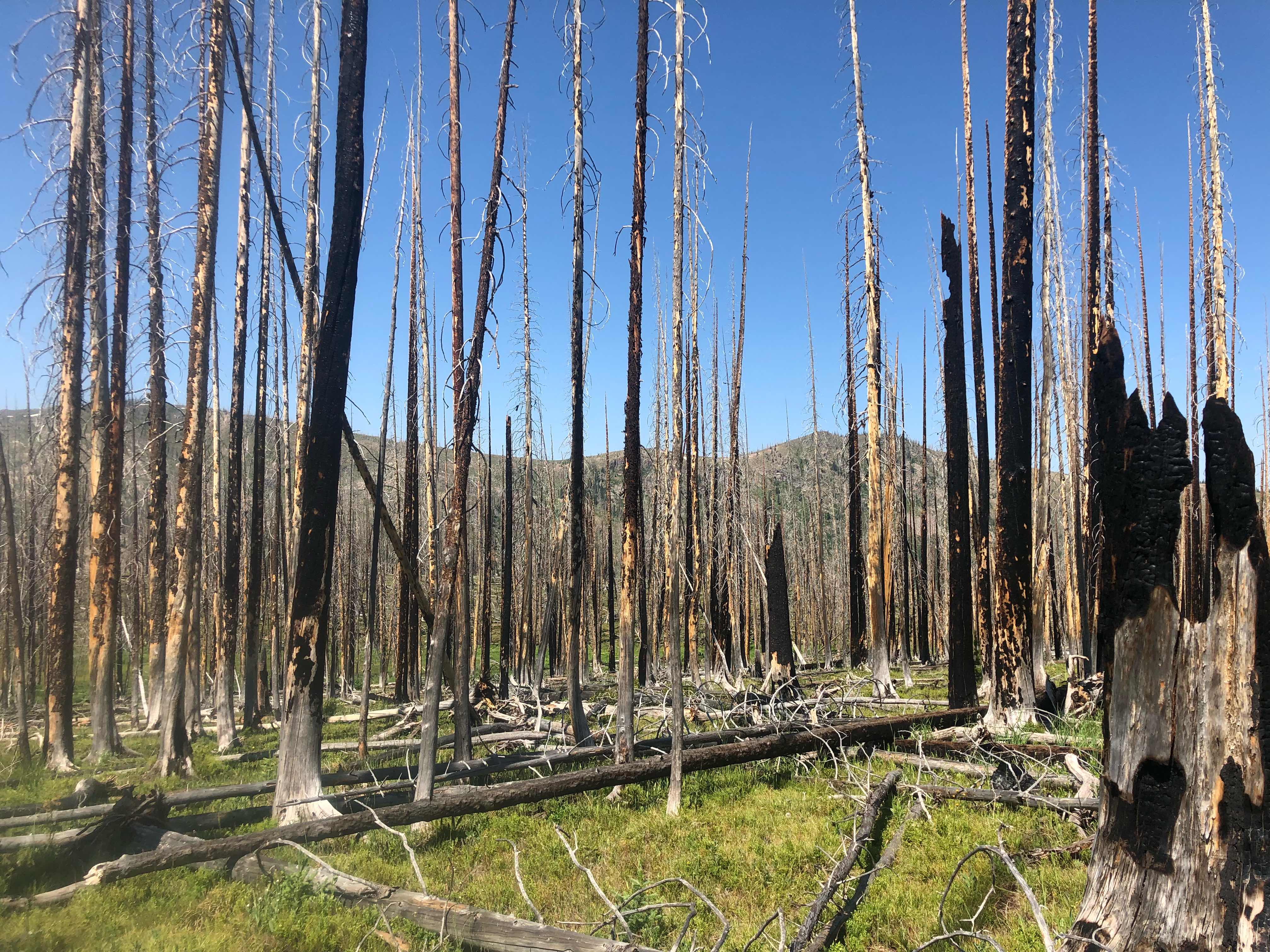 No shade here
I didn’t see any other thruhikers today. I had passed Qetzel and Hurculeas tent around nine o’clock this morning. I expected them to catch up to me at some point, but they never did. I wondered if they took an alternate and got ahead of me at some point without me seeing them. I did see a lot of day hikers and overnight backpackers. This area is really convenient to Steamboat Springs. I talked to two nice ladies from Steamboat. They had a few days off and decided to escape the heat by car camping and hiking. We talked for about ten minutes before I had to get going. The sky was beginning to rumble and the sky was rapidly looking ominous. Before I hiked away they gave me a granola bar. Yay for food that I didn’t have to carry! 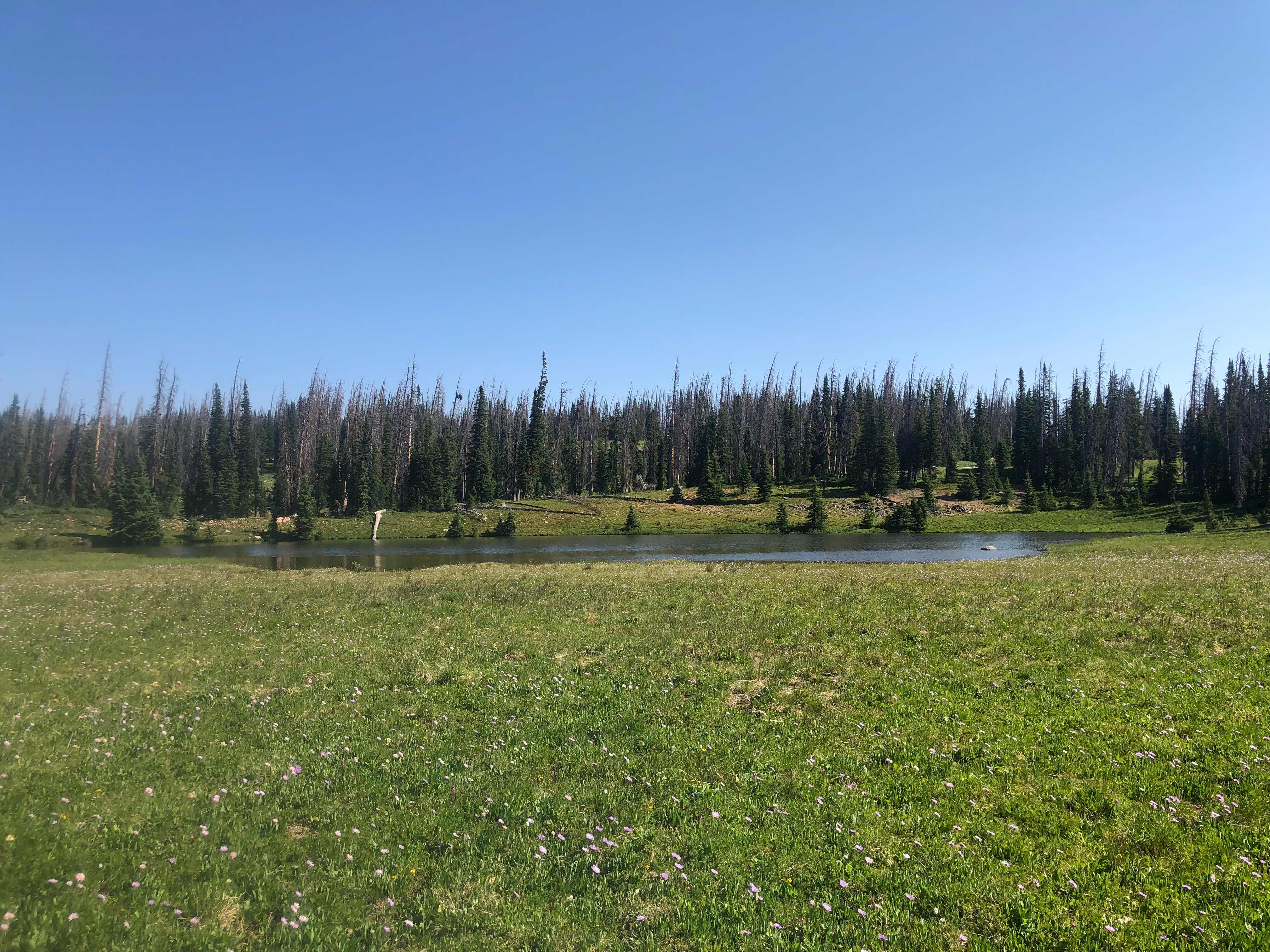 Another lake
At first it looked as if I was going to be able to out run the storm. I stayed ahead of it for close to an hour. When I stopped to grab another liter of water it finally caught up to me. I was able to hide under a bridge to stay out of the worst of it. Some of the hail that was coming down was the size of a marble. I sat under the bridge for more than thirty minutes. Eventually I had to get moving, I still had about nine miles left to hike and it was approaching four o’clock. By the time I started hiking again it was just barely drizzling. I probably could have gotten by without my rain jacket, but I was chilled from just sitting under a bridge. 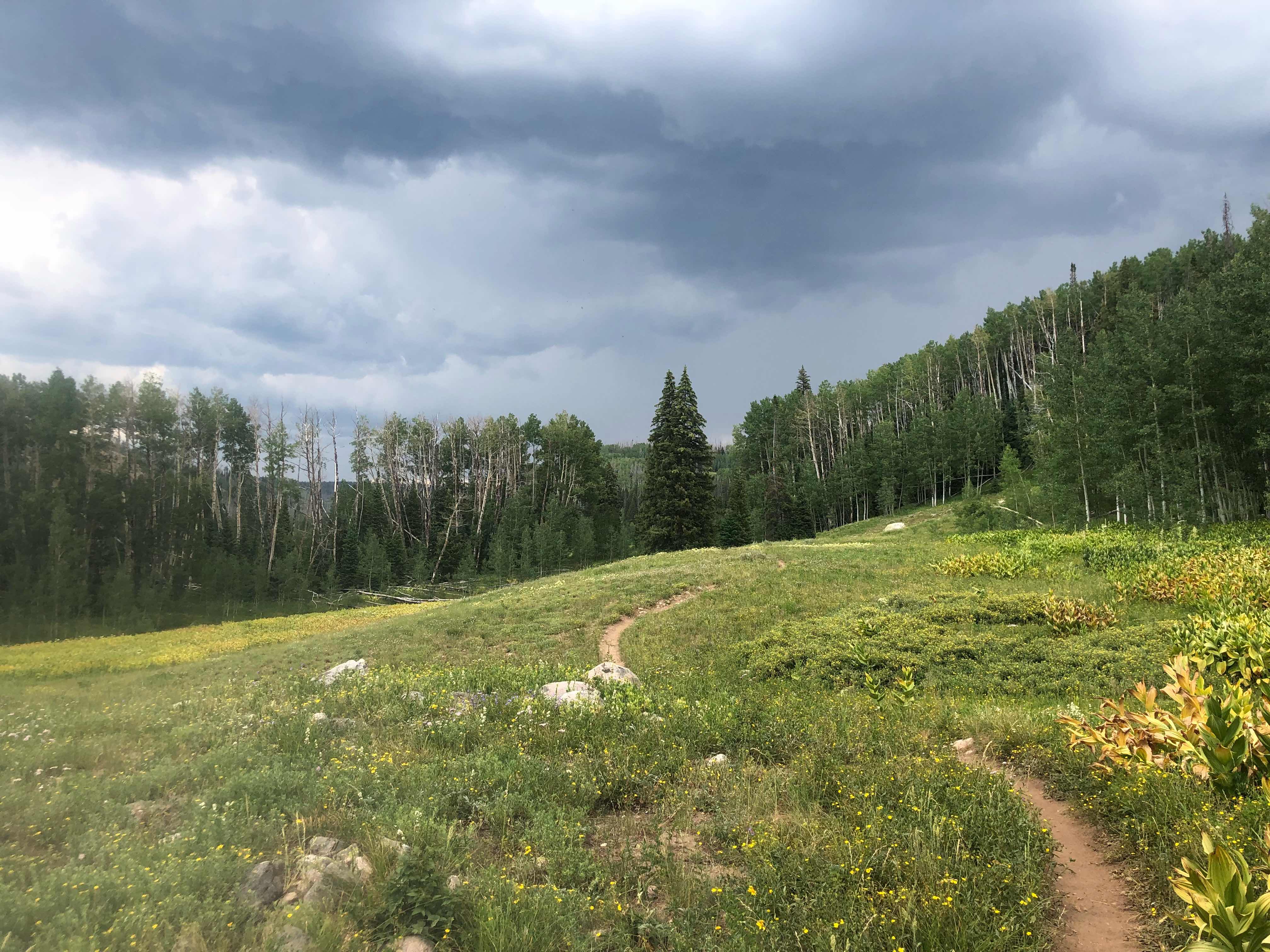 Ominous clouds
I came upon a section of trail that had a sign up declaring that a bridge was out along the trail. The sign suggested hiking a forest service road. Since the road paralleled the trail and I wouldn’t miss any views I decided to stay on the road. It was a little bit longer than the trail, but it seemed like a smart decision. Shortly before the road and trail connected I came across a flooded area on the road. I couldn’t make it across without getting my feet wet so I took off my socks and shoes. If I would have known about this spot I would have just stuck to the trail. I lost even more time having to dry my feet and put my socks and shoes on. 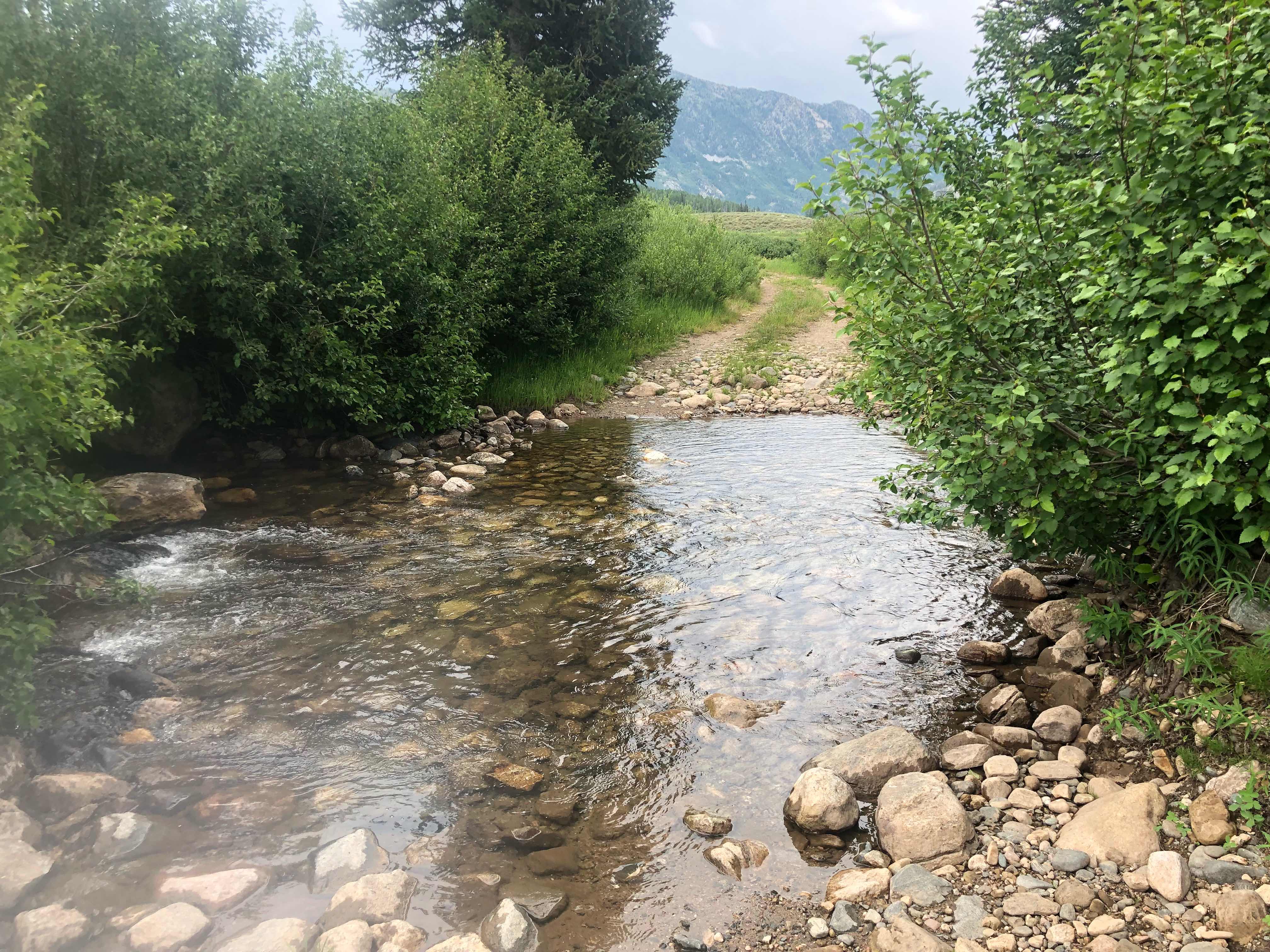 Flooded road
More storms were starting to build up around me and my knee was killing me. I thought about stopping and setting up camp early, but I really needed to make another five miles. I had plenty of daylight remaining so I kept hiking. Eventually I found some really great looking camp spots, but once again it was too early to stop and I needed more miles. By the time it was late enough to stop and I had hiked my miles, I couldn’t find a suitable spot. I had to keep hiking until almost dark. The spot I stopped at was less than ideal, but it was better than nothing. When I got my tent out and unrolled it I found my stuff sack. I have absolutely no idea how I ended up rolling it up with my tent without noticing or remembering that I had done it. I could really have used those fifteen minutes that I searched for it this morning. 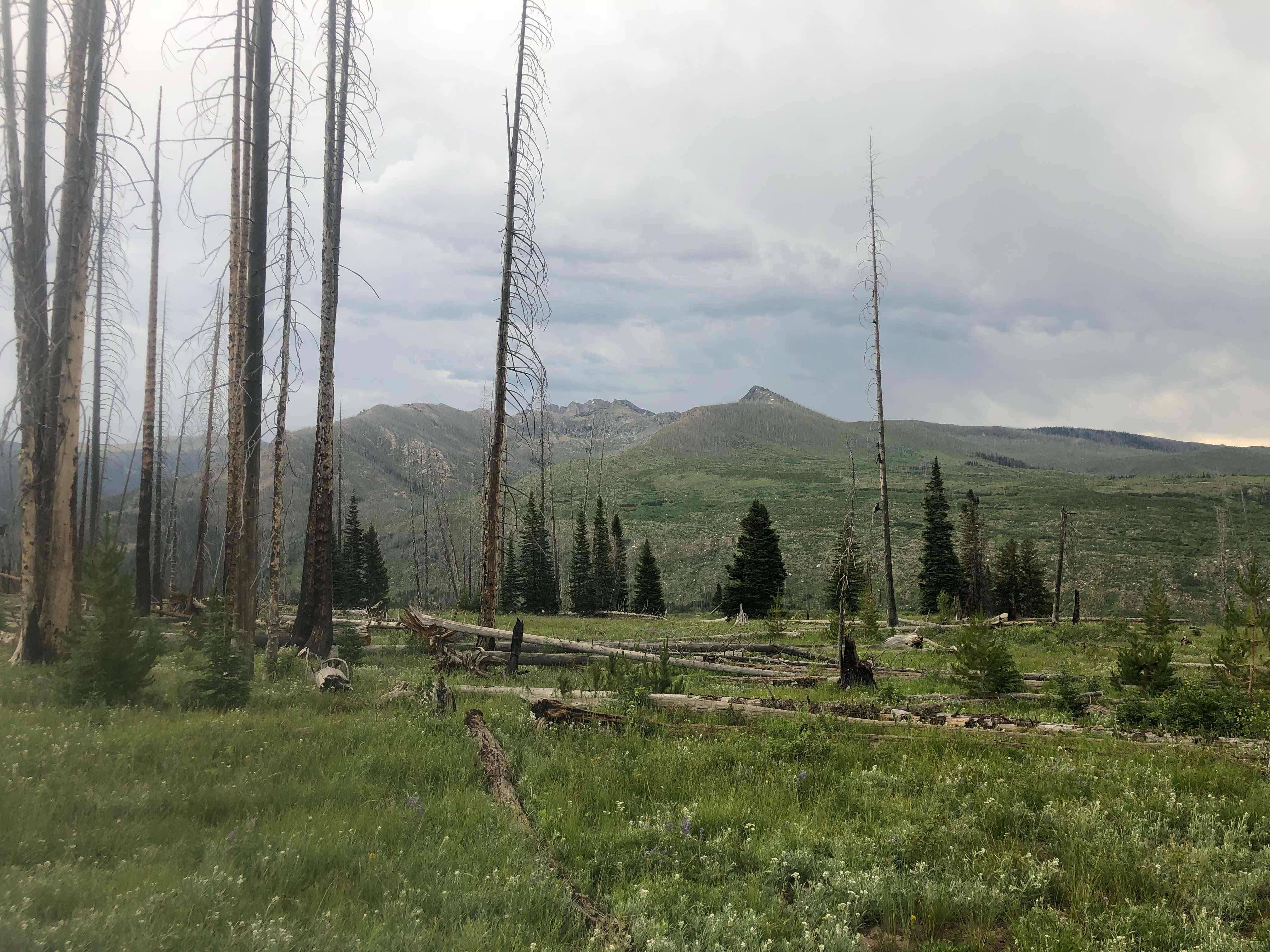 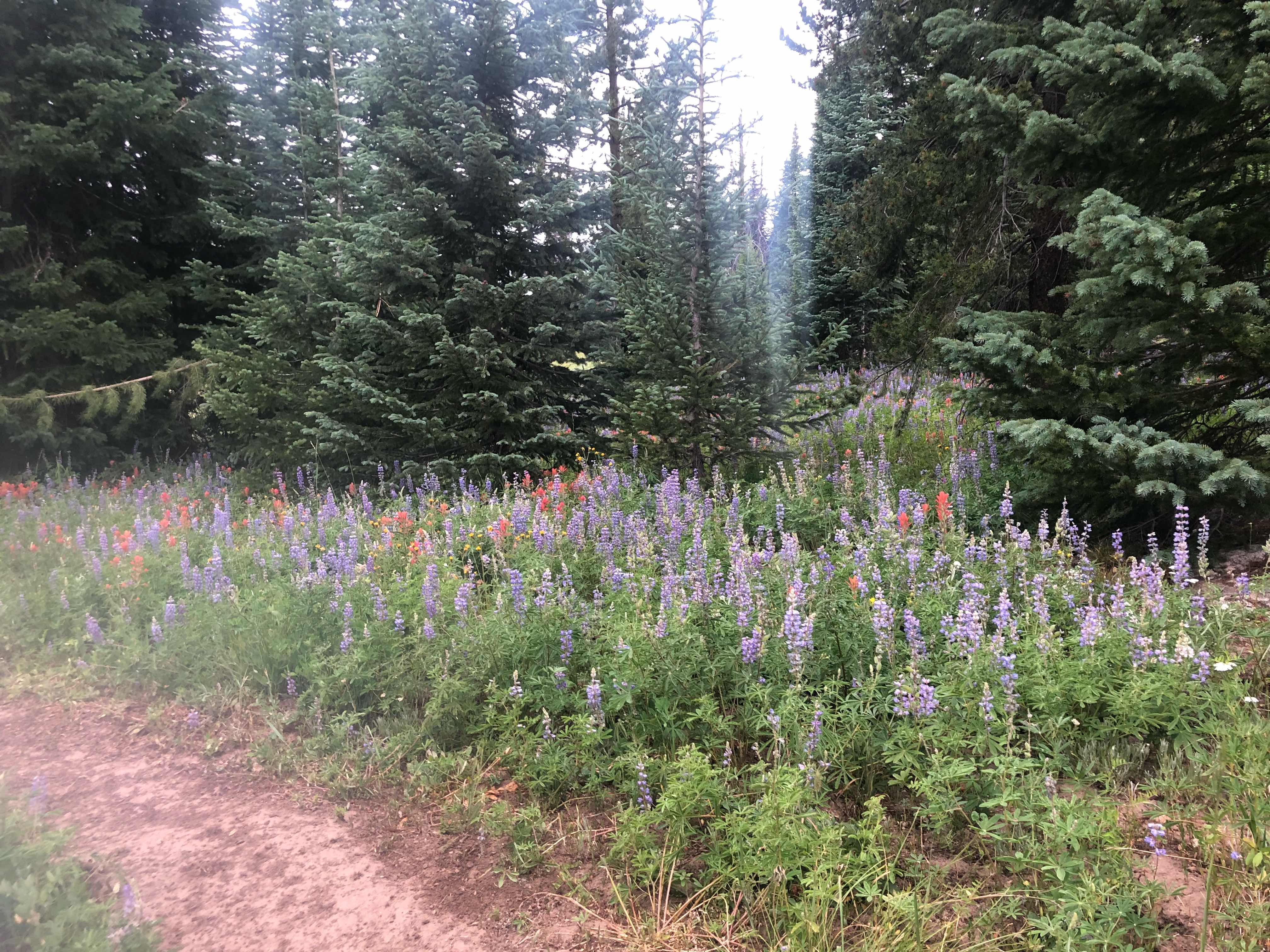 Tons of flowers today
“All his life he looked away...to the future, to the horizon. Never his mind on where he was. Hmm?  What he was doing.”
- Yoda