I didn’t sleep very well last night. I’m not sure what was going on. I had a lot to eat for dinner, I was well hydrated, and I was very warm inside of my tent. I should have slept great. Around 9:30 I could hear fireworks going off. That surprised me because of all of the fire restrictions in Colorado. It made me wish that I had hiked up to the reservoir to camp. The Fourth of July is my favorite holiday. It just didn’t seem the same without fireworks. I overslept this morning. I usually like to be up by 5:30 at the latest, but I didn’t get up until 5:50. I guess I just needed a little extra sleep. I started the day off by climbing another 13,000 foot mountain. The climb was almost 4,000 feet spread over 4.8 miles. It was broken into two parts. The first part was below tree line through a very rocky forest. It went by quickly. Once I broke tree line the trail was pretty flat and went through an alpine meadow. It was a beautiful trail and the sun was shining. I really was enjoying the day. 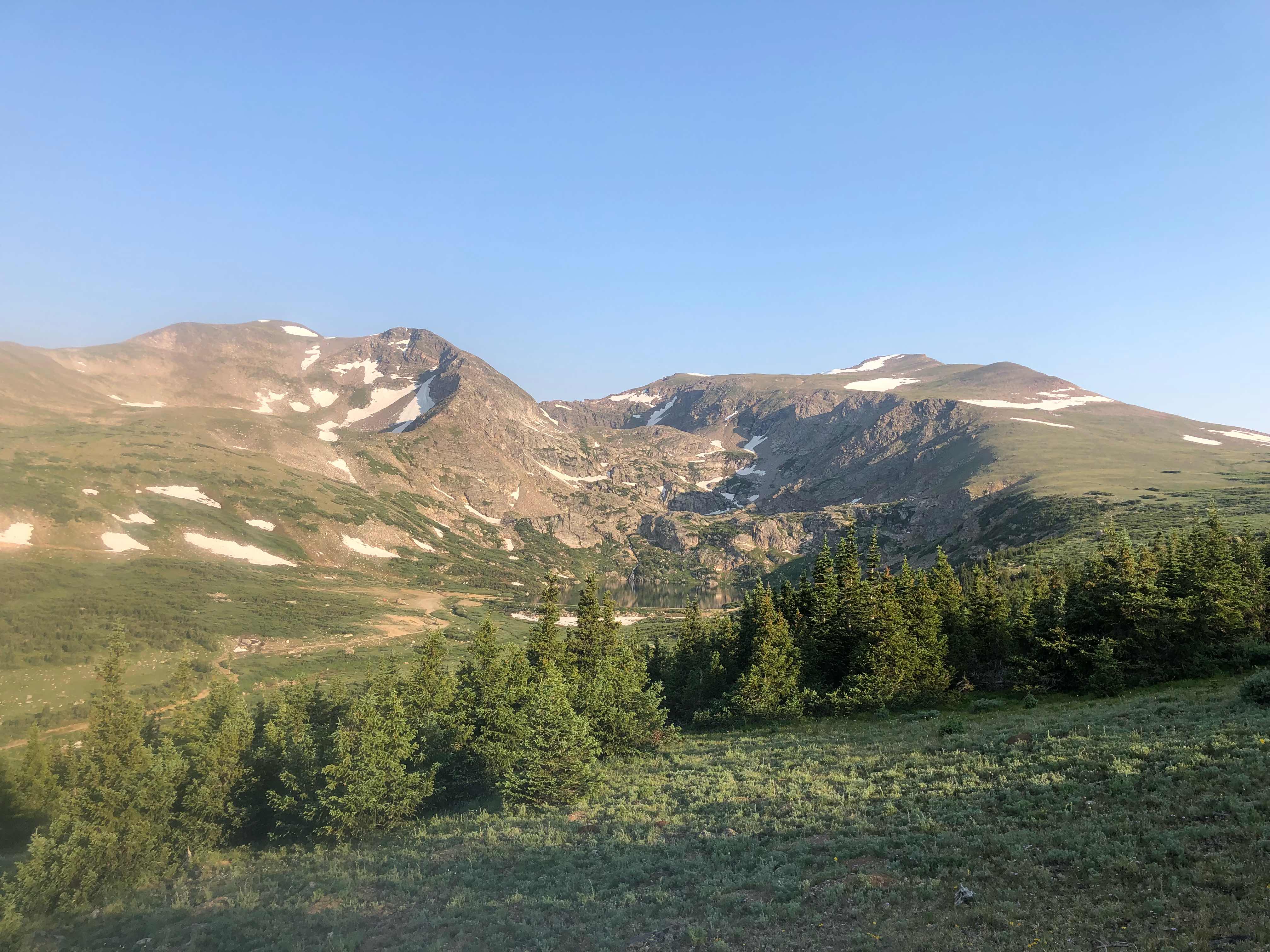 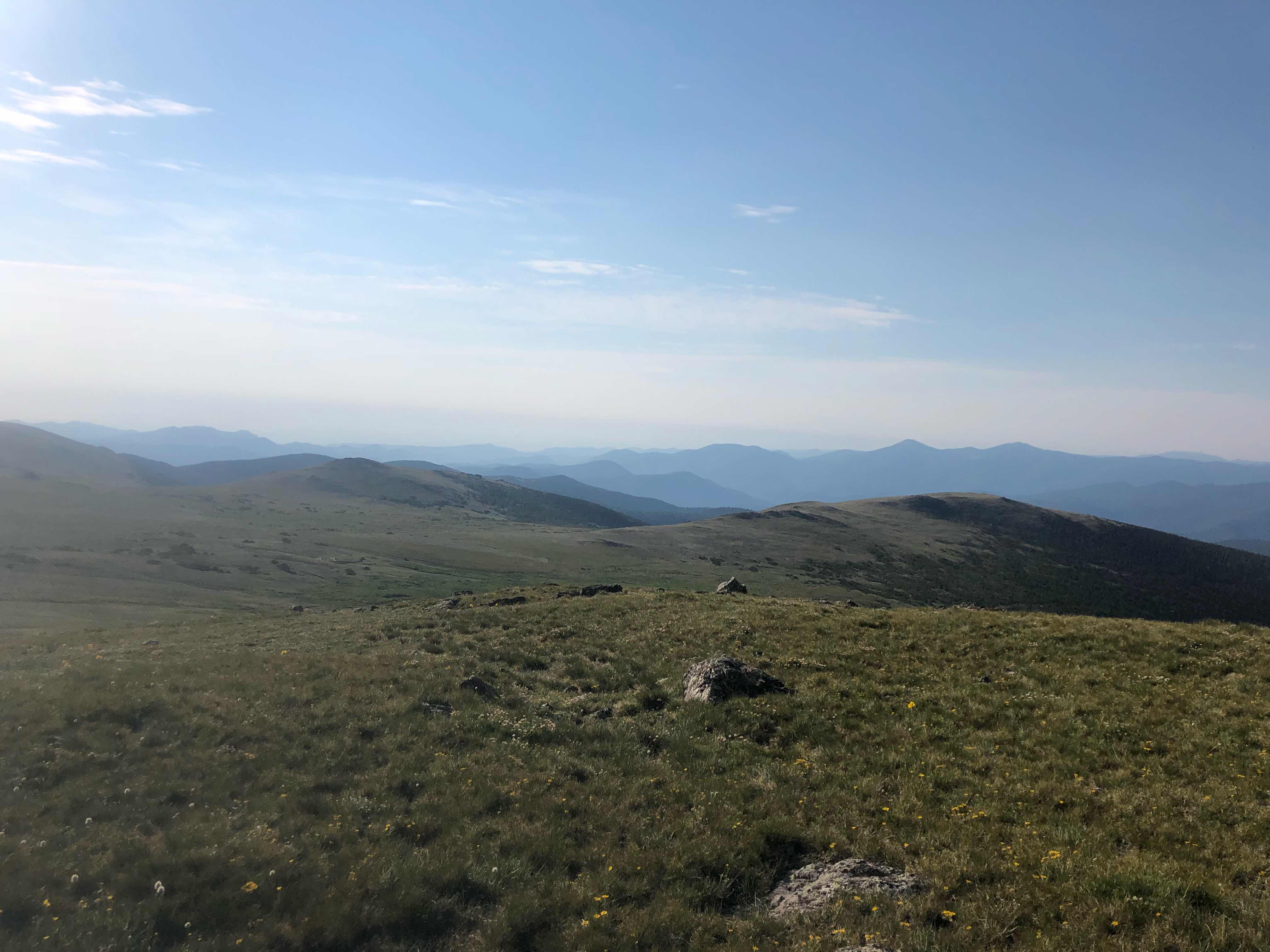 Alpine meadow
The second part of the climb was very steep and went through a lot of talus. I was determined to keep my pace up throughout the whole climb. I was mainly successful, but at a certain point it is just hard to keep your speed up. I feel like I have fully adjusted to the altitude, but hiking at 13,000 feet is just tough. I made it to the summit in just under three hours. I was happy enough with that. It was really windy and cold at the top. I hid inside a wind break that was built out of rocks. Ripple and Clouds joined me there. We had second breakfast and caught our breath before heading down the mountain. They are both really quick on the downhill so I let them go ahead of me. I’m slow enough going downhill, but through in tons of loose rocks and scree and I am excruciatingly slow. 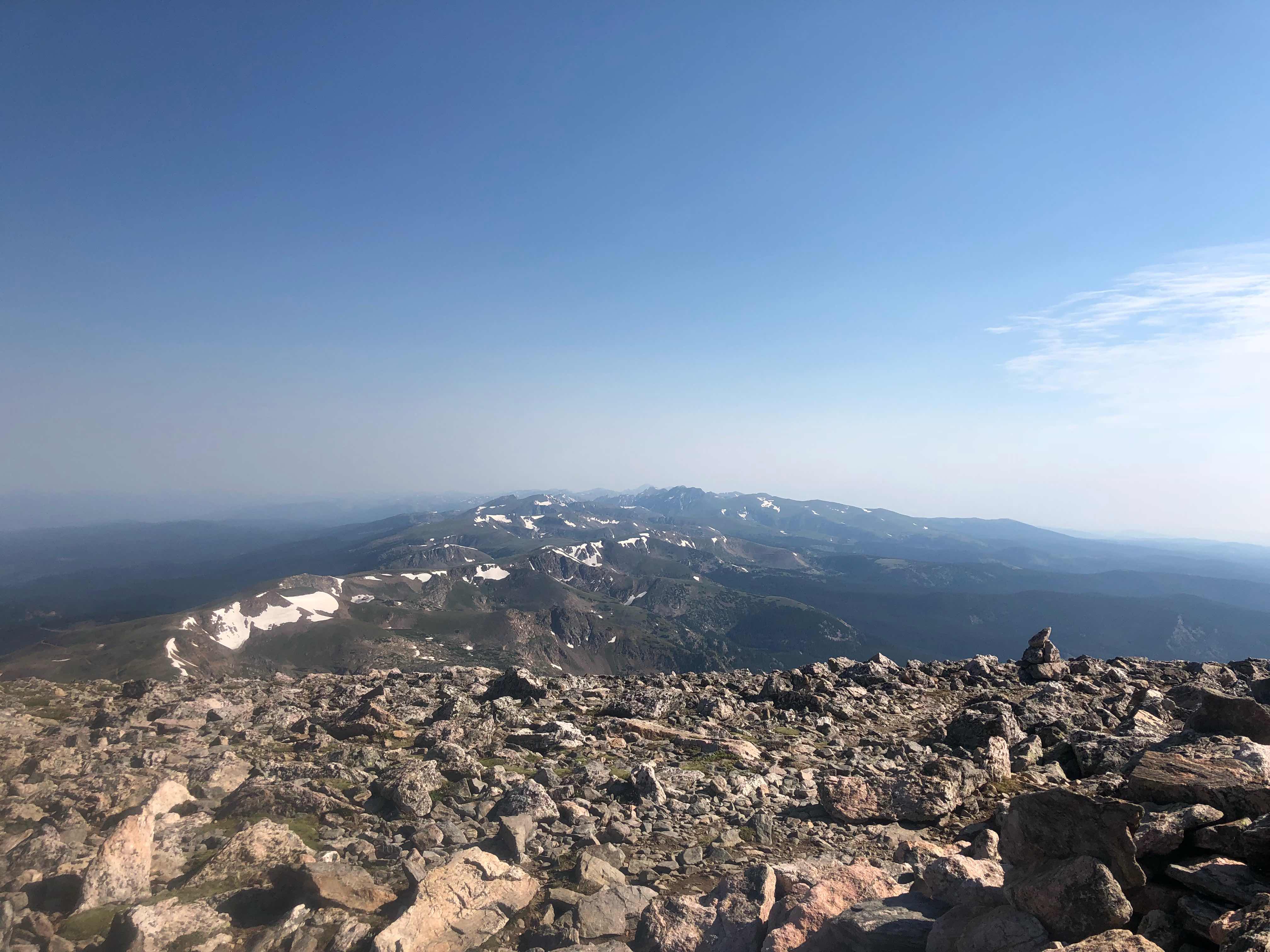 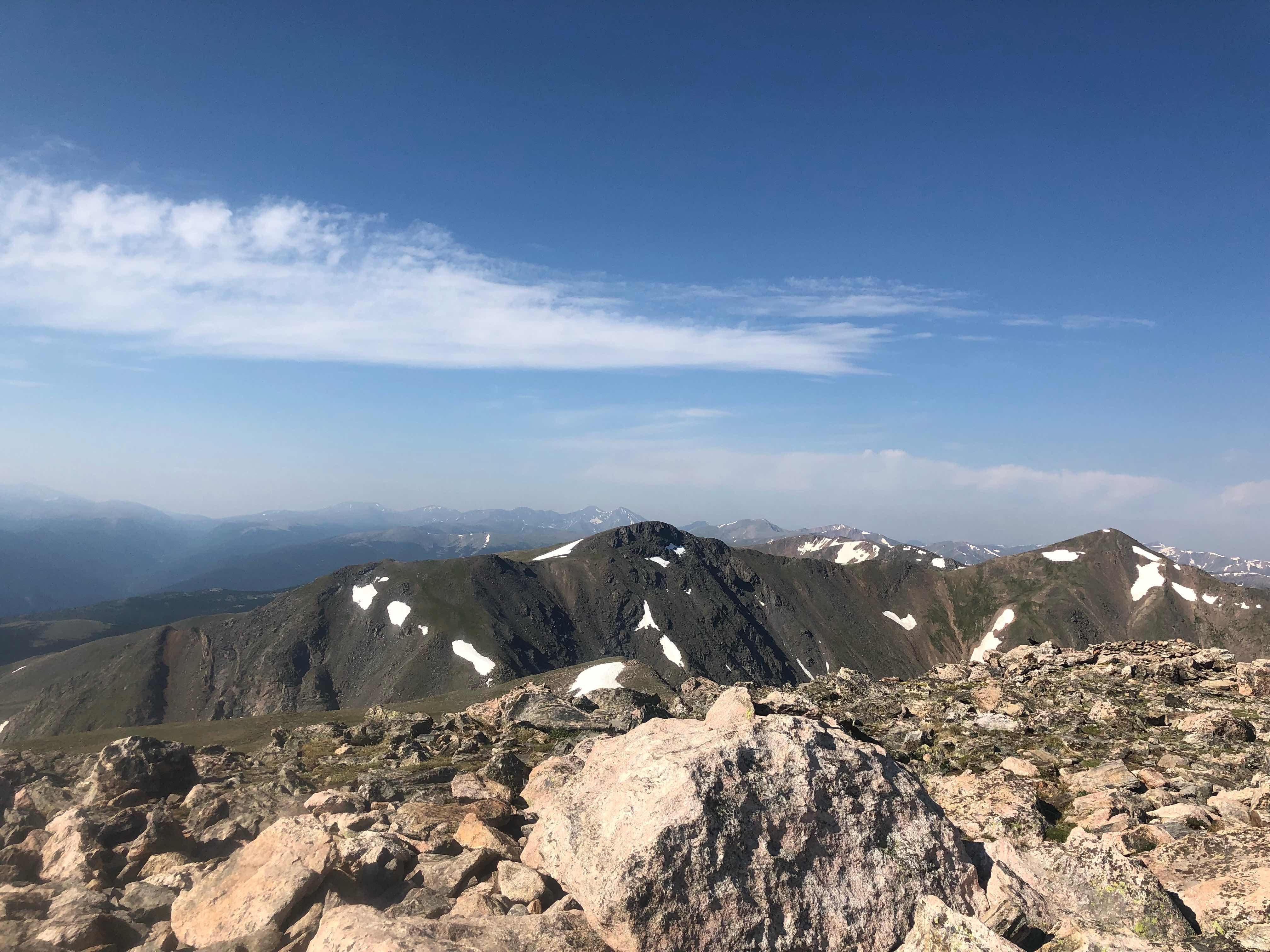 Looking back at where I’ve been 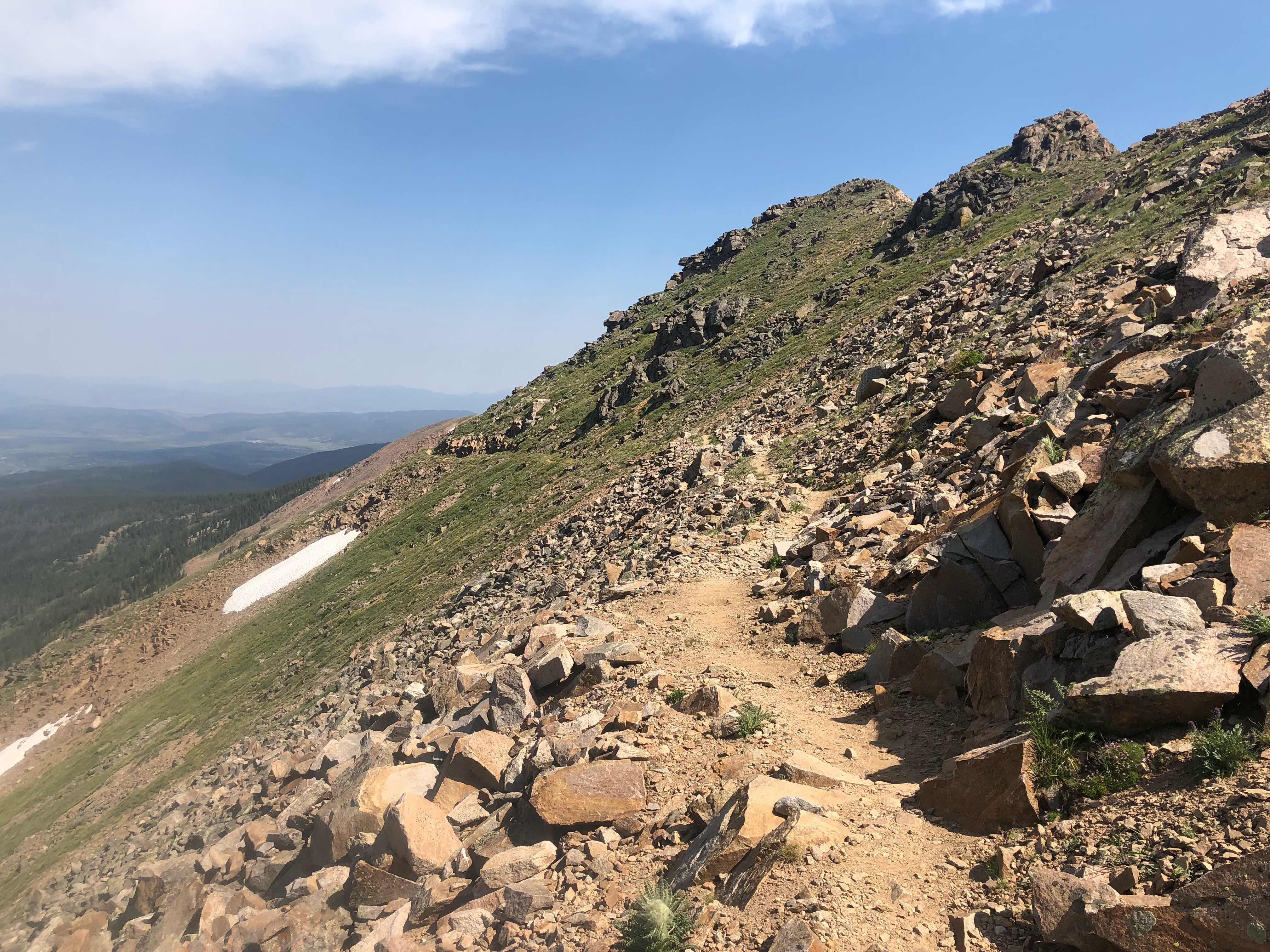 Easy part of the trail on the way down
I managed to keep my feet under me on the way down. I tried to work on my footing and speed. I’m still having to baby my left knee, so I couldn’t go as fast as I would have liked, but the important thing was getting down without falling which I managed. I ended up taking an alternate route after coming down from the summit. The alternate included a small road walk and was one mile longer than the actual trail. I chose this route because weather was starting to roll in and I didn’t want to walk another exposed ridge line in high winds. Clouds and Ripple stuck to the cdt. Even though my route was longer I was able to keep up a faster pace than them. This was the first time since leaving Breckenridge that I’ve had some easy, fast hiking. I was glad that I took the alternate when the lightning and thunder began. It couldn’t have been much fun walking the ridge. 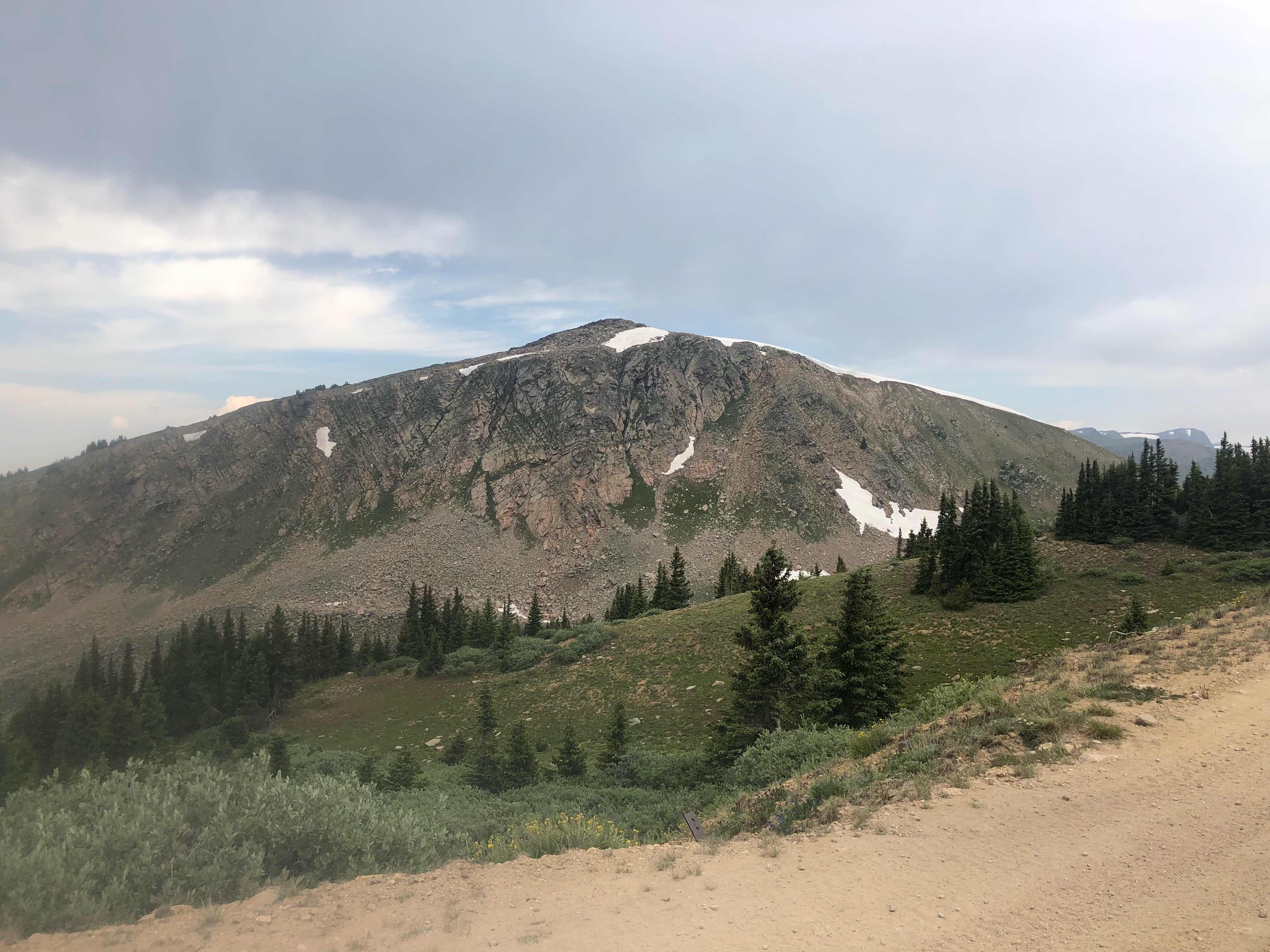 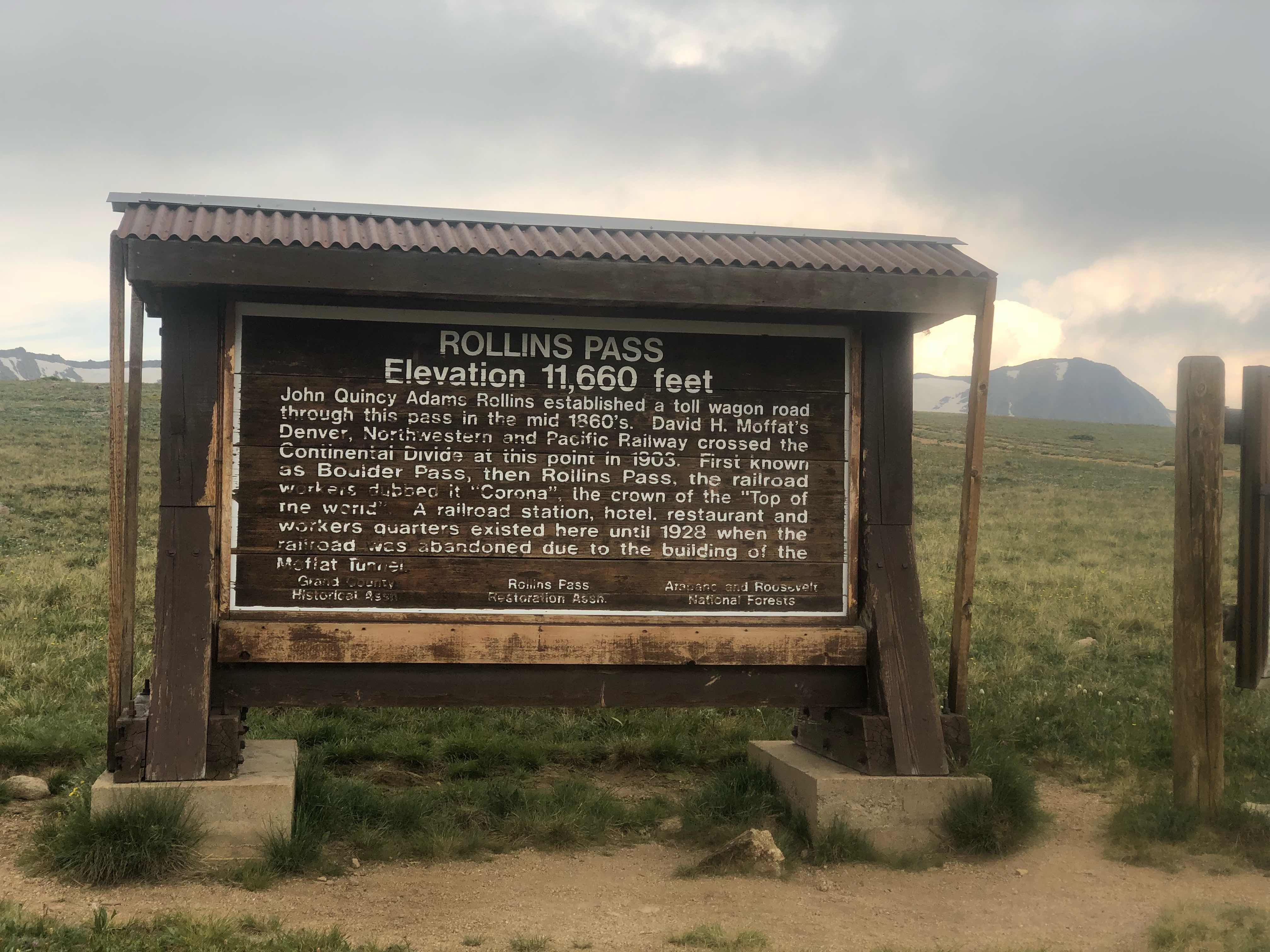 Rollins Pass
The alternate that I took was actually an old railroad line. I had the same views as Clouds and Ripple, but I had a little extra protection from the wind. Casper, Clouds, and Ripple all caught up with me at the pass. We took an extended break to let a thunderstorm pass. We could see lightning in the exact direction we were going to be hiking. It was a long 4 miles before we would drop down below tree line. The storms seemed to be letting up and when I didn’t see anymore lightning for 20 minutes I decided to get going. I had a moderate climb ahead of me and just wanted to get it over with. I had put on my rain gear at the pass, but within 15 minutes it still hadn’t started raining. I was getting over heated so I stopped to take it off. I was stoked that for the next forty miles of trail. It should be much easier hiking. I was thinking that this last section was like the Whites in New Hampshire or S. Maine along the AT. My daily mileage has just plummeted lately just like it did on those sections. I really hadn’t been expecting that, so it was more than a little frustrating for me. I was also thinking that unlike those sections of the AT, the cdt was hard, but it wasn’t trying to hurt me. In the Whites I fell down and sliced open my leg. In S. Maine I busted my ankle. Just as this thought crossed my mind I tripped over a rock and landed hard on another rock. All of my weight was transferred into that rock via my right knee. The pain was unbelievable. I looked down expecting to see bone sticking out of my leg, thankfully that was not the case. Instead I was bleeding all over the place. I took my pack off and grabbed my bandanna. I made a pressure bandage to try to stop the bleeding. I could barely even look at my knee. Once I got the bleeding somewhat under control I took a look. The gash was really deep and there was a lot of dirt and debris in it. I couldn’t bring myself to scrub out the dirt. I poured some hand sanitizer on the wound and my immediate thought was that it felt like adding gasoline to a fire. The string of profanities that came out of my mouth would have made a sailor blush. It was right around this point that Casper, Ripple, and Clouds found me. They all jumped into action right away. We cleaned the wound as best as we could before adding some iodine and putting on a bandage. I had also scraped my shin and outer thigh, but those injuries were of little consideration. To make things even more interesting more thunderstorms were approaching. I urged them to move on, but they didn’t want to leave me. I finally convinced them that I would be right behind them. I put my rain gear back on, smoked a cigarette to calm my nerves, and got moving. I was able to continue hiking, but I was definitely hurting. 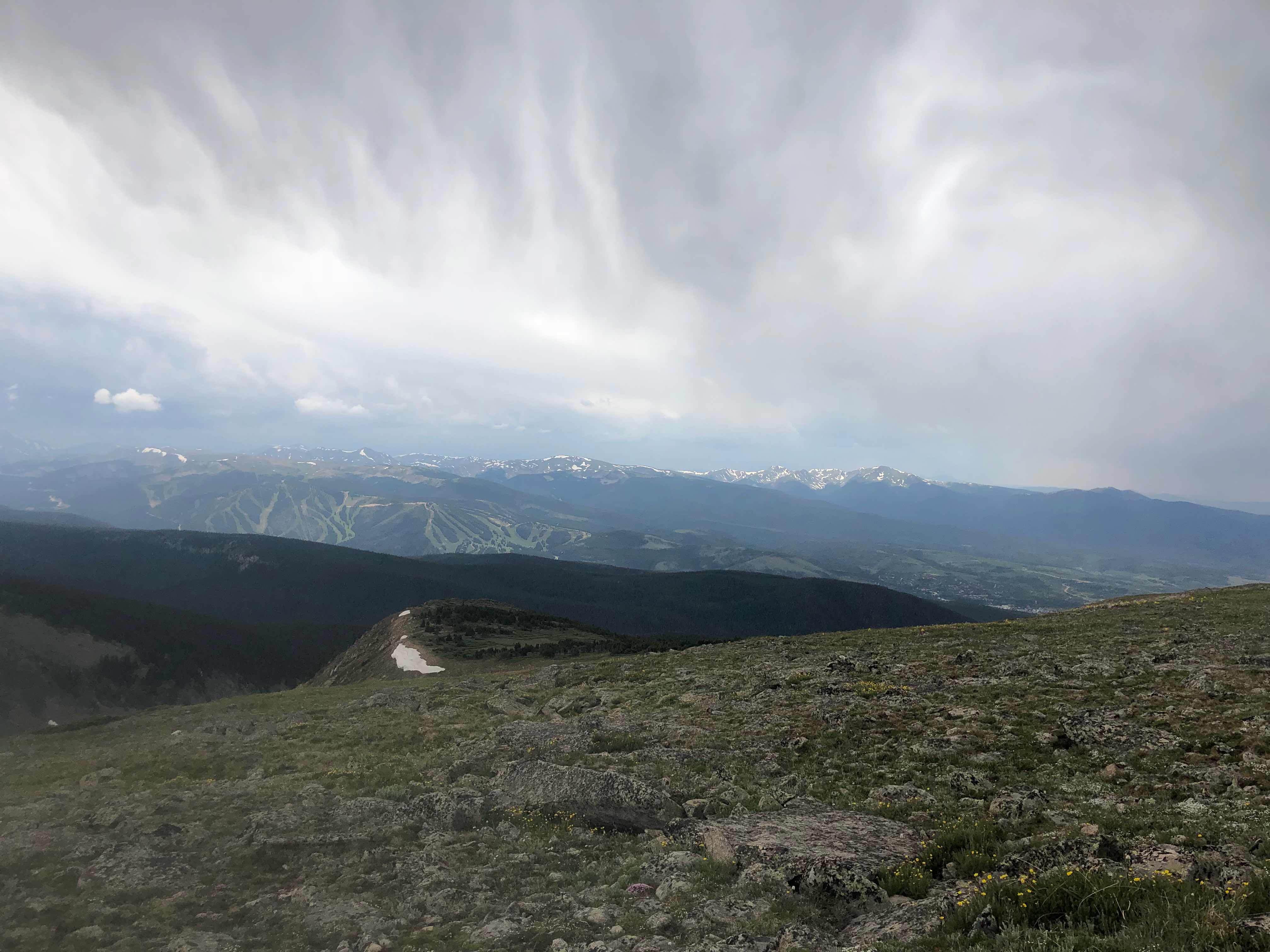 Approaching storms
Once I made it below tree line I was able to slow down. All things considered I was very lucky. Nothing was broken. I was just a little worse for wear. I had a major limp, but the bleeding had stopped. My only concern now is keeping the wound clean until I can make it to town. I’ll probably have to see a doctor to get it properly cleaned out. I might need stitches, but I don’t see how that is a good idea. I think they will just tear out when I start hiking again. I think my best bet is to get the dirt removed and just superglue it shut.
I managed to hike another nine miles after falling. It wasn’t easy, but I managed. Luckily the trail became easy hiking after about three miles. Going uphill and hiking on flat ground isn’t a problem, but going downhill is pretty horrible. It isn’t the open wound that hurts. My kneecap took a huge hit and is very painful when jostled by the downhill momentum. Unfortunately, tomorrow’s hike will be mostly downhill. Oh well, I’m sure that I will manage. 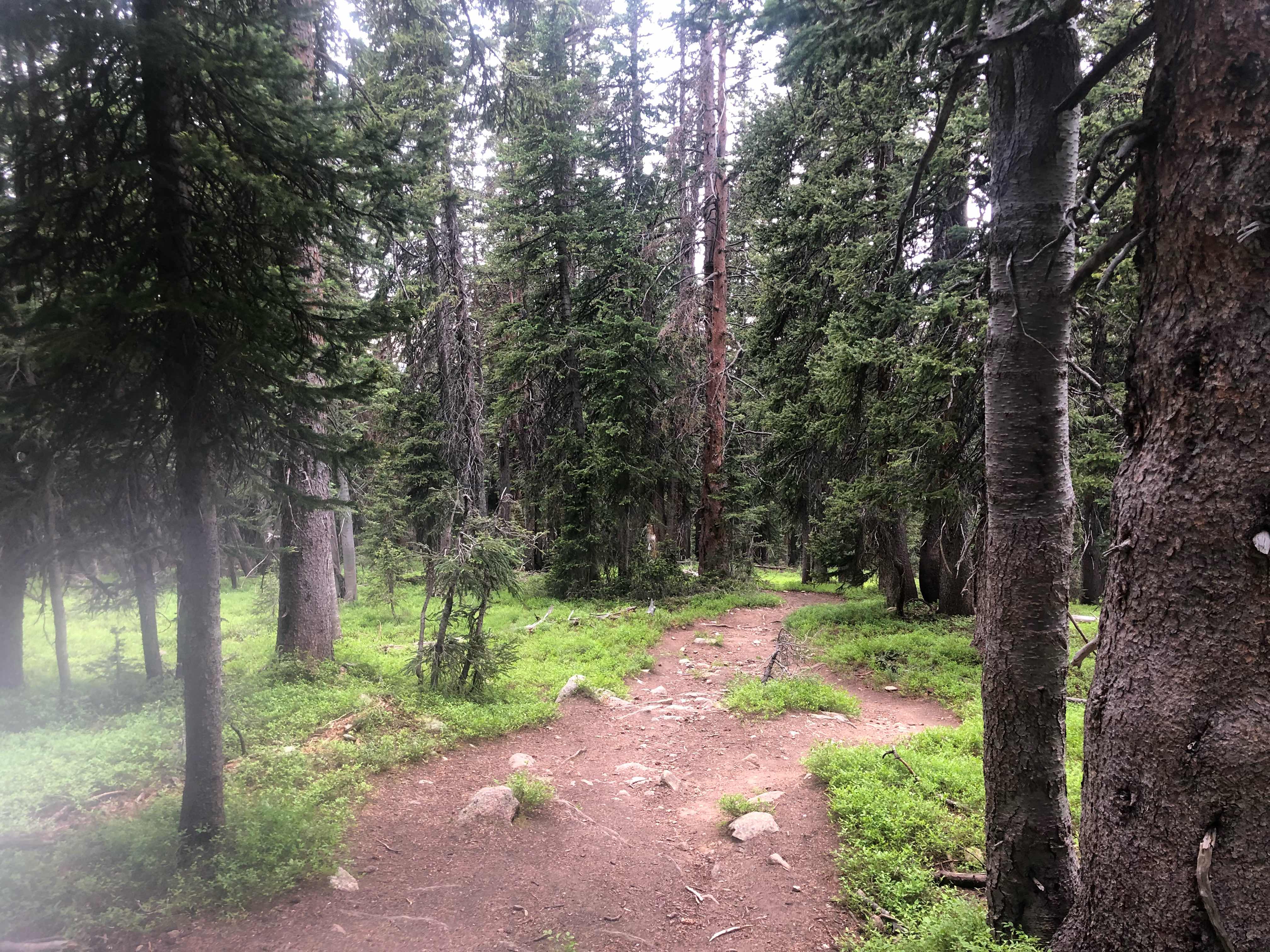 Flat ground through a pretty forest 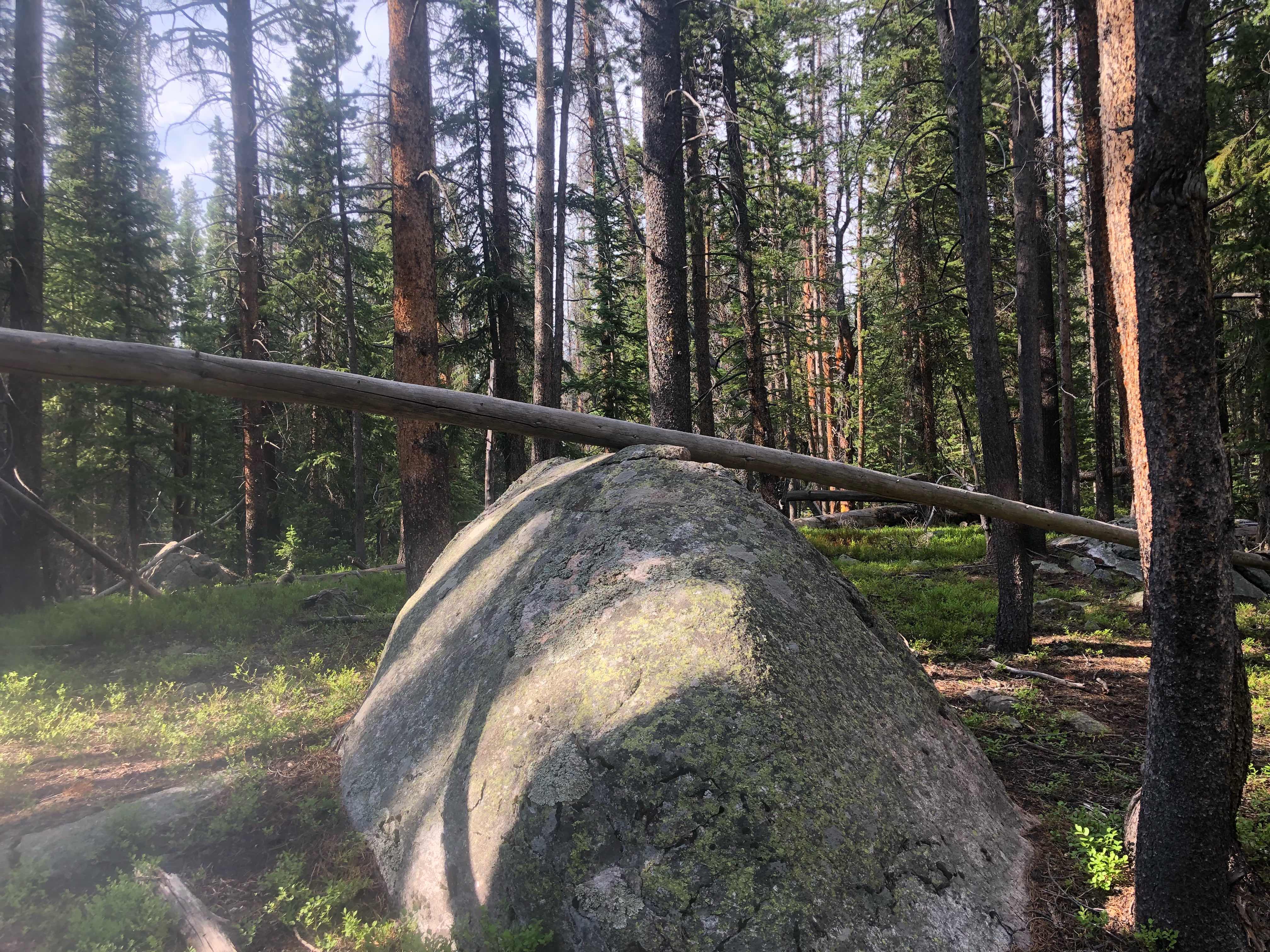 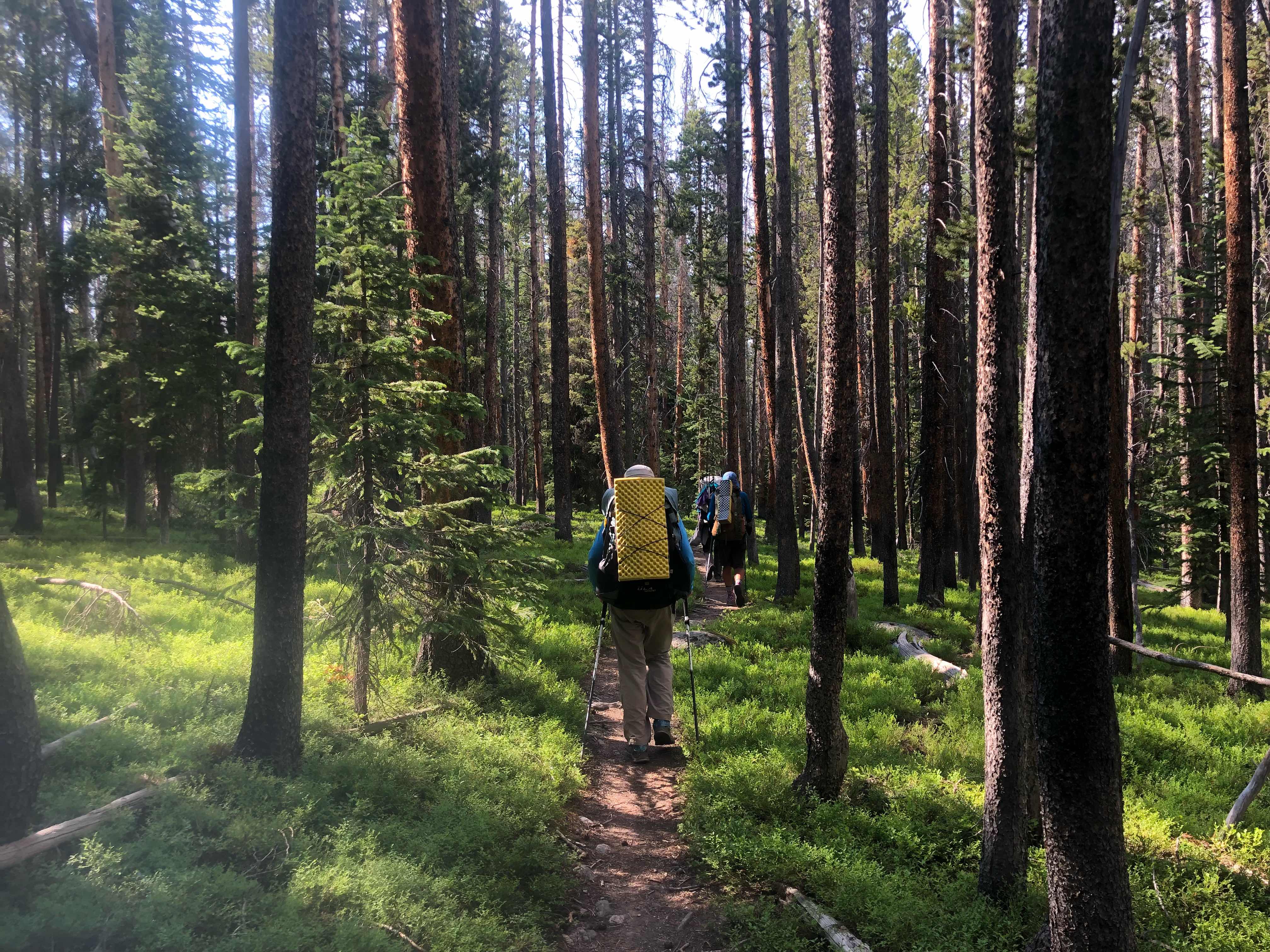 Working hard to keep up with Clouds, Ripple, and Casper
I made it to my end of day goal, the Indian Peaks Trailhead. I was stoked that there was a picnic table there. Cooking and eating dinner is so much more enjoyable when I’m not sitting in the dirt. While setting up camp I met a few new hikers, Sequoia and Forest. I had heard about Forest before even starting the trail. He also works in Telluride and when I told people I was thruhiking the cdt this summer I was constantly asked if I knew Forest. I did not even though we lived in the same building. He had also had the same thing happen to him. It was nice to finally meet each other. Sequoia, Forest, and Casper ended up hiking on a few more miles. Clouds, Ripple, and I cooked and ate dinner together at the picnic table. After dinner Clouds helped me rebandage my knee. Pouring iodine into an open wound isn’t very much fun, but it was slightly better than hand sanitizer. As I was walking back to my camp it dawned on me that I had hit 1,400 miles today! I am halfway done with the trail now. It was getting late and was almost dark, but I took a minute to make a mile marker. I didn’t have the energy to gather twigs, rocks, or pinecones to make the marker. I just used what I had in my hands, dirty bandages from the first time I dressed my wound. It is definitely not one of my better mile markers. 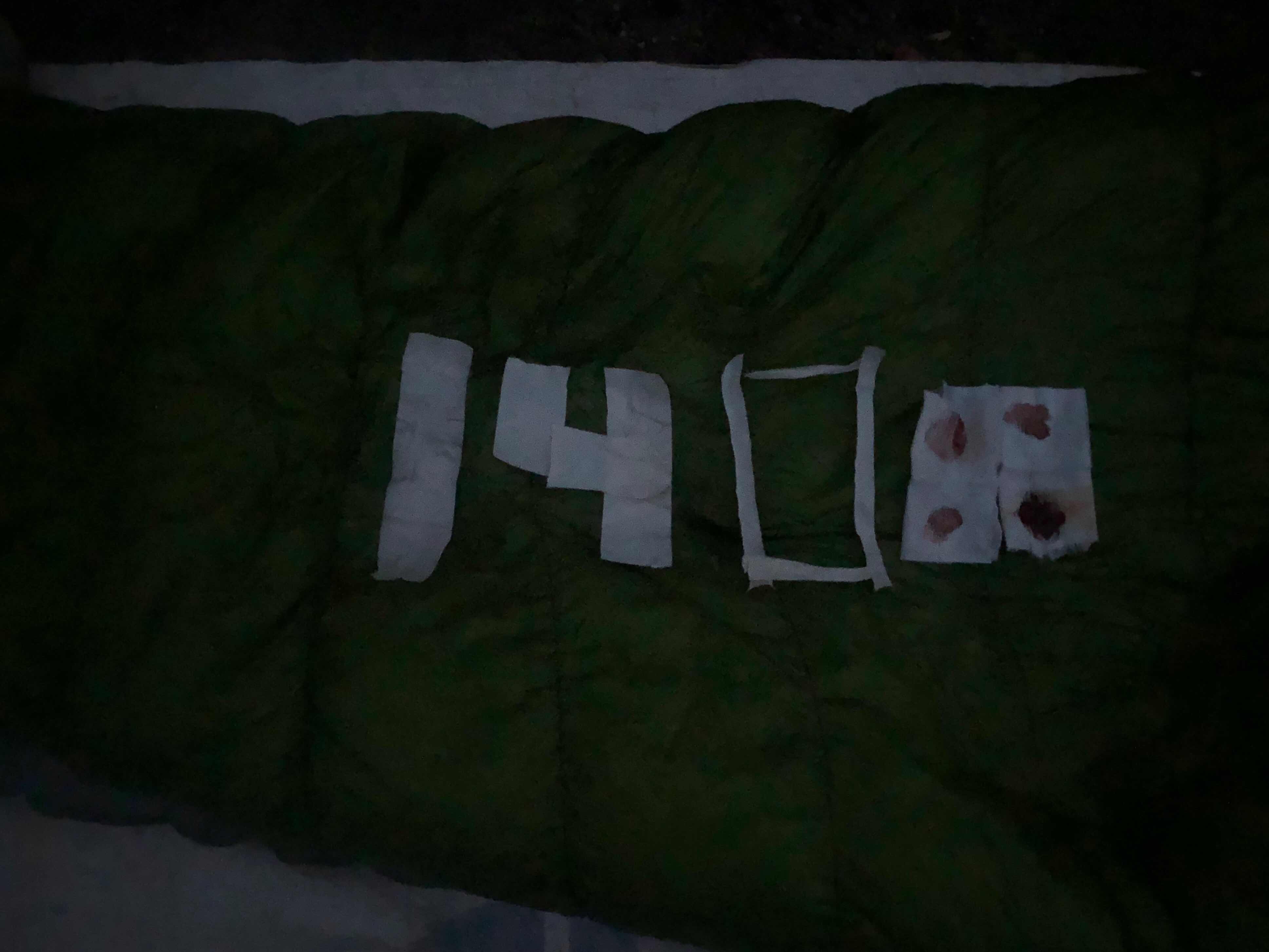 Points for creativity?
“No one is without troubles, without personal hardships and genuine challenges.  That fact may not be obvious because most people don't advertise their woes and heartaches.  But nobody, not even the purest heart, escapes life without suffering battle scars.”
- Richelle E. Goodrich