Now that this trip is almost over I have finally figured out my sleep system. Even with the chilly nights I ha e been staying warm and toasty. I was camped about 30 yards from Piñata, Straws, and Z last night. I have gotten so used to waiting to pack up until I hear them moving that it was strange to not have those audio cues. I set my alarm for a later wake up time. I have finally come to terms with the fact that I won’t be leaving camp at six o’clock anymore. The sun isn’t rising until 6:35. We had decided to have hot coffee again this morning, which also meant that we would all sleep in. As I was packing up my bag Piñata and Straws walked past. Piñata is very high energy and hasn’t adapted well to the later start time. He reminds me of a kid on Christmas morning. We enjoyed our hot coffee with left over marshmallows and graham crackers. I don’t think we left camp until almost eight o’clock. I was especially motivated to hike the first fifteen miles of the day. I forgot to buy cigarettes in East Glacier and I ran out last night. I was hoping I could buy more in Many Glacier, I was also motivated by the thought of restaurant food for lunch. 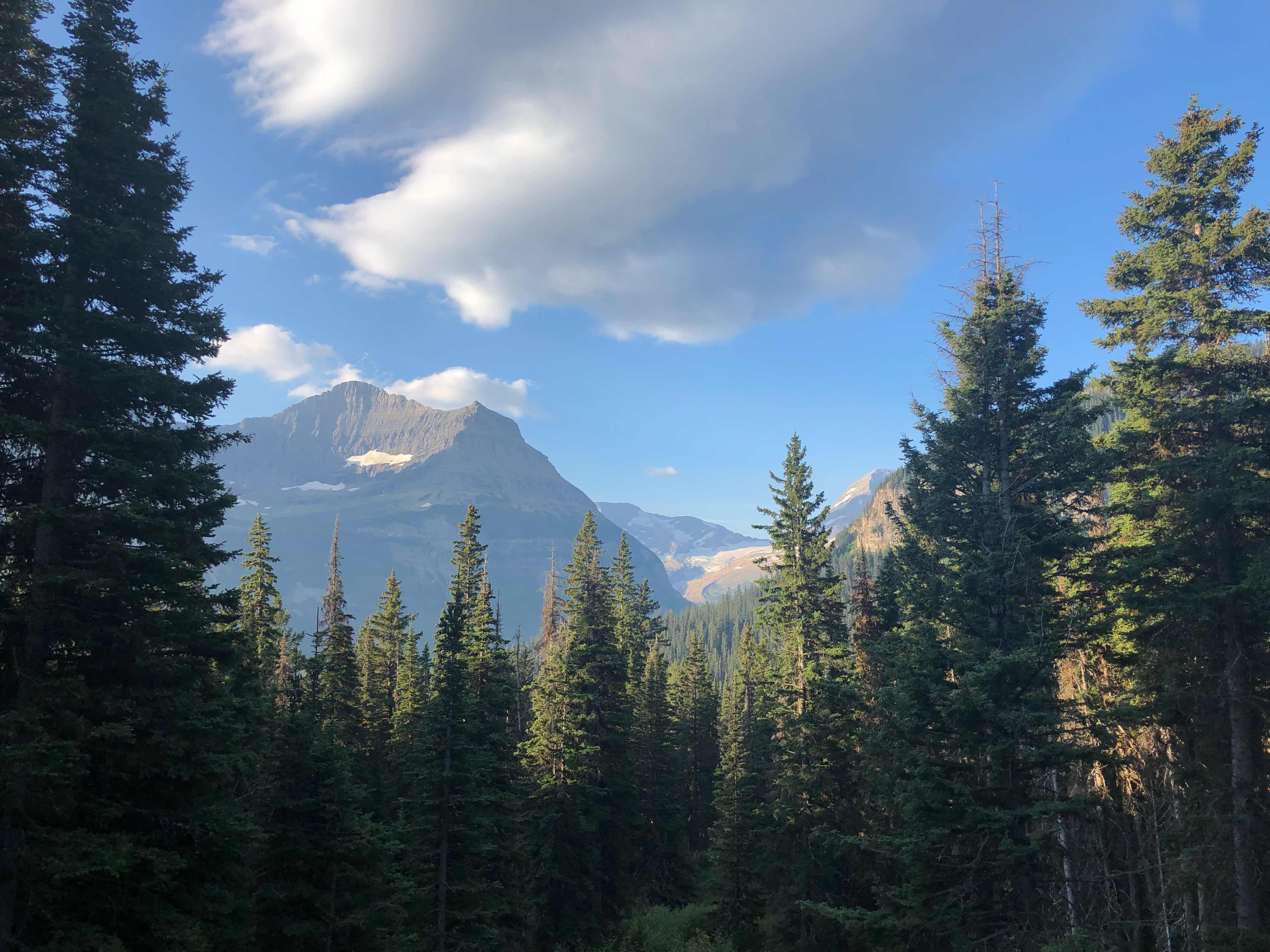 First view of the day
The more the morning progressed the colder it felt. The weather has been very erratic lately. I’m constantly taking off and putting on my layers. It literally changes from minute to minute. The wind was much calmer today, which made things more manageable. We also started the day off with a nice, long, well graded climb. Z raced ahead of me and I just couldn’t keep up. My calf muscles were really tight and they refused to loosen up. I lost sight of Z for awhile and couldn’t believe that he could have pulled away so far and so fast. It turned out that he had gotten off the trail to see some elves about some cookies. I raced up to the top of the pass trying to catch him. You can understand my confusion when he caught up to me instead. 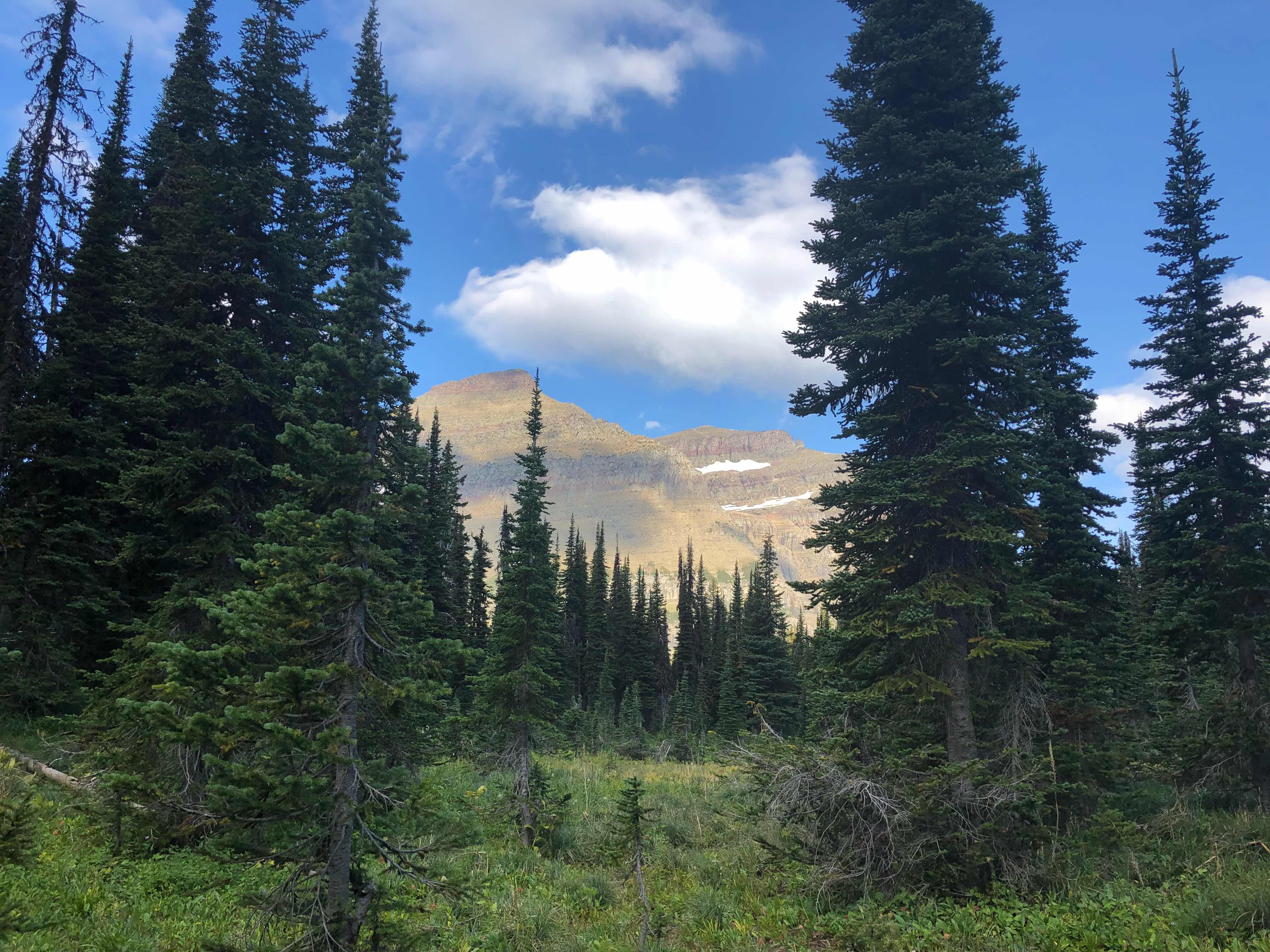 Even when below tree line there are still good views 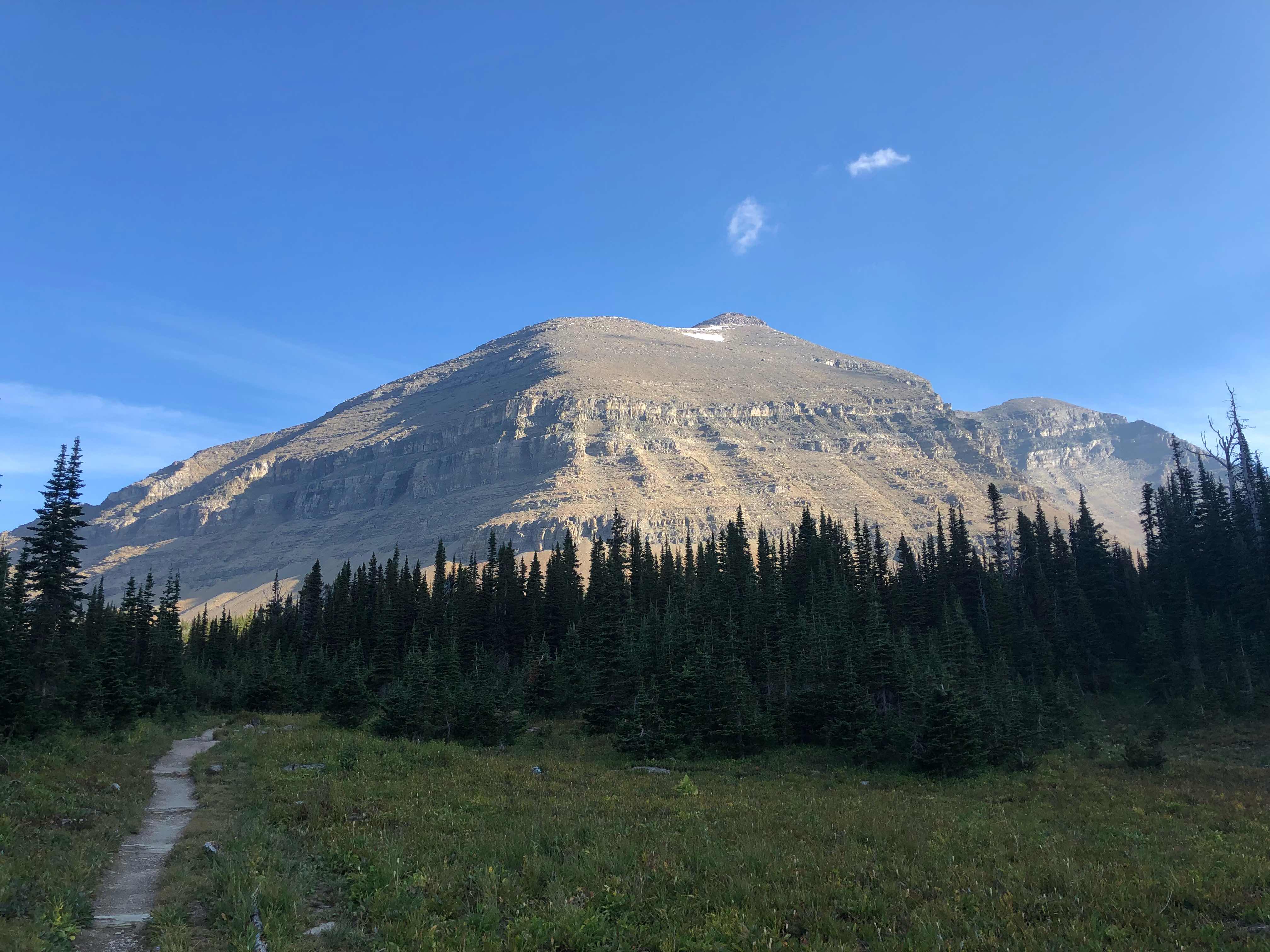 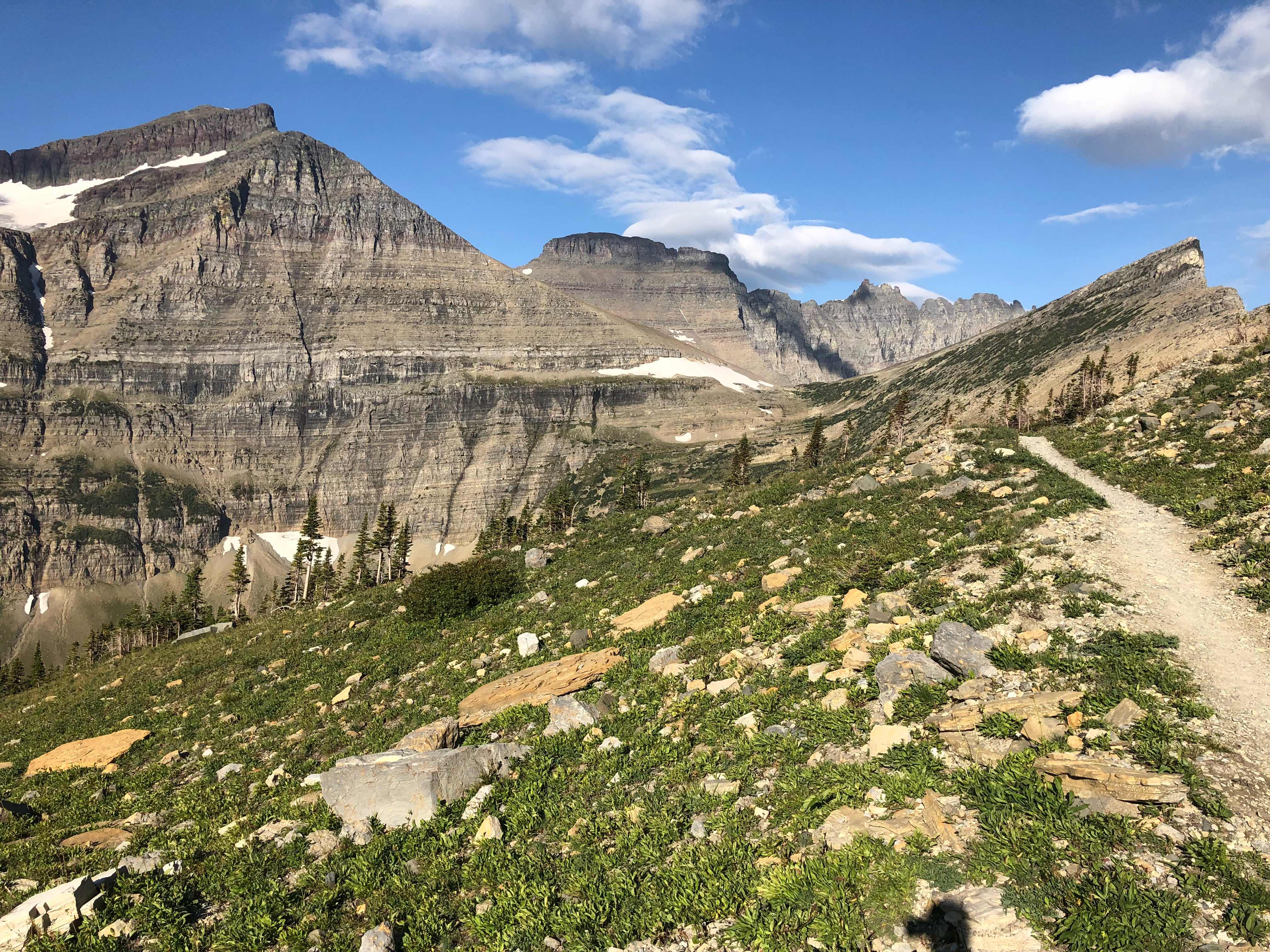 One of these peaks is called Bishops Cap 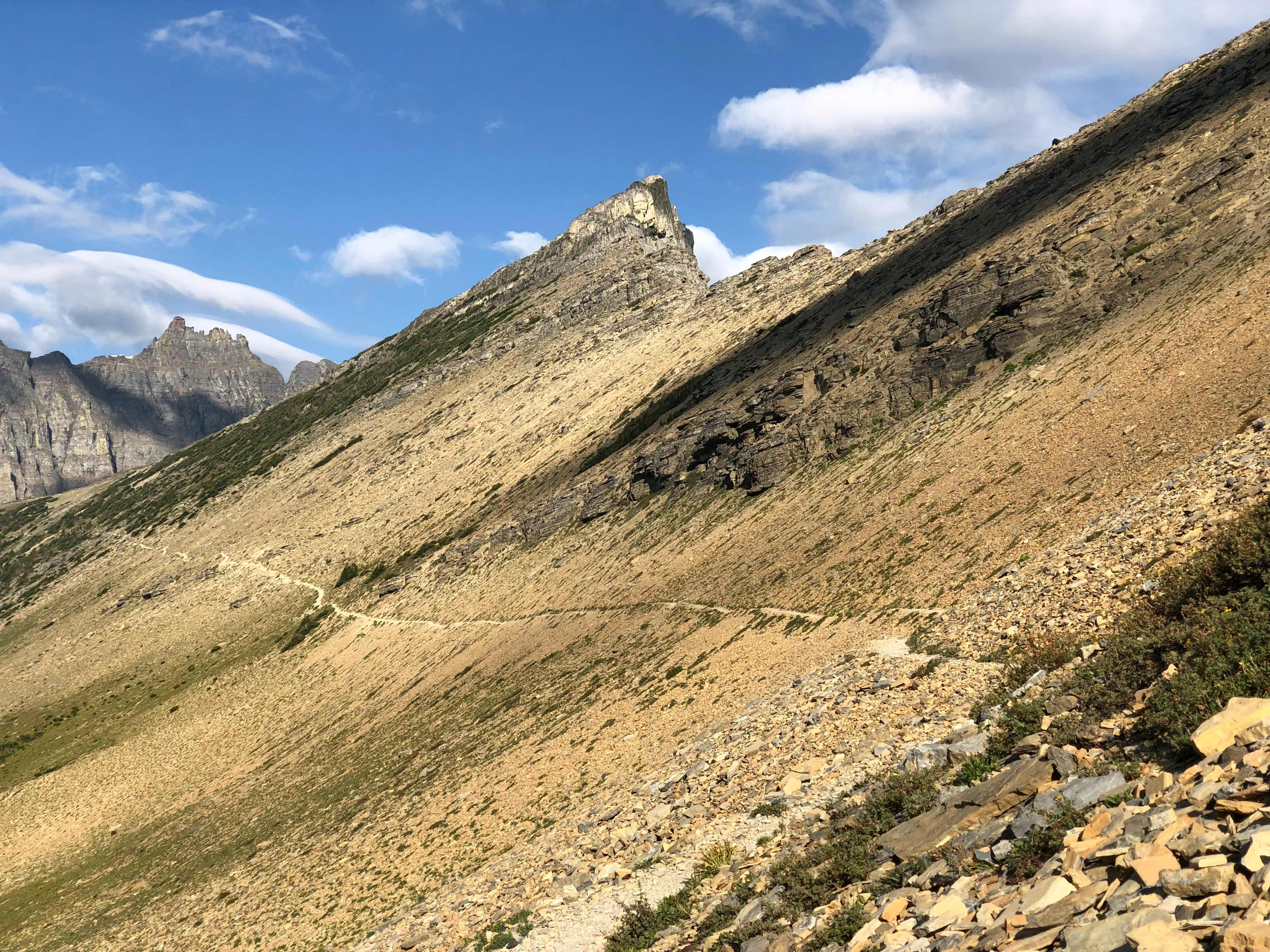 Trail up to Piegan Pass 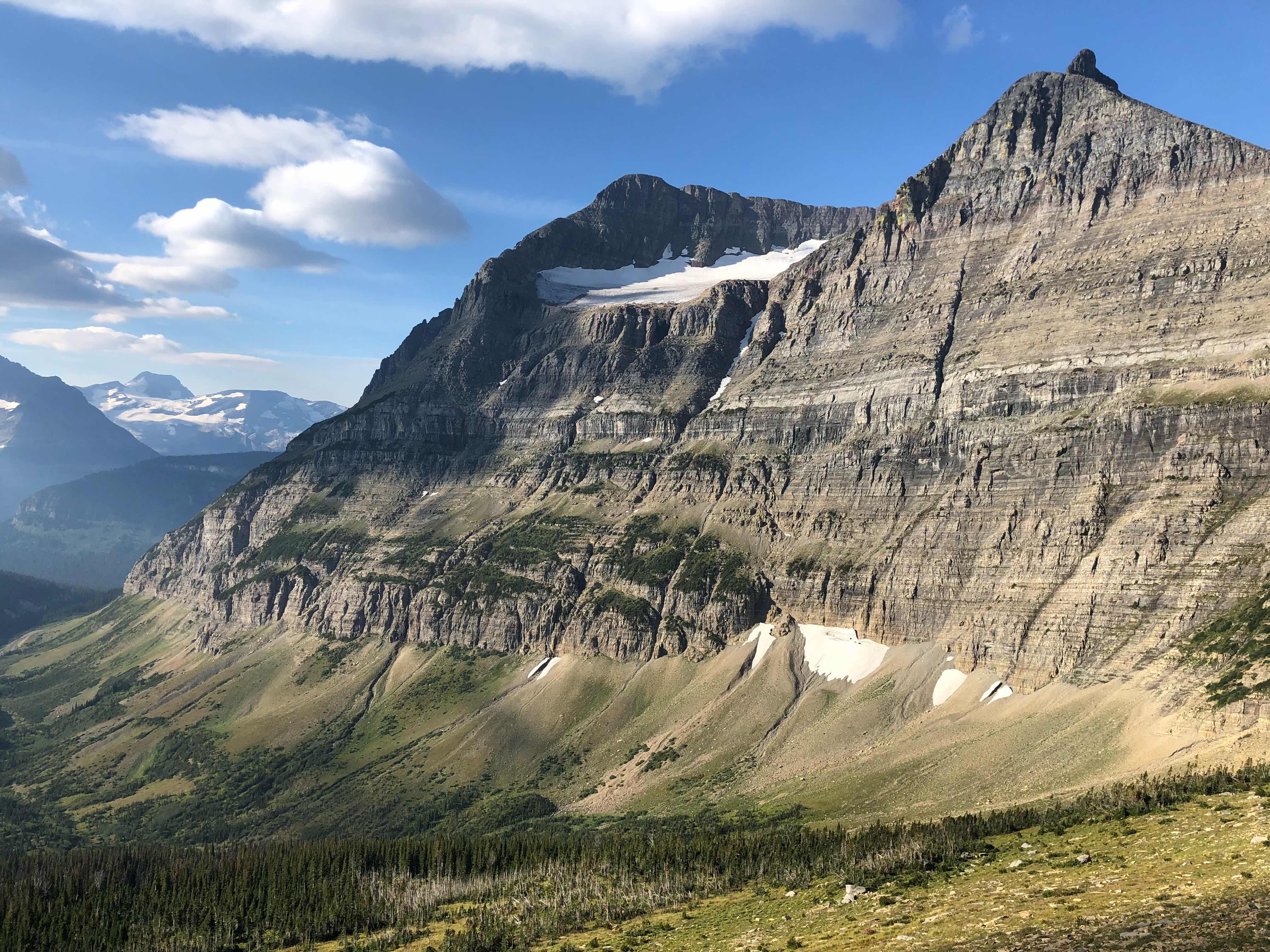 Cool color striations
I really enjoyed the hike up to the pass. The wind was much tamer, but still present. For the first time in days it wasn’t overcast, although the haze had increased. I waited for the rest of the group at the top of the pass. It was nine more miles to town, but it was mostly downhill. I was on a mission for cigarettes and food. We have eaten extremely well the last few days. I went to bed completely stuffed last night and left camp full this morning. I was also almost out of food because I had planned on buying more snacks in Many Glacier. I pulled away from the group pretty quickly. Later they described seeing me racing down the trail and didn’t even try to keep up. I think Z described it as a futile effort. He was only motivated by food and coffee. He said he couldn’t find that lower gear to keep up with me. The hike into town was spectacular as well. I hiked this area of the park in 2013 or 2014. It is crazy how much the glaciers have receded in that short time frame. I made it to the Many Glacier hotel a little before one o’clock. Unfortunately, they did not sell cigarettes, but a nice employee gave me one. I got a coffee and donut to tide me over until the others showed up. I had to wait almost forty five minutes. They all grabbed a coffee and we walked a road to get to Many Glacier. 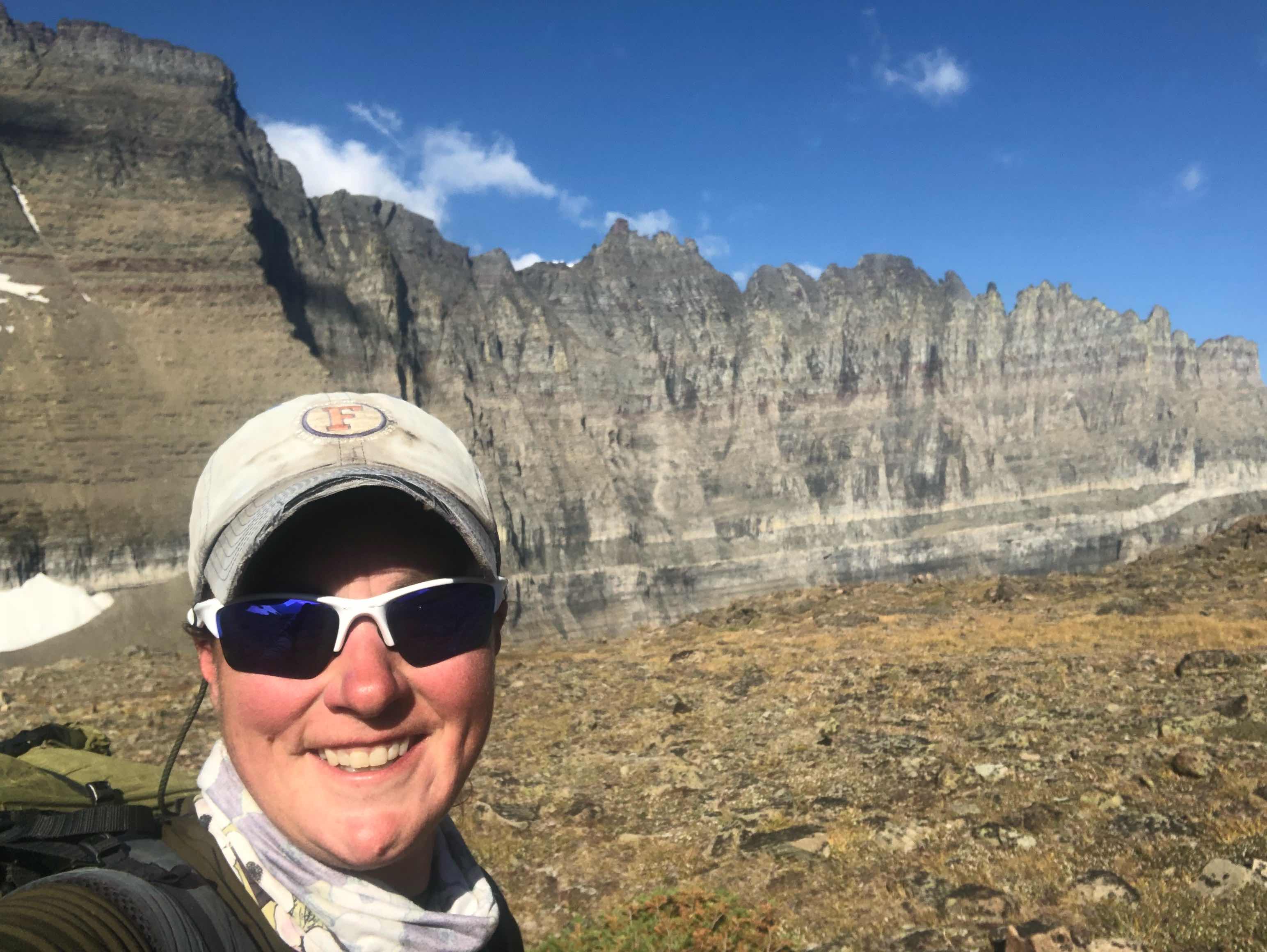 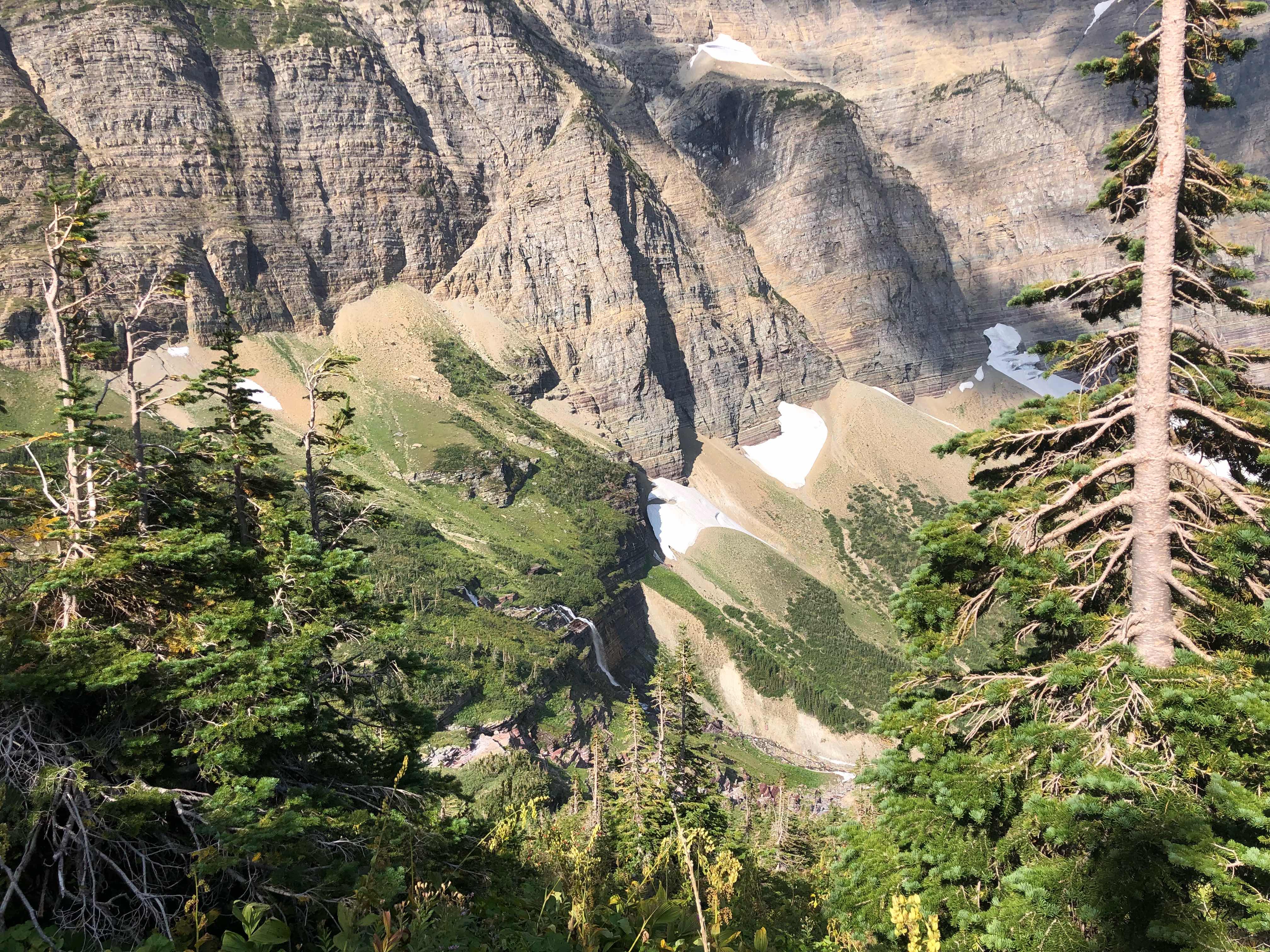 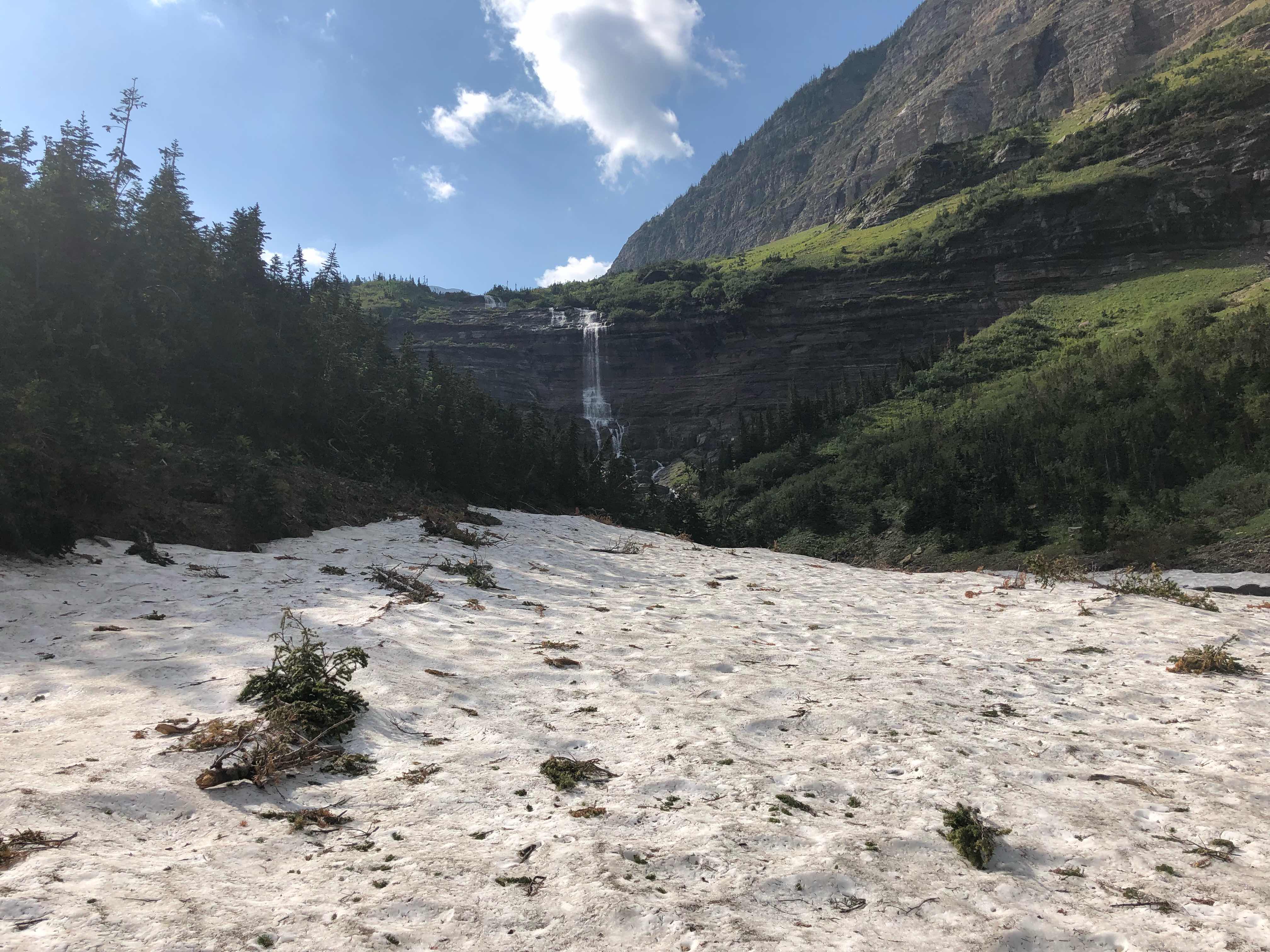 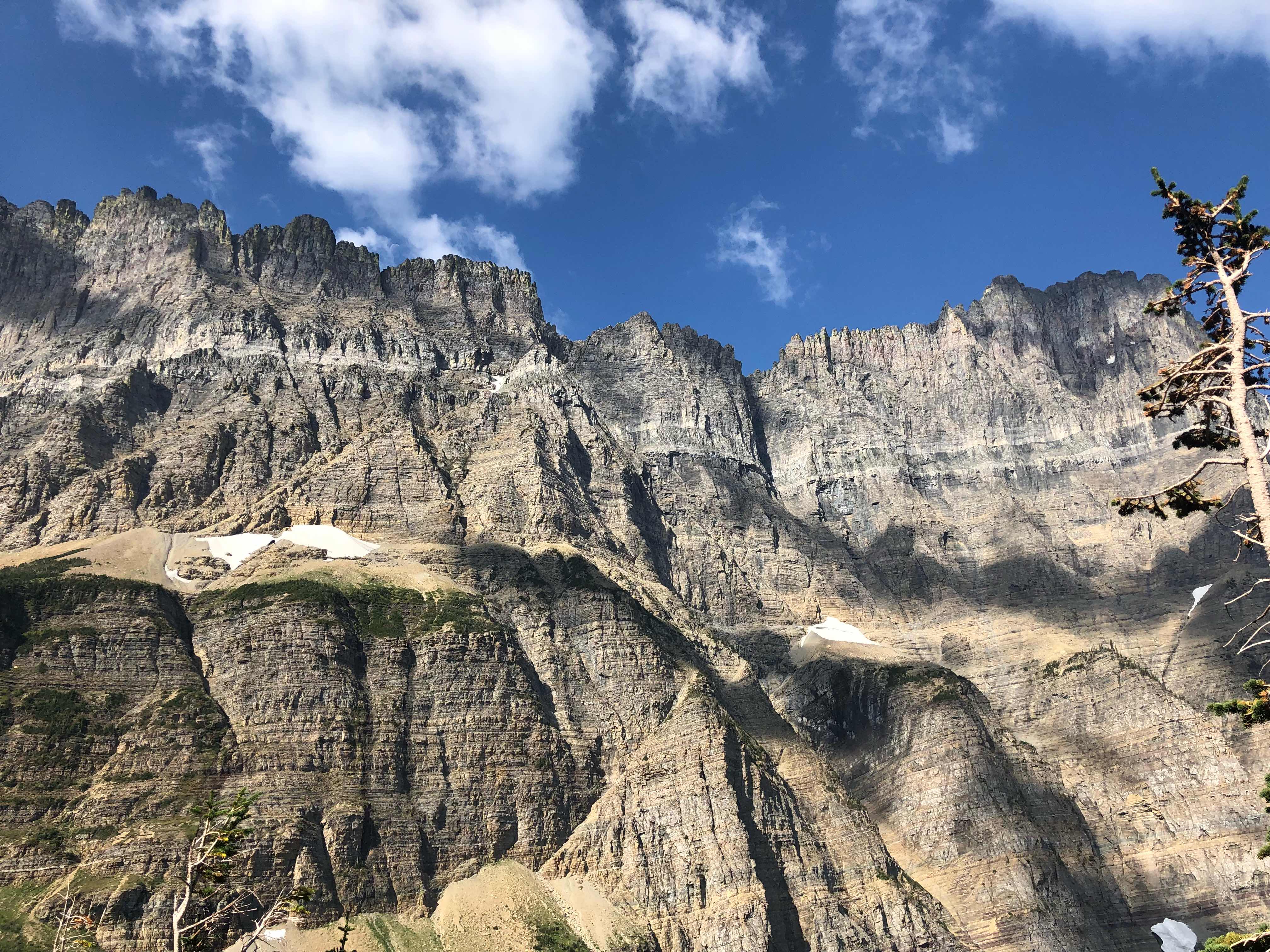 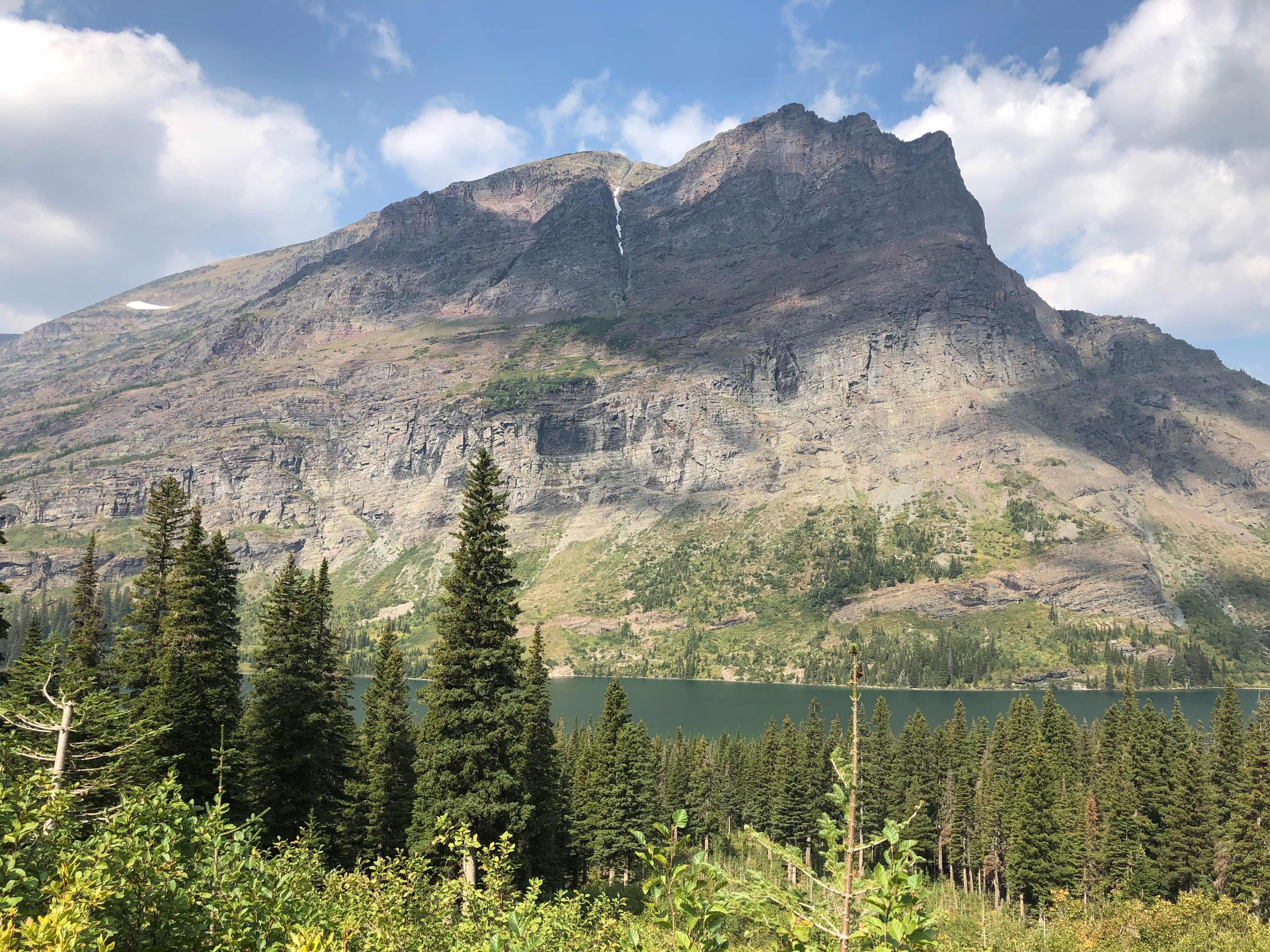 Swiftcurrent Lake
Many Glacier isn’t really a town, it is more of a hotel, campstore, gift shop, and campground. We bought enough food for tonight and tomorrow. It is either way too much or way too little. Then we had lunch at a touristy restaurant connected to the hotel. The good news was that the gift shop sold cigarettes! I think everyone was relieved that I found cigarettes to buy. Lunch took a lot longer than planned. The food was really slow coming to the table. I had a bacon cheeseburger, fries, and a quinoa and orzo salad. Everything was just ok. It was edible and something different than ramen, snickers, and m&m’s. I was pleased. We repacked our packs, used the bathroom, and bought more food. Things may or may not be getting out of control in the food department. 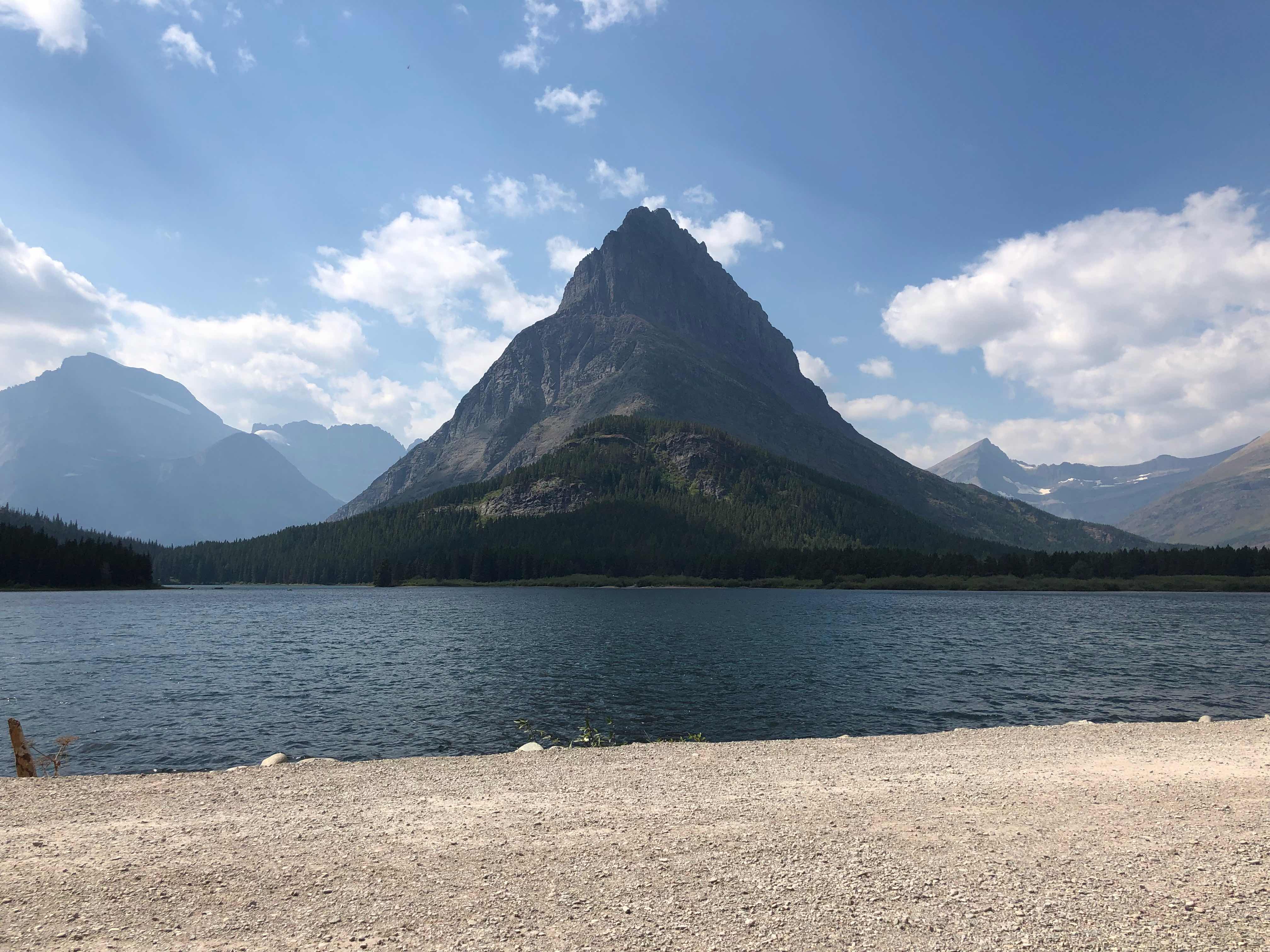 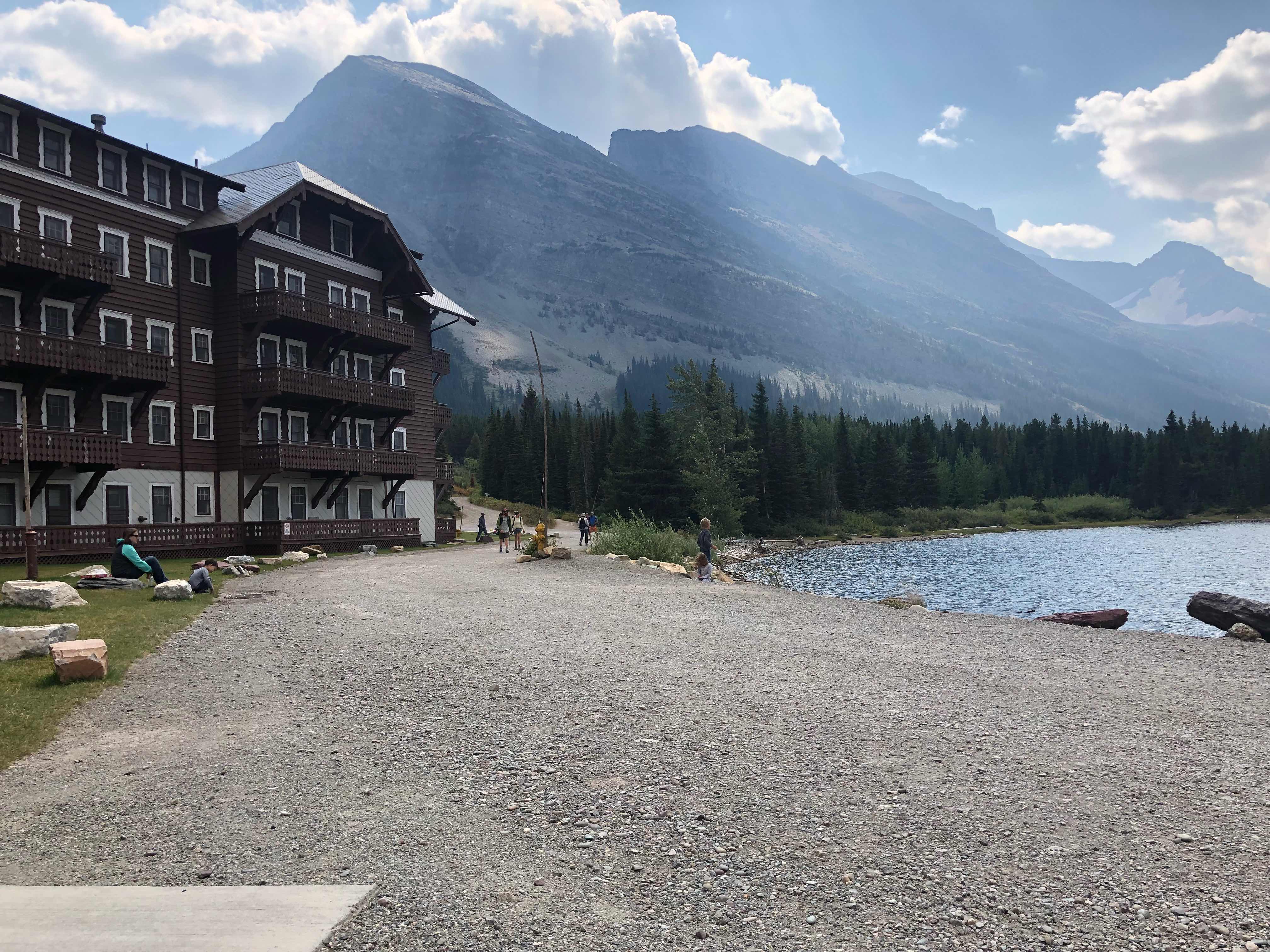 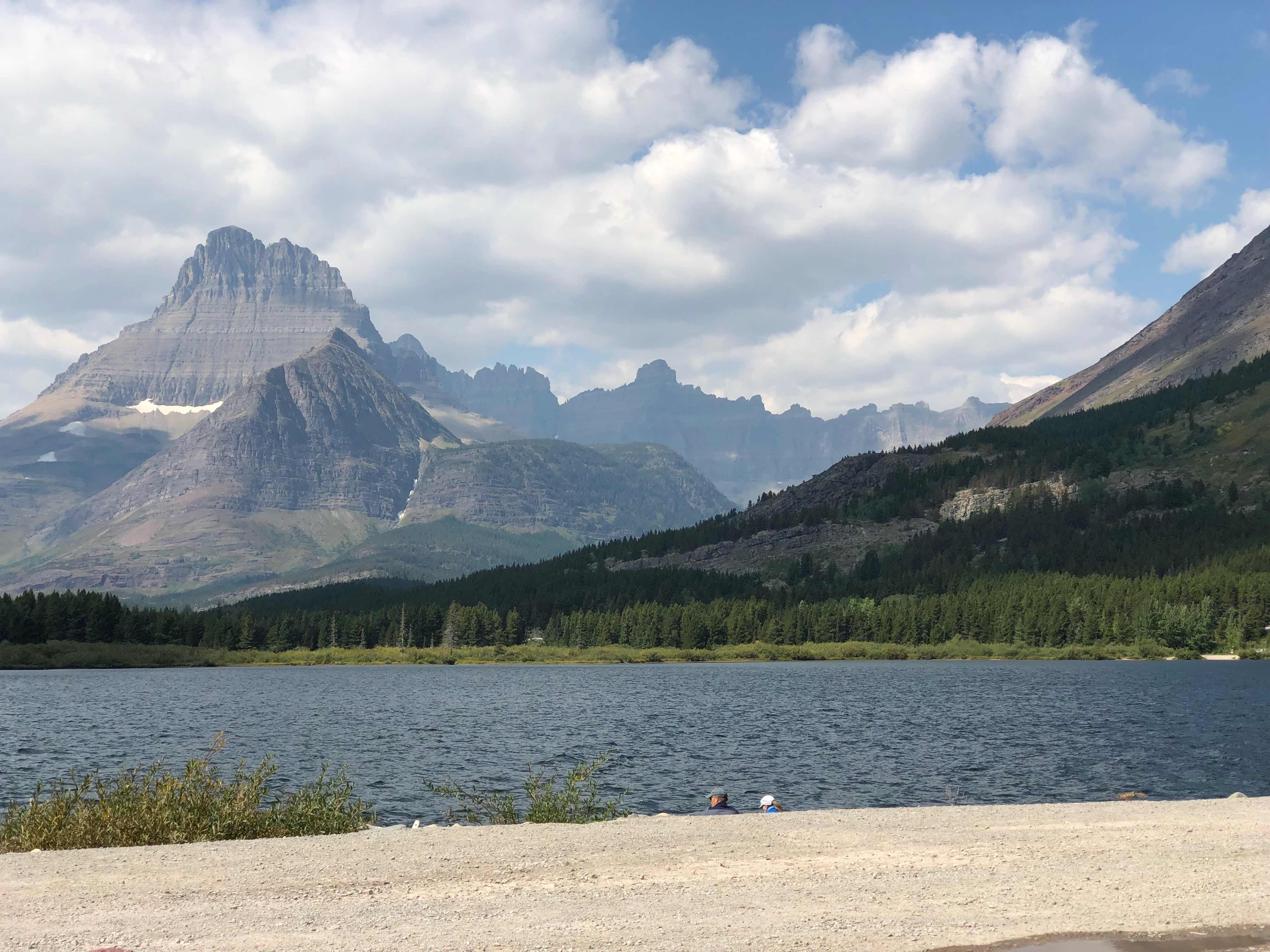 Many Glaciers
The remaining seven miles into camp were hard. I was tired from running all morning. Thelong town stop and town food had us all feeling sluggish. We started of with a two mile road walk. There wasn’t much of a shoulder and the giant cars did not share the road with us very well. We got several nasty looks from drivers who seemed to dislike us for having the audacity to be pedestrians walking in a National Park. Our moods improved greatly when we got off of the road walk. We spread out a little on the hike into camp. I listened to a podcast about the medical miracle of using maggots to clean wounds. It was really gross and fascinating at the same time. The Stuff You Should Know podcasts are all pretty entertaining. We arrived to camp to find it almost completely overrun. There were close to ten people there. We found a spot to camp at, but we are all close together. Dinner was a little more subdued than normal with the large group completely taking up the food prep area. We managed to eat nonstop for almost two solid hours. Straws and I packed out sparking rose in a can. Wine in a can is starting to become a thing. I enjoyed having bubbles with my dinner. 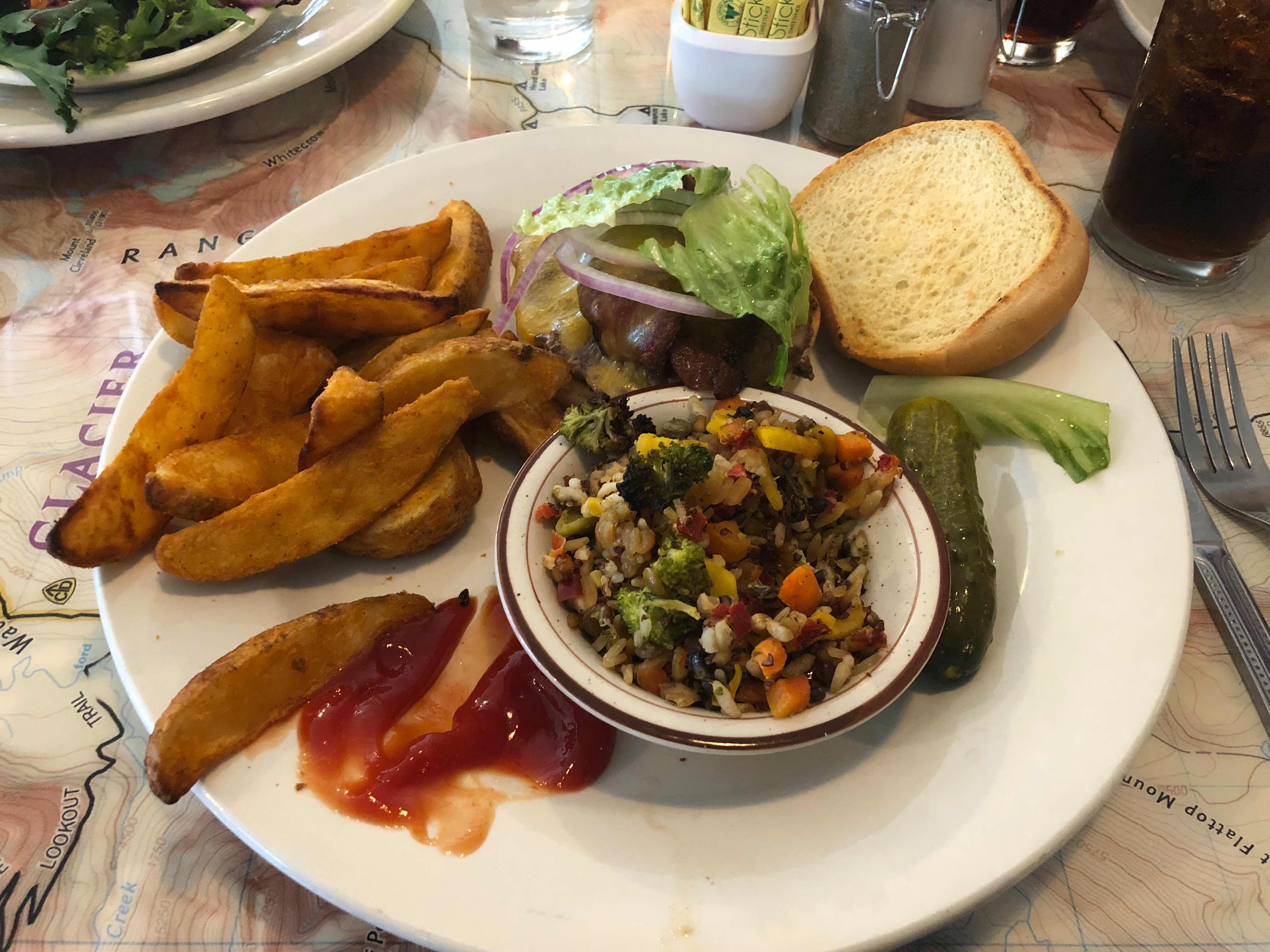 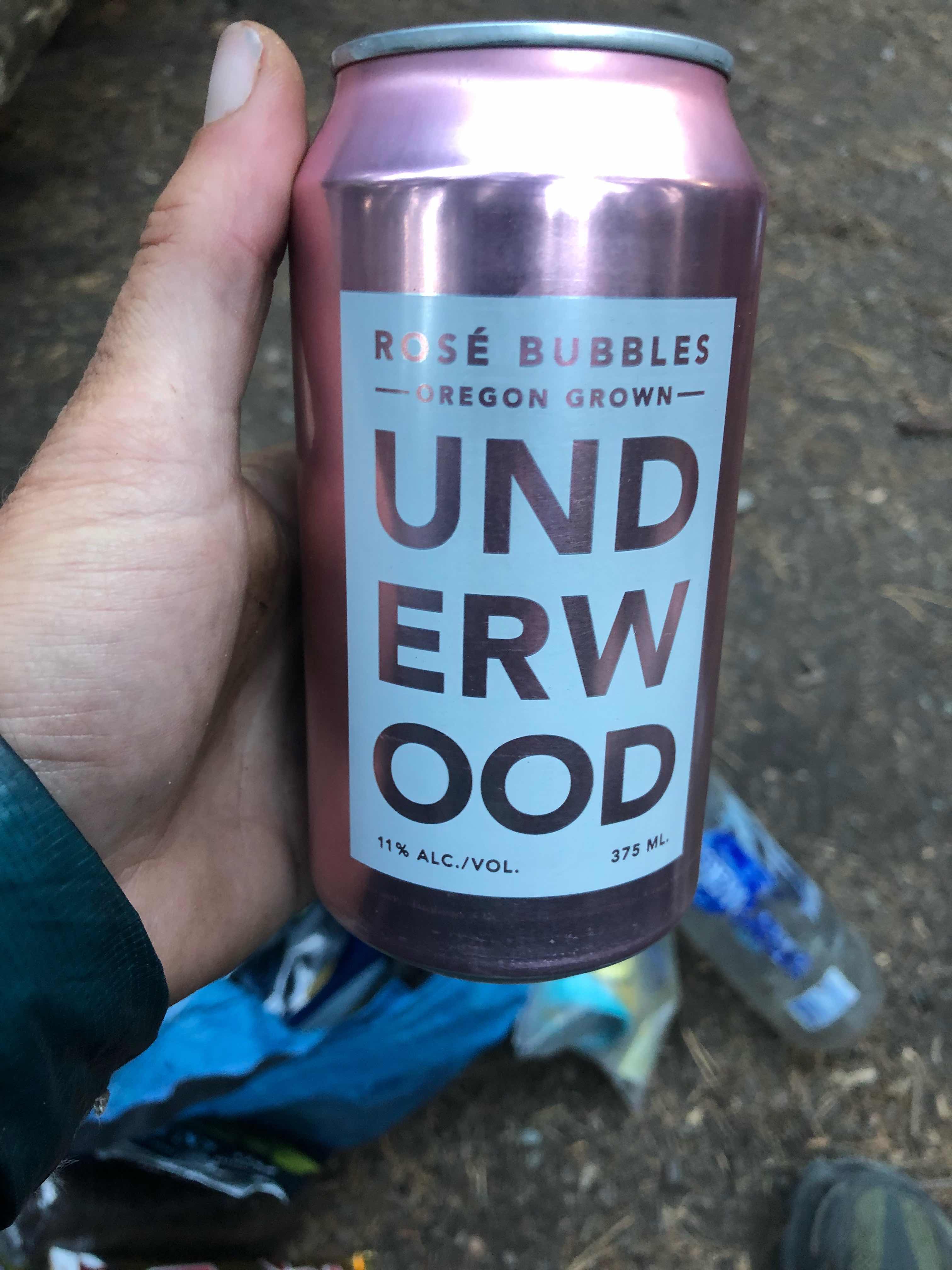 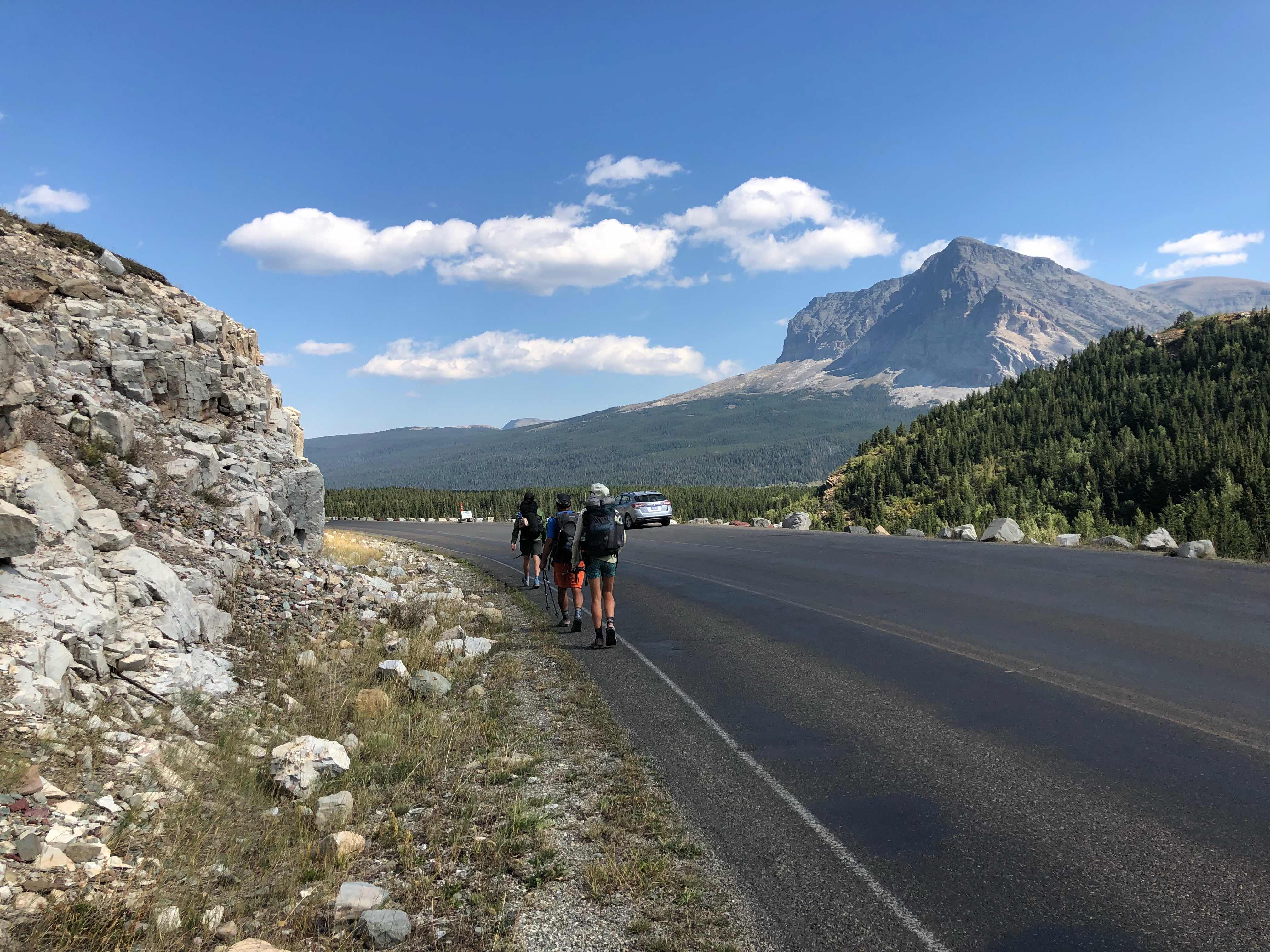 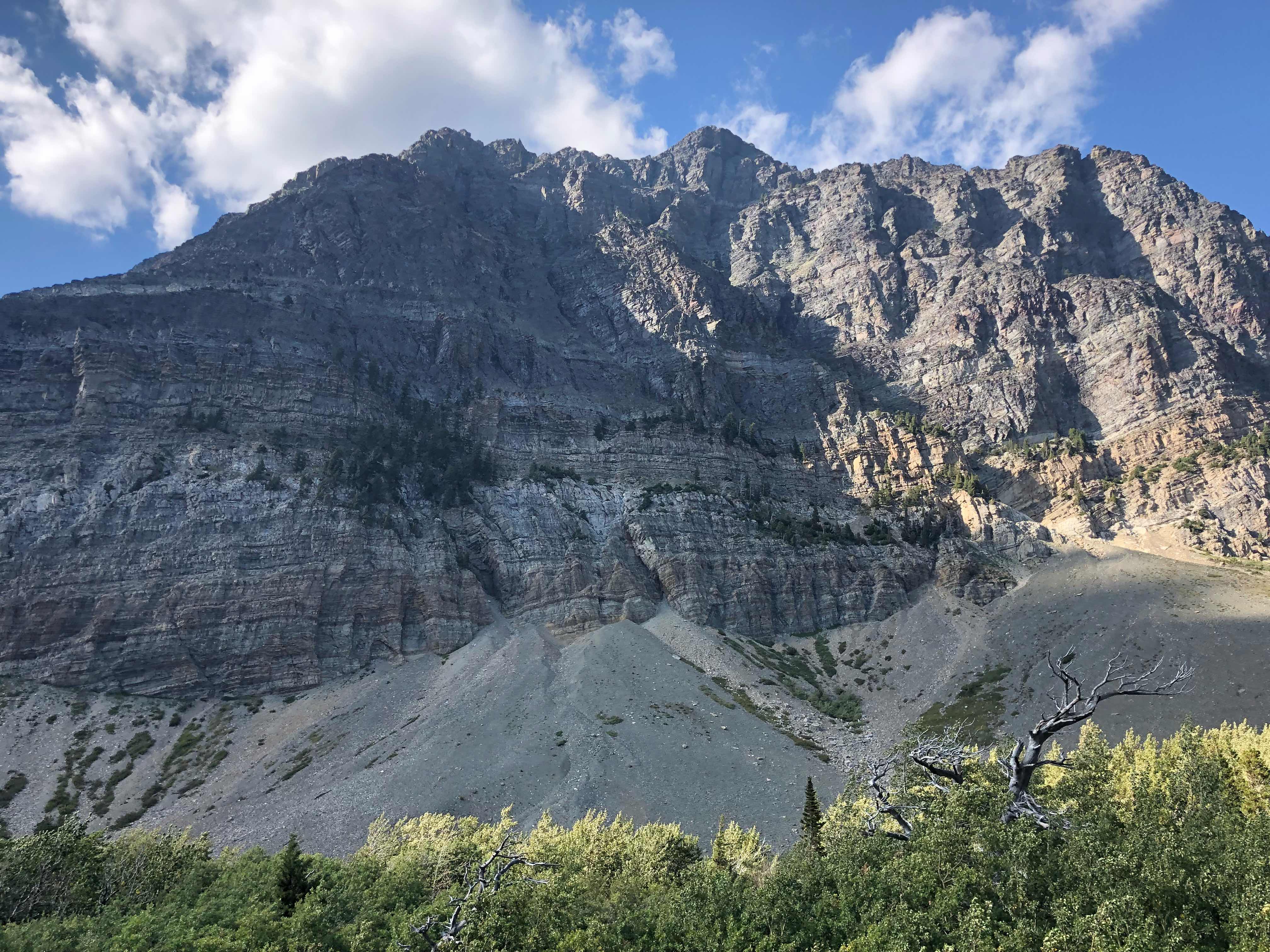 Good views from the road as well 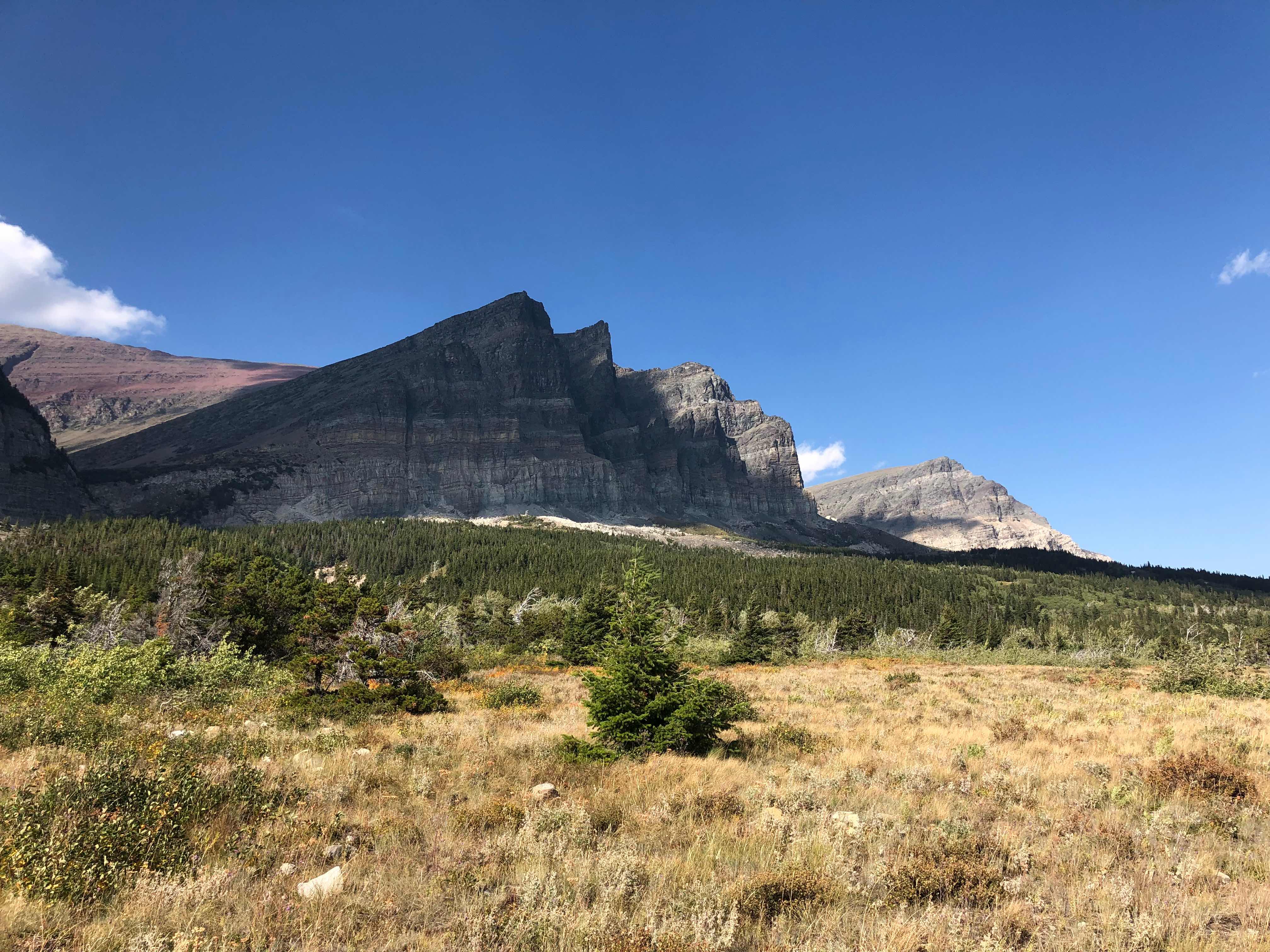 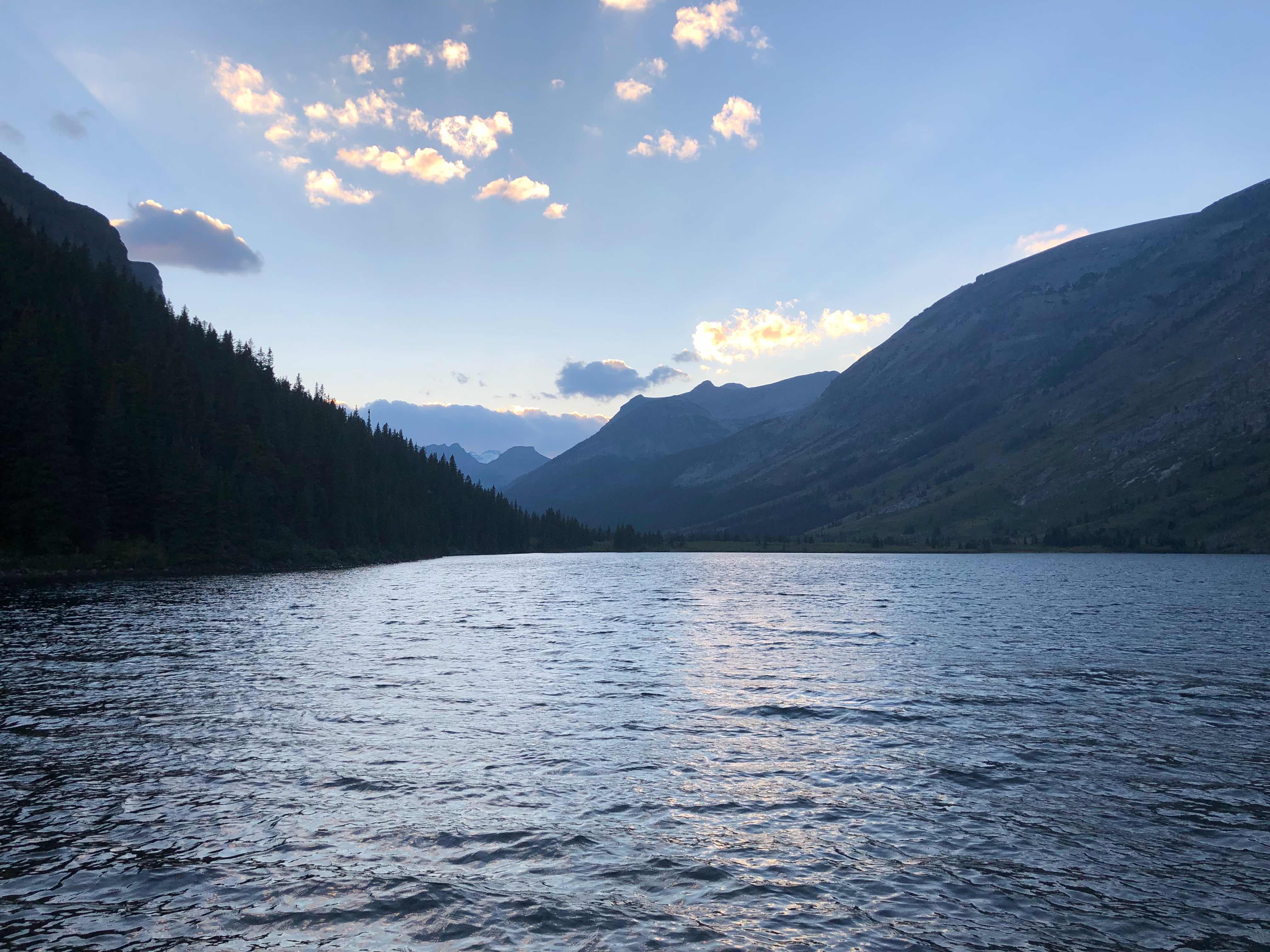 Lake next to camp
We have one more sleep remaining until we finish the trail. Things can get confusing when we talk about time frames. We kept getting confused on how many days we had to hike until we finished. Was it two days and three nights to go, or three days and two nights? Earlier in the week we decided to count how many nights, or sleeps, until we were done. That is how Piñata and Straws talk to their four year old nephew. It is a great system. Sometime tomorrow I will become Master Yoda and complete my Triple Crown. Canada here I come!
“Most animals show themselves sparingly. The grizzly bear is six to eight hundred pounds of smugness. It has no need to hide. If it were a person, it would laugh loudly in quiet restaurants, boastfully wear the wrong clothes for special occasions, and probably play hockey.”
-Craig Childs