Before I give you the details of today let me back up and tell you what I’ve been up to for the last two days. After finishing the trail at the parking lot just stouthearted of the Canadian border we hitched back to East Glacier. We checked into a cheap motel run by the Blackfoot Indian tribe. We went across the street for dinner. I’ve been eating so much the last few days that I got a normal sized dinner and I couldn’t even finish it. After dinner I walked to the other side of town to buy cigarettes. I saw a few other hikers in the distance, but I didn’t recognize them. When I got back to the motel it was my turn for a shower. I stood under the hot water for ten minutes. It was the perfect way to get the chill out of my bones. Z and I went outside and found Slingshot and Clean Sweep. I haven’t seen them since I left Butte. They will finish in about four days. It was great to catch up with them. Straws, Piñata, Z, and I went across the street to get milkshakes and to get our clothes out of the dryer. While we were folding our clothes Enigma showed up. He had gotten ahead of us at Two Medicine and finished his Triple Crown the day before me. Congrats, Enigma. We all went back to the motel and chatted until late. Straws and Piñata had a nine thirty train to catch in the morning. They were up before Z and I and they let us sleep in while they got breakfast. We woke up just as they got back to the room. Slingshot and Clean Sweep joined them and we let them use our shower. Eventually it was time to say good bye. I really enjoyed hiking with Straws and Piñata over the last month and almost nine hundred miles. Congrats on finishing your Triple Crown! Z and I went for breakfast after the Hammonds left. I had a huckleberry stuffed french toast and it was delicious. Z went to go run some errands and check out the other side of town. I killed time at the coffee shop and the lodge. About two hours before my train left I went to the other side of town where the Amtrak station is located. I bought some food to take into the train. While I was waiting for my food I ran into Honey Buns, Knock on Wood, and DG. I haven’t seen them since Monarch Pass in Colorado. I hiked on the AT with Knock and Honey Buns. They will finish their Triple Crown in a few days. Congrats guys! 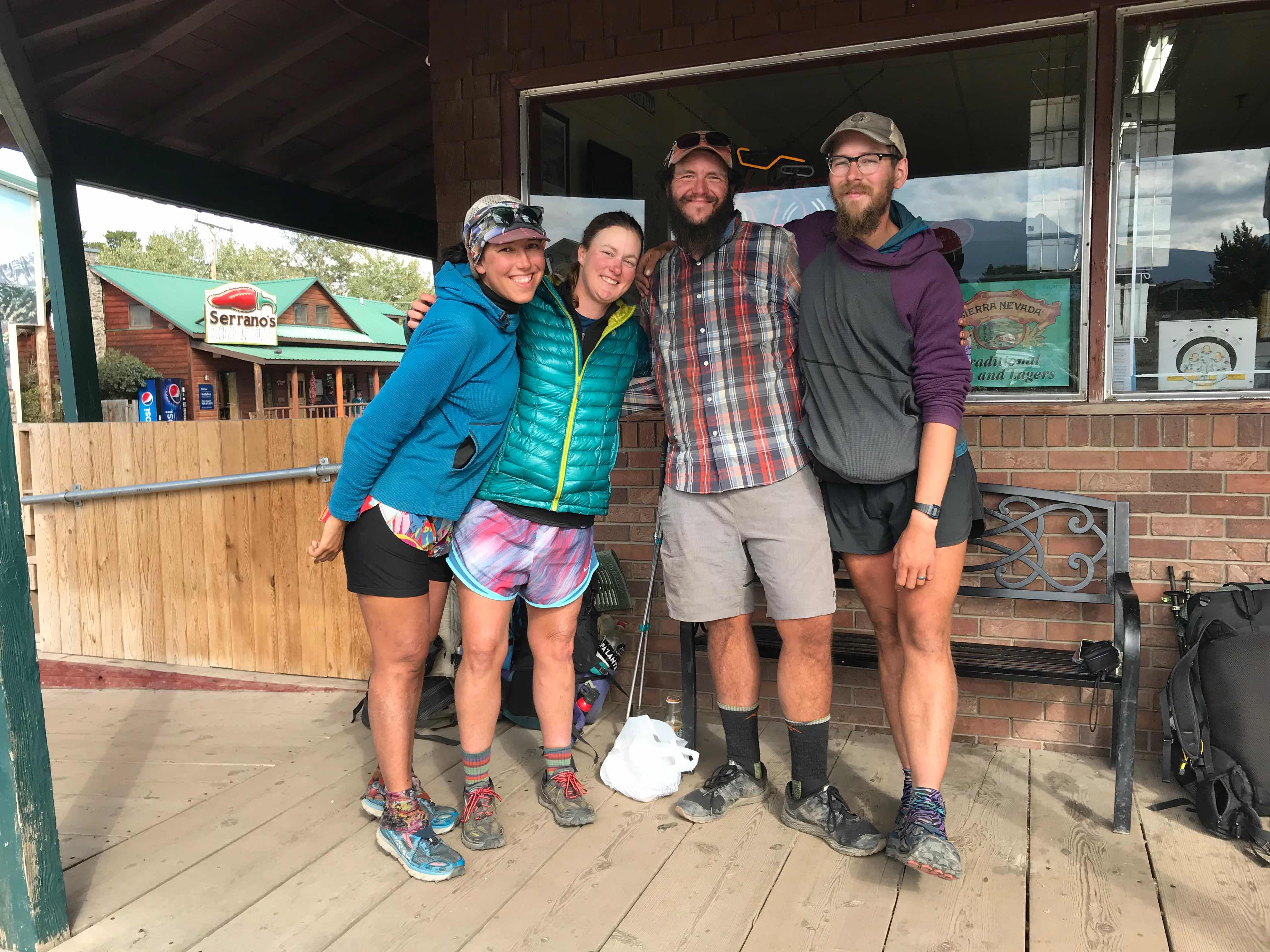 Honey Buns, me, DG, and Knock on Wood
Eventually it was time to catch my train. Z and I had the same train to Spokane. I also had a flight from Spokane to Denver the next day. The train didn’t get into to Spokane until 2:30 am. I wasn’t sure how I was going to kill so much time before my flight so early in the morning. Z said the area around the train station was super sketchy, so we got a hotel. Neither of us got much sleep in the train so it was nice to have a hotel room to nap in. We got to the hotel with no problems and slept until ten o’clock. We got up and walked a few blocks to a local coffee shop. I love the coffee shops in Washington. After breakfast I caught an Uber to the airport. It was sad saying goodbye to Z. He has yet to hike the AT, but I’m hoping that one day he will. My flight to Denver was anticlimactic. I was just happy that my pack made it through security and I didn’t have to check it. My entire life is in that backpack. I don’t like letting it out of my sight. 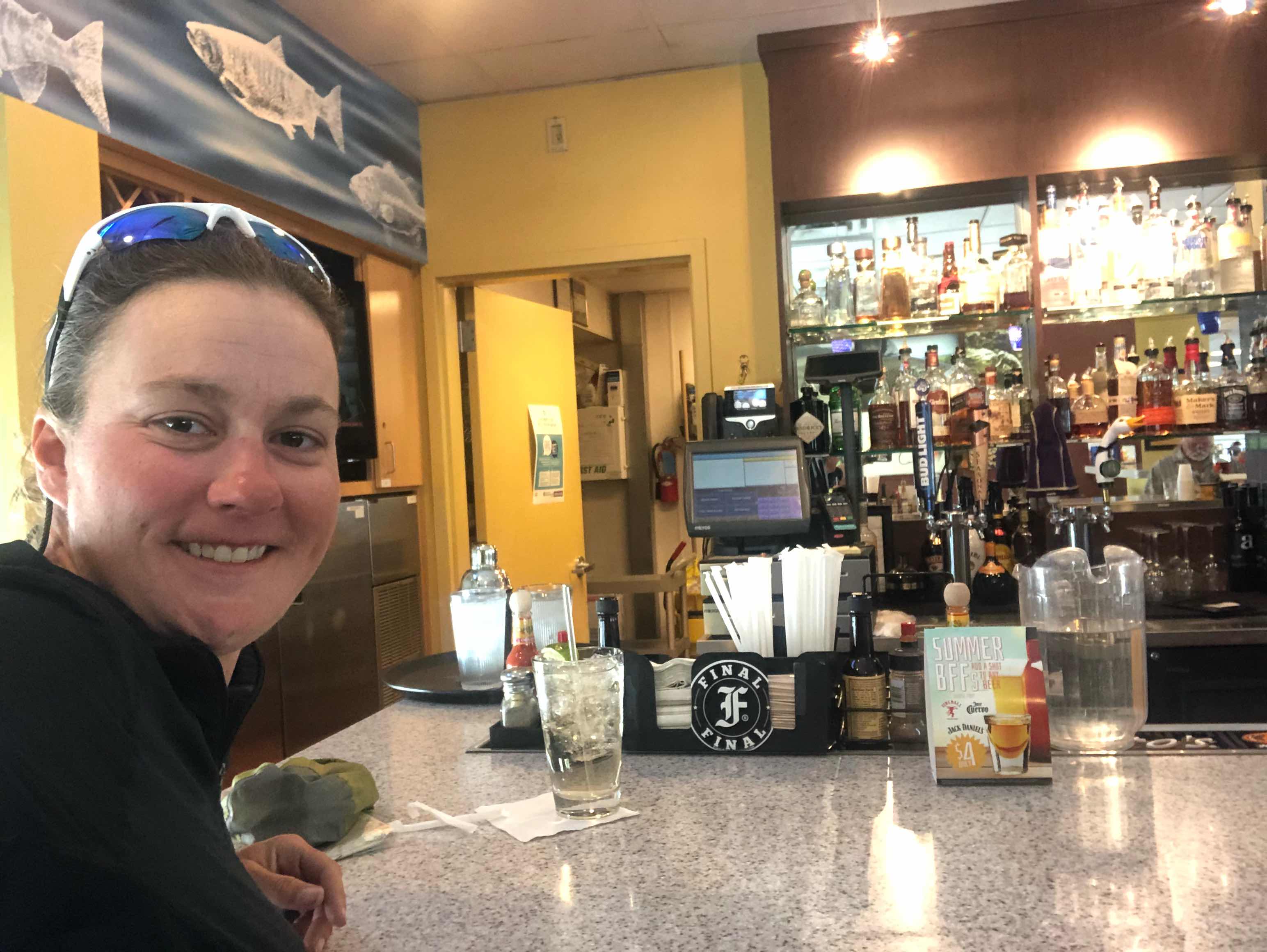 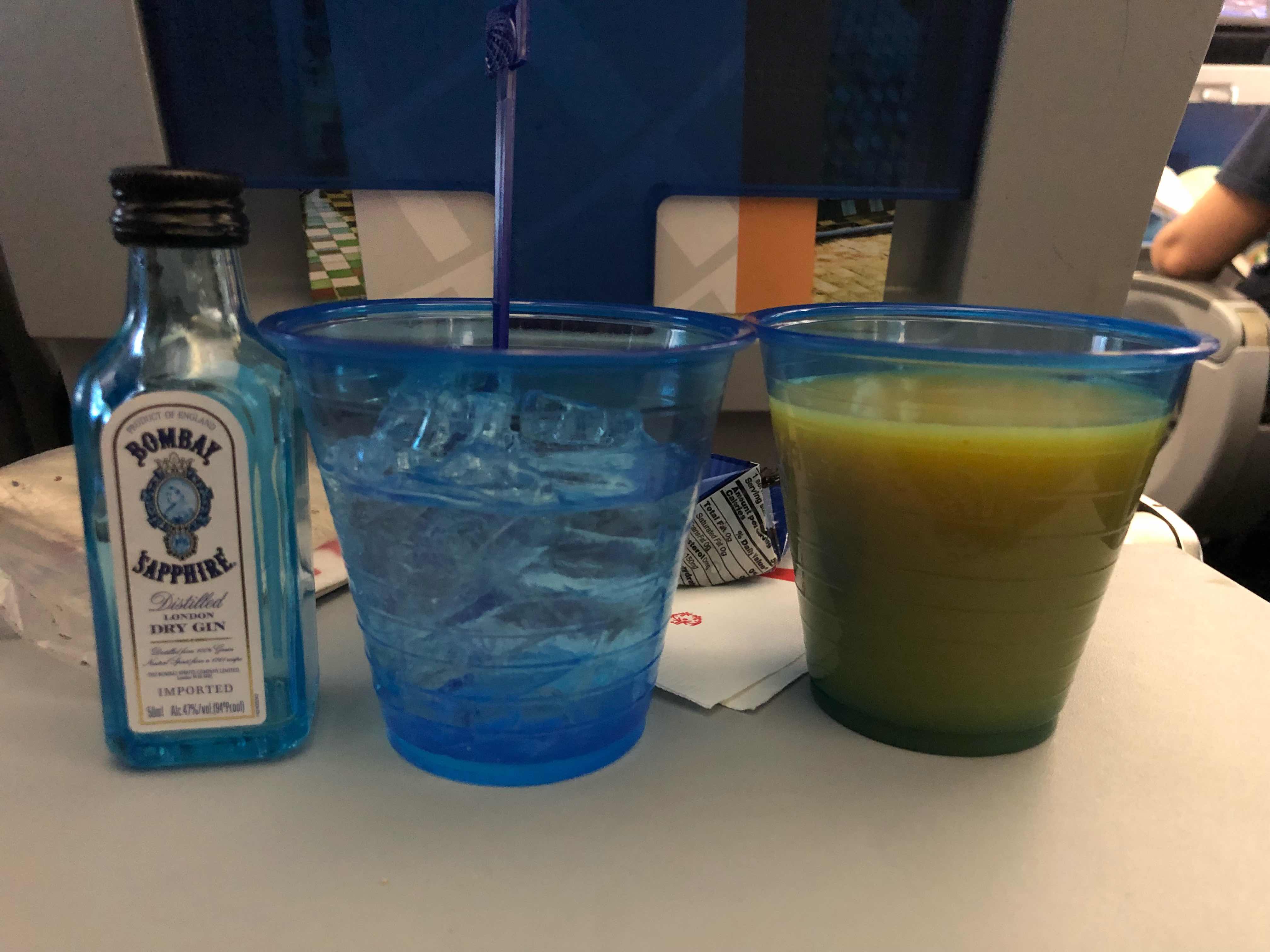 Traditional gin and OJ on the plane
Once I arrived in Denver I caught a free shuttle to my hotel in Aurora. I stayed at the Radisson which is the nicest cheap hotel I’ve stayed in on trail. From my hotel I took an Uber to and from Walmart so I could resupply. By the time I repacked my food and planned the next hundred miles it was almost midnight. 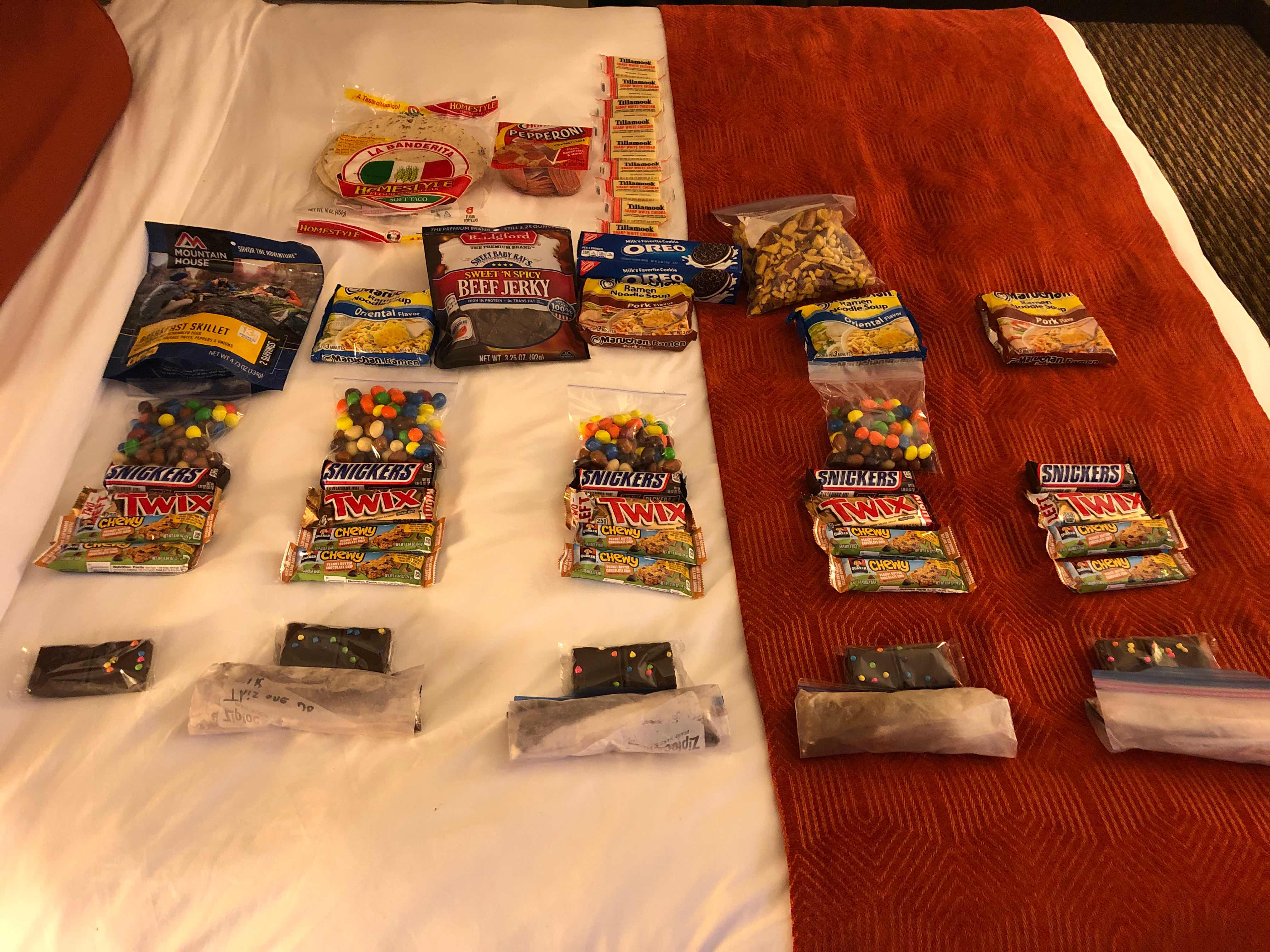 My Aunt Liz had arranged for her sister-in-law to give me a ride to Grand Lake to pick up my missing miles. I have only met Mary once and that was when I was ten years old. I was blown away by the generosity to drive an almost stranger 2.5 hours away. Mary was joined by her friend JoLynne. JoLynee reads my blog and gave me the info on how Indian Tribes shaped trees for different purposes. They picked me up at my hotel and took me all the way to Grand Lake. We had a wonderful conversation on the car ride and before I knew it I was in Grand Lake. Mary even bought me lunch and JoLynne gave me money towards a future lunch. Thanks ladies! I really enjoyed our time together. 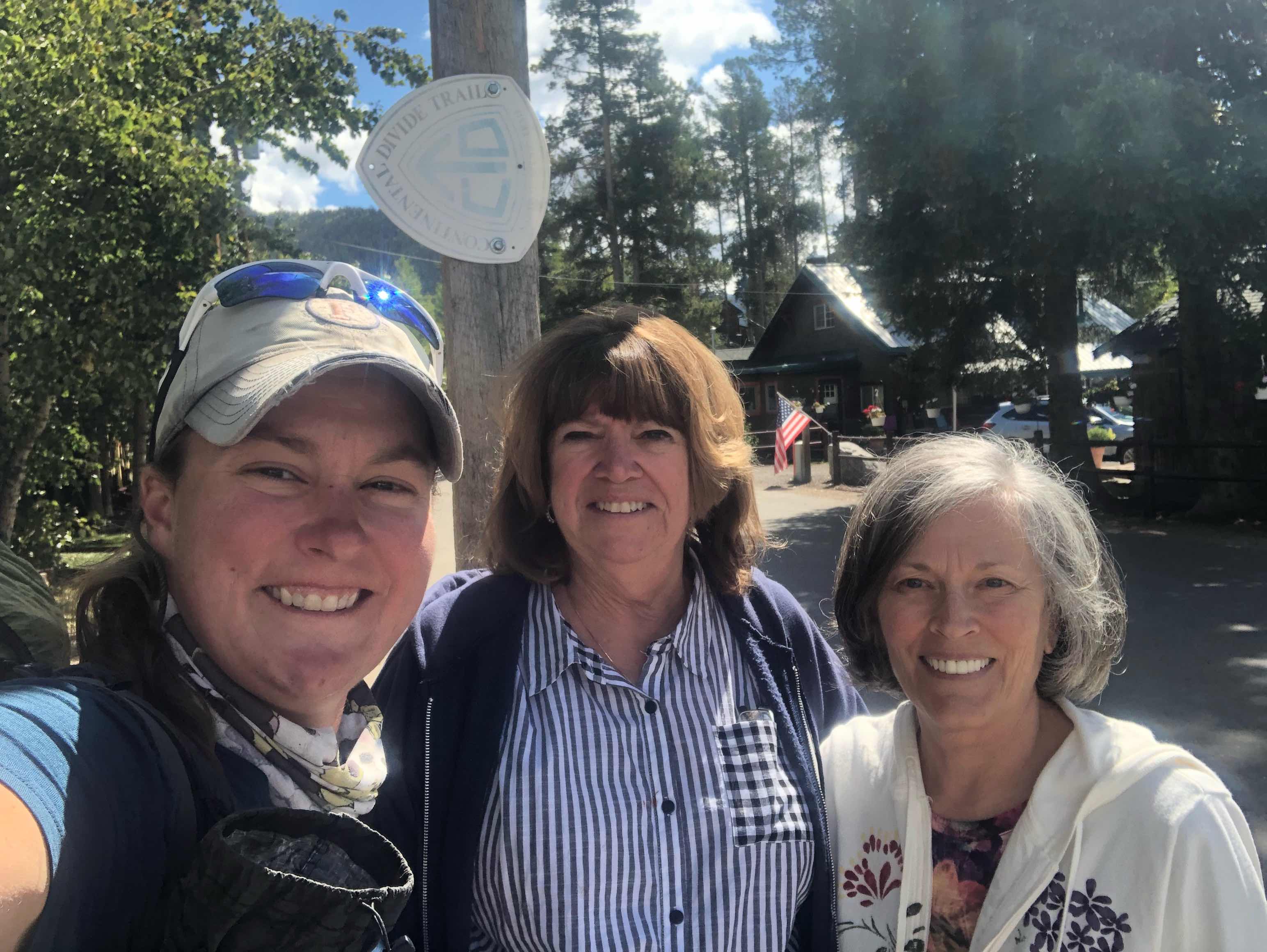 Me, Mary, and JoLynne next to the trail
I took full advantage of my last chance at cell reception. I called to check in with my mom. While we were talking I mentioned that I had changed my plans and was going to hitch to Monarch Lake and hike back into Grand Lake from there. Monarch Lake is where I officially got off of the trail after hurting my knee. It was 16 miles south of Grand Lake. When I got off the phone a lady appeared out of nowhere. She had overheard my conversation and offered to drive me to Monarch Lake. I couldn’t believe my luck. I explained that I needed to stop by the gear store before I left, I also forgot to buy a full canister. She said that would give her a chance to change out of her gardening clothes(apparently she was gardening nearby and that’s why I didn’t see her) and she would meet me at the gear store. True to her word ten minutes later she picked me up and we were on our way. Debbie is a retired school teacher and wishes to remain anonymous, so I didn’t get a picture. The drive to Monarch Lake was quick and I was hiking a little before one o’clock. Almost as soon as I got back on trail a nasty thunderstorm began. Within minutes I had to find cover from dime sized hail. Luckily, the hail didn’t last long. As I hiked back to Grand Lake the rain came and went. About six miles away from town I hiked over, under, and around blow downs. This lasted for close to five miles. It was very frustrating because I couldn’t get into a rhythm. 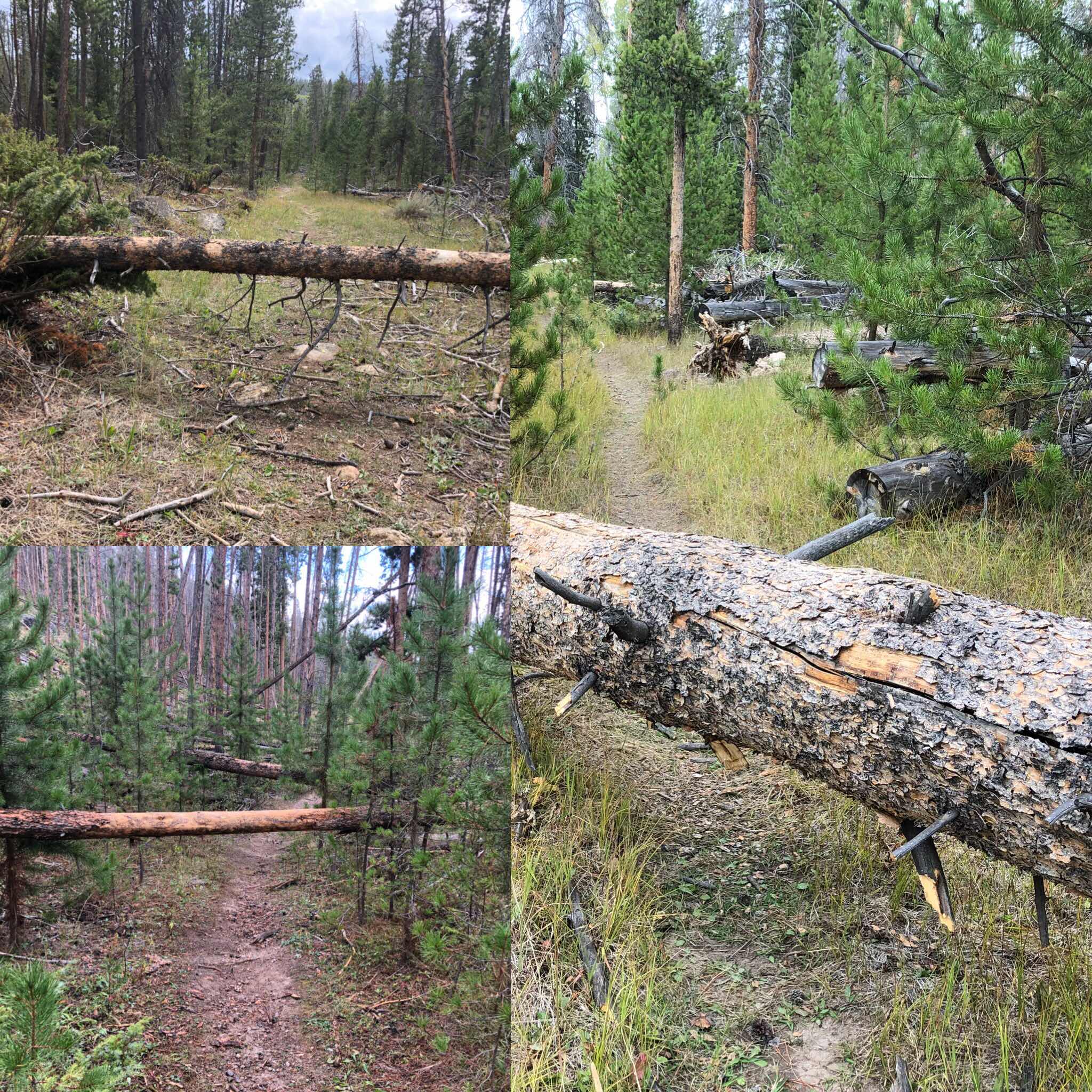 Small example of blow downs
I crossed the boundary into Rocky Mountain National Park and I also hit 2,700 miles. It was a milestone kind of day. RMNP is the third National Park I’ve hiked in on this trail. I wish the trail spent more miles in the park, but I’m only within its boundary for about twenty miles. 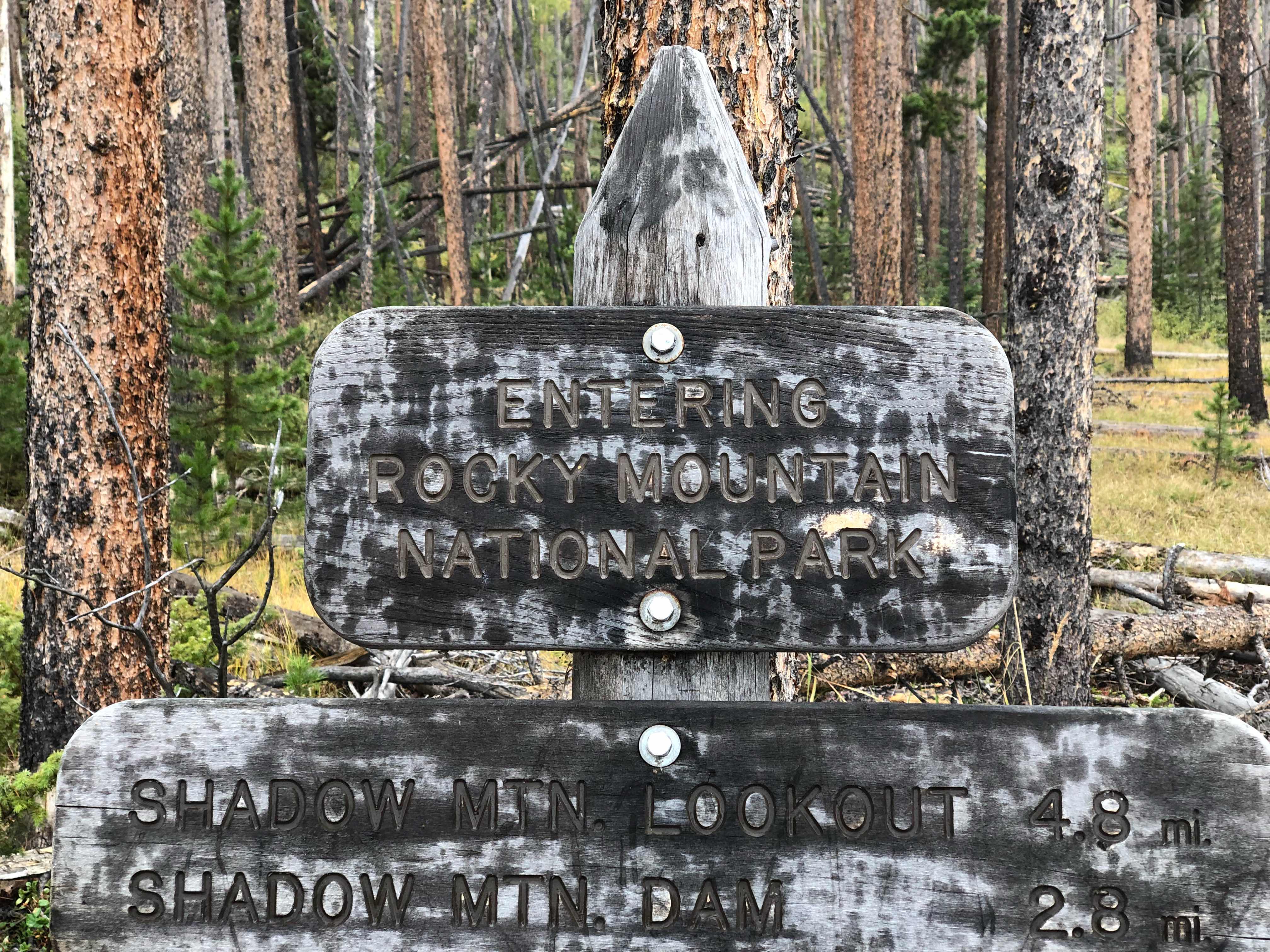 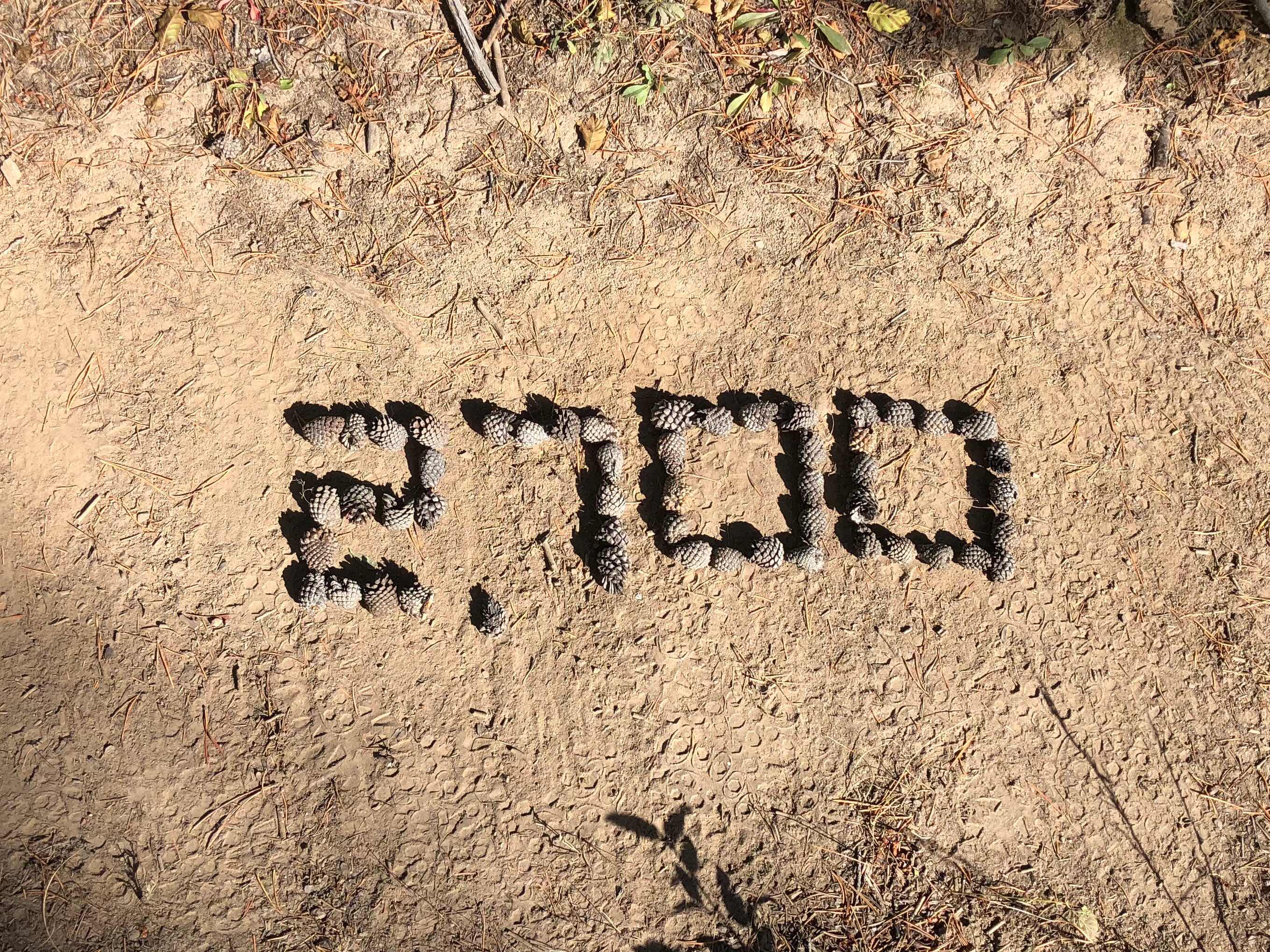 2,700 miles complete
On my way back into Grand Lake I could see that fall has already begun here. I’m also going to spend the next hundred miles at a much higher elevation than I’ve grown accustomed to. I don’t think I’ve been above eight thousand feet for a long time. Most of Montana was below seven thousand feet. I could really feel the elevation today. 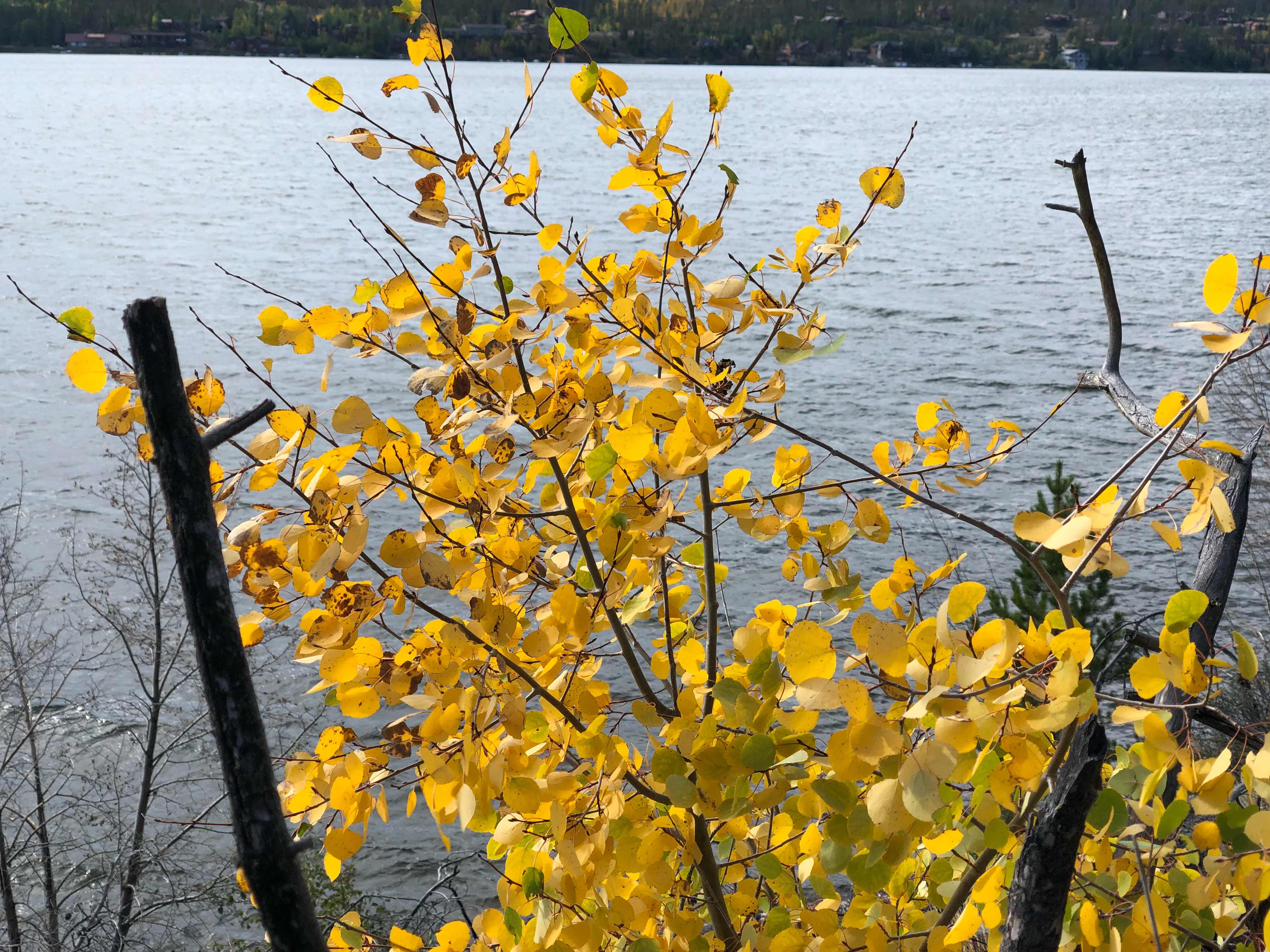 Fall beginning to show her colors 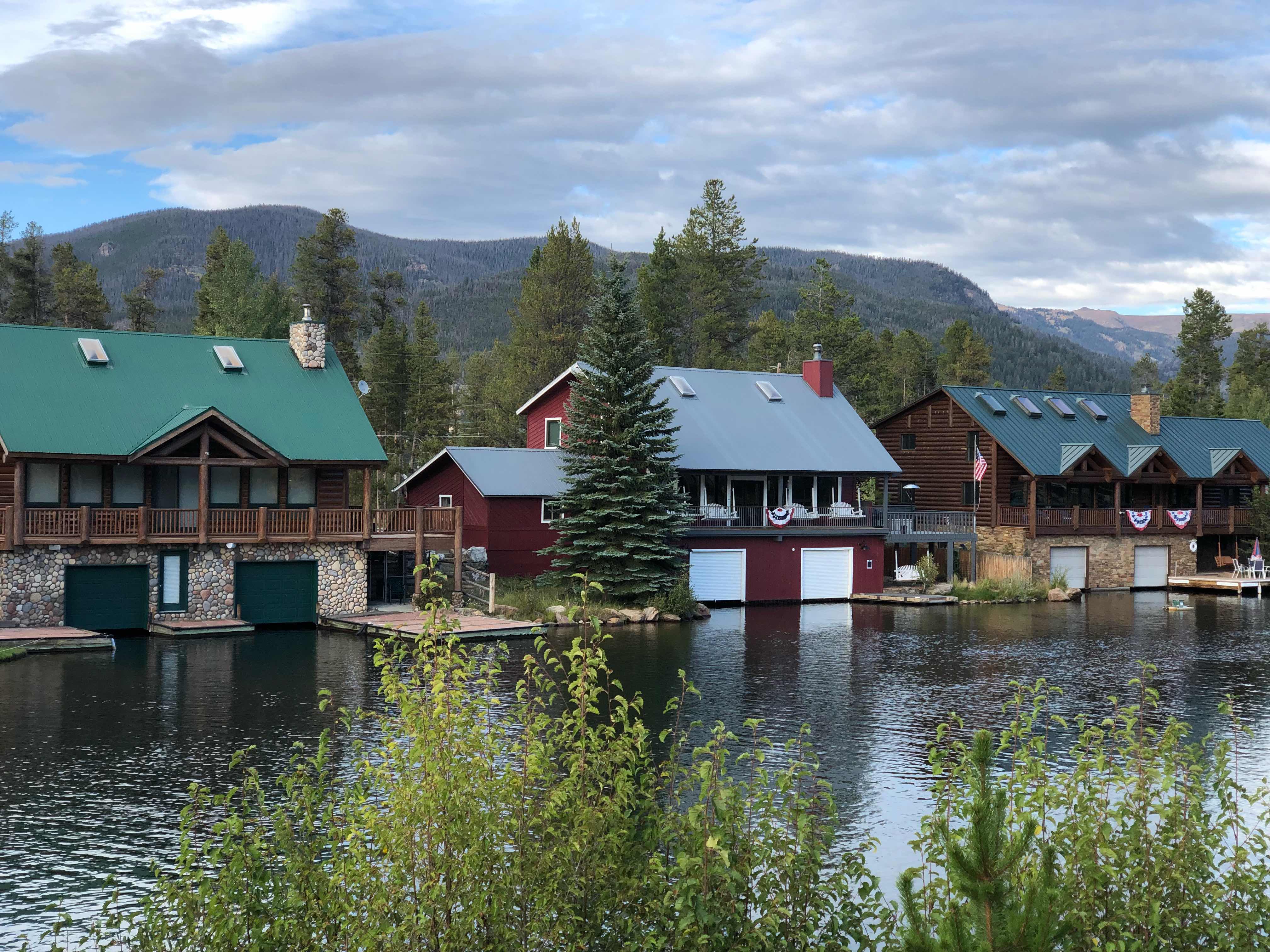 Garage doors for boats
I got a quick bite to eat at a local pizza store. The pizza was really good. The last few days of traveling left me exhausted. I booked a bunk at the same hostel I stayed in last time I was here. I was sound asleep by nine o’clock. I had fallen asleep while writing my blog, yet again. Too bad I didn’t stay asleep. I tossed and turned for most of the night. I think the elevation and dehydration was to blame for my restlessness. I had planned on getting up early so I could hit the ground running, but that wasn’t the way things went. 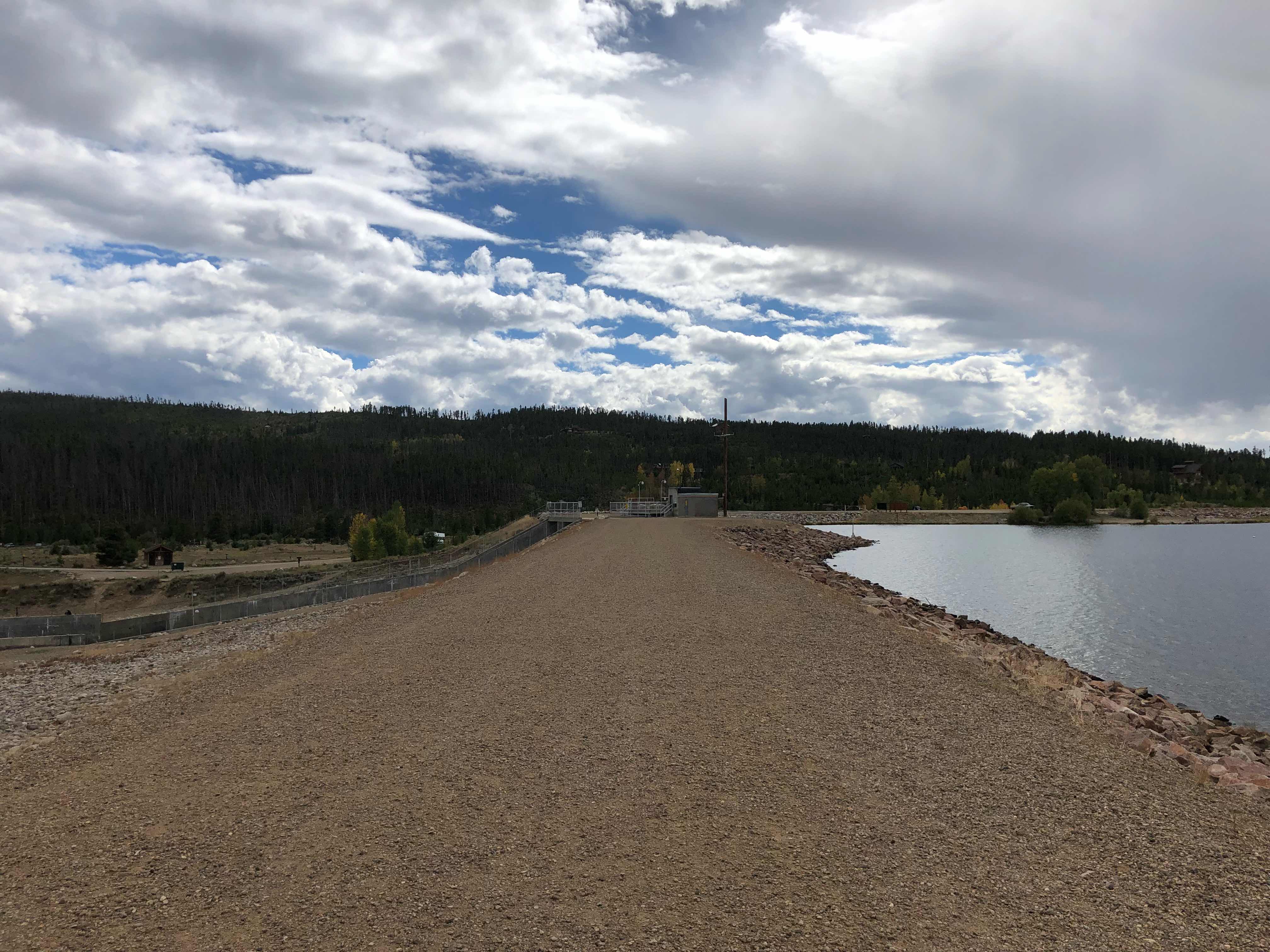 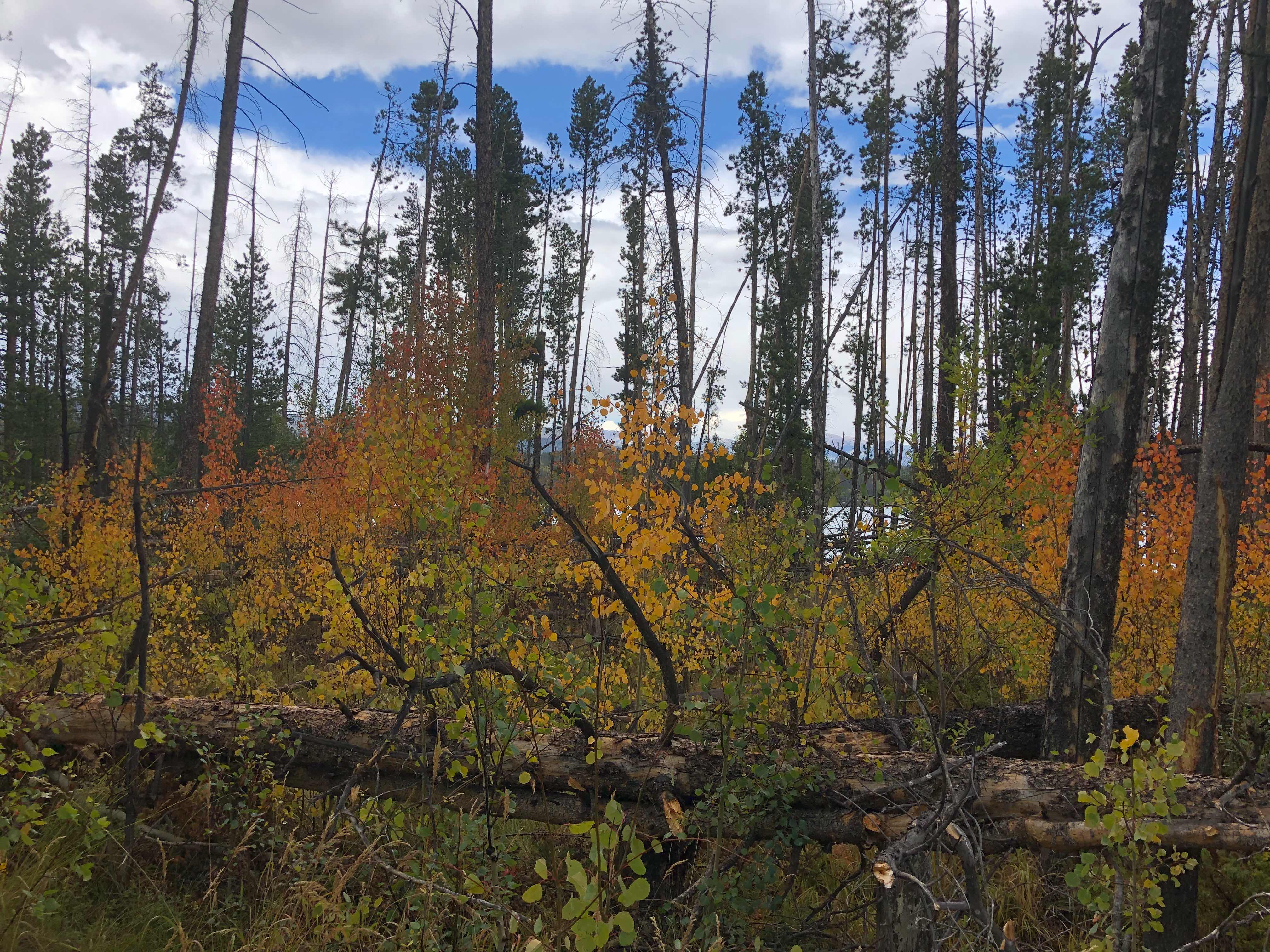 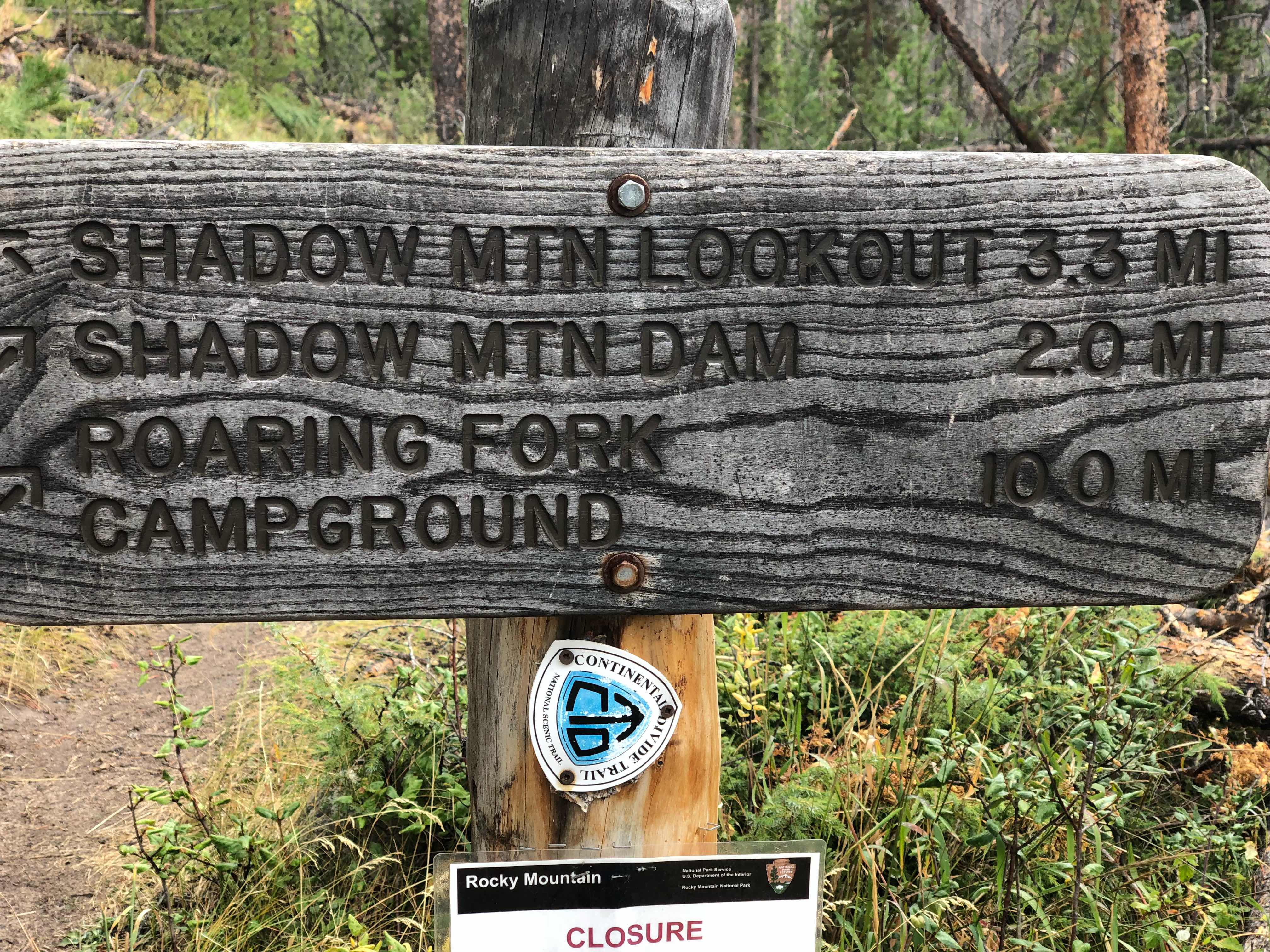 Proper use of a CDT blaze to indicate direction of travel 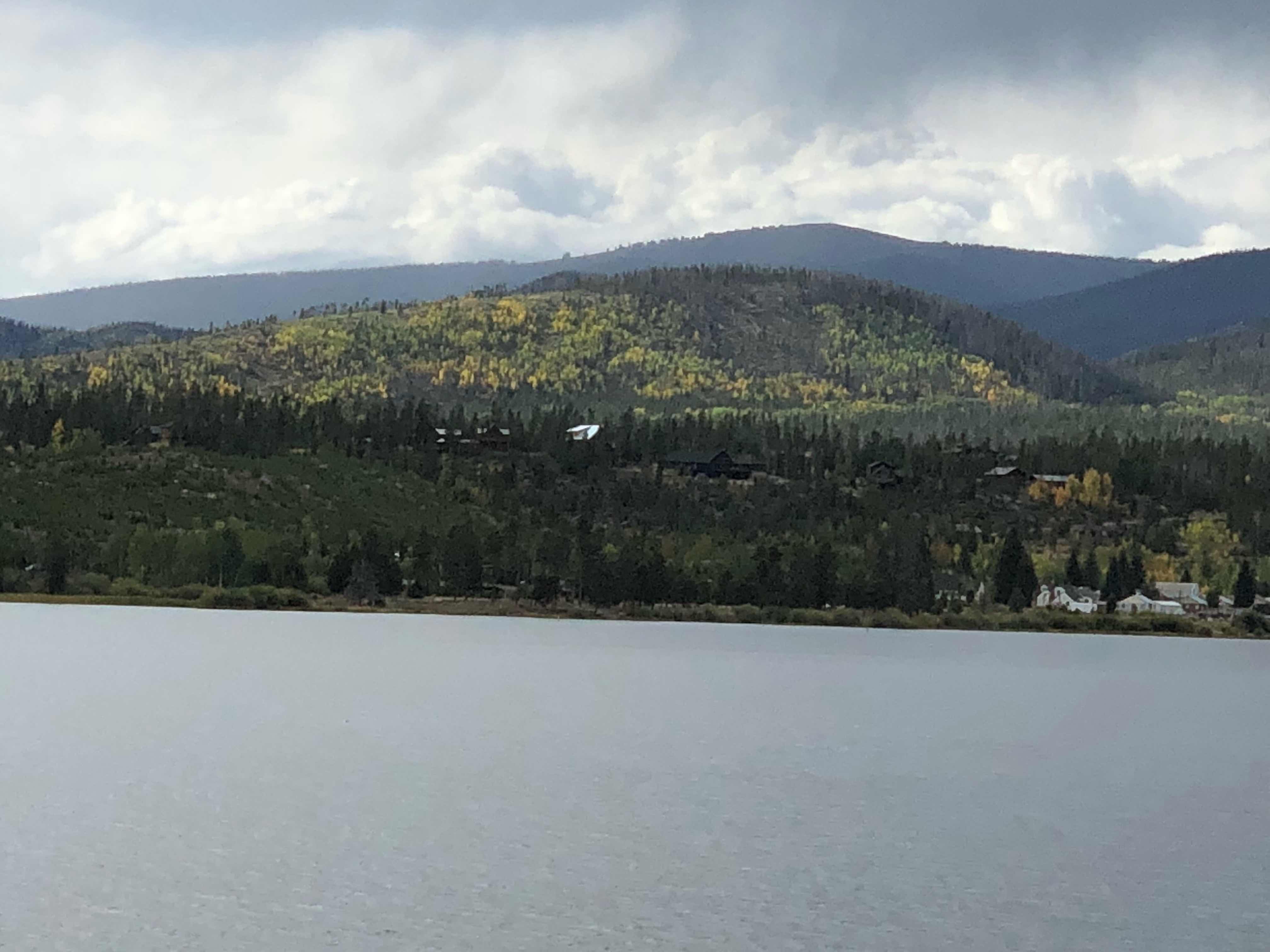 Colors changing in the mountains next to Lake Granby
“Hope is like the sun, which, as we journey toward it, casts the shadow of our burden behind us.”
- Samuel Smiles