Last night was interesting to say the least. I had just settled down to sleep when I heard a rustling sound coming from my backpack, which was just outside of my tent. At first I thought it was a bear, but that didn’t sound right. I was half asleep, but when I figured it out I jumped up. I just knew it was a mouse trying to get into my hip belt where my snacks were stored. I grabbed my headlamp and shined some light onto my pack. Sure enough I saw a mouse running away. The only thing I could really do was bring my pack into the tent with me. For several hours I would awaken to the sound of a persistent mouse trying to get into my tent. I didn’t get very much sleep. I was pleasantly surprised when I finally got up in the morning that it did not chew a hole in my tent trying to get to the food. It took me slightly longer than usual to pack up in the morning, partly because I was so tired and partly because my tent was still wet from the rain. 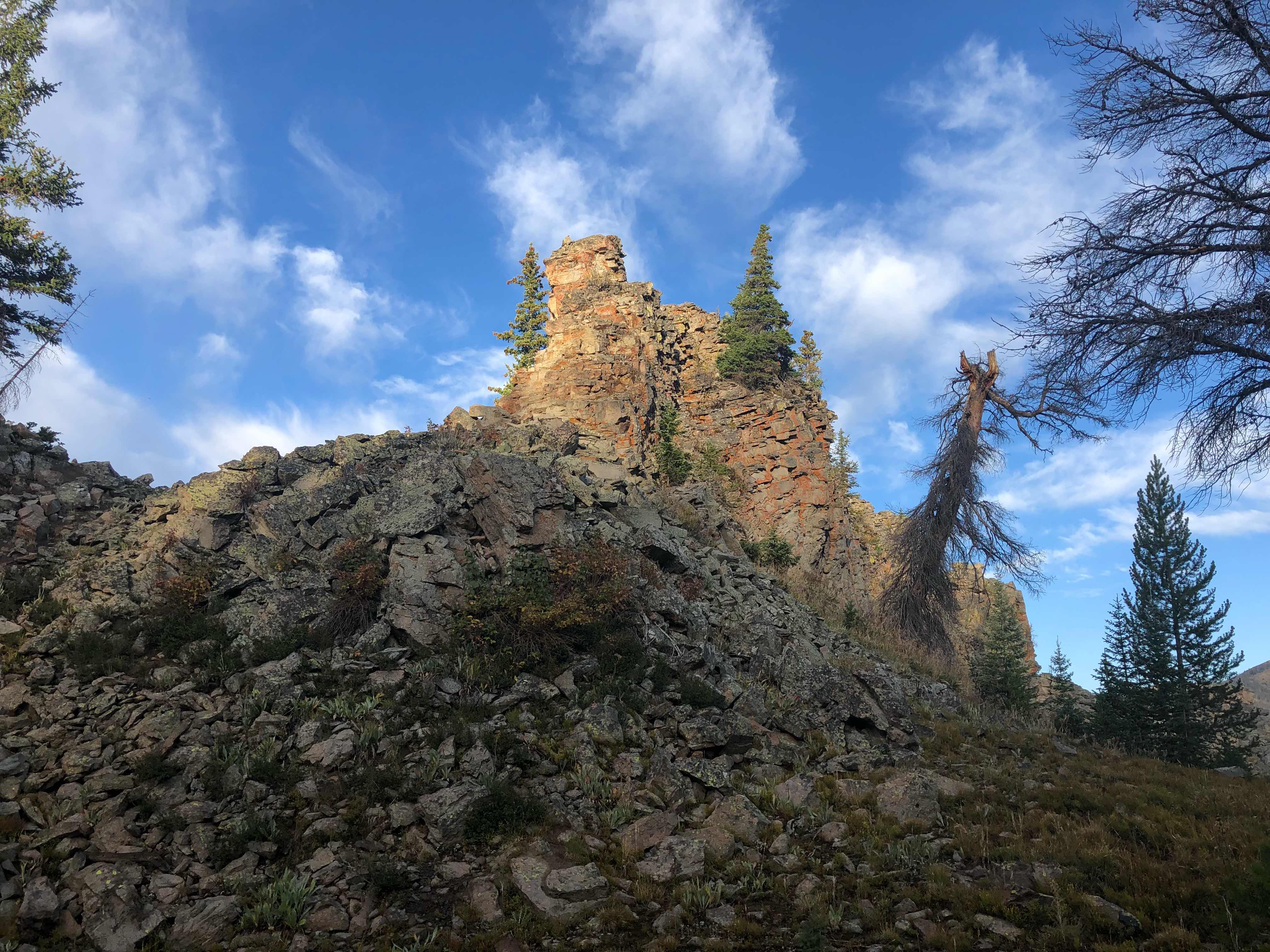 Cool rocky outcrop
I knew the first half of the day was going to be difficult. I was going to gain all of my daily elevation in those miles. I started off with a climb first thing out of camp. After that initial climb I just kept going up. I could see a big mountain in front of me and instinctively knew that I would go up it. 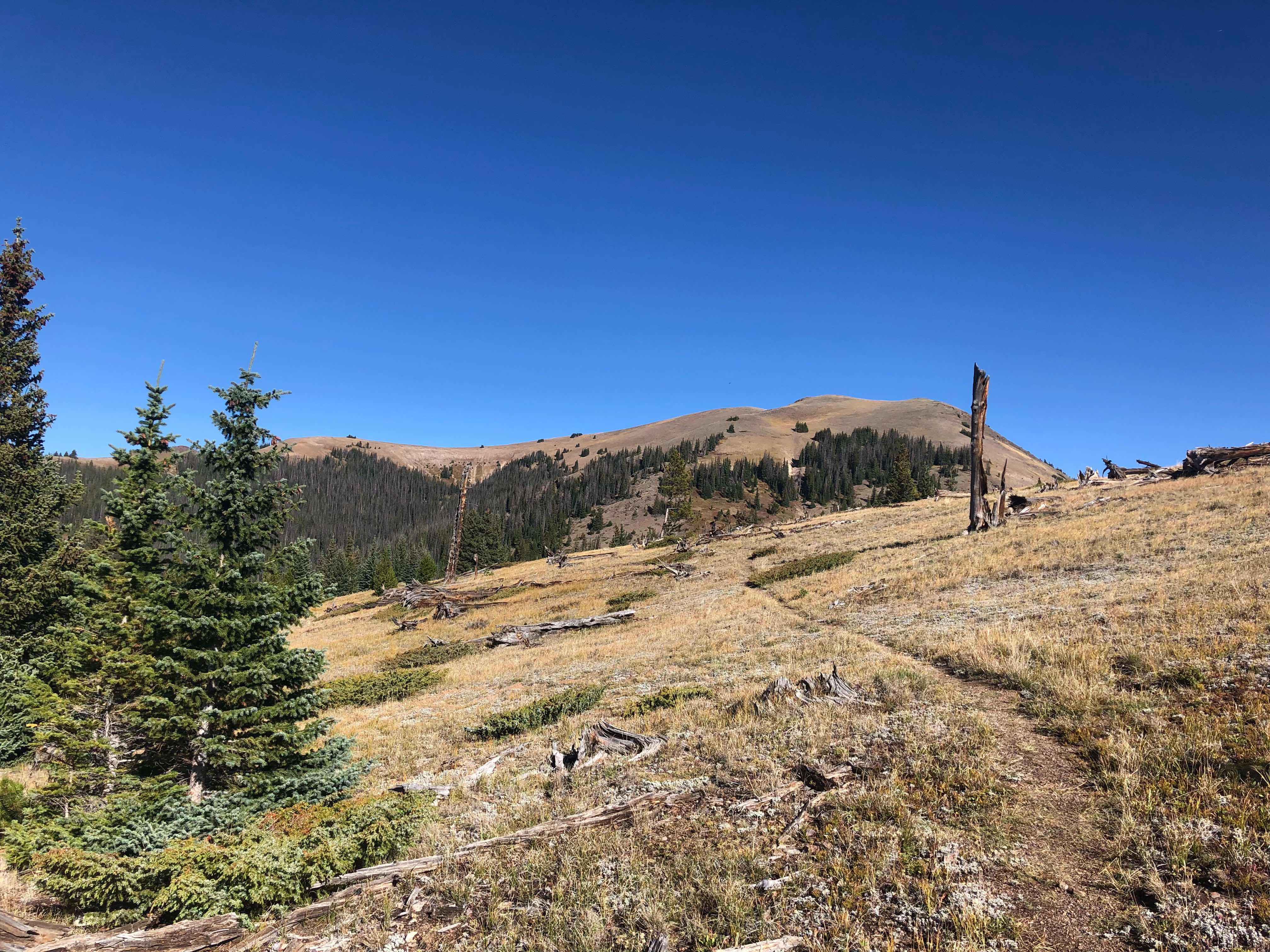 Getting ready to climb some more
I usually enjoy going uphill, but the elevation has been killing me. Also this section of trail has been ridiculously steep. I’ve grown accustomed to the tourist grade trails of Glacier NP. The not so nicely graded trails of Colorado were a distant memory. Most of what I’ve been doing the last few days have been over 700 feet/mile of elevation change. Glacier was about 350 feet/mile. I resigned myself to having a very slow morning. I have to hand it to Colorado, the terrain might be difficult, but the views sure are pretty. 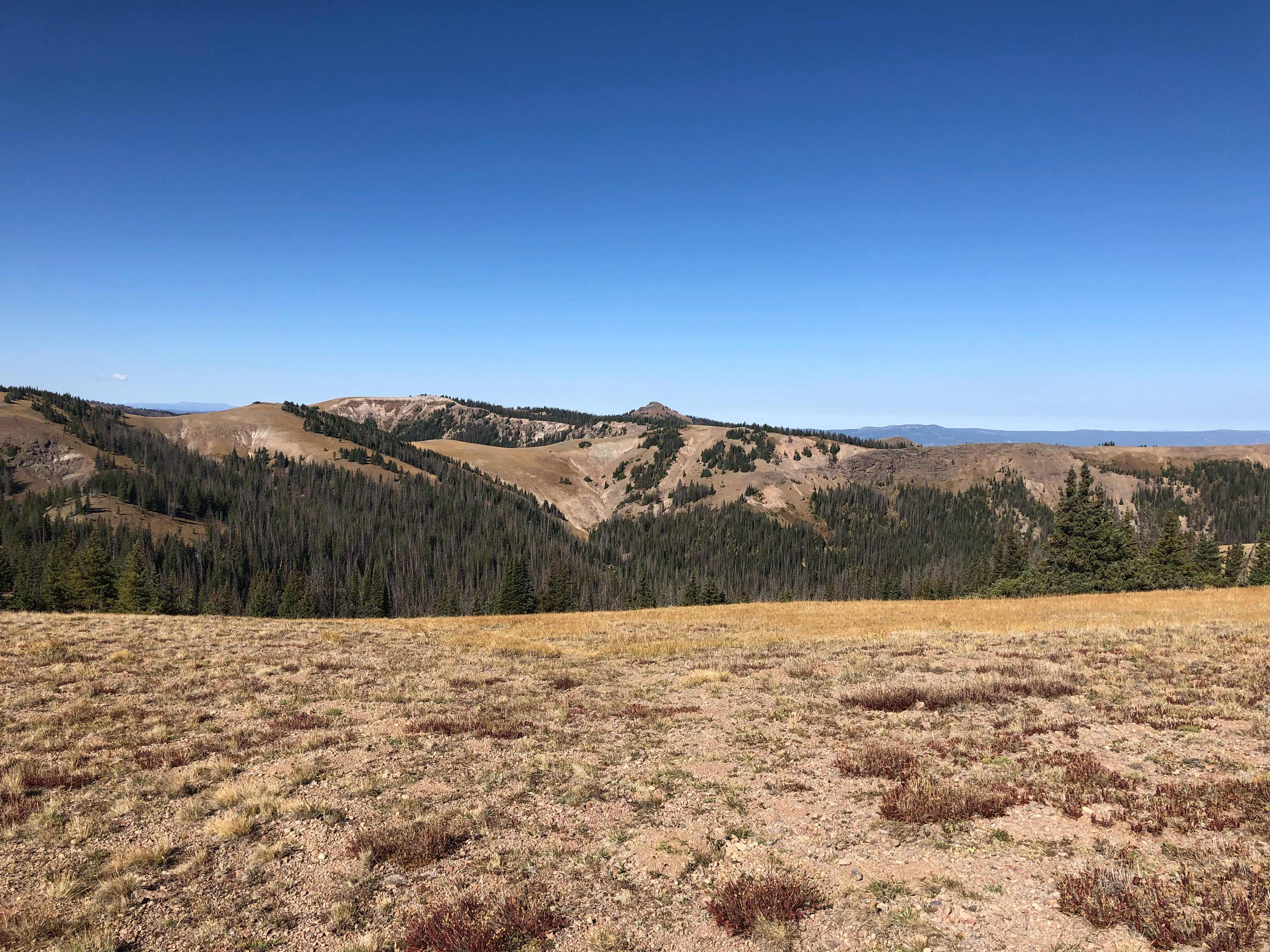 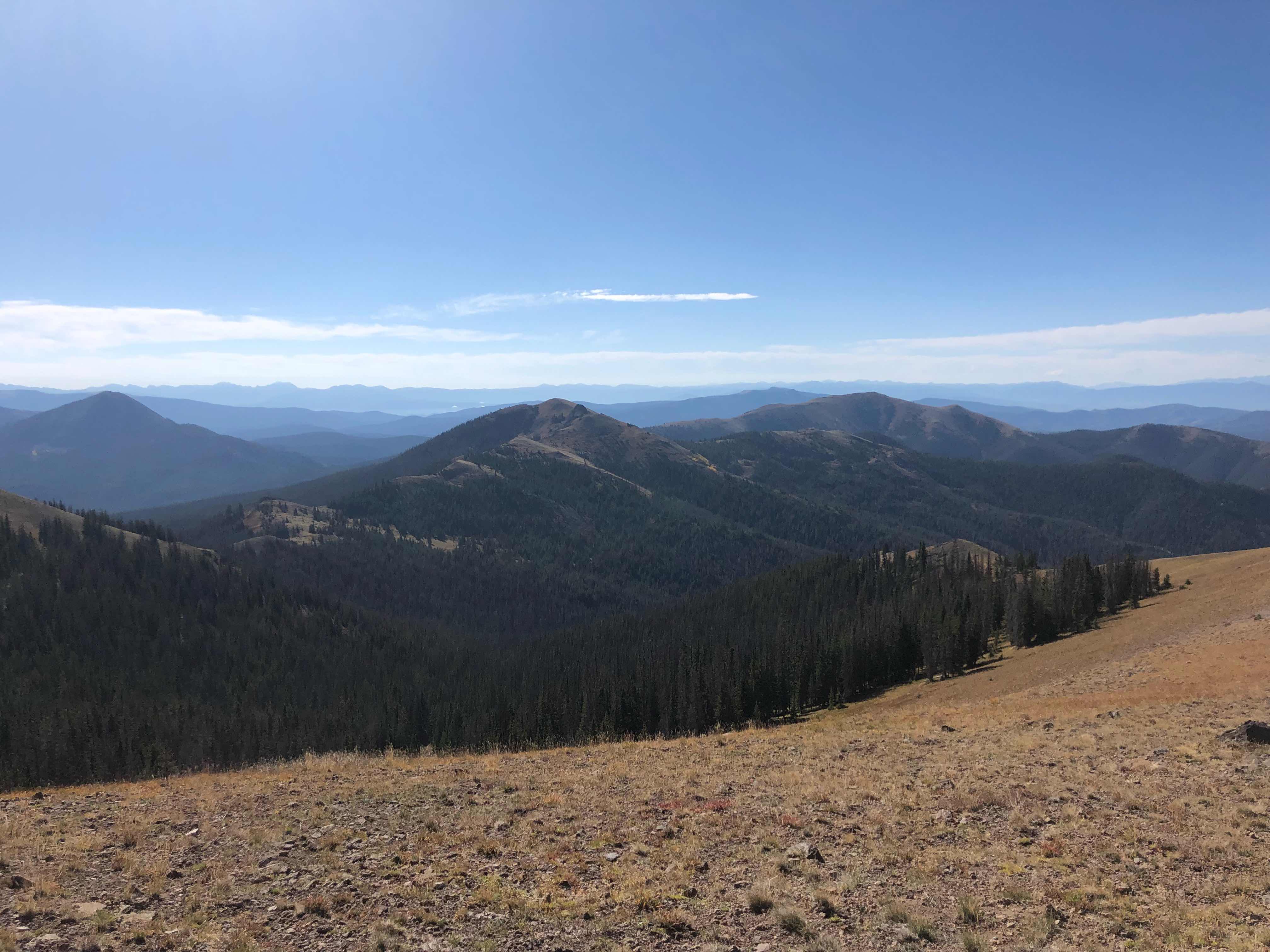 Clear skies
I saw a ton of hunters out and about. There are several different hunting seasons that are open right now. I met bow hunters, rifle hunters, and muzzle loading hunters. Elk, grouse, deer, and black bears all seem to be fair game right now. Everyone I came across seemed to be wearing an orange vest, I felt out of place and was glad that it isn’t open game on hikers. I also saw a few more SoBo’s this morning. I haven’t seen so many since just after Yellowstone NP. After hiking thirteen miles of steep ups, followed by short downs I finally gained my last ridge line. On the way up I passed by my last water source for awhile and of course it was dry. I was carrying enough water that I wasn’t really concerned. I passed by another SoBo who told me that the next water source was really gross. They had seen a cow taking a poop in it. I didn’t relish the thought of having to drink from that. The last seventeen miles of the day I spent hiking on a dirt road. The only good thing about that was all of the hunting camps I passed by. I was able to successfully yogi water from the people that I passed by. No cow poop water for me! 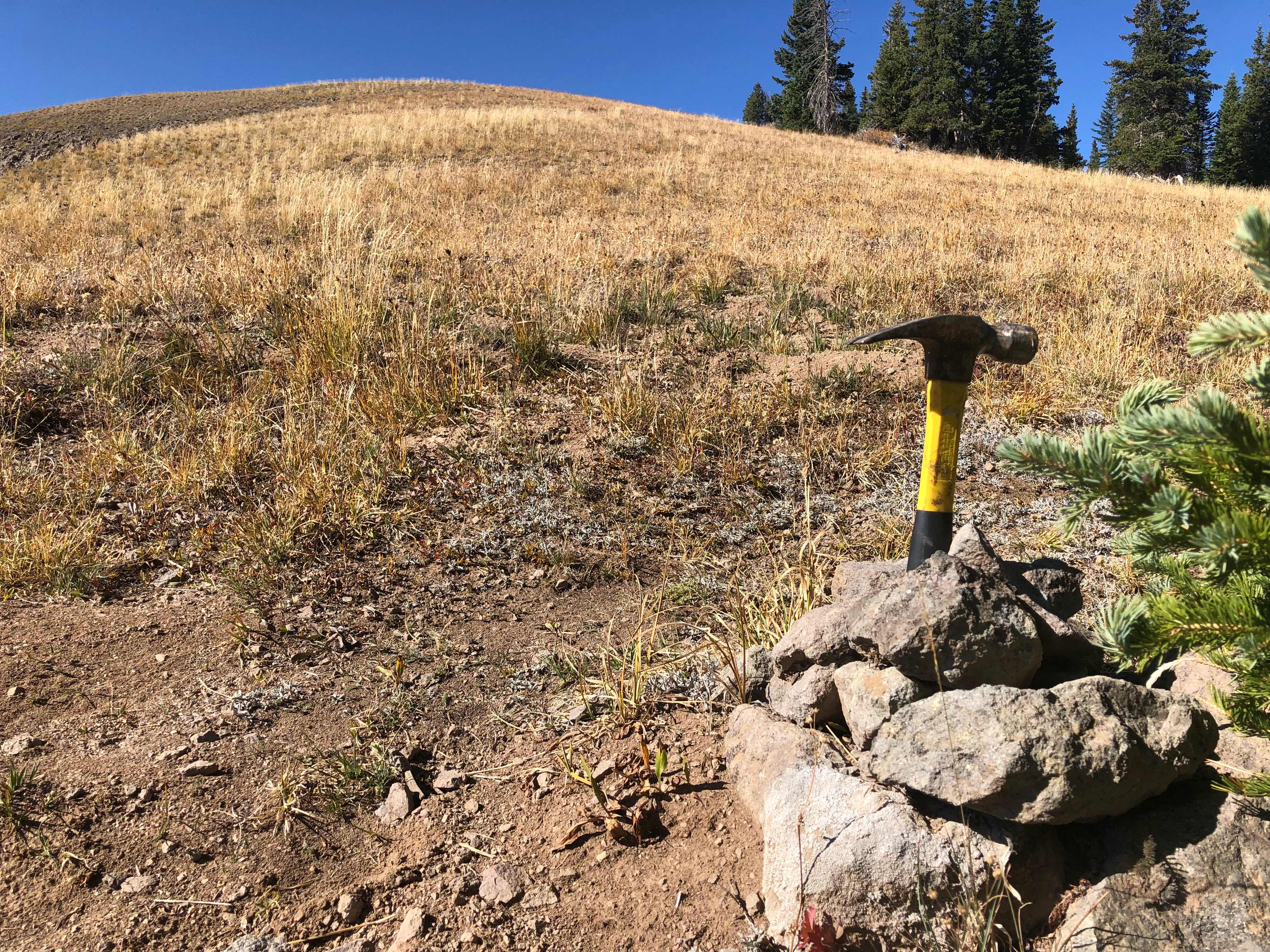 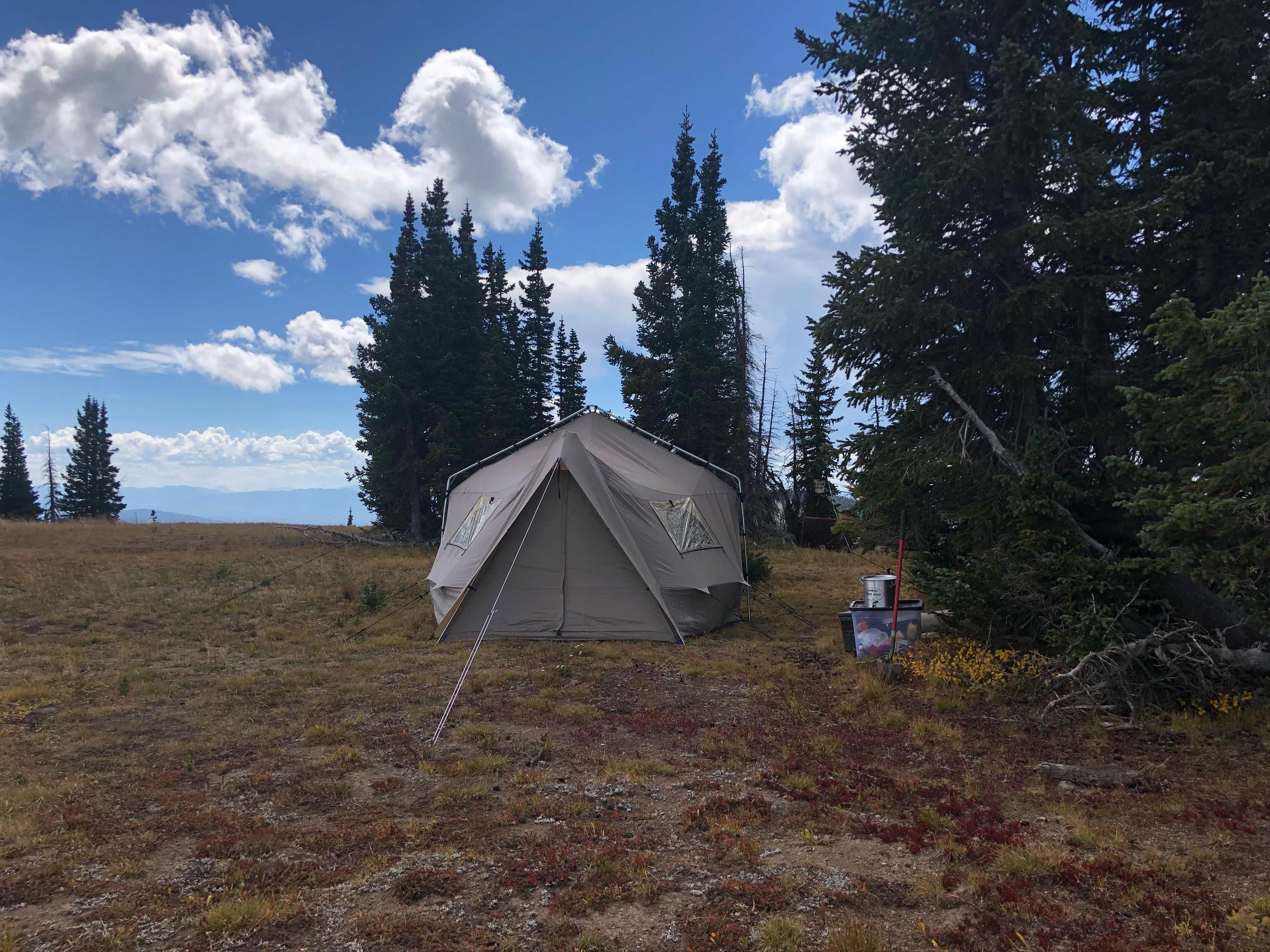 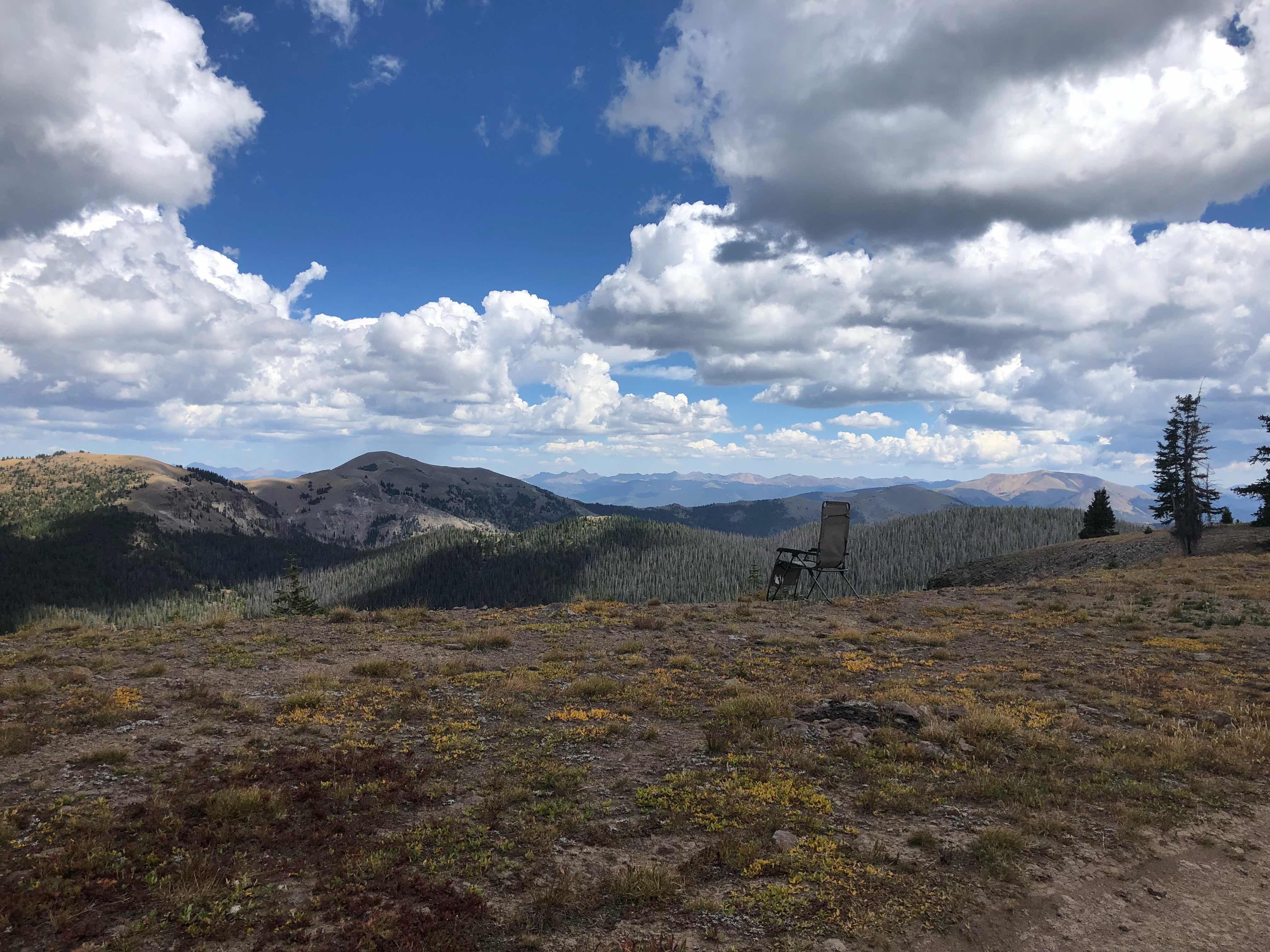 Somebody had a nice view and a comfy chair 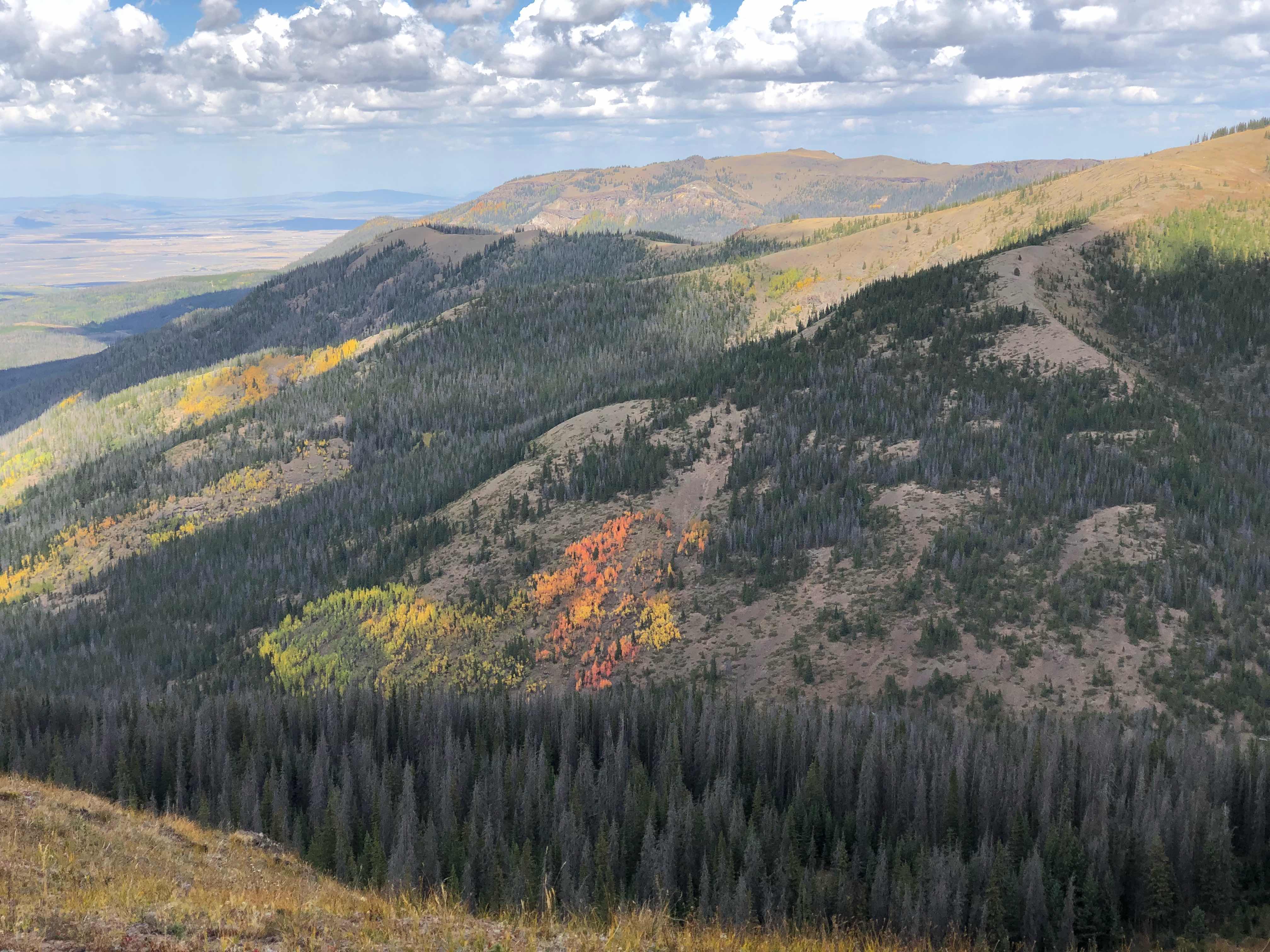 First red aspens that I’ve seen
The rest of the day was very uneventful. The miles went by quickly, but it was very boring. I hiked by an older couple who I saw yesterday. They are section hiking the trail. They have two cars strategically placed at trailheads. They leave one car and hike to the other car. They told me where they had a car parked nine miles ahead. They had left a gallon of water next to it. The car was perfectly placed where I wanted to end my day. That water would save me from having to drink cow poop water. Today was really like a highlight reel of the Continental Divide Trail. I hiked up steep ridges, complete with strong wind, I crawled under a barbed wire fence, lost the trail several times, witnessed a cow pooping in a water source, walked on a dirt road, saw a well blazed trail that was not the cdt, and camped in sagebrush next to a busy highway. I think that sums up this trail nicely. Tomorrow I even get to walk my last thirteen miles on a paved, busy highway, with little to no shoulder. 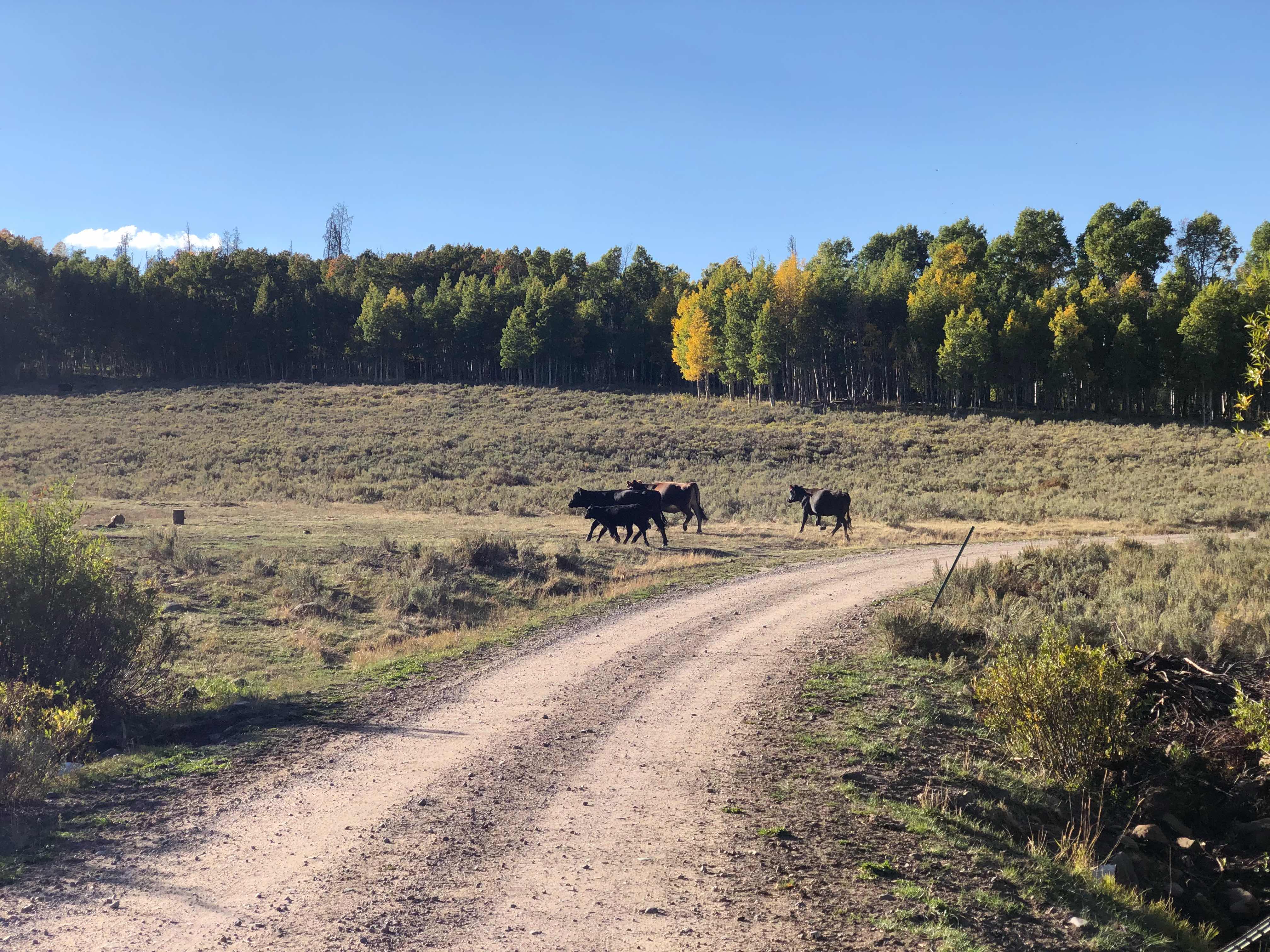 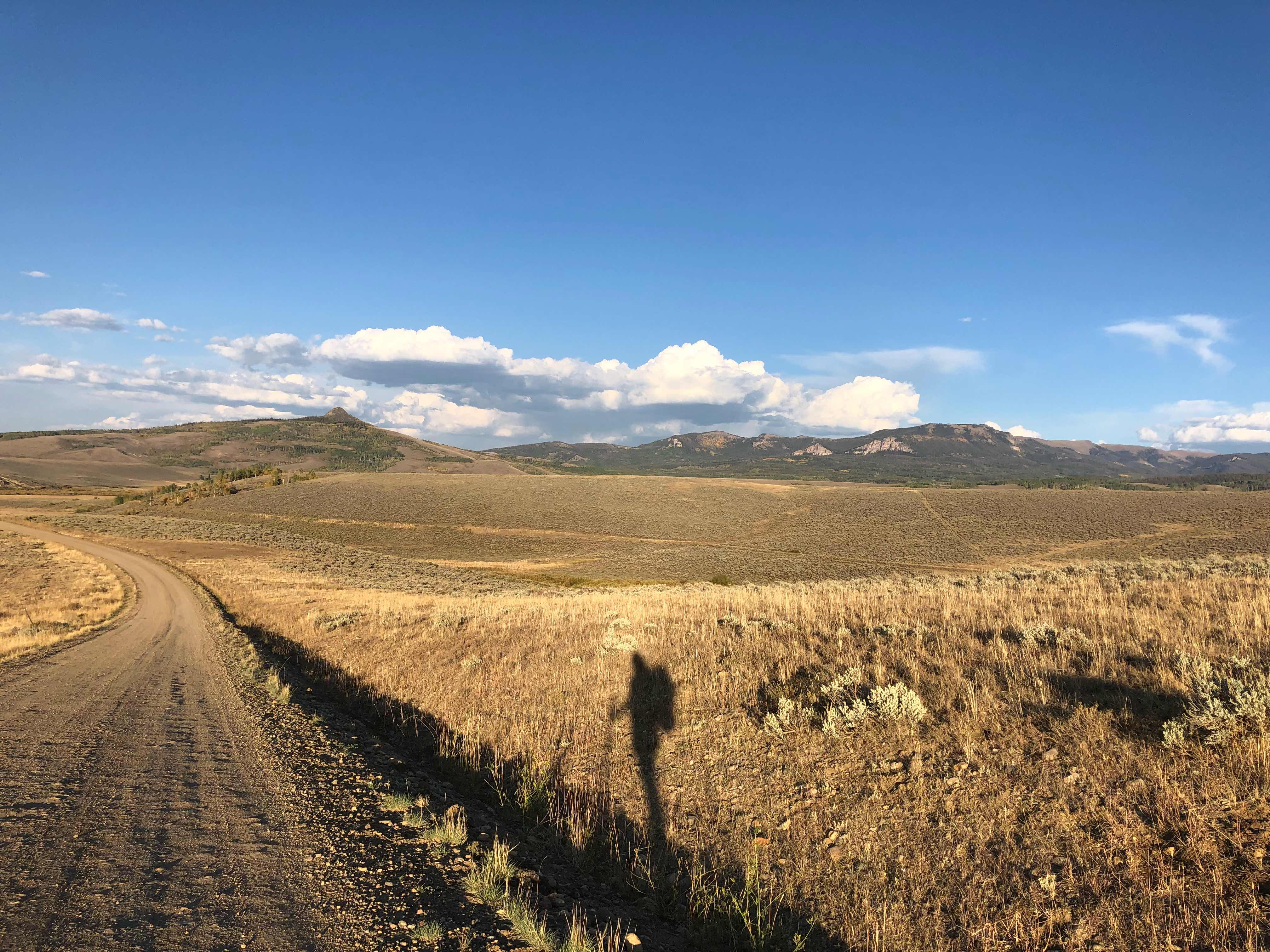 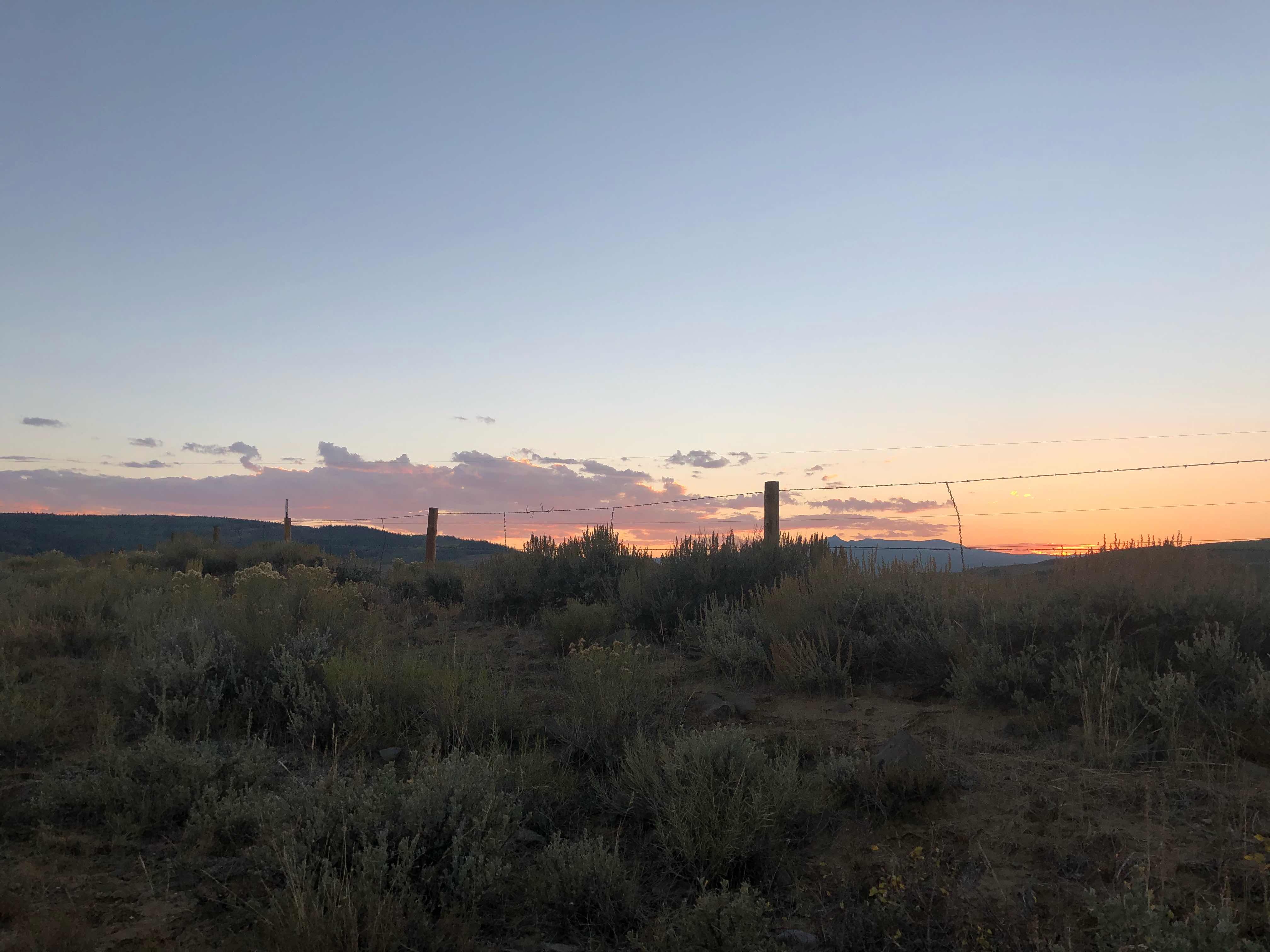 Last sunset on the Cowtinental Divide Trail
“Do the right thing. It will gratify some people and astonish the rest.”
- Mark Twain