Cold Spring Shelter(125.6) to Nantahala Outdoor Center, NOC(137.3) 11.7
Today was a million times better than yesterday. I stayed very warm last night, even with the rain. I also slept through the night. I woke up around 6:30 and it was raining. I didn't really mind though, I stayed in my hammock until 8:30. It was nice to sleep in and listen to the rain against my tarp. When it finally stopped raining, I started to pack up. I noticed a small tear in my hammock. I guess I set up too close to the ground and a stick or rock tore the fabric. I tried not to get too angry with myself. I used some tenacious tape to patch it and it seems to be holding up. I also discovered a hole in one of my shoes. Since I bought them through REI, I wasn't too concerned. They have an awesome replacement policy and I have a new pair being delivered to me at Fontana Dam. Thanks, Anthony, for helping me out with this. Today's trek was a perfect mix of 6 miles uphill and 6 miles straight downhill. 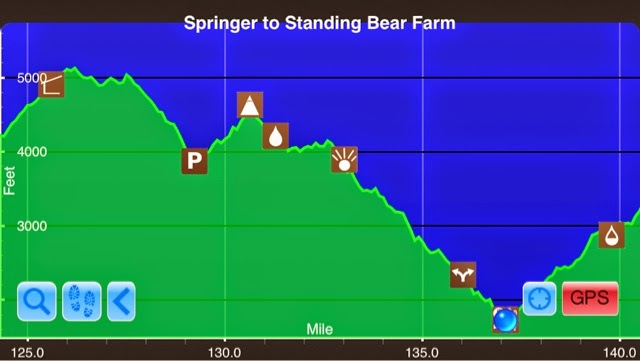 Guthook App shows my elevation change for the day. Awesome app
I was supposed to have a fantastic view from the top of Wesser bald, but with the rain and fog I was greeted with this instead 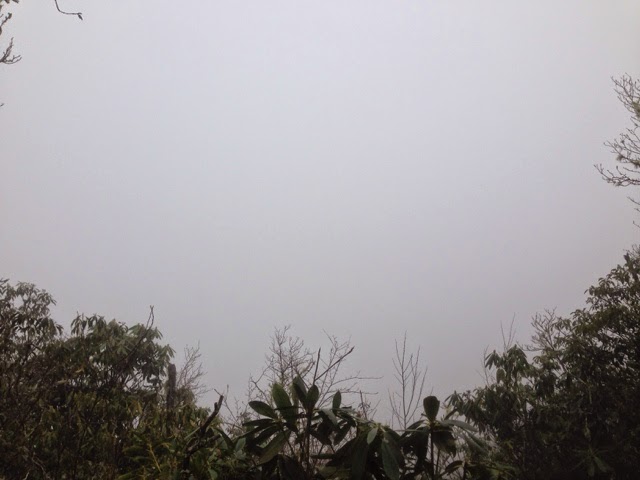 Just use your imagination
I am constantly surprised at the lack of hygene by myself and other thru-hikers. I cooked ramen and tuna fish a few days ago. I tried my best to wash out my cooking pot, but I know there was still tuna fish in the pot. In the morning I made coffee in the same pot. I could have cared less that it had a slight tuna taste. In the real world this would completely gross me out, but on the trail I'm just happy to have a nice hot drink. This morning I dropped part of my pop tart on the ground, but I was still really hungry. I should probably be ashamed that I picked it up and ate it, but I'm not. 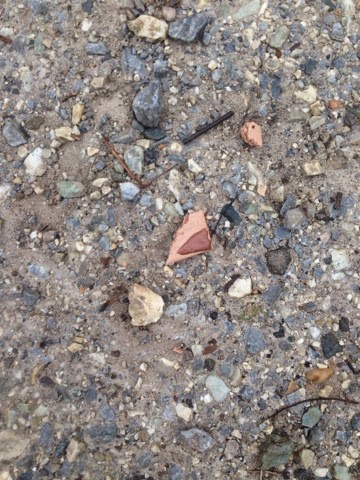 I ate it
The second part of the day was nothing but steep downhill madness. I usually relish the chance to run downhill, but not today. It was just too steep and sketchy. 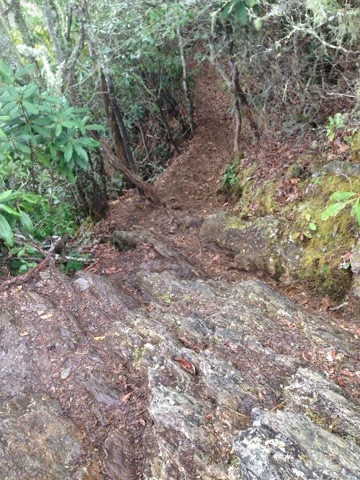 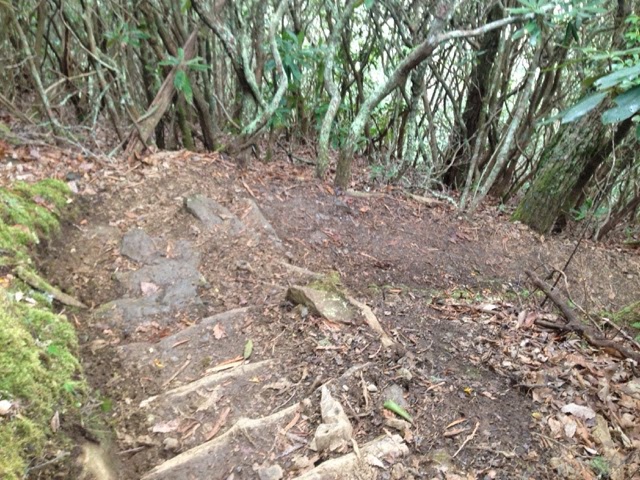 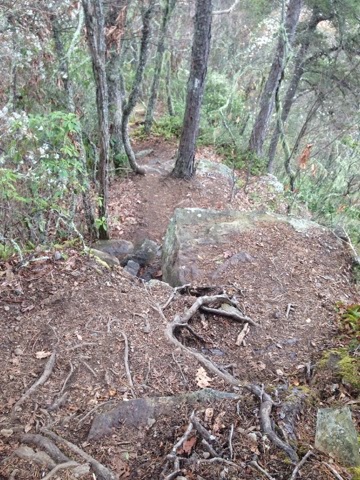 Around 2:30 the mist and fog cleared enough for some partial views. 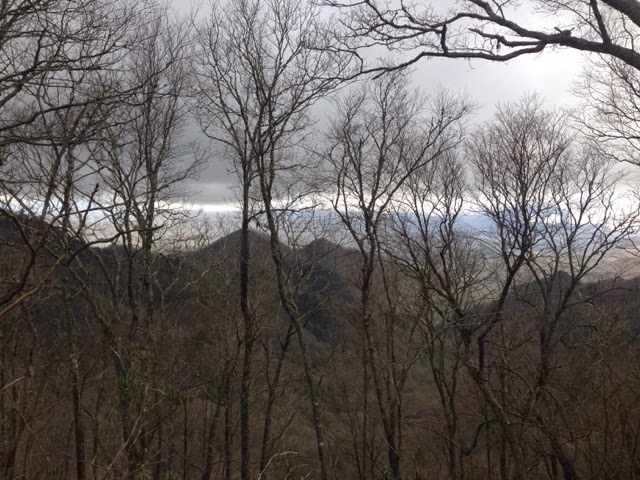 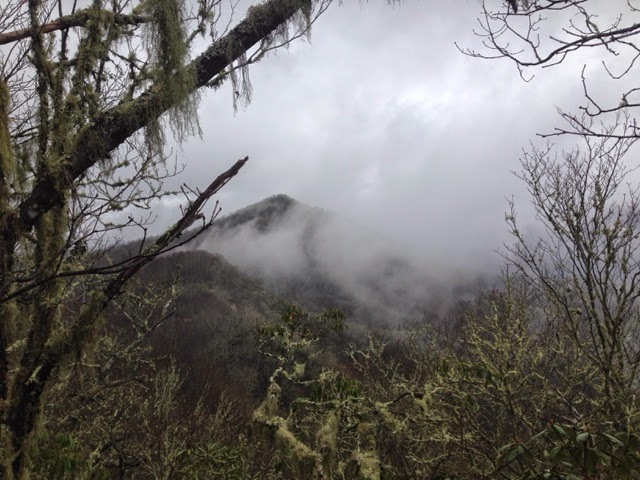 Cool Mountain through the fog
After dropping close to 3,000 feet of elevation, I finally arrived at the NOC(Nantahala Outdoor Center), which is a Mecca for white water rafters. They graciously agreed to let me hang my hammock on their property for free. I am currently camped out right next to the rapids. There are two restaurants here as well, although I'm just eating my hiking food. I did splurge for a beer though. I met some really cool people today. I keep hearing about 2 families that are hiking together, I finally got to meet them. It's 5 adults and 10 kids. They are being called the Swiss Family Robinson. I met, Tobasco(an uncle), Lollipop(15 year old girl), and Mud Magnet(9 year old boy). They were really nice and I really enjoyed talking with them. I also met a young German kid, fresh out of high school. His trail name is Harry Potter. I hiked with a lady named, Advil, who is from Salt Lake City. The diversity on the trail is amazing. 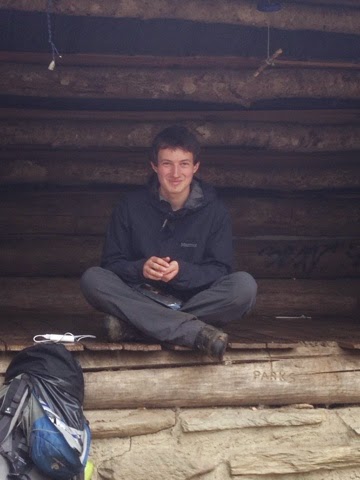 Harry Potter
I'm going to bed tonight with very high spirits. The sound of rapids should sing me to sleep. I'm hoping the storm forecasted for tonight and tomorrow doesn't materialize, but that is probably wishful thinking.
"And now it was official: I loved REI more than I loved the people behind Snapple lemonade."
Cheryl Strayed, Wild: From Lost to Found on the Pacific Crest Trail
Posted by Yoda at 4:45 PM