Day 49- Return of Yogi the Bear

The wind decided to play nice last night. It died down to a normal level just before I fell asleep. I slept very well last night and woke up feeling refreshed this morning. When I woke up it was already very light out. For a second I thought that I had over slept, but it was only 4:45. It is crazy how long the days are already. I went back to sleep until 5:30. Turtle and I left camp together around 6:15. Within a few miles I had pulled ahead of him. My longer breaks waiting for him to catch up yesterday really took a toll on my muscles. I knew that today I wanted to take shorter breaks. As a result I didn’t see much of him today. We got water together at a spring early this morning and I hiked out before him. That was the last I saw of him until the last water of the day 3 miles before camp. 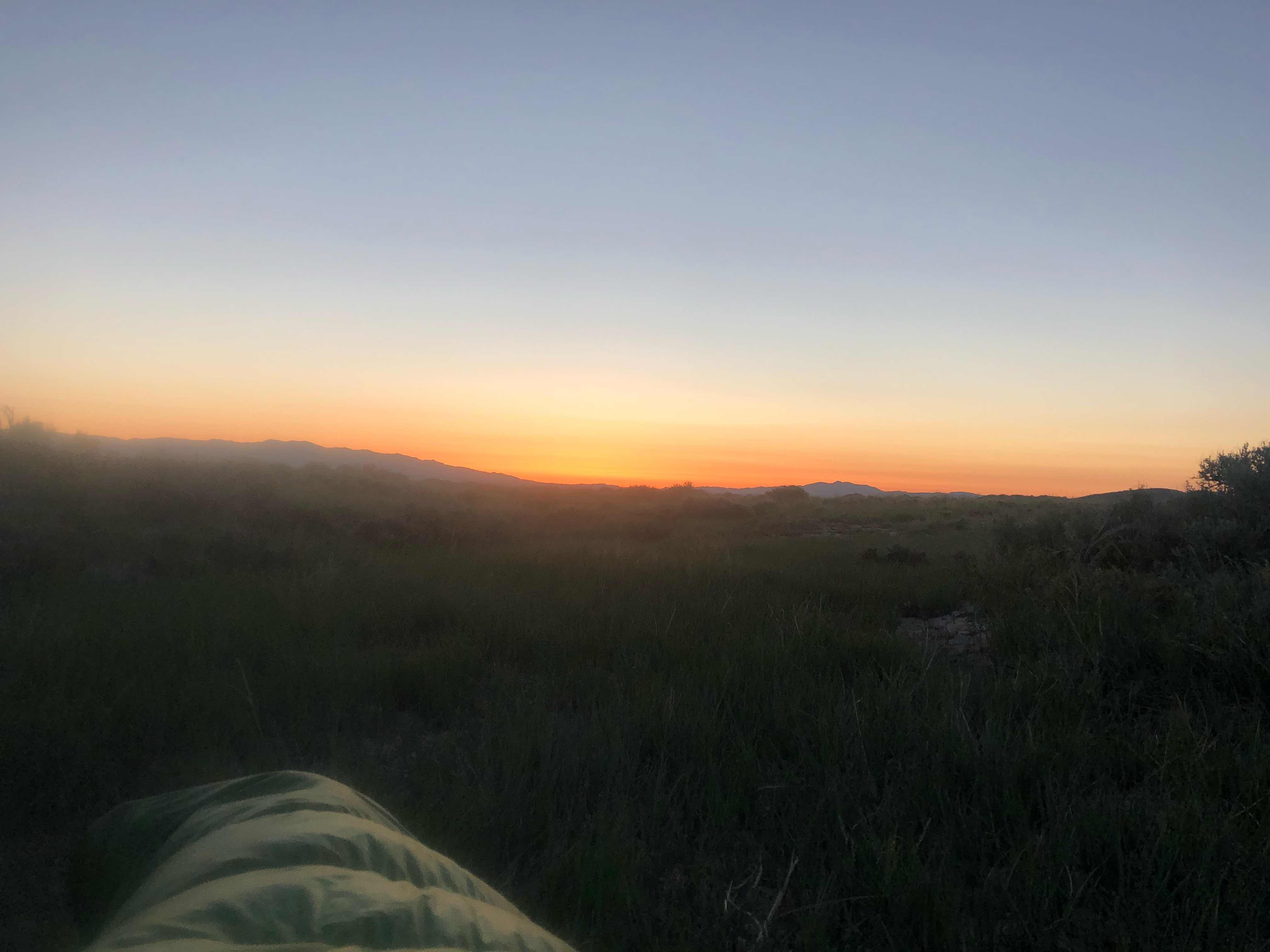 Sunrise from my sleeping bag
The saving grace of the day was my Harry Potter audiobook. Today’s hike was even more boring than yesterday. I spent the entire 30 miles on two track dirt roads, which was actually better than being on a trail. Trails through this type of terrain tend to be cross country, bushwhacking through and around sagebrush. The hiking was really easy without the high winds to contend with. My goal was to hike over 30 miles. I really wanted to hit 35, but I didn’t want to get too far away from Turtle. 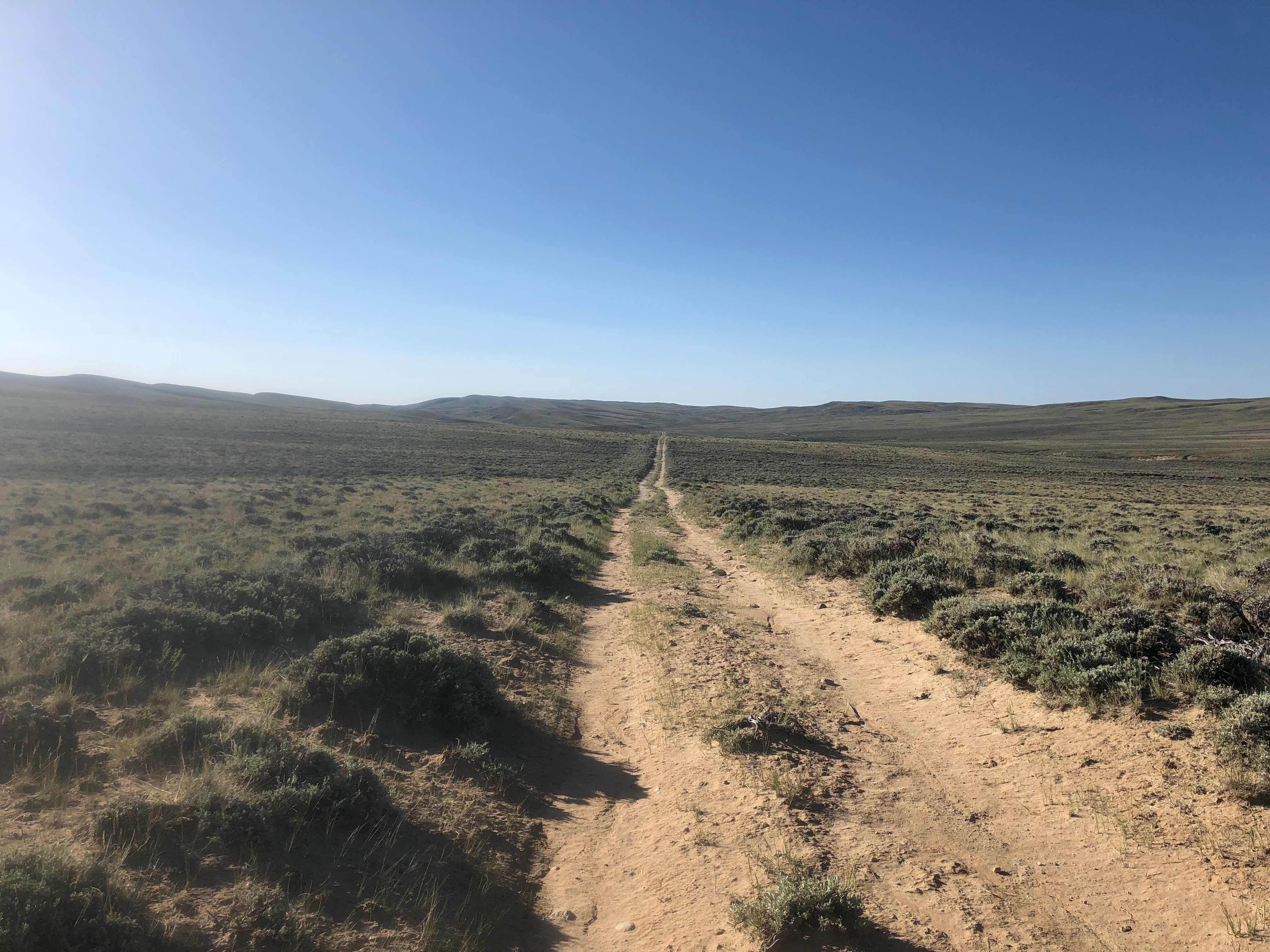 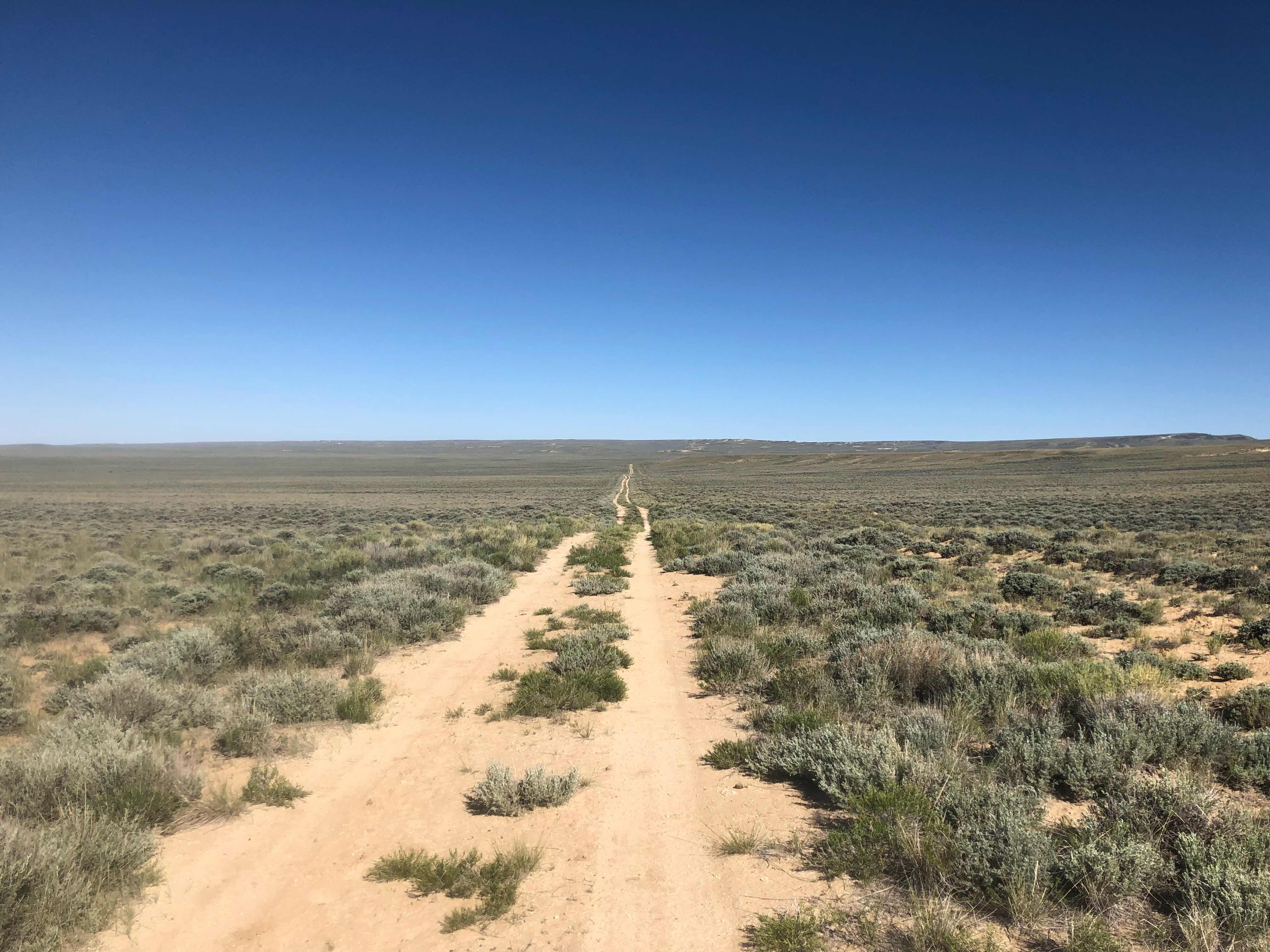 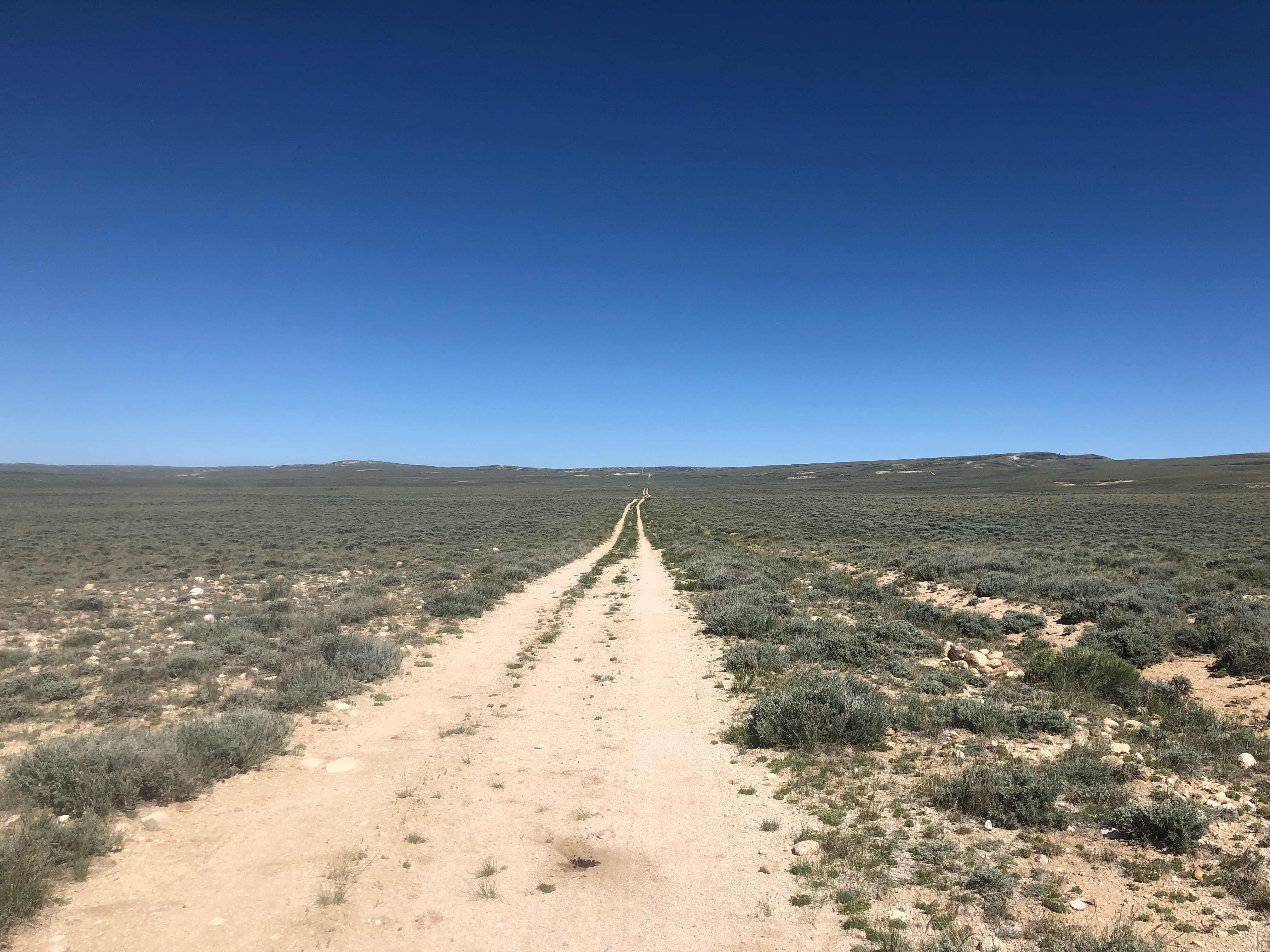 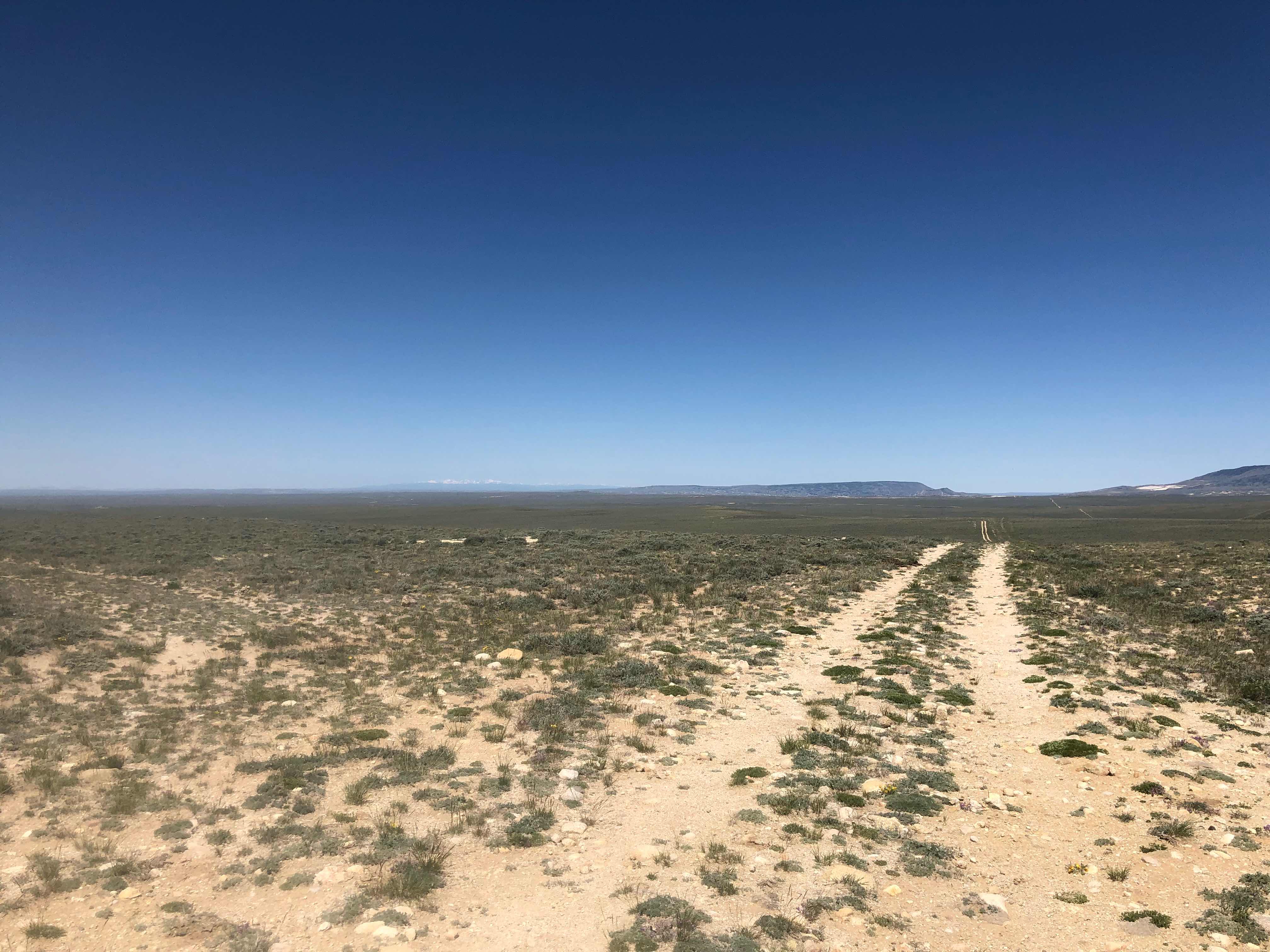 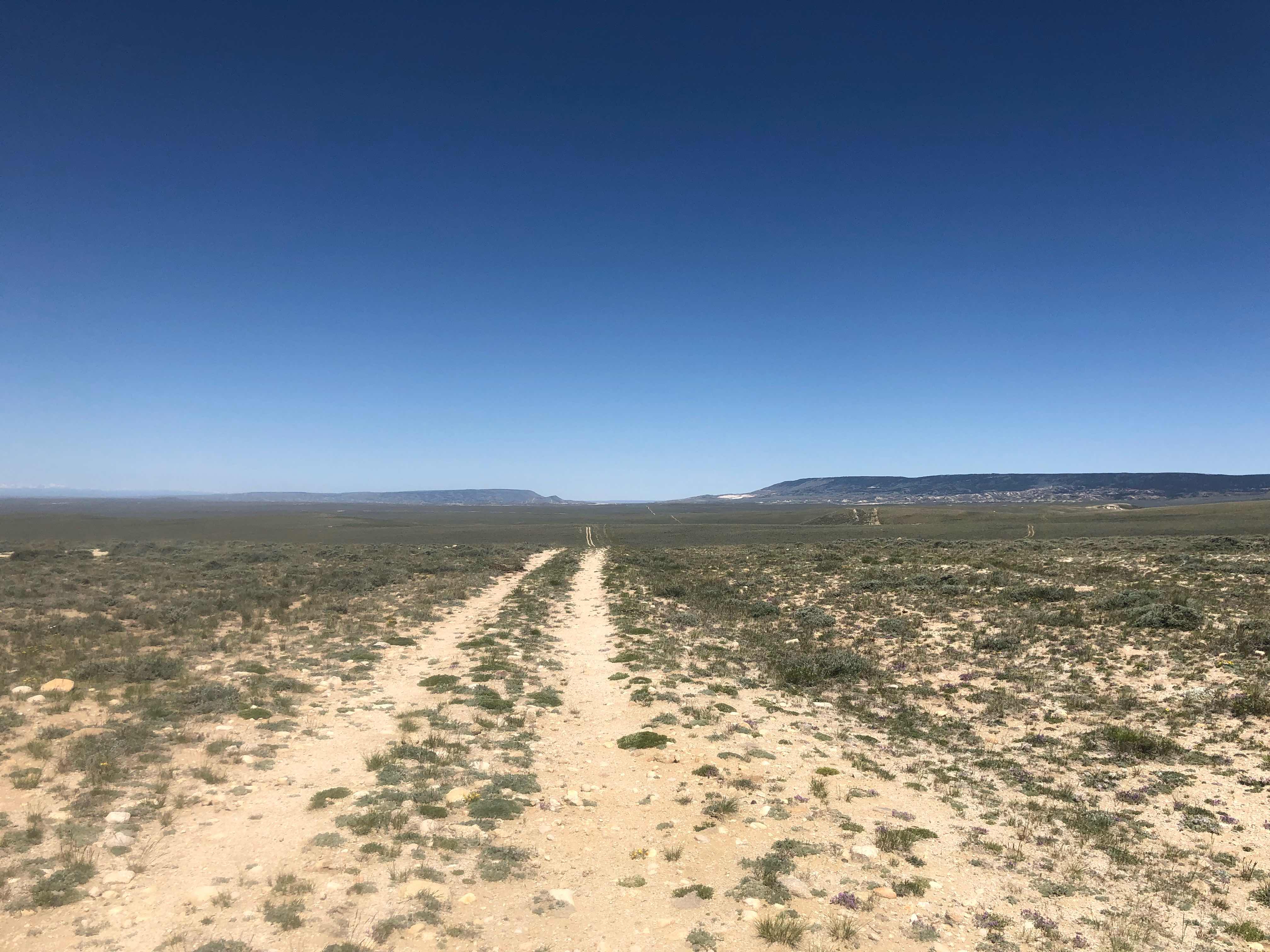 2:00 view
I have 14 of these types of pictures. I took one every hour. As you can see, not a big variety in how I spent my day. I saw a lot of cows, antelope, and a big herd of wild horses. Around two o’clock I came across a reservoir. I had planned on filtering some water really quick and then pressing on. When I arrived there were a bunch of trucks parked there. I saw several different groups of people fishing. My instincts kicked in and I hoped to yogi(getting stuff from people without actually asking for anything) some potable water. I saw a large family with 2 trucks parked next to the waters edge. I decided that they were prime candidates. I walked toward where the grandfather was fishing and dropped my pack close to him. I made a big production of getting out my water bottles and choosing a good spot to collect from. I said a brief hello and bent down to fill my bottles. I wasn’t even close to filling up with water when he spoke up. “If you need water I have some ice cold bottles in the cooler over there” he said. Bingo! I had successfully yogied myself some clean ice cold drinking water. I headed to the back of his pickup truck to fill up my bottle. His 2 daughters, 4 grandchildren, and wife had just started to eat some hotdogs. While I sipped my water one of his daughters offered me a hotdog. I downed it in 2 bites. A few minutes later after conferring with the rest of the family they had decided that they couldn’t eat anymore and offered me the last 5 hotdogs. The day couldn’t have gotten any better! I ate 3 hotdogs and some chips. I told them that Turtle should be along shortly and if they saw him to give him the 2 remaining hotdogs. I asked if I could have another bottle of water and I was told to take one and a soda. I downed a Mountain Dew in 4 gulps. I must have seemed like I was starving and dying of dehydration. Before heading out I told them about trail angels and trail magic. I explained that this was the best trail magic I’ve had so far. That put a smile on their faces. Thanks Ron and family for making a boring day better! 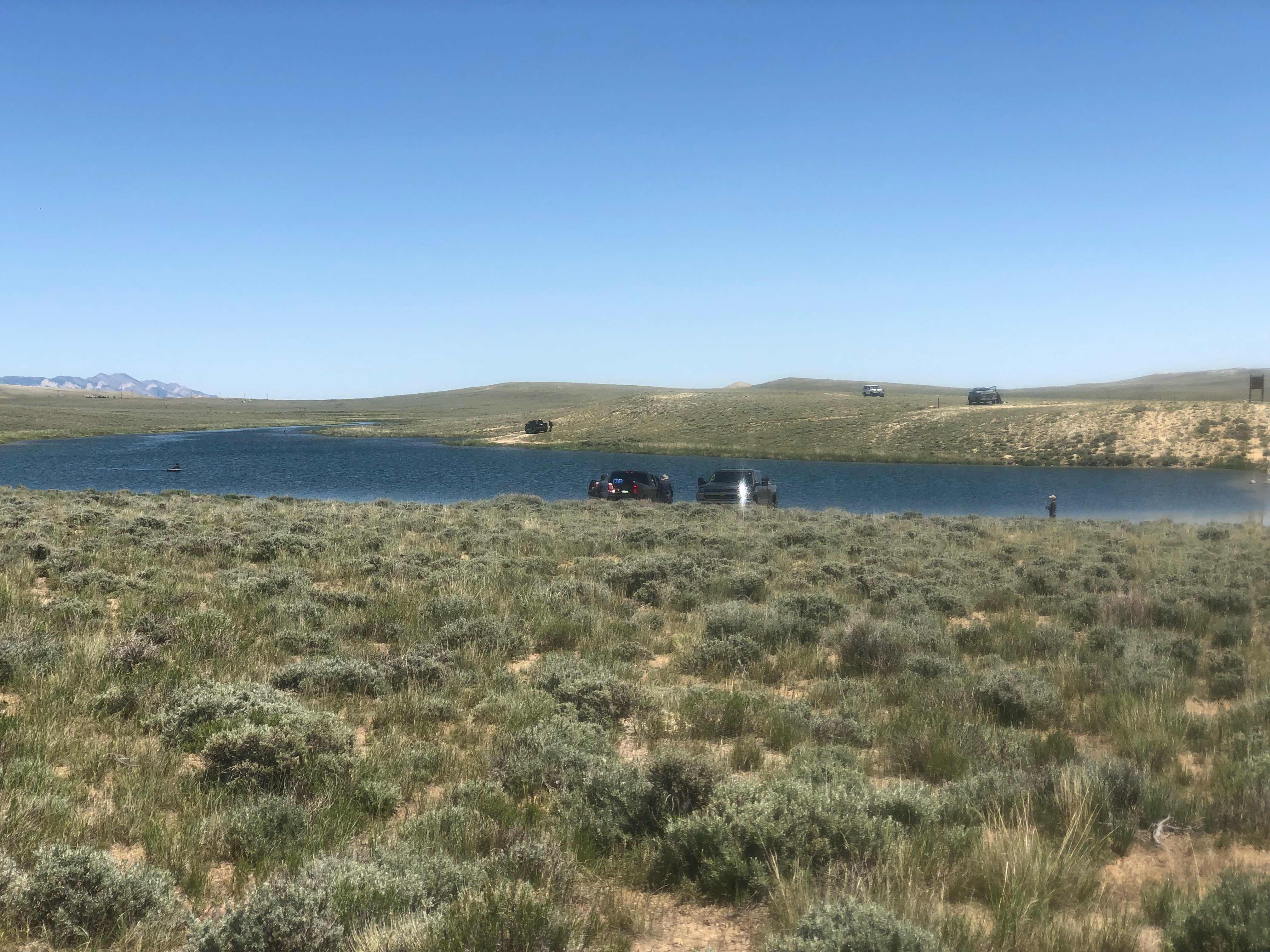 Reservoir with Ron and his family
The next seven miles passed by pretty quickly since I was all jacked up on Mountain Dew. I passed by more cows, antelope, and horses. I saw the same views as I had in the morning. I hit a wonderful ice cold spring around mile 27. I decided to give Turtle an hour to show up before hiking on. It was getting late in the day and I really wanted to hit 30 miles, but I didn’t want to hike after 8:00. Turtle finally showed up just as I was getting ready to leave. He stayed to far behind me today because he left his trekking poles behind at our first water source. He didn’t realize it for a half mile. That was a costly 1 mile round trip mistake. To add insult to injury he didn’t talk to Ron and his family so he didn’t get any hotdogs or Mountain Dew either. I guess it just wasn’t his day. 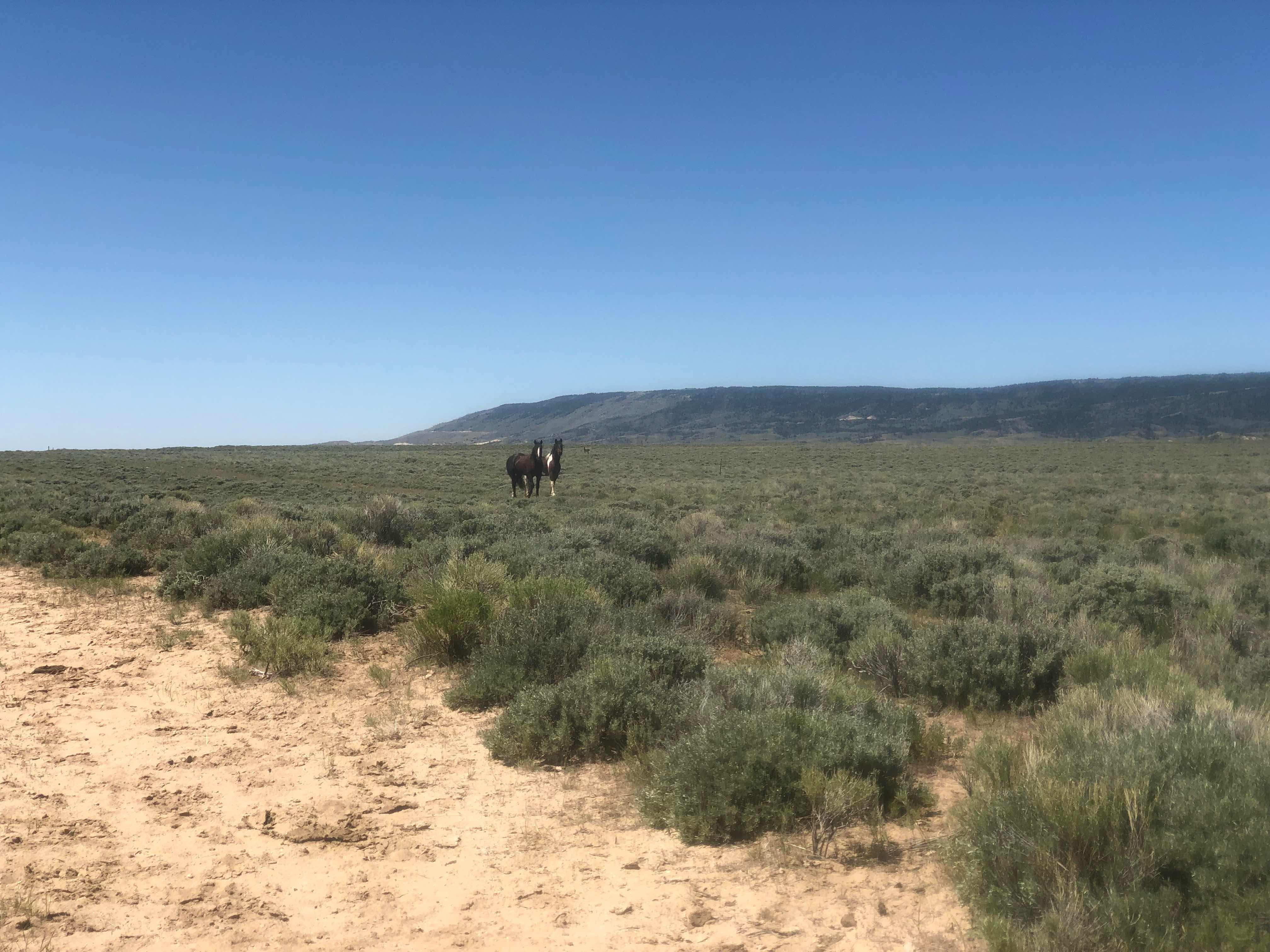 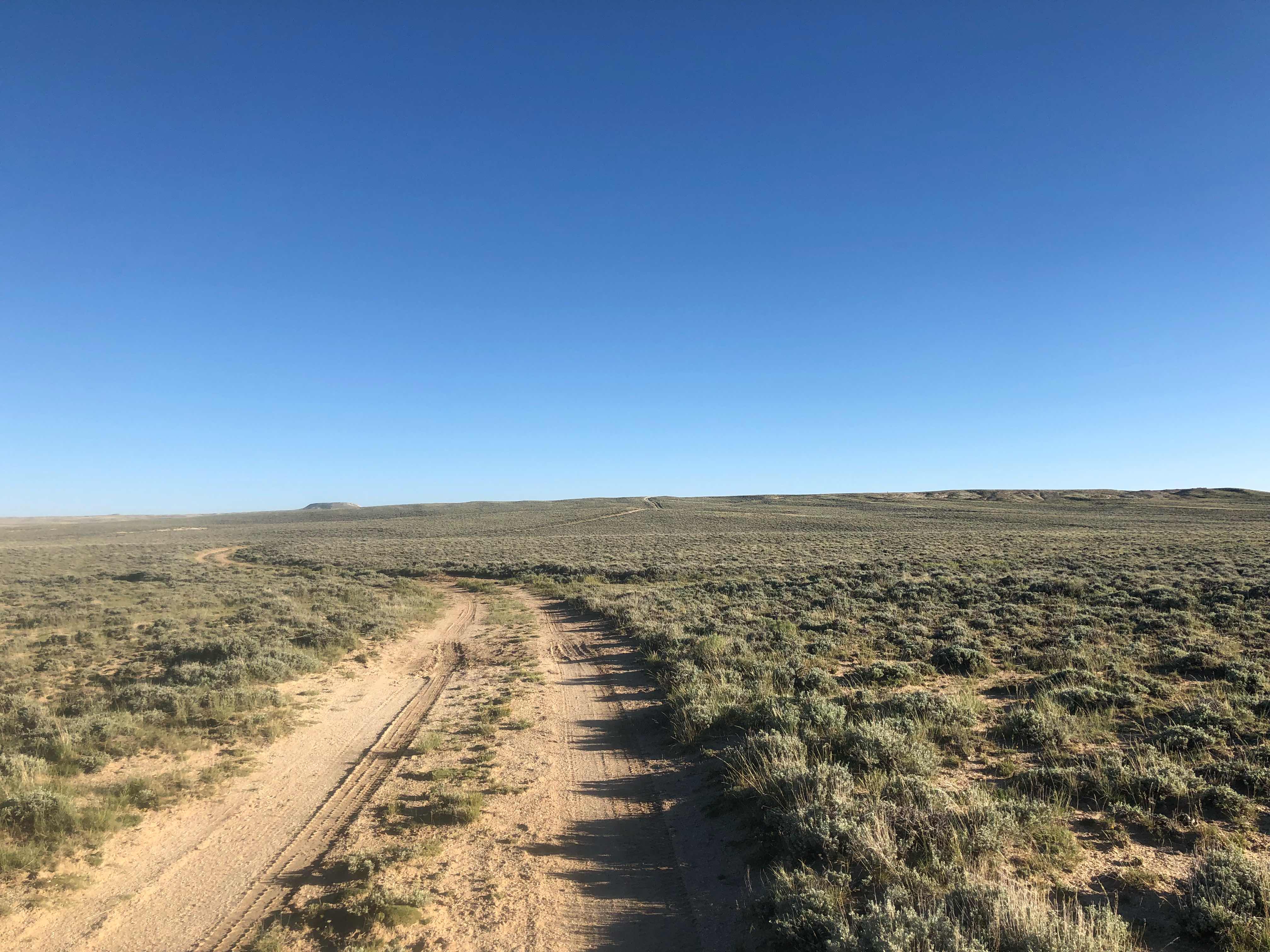 Last part of my day 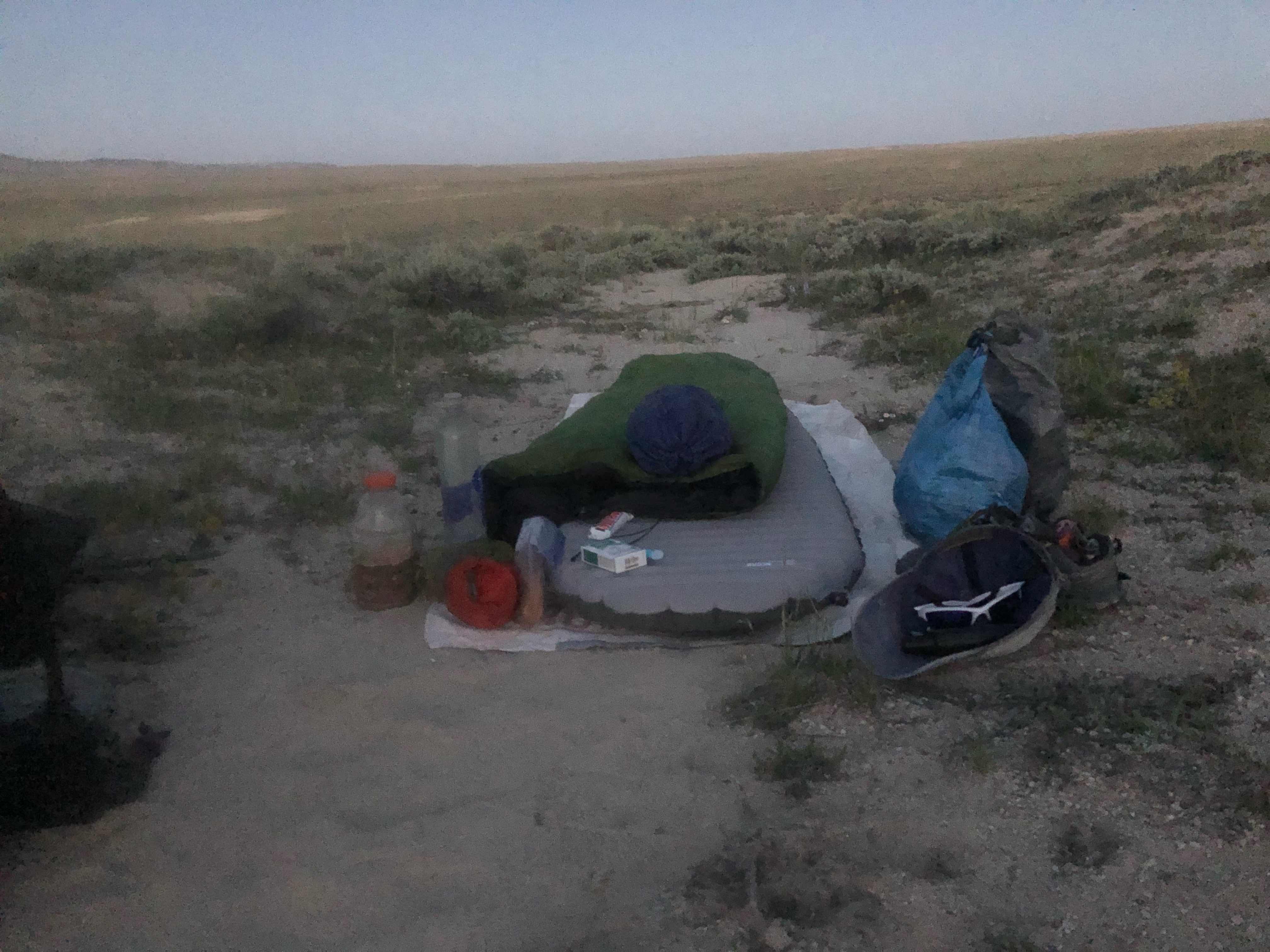 Camp tonight
I’m guessing tomorrow will be more of the same. As long as the wind cooperates again I’ll be a happy hiker. This isn’t the most exciting section of trail, but I’m enjoying the solitude and the high mileage days. It is extremely satisfying for me to stretch my legs and see what I’m capable of doing.
“Carry out a random act of kindness, with no expectation of reward, safe in the knowledge that one day someone might do the same for you.”
– Princess Diana