* Mt. Elbert added 3,900 feet of elevation gain and loss
Today was such a super, fantastic, spectacular, wonderful, awe inspiring, awesome day. I feel like I could throw in a few more adjectives, but I think you get the point. The day didn’t start off very well though. I woke up at 12:26am. I wasn’t sure at first what caused me to come to so fully. It took about 30 seconds for my mind to process the fact that it was raining. I just laid there for a few seconds before my instincts kicked in. As soon as I lifted my head my inflatable pillow blew away. I quickly scrambled out of my sleeping bag to retrieve it. In the process I stepped on something with my bare foot and slashed my foot open. I grasped my sleeping pad and bag and hurried over to Randy’s camper. It had a large awning and I threw my stuff down and got into my sleeping bag. I laid there for a few minutes imagining how wet the rest of my stuff was getting. I finally decided to get up and bring everything under cover. Of course by then it had stopped raining. It was a very brief shower that I could have waited out. After all of the excitement I was wide awake and it took me forever to go back to sleep. Turtle and Brightside were also cowboy camping, but they never moved a muscle.
I had my alarm set for 5:15, so I could get an early start on climbing Mt. Elbert. As I was packing up Randy came out of his camper. He couldn’t sleep so he cooked Turtle and I breakfast burritos and even had coffee ready for us. What a great guy! I decided to take mine togo, but Turtle stayed behind to eat his. We had a short walk to get back on trail. I only had to hike a few miles before I was at the Elbert trailhead. I was a little worried about how I was going to hike Mt. Elbert and make it to Breckinridge on time to meet my Aunt and Uncle. I decided to text them to see if I could push the date back a day. If not I was prepared to skip Elbert. When I turned on my phone I had a text message from my Aunt suggesting that we push things back so I had more time. I love that they had anticipated my needs! Turtle had caught up to me and I told him we would have a more leisurely schedule into Breckinridge. He was relieved as well.
Mt. Elbert was going to be a strenuous hike. Over 3.8 miles we would gain 3,900 feet in elevation. The hike wasn’t technical, but it did test my strength and endurance. Other thruhikers told us to expect the hike to the summit to take three hours. If you know me you won’t be surprised to hear me say that I wanted to beat that time. The first part of the hike took us through a beautiful aspen filled forest. I was in heaven. The first 2,000 feet of the climb went by quickly. 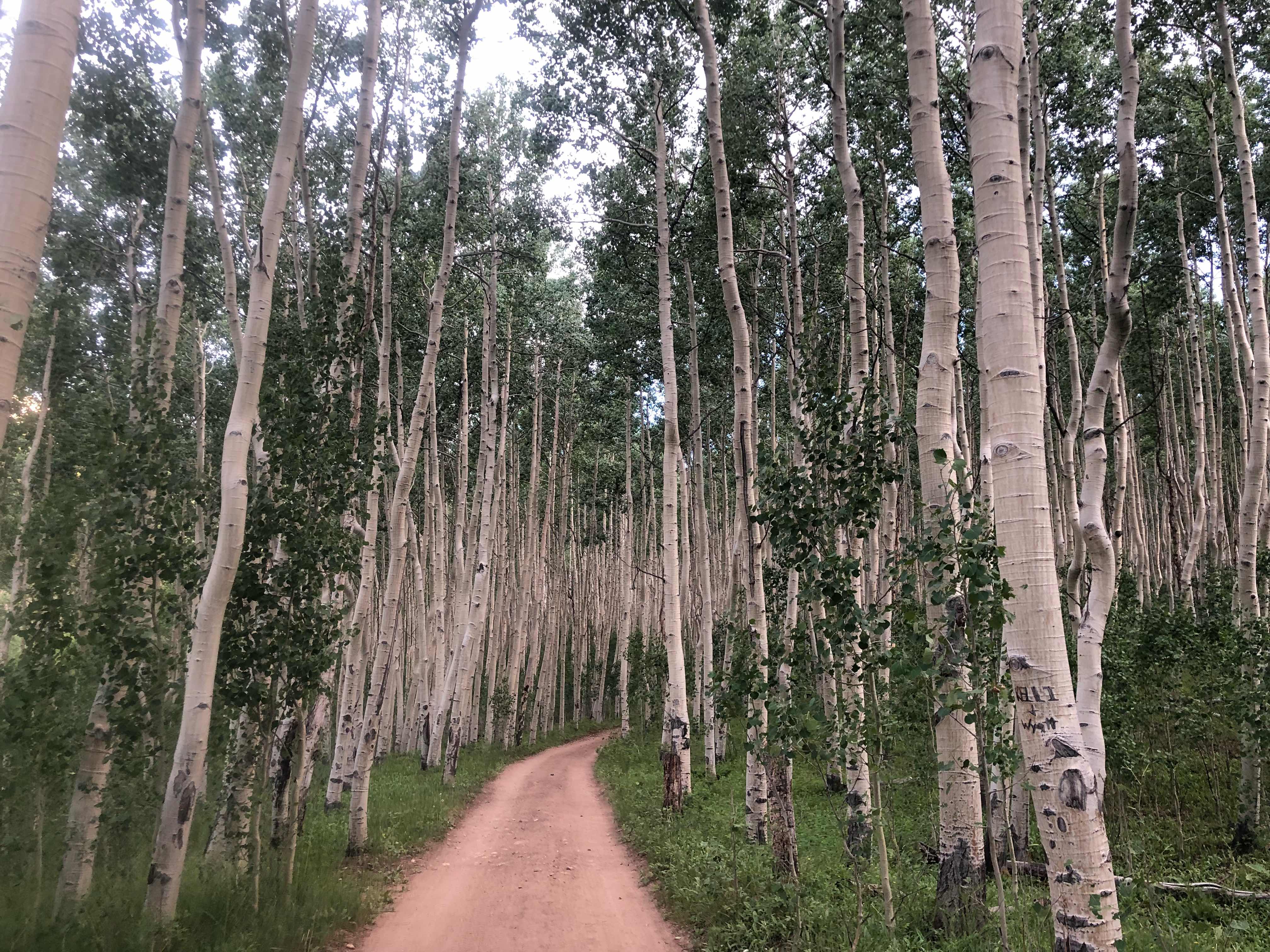 Aspen lined trail
We were both carrying full packs. Ideally we would have slackpacked(not carried everything in our packs, just food, water, and rain gear) but that wasn’t an option. I always get a kick out of blowing past day hikers. They have either tiny packs with water or no packs. Since hiking is my full time job, I’m able to hike past them as if they are standing still. I’m not saying anything bad about dayhikers. I applaud the fact that they are out here in nature. I’m just pleased that I am so strong. Since it was a weekend we passed by a lot of day hikers. The trail was really busy. I stopped about halfway up for a short break. I was feeling great, but I wanted to really take everything in. 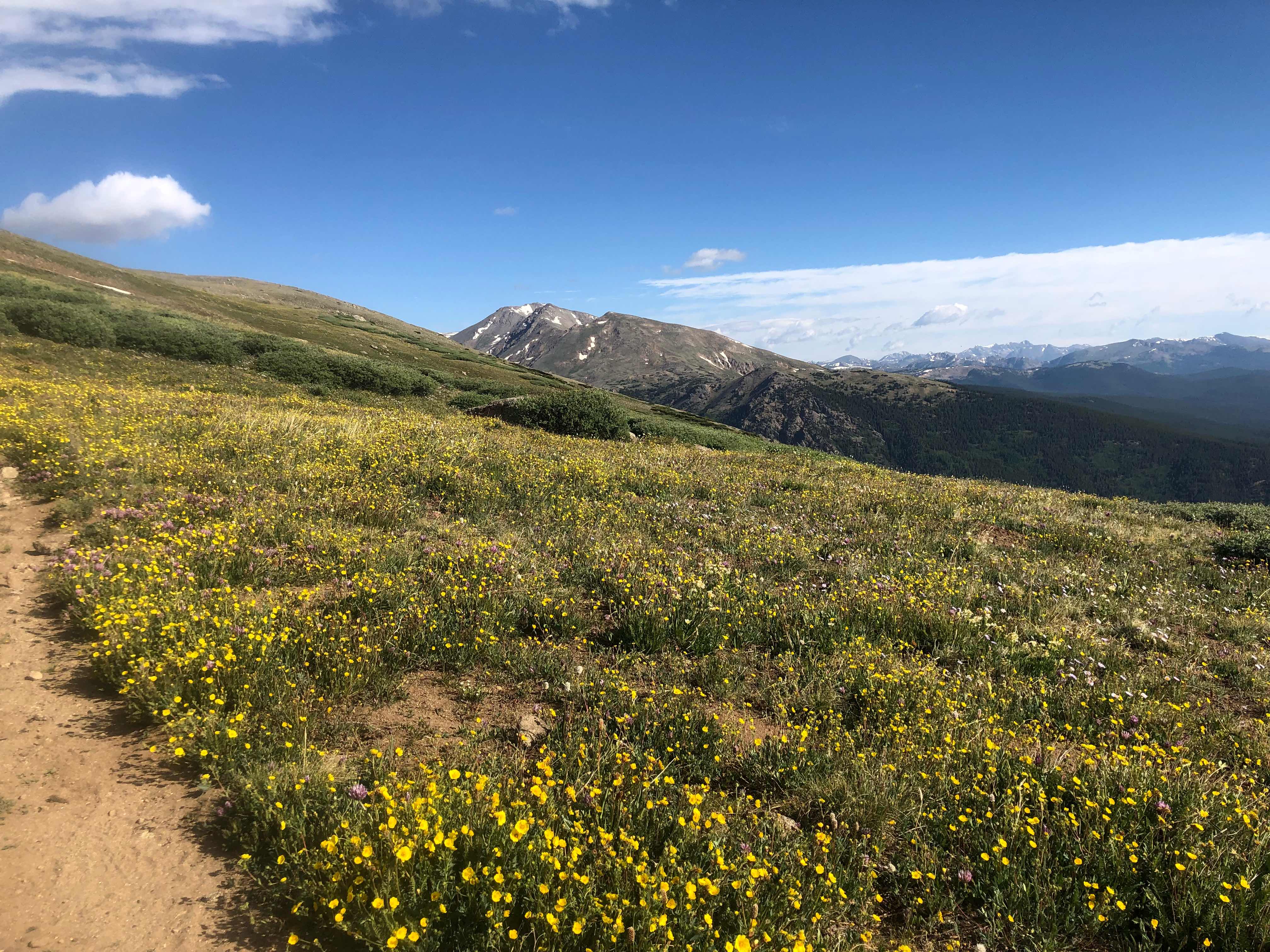 View of Mt. Massive(another 14’er) check out all of the wildflowers
The climb became much steeper after the break. Around 13,000 feet I felt like I was sucking in oxygen through a cocktail straw. Cardiovascularly I was holding up, but my leg muscles kept letting me know that they weren’t getting enough oxygen. I made it to the summit in just over 2.5 hours. There were a ton of people up there, but most of them left shortly after summiting. I practically had the mountain to myself for about five minutes. It was pretty chilly at the top, but not as bad as when I was on Mt. Whitney on the pct. Coincidentally today marked the two year anniversary of my Mt. Whitney summit. Apparently June 24th is when I climb 14,000 foot peaks! 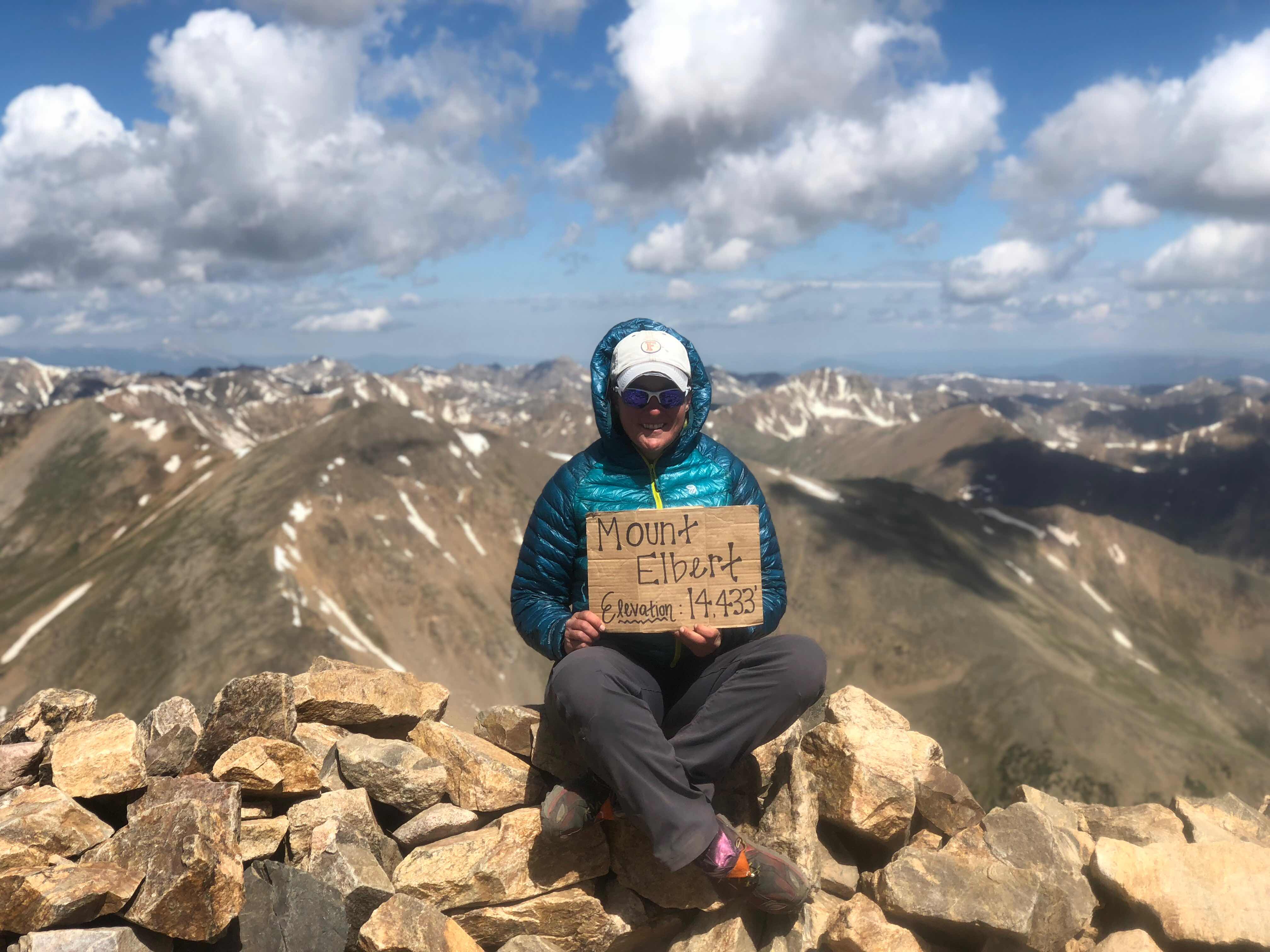 Semi Yoda pose
Turtle arrived about 30 minutes behind me. We celebrated with a little nip of Jack Daniels whiskey and a snickers bar. I was glad that we were able to add this into our schedule. It was a highlight of this trip for me. We spent close to an hour on the top before deciding to head back down. Neither of us liked the looks of the clouds rolling in. 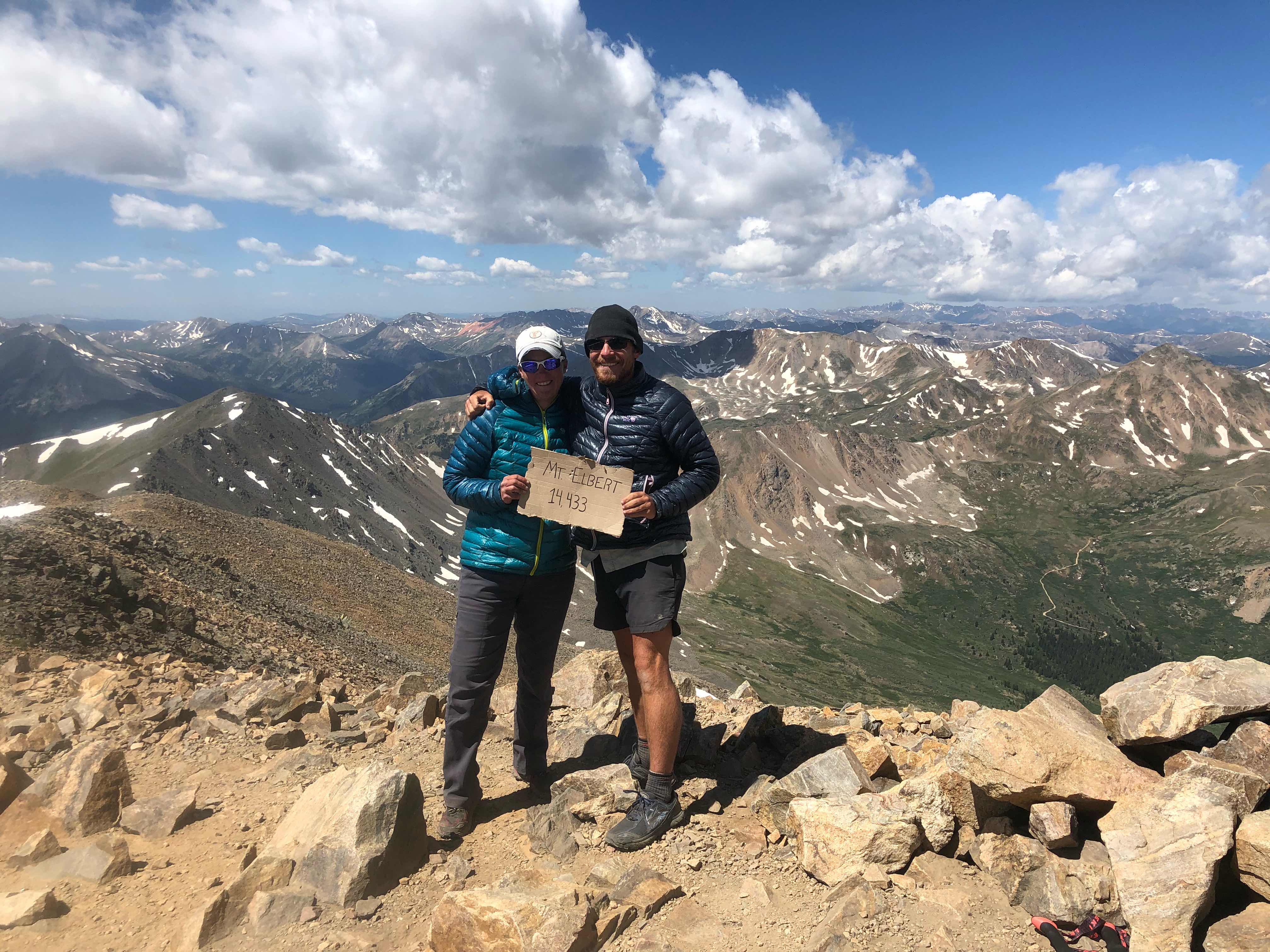 Rare picture including both of us 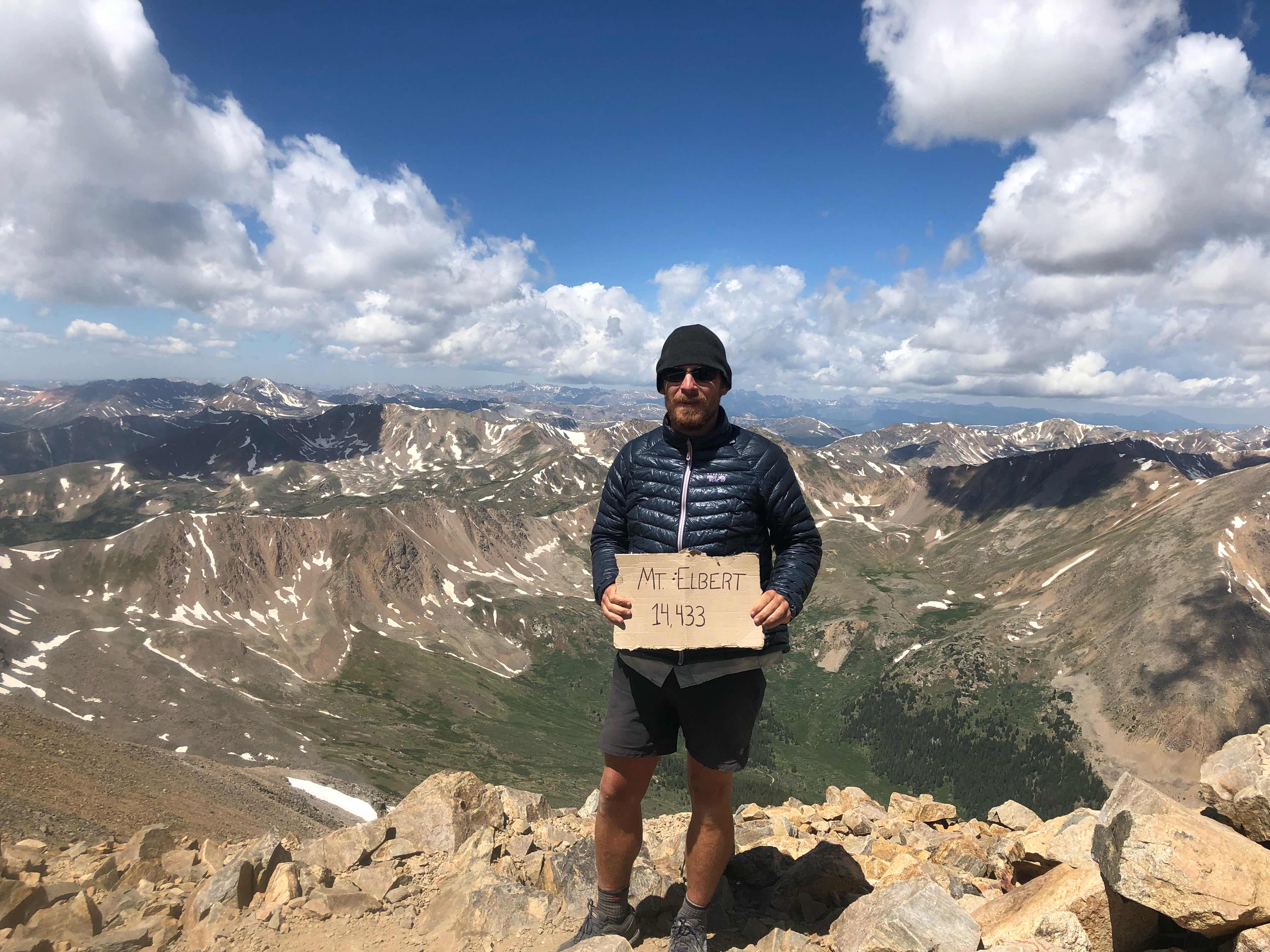 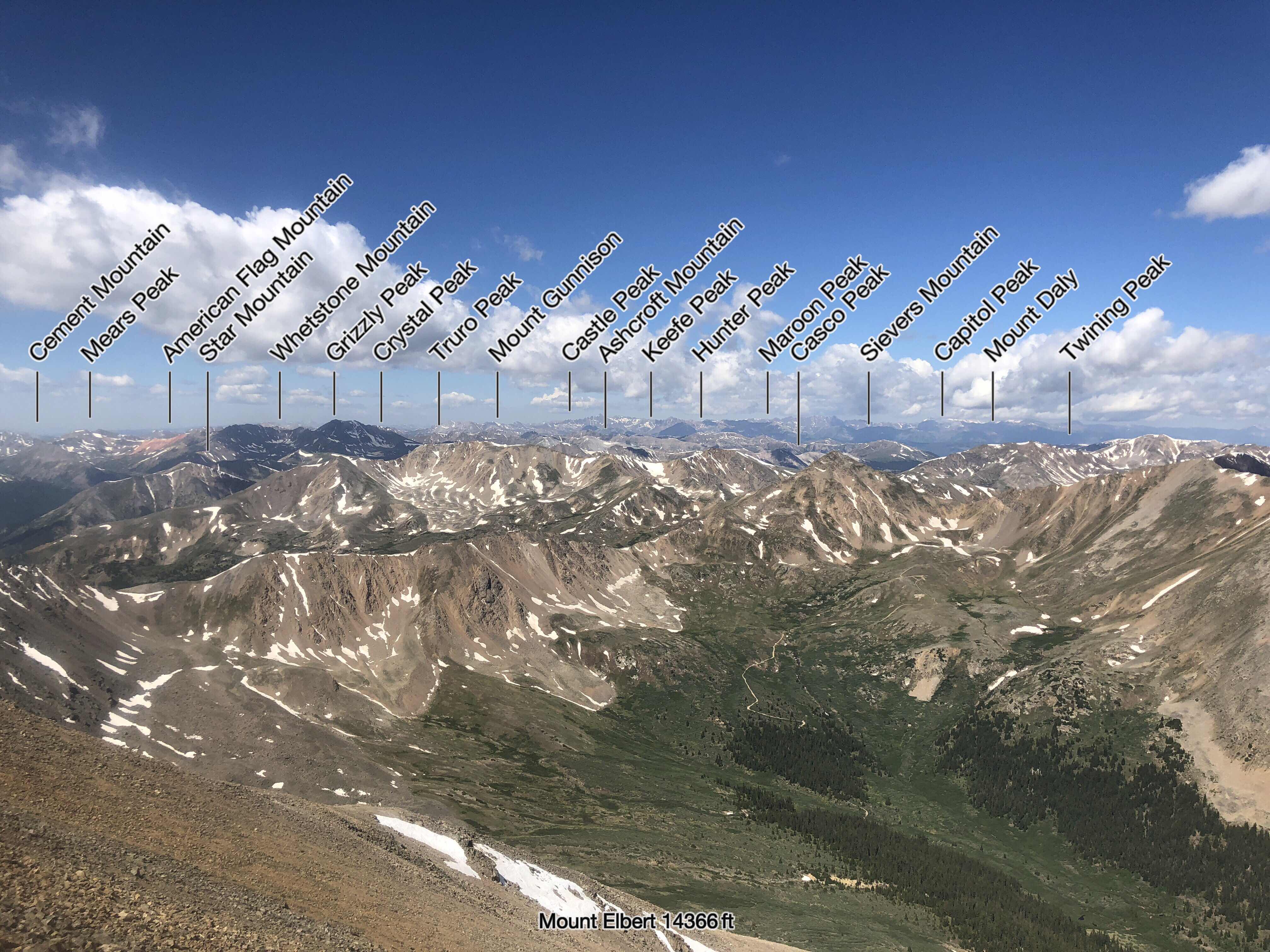 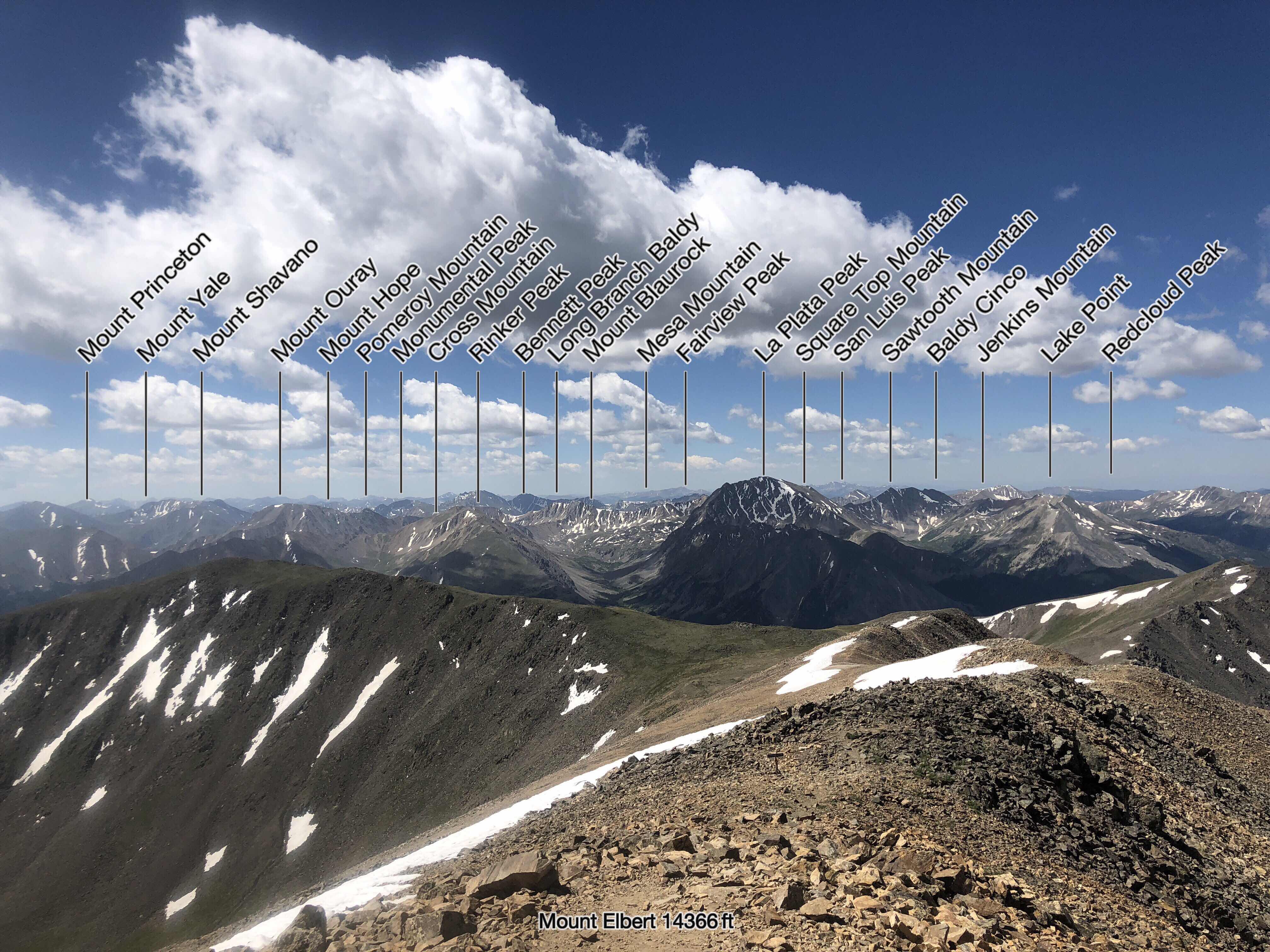 There are 10 14’ers pictured here. This is the Collegiate Mountain range that I hiked through the last few days 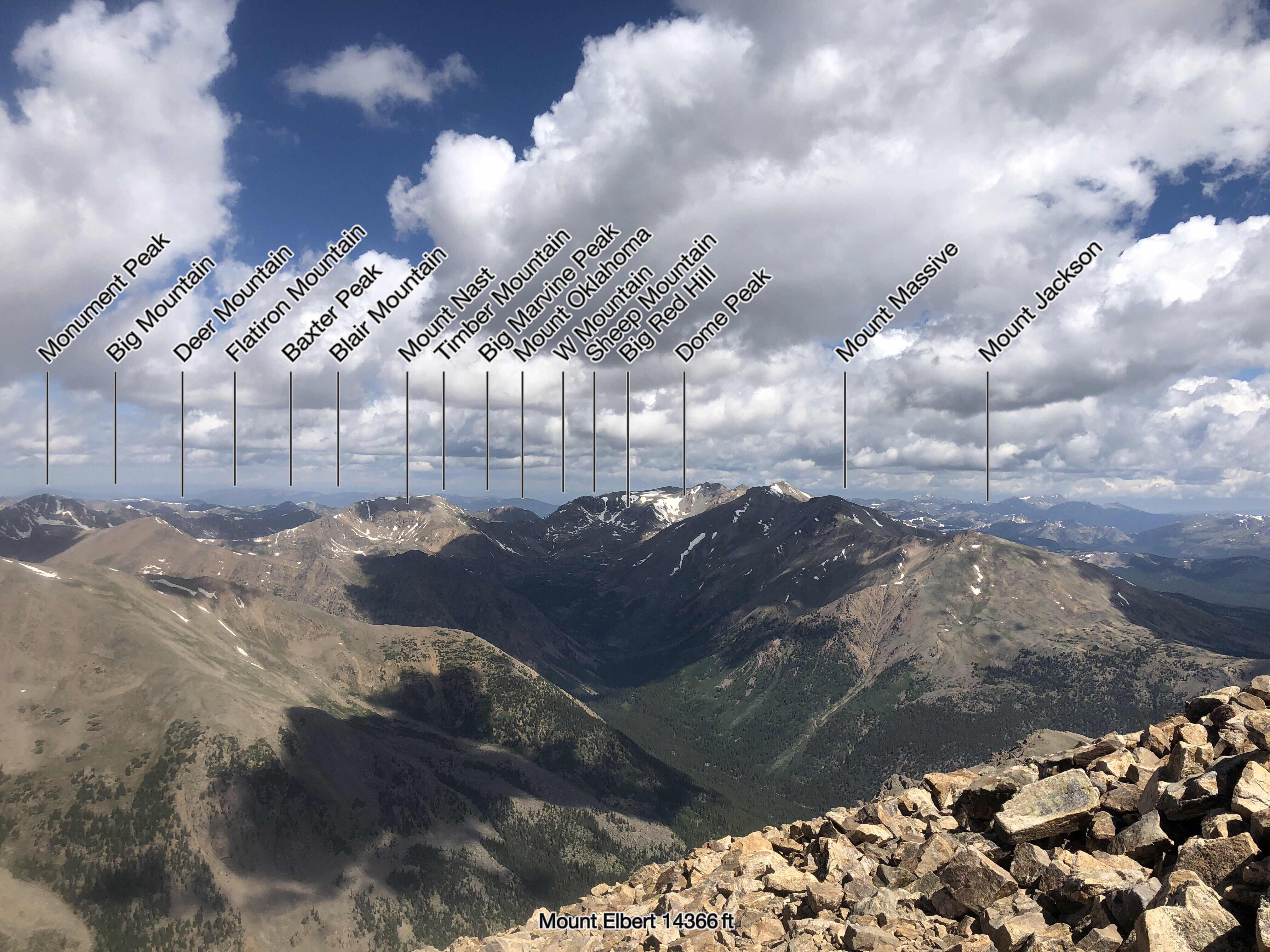 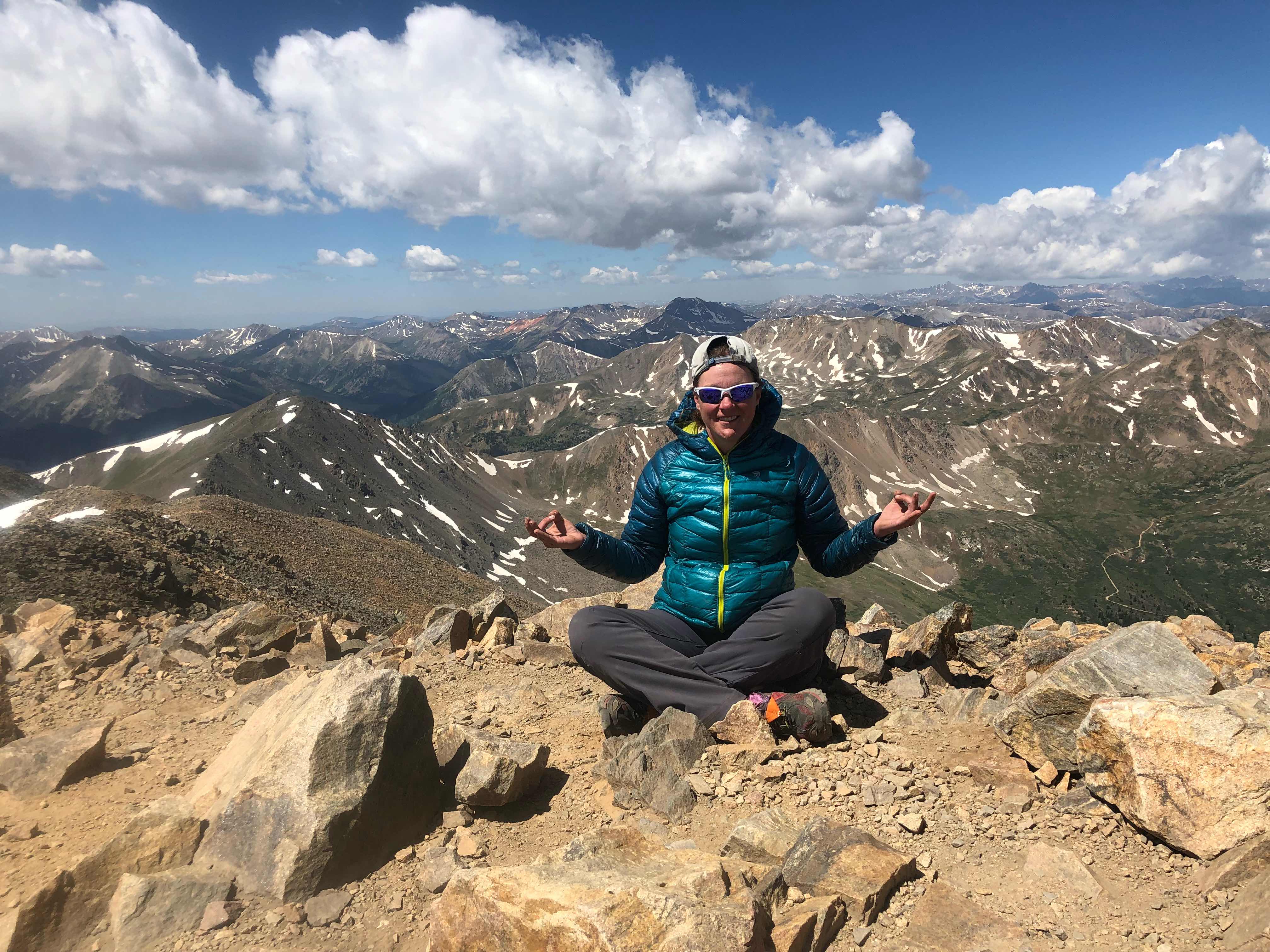 Better Yoda pose
I really wasn’t looking forward to the hike down. I pride myself on my ability to climb uphill, but I’m pretty terrible with going down. My knees start to ache and I tend to slip a lot. This was really going to test me. The first three miles were very steep and the incoming clouds finally let loose. It began to snow/sleet on us within minutes of leaving the summit. On the brightside, snow is better than rain. At one point it was snowing horizontally, due to the wind. It was really a beautiful sight. 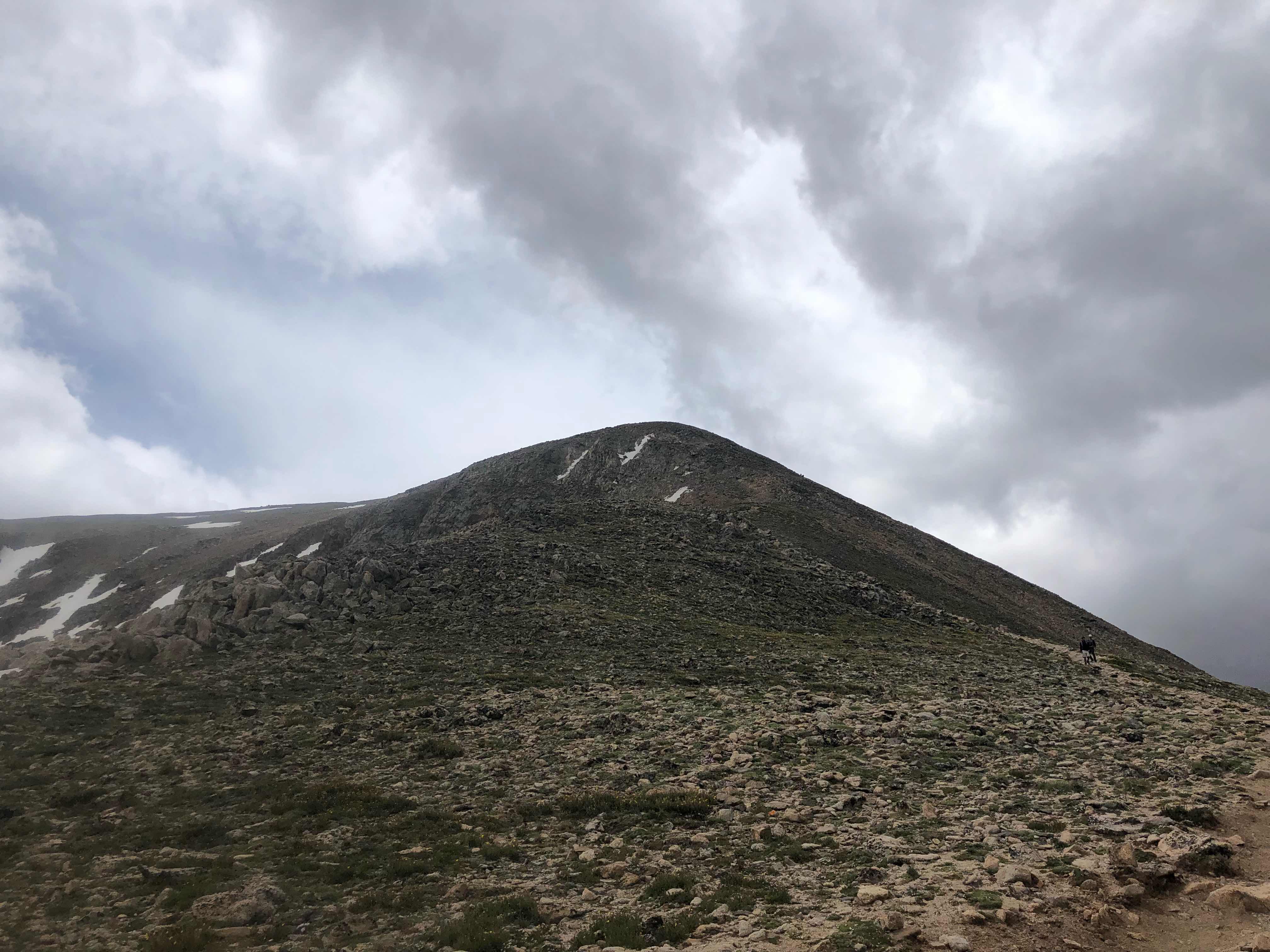 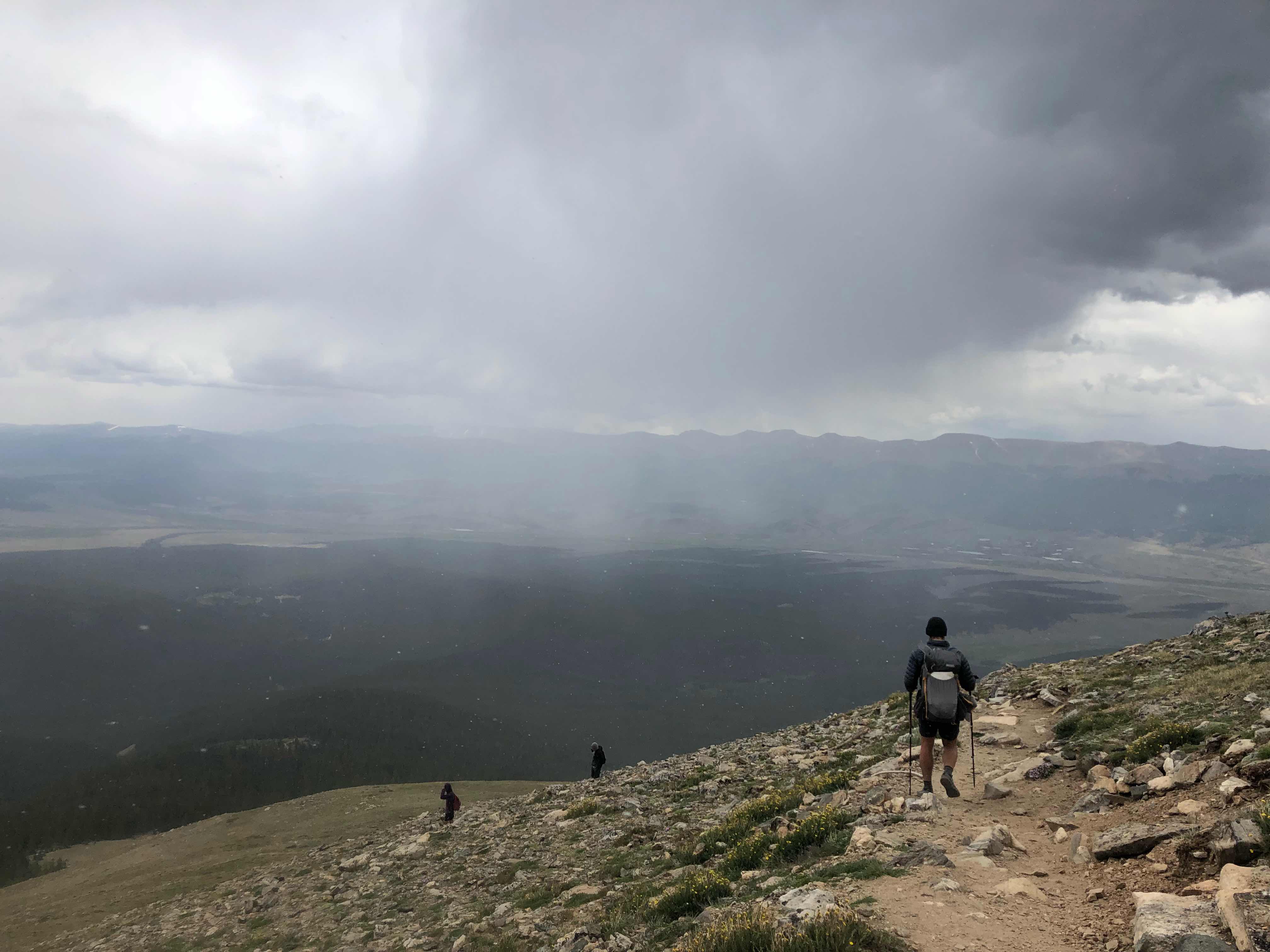 Trying to capture the snow in this picture. Kind of hard to see
It seemed to take forever to get into the safety of the trees. At one point I slipped, but I landed on my back so my pack took the blow. I dusted myself off and kept hiking. A few minutes later I noticed that my phone was gone. Oh, crap. It must have flown out of its pocket when I fell. I dropped my pack and began to climb back up. Everything looked the same. I couldn’t quite tell where I fell at. I scanned the side of the trail as I hiked back up. After a few minutes I began to panic. I just couldn’t tell where I went down and I really was losing hope that I would find it. Just when I had completely lost hope I saw it. Disaster avoided. I have insurance on my phone and could easily get a new one for free, but I would have lost about a month of pictures. That would have been horrible. I don’t post everything I take everyday on my blog. I did learn a valuable lesson, next time I fall I’ll check to make sure I don’t lose anything. I’m also going to upgrade my iCloud storage so all of my pictures are backed up in the cloud. 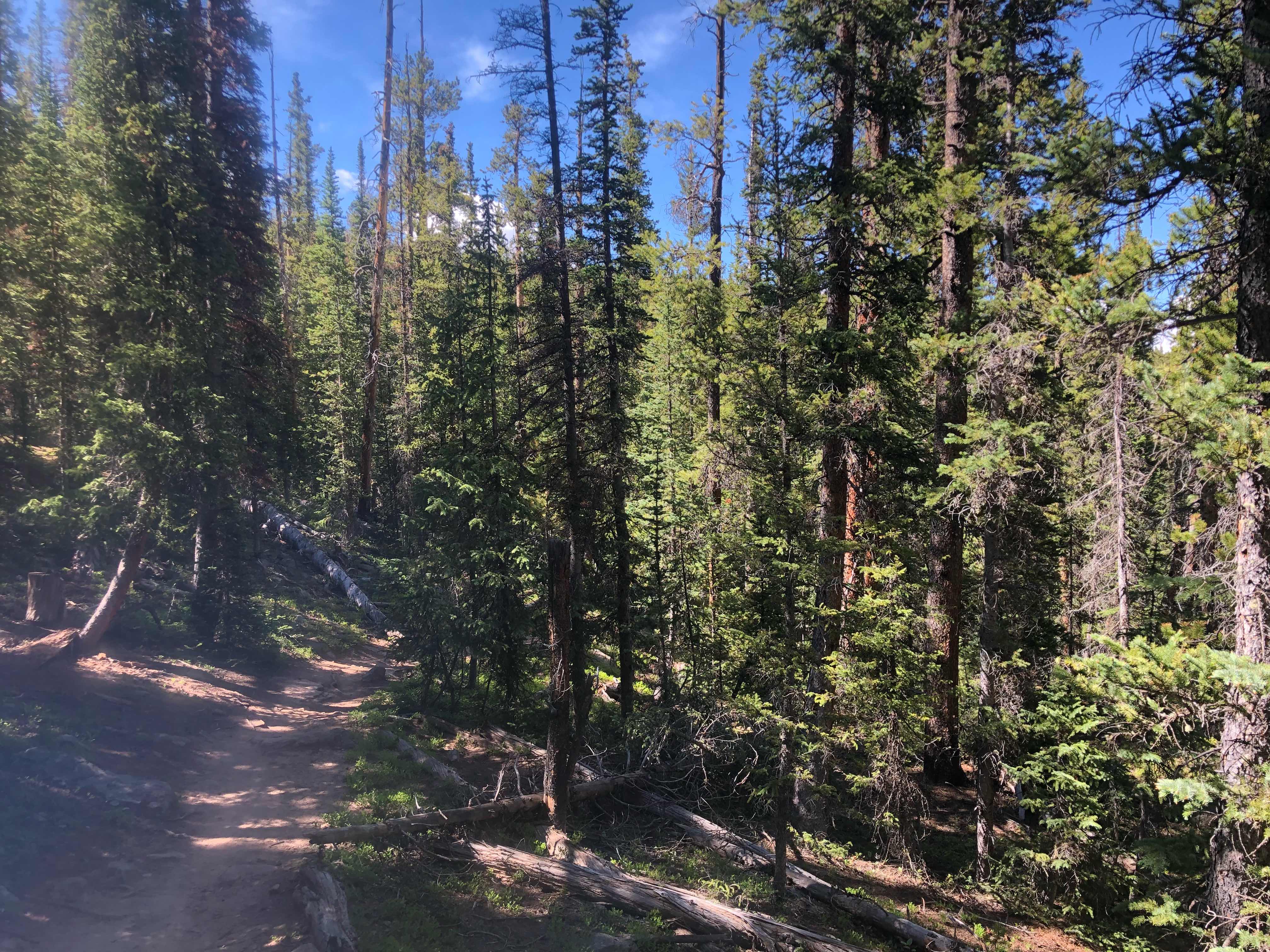 Safely below tree line
About the time we made it back to the cdt the weather improved. Turtle and I took a quick break to figure out how many more miles to do for the rest of the day. We decided on a campsite about 10 miles away. Turtle noticed an area on the trail that had dumpsters. We agreed that it would be a treat to get rid of the 3 or 4 wrappers we were carrying. This decision ended up becoming one of my favorite things about today. When we couldn’t find the dumpsters we asked a few people in the Mt. Massive trailhead parking lot. They didn’t know exactly where they were at, but once they found out we were thruhiking they offered to take our trash we ended up chatting with them for over an hour. They offered us beer, I declined but Turtle accepted. The mother and son duo were awesome people(sorry I forgot your names). The mom is hiking Kilimanjaro in a few weeks. After that she and her son will be hiking in France. Climbing Mt. Massive was a training hike for them. They both drove over two hours to meet up and do the hike. Massive is the second highest peak in Colorado. As we were chatting, two nice women from Grand Junction finished their Massive hike. It turns out that they are also training to hike Kilimanjaro in October. One of the women works once a month as a Radiologic Technologist at the med center in Telluride. A job that I might do this winter. We had a lovely talk and I’m sad to say that I also forgot their names. I also failed to get a picture. I think my mind was still befuddled from the Elbert hike. Chatting with such awesome people in a random parking lot is what really makes long distance hiking unique. I meet such rad people all of the time. If you guys are reading this, send me an email. I’d love to hear about your trips.
I briefly toyed with the thought of climbing Mt. Massive today as well. In the end I didn’t have the energy for another 6 miles round trip and 3,000 feet of elevation gain. Turtle and I hiked together today longer than we have in a long time. We never got more than a few miles apart. I made it into camp earlier than I have in a long while. It was nice to have all of my camp chores done before dark for a change.
Few more pictures from today: 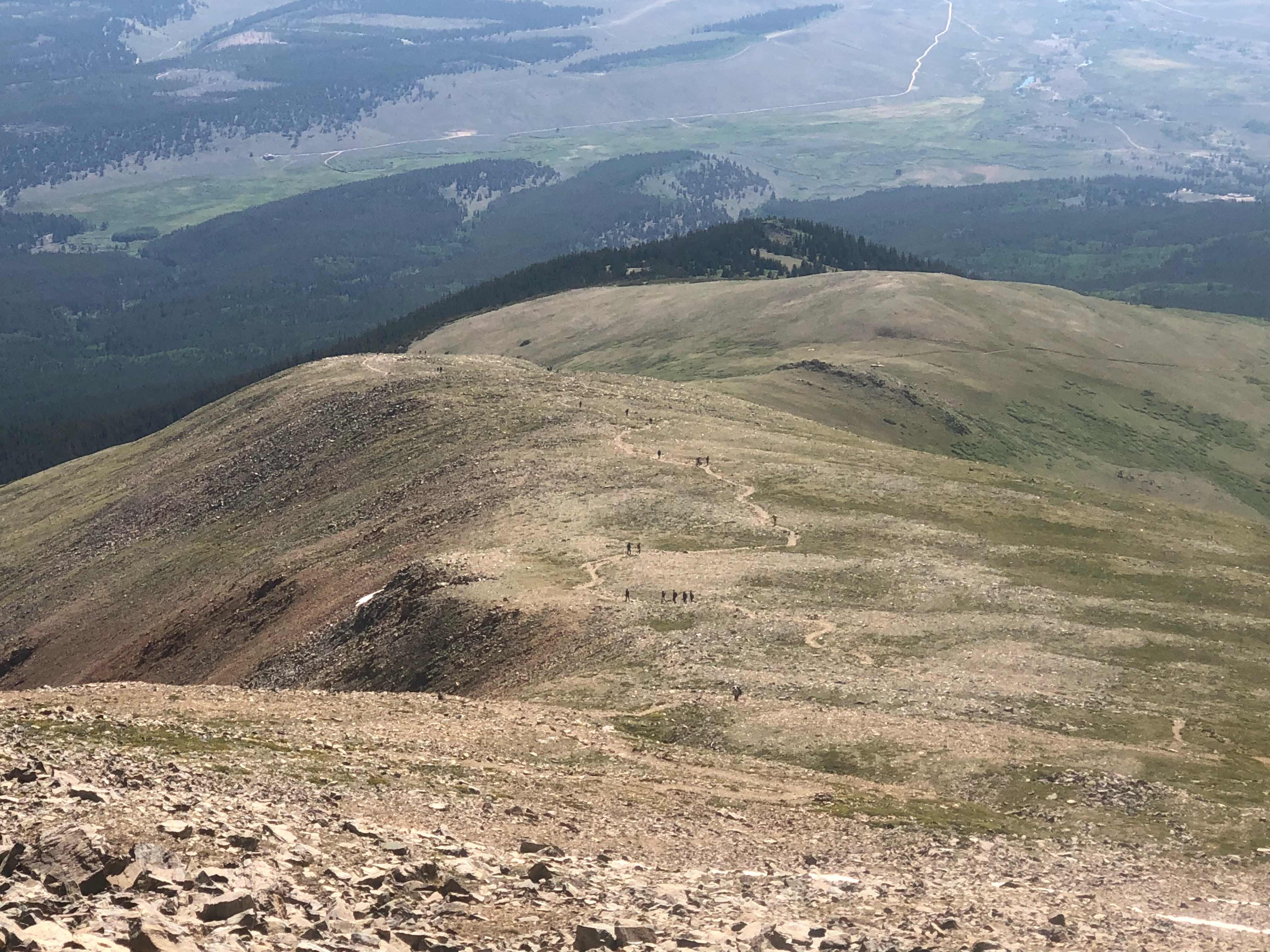 Almost to the top. Can you see all of the people making their way up 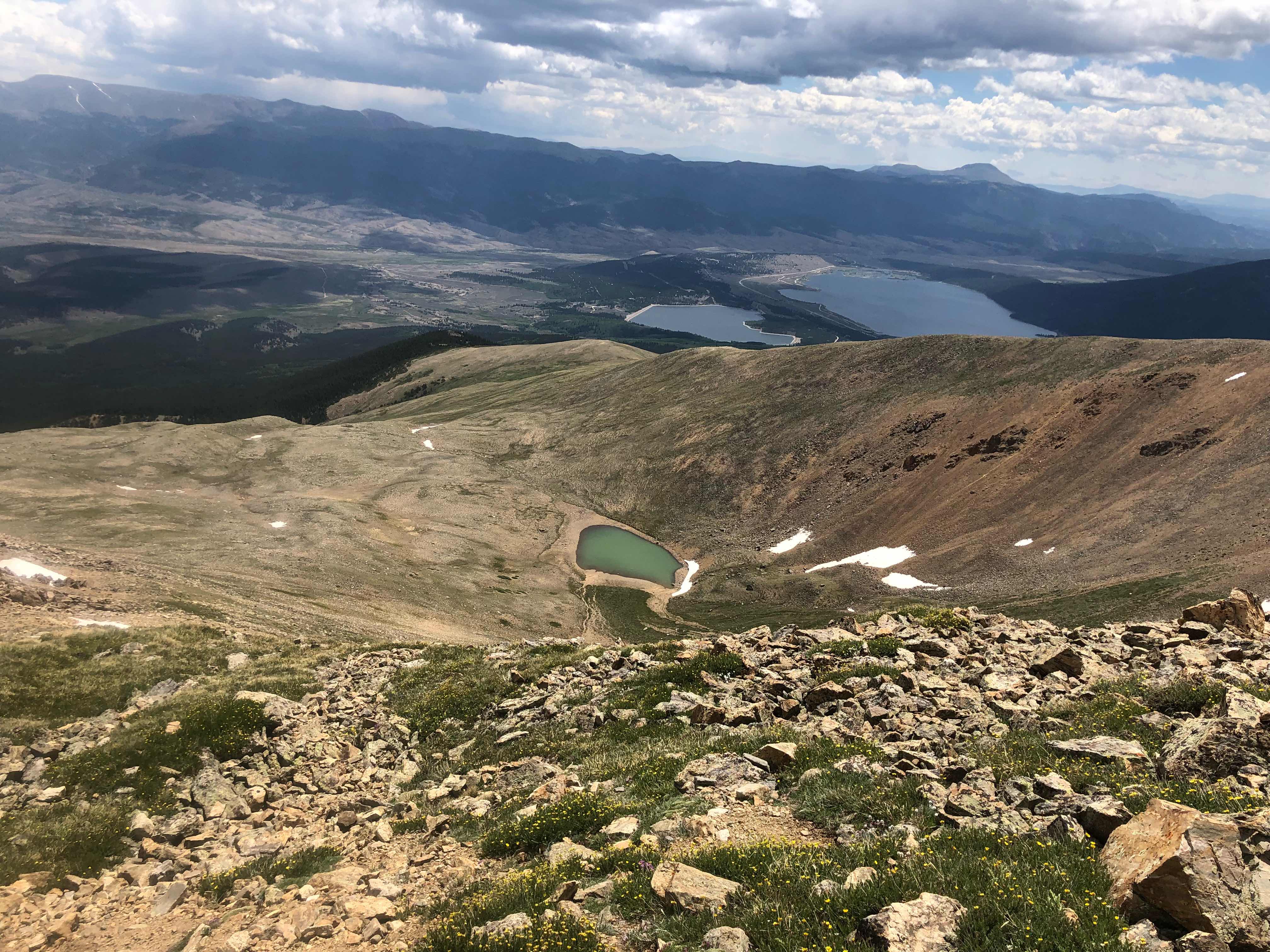 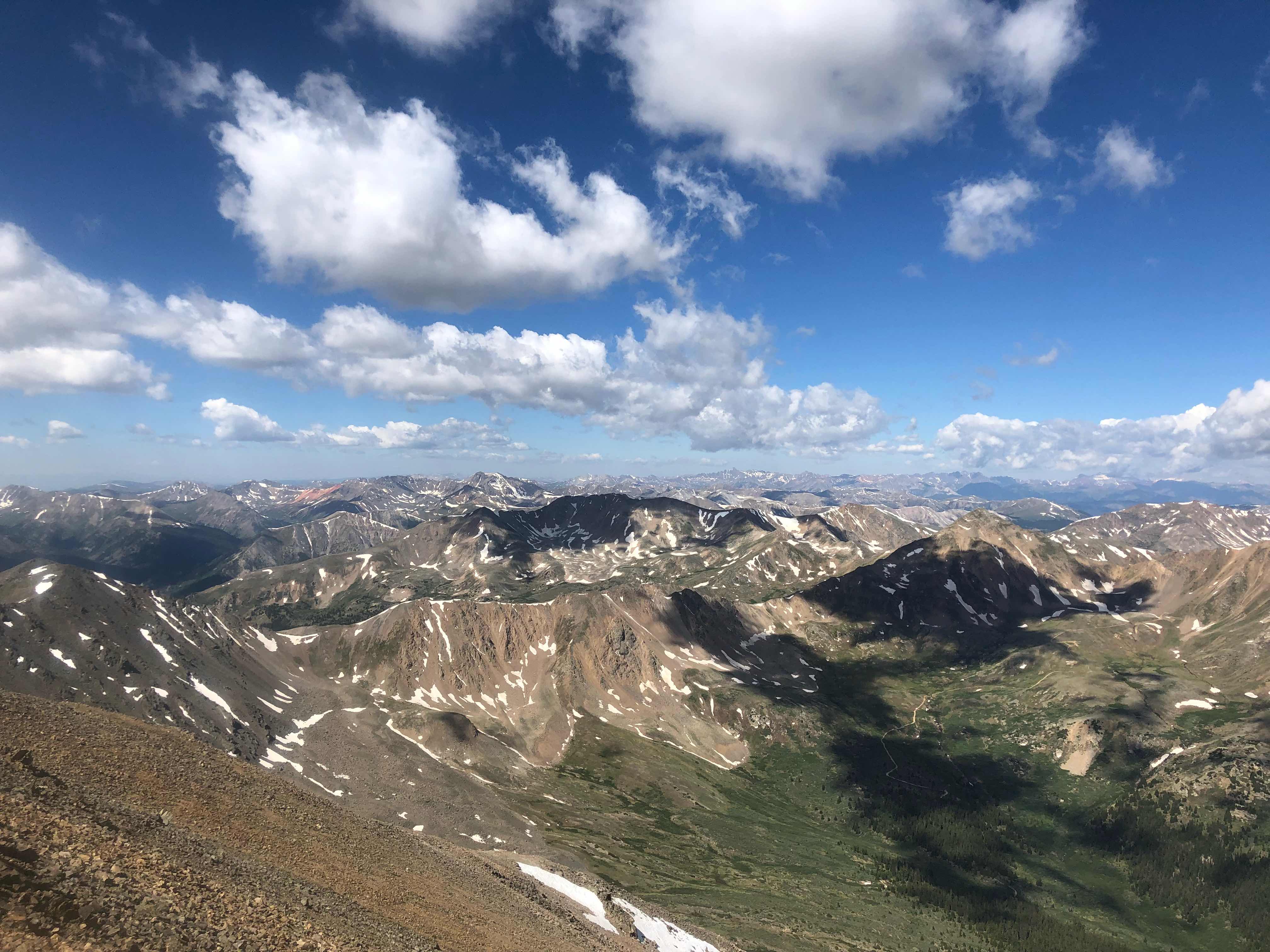 Look at all of those mountains

Another panoramic
I’m cowboy camping again tonight. Let’s hope for a better ending.
"We must embrace pain and burn it as fuel for our journey."
- Kenji Miyazawa