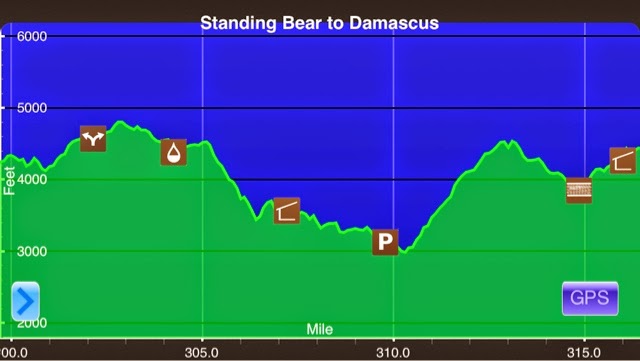 Before I tell you about today I need to backtrack to last night. After I finished writing my blog post I settled in to bed. I was almost asleep around 9:30, when I saw lights and heard engines approaching my campsite. This was disconcerting for two reasons. First, it was only the second time I've camped alone and secondly the AT is only for foot traffic. I'm very careful about where I choose to camp. I never camp close to roads because there have been reports of drunk locals hassling hikers. I was terrified thinking I was going to be molested. Three ATV's approached my campsite and I heard men talking and calling out. I answered by asking if I could help them. They said yes and then drove 25 yards past my hammock. They cut off their engines and I could hear them talking to each other, but they ignored me. I got out of my hammock and put my shoes on. I called out and asked if they knew they were driving on the Appalachian Trail. I got no response. I waited a few minutes to see what they were doing, but I couldn't tell. By now I was beyond freaked out, so I called out once again. I yelled, "you guys are freaking me out, what's going on?" They finally replied that they were with the local search and rescue team and were looking for an injured hiker. I was still weary, but not as concerned. I got back in my hammock and kept listening to them. About 10 minutes later the engines started back up. One of the ATV's drove past and the other 2 stopped by my hammock. A guy called out to me so I got up again. The first thing I saw was an ATV with Greenville Search and Rescue written on it. I was very glad to see that I wasn't going to be raped and murdered. He explained that a hiker had fallen and hit his head, but would be ok. They were sorry they scared the beejesus out of me. They also mentioned that this was one of the few parts of the trail they didn't need a helicopter to get to. I couldn't imagine how scared I would have been if a helicopter landed next to my campsite.
As you can imagine I didn't sleep very well after that. I didn't break camp and get started until 9. Today was a pretty easy hike. I only had one big climb, but it was spread out over a few miles. I stopped and had second breakfast(coffee and a pop tart) at the first shelter I came to. I had knocked out 6 miles in just under 2 hours. I was in the zone. The rest of the day flew by until I had a major shoe malfunction. 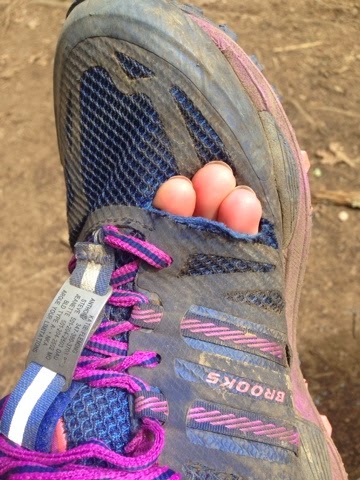 What started as a tiny hole quickly spread.
Overall, I have liked my Brooks Cascadia 10's, but this is getting ridiculous. I should be getting 500-700 miles out of them, but this is the second pair to crap out on me in just over 300 miles. A few hours later the second shoe blew out too. I'll be in town in 2 days, but Erwin, Tennessee doesn't have an outfitter. I'm not really sure what to do. I don't want to take another zero day, but I obviously need a new pair of shoes. For now I have repaired them the only way I know how. 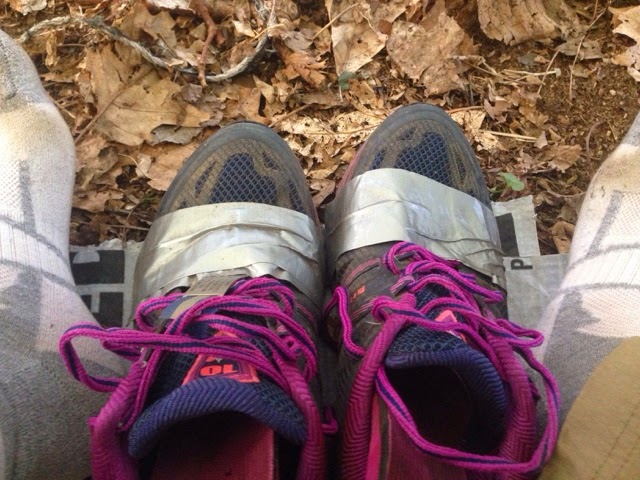 Duct Tape fixes everything, right?
Hopefully this will allow me to get into town and figure it out. I used all of my duct tape so it had better work.
Just after my first shoe ripped out I came down from a long decent onto a road. There was only one car parked there, but it had a great license plate. I couldn't resist taking a picture next to it. 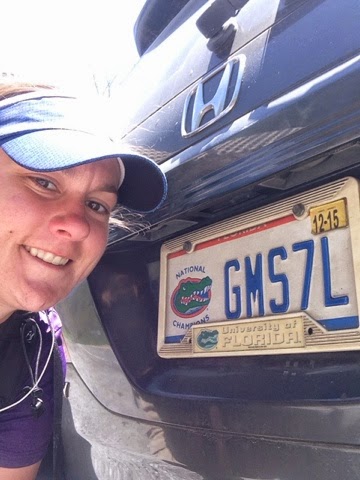 Go Gators
As I began the long extended climb up a mountain I was greeted by, "Go Gators" the owners of the car were out for a day hike. The daughter went to school at UF. I didn't get the rest of their story because I was in the middle if a difficult uphill and couldn't really stop and chat, but it put a smile on my face to see a member of the Gator Nation out for a hike.
After my long uphill climb I was greeted by another spectacular view. It really never gets old seeing the appalachian mountain range spread out before me. 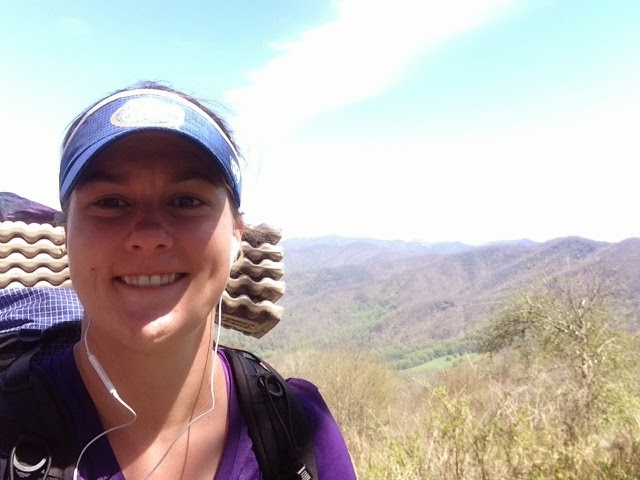 Earlier in the day I passed the Shelton Gravesites. They were about 25 yards off the trail on a blue blazed trail. I'm glad I took it, the gravestones looked really old, but are still maintained. I think I know the story behind them, but I'm sure Aunt Liz will correct me if I'm wrong. Two civil war era brothers from the north were visiting family in the south, they were caught by some confederate soldiers and hung. Descendants of the brothers still maintain the gravesite. 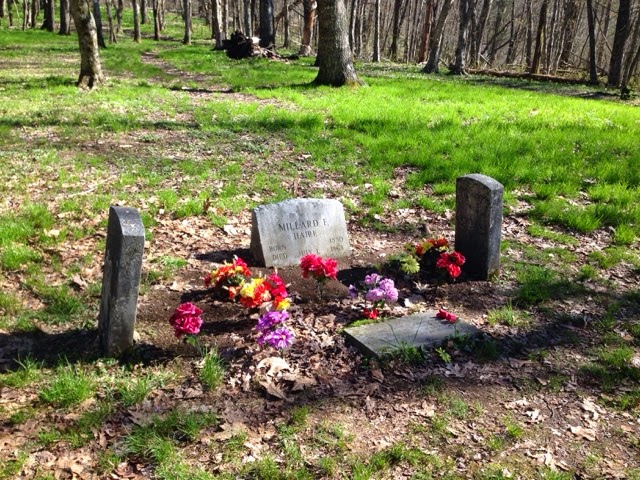 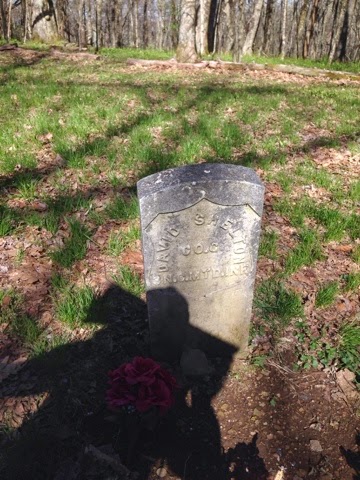 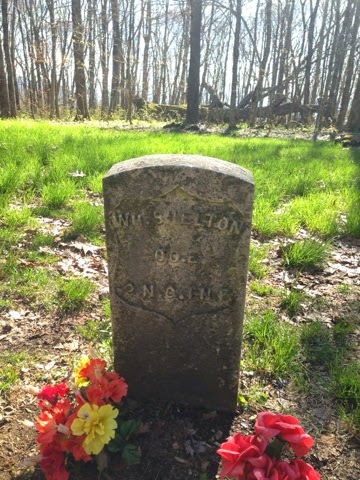 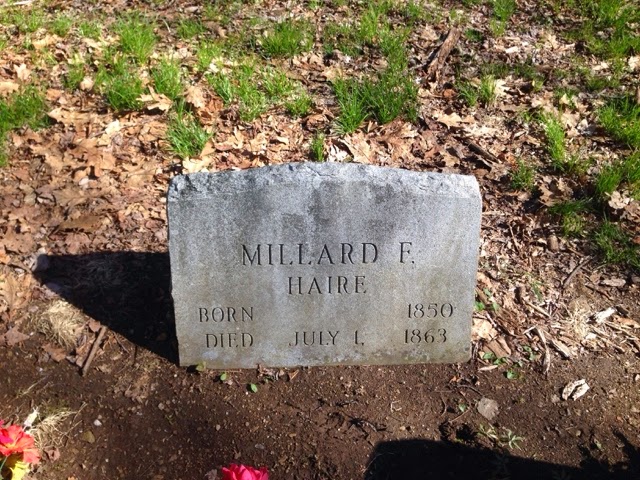 Not sure about this gravestone
I know I've mentioned the stark contrast in greenery between different elevation levels, but I finally got a picture to help explain what I mean. 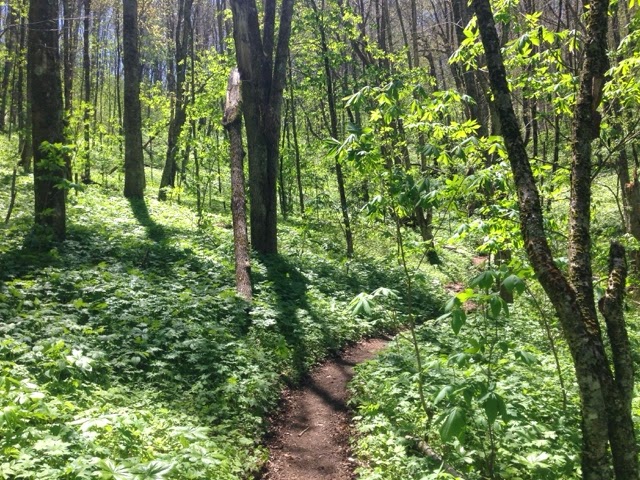 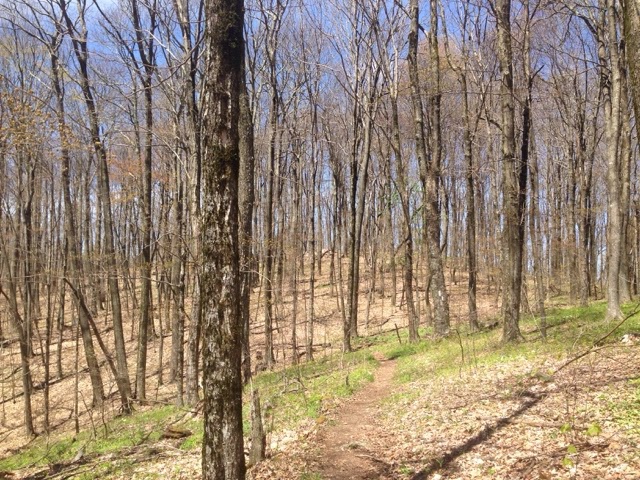 4,300 feet
Since my shoes crapped out on me I stopped short today. I was hoping to do 18-20 miles today, but I only did 14. I ran out of duct tape to fix my shoes so I stopped in at a shelter to see if anyone had some extra tape. Bernard, a thru-hiker I've recently been flip flopping with came to the rescue. 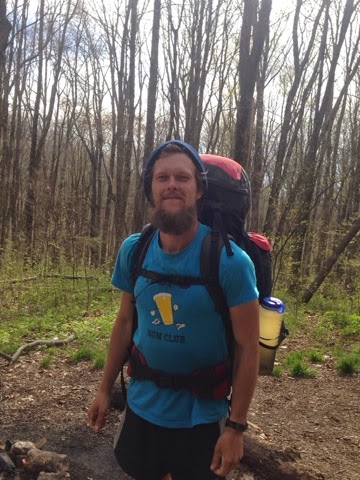 Bernard
I gave him the rest of my water in exchange for the duct tape. The water source at the shelter was .4 mile straight downhill. By the time I had filtered water and gotten back to the shelter it was almost 5, so I decided to call it a day. This shelter is pretty full. There are probably 12 other hikers here. A few people I know, and a lot of new faces. Four of the guys are knocking out 20-26 mile days, the kicker is three of them are in their 60's. Wow, that impresses me.
It's supposed to rain overnight and on and off during the day. Hopefully that won't be accurate, but I guess after 3 days of pretty spectacular weather I'm do for some rain.
“You’re braver than you believe, and stronger than you seem, and smarter than you think.” – Winnie the Pooh
Posted by Yoda at 6:55 PM