I’m really pleased with the new cold weather gear that I added to my pack for Colorado. I was able to cowboy camp last night even though the temperature was 38 degrees. My new four season sleeping pad is awesome. I’m also liking my new thermal Patagonia base layer and SmartWool beanie. The only problem I had was convincing myself to get out of my sleeping bag when my alarm went off. Mangas didn’t make it as far as Turtle and I did last night. I took my time leaving camp hoping that he would catch up, but he didn’t. The morning started off with a gentle climb and I was able to start taking off layers as I warmed up. Mangas’s wife, Julie is resupplying us at our next stop, Stoney Pass. This saves us the trouble of having to hitch into Silverton. With Mangas somewhere behind me it doesn’t make since to hike big miles. I knew I could take it easy today and enjoy the scenery. I ended up taking a lot of breaks. Each time I stopped I hoped to see him behind me. 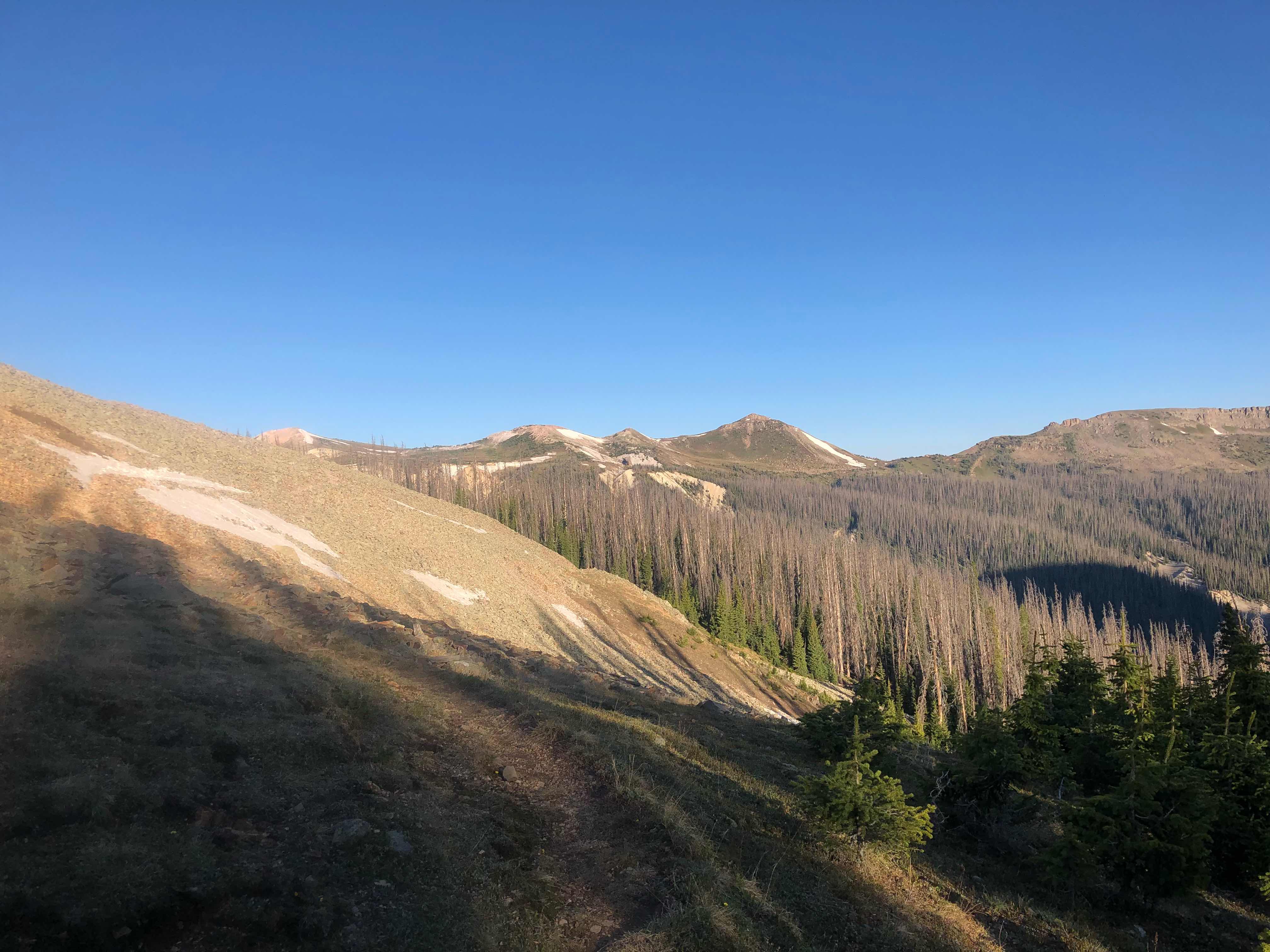 Early morning view
After spending almost two weeks at lower elevation in Wyoming, I’ve really been feeling the high elevation. I spent most of the day between 11,400 and 12,800 feet. I had a noticable drop in my energy level and appetite. I’m hoping that my body readjusts soon. It didn’t help matters that most of the uphill today was short and steep. Hiking today reminded me of the climbs I did on the Appalachian Trail. Usually I enjoy this type of hiking, but my decreased energy made it a little less enjoyable. On the upside the scenery today was breathtaking. I was above tree line for most of the day. I had panoramic views of the San Juan Mountains. It was a good thing I wasn’t trying to make mikes, because I just wanted to stop and smell the roses. 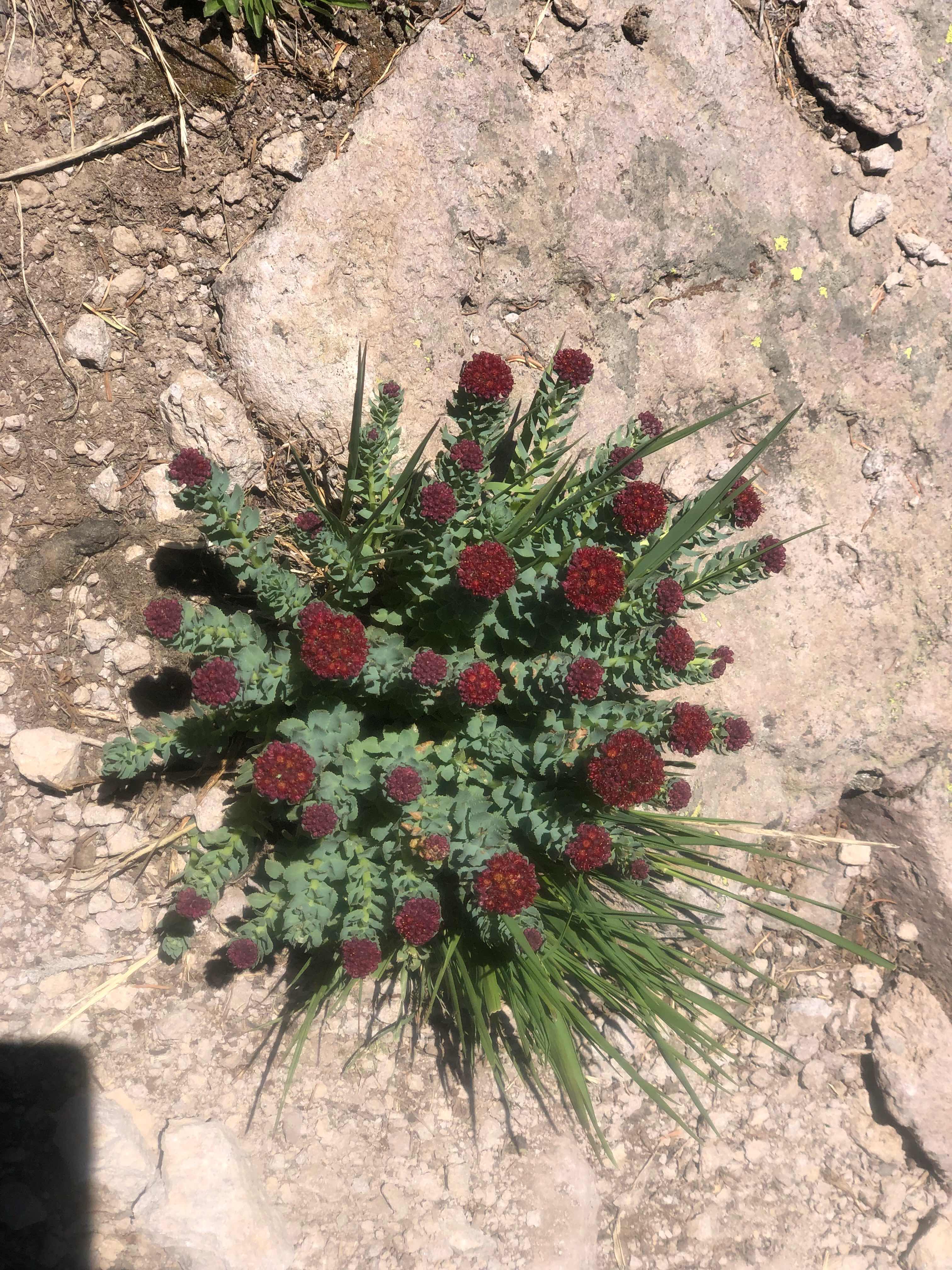 No roses, but I did come across some Queens Crown 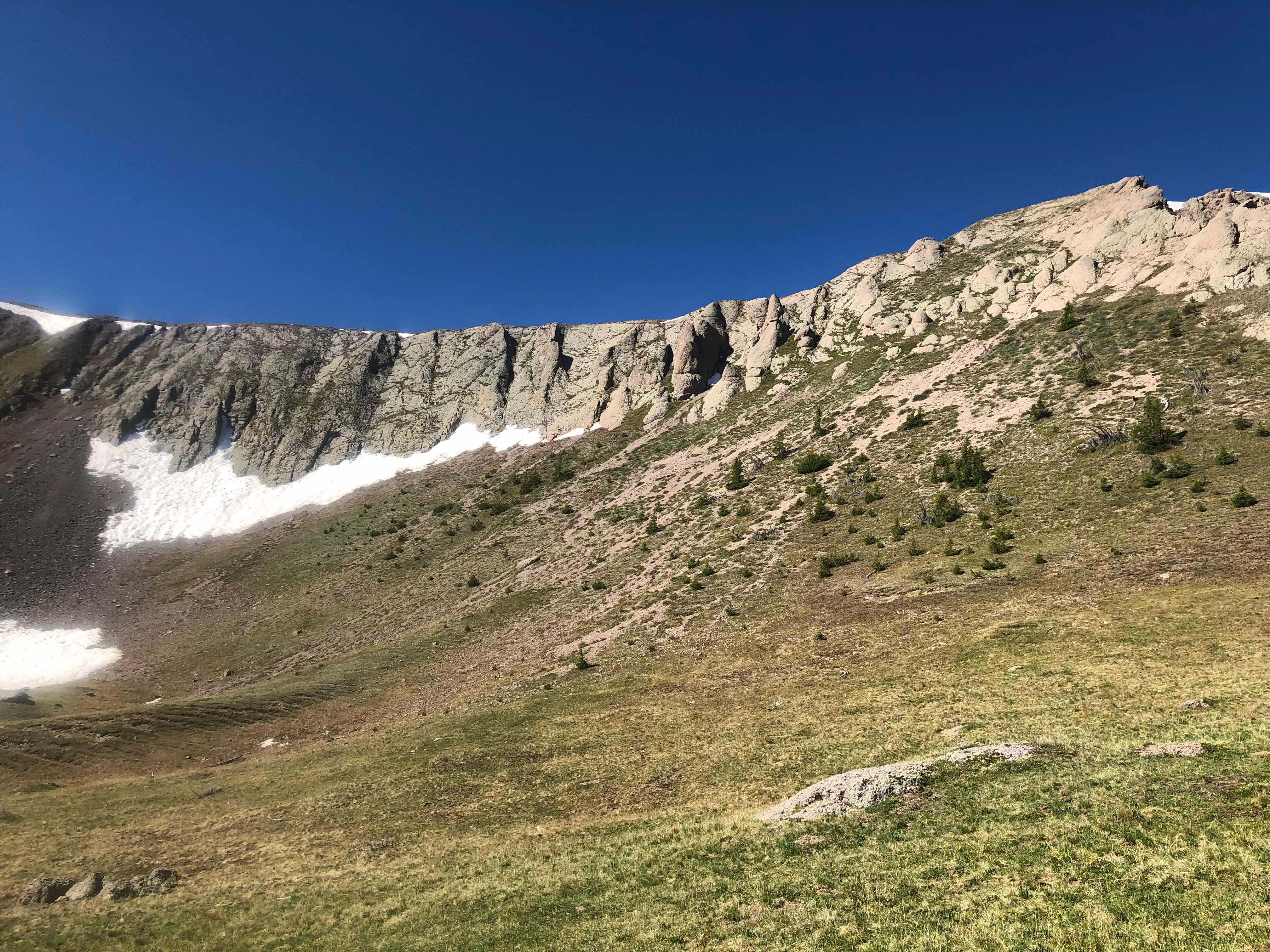 Cool ridge
I encountered more snow today, but none of it was a concern. All of the snowfields and traverses were easy and I never needed my ice ax or microspikes. I just made sure to take my time and actually liked the different terrain. 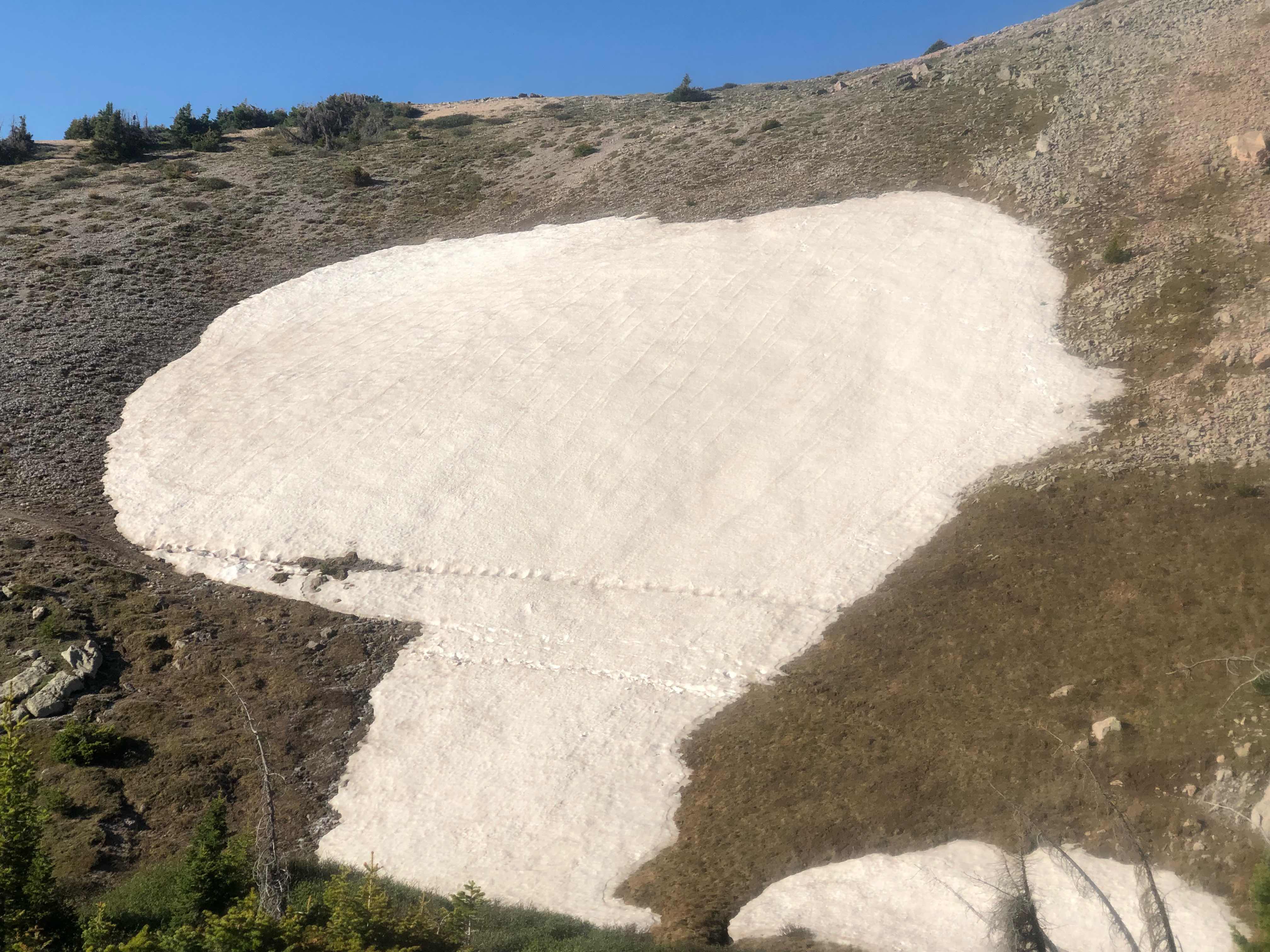 Longest traverse of the day(easy peasey) 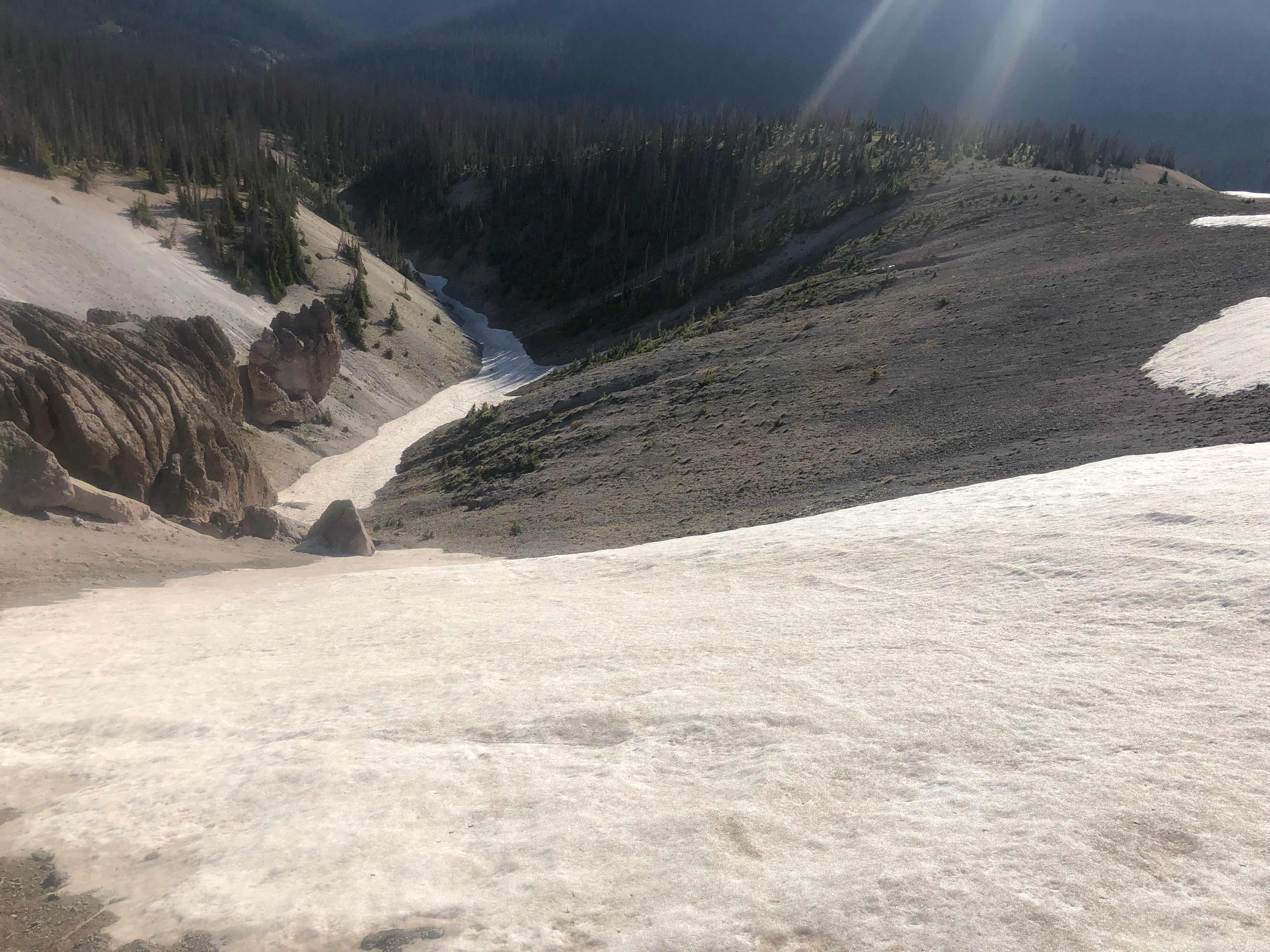 No fall situation, but an easy traverse
I was a little concerned about a section later in the day called Knifes Edge. I have encountered several Knife Edges in my hiking career. Typically they are dangerous sections and tend to make my butthole clinch. You definitely need good weather and good trail conditions. This particular section would be above 12,000 feet and a north facing slope. Usually the north faces have a lot more snow and since I had seen more snow today than yesterday it was a definite concern. I knew I wouldn’t get there until the afternoon, so I tried not to worry about it. Instead I just enjoyed the hike. 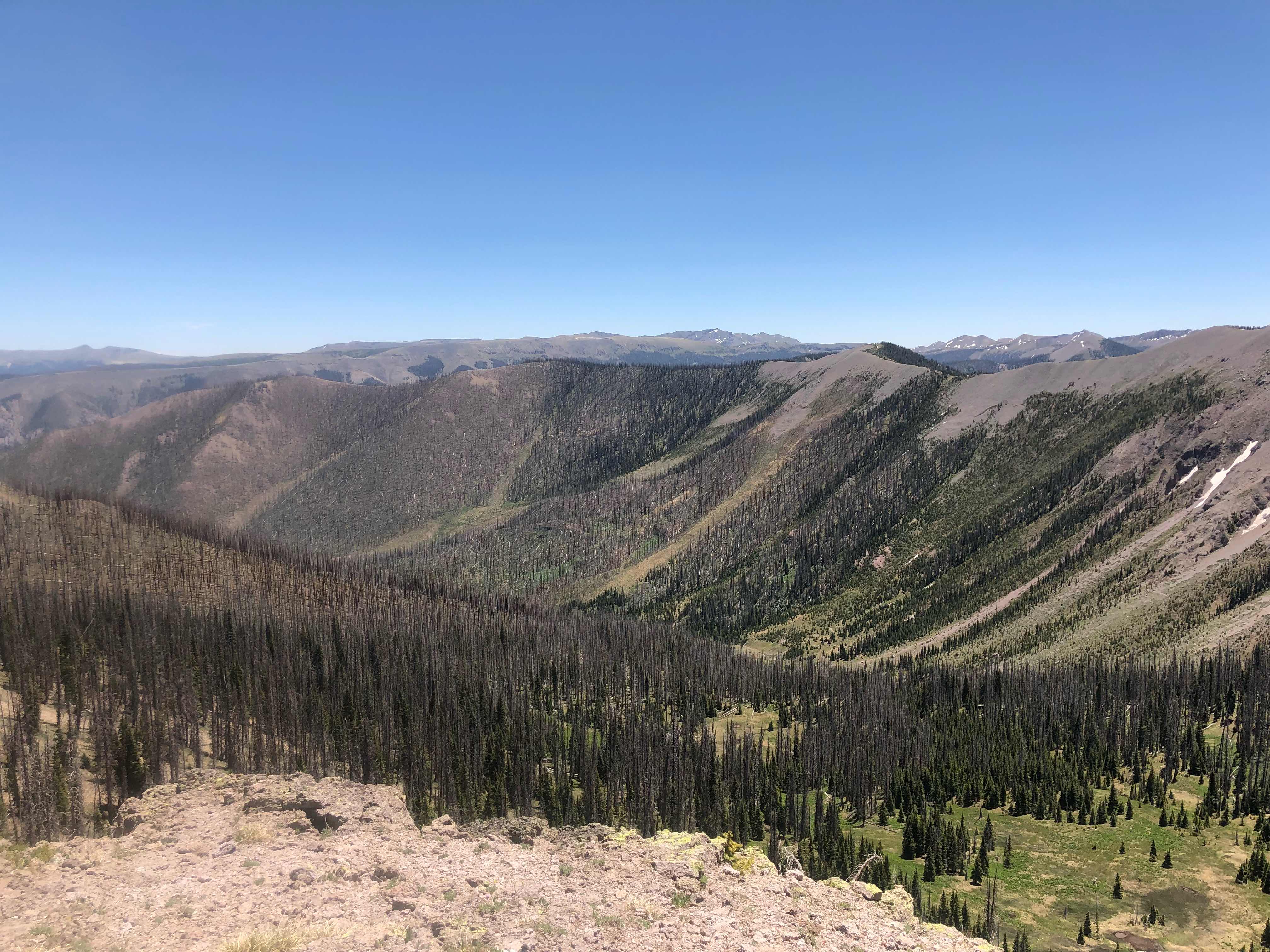 Large area of Beetle Kill Pine trees
I hiked on top of a few ridges. I could see exactly where the trail was going for miles. The wind had really picked up and I was fighting to stay on course. It made for an interesting afternoon of hiking. I got really good at finding natural wind breaks before stopping for a break. 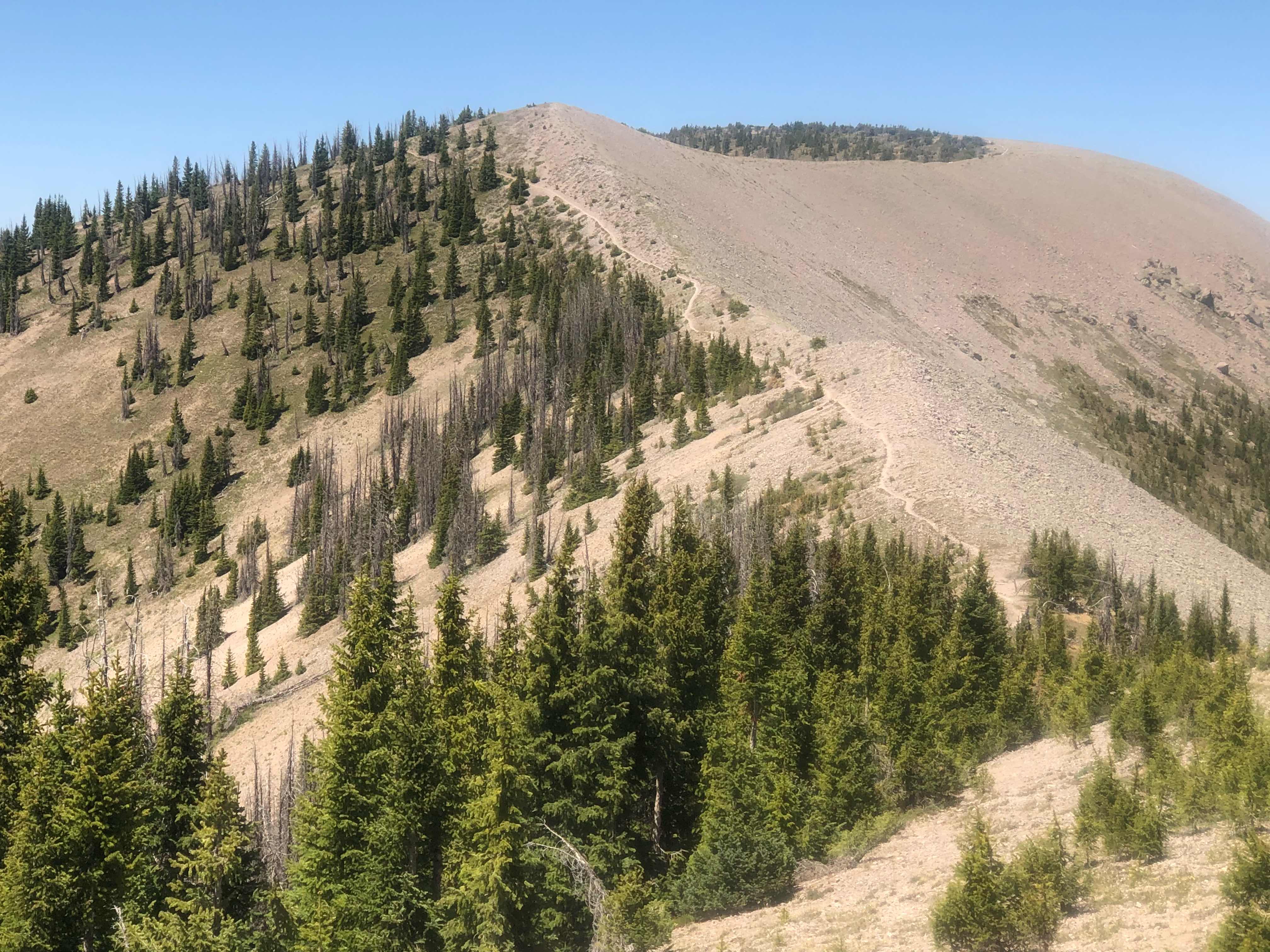 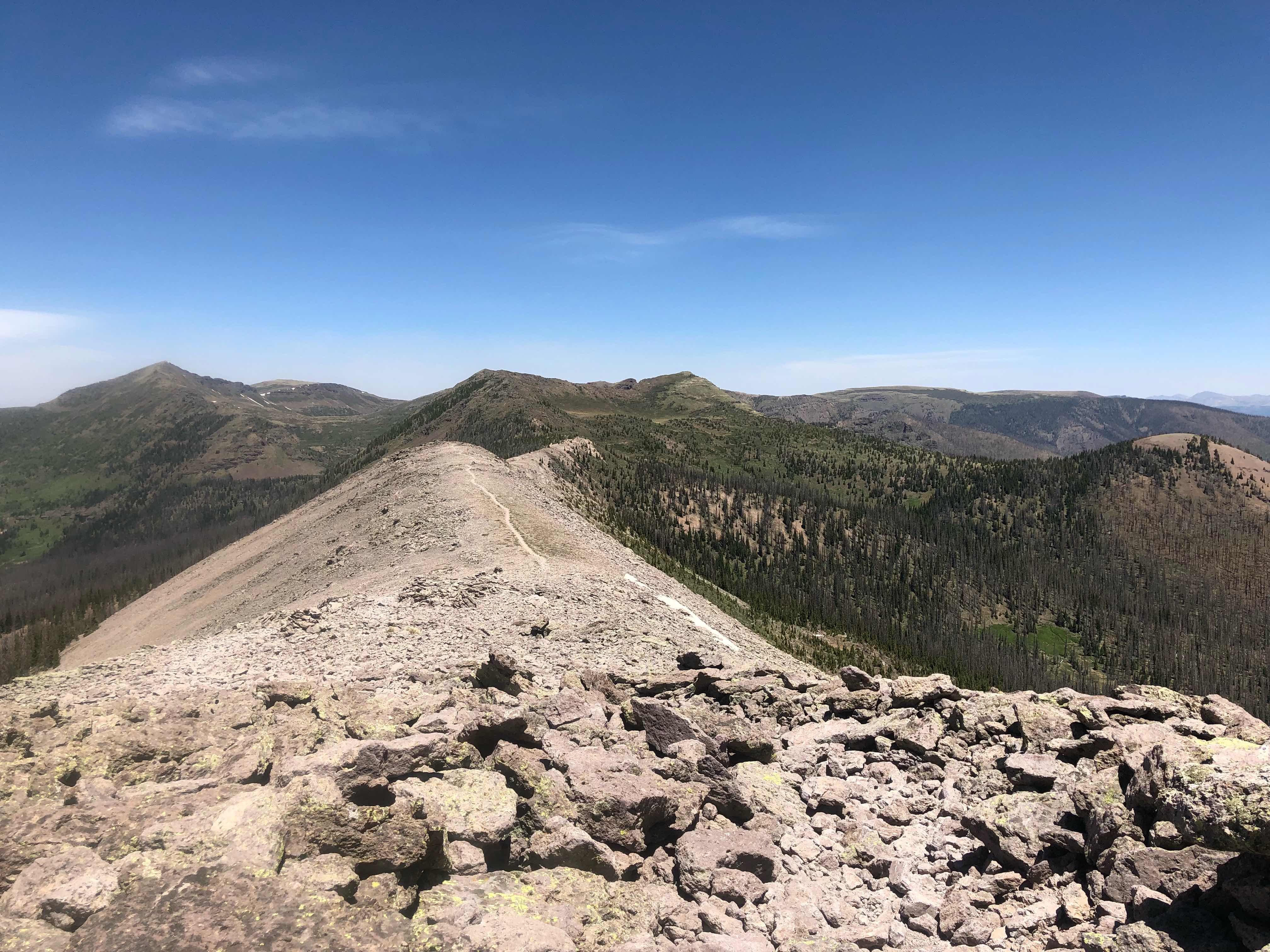 Not a great spot for 15-30 mph wind
Around 1:00 I finally got to the Knifes Edge. From a distance it didn’t look like anything scary. The snow was almost nonexistent. I was very relieved. I had gotten ahead of Turtle first thing this morning. No matter how many breaks I took he never caught up. I had planned on waiting for him before going across Knifes Edge alone, but since there was hardly any snow I did it by myself. It was a really fun section and I never felt out of my comfort zone. I had hiked a few areas similar to this on the PCT. I remember all of those sections pushing me to the edge of my comfort zone. I was round of myself for feeling so confident through this section. 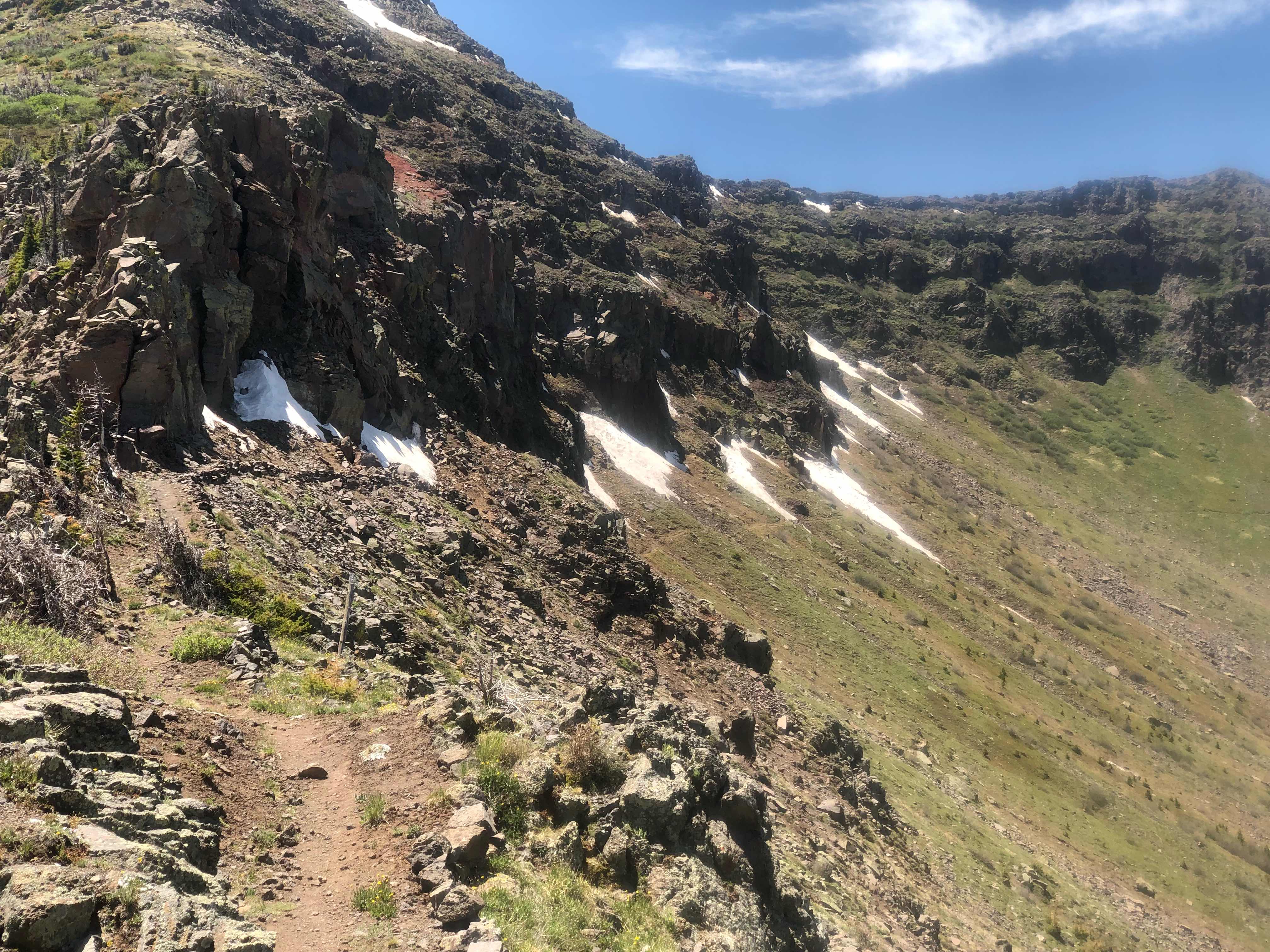 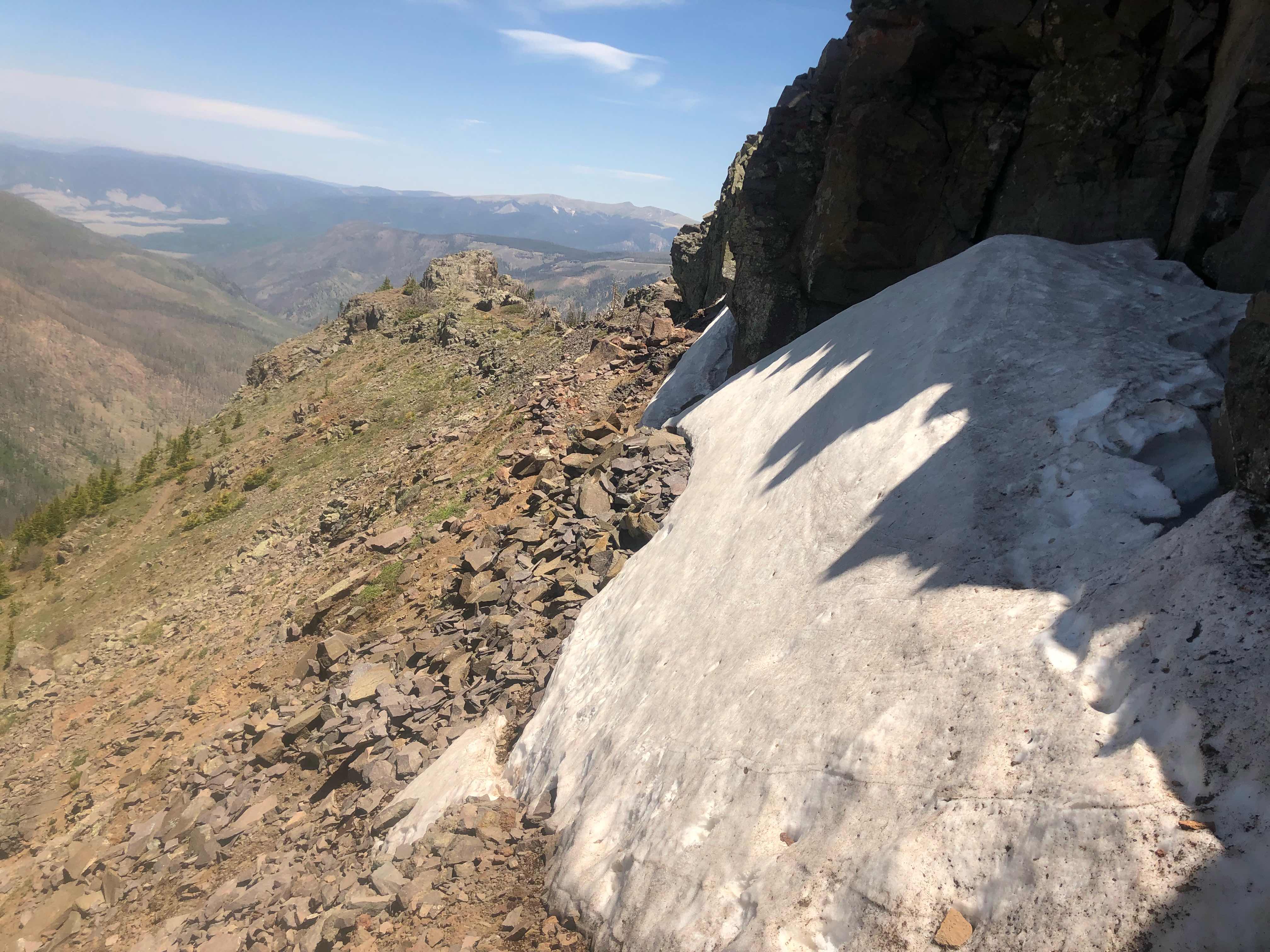 Small traverse where I could go below the snow 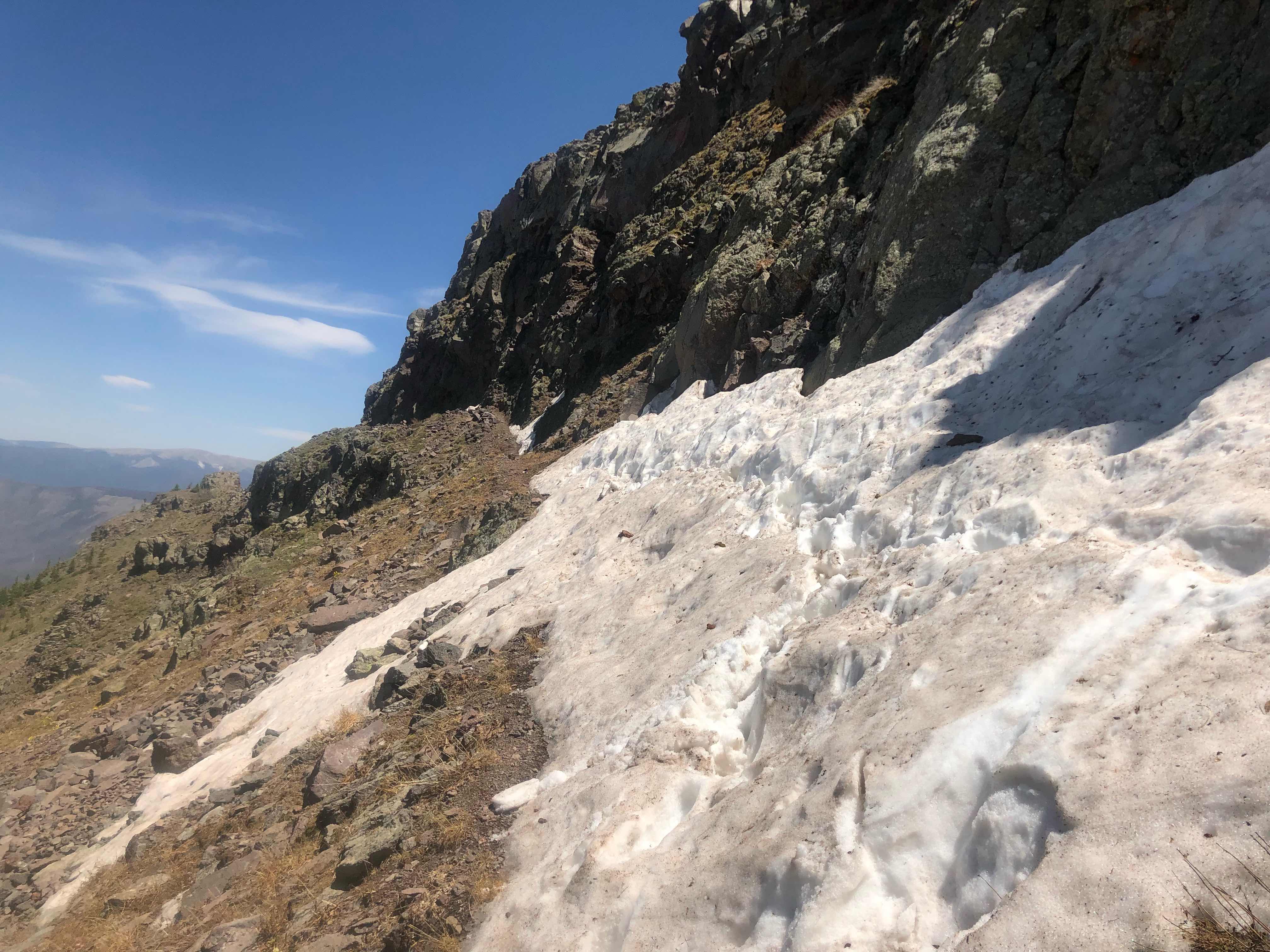 Had to go through the snow, but there were other people’s foot prints that I could stay in 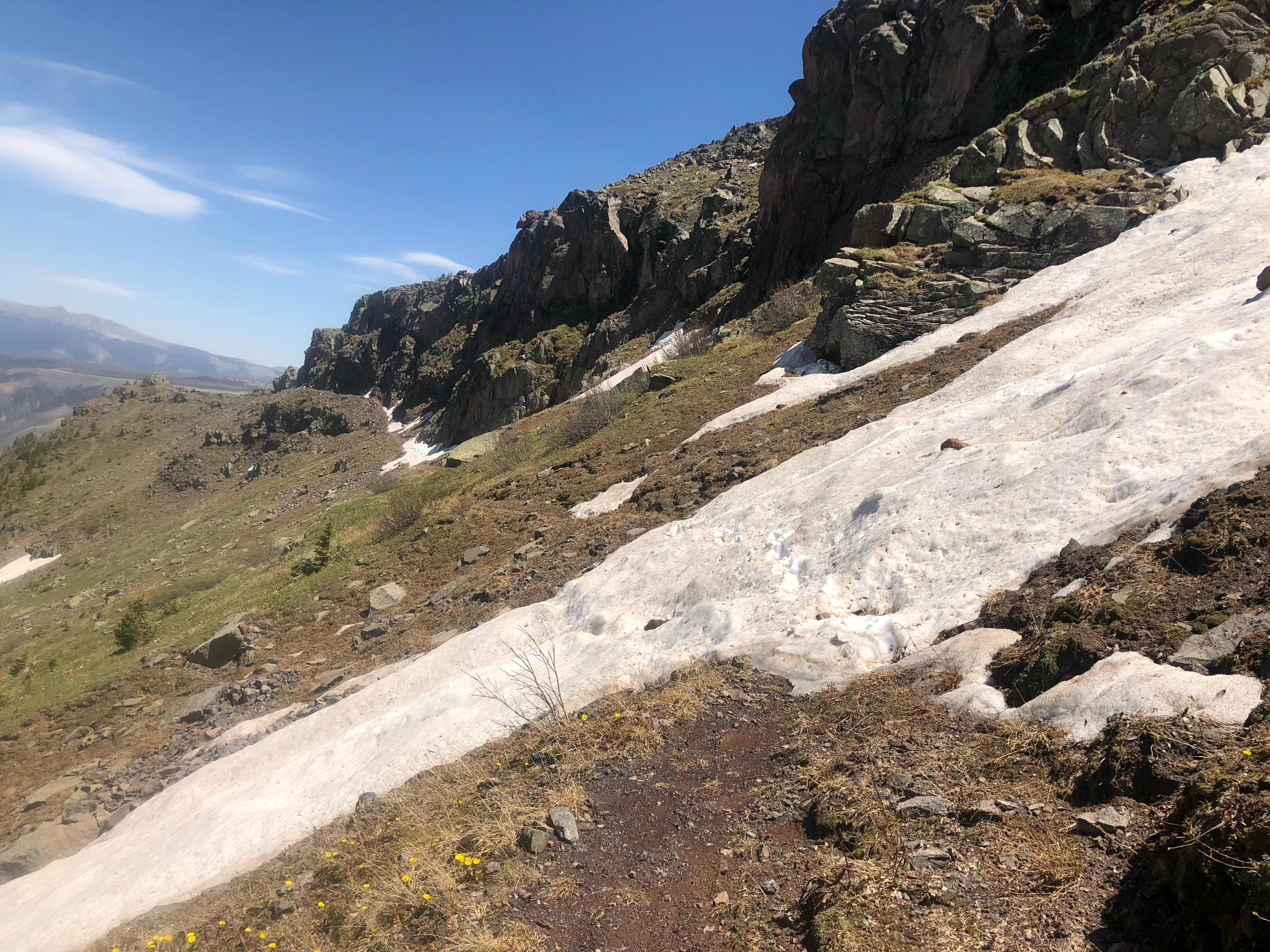 Through the snow again, but super easy
The entire section lasted about a mile. I felt more comfortable going across the snow than I did going across some of the rocky sections. The rock would shift under my feet. Sometimes my foot would slip and send rocks tumbling down the mountain. I took my time through it all and I found the experience to be fun. 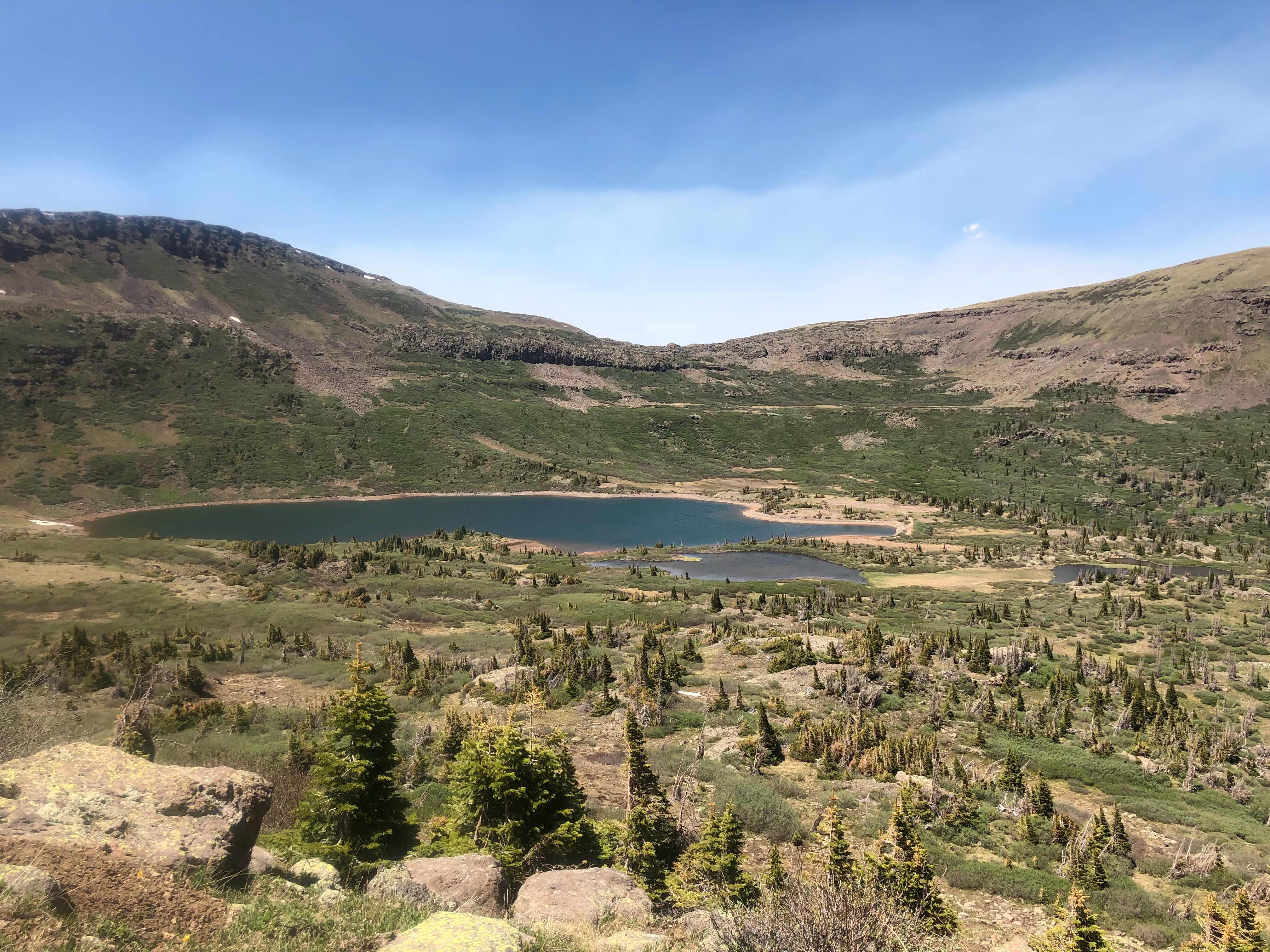 Sweet view at the end
Shortly after crossing the Knifes Edge hiking conditions took a turn for the worse. I believe I talked briefly about the 416 wildfire the other day. The fire is staying away from the trail so far, but the winds are pushing the smoke into the area. I spent the next 6 miles walking through heavy smoke. The entire area was downright smoky, with a very strong smell. It didn’t bother my lungs too much, but it really messed with my eyes. 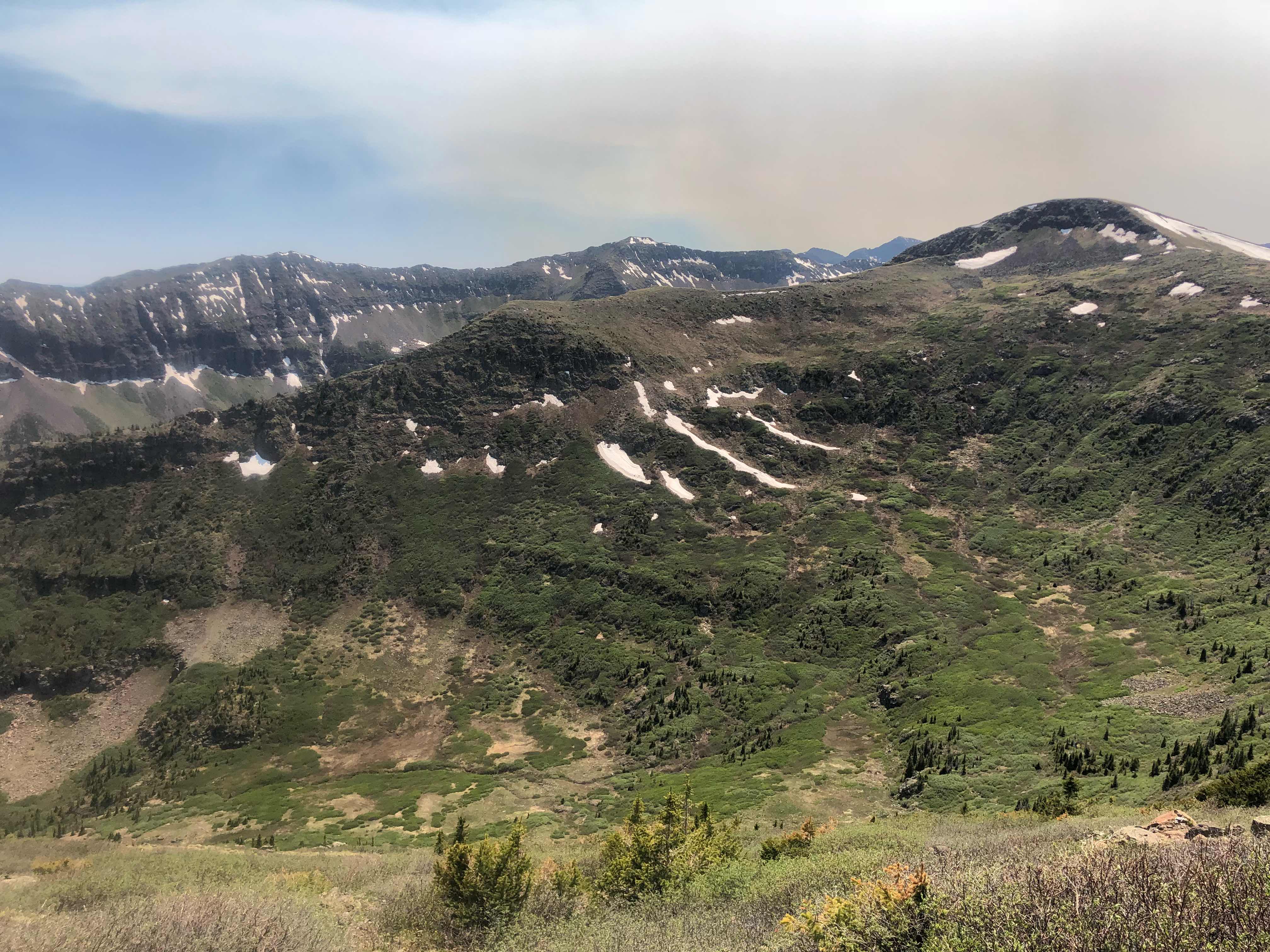 Not too bad yet 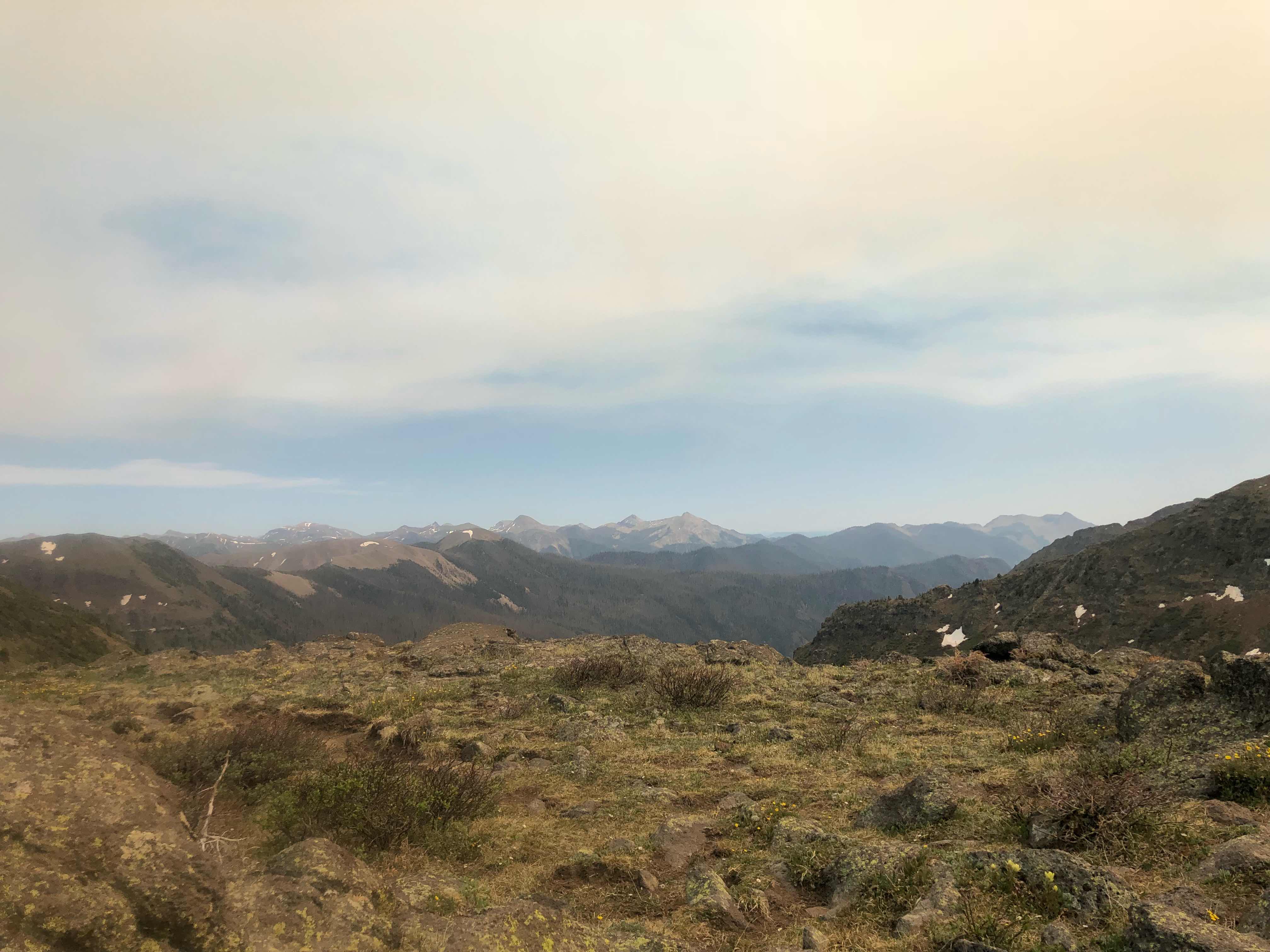 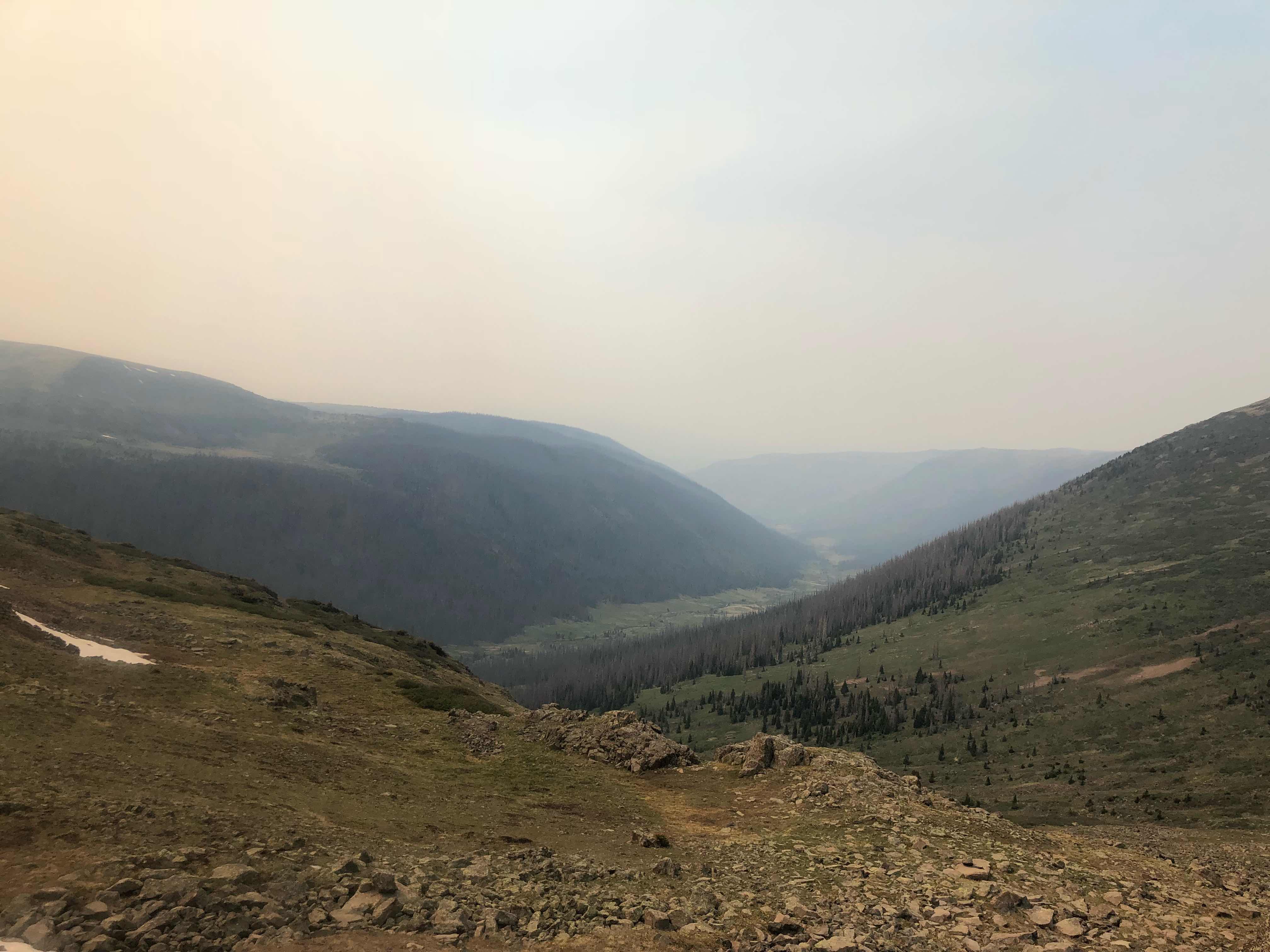 A few minutes later
As the wind speed increased s did the smoke. Eventually it was surrounding me. It seemed to be at its worst when looking to the northwest. I had a 800 foot climb over 1.3 miles. I had to put my buff around my mouth to keep from breathing in a ton of smoke. Breathing in big lung fills of the smoke eventually irritated my throat and produced a dry cough. I’m hoping the wind changes direction tomorrow. I don’t want to spend an entire day hiking through the smoke. As Smokey the Bear would say, “Only you can prevent forest fires.” I encourage everyone to be especially careful when out in the wilderness during dry conditions. Colorado, New Mexico, Arizona, and California are all under red flag conditions and a draught. Educate yourselves before heading into the great outdoors. It only takes one person being careless to threaten homes, businesses, and the wilderness. 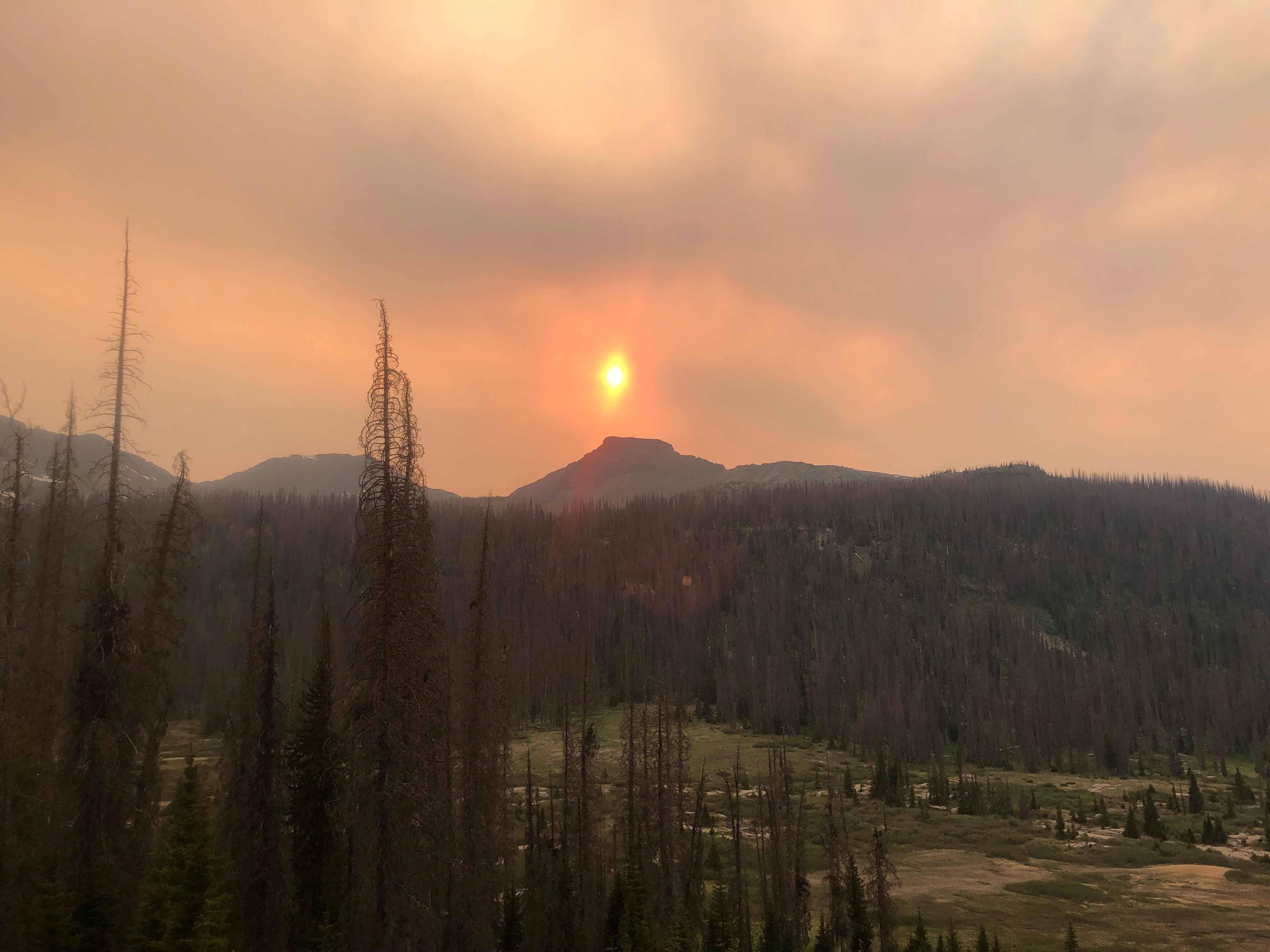 The smoke did make for a few really cool pictures 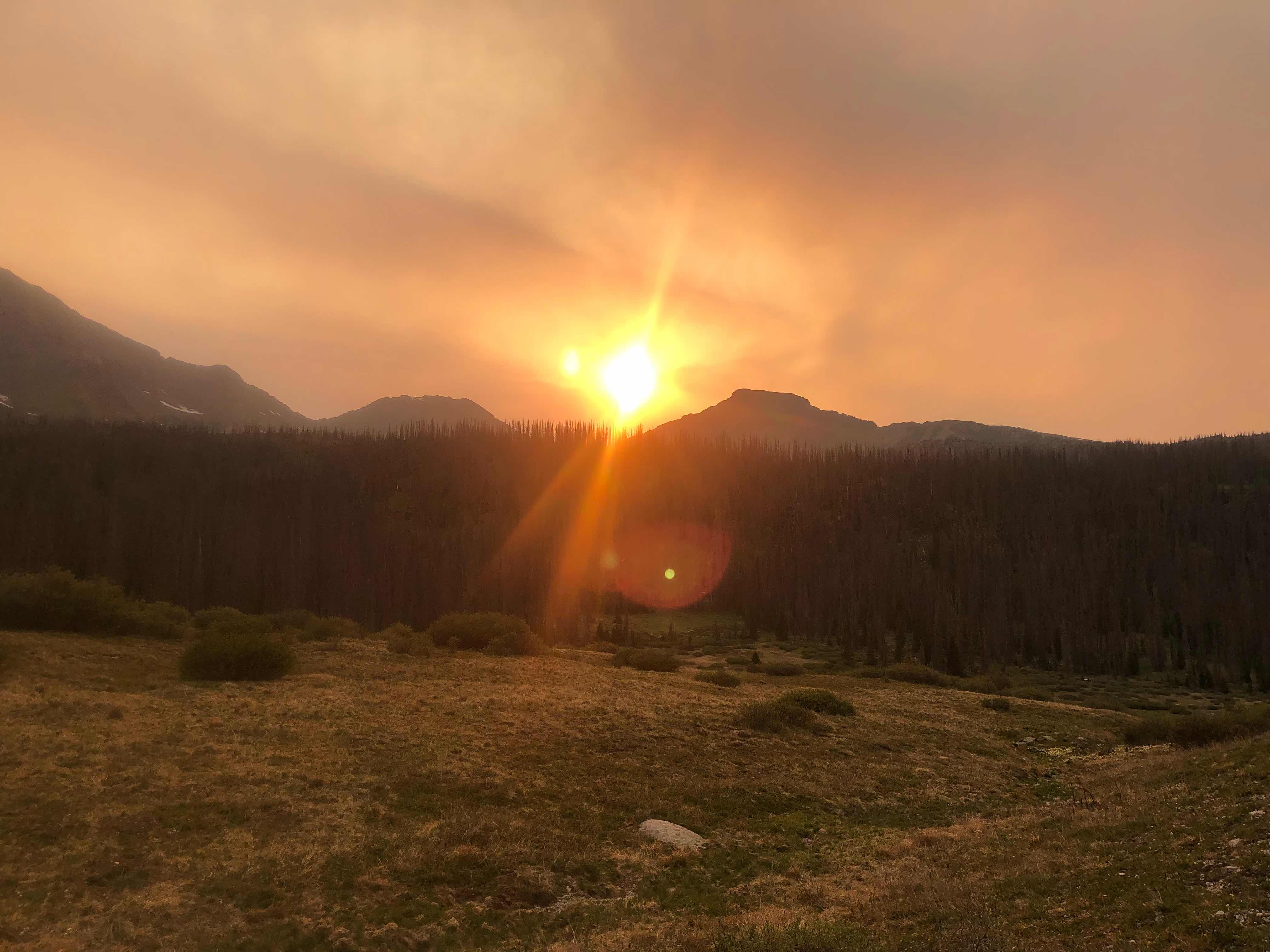 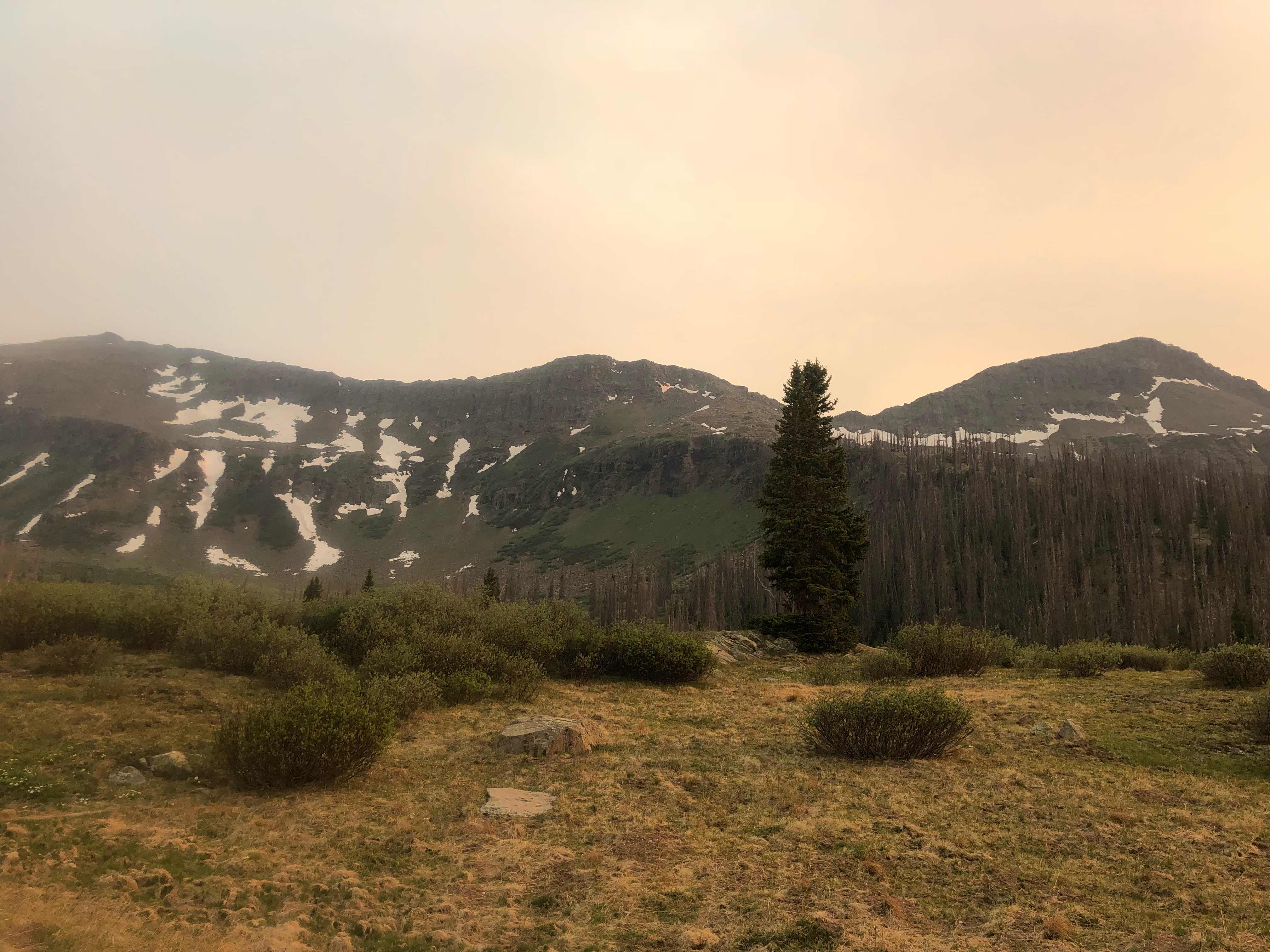 View from camp
Tomorrow promises to be another challenging, but rewarding day
“If you aren’t in over your head, how do you know how tall you are? - T.S Eliot