I think I jinxed myself yesterday. I was just talking about how warm I’ve been staying at night with all of my extra gear. Well, last night got really cold. I woke up around 3am shivering. I had frost on my sleeping pad and sleeping bag. My morning coffee drink had ice in it. It took longer than usual to convince myself to get up and get moving. I had a 900 foot climb right out of camp. I knew I should have taken some of my layers off before starting, but I just couldn’t do it. Within 15 minutes of starting, I had to stop and take my puffy of. Twenty minutes after that I had to stop again to take off my base layers. I felt much better this morning even after not sleeping well. I’m finally starting to fully adjust to the elevation. 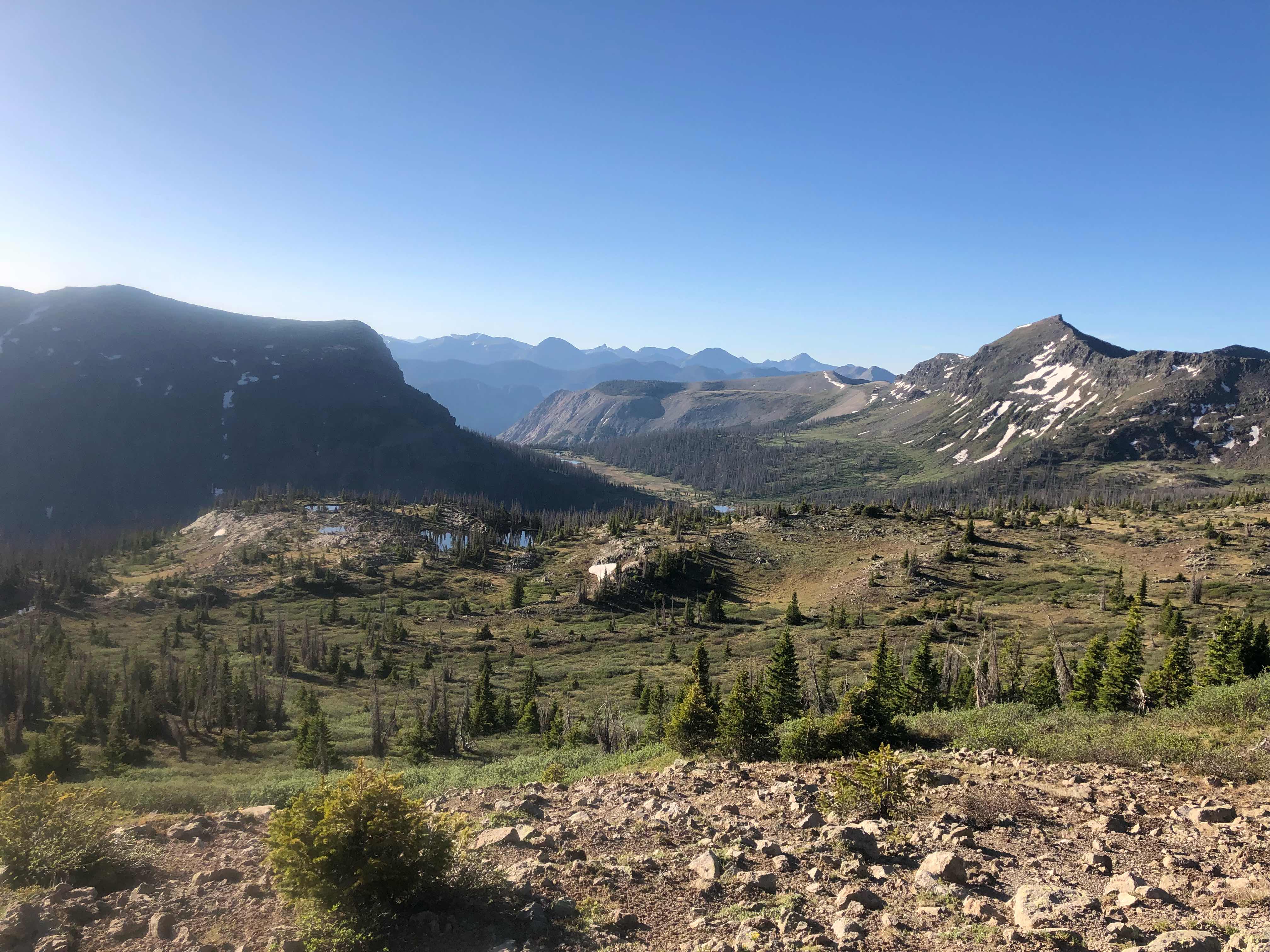 Halfway up the climb
Mangas is still behind us, so I wasn’t in a huge hurry today. I kept hoping that he would catch up, but there is still no sign of him. He has different shoes than most hikers and I kept seeing footprints that look like his. The only difference is he wears size 14 Brooks Cascadia trail runners and the prints I kept seeing can’t be bigger than a size 11. I ran into a southbound section hiker and he was pretty sure that Mangas isn’t in front of me. My best guess is that he is just a mike or two behind every night. I plan on camping at Stoney Pass tomorrow night. I’ll either see him that night or in the morning.
Shortly after the first climb I crossed and area full of talus(rocky area). As I was hoping from rock to rock, I saw movement out of the corner of my eye. I spotted a marmot. He just sat there staring at me. I got a really good picture. Up until today I haven’t seen much wildlife. 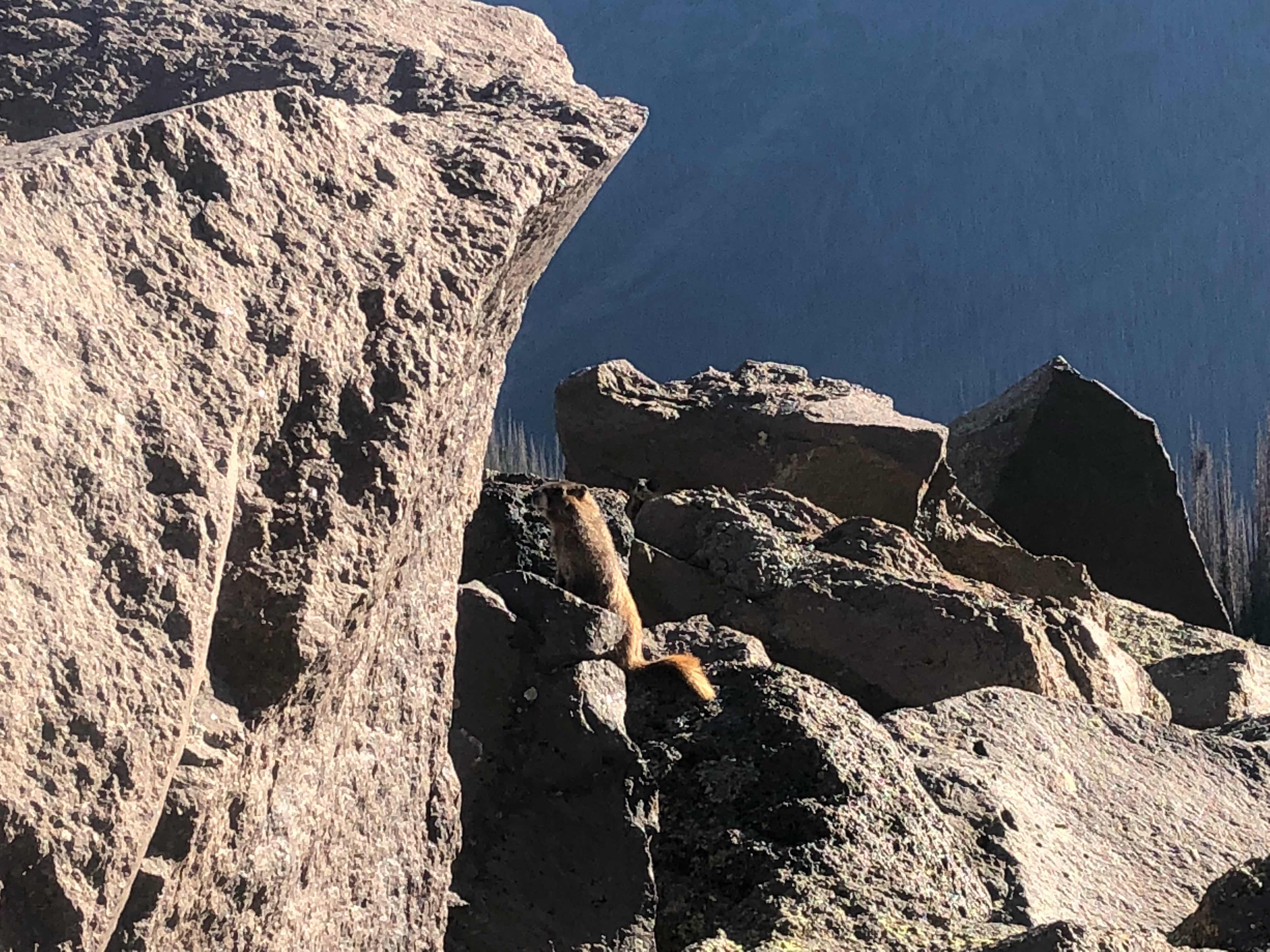 Marmot striking a pose
After the first climb the trail dropped back down to the same elevation I started out this morning. Then it climbed up even higher. In about 6 miles I gained a total elevation of 2,800 feet. I preferred the long sustained climbs of today, to the short steep ones yesterday. 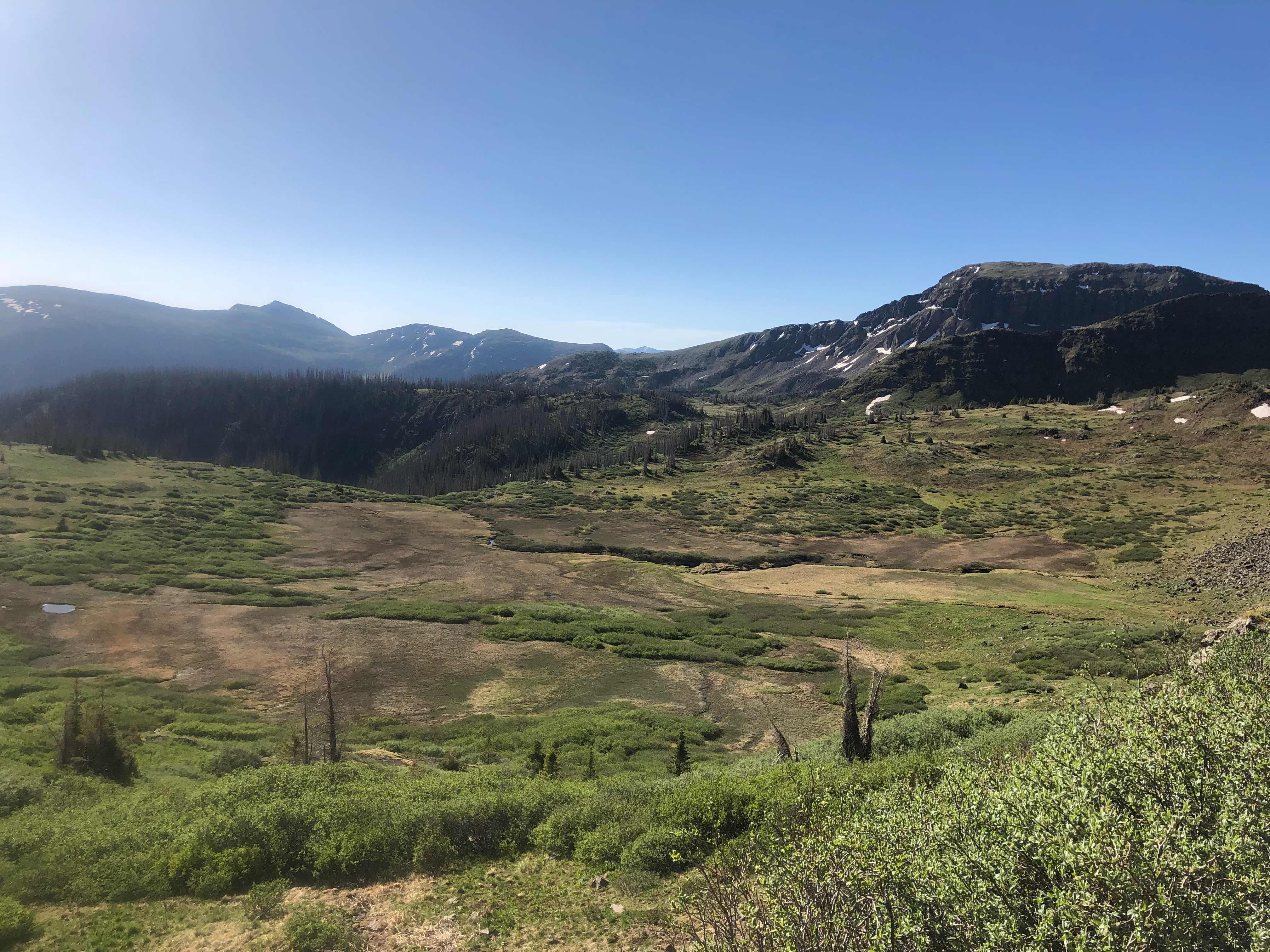 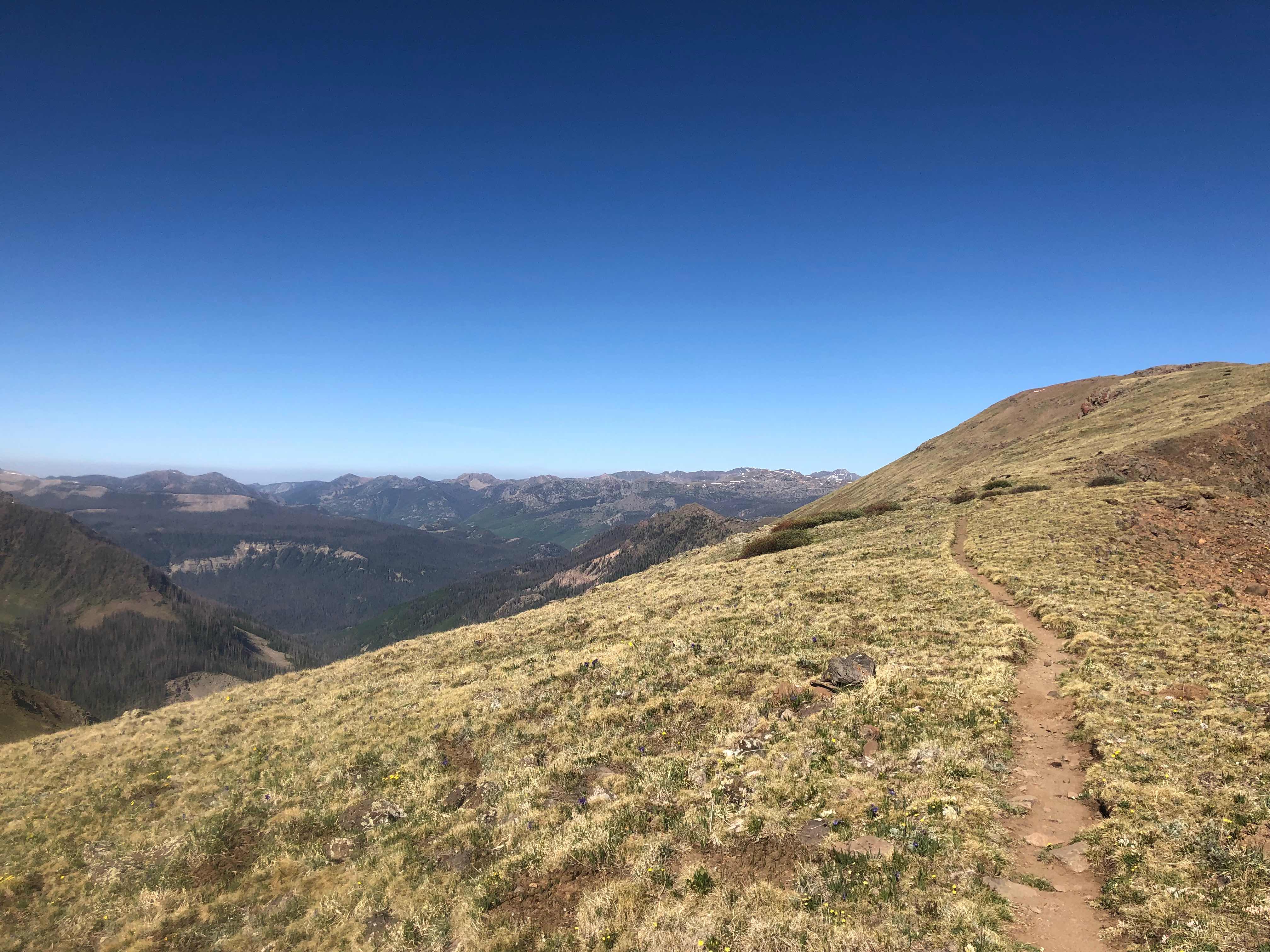 On my way down
After the second climb I had to go downhill through a lot of thickets. After about a mile I got a weird feeling. I was totally enclosed on all sides by thick brush and couldn’t see what was around me. I took off my headphones so I could hear what was going on around me. It seemed like the kind of area I would run into a bear. Shortly after turning off my music I heard something ahead of me. I turned a corner and 25 feet in front of me was a giant moose. I definitely didn’t expect that! I looked at him and he looked at me. We had a nice staring contest. I held my ground, but was thinking, “shit, what do I do now”. There was nowhere for me to go because of the thick brush. Eventually he wandered off, but it was towards where the trail went. I list sight of him in the brush. I couldn’t decide what to do. I ended up staying where I was for a few minutes. Then I would hike for a couple of feet and call out to make noise. It was a nerve racking half a mile before I cleared the thicket. I have seen 2 moose in the wild before. Once in Glacier National Park and once on the AT. On the AT, the moose ran in front of me on the trail. I only saw it for a split second. In Glacier the moose was in a pond and not moving. This was a cool experience! 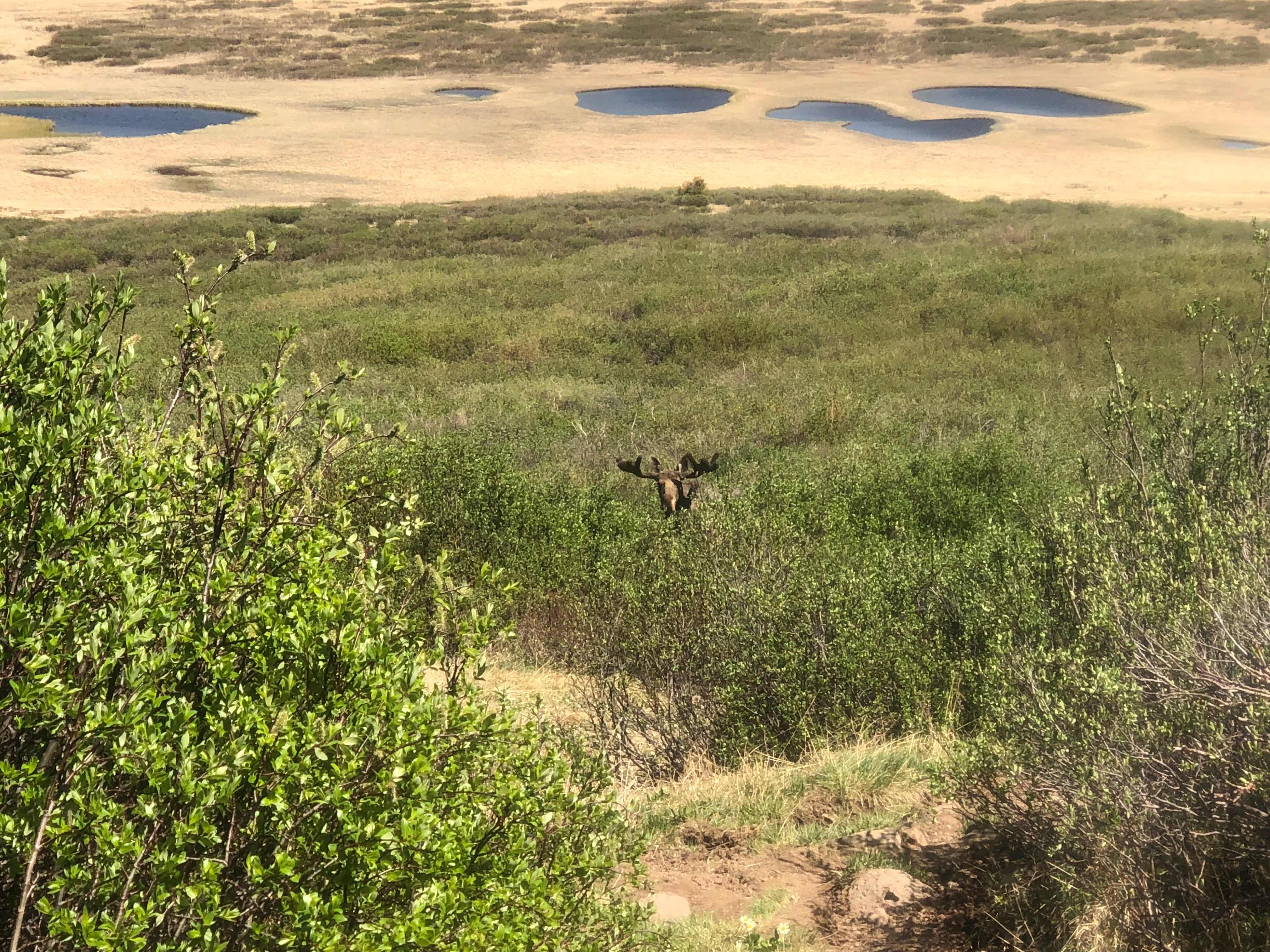 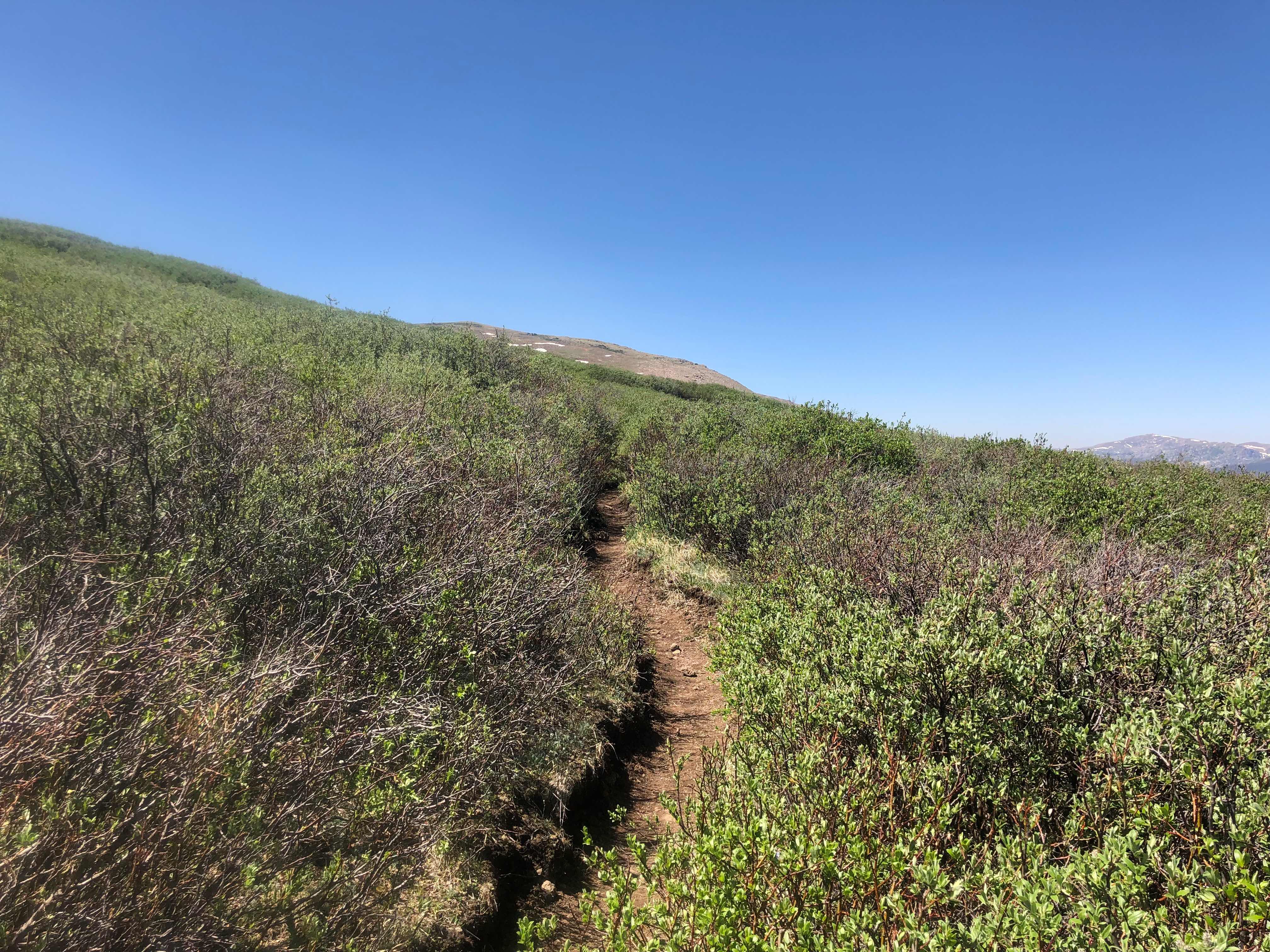 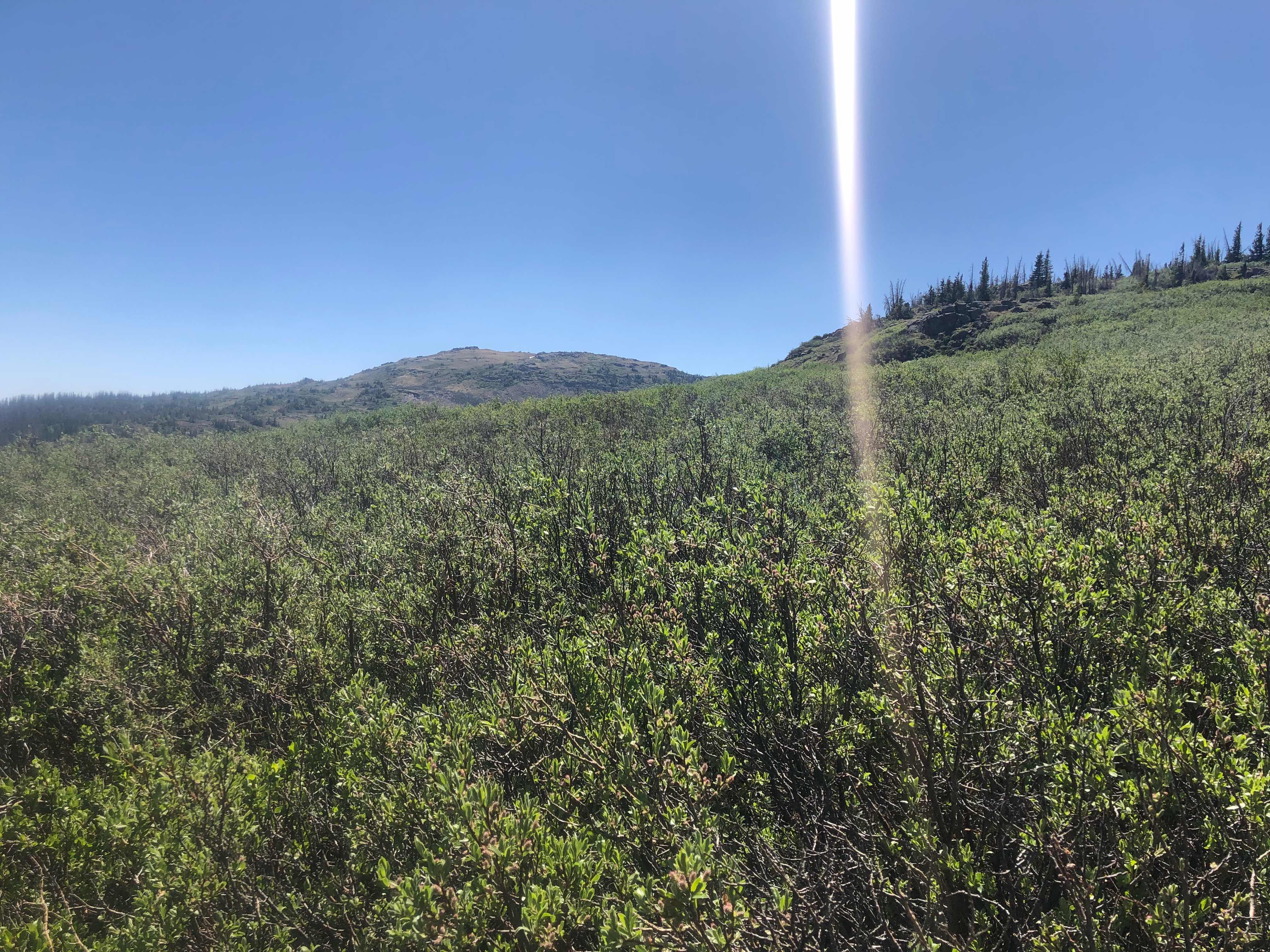 Thickets everywhere
After my moose encounter the trail dropped down to 10,200 feet. It was crazy how much warmer it felt at that elevation. I followed a creek for several easy miles. It was nice to stretch my legs on easy terrain. I knew it wouldn’t last long. I had to climb back up to 12,600. 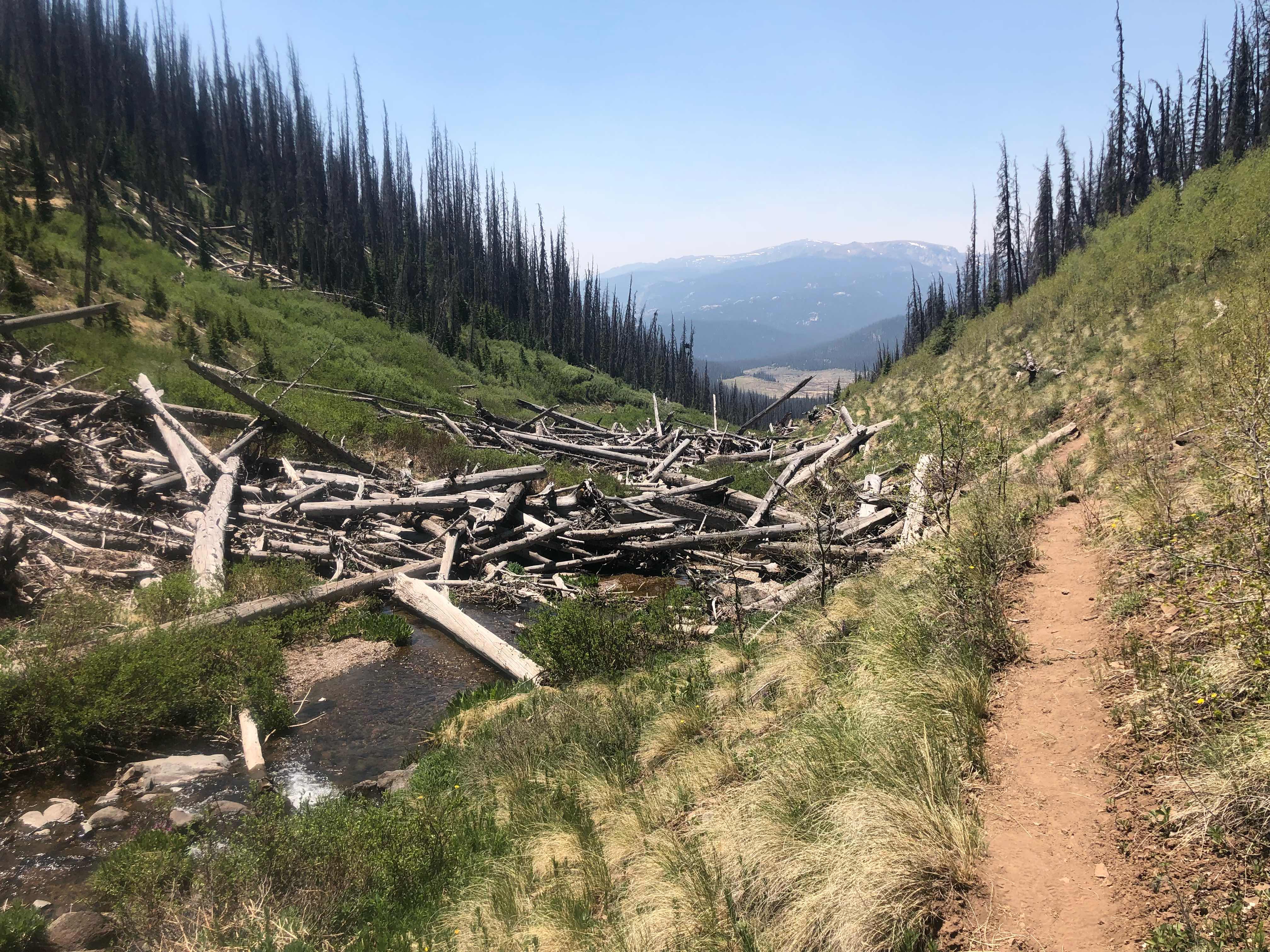 Blowndowns washed into the creek Starting to get smokey again 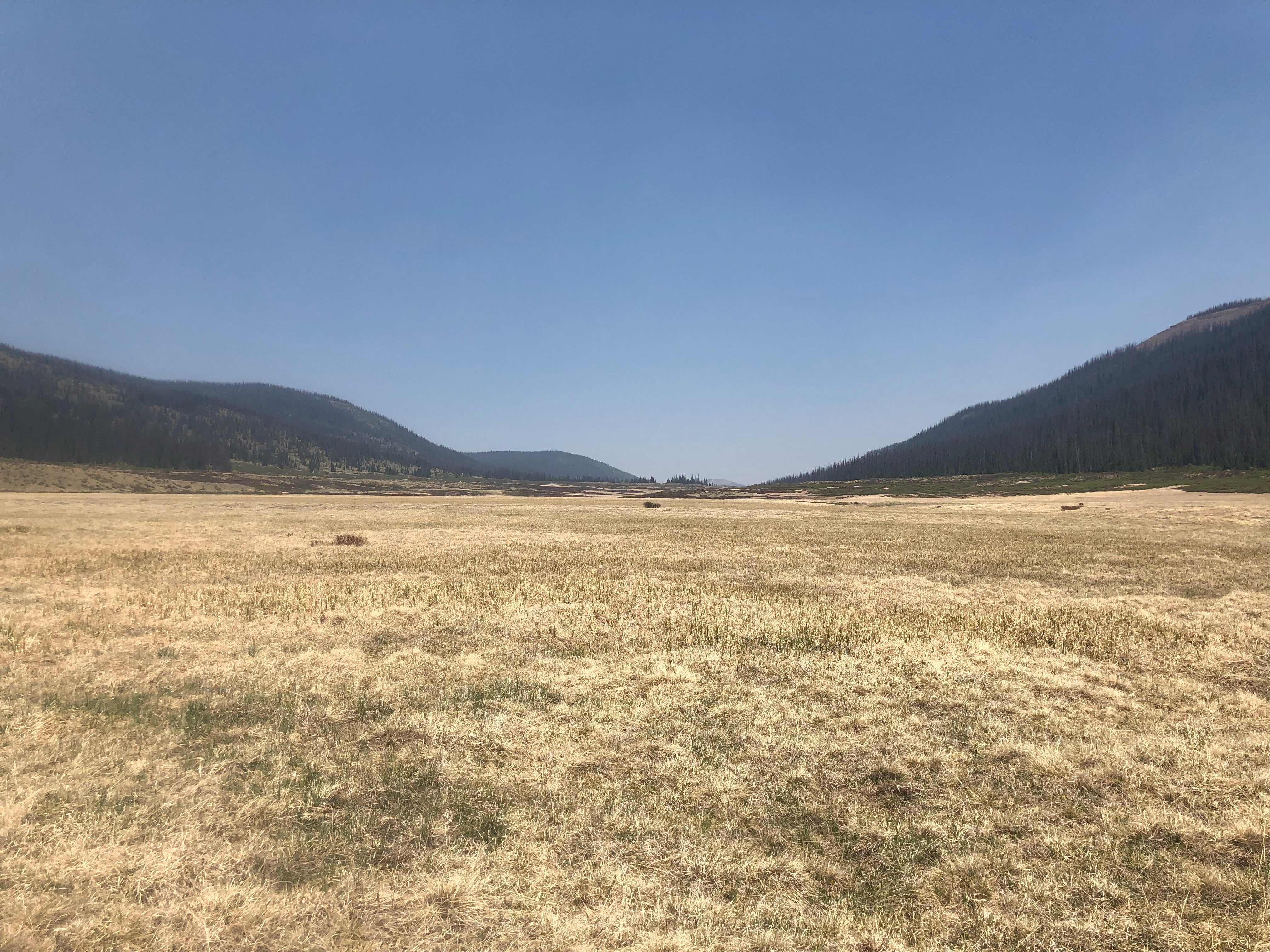 Giant meadow
I’ve been looking forward to seeing a natural feature called The Window for awhile now. When I was reaearching the trail I saw several pictures of it in other peoples blogs and journals. Even with all of the smoke it was very recognizable. I didn’t realize that I would get to hike so close to it. I first spotted it at a distance, but the trail went right next to it as well. 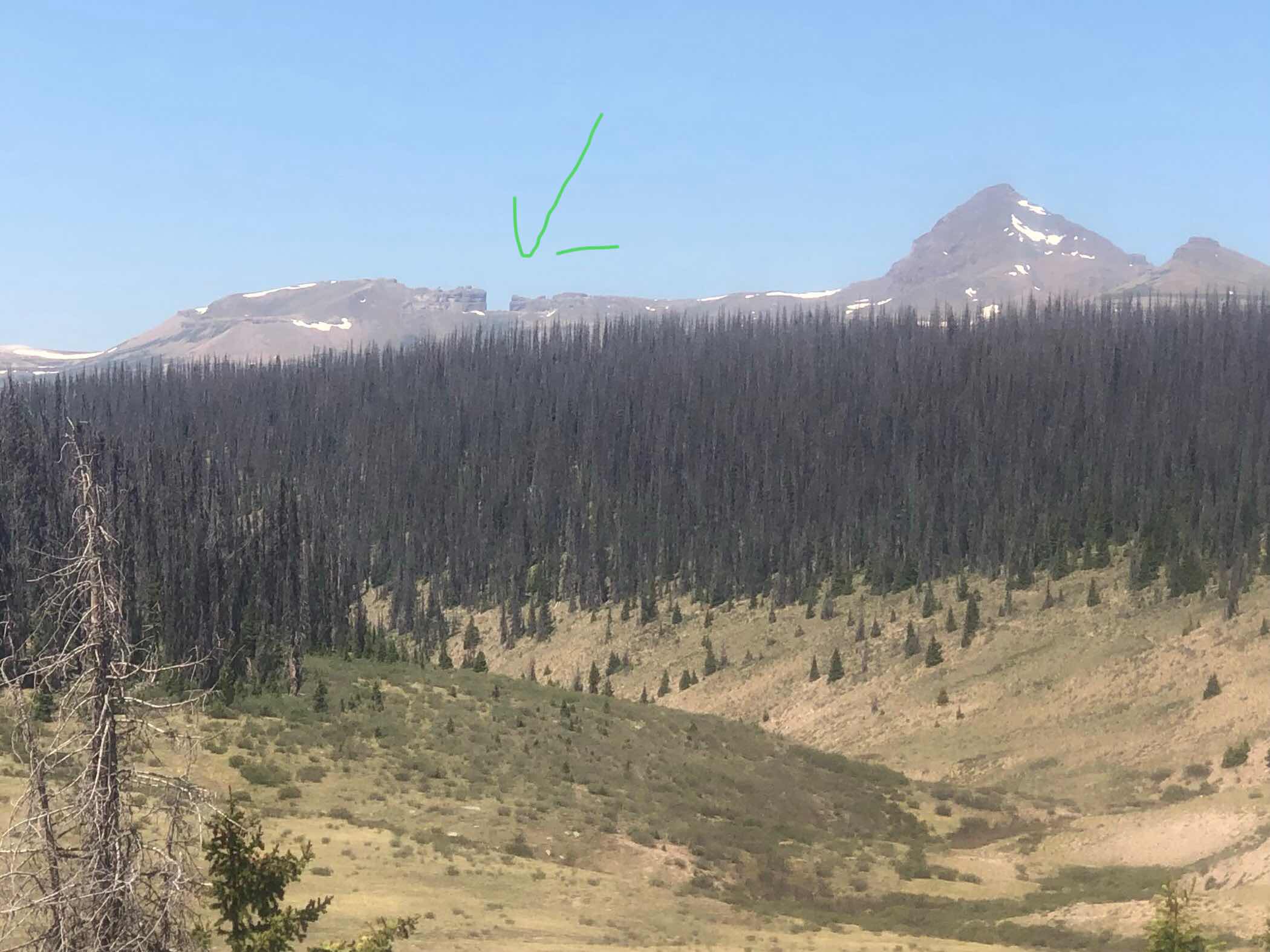 Here is The Window from a distance
I would spend the next five miles hiking up 2,200 feet before getting a closer view. The climb up was definitely an AT like climb. I gained 1,500 feet in just under 2 miles. I usually love climbs like this, but doing it at 12,000 feet is a little more difficult than 3,000 like the Appalachian Trail. I didn’t want to carry a bunch of water up the mountain, so I carried a half liter and stopped several times on the way up to grab a little but at a time. It was more time consuming to do this, but the weight savings made up for the lost time. 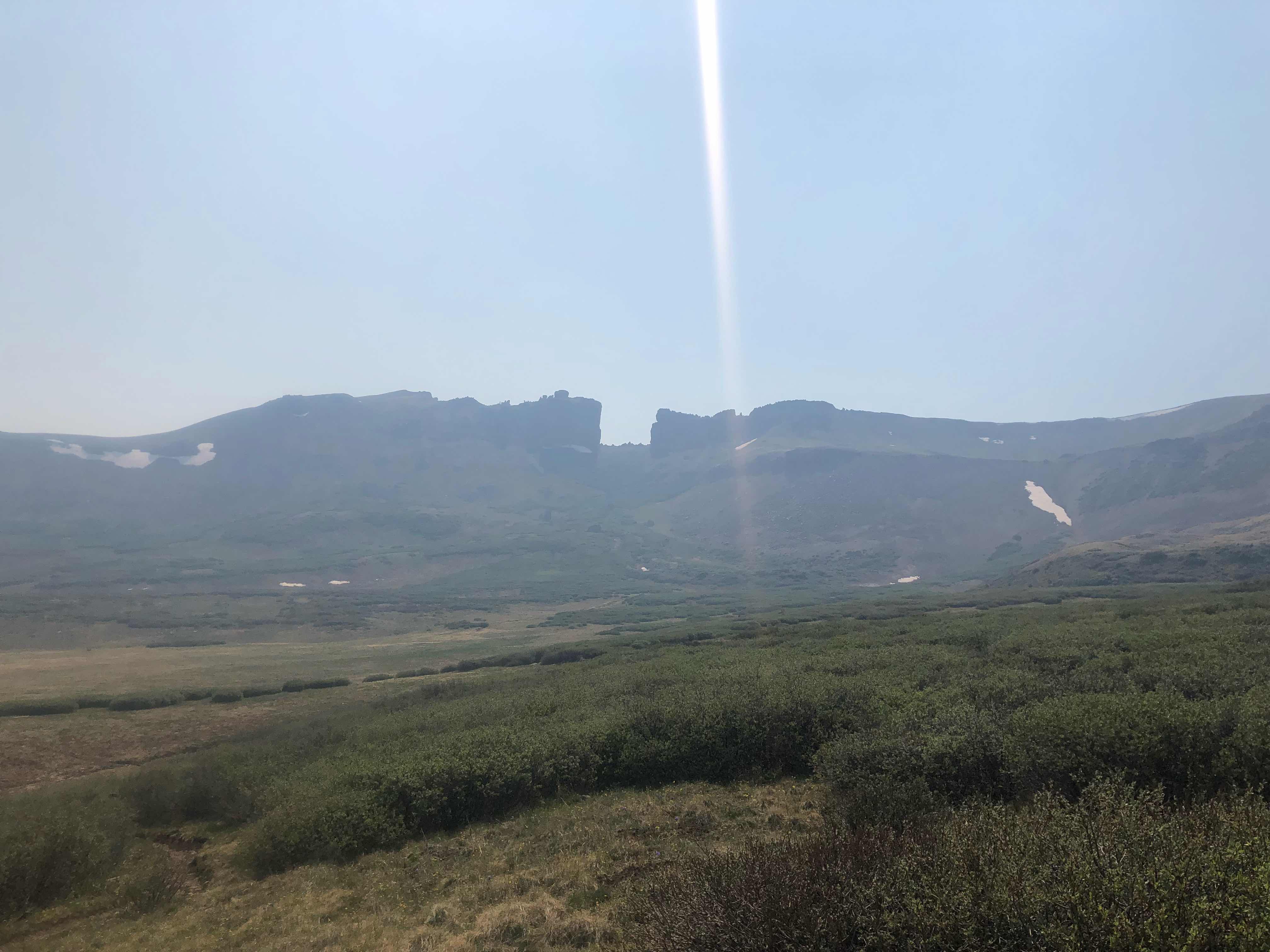 The Window from up close
After hiking in the smoke for most of the day, I developed a hacking cough. My throat didn’t get as irritated as yesterday, but the cough was a little concerning. It ended up going away as soon as I was down climbing up the mountain. It must have been due to the higher exertion. I must have been breathing in more than I thought. In a few more days I should be past the worst of it. 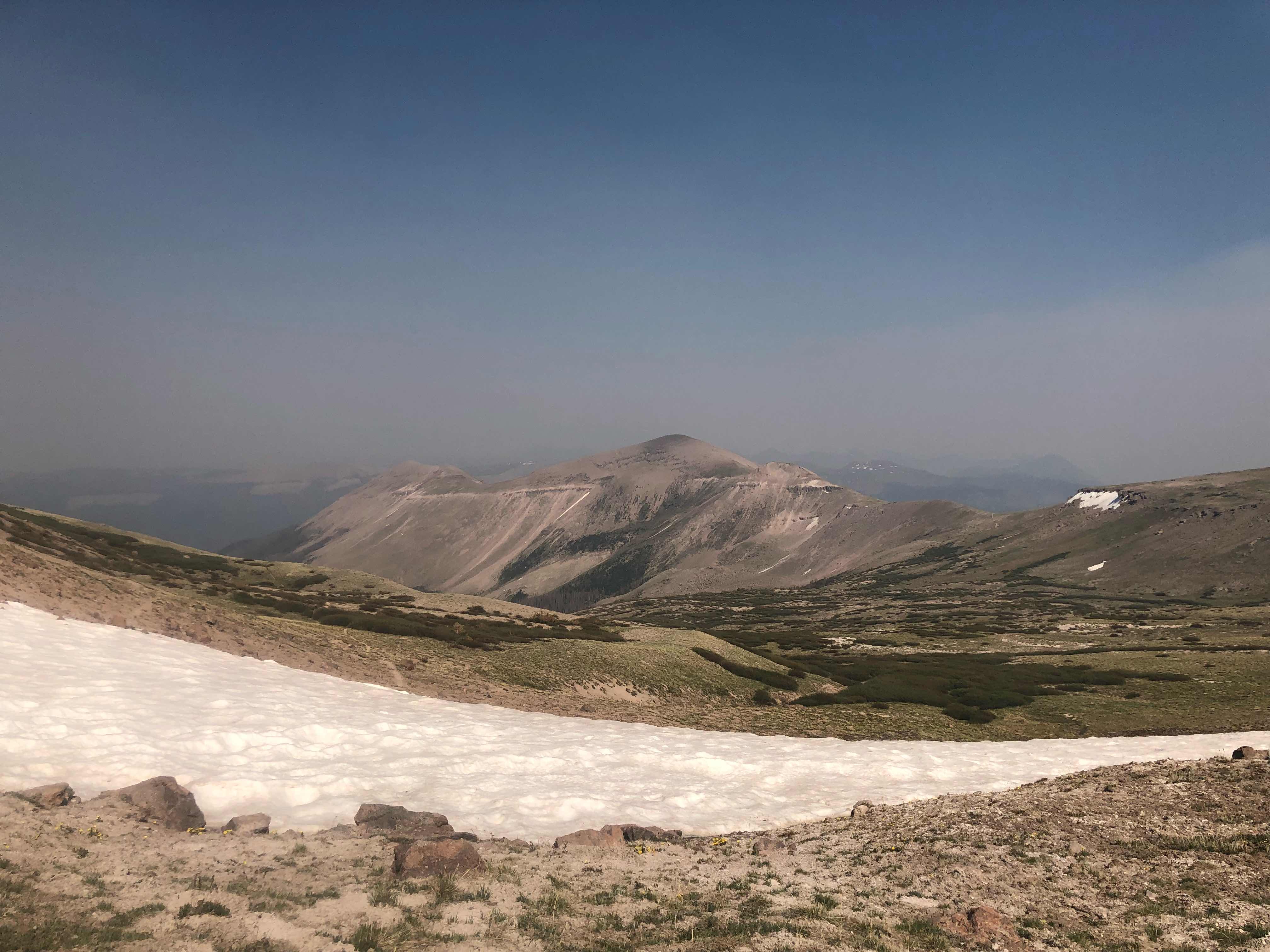 Smoke blocking out the mountains in the background 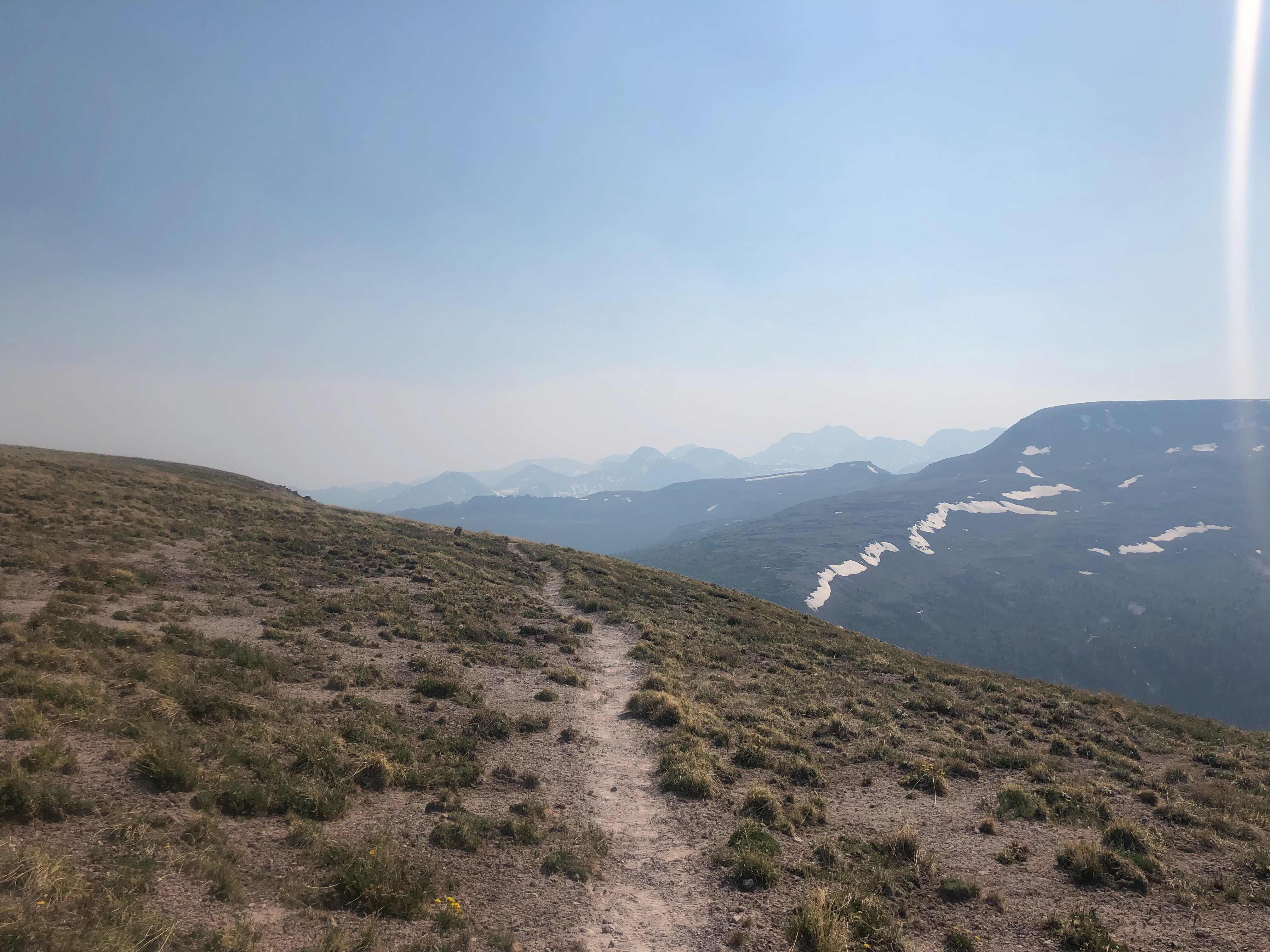 Smoke ruining my views
The last bit of the day went by quickly. I dropped back down 900 feet and then slowly gained that all back. I stopped and set up camp a little early. I didn’t want to camp over 12,000 feet and the trail was climbing above that. I was able to have a leisurely dinner. While I was cooking I noticed that I had just crossed the 1,000 mile mark. Those miles have absolutely flown by. 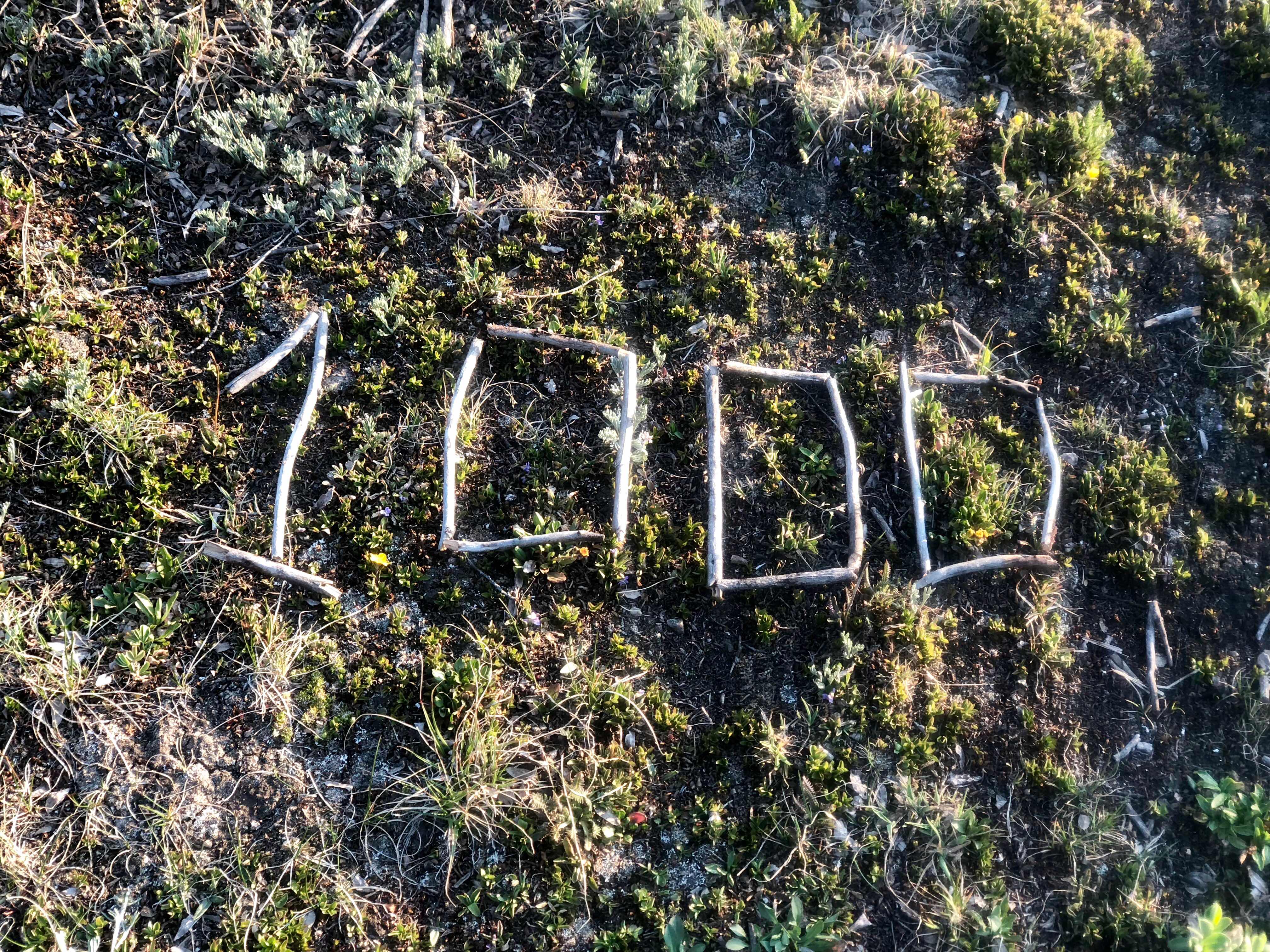 1,000 miles down
It was recently brought to my attention that I never posted my 700 mile marker. Oops! 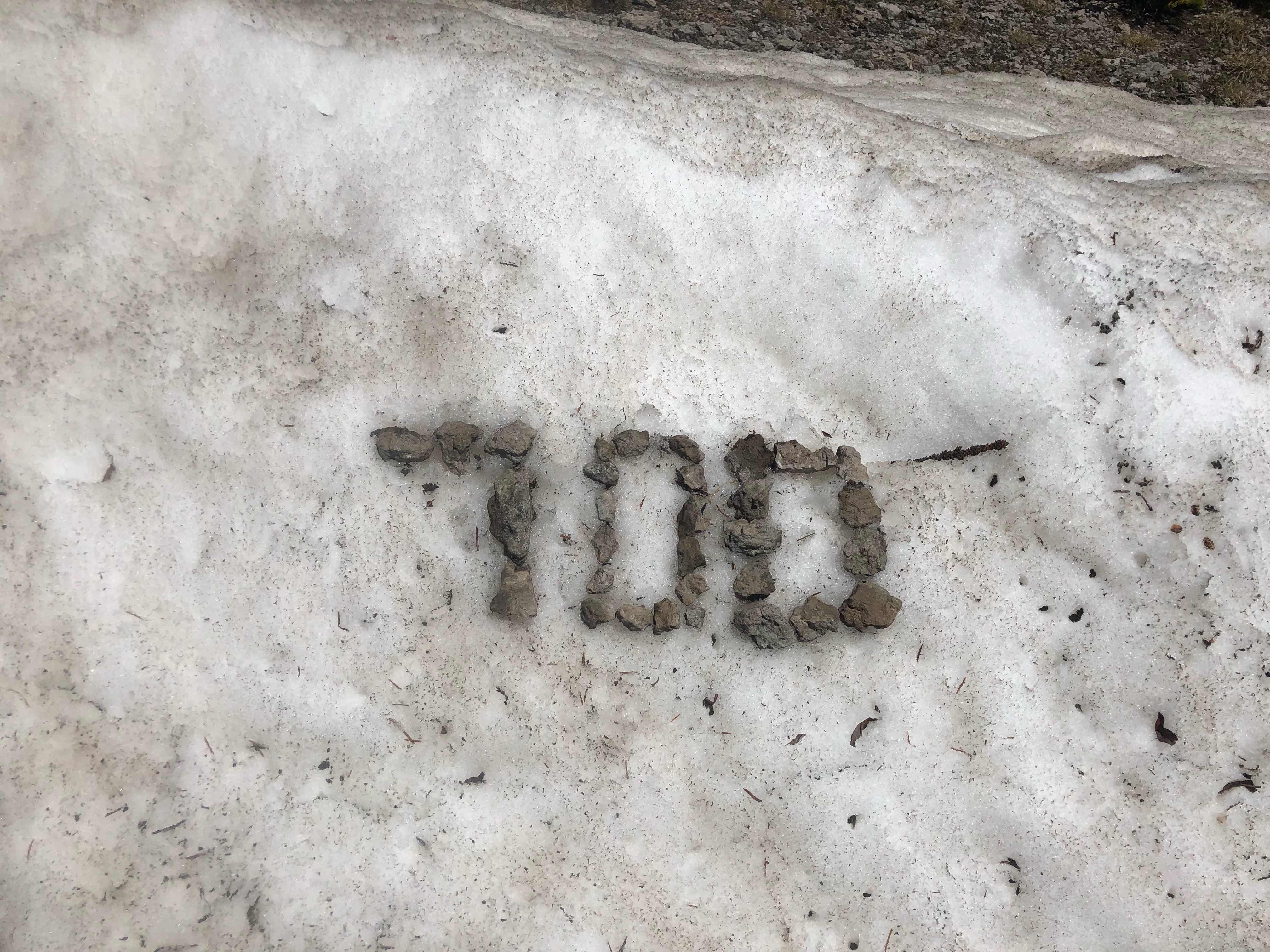 This was when the weather was bad and I was over how Colorado was starting off
I decided to cowboy camp again tonight. I hope I stay warmer than I did last night. I really wanted to set up my tent, but I couldn’t find a spot big enough with flat ground. Cowboy camping takes up a little less space. Hopefully I won’t regret this decision.
“Colorado has always been a good place to find what you're made of.”
- John Hickenlooper