I never imagined that it would be possible to hike 33 miles in Colorado. Last night I was joking around with Turtle. I told him since it was going to rain all day I was planning on hiking 35 miles. Little did I know that that was a possibility. I wanted to be packed up and hiking before it started to rain, so I got up at 5am and was hiking by 5:30. We were camped with four other people, which made it difficult to dig my morning hole. I saw a trailhead with a privy located 4.4 miles away. I decided I could hold it until then. Surprisingly everyone was up and moving around when I left this morning. That almost never happens. I pride myself on being the early riser on trail. Lord knows I’m not in everyday life. I had only gone a mile or two when I spotted another moose. The lady who gave us a ride to the trailhead yesterday told me that moose are not native to Colorado. They were successfully introduced about 25 years ago. Well, they seem to be thriving. 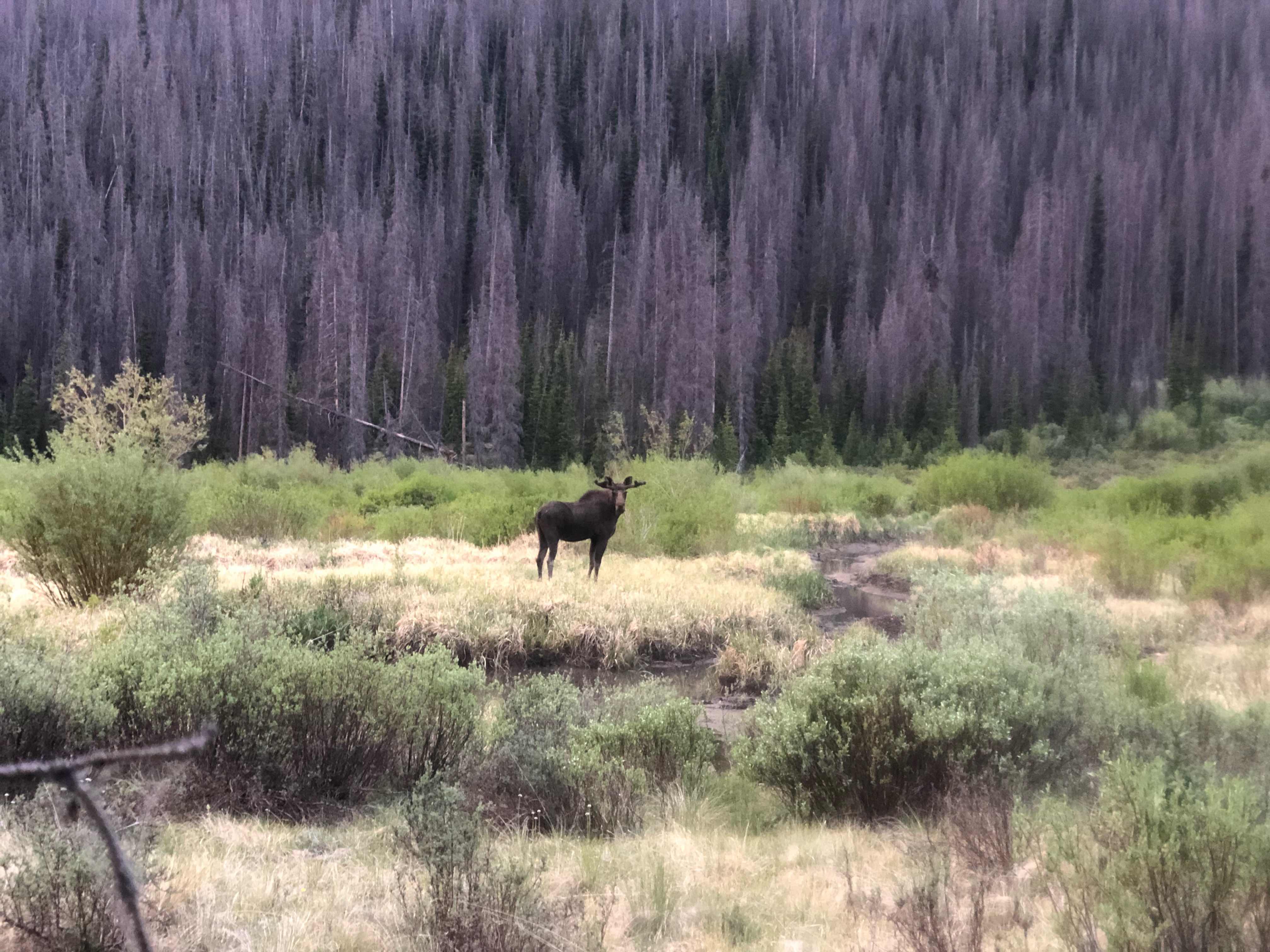 Good morning Mr. Moose
I hiked 4.4 miles in record time this morning. I really had to go to the bathroom and was intent on making it to the privy. My legs felt very tired this morning and I struggled for the first eight miles. Then I realized that I didn’t have my usual coffee drink and the lack of caffeine had me dragging. I’m carrying a water additive called Mio that has caffeine, once I drank that I was feeling much better. The morning was very windy and overcast, but the promised rain held off until after 9 o’clock. I saw a lot more hikers on trail today than ever before. It is crazy to have hiked so long without being in a hiker bubble. 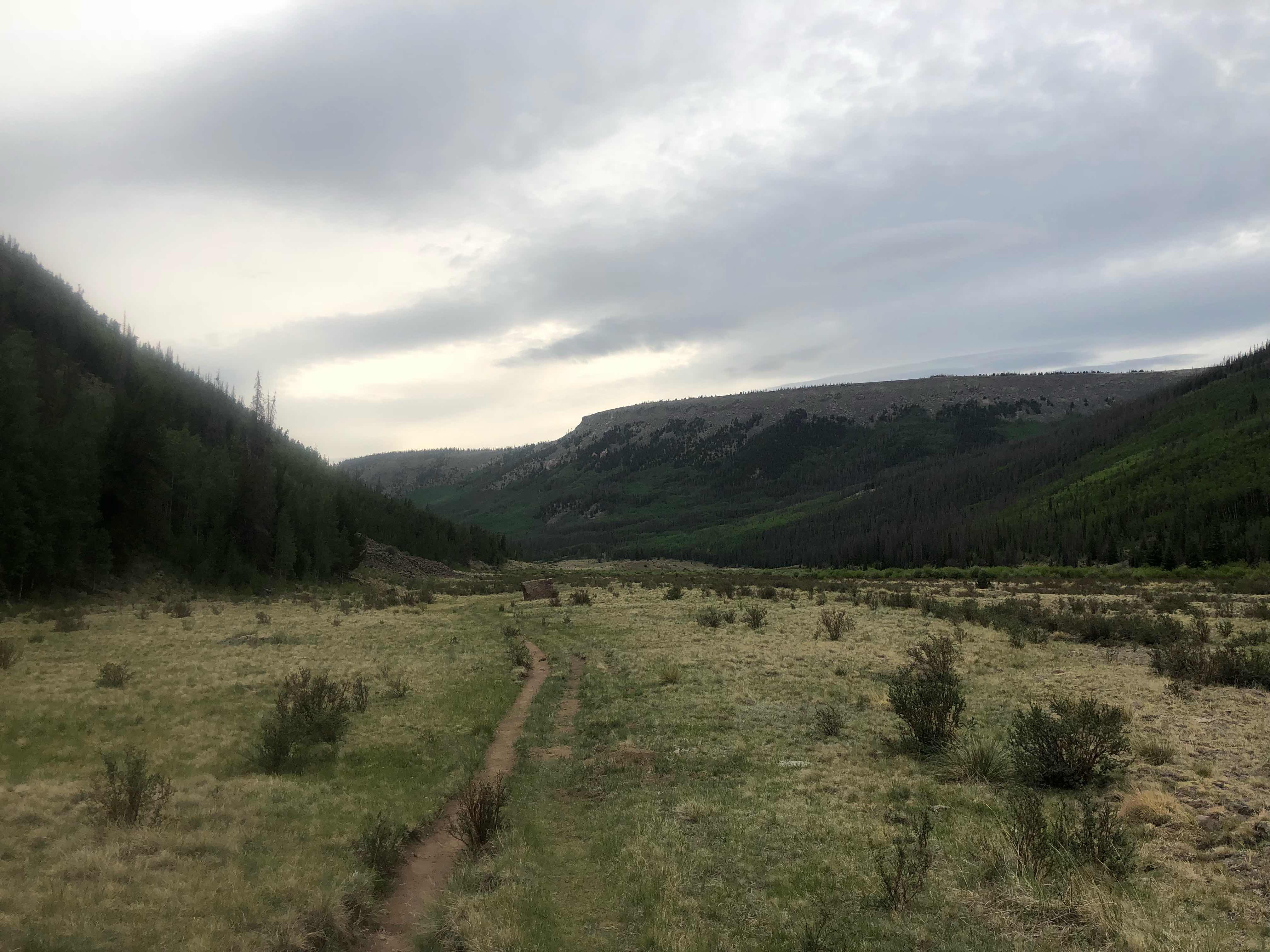 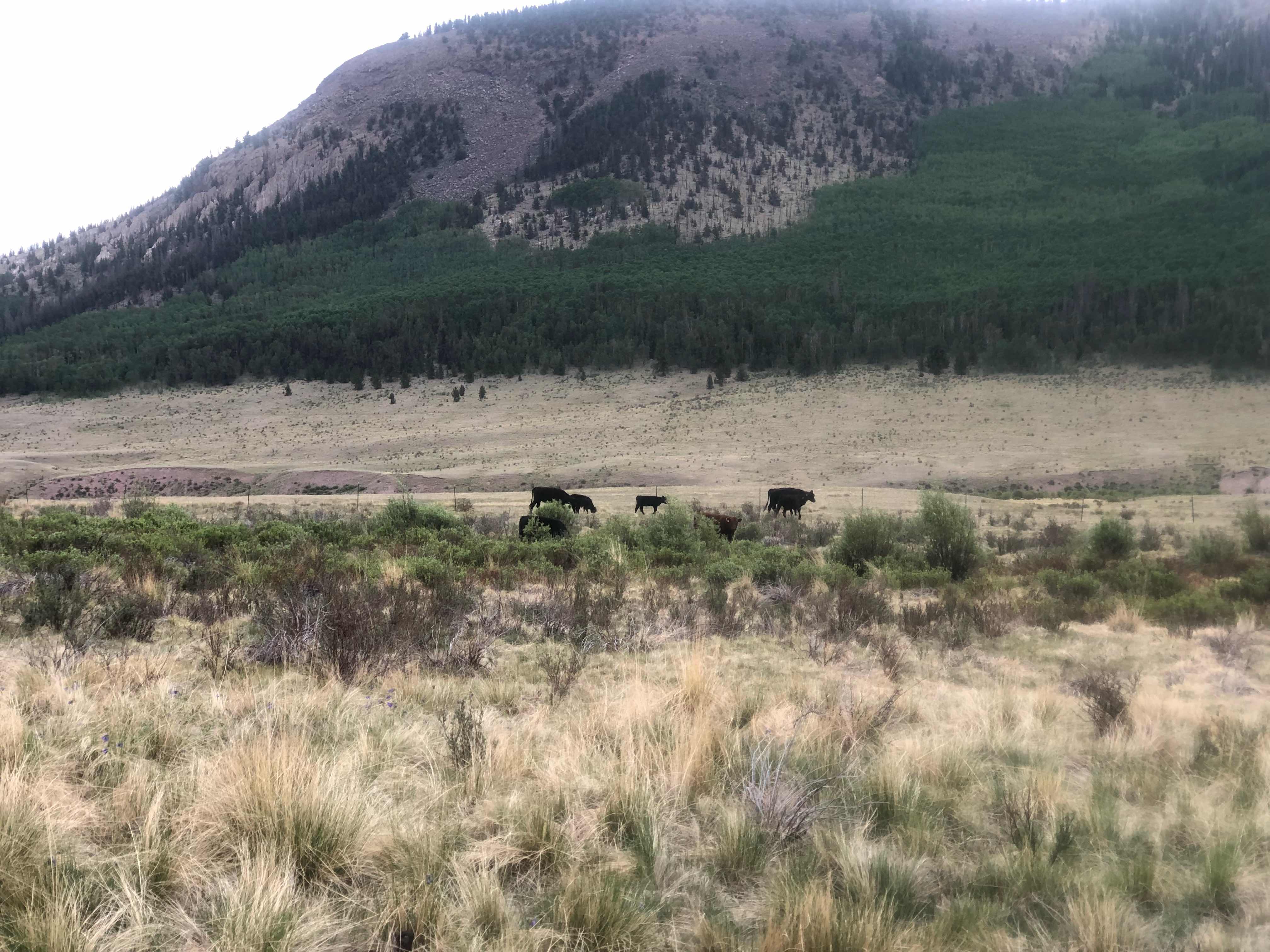 First cows I’ve seen on trail since Wyoming
Around mile eight I ran into six other hikers. First I stopped to chat with Not Yet, Who was just starting to pack up camp. Then I crossed a swift flowing stream with Bubbles, Sprout, Saint, and 2 others whose names I didn’t catch. I decided to take a quick break and was surprised when Turtle caught up to me. He wasn’t even close to leaving camp this morning when I left. He has been trying really hard to keep up with me the last few days. Yesterday he jokingly said(at least I think he was joking) that his pride was wounded by being outhiked by an old lady smoker. Ouch! I’m only 5 years older than him. Shortly after my break it started to rain. I had kept my rain gear easily accessible knowing that the weather was going to be bad. It drizzled for about five minutes before I finally stopped to put my rain jacket on. Within minutes it stopped. I kept my jacket on for another 15 minutes because I thought it would start right back up. As soon as I stopped to take it off it started to rain in earnest. I decided it was time to stow away my phone and put my rain pants on. For the next two hours it rained. I was lucky that it was never truly a downpour, but it was definitely raining harder than a drizzle.
The terrain today was super easy. It felt like being back in New Mexico. Most of the day was spent hiking on dirt and Jeep roads. With the rain and easy terrain the miles flew by. I had hiked 20 miles by one o’clock. After the initial two hours of rainfall things weren’t too bad. I managed to stay warm enough in my rain gear with just shorts and a T-shirt underneath. It rained off and on for the entire day. Every time I though it was done for the day it would start again. I lost count of how many times my rain jacket came off and on. With my phone safely stowed away I didn’t take very many pictures. Plus, there weren’t very many views or photo worthy things to see. 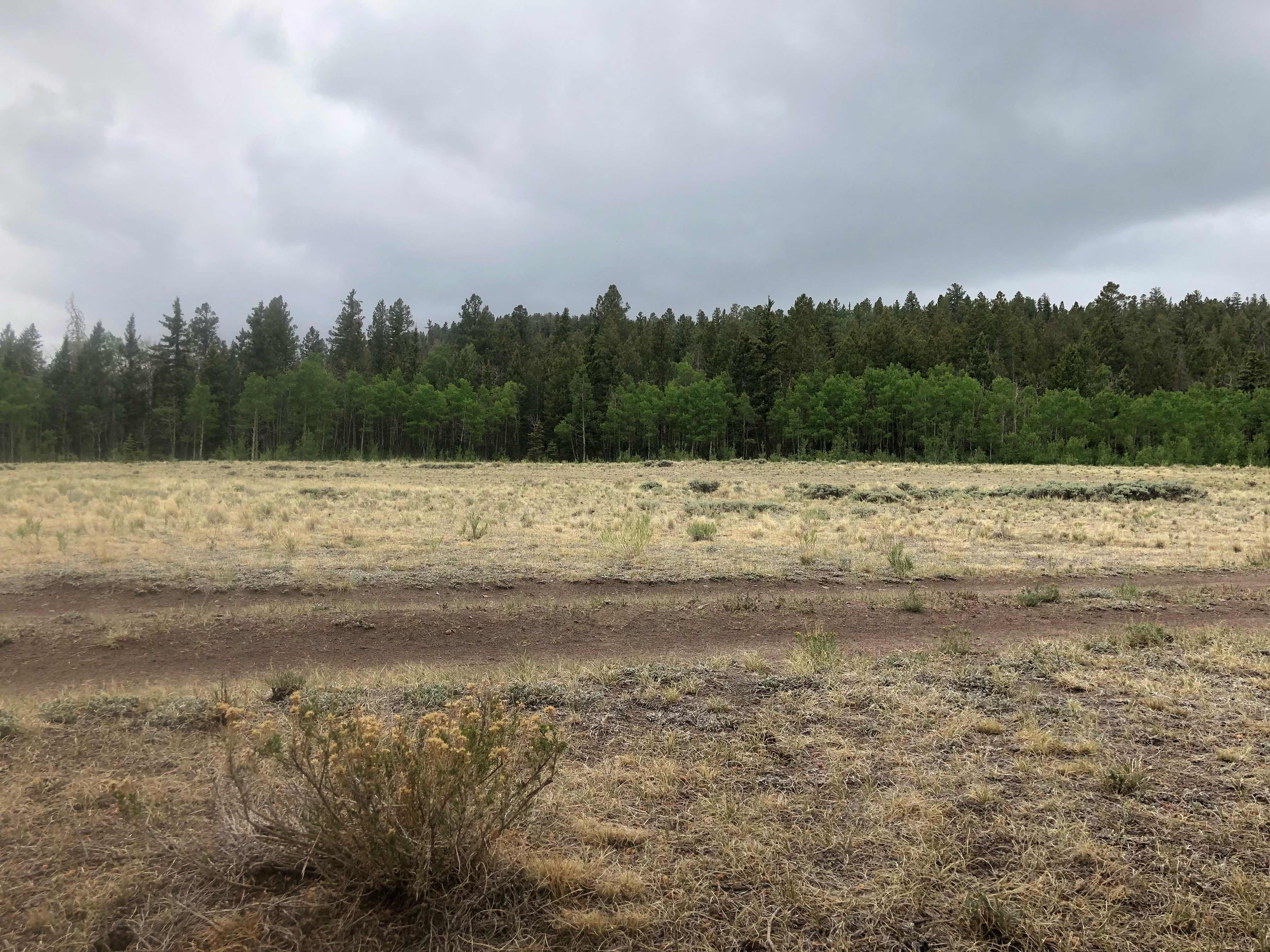 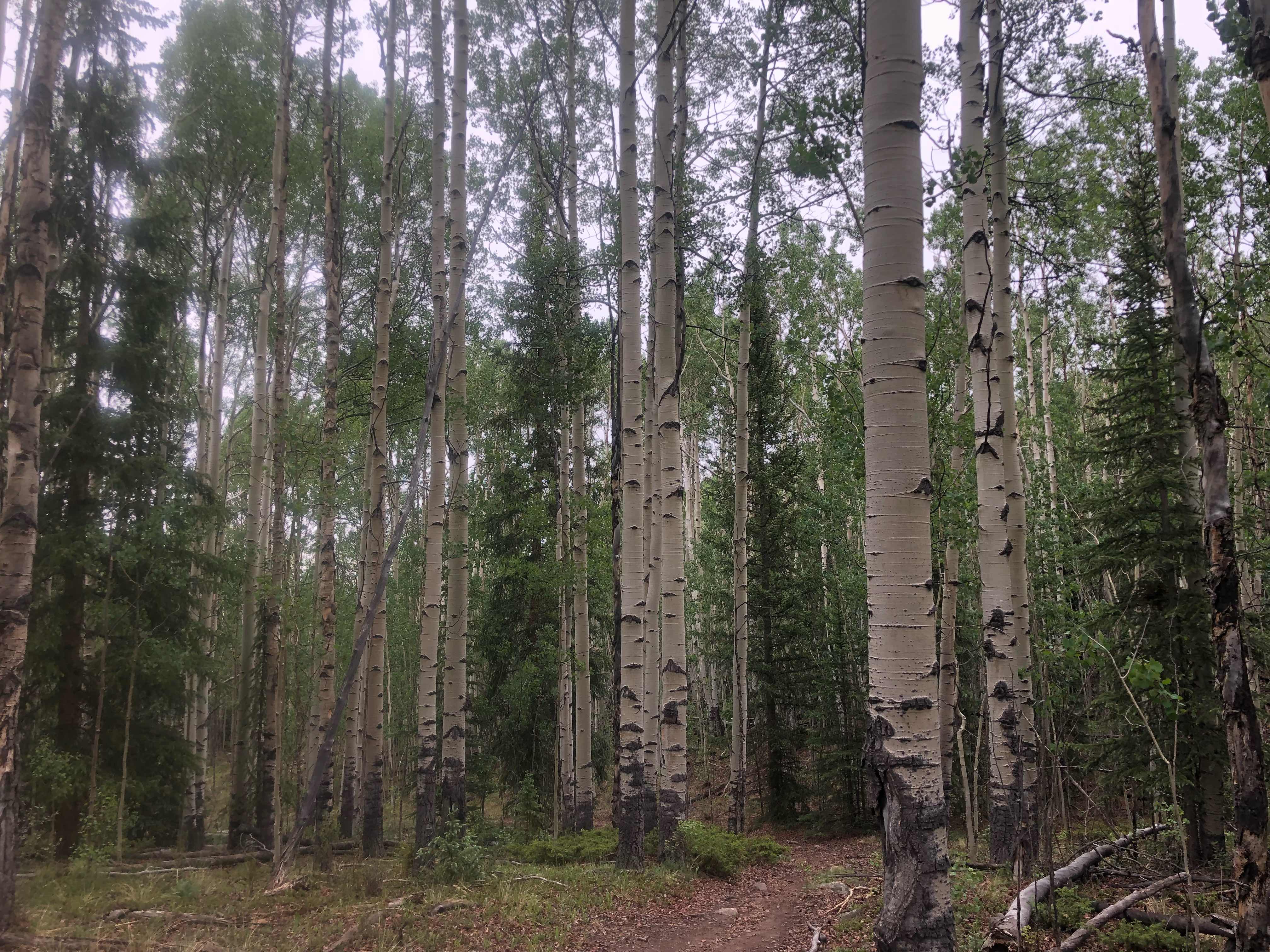 Pretty aspen forest
I kept myself entertained today by listening to a six hour podcast on the life of Teddy Roosevelt. It was enthralling. The podcast was called History on Fire and it really helped the miles fly by. I feel like I learned a lot today and I’m looking forward to listening to other podcasts in the series. I also listened to a few short TED podcasts that were equally entertaining. I just wish that they had lasted a little longer. They were only about ten minutes a piece. 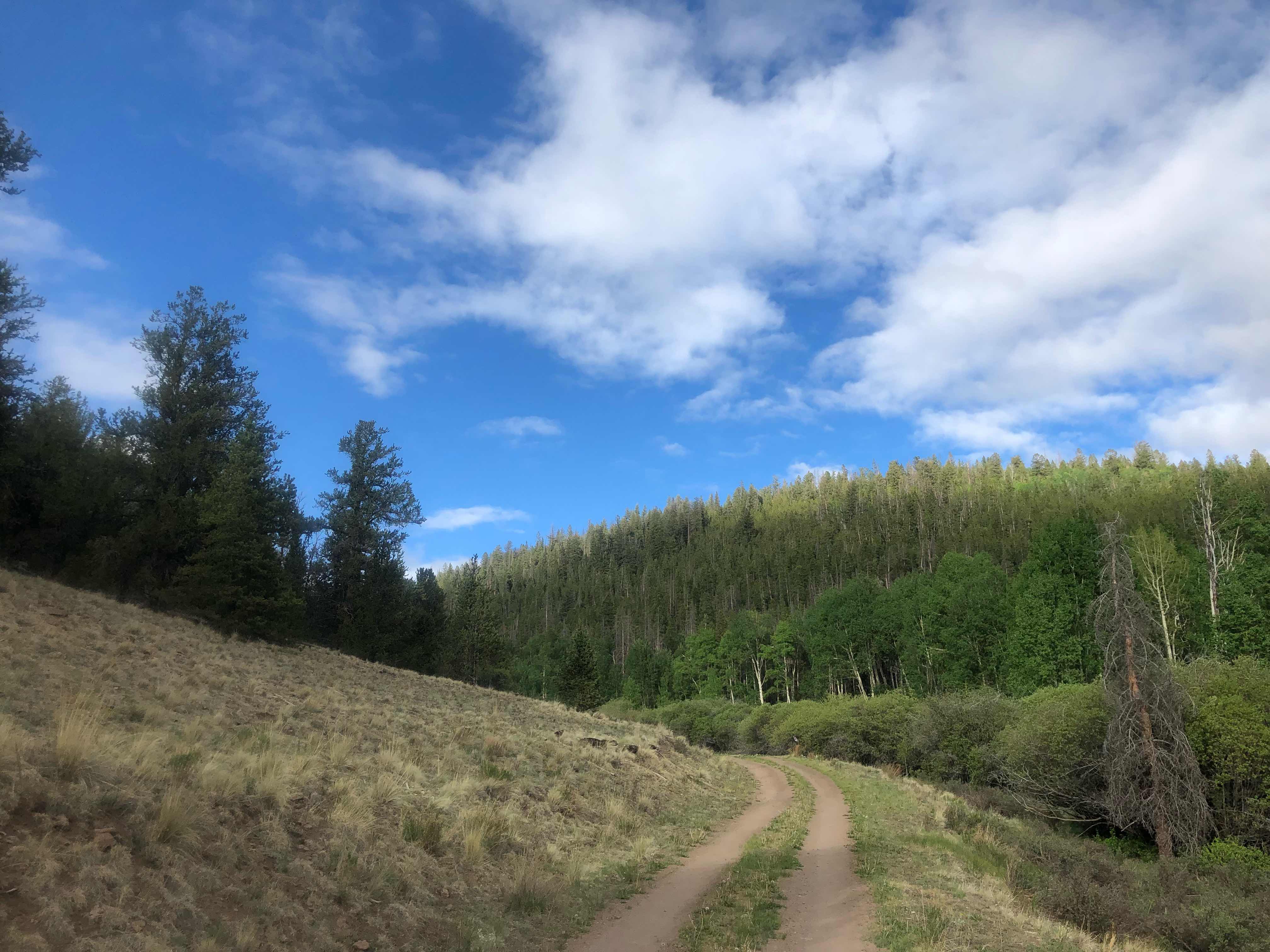 Clear blue sky that lasted for 5 minutes before it started to rain again.
I could have easily kept hiking longer today. My legs still felt pretty fresh. I decided to stop early because of the upcoming terrain. I was about to climb above 11,000 feet and there didn’t it didn’t look like I would find a place to setup camp. Plus, I saw a marshy area on the map and that did not appeal to me. I hiked 33 miles and still got into camp around 6:30. I gave myself a pat on the back and ate a giant dinner. Today was the first time since being back in Colorado that I’ve had an appetite on trail. I think staying at a lower elevation today made a big difference. I’m hoping that the weather improves tomorrow. We will be back up to 12,000 feet for a portion of the day. I’m also hoping that after a tough day yesterday and the big miles today that my legs will feel ok. 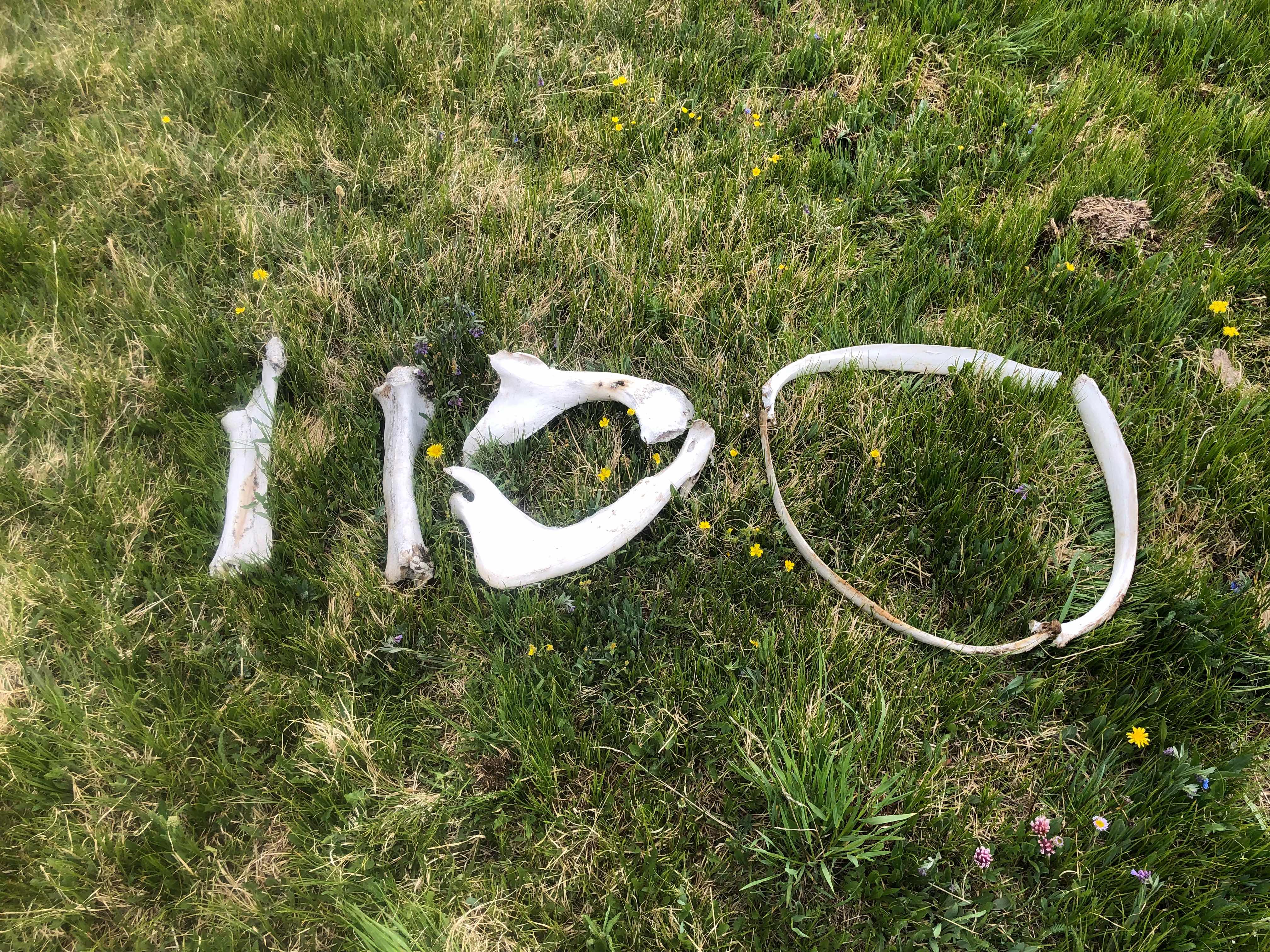 "Develop resilience and be brave. There are days when it is very discouraging. You have to develop personal resilience to environmental things that come along. If you let every single environmental challenge knock you off your game, it's going to be very, very hard."
- Renee James