Considering the rough conditions yesterday I slept incredibly warm. I’m really glad I decided to switch to warmer base layers for Colorado. I awoke to clear skies, which was a huge relief. I’m not sure I could have mentally handled another crappy day. It took me slightly longer to pack up since a lot of my gear was still soaking wet. Extra care had to be taken to insure that my clothes and sleeping bag remained dry. I started the day off with another big climb, which was a good thing. It was pretty chilly out still and I had to leave my base layer and puffy jacket in my pack so that they would stay dry. I reached the top of the climb after about 2 miles and had strong enough cell service to post my blog. By the time they had uploaded I was pretty chilled again. 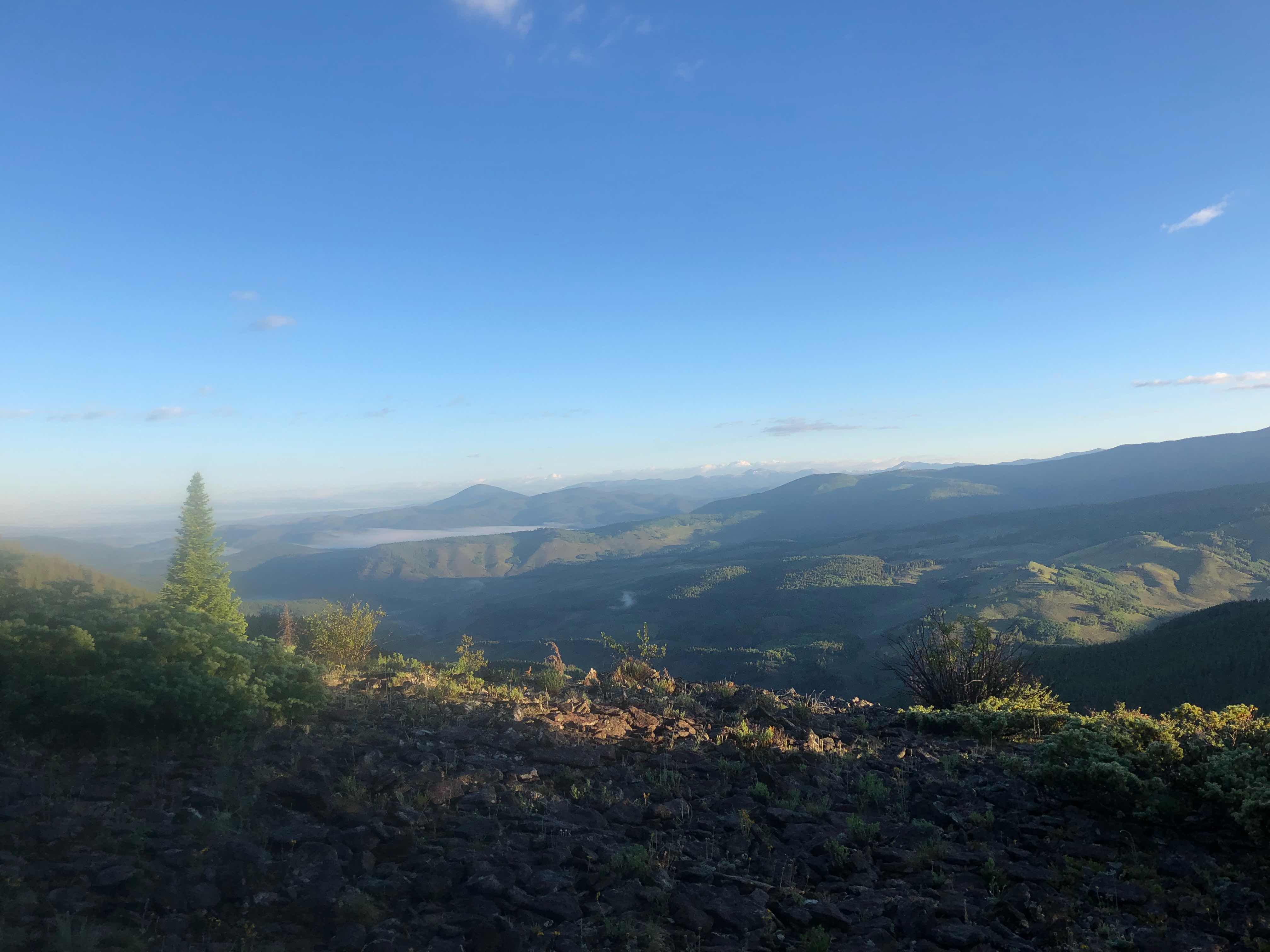 Clear skies
I carefully worked my way back downhill. The trail was really sloppy and I had to hike through mud and slippery wet rocks. That is always a dangerous combination. After dropping close to one thousand feet of elevation, I had to gain it all back again. The last few mornings I have really missed my breakfast drink. Usually I feel great in the morning and the miles come easily, but without my coffee I have been dragging. I’m also missing the calories. My shake is close to 600 liquid calories. I never feel like eating first thing in the morning and I really haven’t felt like eating my poptarts that I packed for this leg. After the Appalachian Trail I dislike even the thought of poptarts. As a result I haven’t been getting any calories in until 2-3 miles into my day. I can’t wait for my resupply box tomorrow which will include my breakfast shake. 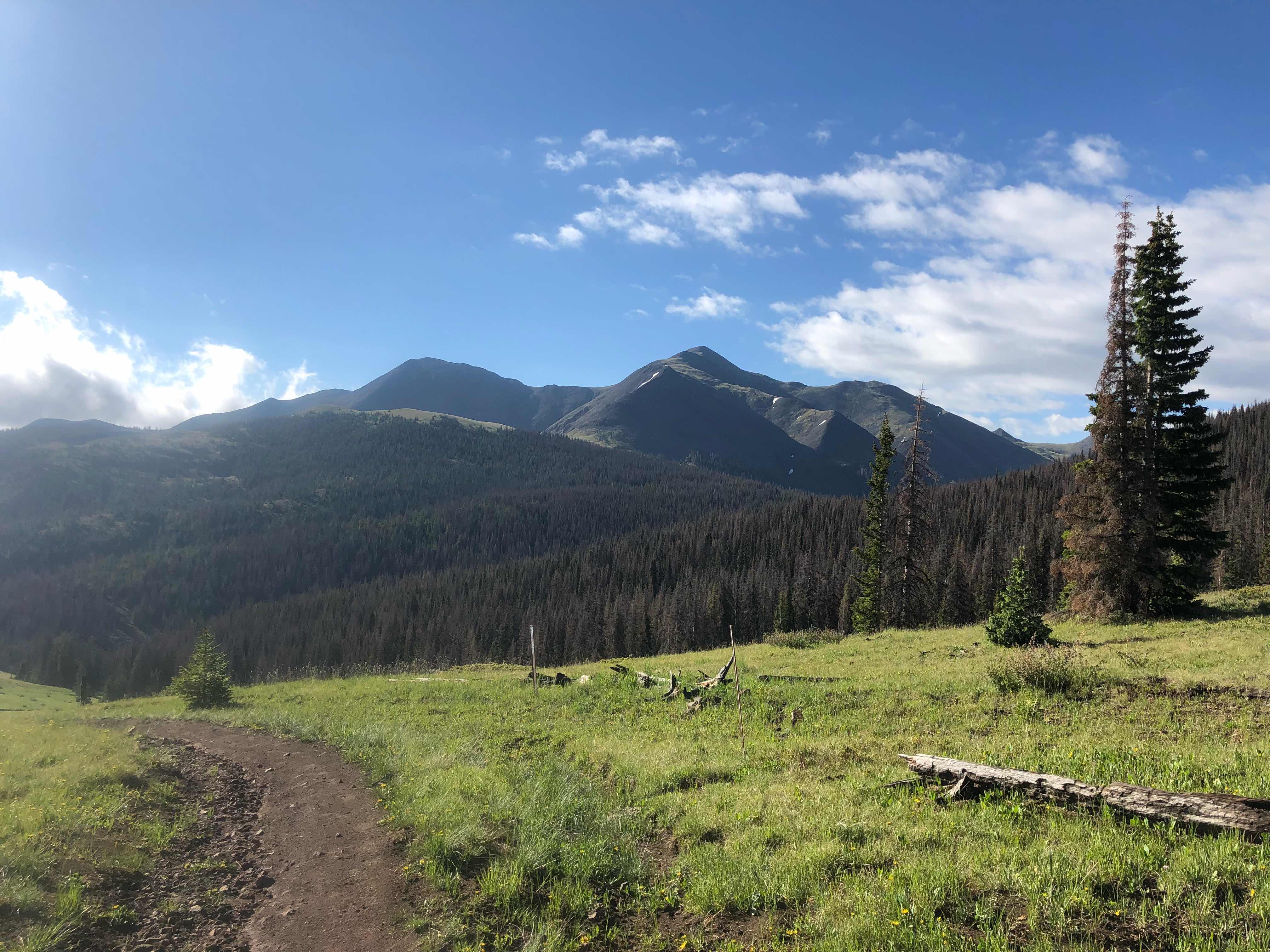 Windy Peak
I really enjoyed the scenery today. I spent most of the day hiking in the forest. After a few days of rain everything was so green and lush. The climbs were very well graded and I knocked them out fairly easily. After about eight miles I came to Marshal Pass trailhead, which had a privy. It is amazing how such a small thing can be so exciting to me. For the second time during this stretch I didn’t have to dig a hole. I took an extended break and set out my rain gear, tyvek ground sheet, and stuff sacks so that they could dry out in the sun. I had another 1,300 foot climb ahead of me, but since it was over 3 miles I knew it would be easy. What I couldn’t know at the time was that for the rest of the hike I would be sharing the trail with mountain bikers. This section had an added element of difficulty due to sharing the trail with them. At first I thought it was pretty neat. They were coming downhill over very technical terrain, while I was going uphill. For the beginning of the climb the trail was nice and wide and I saw only a few. I had more than enough room to get out of their way. Once I began to climb higher the trail turned into single track and I began to see a lot more bikers. I was confused as to why so many people would be out on a Monday morning. As I began to round blind curves I was concerned about being run over. I turned off my podcast in hopes that I would hear them sooner. Luckily, my timing was good and I never came across any bikers on the blind curves. After having about 30 bikers come past me I figured out that there was no way this route was just being used by locals. I came to an area where the bikers were going uphill and walking their bikes. I stopped and talked to a couple that told me there was a shuttle dropping them off at Monarch Pass. The mystery was solved, this was like a tour group for people on vacation. I ended up seeing close to 75 people. It was a cool experience and all of the cyclists were very nice. They would call out the numbers in their group so I would know how many more would be coming by in the near future. It definitely kept me on my toes for the 11 miles we shared the trail. 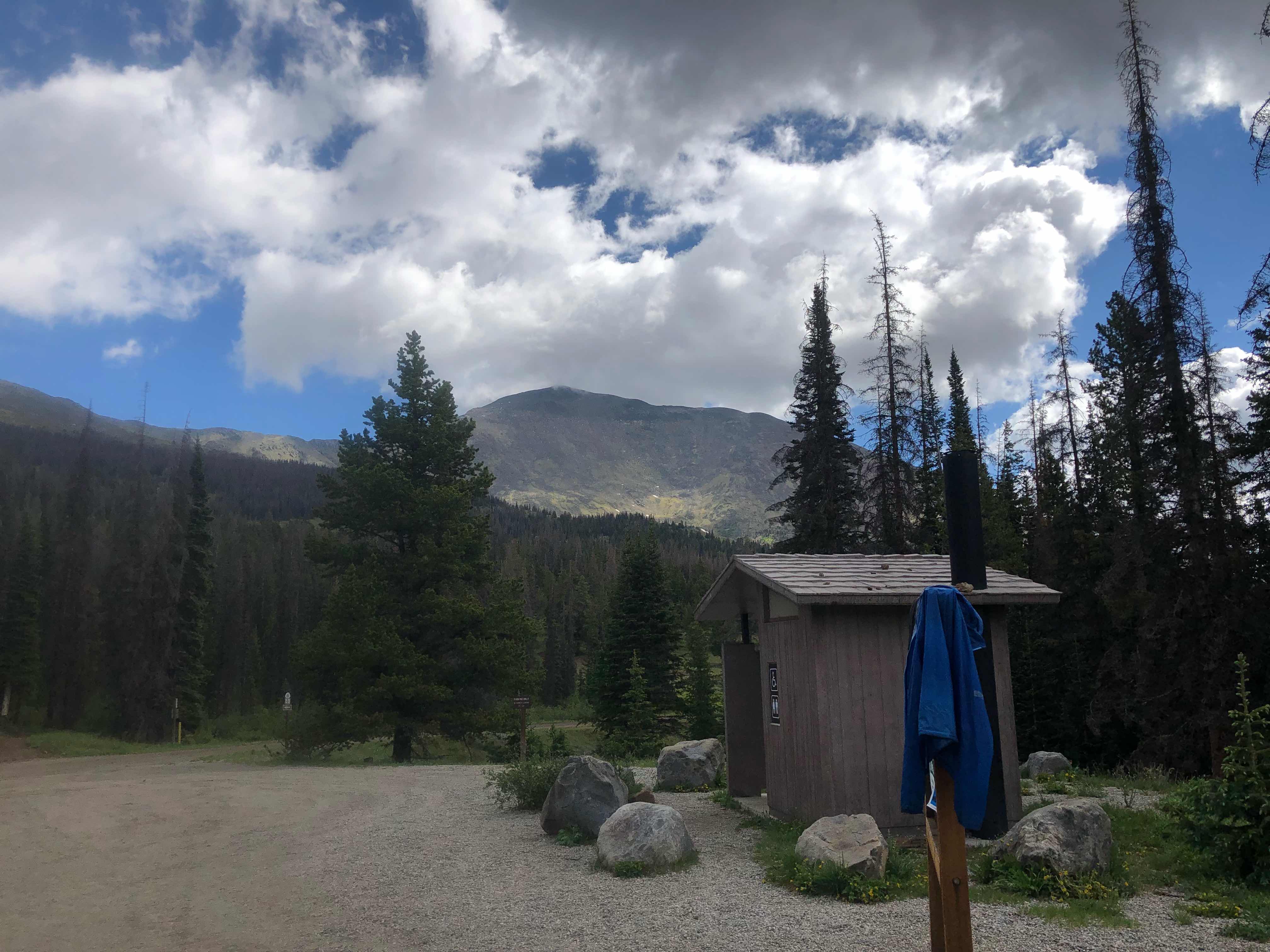 Drying my clothes next to the privy at Marshal Pass 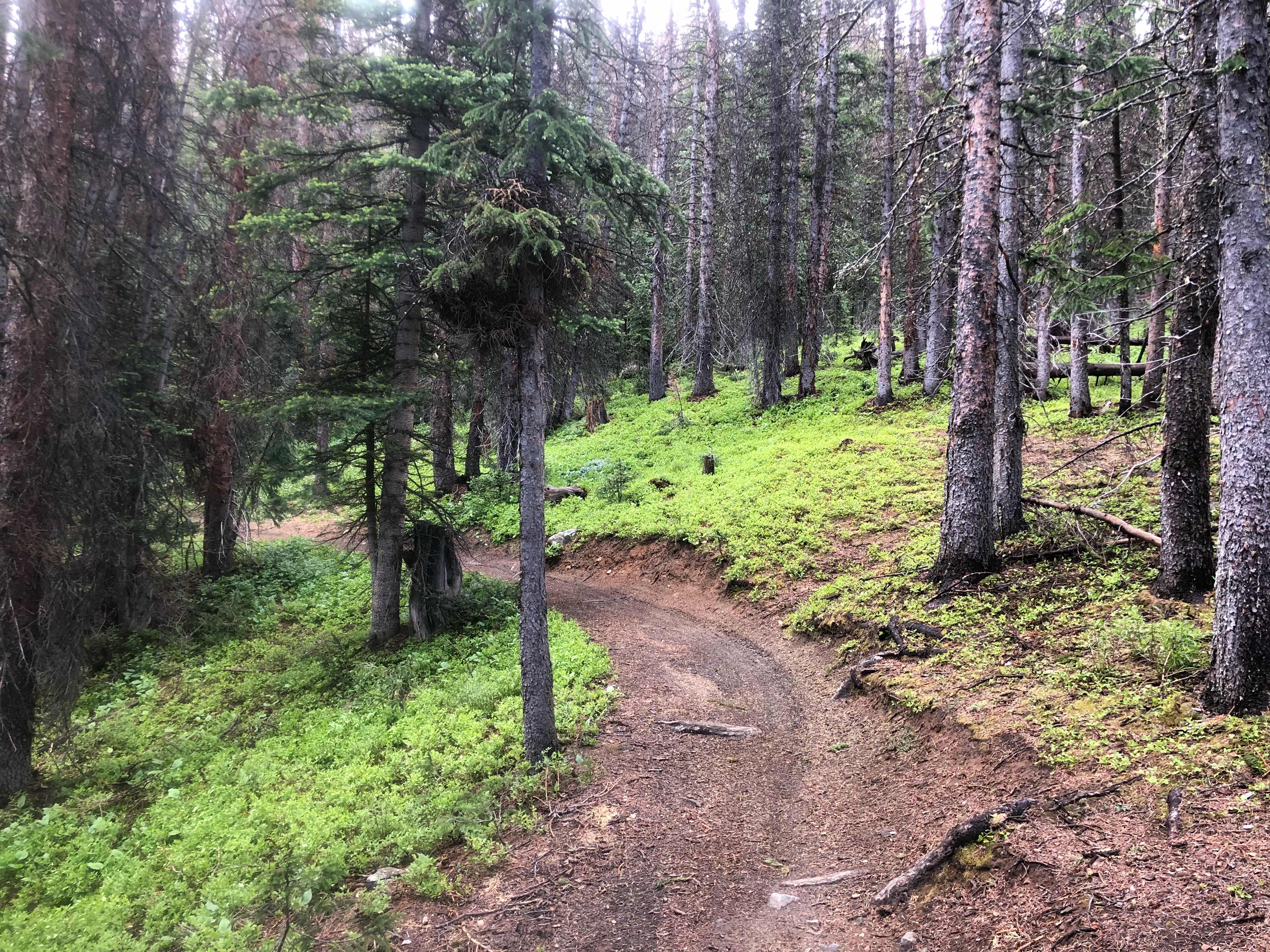 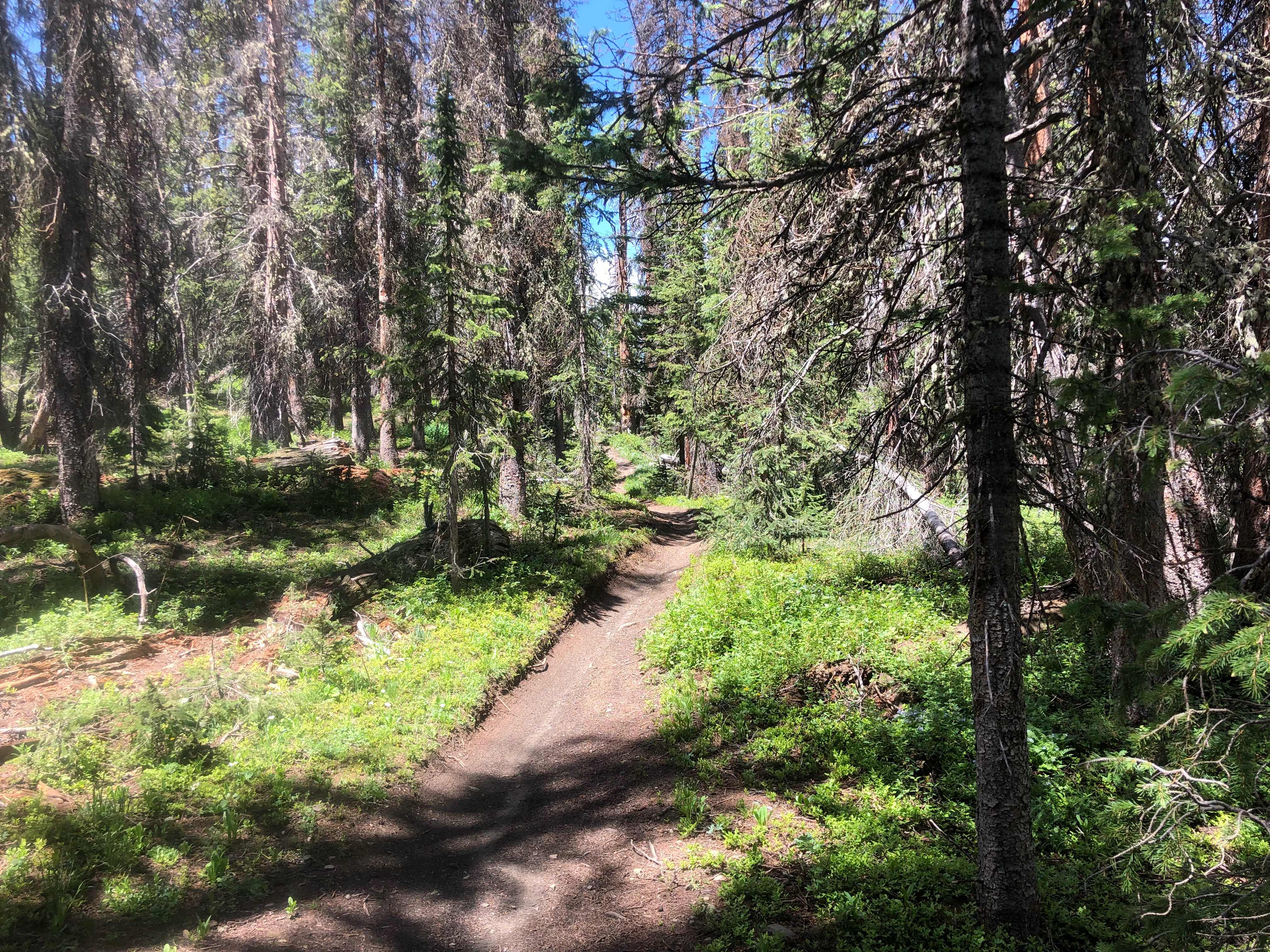 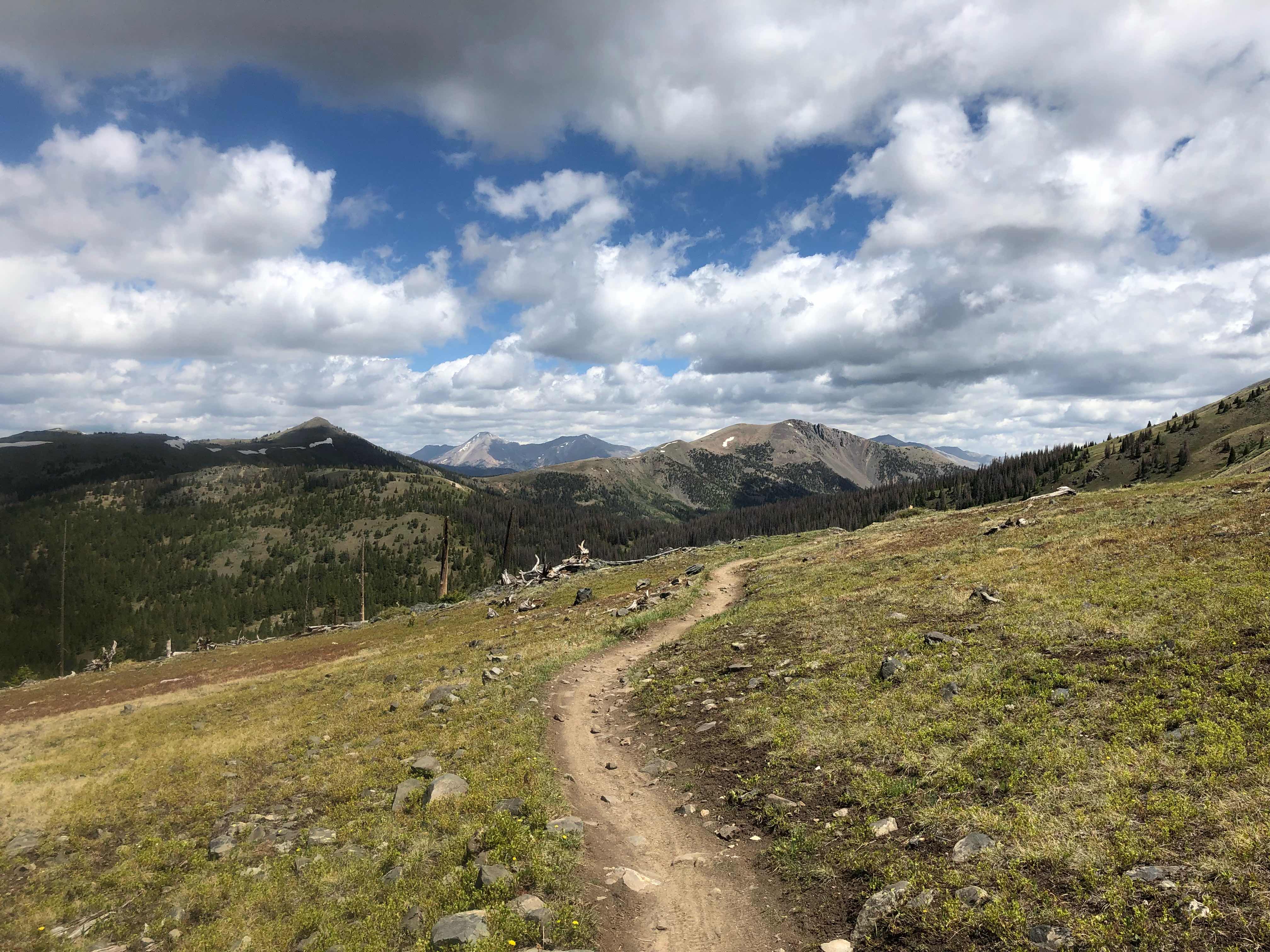 Beginning of the Collegiate mountain range
I really enjoyed the lack of rain today. It was a little bit windy, but at least I was dry. The day passed by pretty quickly due to the influx of cyclists I had to dodge around. Before I knew it I was only a few miles from Monarch Pass. I have driven over this pass several times on my way to Colorado Springs. It is one of the few times in my hiking career that I knew what to expect before getting there. I had sent myself a resupply box to the general store at the top of the pass. Due to mitigating circumstances this box cost me $100 to send. I didn’t realize that there was a town I could hitch to from the pass or I wouldn’t have sent the box there. Since I spent so much money to send four days worth of food I had decided not to go to Salida. I was going to get my box, charge my electronics, and hike on. Well with spending 2 days of hiking high miles in the rain I decided town sounded pretty good. I even met a couple named, Doris and Bill who were doing a day hike. They offered to give me a ride to town once they finished their hike. That made my decision for me. A free ride to town and I didn’t even have to stick my thumb out! I made it to the general store by 2:30. I ran into a few of my friends that I hiked some miles with on the AT, Honey Buns and Knock on Wood. They filled me in on where to go in town. I even got to enjoy a few chili cheese hot dogs while I waited for Turtle to arrive. He had camped less than a mile from me last night. He had made the same decision as me, to quit early and get out of the rain. He showed up to the general store about an hour after me. He was also keen on going to town, but mainly because his resupply package wouldn’t arrive until tomorrow afternoon. Shortly after he arrived, Doris and Bill returned from their hike. True to their word they gave us a ride into town. They also offered to host us at their house. We decided to get a hotel room though. I’m uncomfortable most of the time accepting hospitality from friends and family, much less strangers. Salida is a cute touristy town located about 23 miles from Monarch Pass. Doris and Bill were great to talk to and the drive went by quickly. 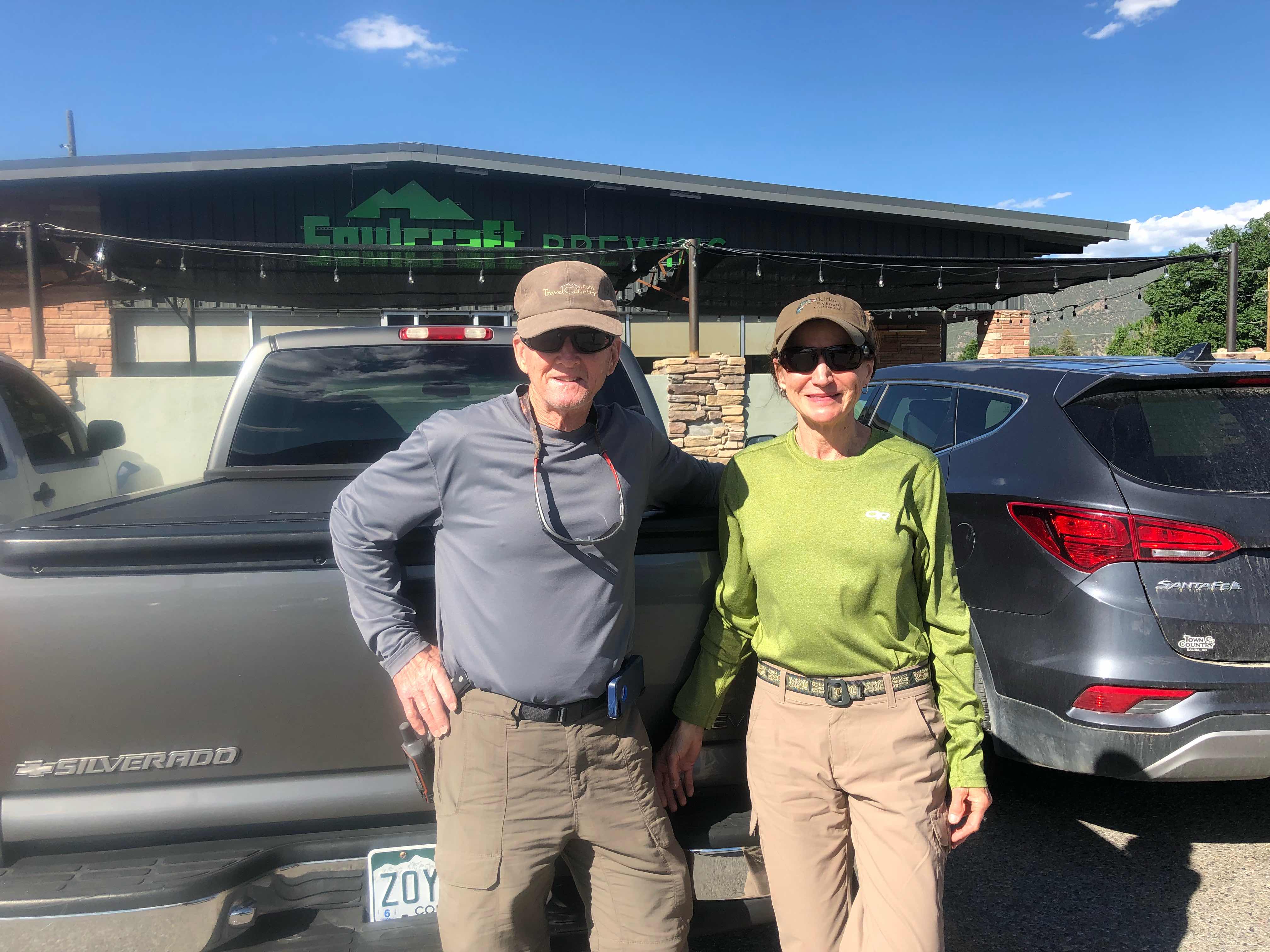 Bill and Doris Thanks for the hospitality
We were dropped off at the local brewery. Turtle and I decided that was the best place to get on our phones and find a place to stay, plus there was beer. The town of Salida is a CDT gateway community. Meaning they have an outreach program for the local residents to learn more about the trail. The brewery had just hosted an event last week to inform residents about the trail. During the event they instruct their residents on how to be trail angels for hikers. The organizers explained how something so small as picking up hikers can help the town and economy. As a result the locals are extremely hiker friendly. The owner of the brewery, Tom, offered to let us stay at his house. Once again we politely declined. Tom then spent about 30 minutes calling local hotels to get us the best price. Tom’s son hiked the trail last year and he is one of the driving forces for turning this town into a gateway community.
Tom got use a relatively good deal at a motel down the street. Once checked in we did our showers, laundry, and planning for future sections. Before I knew it, it was after 9:00. We walked down to Dominos and picked up a pizza. By the time I ate dinner and took care of a few odds and ends, it was almost midnight. It is going to be hard getting up in the morning. 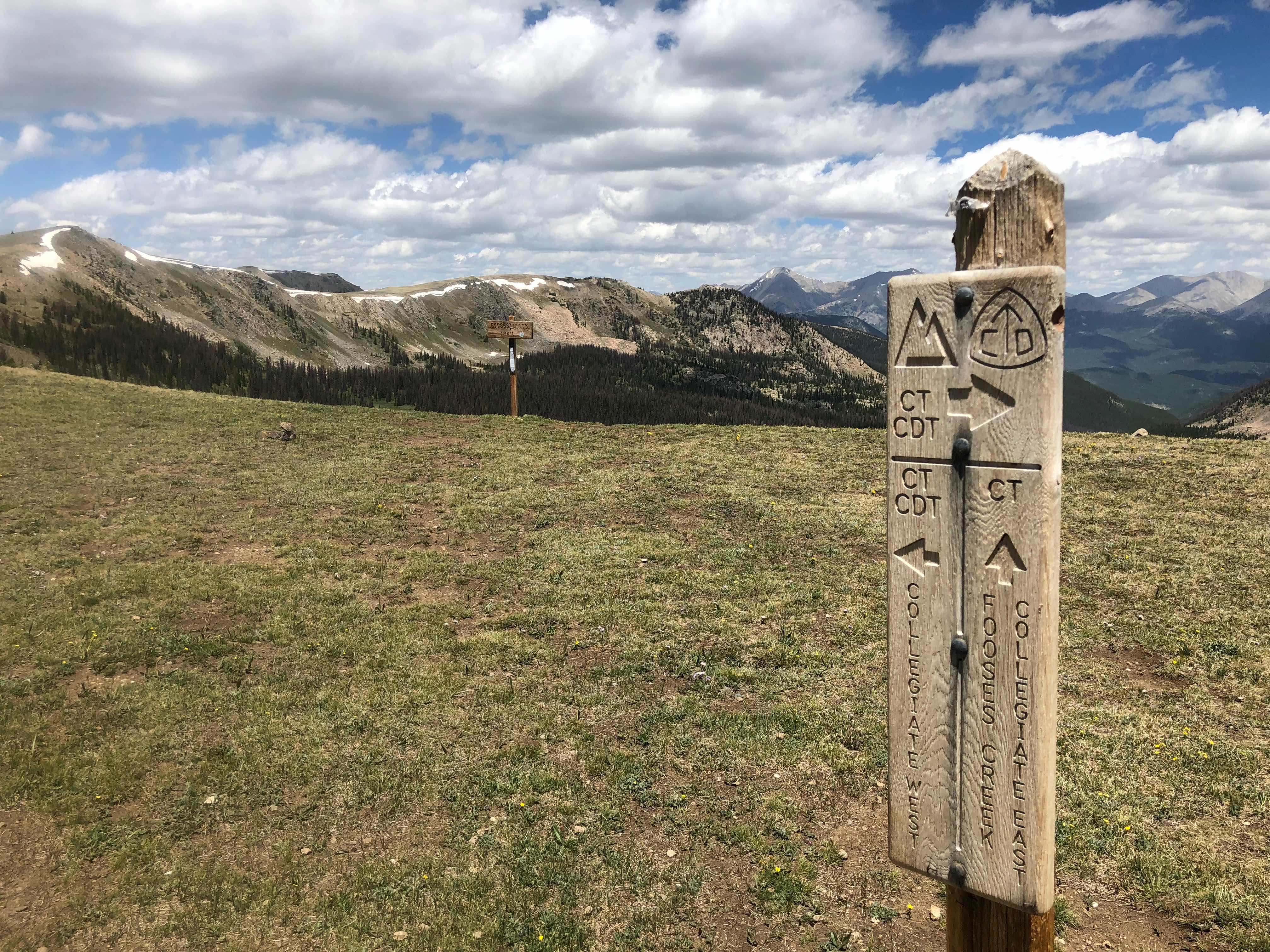 CDT and the CT temporarily split. We hike on the west side of the Collegiates while they stay on the East side 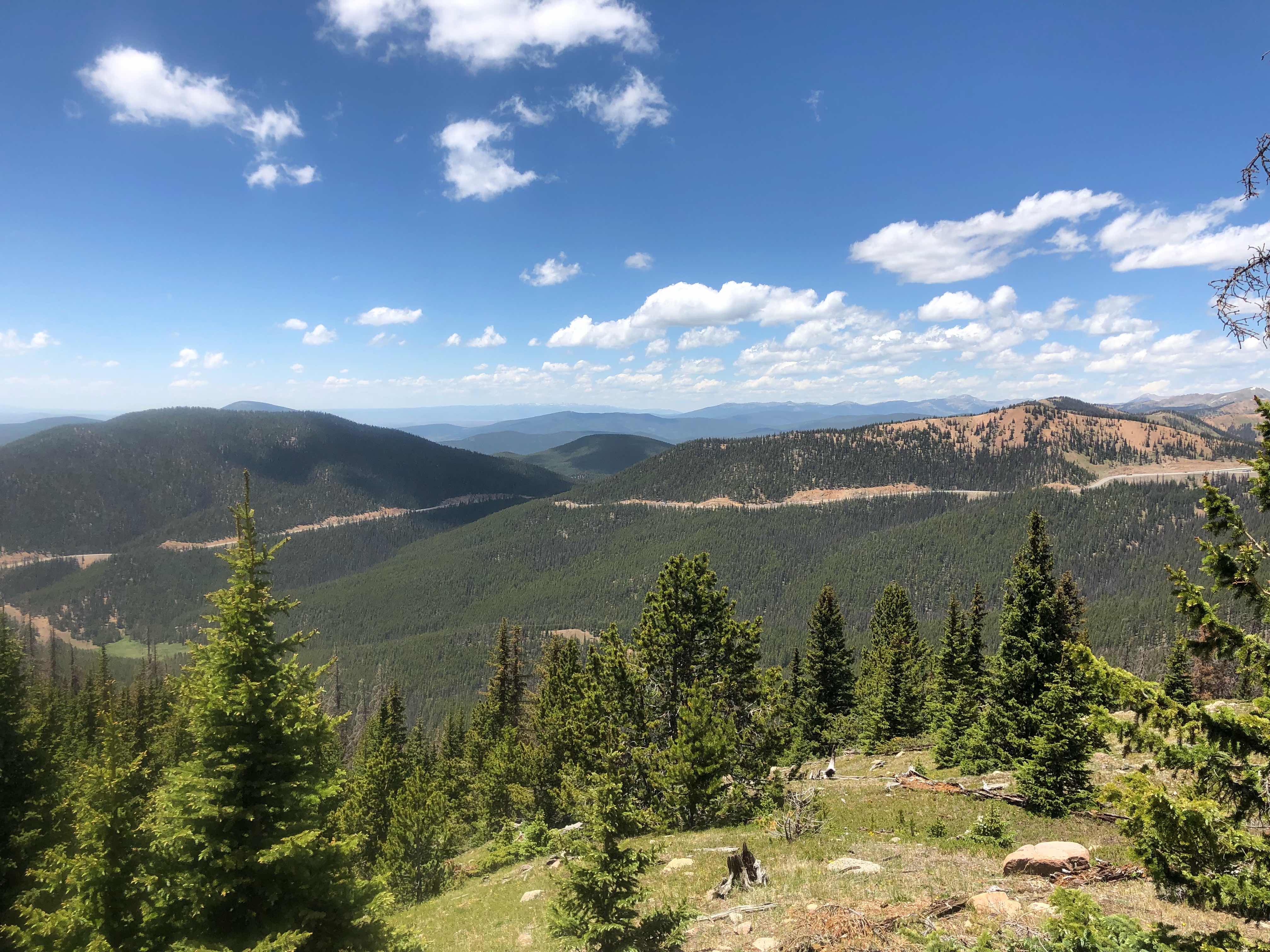 Highway 50 across Monarch Pass. So cool to have driven this road a few times 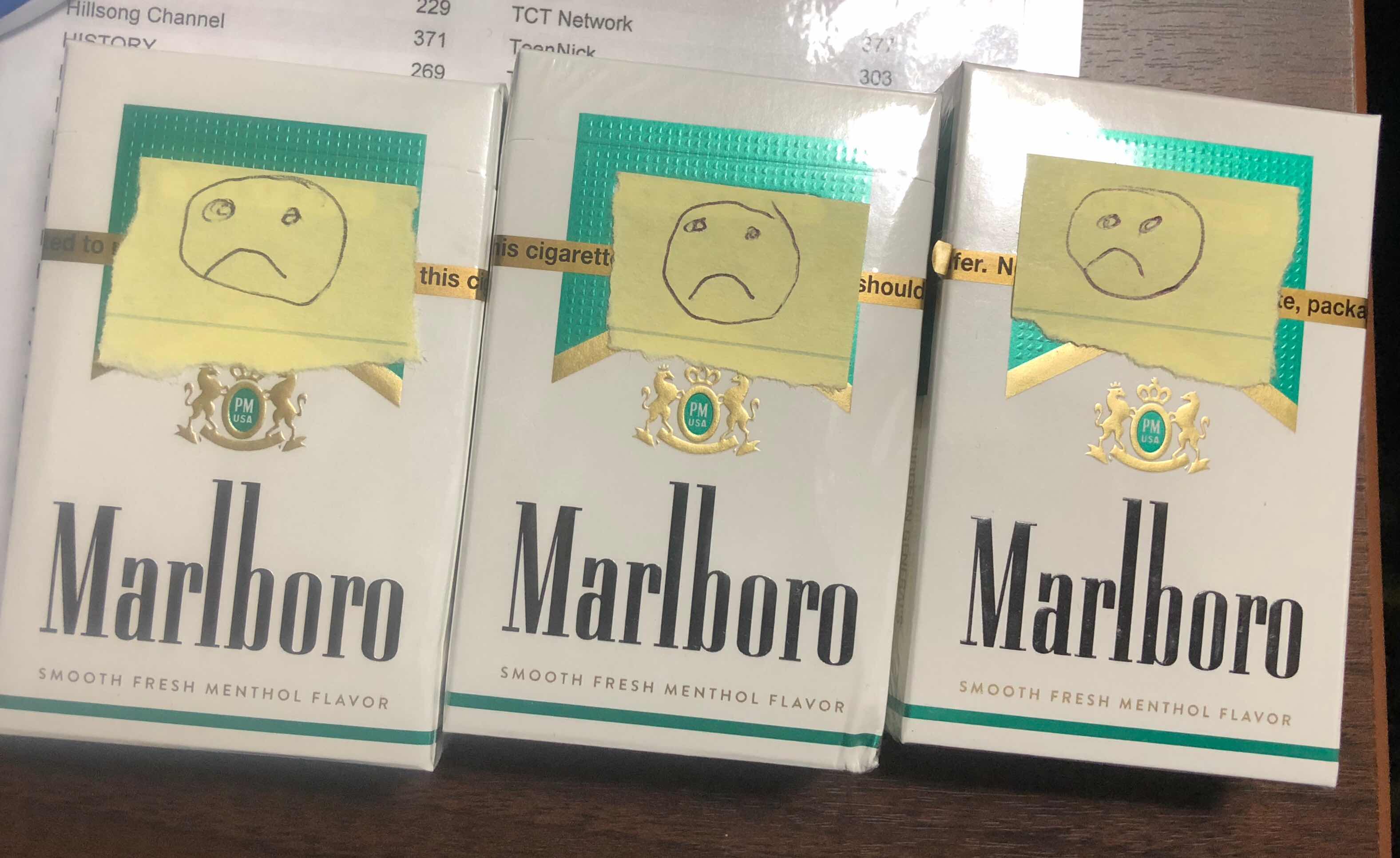 Dad’s hilarious message on my cigarettes in my resupply box 😂
"Life is short and we have never too much time for gladdening the hearts of those who are travelling the dark journey with us. Oh be swift to love, make haste to be kind."
- Henri Frederic Amiel