I slept like a log last night. Turtle told me the Fox came back in the middle of the night. He yelled at it and turned his flashlight on to scare it away. I never heard anything. I was up and out of camp before six o’clock. My plan was to hike twenty five to thirty miles today. It wasn’t until a few miles into my day that I noticed today was the summer solstice. In the hiker world the summer solstice is also known as hike naked day. That is not something that I participate in. I decided instead to hike my longest day yet, a 35 mile day. In the end I would fall short of my lofty goal, but not for lack of trying. Today was the most elevation gain and loss that I’ve hiked on this trail. It was also one of the most beautiful days. I started off by walking on an old railroad line. The railway has long since been abandoned, but the old tread made for easy hiking. 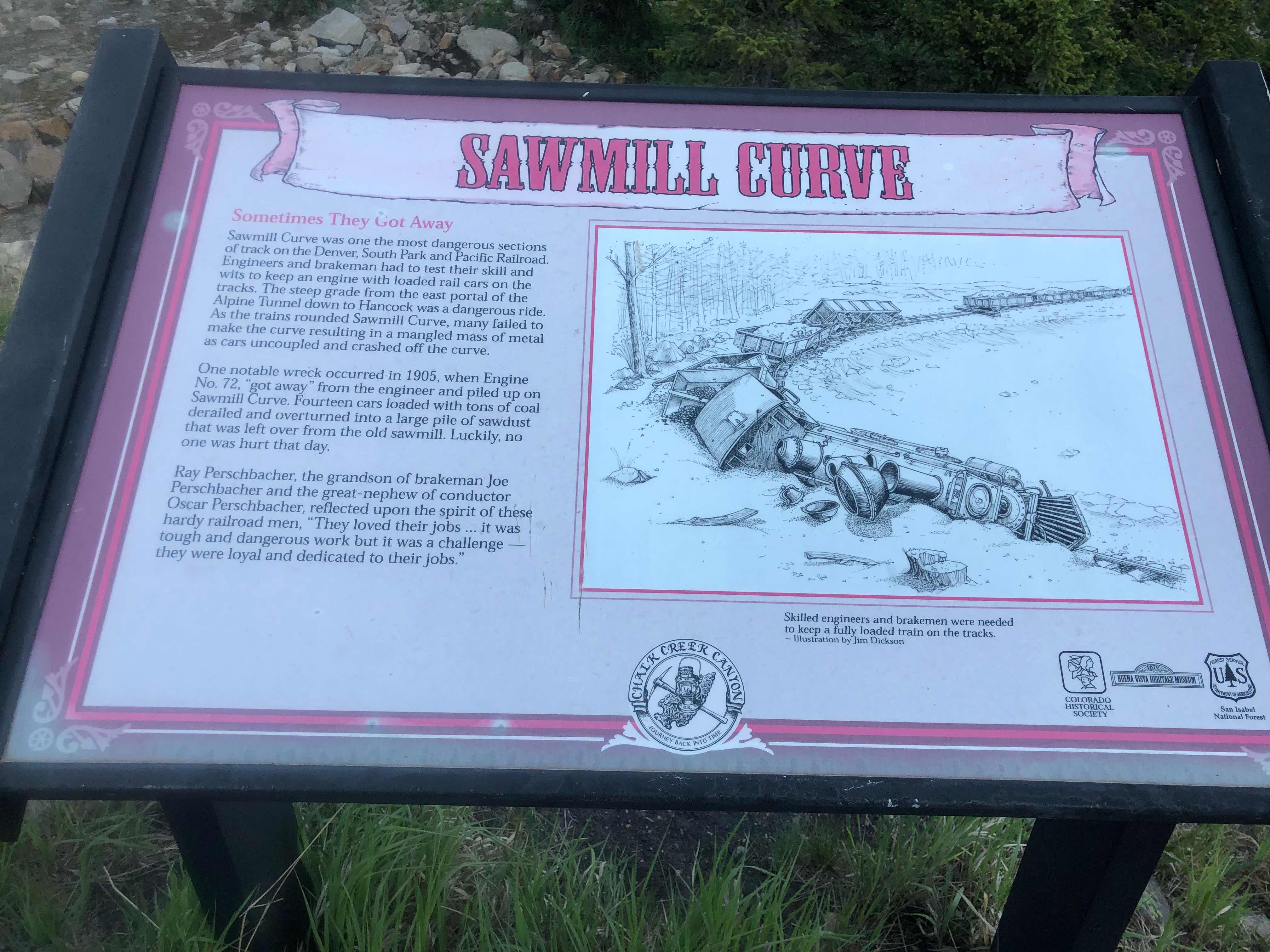 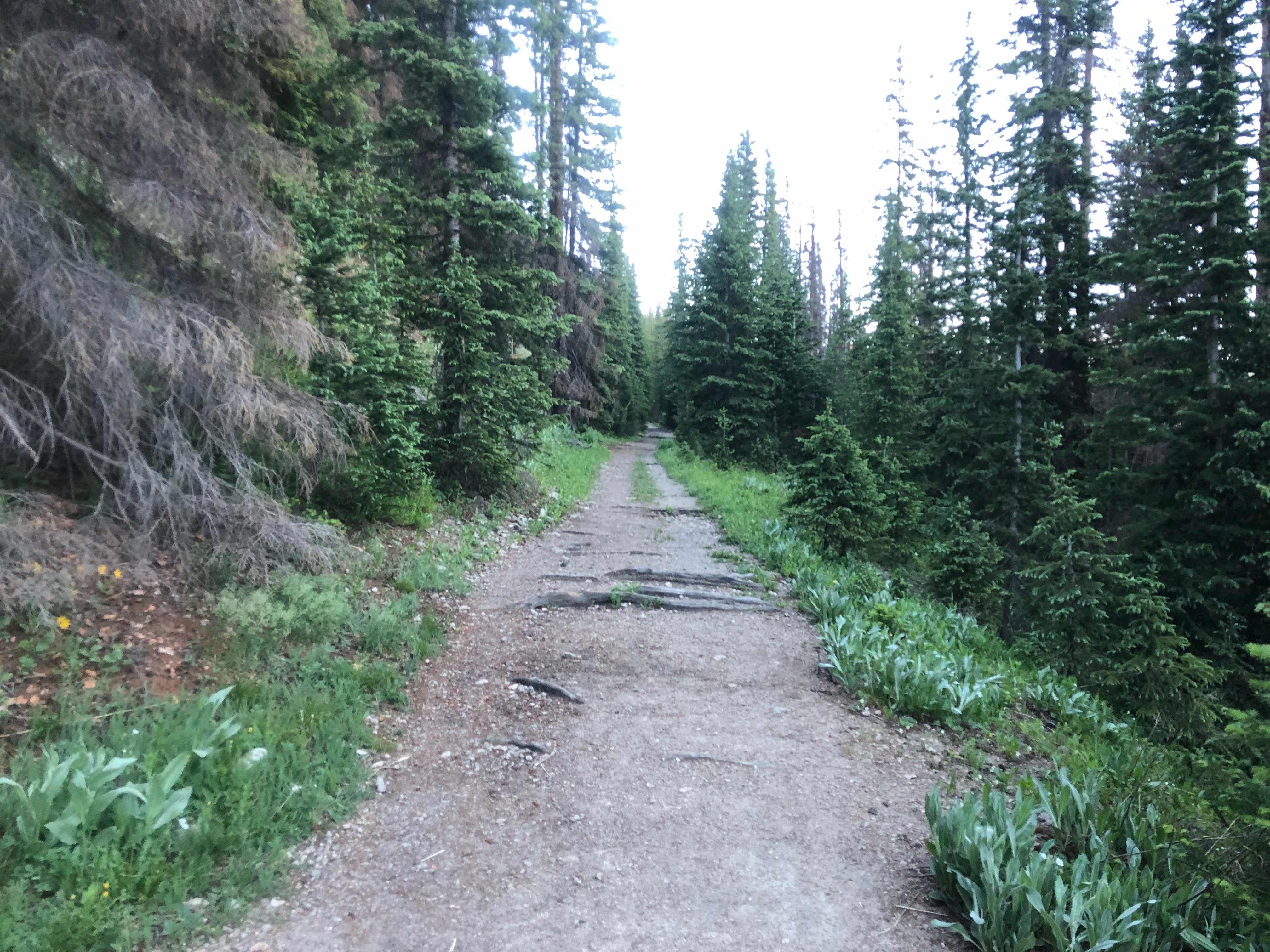 Easy tread
Once I left the railroad behind the fun really started. The theme of the day was to hike up and over a steep mountain pass, then drop down into a basin, then do it all over again. The passes and surrounding moutain landscapes were amazing. It was a difficult balancing act to take it all in and still make good time throughout the day. I was lucky that today was the longest day of the year. I needed every minute of daylight to come close to achieving my goal. 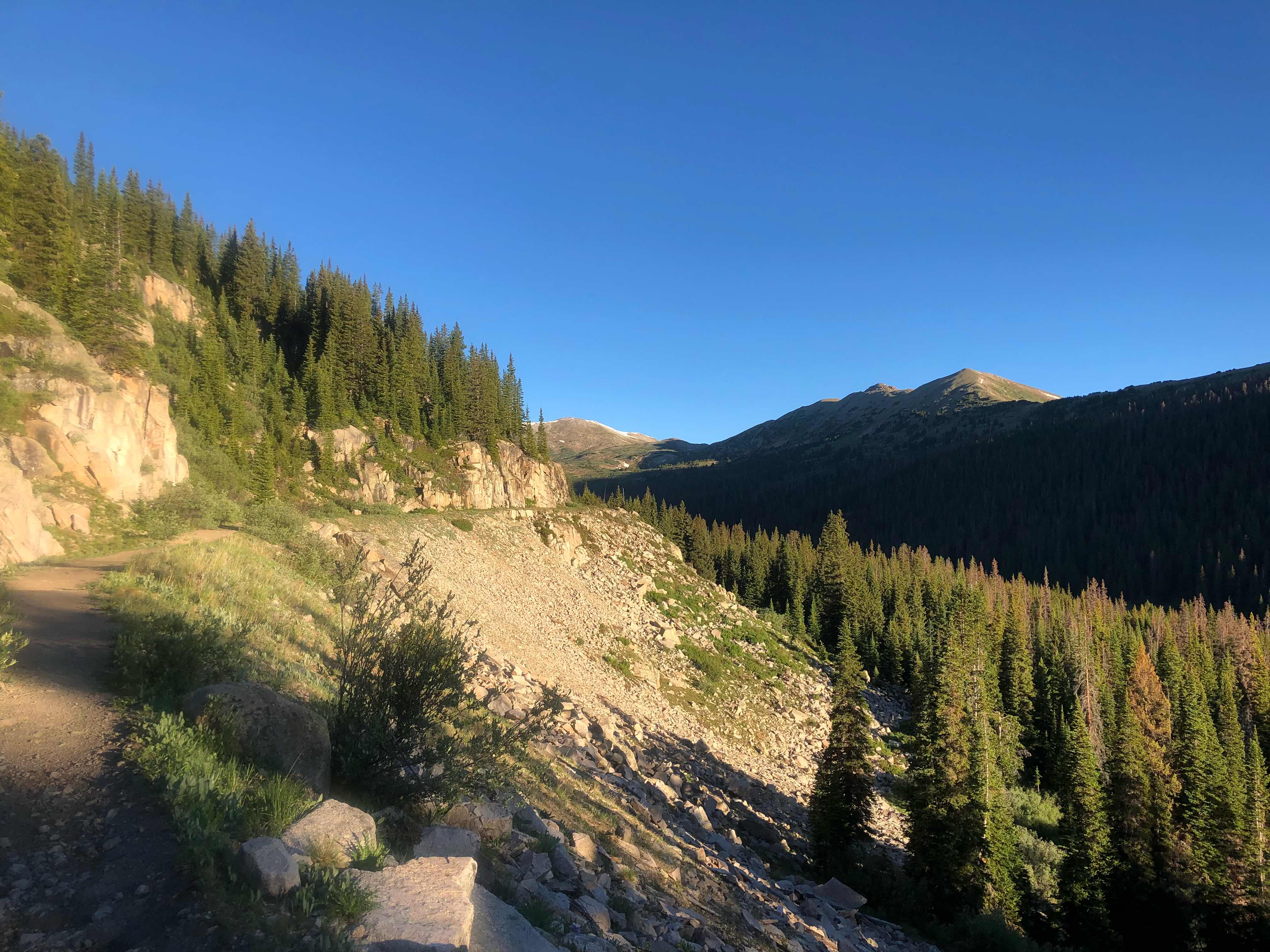 Still on the railroad 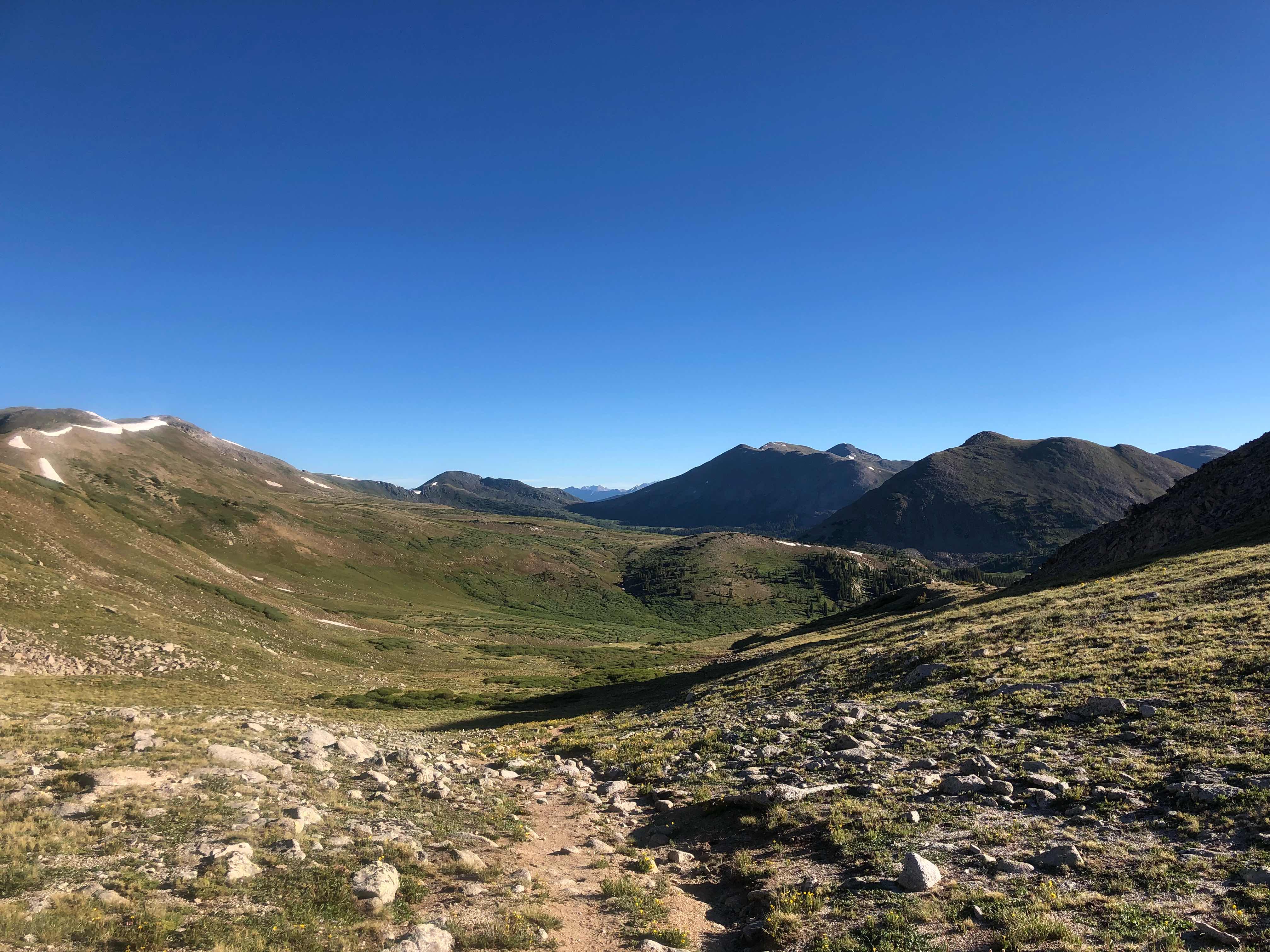 Heading down from the first pass
I felt really good today. Yesterday was kind of a struggle. I had expected to feel really refreshed after having a zero day, but I felt exactly the opposite. I guess I just needed an extra day to readjust to the rigors of thruhiking. I spent the first half of the day completely isolated. I didn’t see another soul from the minute I left Turtle, shortly after breaking camp, until fifteen miles into my hike. I was able to hike for three hours, roughly nine miles, without taking a break. I found a lovely spot, out of the wind, ate a snack, put sunscreen on, had a tinkle, processed some water, and smoked a cigarette. I was able to do all of this in under fifteen minutes. Sometimes instead of counting minutes, I count miles lost. Typically in fifteen minutes I’m able to hike roughly one and a half miles. I timed my break so that it came just before starting another big climb. My legs were nice and refreshed from my break and I knocked out a 1,500 foot climb quickly. I was rewarded with a spectacular view from the top. 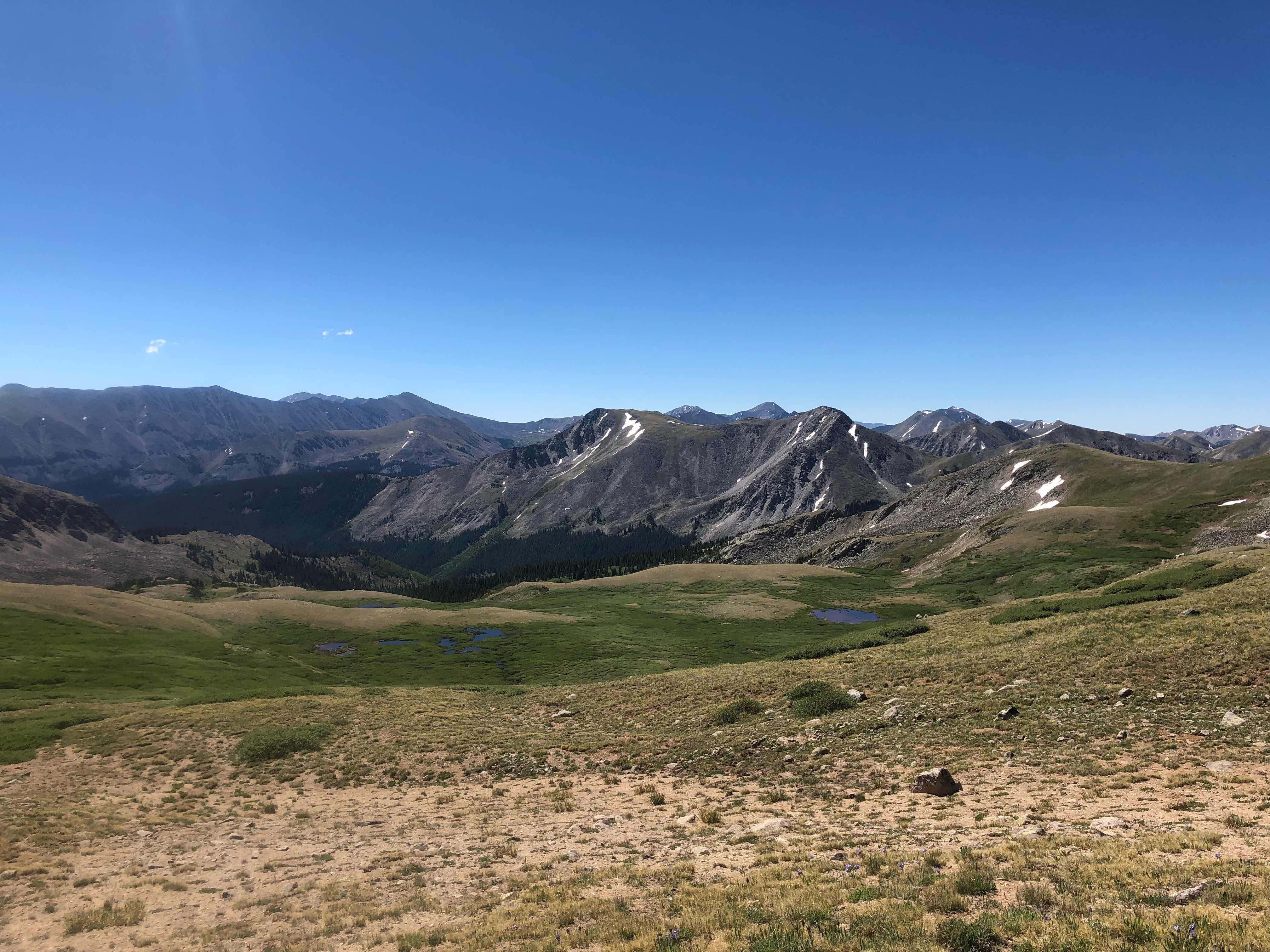 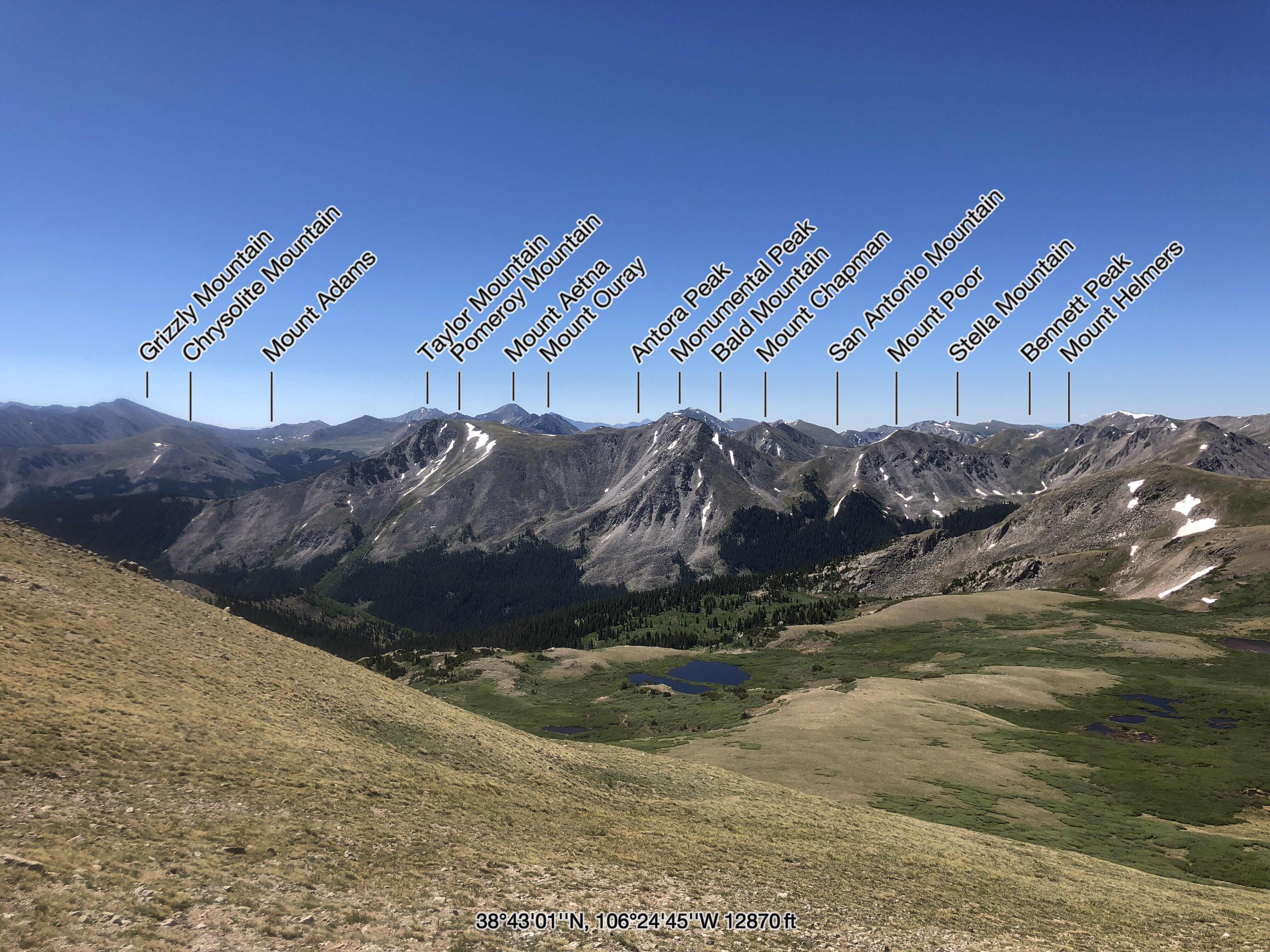 Almost the same picture as above, but with the corresponding mountain peaks overlaid

Panoramic view
Around mile eighteen I was starting to fade. I took another break and ate a few bars and had some caffeinated Mio. I also allowed myself a thirty minute break. The wind had really picked up so I made sure to find a good spot out of the wind. Just before taking my break I ran into two older guys out for a day hike. I was going downhill through some scree, while they were climbing uphill. We had a nice, but short chat. They informed me that there were two other thruhikers just ahead of me. I was hopeful that I could catch up to them by the end of the day. 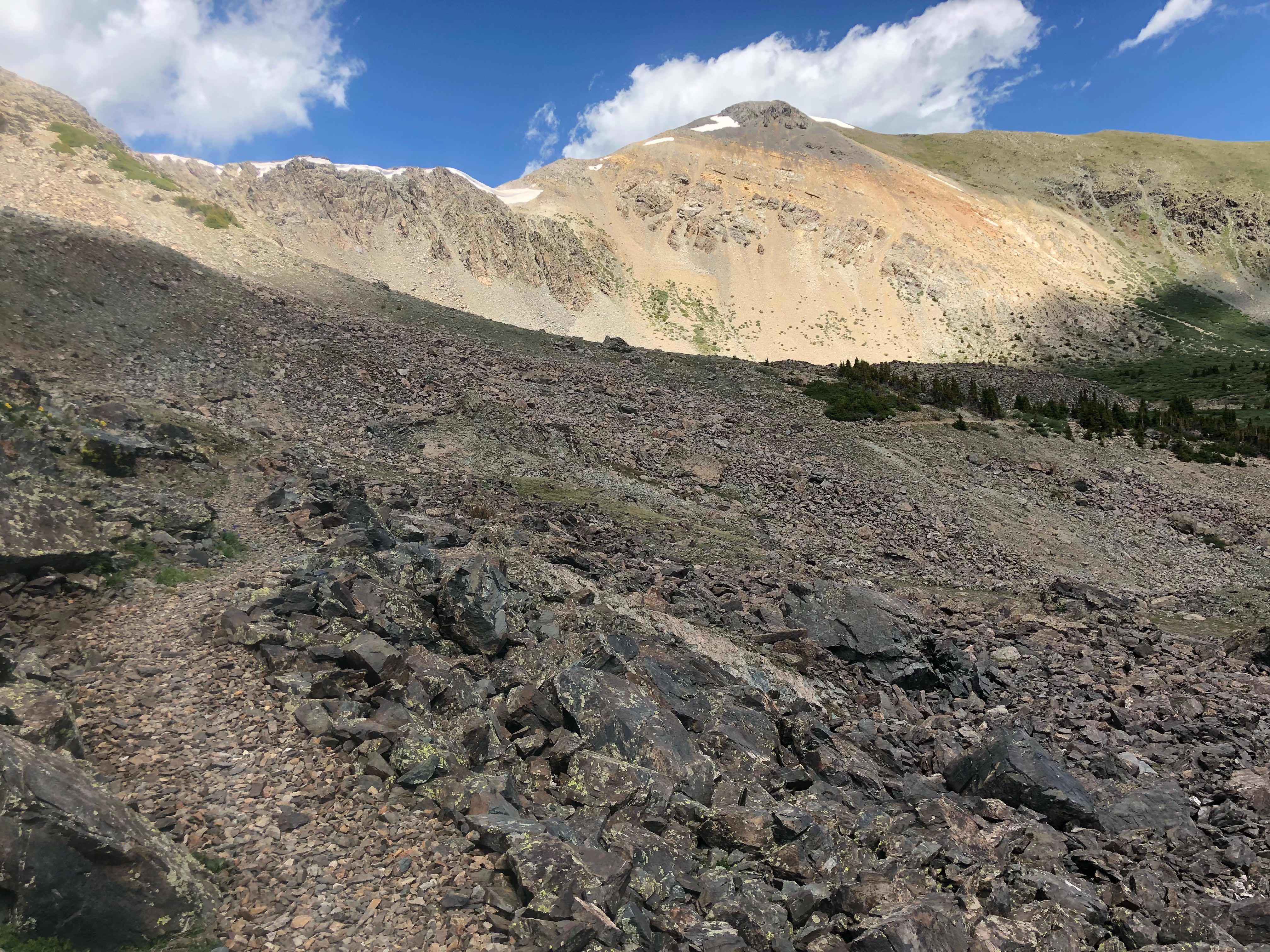 Hiking though the scree field 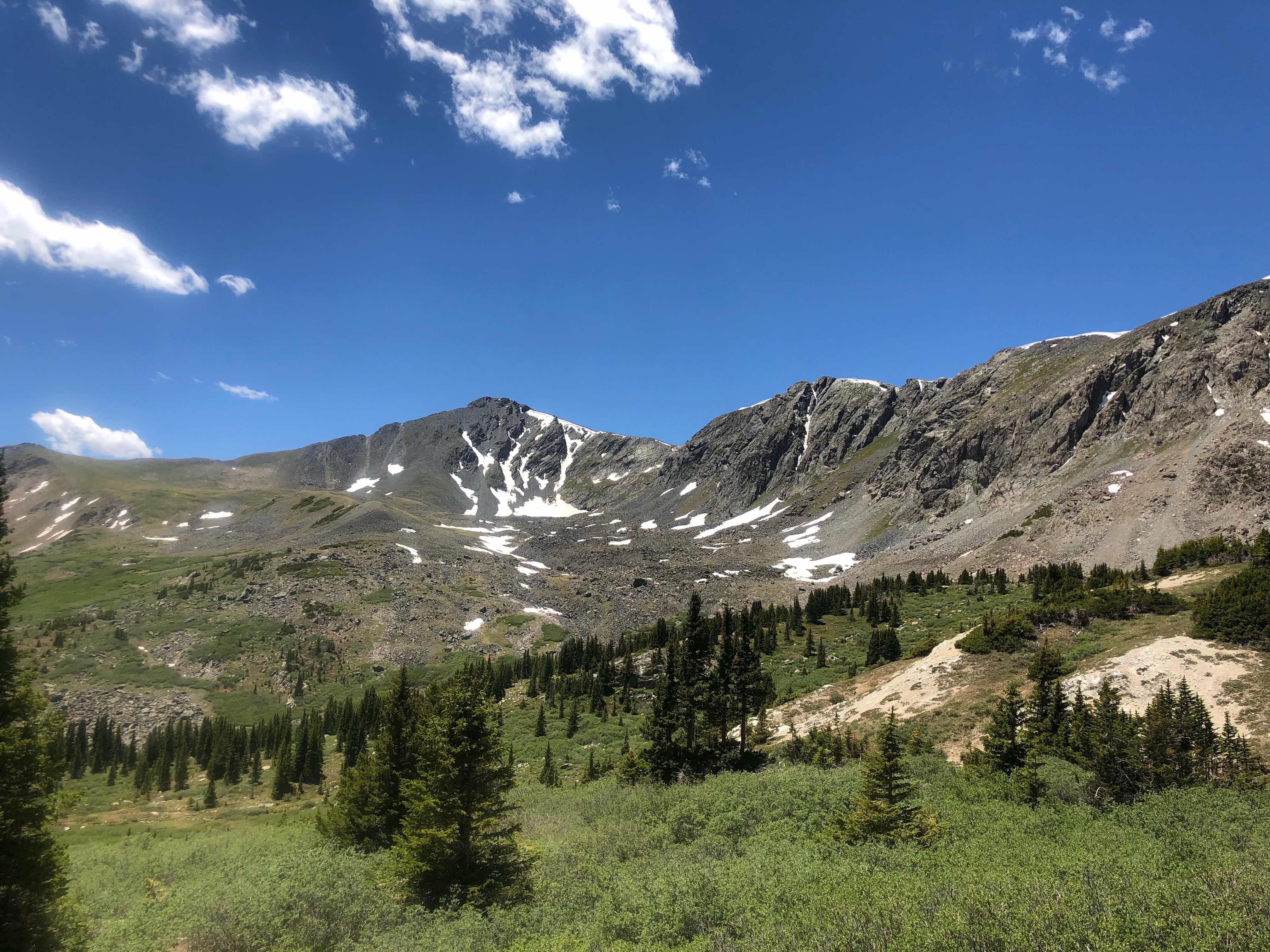 It a bad place to take a break
I spent most of the day listening to a podcast about WWI by Dan Carlin. The name of the podcast is Hardcore History. I’ve really enjoyed listening to historical podcasts. I feel like I’m learning something while I hike. I ended up catching up to the other thruhikers around mile twenty two. I had met them last week. Chippy is a female hiker from Australia and Duesces is a guy from Colorado that used to work at Crested Butte. We would spend the next few hours playing leapfrog with one another. By this point of my day I was stopping every hour or two to take a break. The elevation change was really starting to take its toll on me. 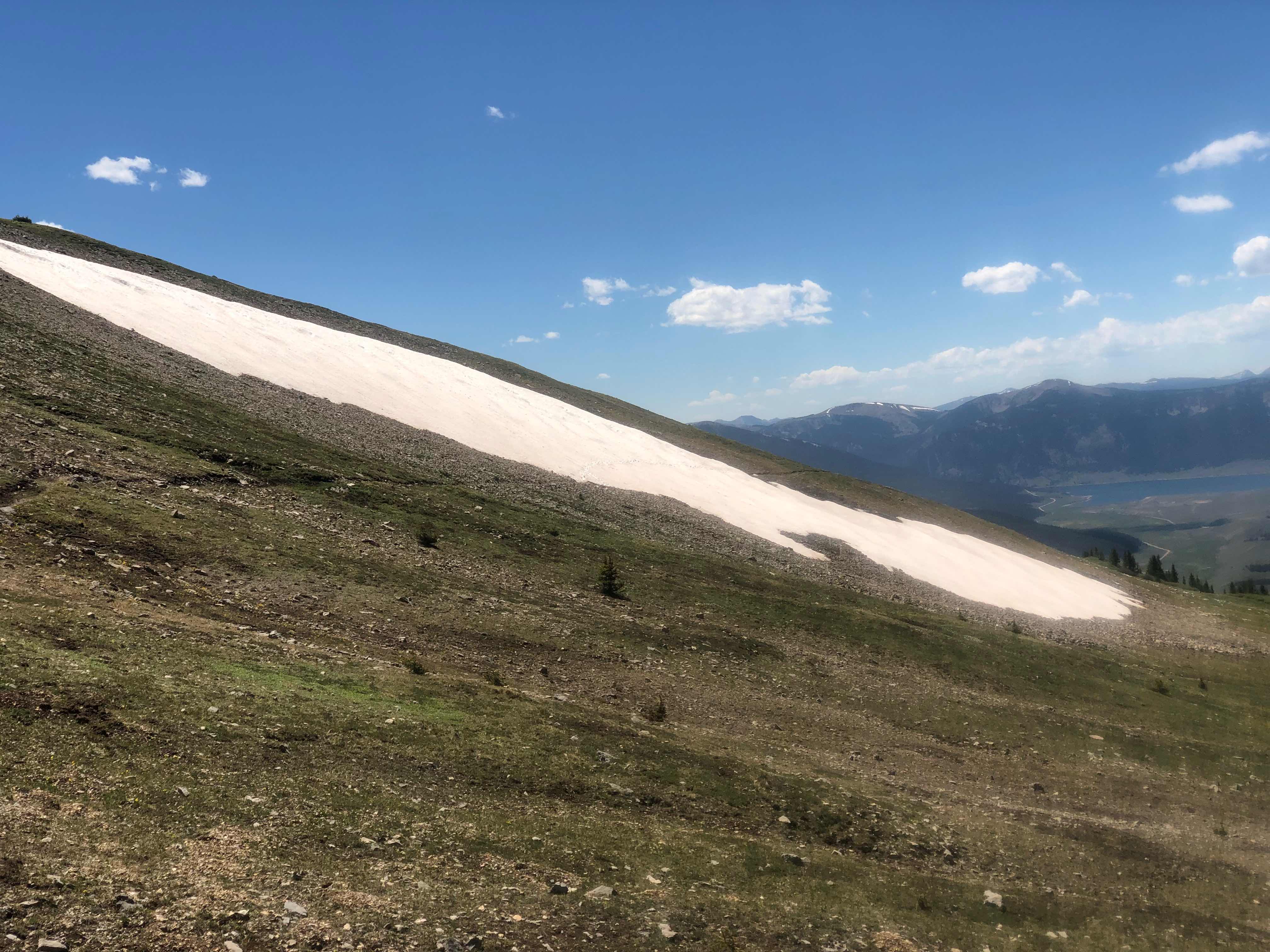 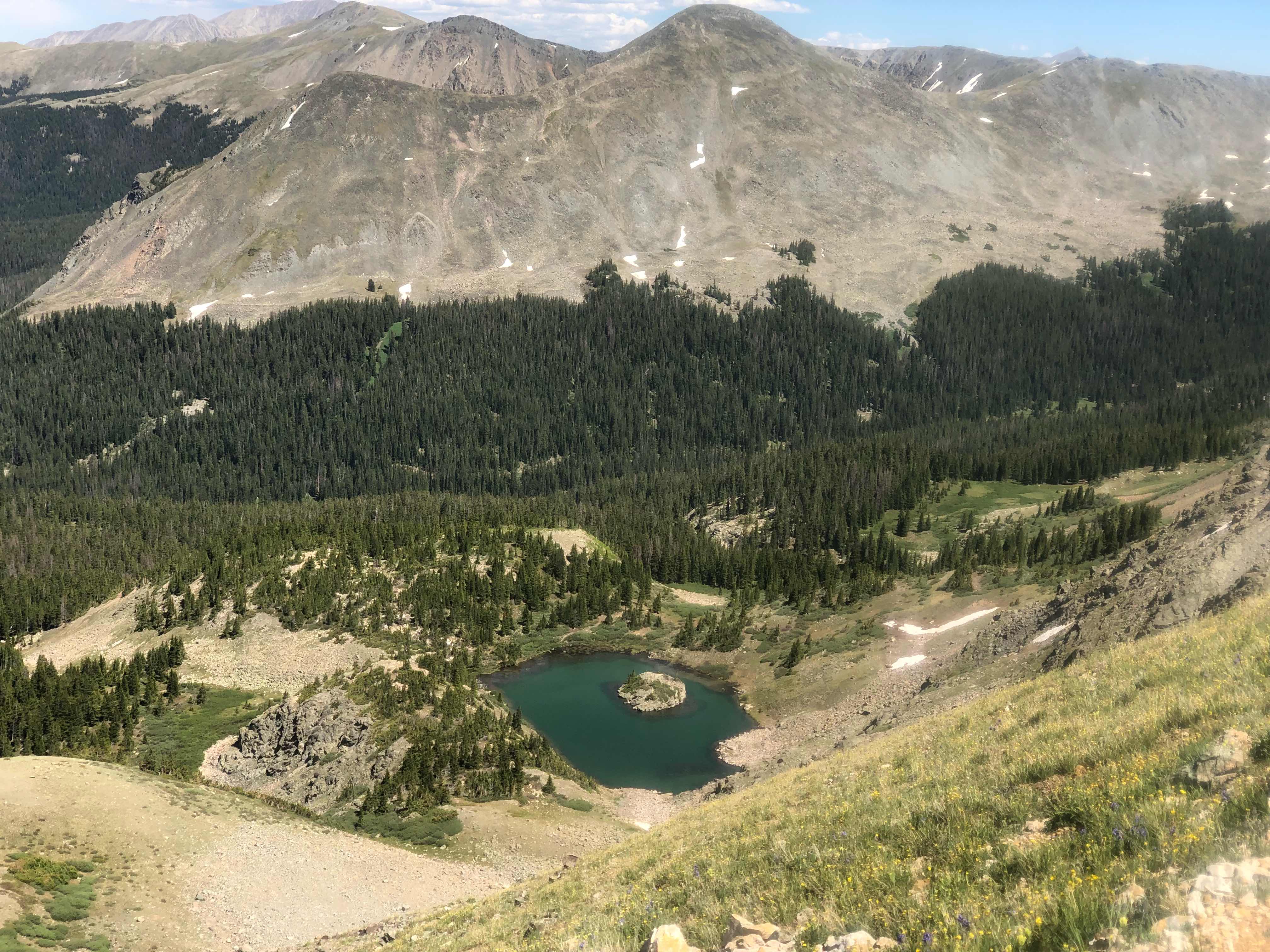 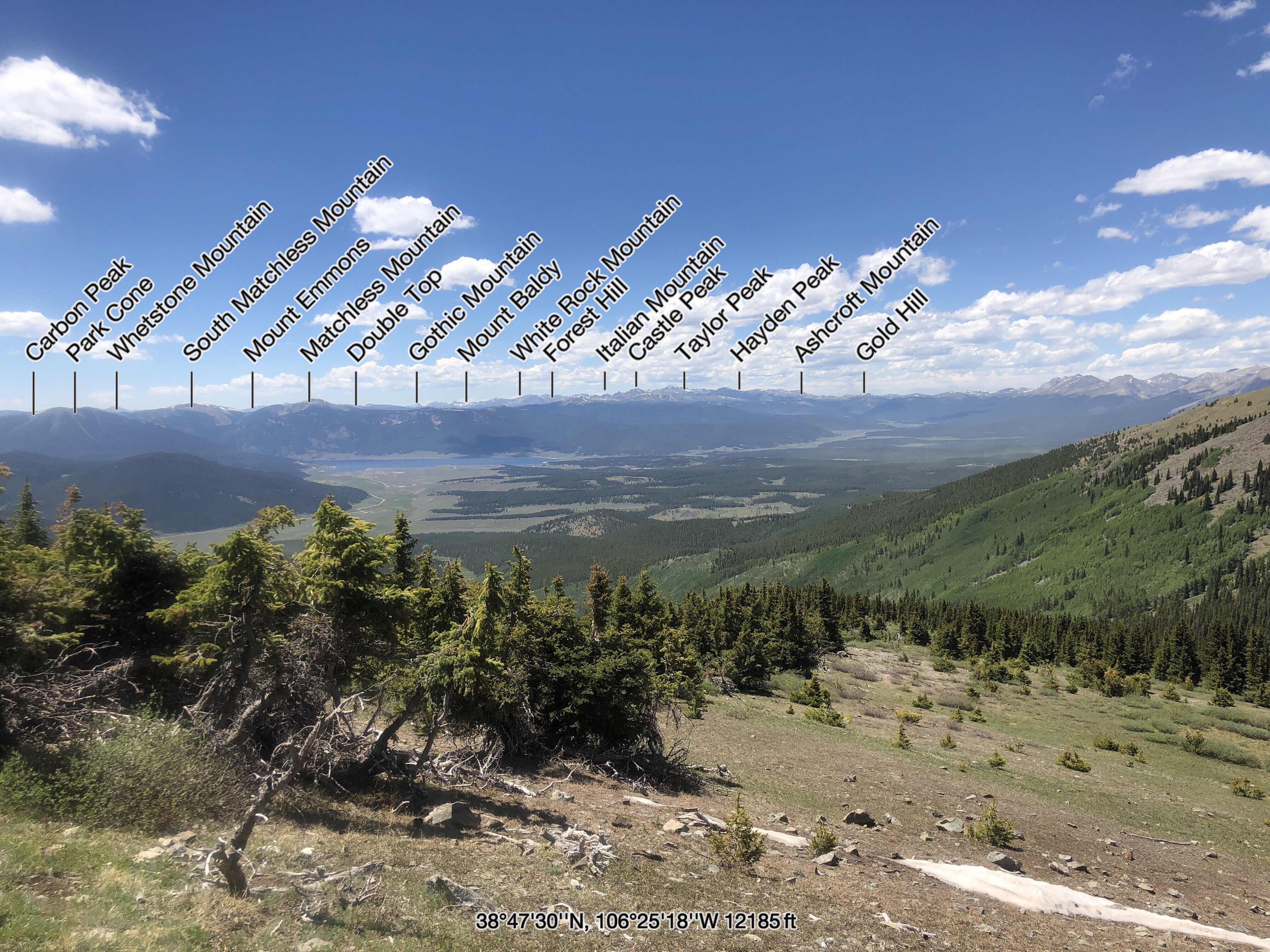 I love the Peak Finder app 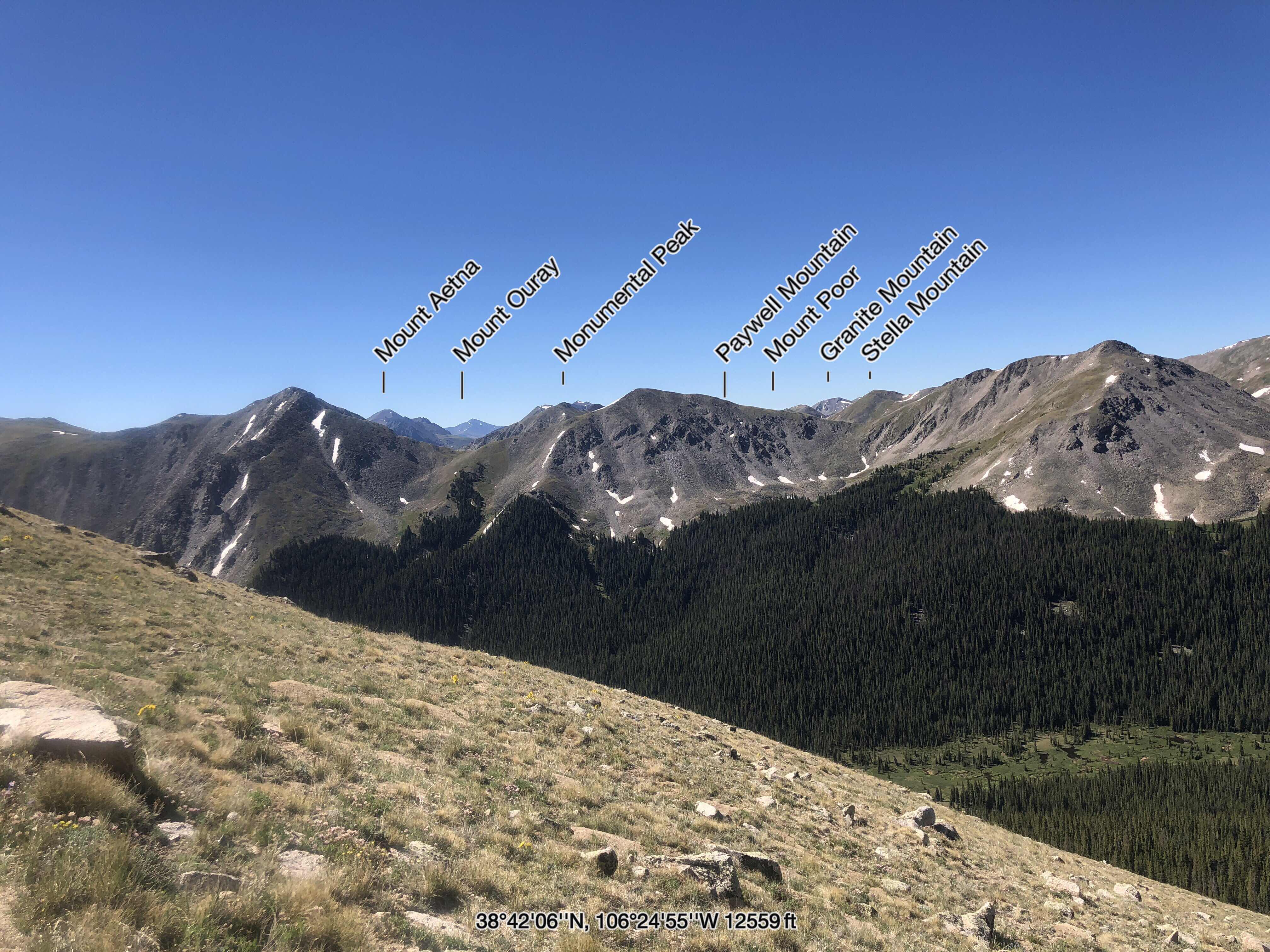 So nice to know what I’m looking at 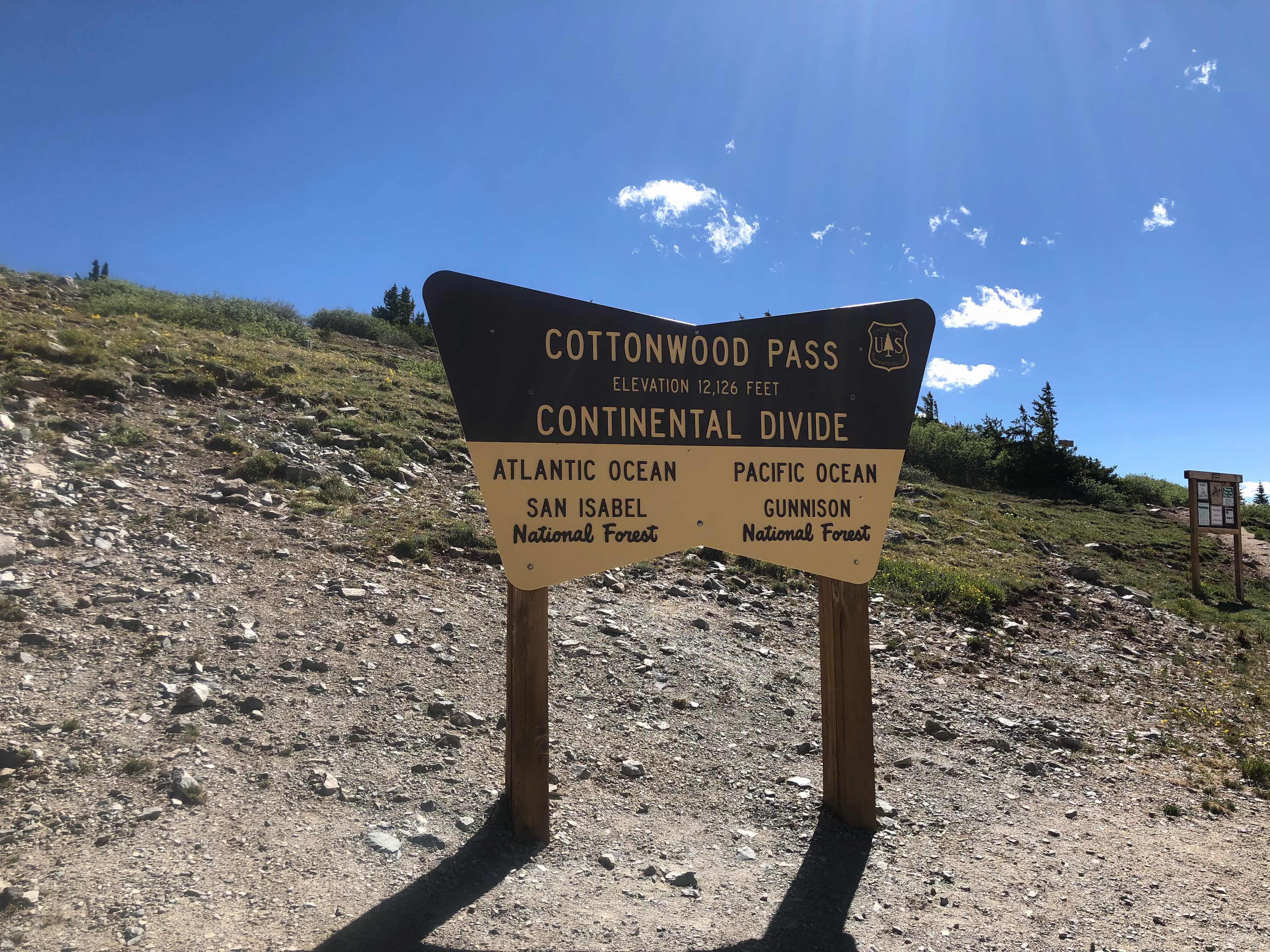 Mile 24
I took another long break at Cottonwood Pass. This is usually a very busy County Highway, but the road is closed this summer for construction. I spent my break chatting with one of the construction workers. He was very familiar with the area and told me all about the mountains in this area. He also used to live in Telluride, so we chatted about living there. I still had eight miles to go and it was getting late in the day. I summoned my remaining strength and hiked on. 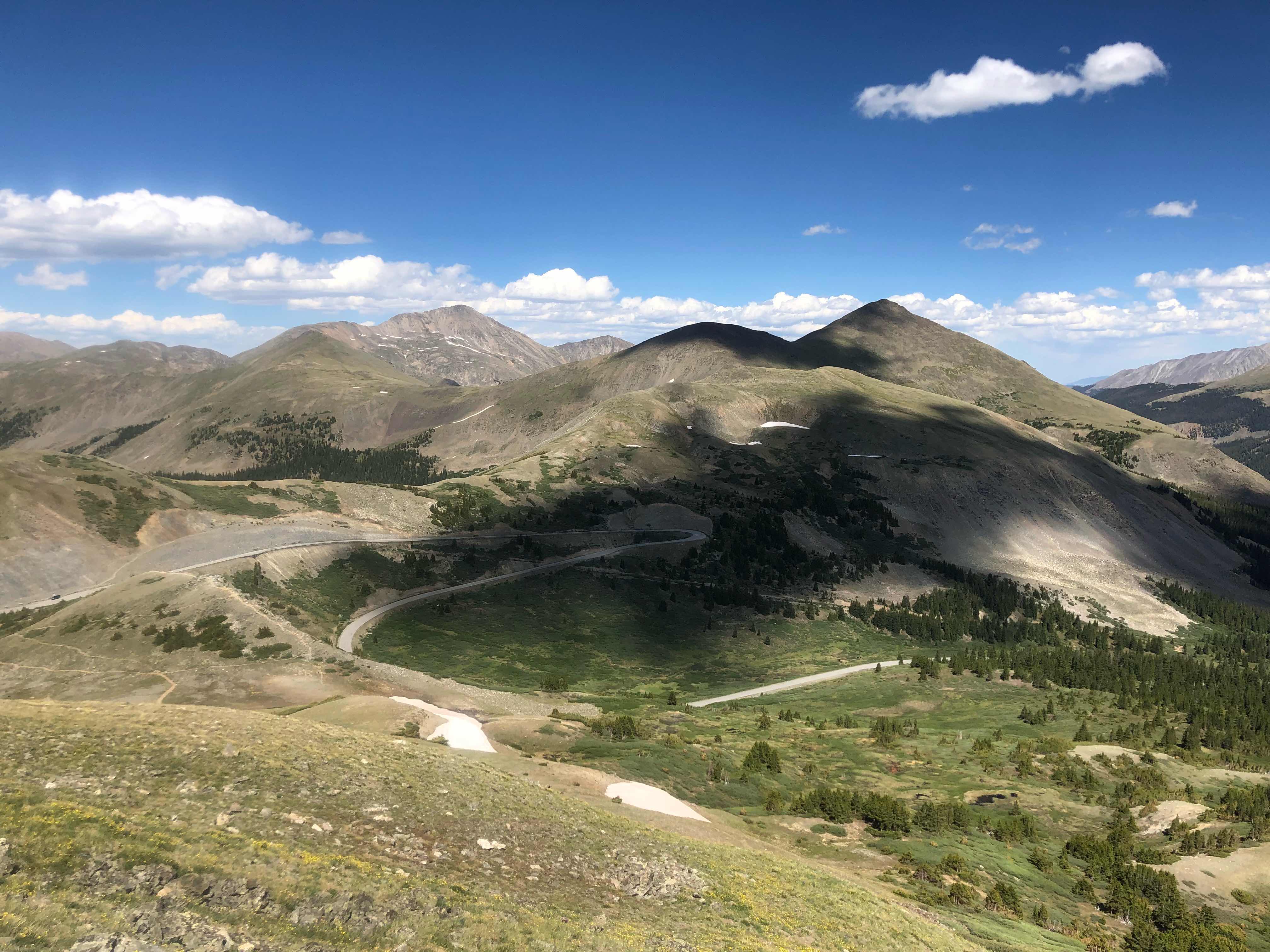 Cottonwood Pass from above
I had a relatively short section of uphill, followed by a very long downhill. Once I hit the downhill portion I went through a nice forested area. Most of my day was spent above tree line and I enjoyed being in the forest. Plus, since I was going downhill I was able to just cruise. 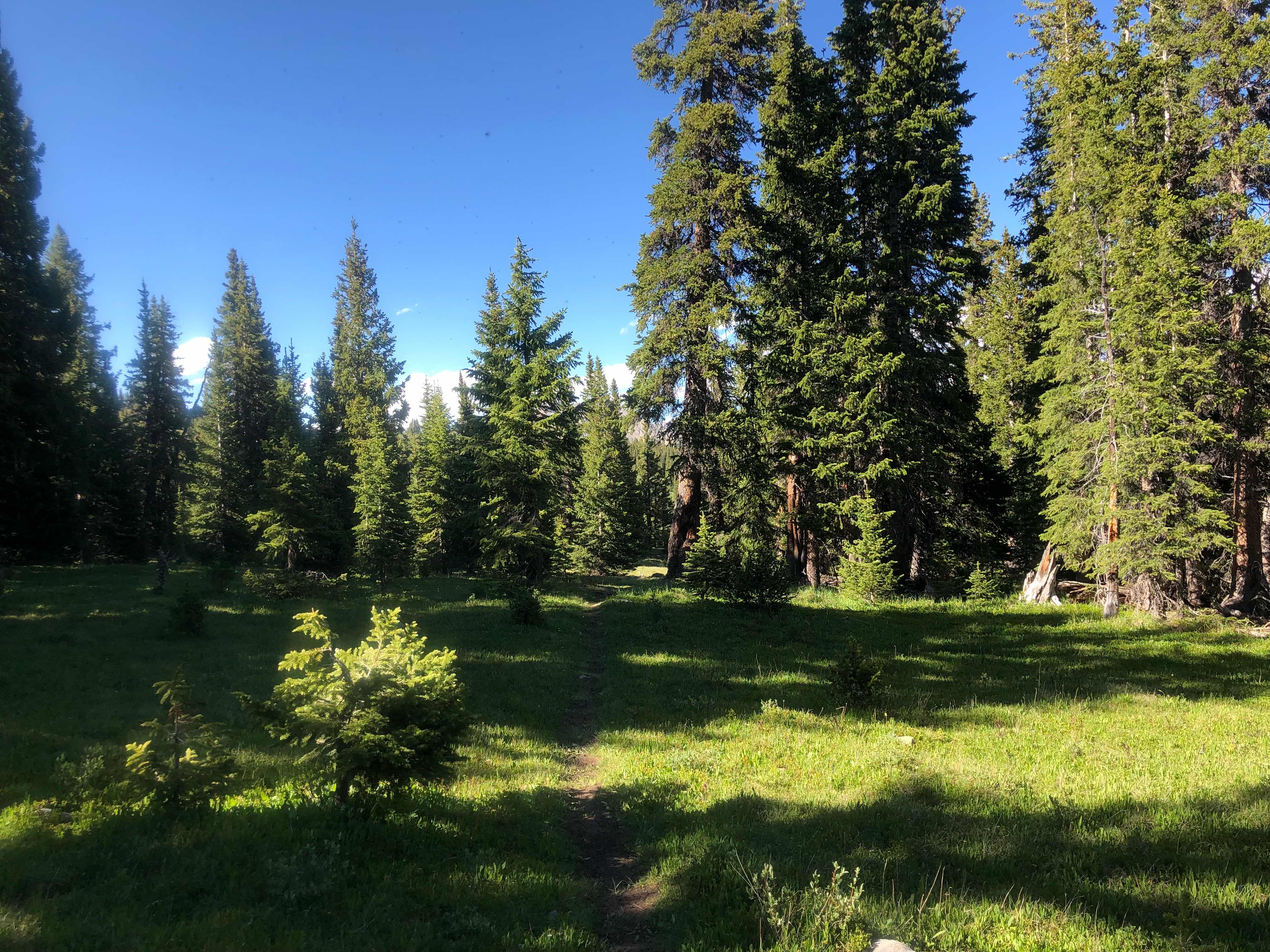 Nice green forest
About three miles before the end of my long day, I hit a rather large stream. I couldn’t find a dry way across and I didn’t relish the idea of getting my socks and shoes disking wet at the end of the day. I resigned myself to taking the time to take them off. The water was really cold, but I was in and out pretty quickly. Once I hit the other side I had to stop and dry my feet and put my socks and shoes back on. It was at this point the Action Jackson and three others caught up to me. They decided to cross in their socks and shoes. They barely even paused to say hello before flying past me. 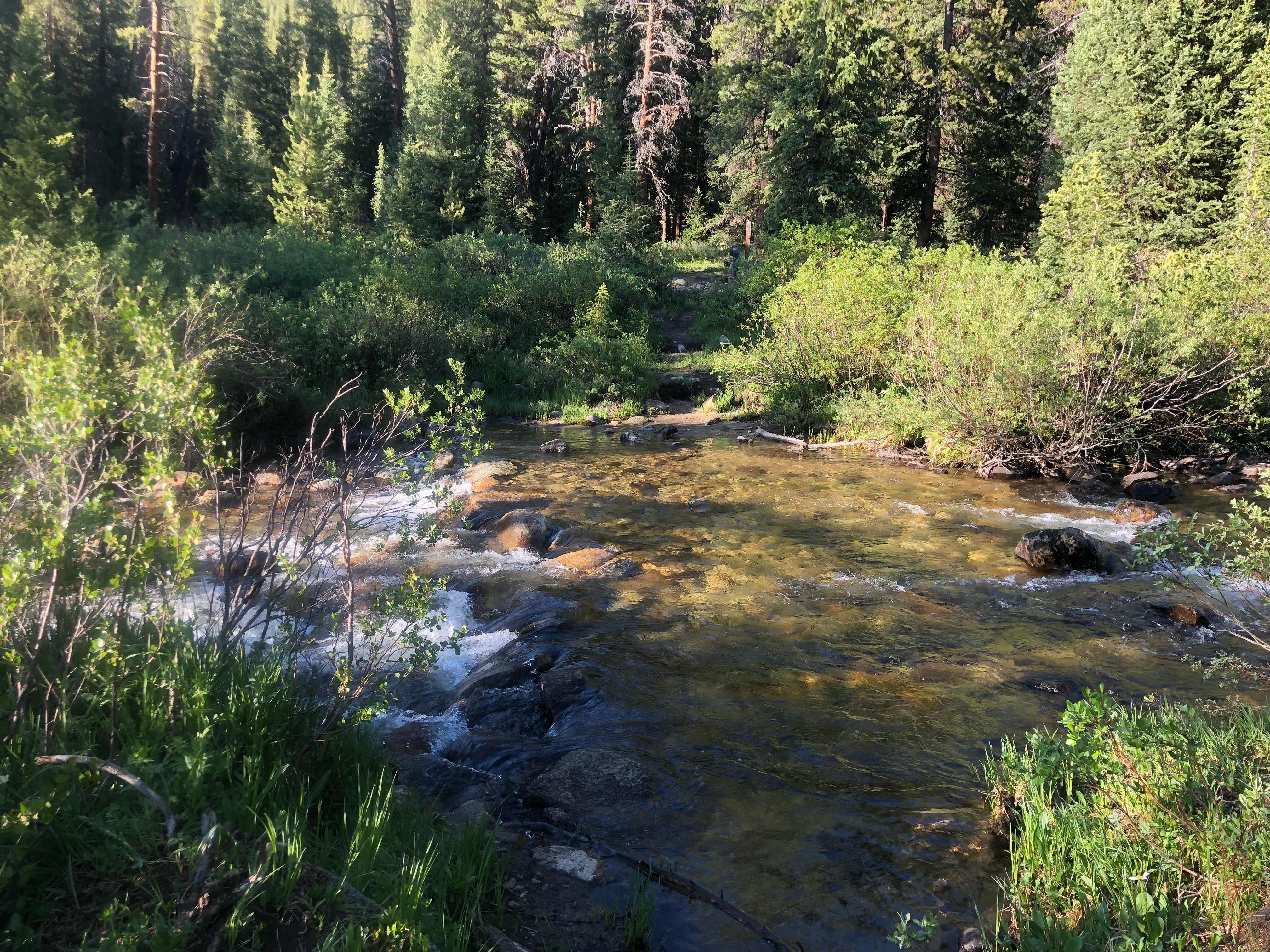 Wet crossing
There were two other crossings ahead, but I managed to find a dry way across. Once again the guys just plunged straight through. I caught up to them just as they were setting up camp. I decided to hike on a little farther. I just don’t care to camp with more than one or two people around me. For some reason I don’t sleep as well in large groups. The downside of this decision was I had to climb another steep hill. My legs were absolutely shot and it seemed to take forever. I finally found a spot to camp, although it was less than ideal because there isn’t much flat ground in the area. I was just too beat to search any longer, so I made do.
I discovered that I had passed 1,200 miles so I made a mile marker before cooking dinner. 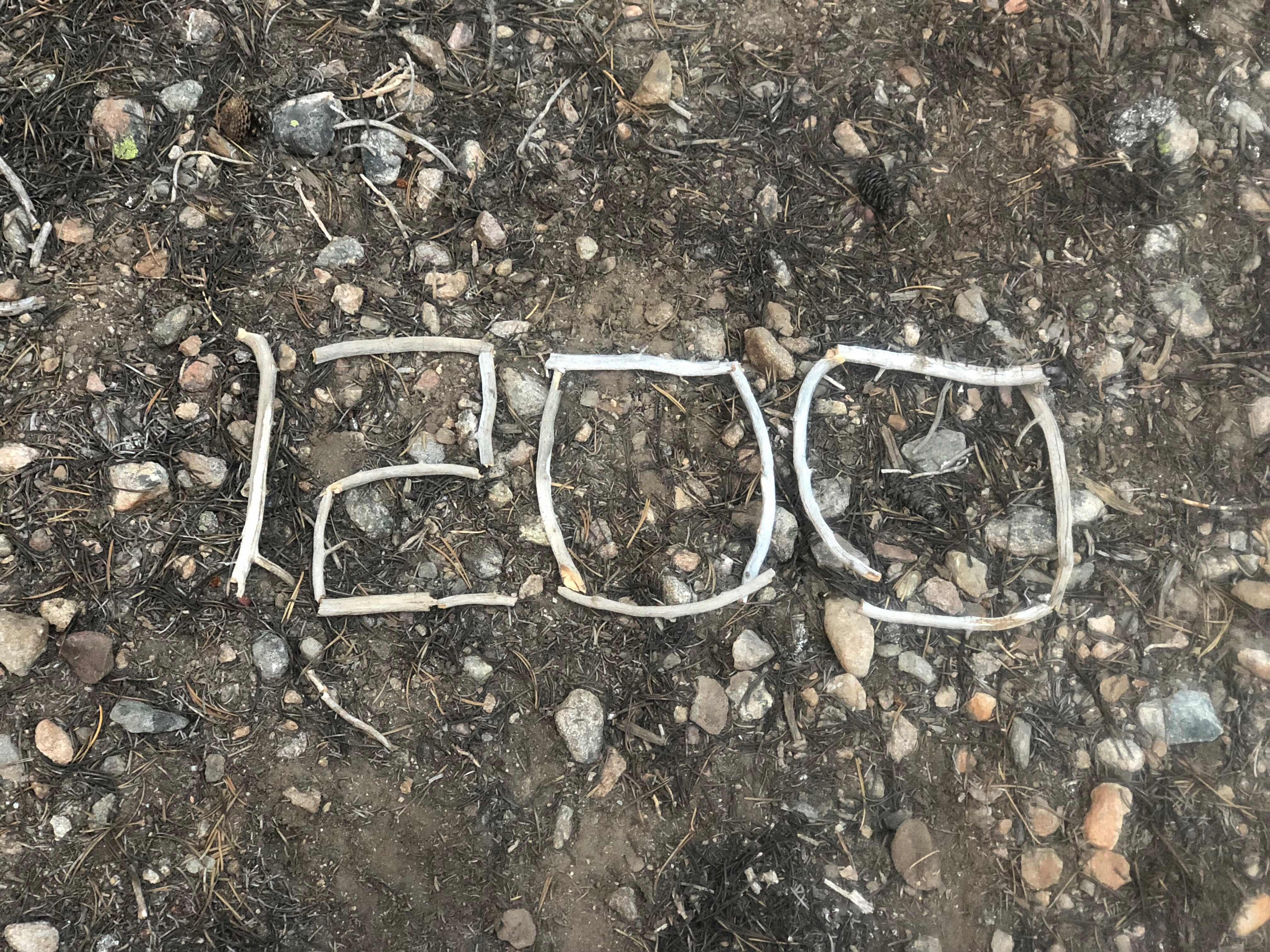 The miles are coming fast and furious now
Dinner consisted of another homemade dehydrated meal, grits, bbq chicken, onions, bell peppers, and banana peppers. Even though I slighty burnt the grits, it was still pretty good. I’m guessing that I’ll sleep well again tonight.
“Life’s ups and downs provide windows of opportunity to determine your values and goals-think of using all obstacles as stepping stones to build the life you want.”
-Marsha Sinetar