Day 17- The One Where I Stayed High

It rained off and on all night long. I pitched my tarp on a very slanted spot and I spent most of the night paying for it. I kept sliding down towards to foot end of my tarp. So far I’m not in love with this tarp. It is barely big enough for me to fit under it. As a result I worried all night long that I would get wet. The one positive thing about the tarp is that it is so light, but I don’t think I’ll use it on a thruhike again. I just barely stayed warm enough last night. If it had been a couple of degrees colder I would have been uncomfortable. I bid Flaming Hot goodbye a little before seven and hit the trail. I immediately gained a bunch of elevation. In fact I stayed above 12,000 feet all day. 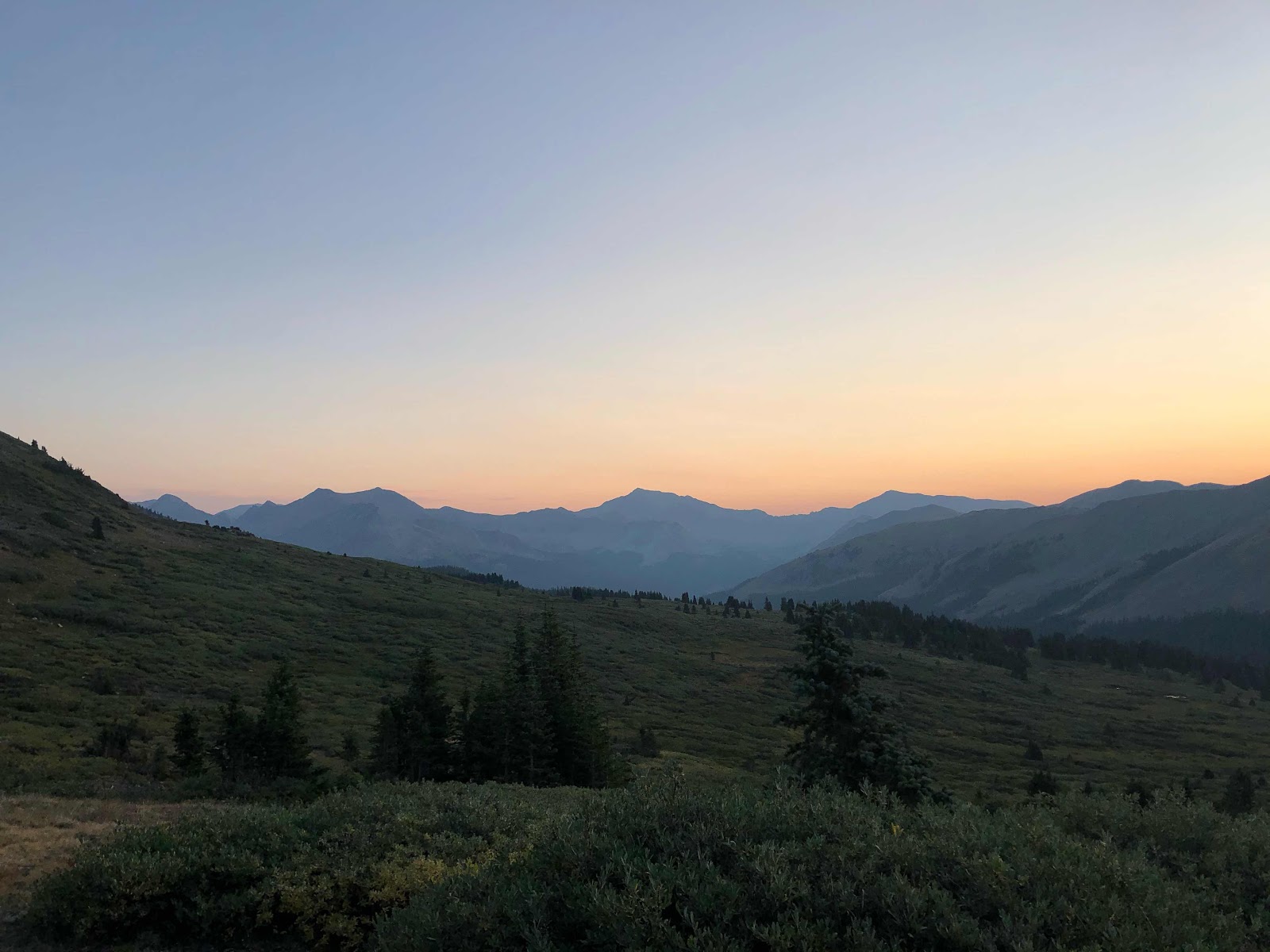 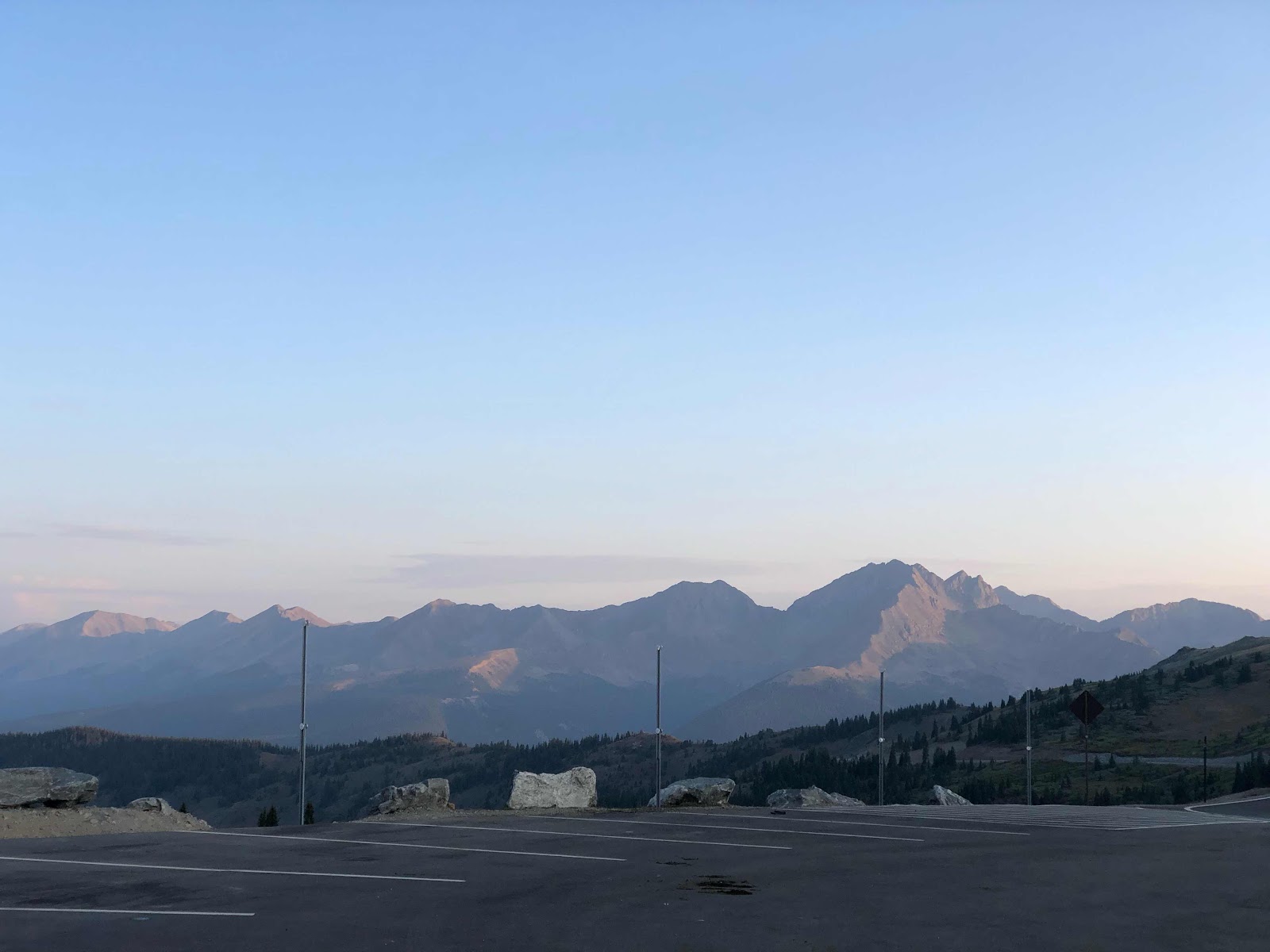 Cottonwood Pass
When I hiked through here in 2018, Cottonwood Pass was still under construction and was closed to vehicles. It was nice to see it being used this year. After crossing the road the trail climbed even higher. The little bit of rain over the last few days has really helped with the wildfire smoke. 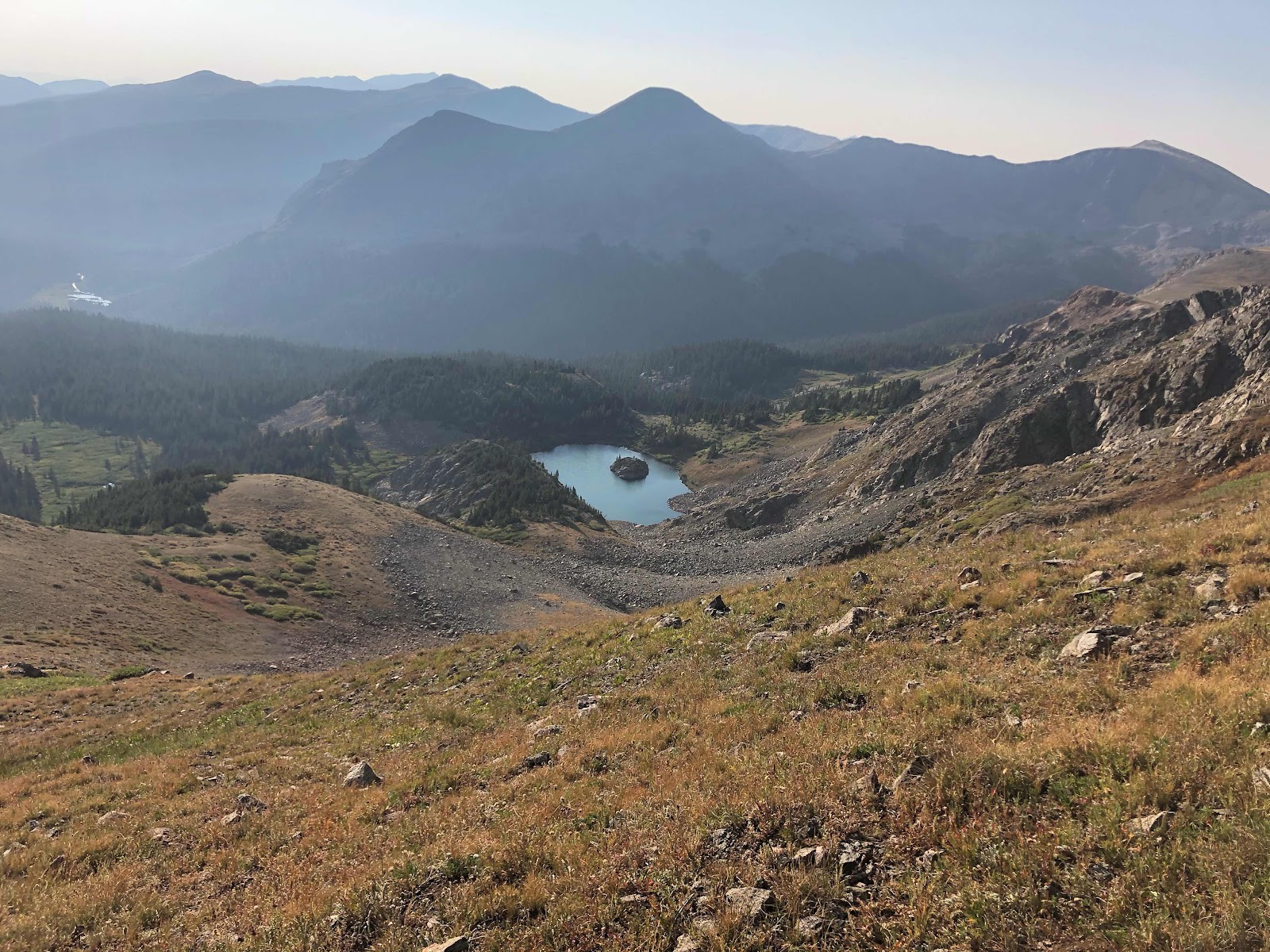 View from 12,700ft
I climbed over six passes or mountains above 12,000 feet today. After hitting the summit I would wind my way down the basin and then climb over into a different basin. I had majestic views all day long. 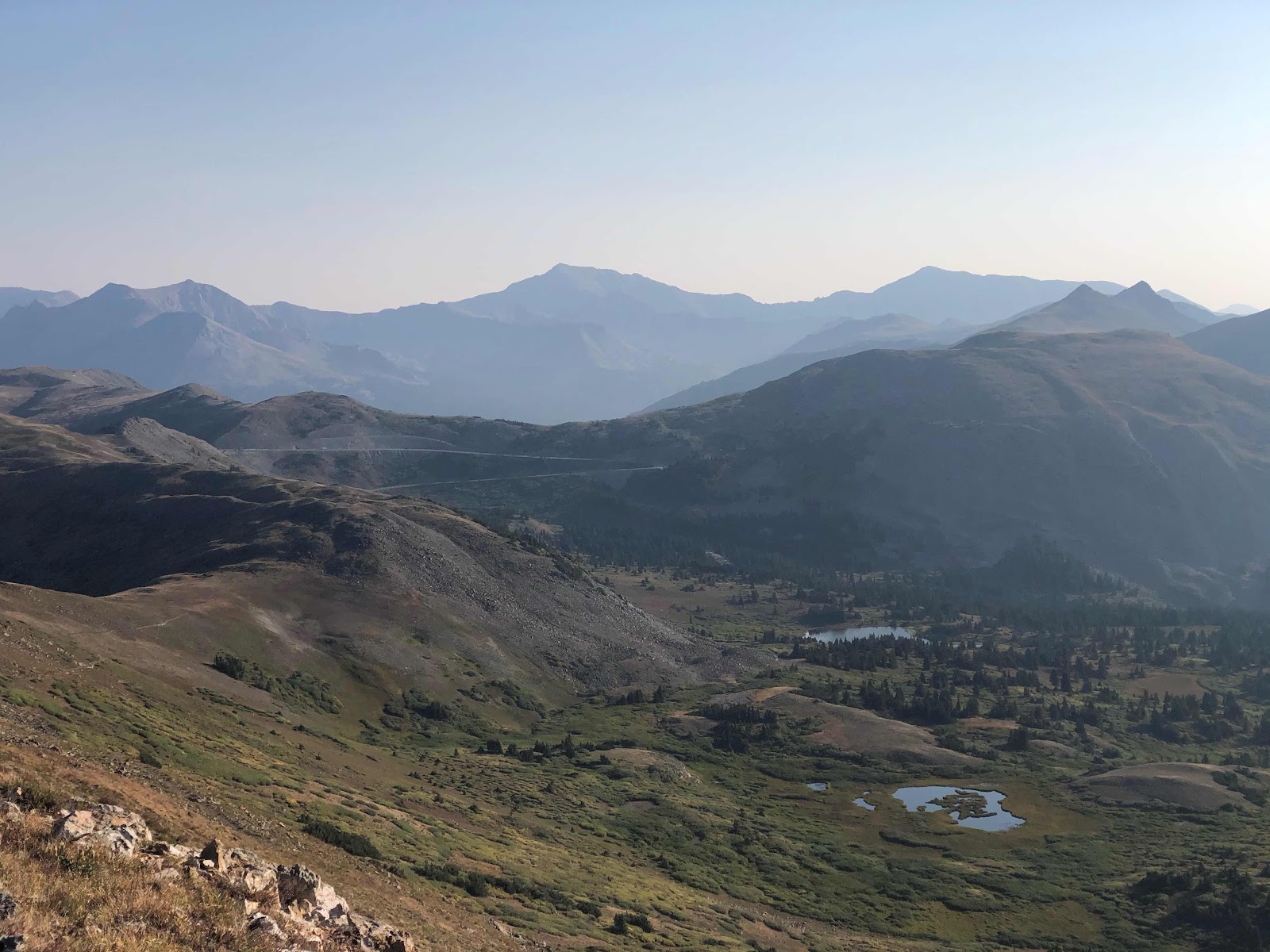 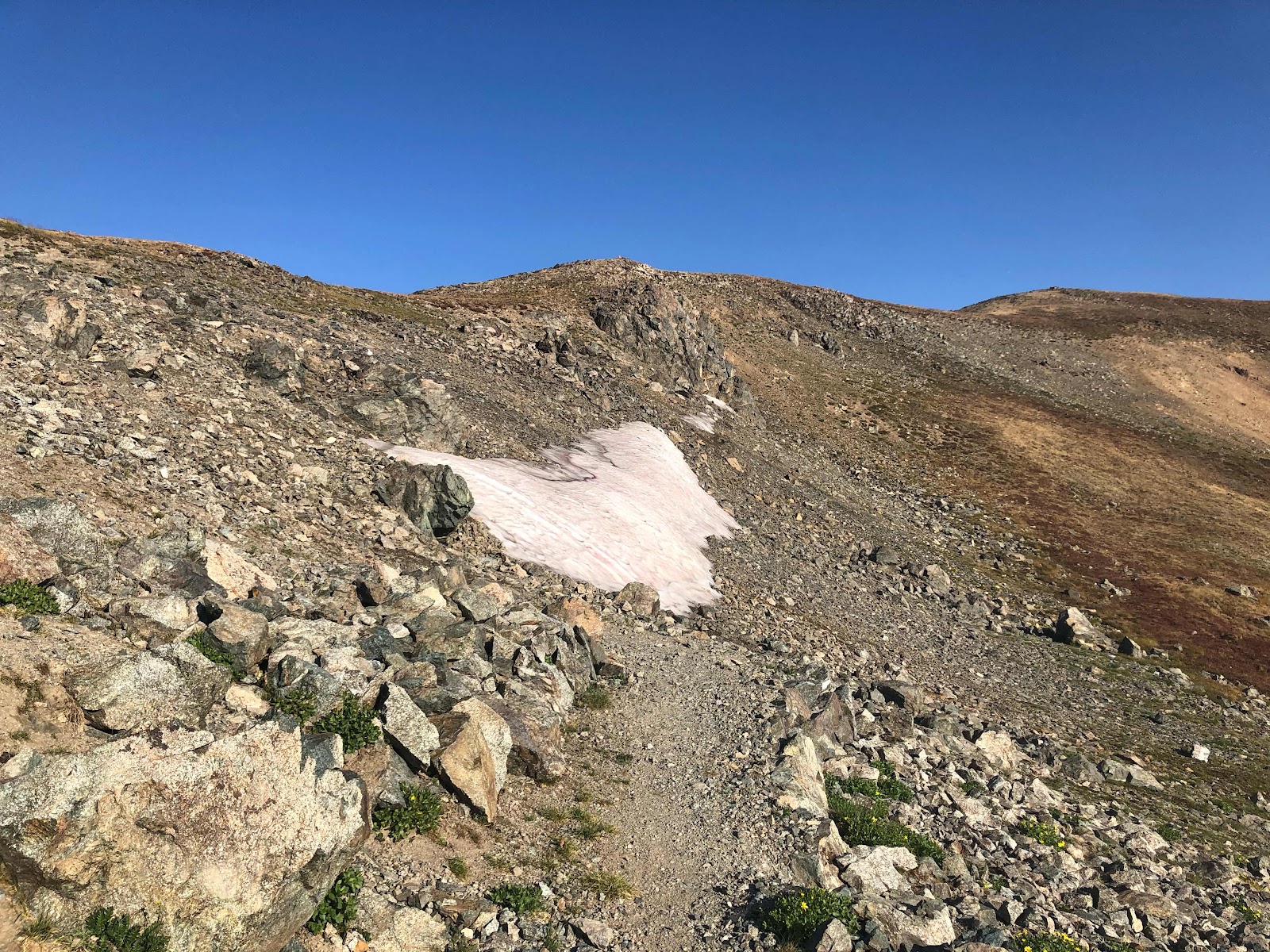 Small snowfield hanging on
I finally got a picture of a pika. They are small rodent like creatures that resemble a big hamster. The live in high elevation mountainous terrain. I usually don’t see them, but I can always hear them squeaking. 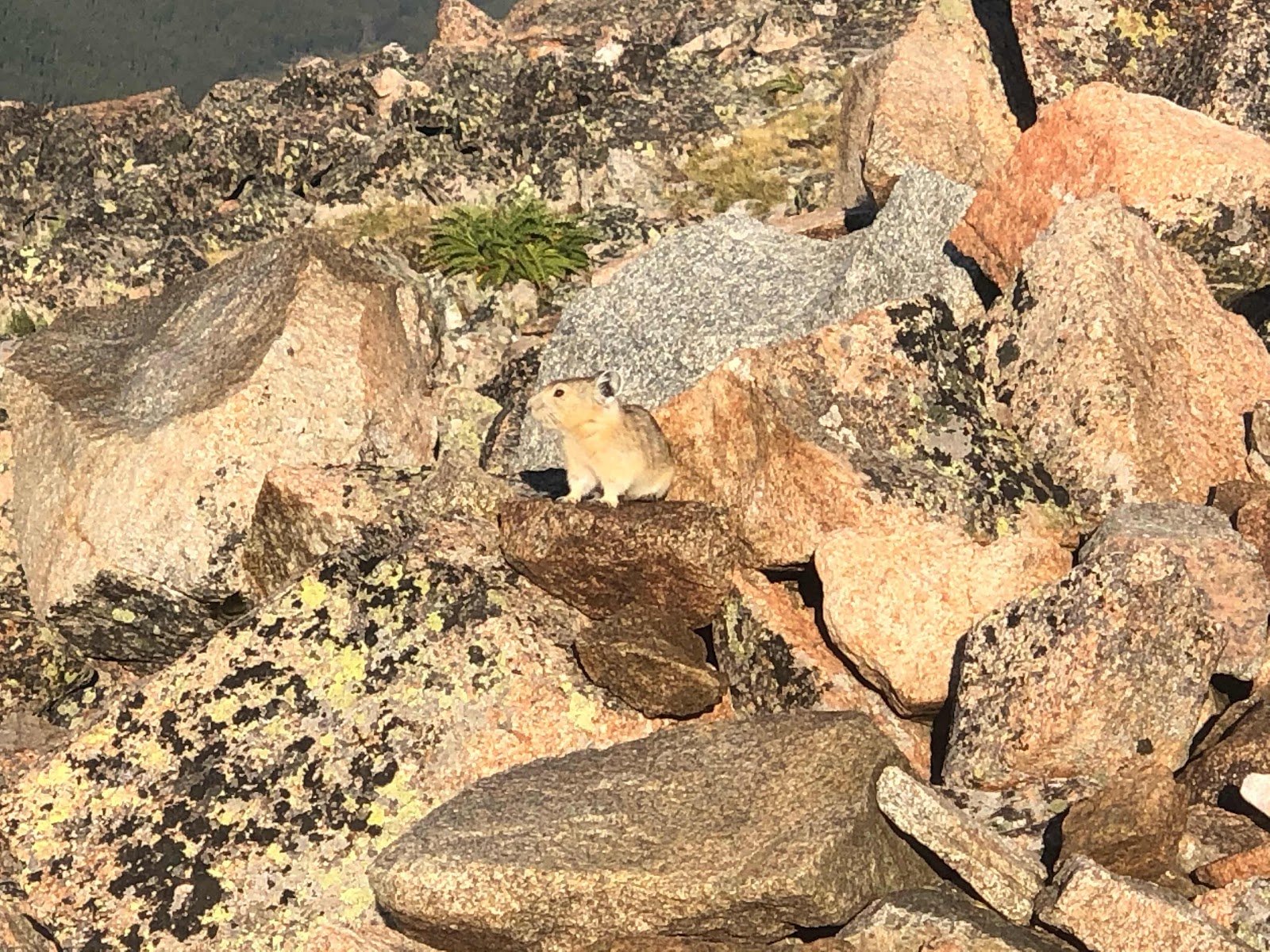 Pika!
I only had one concern today, afternoon thunderstorms. I have gotten pretty lucky with the weather so far, but of course the one day with an eighty percent chance of thunder and lightening was the day I would stay above 12,000 feet. I managed to make it over five of the six big peaks before trouble began. Coming down from peak number five it began to rain and the wind picked up. By the time I made it all the way down I started hearing the thunder. As I was taking a break to grab some water some other thruhikers caught up to me. All of us were a little concerned. I thought about waiting out the storm, but we were still at 11,000 feet and there wasn’t any tree cover. Scooter used his InReach to get a weather report and it didn’t sound great. The storms would last the rest of the afternoon. Speed and Grasshopper decided to go for it. We needed to hike up 850feet in one mile to get over the last peak, then we would finally get below tree line. I decided they were probably right and the four of us took off as fast as possible. We all managed to reach the top before the rain picked up. It was a very steep climb, but the sound of thunder was great motivation. We never did see any lightening. 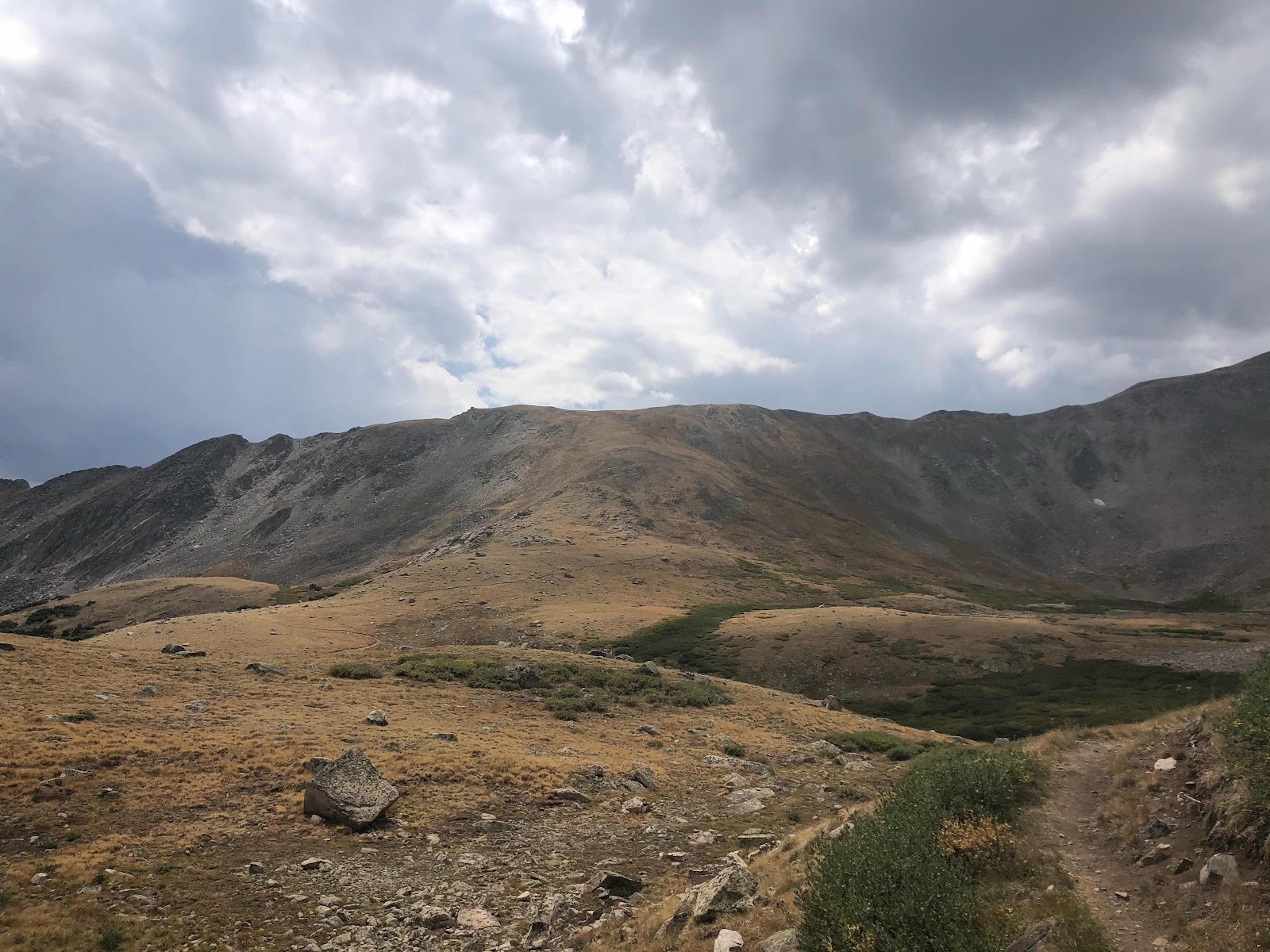 Pretty ominous
On the way down the rain really began in earnest. I stopped to put on my rain jacket and to put away my solar panel and battery park. As I was doing that it began to hail. My response was to run down the mountain. Eventually I hit a large talus field and had to slow down. I don’t like crossing talus when the rocks are dry, imagine my apprehension of crossing them in a storm. I do have to admit the trail maintenance on this talus field was impressive. For the most part the rocks were all lined up and very flat. 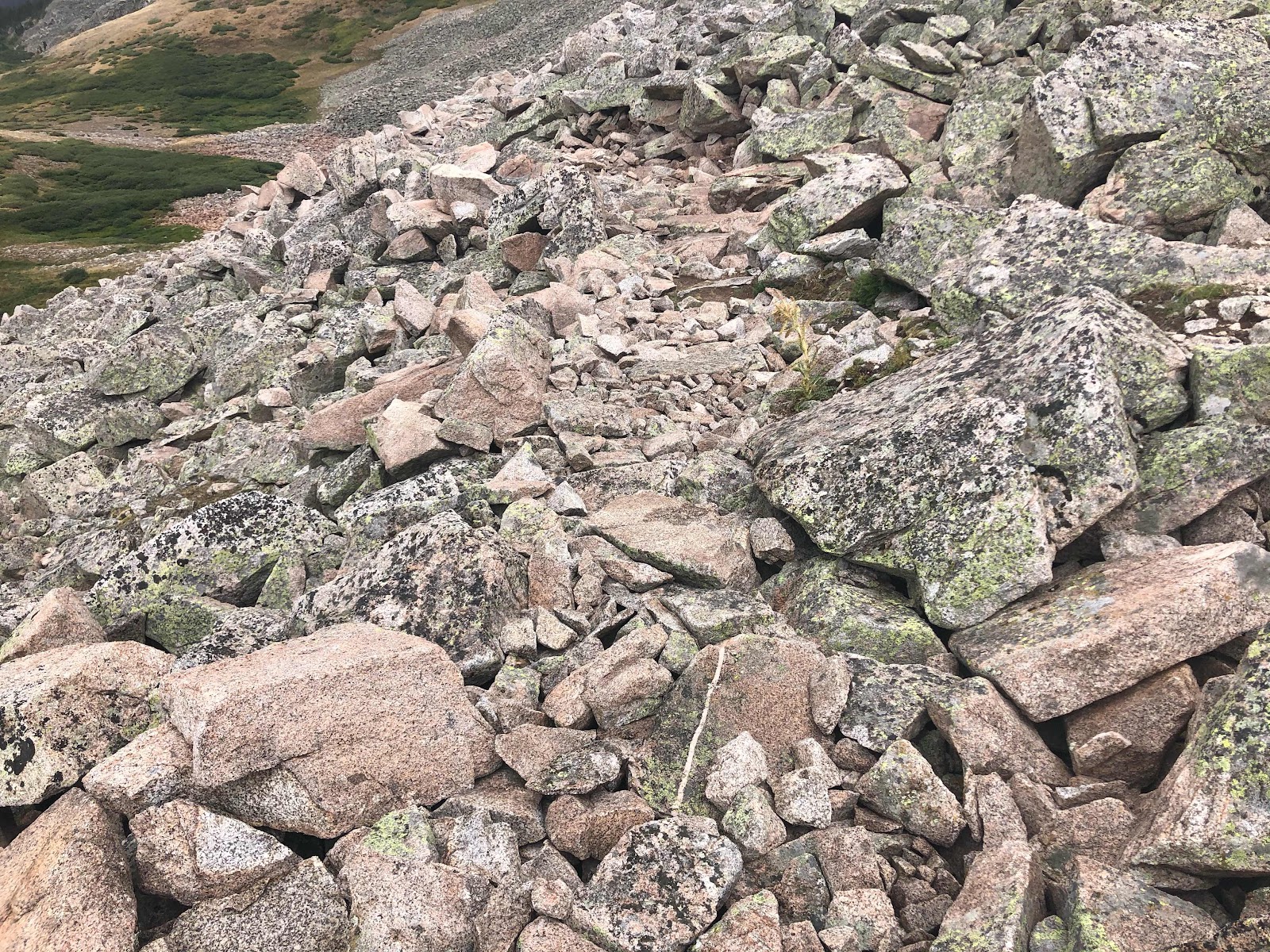 Hard to get the scope
After four long downhill miles I finally made it to the bottom and the safety of trees. It was only 3:30 and I had hiked over 16 miles of high elevation trail. I really wanted to make it another five miles, but I couldn’t decide what to do. I sat under a huge pine tree for almost an hour waiting for the storm to pass. I had 2 more passes above 12,500 feet to make it over before dark. Then I would have to find water and a place to set up camp. Only .3 miles away from my large, dry pine tree was water and a place to camp. After agonizing over the decision I finally decided to not hike over the two passes. The rain let up for about an hour and a half. I had more than enough time to set up camp, cook, eat, and cleanup. Just as I got under my tarp it started to rain again. I am pretty pleased with my decision. 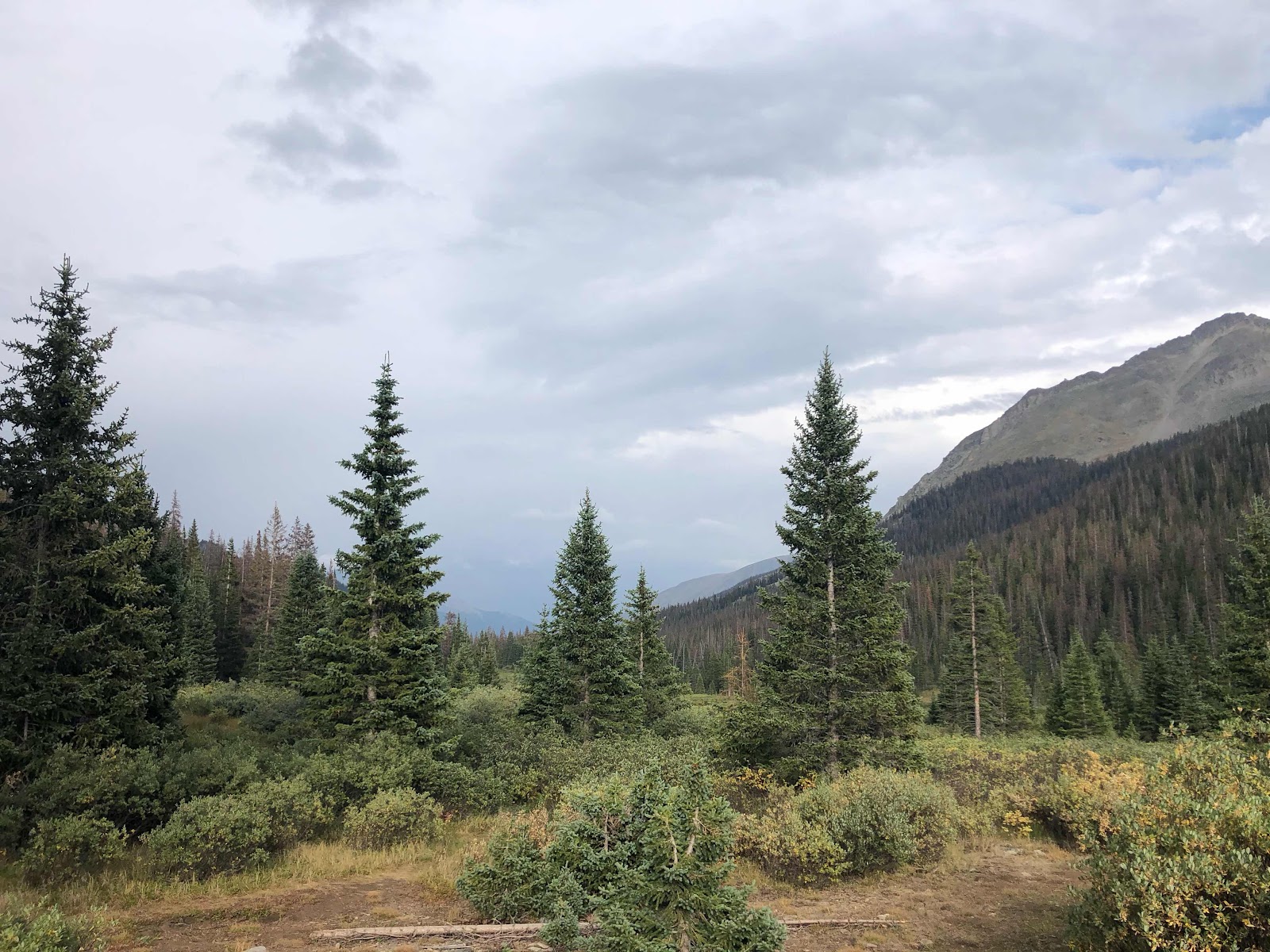 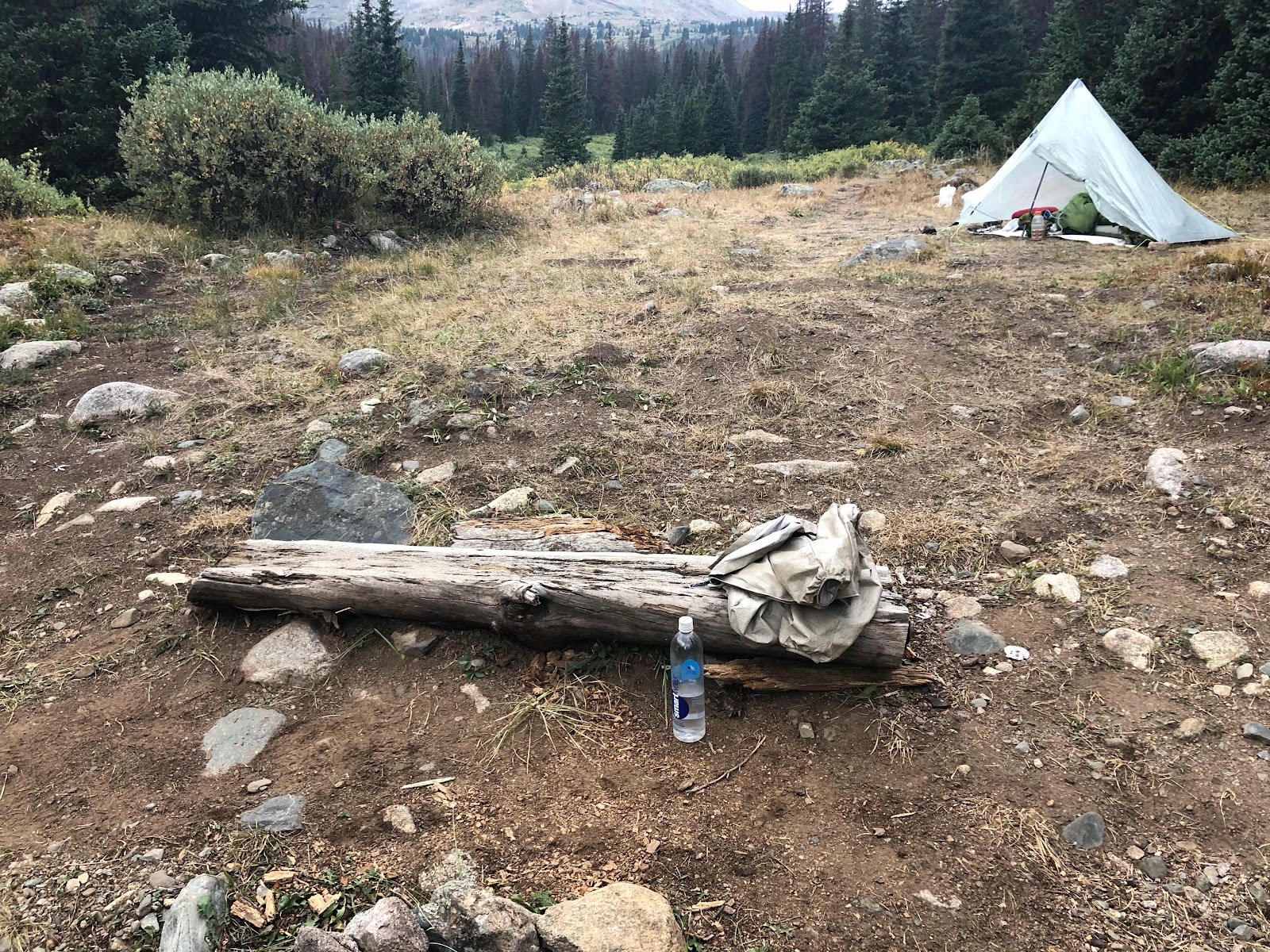 Nice bench to cook and eat at 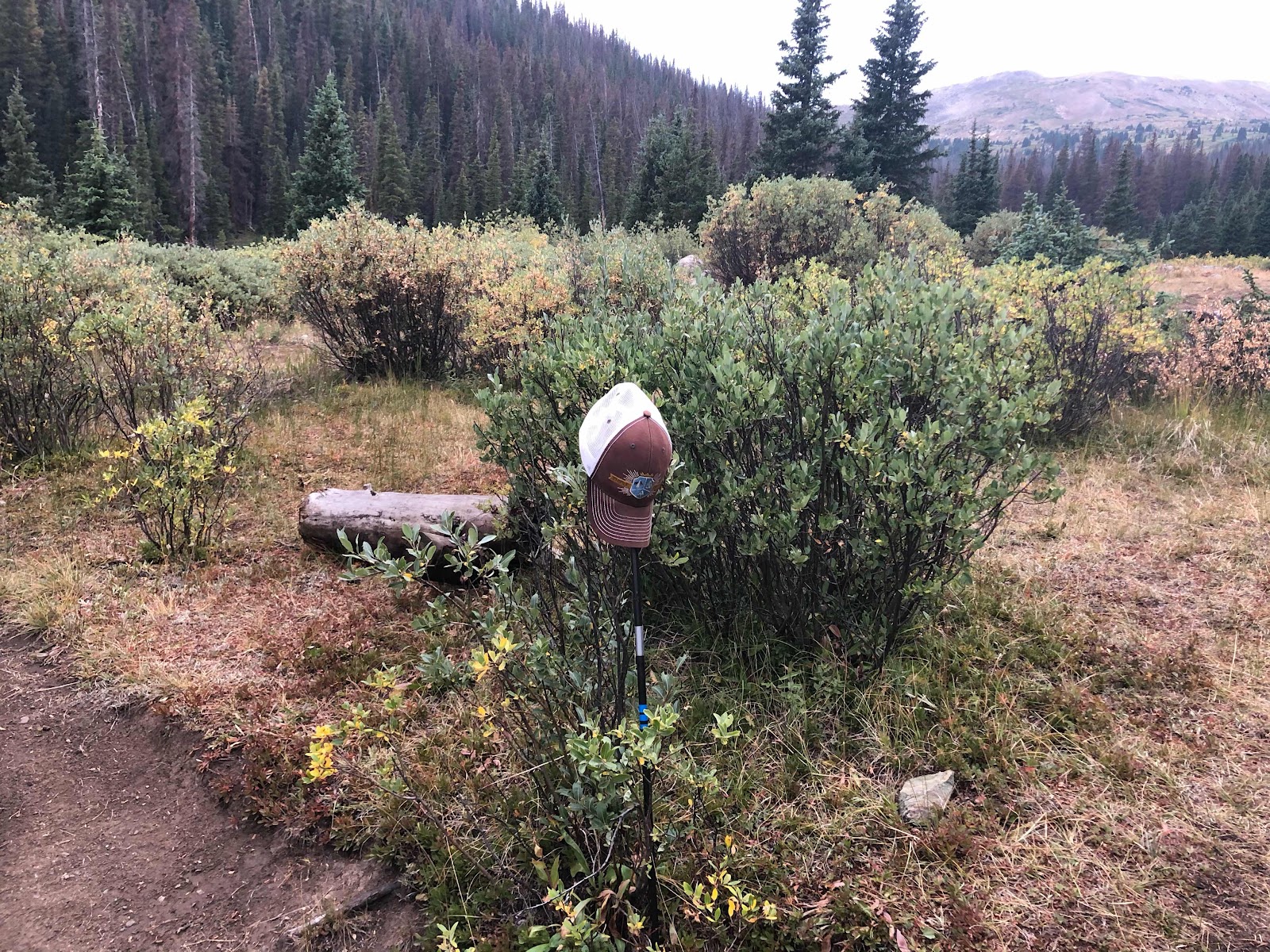 Marker left next to the trail so Flaming Hot could find me(he never did show up)
“ No difficulty can discourage, no obstacle dismay, no trouble dishearten the man who has acquired the art of being alive. Difficulties are but dares of fate, obstacles but hurdles to try his skill, troubles but bitter tonics to give him strength; and he rises higher and looms greater after each encounter with adversity.”