Day 7- The One Where I Finally Ate Some Food

I had another night filled with nocturnal creatures wanting my stuff. I guess I’m going to have to start hanging my food, which I really don’t like doing. I mean if I’m not going to hang it for a bear why should I have to hang it to keep rodents out. On top of a poor nights sleep something ate one of my straps that attaches to my hiking poles. WTH! The strap was just completely gone this morning. My guess is something took it because it was covered in sweat, thus giving them a free salt lick. Around 4:30am a moose came wandering through camp. After that I couldn’t get back to sleep. I would have to say the best part of my morning was it was fresh sock day. It’s amazing how bright your outlook on life can be when you have on a pair of freshly laundered socks. 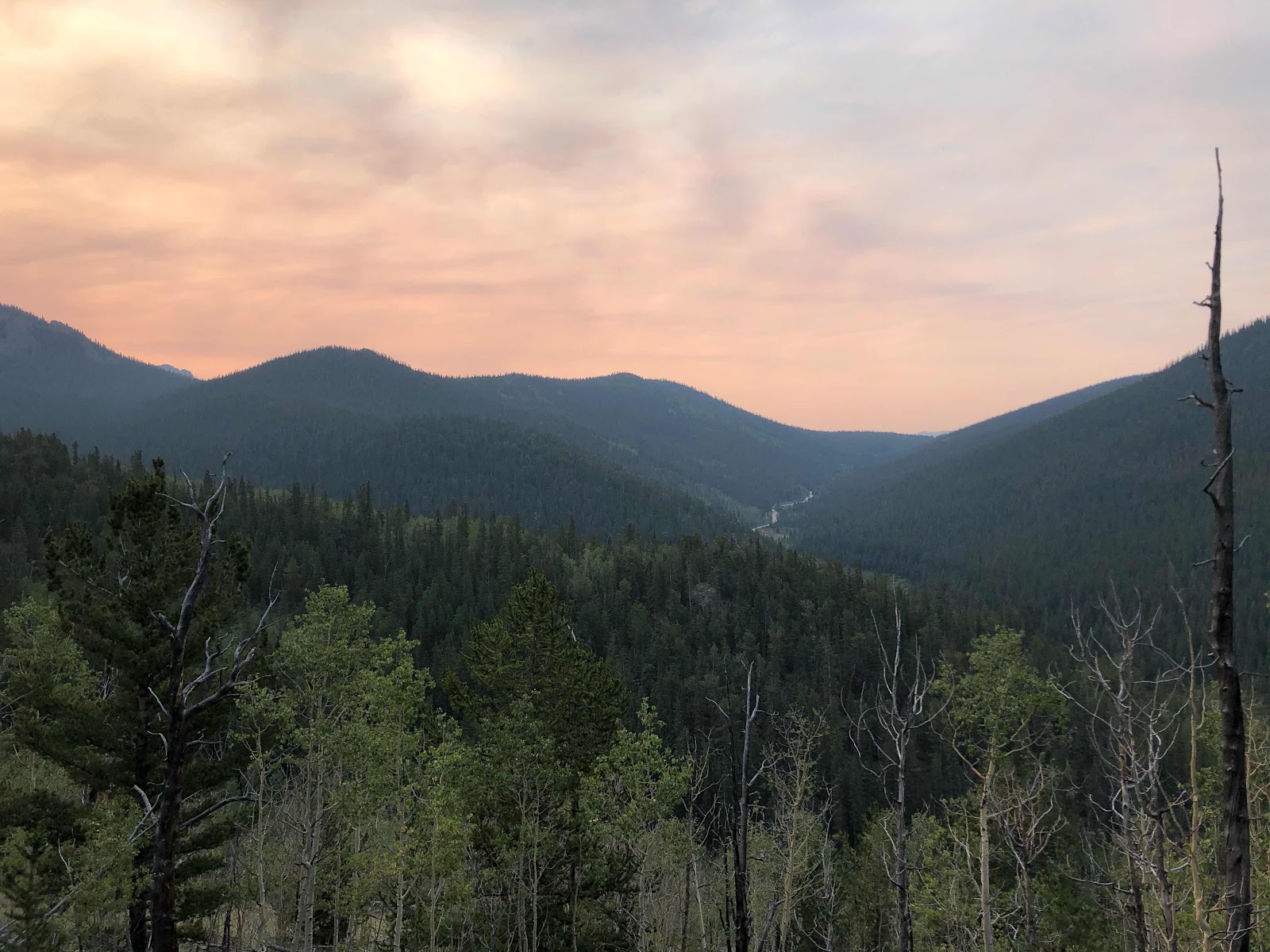 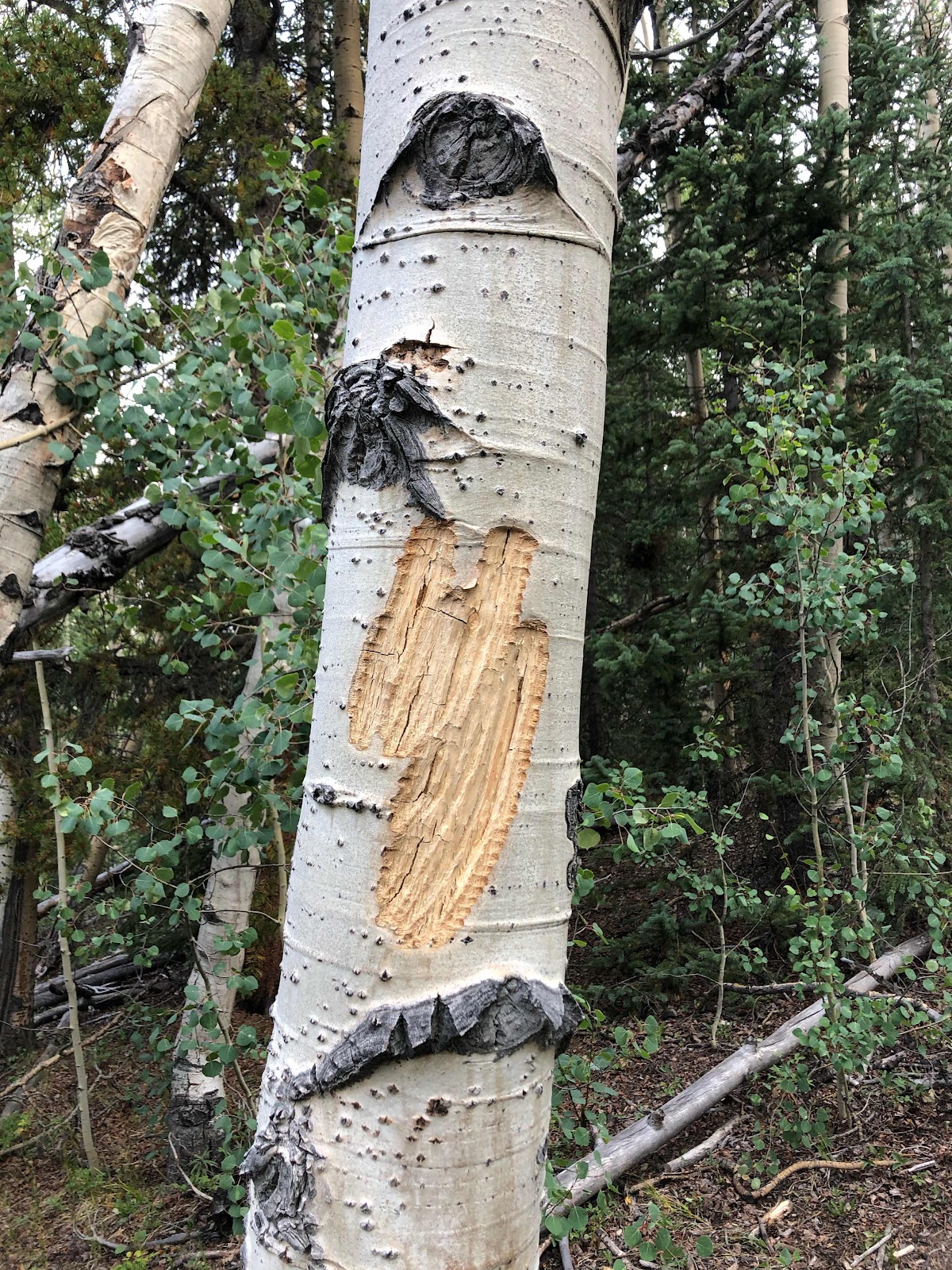 Bear scratching post
My focus for today was hiking 14.5 miles before 1pm. That would put me at Highway 285/Kenosha Pass early enough to hitch 4.5mi to Jefferson, CO. I still had plenty of trail food, but I just haven’t been hungry enough to eat it. I was hoping I could keep down some restaurant food. Plus, it has been really hot out and I wanted some kind of ice cold beverage. I’ve never seen so much traffic on Highway 285, it was like a holiday weekend at the pass. I got a hitch really fast and was in the one stop town of Jefferson by 12:30. Unfortunately, that seemed to be their lunch rush. It took me over an hour to get my food. I grabbed a Gatorade and got my electronics devices on a wall charger. I utilized their free WiFi to upload a few blog posts. I tried calling home, but the connection was horrible. I tried talking to my mom, but gave up after a few minutes. While I was waiting for lunch my bikepacker friend Jeff came in. He had just finished up the 70.1 mile detour that all bikers had to take. He biked 70.1 miles in the same time I hiked 23 miles. He had teamed up with a nice guy named Bryce and we shared a table and chatted. They will make it to Breckenridge tomorrow and I will get there sometime on Tuesday. I wanted to get in another 5 or 6 miles before dark so I left around 3:45. Jeff and Bryce would do those same miles in a fraction of the time so they got to wait until it cooled down a little.
I got a ride pack up to the pass very quickly. 2 guys from Texas were leaving the restaurant the same time as me and offered me a ride. So far hitching during a pandemic hasn’t been a problem. I asked both rides if they wanted me to wear a mask and both times I got a funny look and an answer of no. I hiked about 6 miles before making it to camp for the night. Jeff and Bryce were already there so we chatted for a little bit. The area they were set up in didn’t have any flat spots left so I went in search of a place to set up. I saw another hiker named Bob Dylan. I met him at the end of yesterday and saw him again this morning. I found a nice quiet spot about .1 miles away from everyone else. The spot they are set up in had about 7 other hikers. I found my spot by searching for a place to pee in privacy. While I was setting up a woman named Rosa came by and asked me how I liked cowboy camping. I told her it was great because you can pack up faster in the morning. I noticed her tiny pack and asked her if she was trying to set a new FKT(Fastest Known Time). She said she was planning on it, but someone today just beat the previous record by 5 days. Wow! When I first started planning this hike I toyed with the idea of going for the record. It was 15 days and 8 hrs. I thought I could do it in 14ish days, which would be an average of 34 miles per day. Rosa will now have to beat 48 miles per day. She is only planning on sleeping 3-4 hrs per night. I hope she makes it!
I should mention that today’s hiking was pretty unremarkable. The smoke from the fires is getting really bad and visibility is horrendous. I mainly spent the day going uphill a few hundred feet at a time and then going back down. For the first part of the day water was plentiful and I hiked in a forest. The second half of the day was mostly exposed with very little water. I can tell that I’m getting close to where the CDT and CT join together because I hiked through a herd of cattle and one of my water sources was a cow shit filled pond. 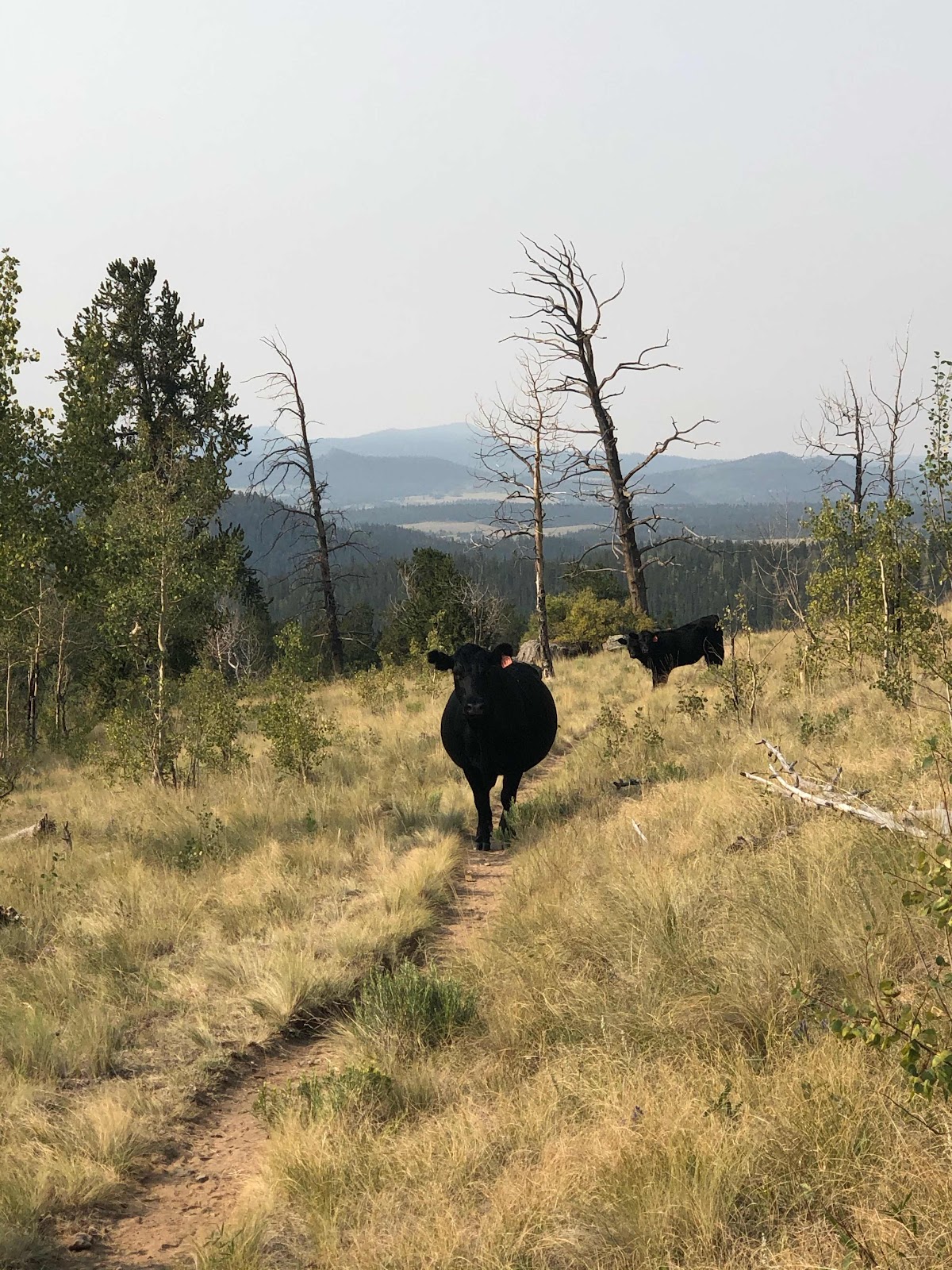 A little bit of familiarity
I’d like to report that lunch went down well. I had fries smothered with cheese and green chilis with a Philly cheesesteak. My hiker hunger hasn’t kicked in so I had an embarrassing amount of food that went into the trash. It must just be the heat and slight daily dehydration that is making it so I don’t feel like eating on trail. Things should be better after Breckenridge since the temperature will be cooler and water more plentiful. By the time I hit Breckenridge I’ll be a full two days ahead of schedule so I’m planning on taking a zero day. My body is exhausted and I could use some time to heal. 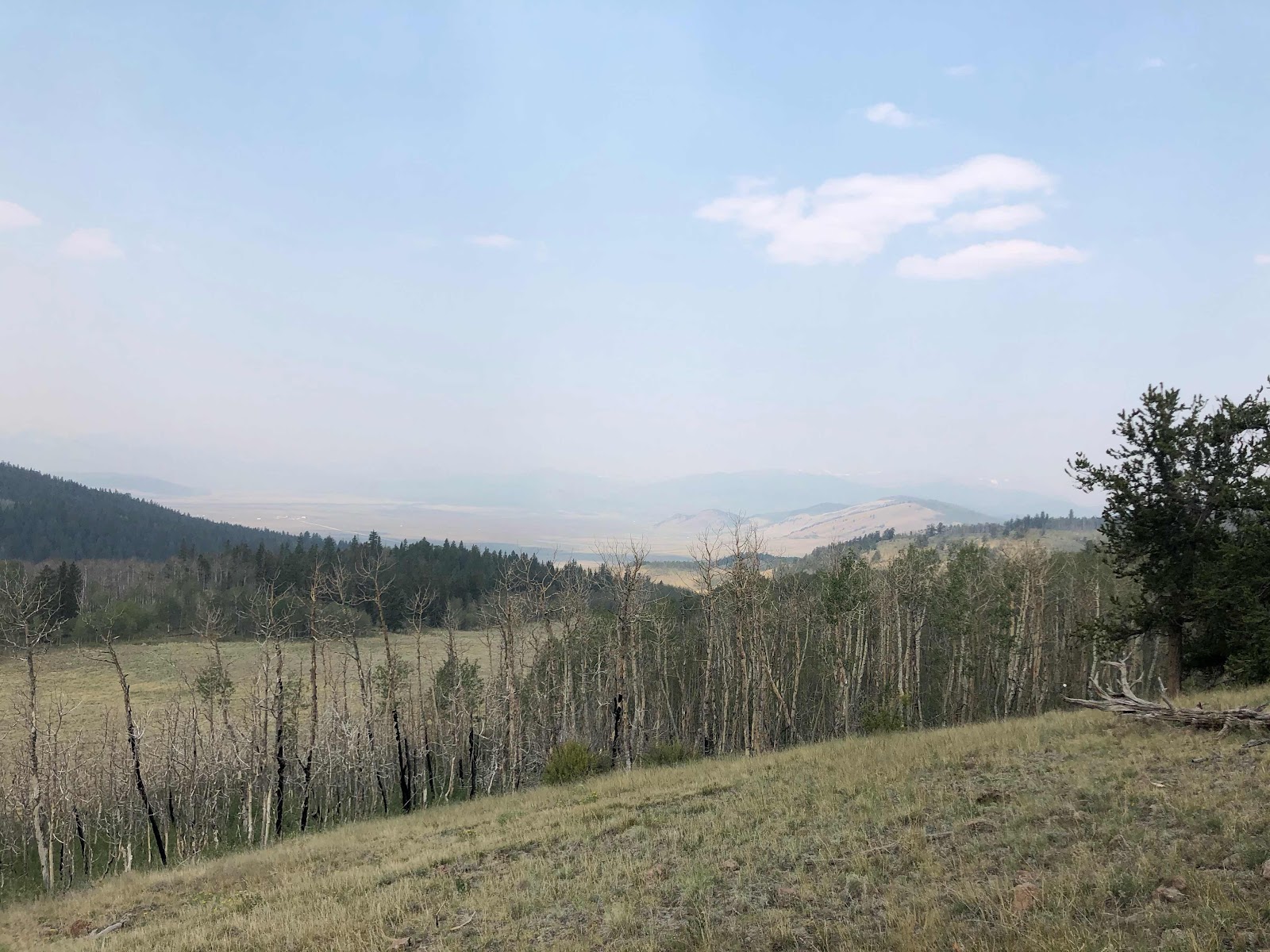 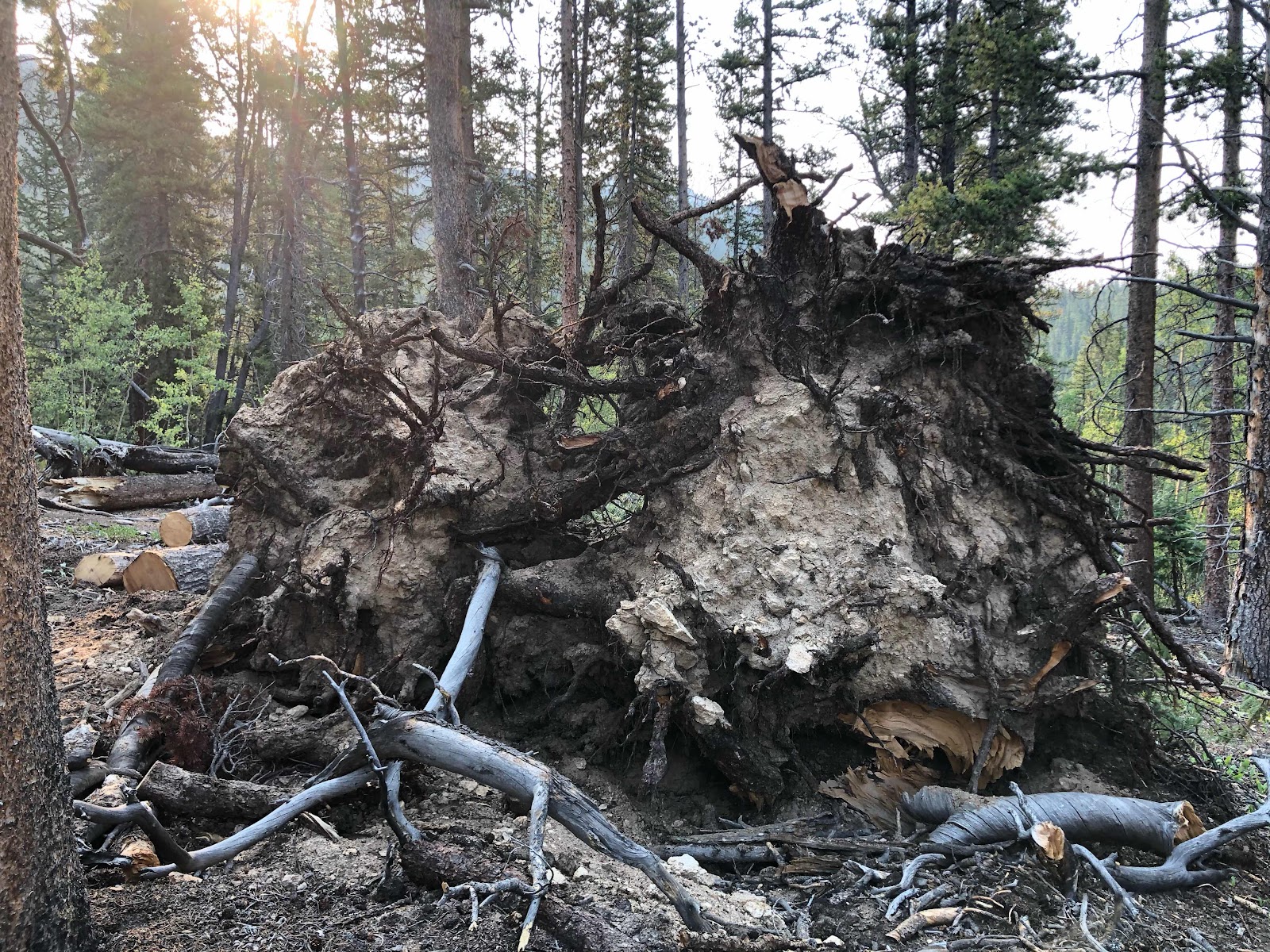