Day 2- The One With Pepé Le Pew

I feel like I had a really good nights rest last night. As soon as I set up camp I went to sleep. I’m not going to lie, it was really nice to not have to struggle to stay awake and write my blog. I decided that since this was such a short section to hike, I would wait until after I returned home and write the blog then. Due to the logistics of getting to Denver to start the trail I have almost two weeks before I will officially begin. That gives me plenty of time to organize my food resupply boxes and write a few blog posts. Before going to bed last night I made a few notes on things I wanted to mention in my blog so I wouldn’t forget.
My day started of pretty well. It was a relatively warm evening (about 50 degrees) and the morning started off warm as well. I was able to begin my day hiking without any layers on. That is a nice change of pace. I remember very few mornings along the CDT where I was able to start the day in a tshirt and shorts. For the first three or four miles of the day I hiked uphill through a nicely forested area. One of the things I love about the CT is the nicely graded uphills and the easy to follow trail. I think I hiked about fifteen miles between yesterday and today before I even saw a trail marker. They just aren’t necessary most of the time. I expected to have a difficult slog uphill, but it was graded in such a way that most of the time it was hardly noticeable that I was gaining elevation. 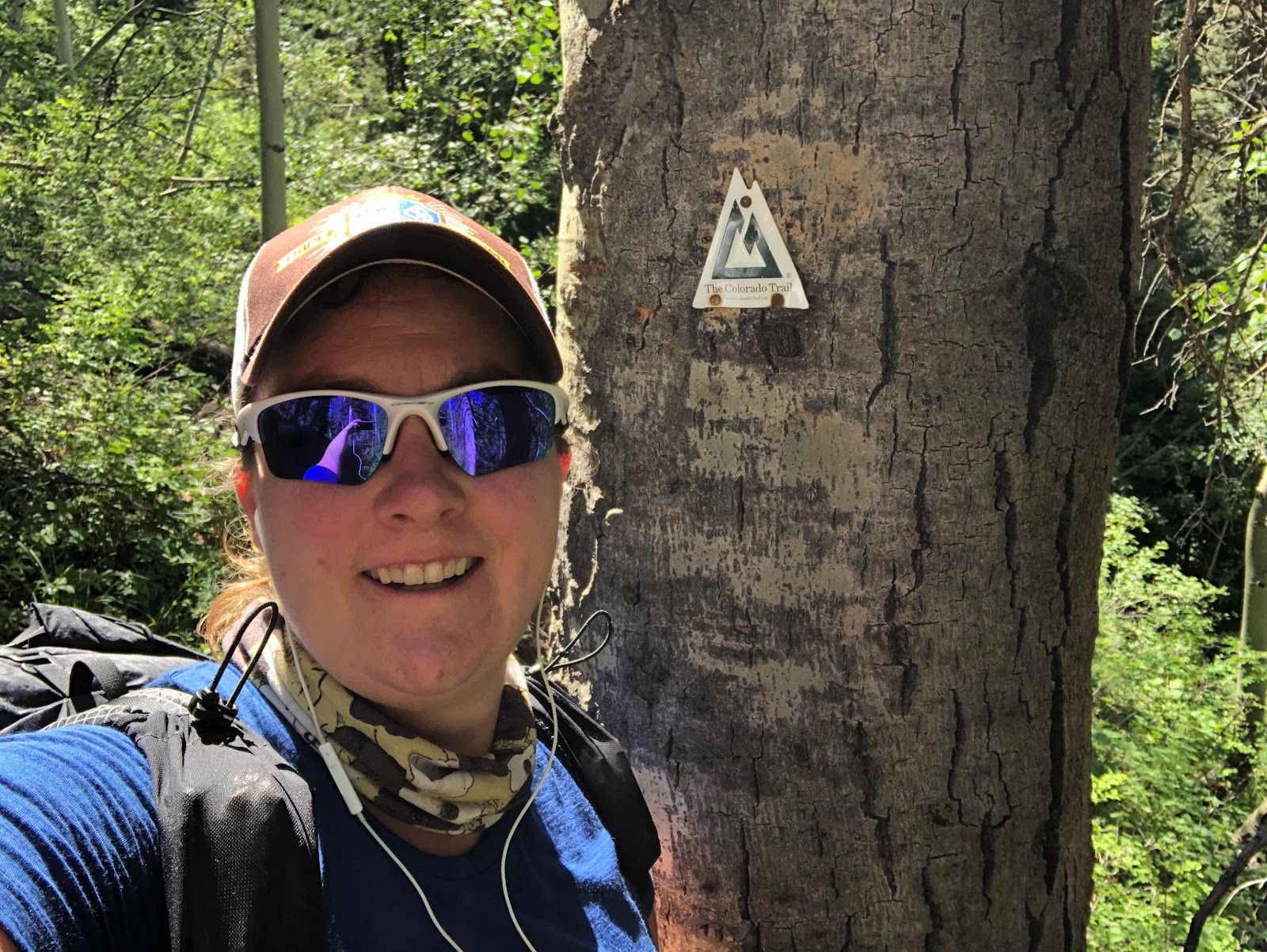 Colorado Trail Marker
After going uphill for about four miles I would spend the next five miles losing losing all of the elevation I gained yesterday and this morning. At least it was a pretty hike and I saw lots of wildflowers. As I followed the gulch downhill I was hoping to find some water, but nothing was easily accessible. I still had a tiny bit of water left from yesterday so I decided to wait until I crossed Junction Creek Bridge. I would have easy access to water there and from a picture I had seen on someone’s Instagram there was a bench there. It sounded like a good place to stop for lunch. I tried to pick up the pace a little bit because I was beginning to get pretty thirsty. I had hiked 14 miles total since yesterday and only drank about 1.5L of water. I was only 2 switchbacks away from some yummy ice cold water when I heard someone below call out to me. It took me a second to find the voice. It came from a guy on a mountain bike standing at a curve in the trail. He just kept pointing at something I wasn’t seeing. I looked all around and nothing. As I turned back to ask him, “what the hell?” I saw it. I very small skunk was between us and more importantly between me and the water. Seeing a skunk on trail is definitely a first for me. I wasn’t sure what to do. I didn’t want to scare him into the mountain biker and I didn’t want to try to scoot by and get myself sprayed. I ended up just kind of standing in the middle of the trail like an idiot. Poor Pepé Le Pew didn’t know what to do either. He would advance towards me and lift his tail, then go towards the mountain biker and lift his tail again. Finally after a long few minutes he decided to hug the rock face and let me by. I’m really glad I didn’t have to hike another 25 miles covered in skunk sauce. 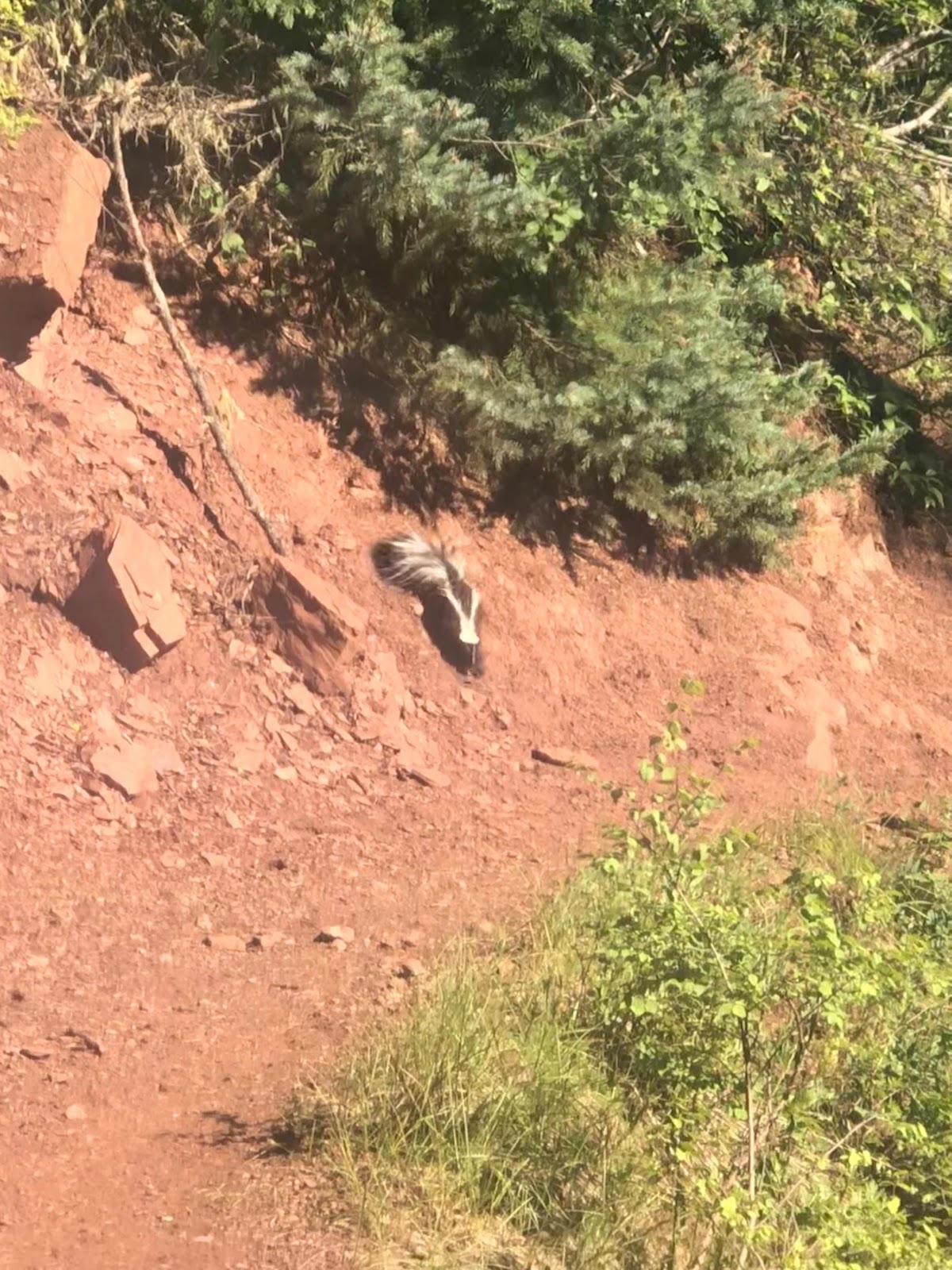 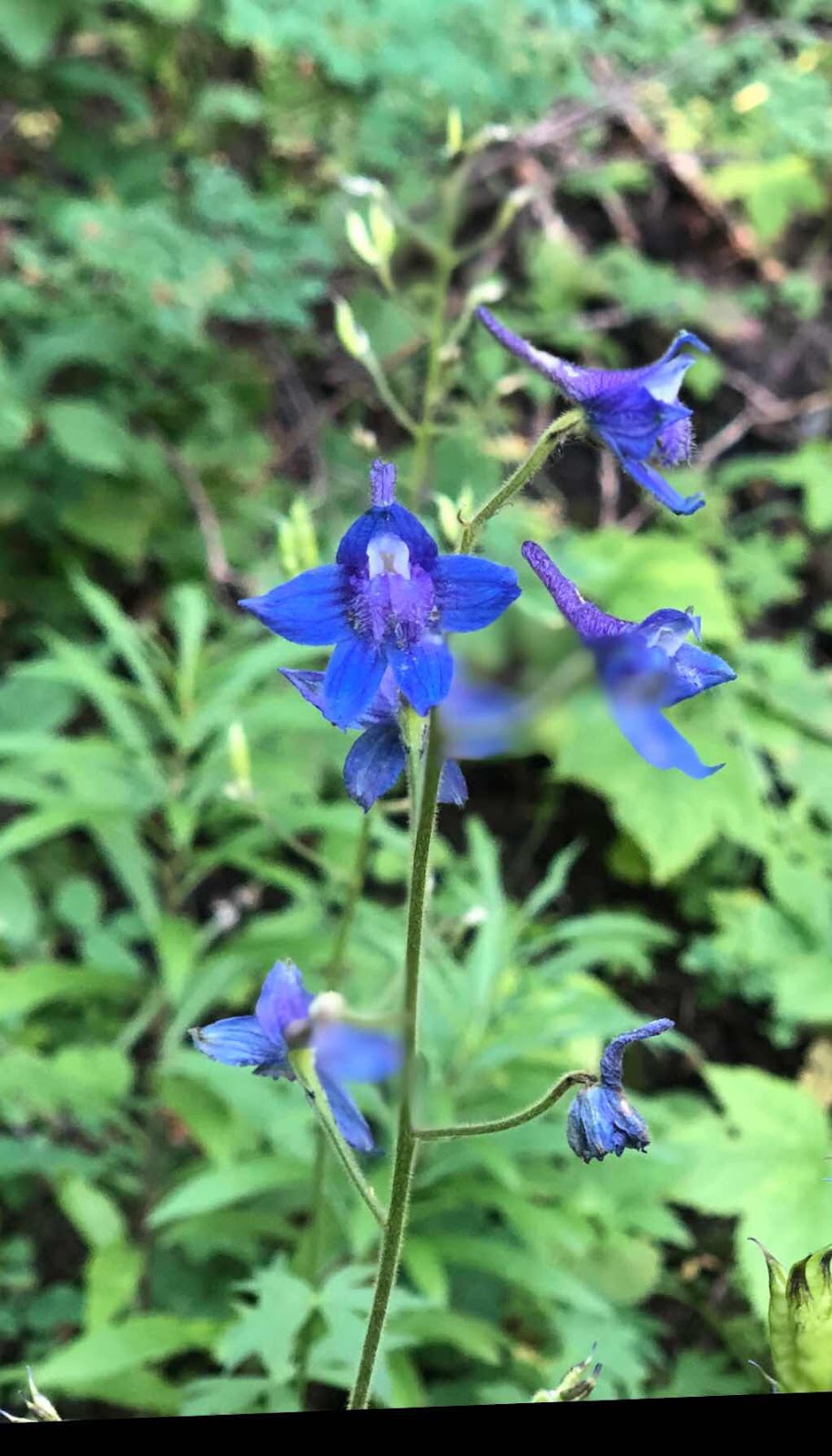 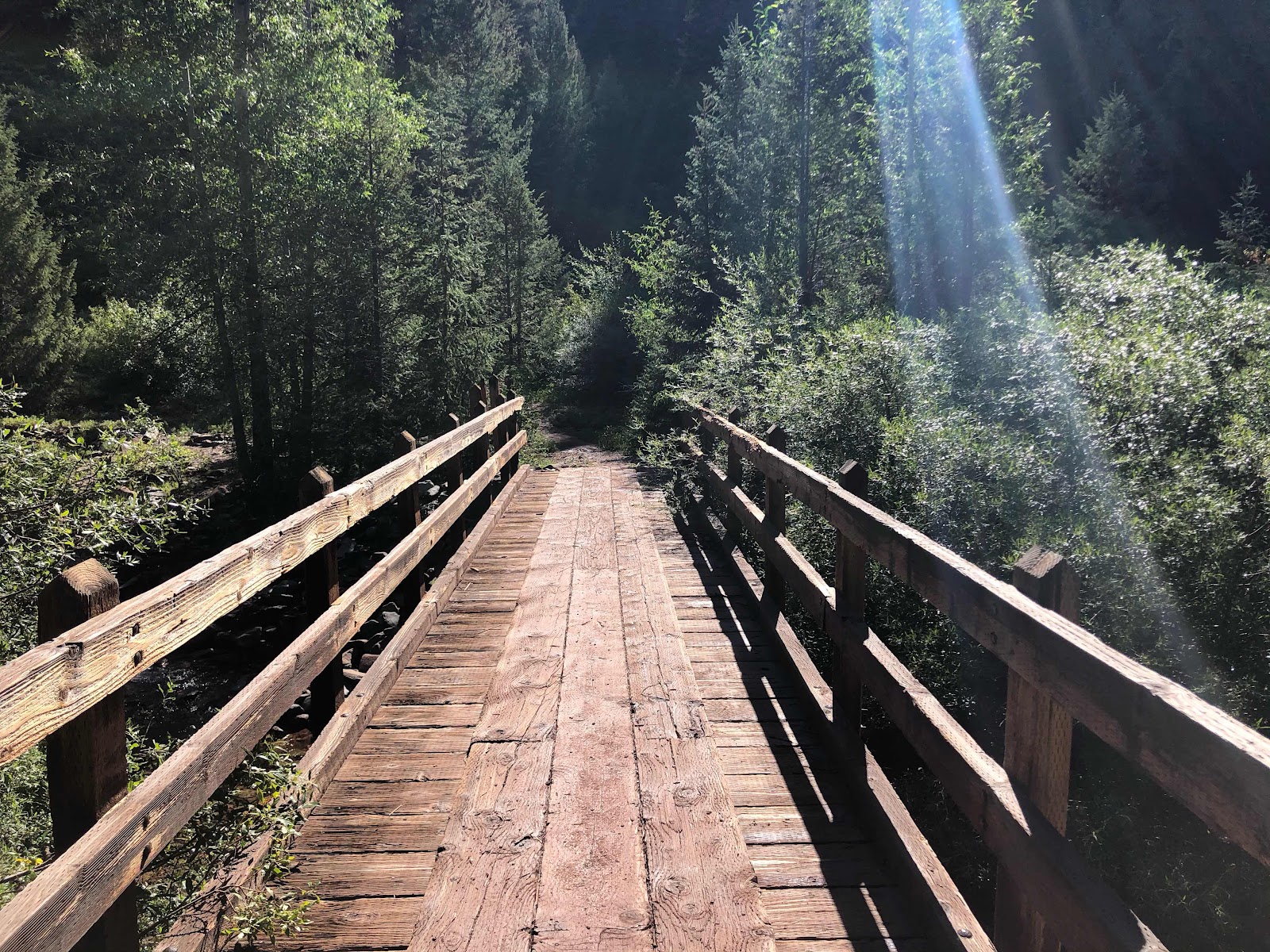 Junction Creek Bridge (I love the CT)
Shortly after crossing the bridge I processed some water and ate my “lunch”. I hesitate to say that I filter my water because that gives the impression that I use some type of water filter such as a Sawyer or MSR brand filter. Colorado has such pure water sources that I don’t feel the need to filter water. That doesn’t mean that I just drink straight from the source, I’m not an animal. I use sodium hydrochlorite, also known as bleach. Bleach kills anything that might be in the water trying to do me harm, most likely Giardia (also known as beaver fever). I’ve successfully used bleach since the PCT. I prefer it for clean water sources because it is quick and easy to use. A Sawyer filter takes about 10 minutes per liter and gets tedious after awhile. People ask me if my water tastes funny using bleach. I really don’t notice a weird taste. If you drink tap water in your home it most likely gets cleaned by using sodium hydrochlorite. If I were hiking in an area where I was sharing my water sources with cattle (I’m looking at you CDT) then I would use a Sawyer filter. They are lightweight and do a great job of turning nasty cow poop water into drinkable water.
After eating my lunch, which consisted of a granola bar and handful of Sour Patch Kidz, I spent the rest of the day hiking uphill. My minimum stopping point for the day was Taylor Lake, but I was hoping to go farther than that so I’d have an easier tomorrow. Once again, “the best laid schemes o’ mice an’ men”. The second half of my day took way longer than expected. I had dropped down to 8,500ft elevation and had to climb up to 11,600ft to get to the lake. The nice easy graded trail turned into two long steepish uphills. I had the luxury of hiking myself into shape on the PCT and CDT before hitting lots of elevation change. By choosing to hike this section of trail NoBo I inadvertently took that luxury away. As I started hiking the first section of uphill an afternoon storm began to build. I enjoyed the cloud cover because it kept the sun off of me. I was also in and out of the forest for most of the climb, which limited my views. The rain held off until just before I started the second section of uphill. Coincidentally that is around the same time I got above 10,000ft and the trail became very exposed. The icing on the cake was when the lightening began just as I got to a section of trail called “sliderock traverse”.  Picture this: I’m at 10,000ft trying to hike uphill through an old rock slide area with lightening crashing around me. I’m 14 miles into my day and utterly exhausted. I would hike about 25 yards before having to stop and take a break. Weather at high elevation definitely makes the Colorado Trail spicy. As soon as I finished the traverse the thunder and lightening moved past me and I hiked in a light drizzle for awhile. 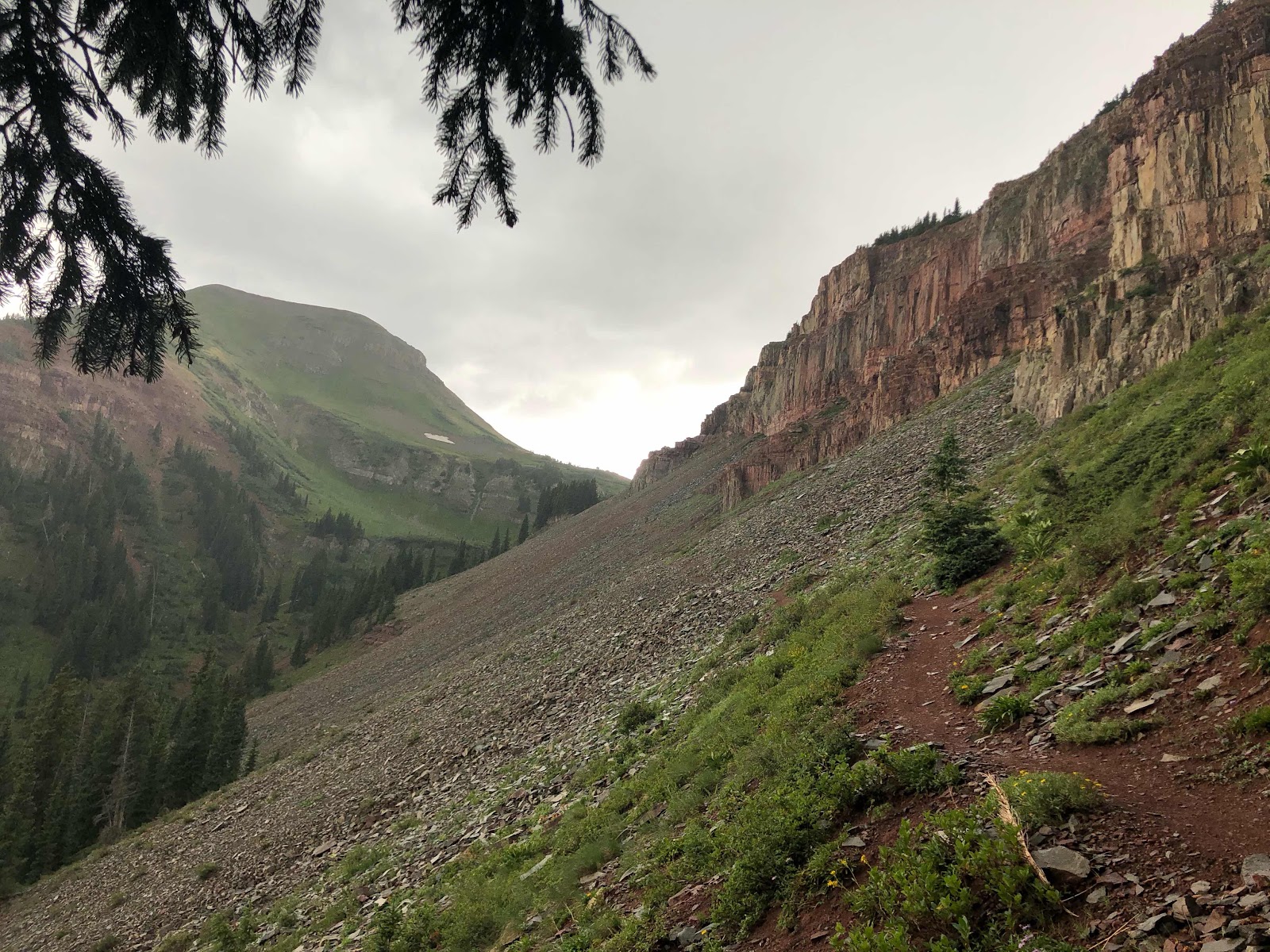 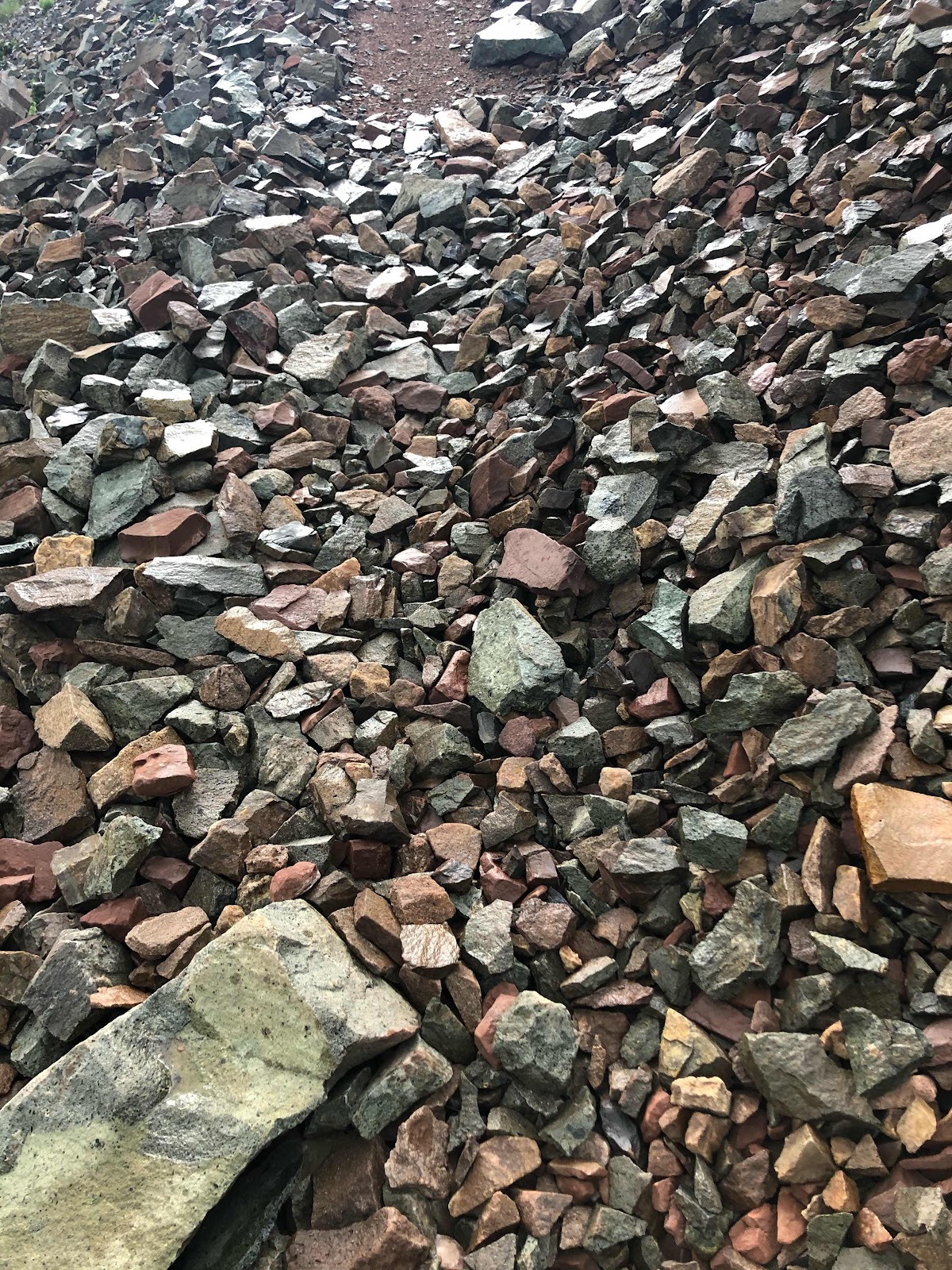 Close up of the trail over the traverse
I was definitely on the struggle bus for most of the late afternoon. The elevation change and lack of food over the course of the day had really taken it out of me. I wasn’t exactly loving the Colorado Trail so far. The terrain and views were just meh. I forgot how quickly things can change. When I got to the top of the Sliderock Traverse I stopped to catch my breath and was blown away by what I saw. I had a 360 degree views of the San Juan mountain range. The first 21 miles of trail had been fairly mundane, but now the show had finally begun. 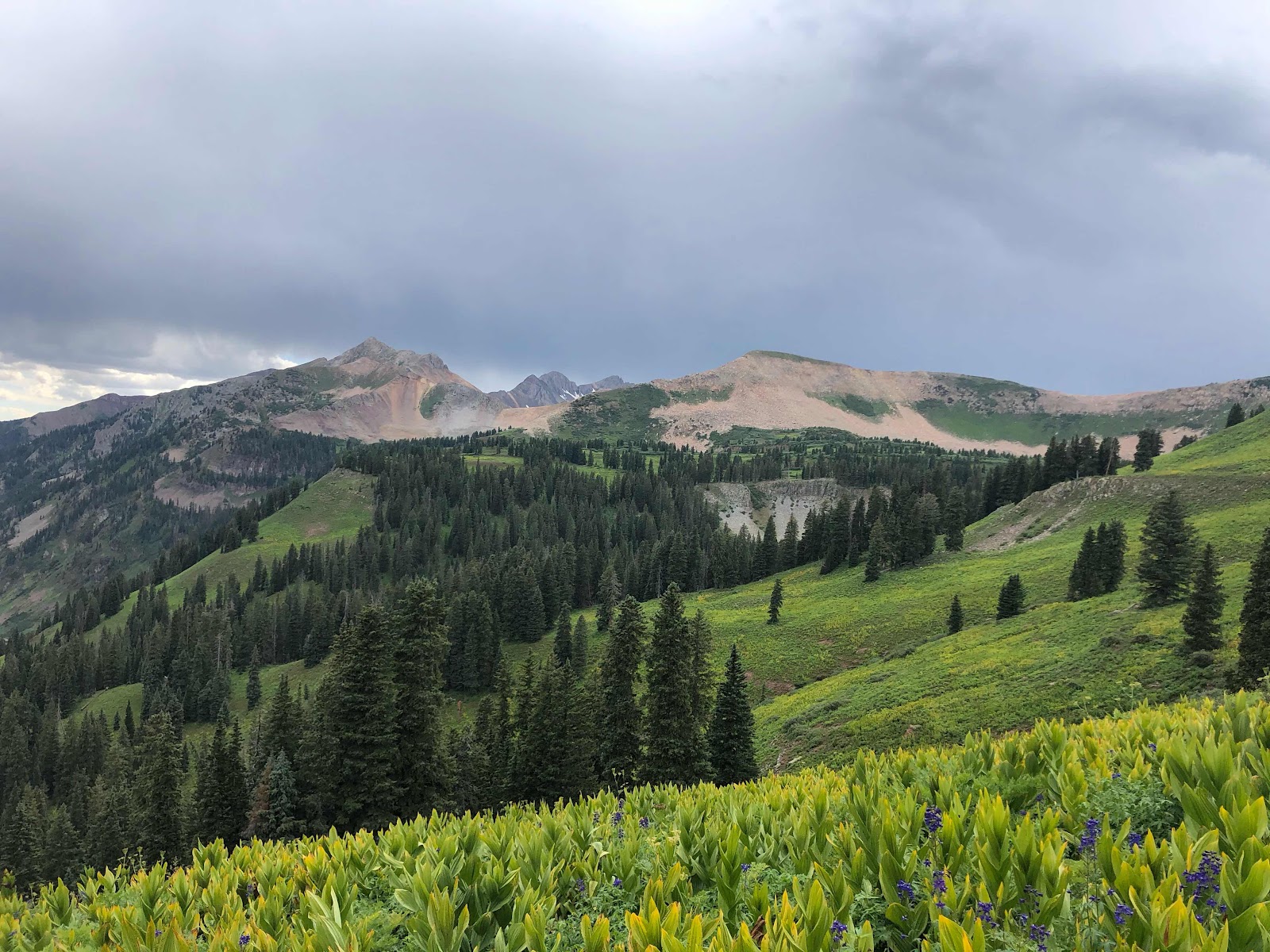 Southern San Juan Mountains
I pressed on for another mile before hitting Taylor Lake. It was still pretty early in the evening and I really wanted to get a few more miles in, but I was past exhausted. If I kept going I had another daunting climb ahead of me and no access to water or possible camp spots for 7 miles. It was an easy decision to make camp at the lake. I found a nice cozy spot and had camp set up by 6:15. I had let myself get dehydrated and felt horrible. After I set up camp I got straight into bed without bothering to cook dinner. I forced myself to sip water until I felt better. I didn’t have much of an appetite so I ate a few chips and a granola bar before falling asleep. Maybe twenty minutes later I heard something crashing through my camp and immediately came to. I had an intense staring contest with a...............deer. He was no impressed with my presence what so ever. 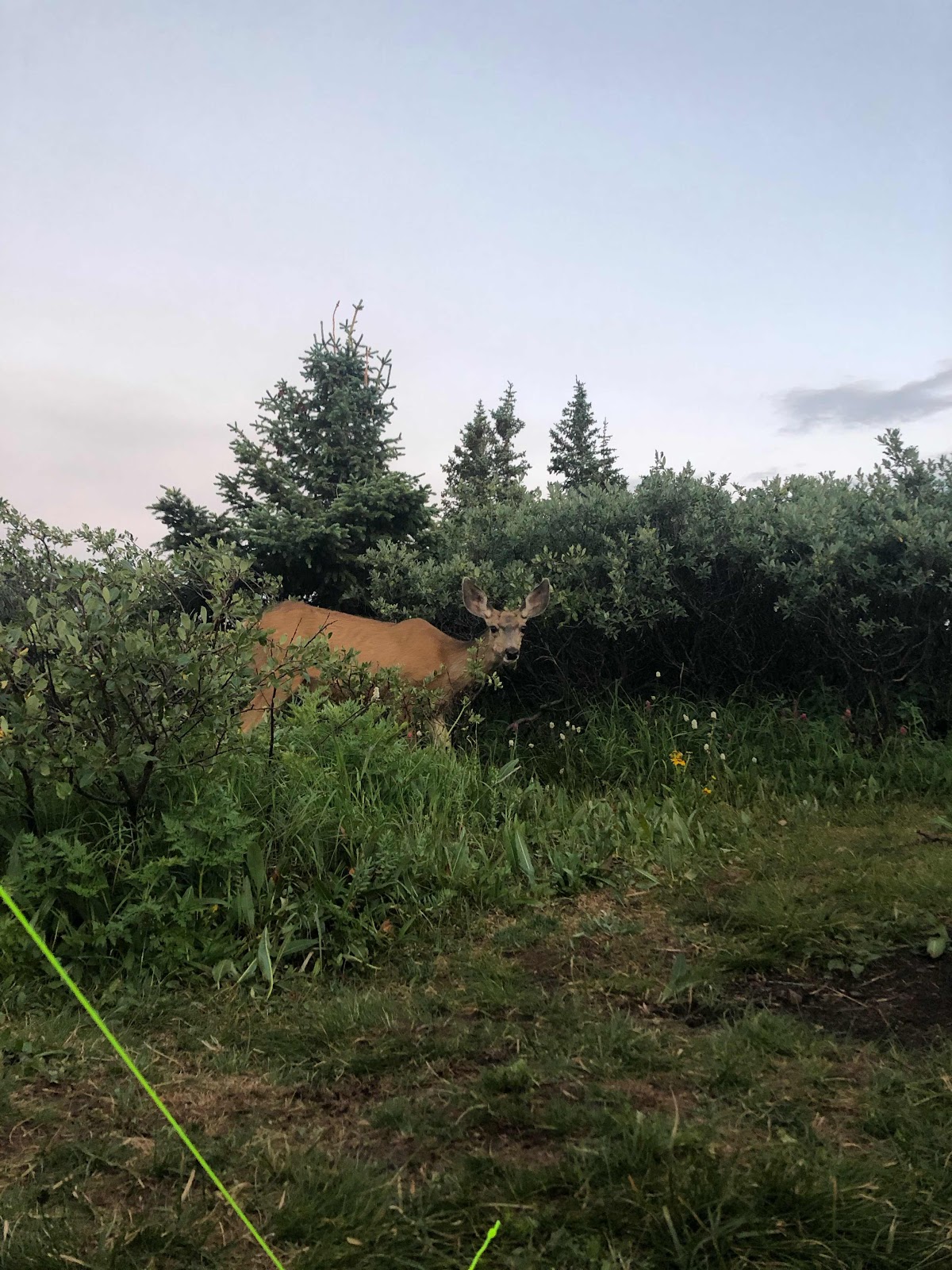 Unimpressed deer
Tomorrow will be an easier day. I hope. I learned a few valuable lesson today and saw a bunch of really cool things. My new gear has performed admirably. I have a new inflatable sleeping pad that I cut down by 6 or 8 inches. I like having a shorter pad, plus it weighs less. I cut it so it stops just below my knees. I put my empty pack at the bottom of the pad to bridge the gap and I surprised how much I like this setup. It was a very risky proposition to basically destroy a $275 sleeping pad. My friend Neemor has a hiking channel on YouTube and he posted a video on how to cut down an inflatable pad. I was pretty confident I could reseal the pad after cutting it down, but you never know until you try.

“Sometimes we make the process more complicated than we need to. We will never make a journey of a thousand miles by fretting about how long it will take or how hard it will be. We make the journey by taking each day step by step and then repeating it again and again until we reach our destination.”
-Joseph B. Wirthlin