I made a colossal mistake last night. I set up camp close to water, in a valley, in grass. The result was I had major condensation. Everything was wet this morning. I knew I would have to take a long break at some point so I could set out all of my gear in the sun to dry. Even though everything was wet I managed to stay warm. I even shed some layers during the night. I was a little slow breaking camp because I’m not used to dealing with soaking wet gear. It was a beautiful morning as I climbed up my first mountain of the day. The trail was very well graded and the climb wasn’t as steep as the elevation profile showed. That was a nice surprise for a change. My legs were worn out from the big climbs yesterday. 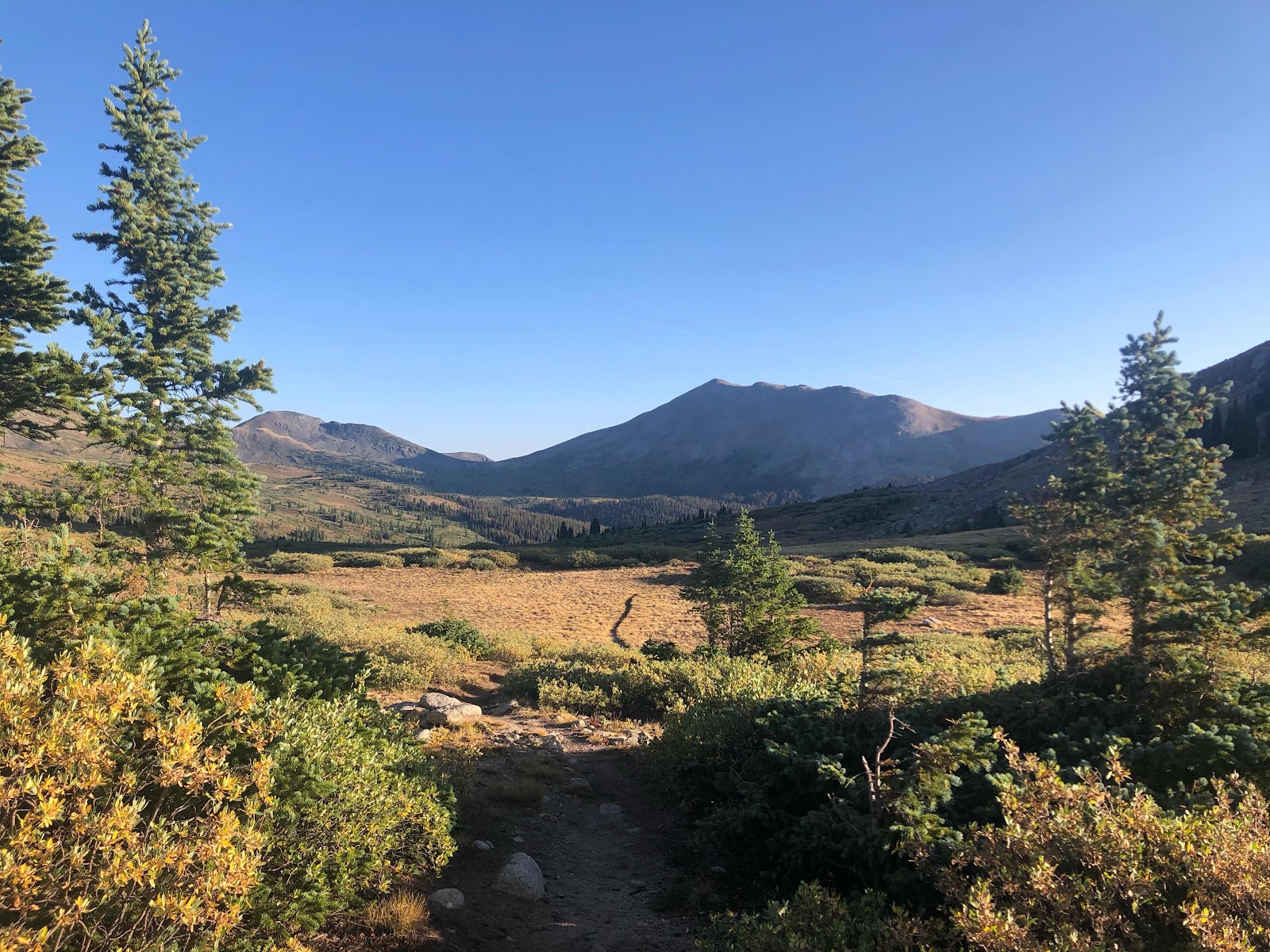 First big mountain of the day
I managed to eat a big dinner last night. I think that was the first time all trail I managed to get the proper of calories. I’m not sure why I have struggled with nutrition on this trail. It has never been a problem for me before. My goal was to eat all of my snacks I had laid out for the day. I have only been eating about half of my food daily. I had plenty of water sources today, but a lot of them were lakes or ponds. I really don’t like drinking from those types of sources unless o don’t have a choice. I decided to skip most of those and carry extra water from the streams I passed. My pack is light enough that o don’t mind carrying an extra liter if it means I don’t have to drink from a pond. 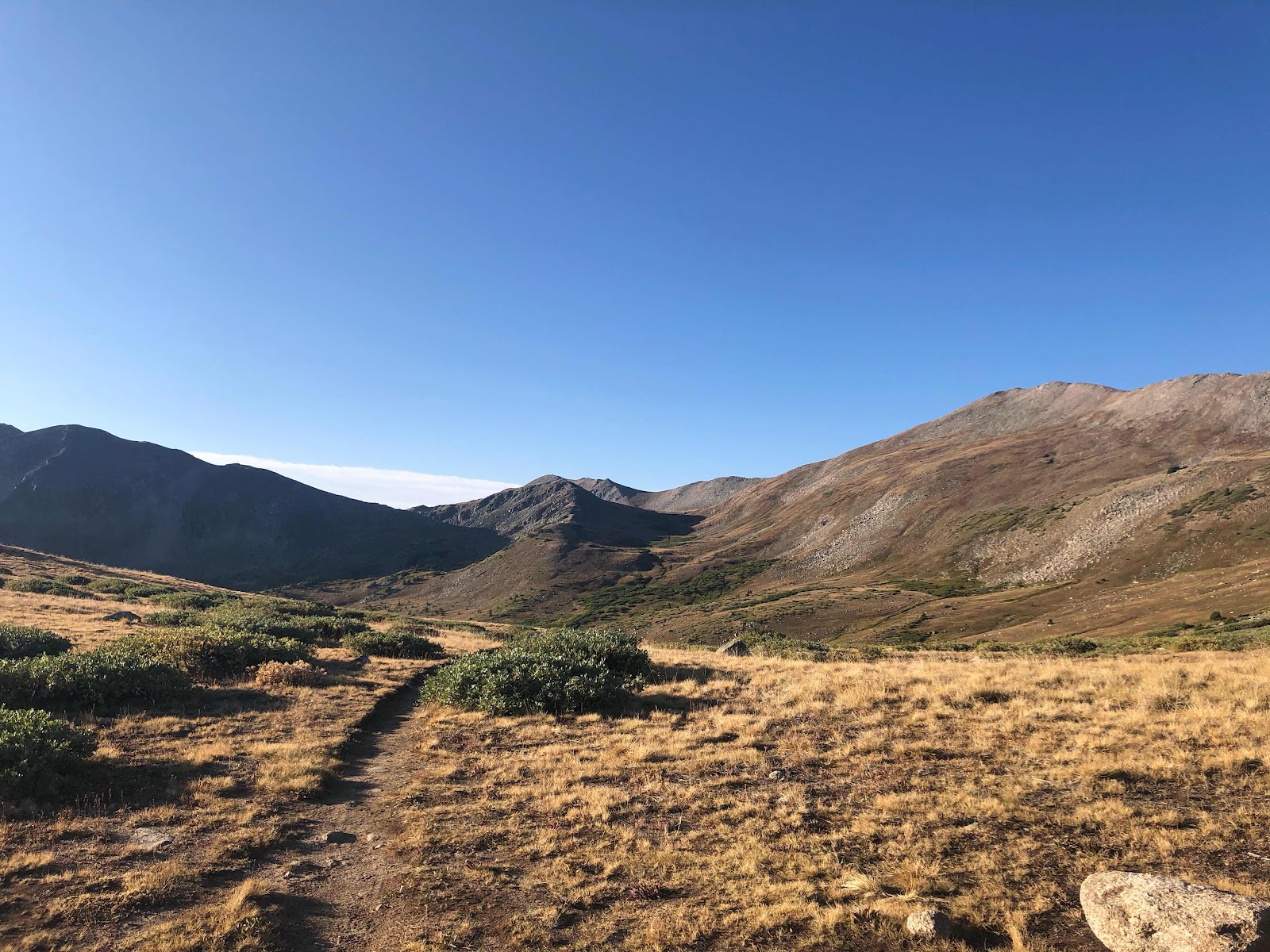 Approaching another pass
After I hiked over my first two passes of the day I had a long downhill before hitting an old railroad bed. It may seem strange, but I have been looking forward to this railroad bed for days. It is the easiest 4 miles of the entire trail. It was like walking on a road, but much softer on my feet. 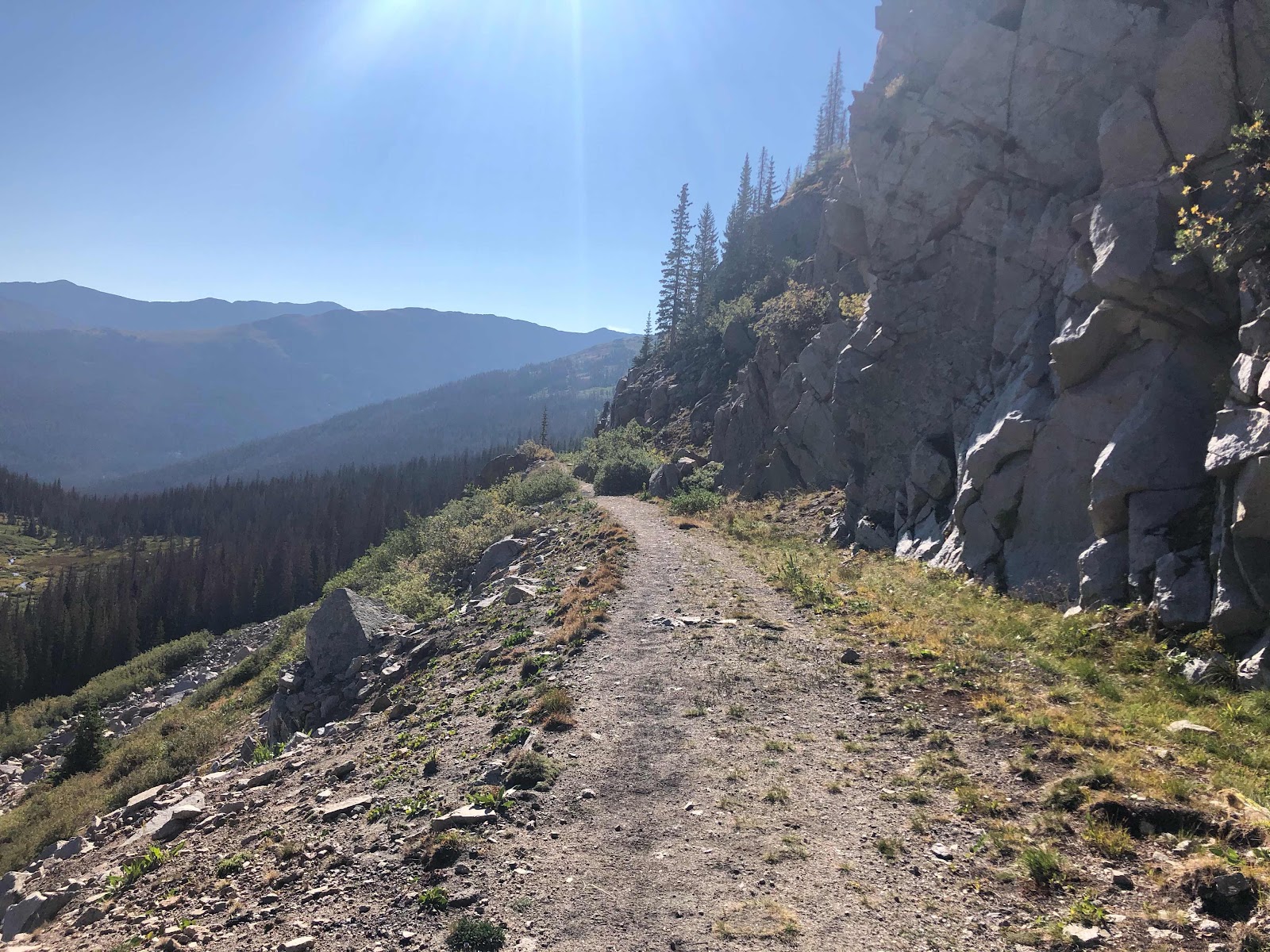 Time to cruise
When I got to the railroad bed I took a break and used my Garmin InReach to get a weather report. I heard that today was going to be hot and dry, I was disappointed to see that it was going to thunderstorm again this afternoon. I hoped the timing would be better than yesterday. I had to major climbs, one in the early afternoon and another in the late afternoon. 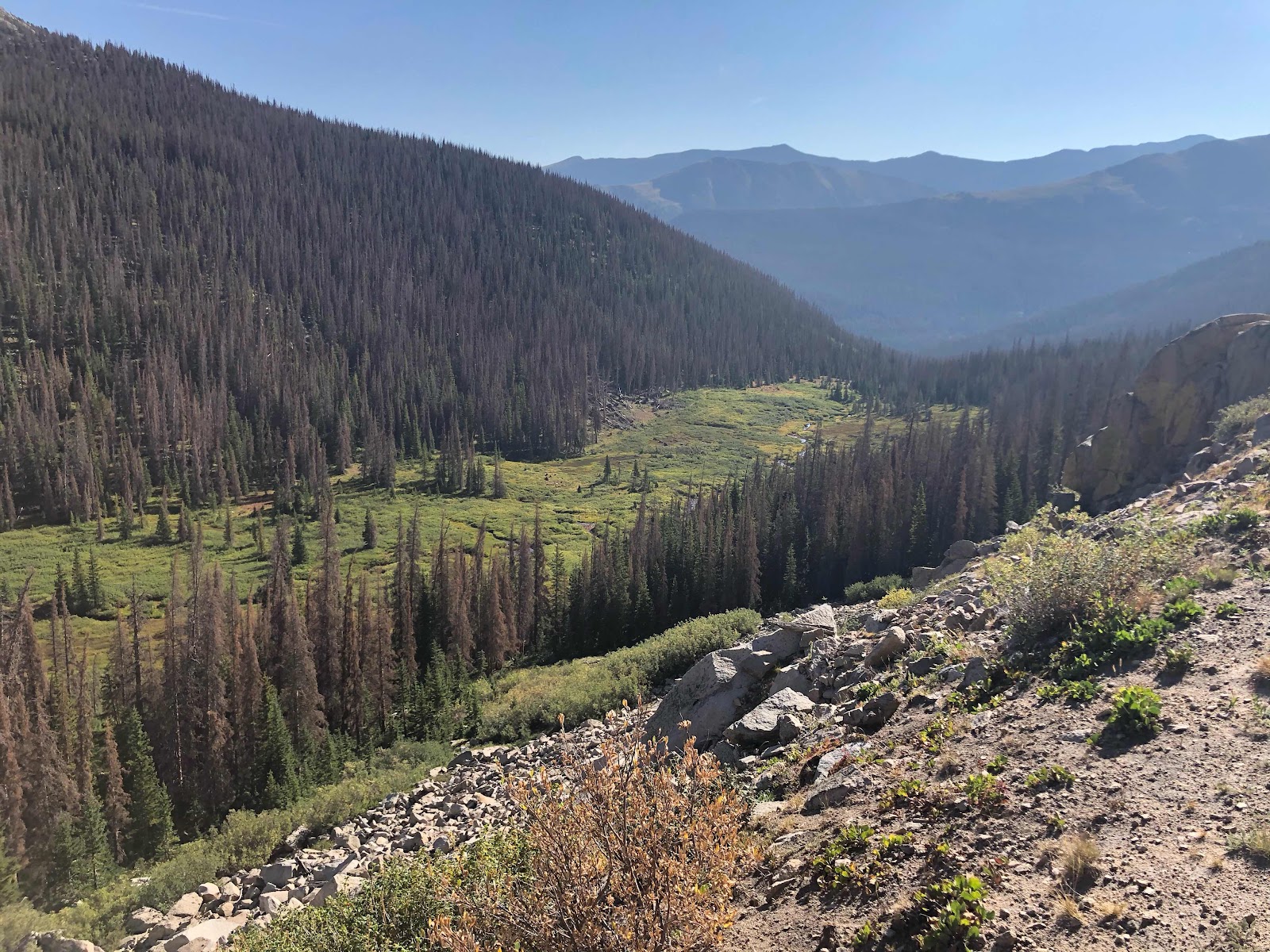 View from the railroad
Once left the railroad bed, I had to hike a few miles uphill on a Jeep 4x4 road. It was not fun. There were a ton of rocks and it was very hot out. I didn’t see any jeeps or OHV’s, but I did get stuck behind an excavator. At the end of the 4x4 road I came across a trailhead parking lot. It seemed like a great place to set out all of my gear to dry. While I was waiting I met a thruhiker named Skunk. He had blown past me on the way up a pass a few days ago. He had a friend meet him at the trailhead and they camped there last night. Home and his friend were going to spend the day relaxing and hiking some peaks in the area. Speed and Grasshopper also caught up to me just as I was leaving. We chatted briefly and they told me Flaming Hot camped with them last night. I was camped .3 miles down the trail from them. 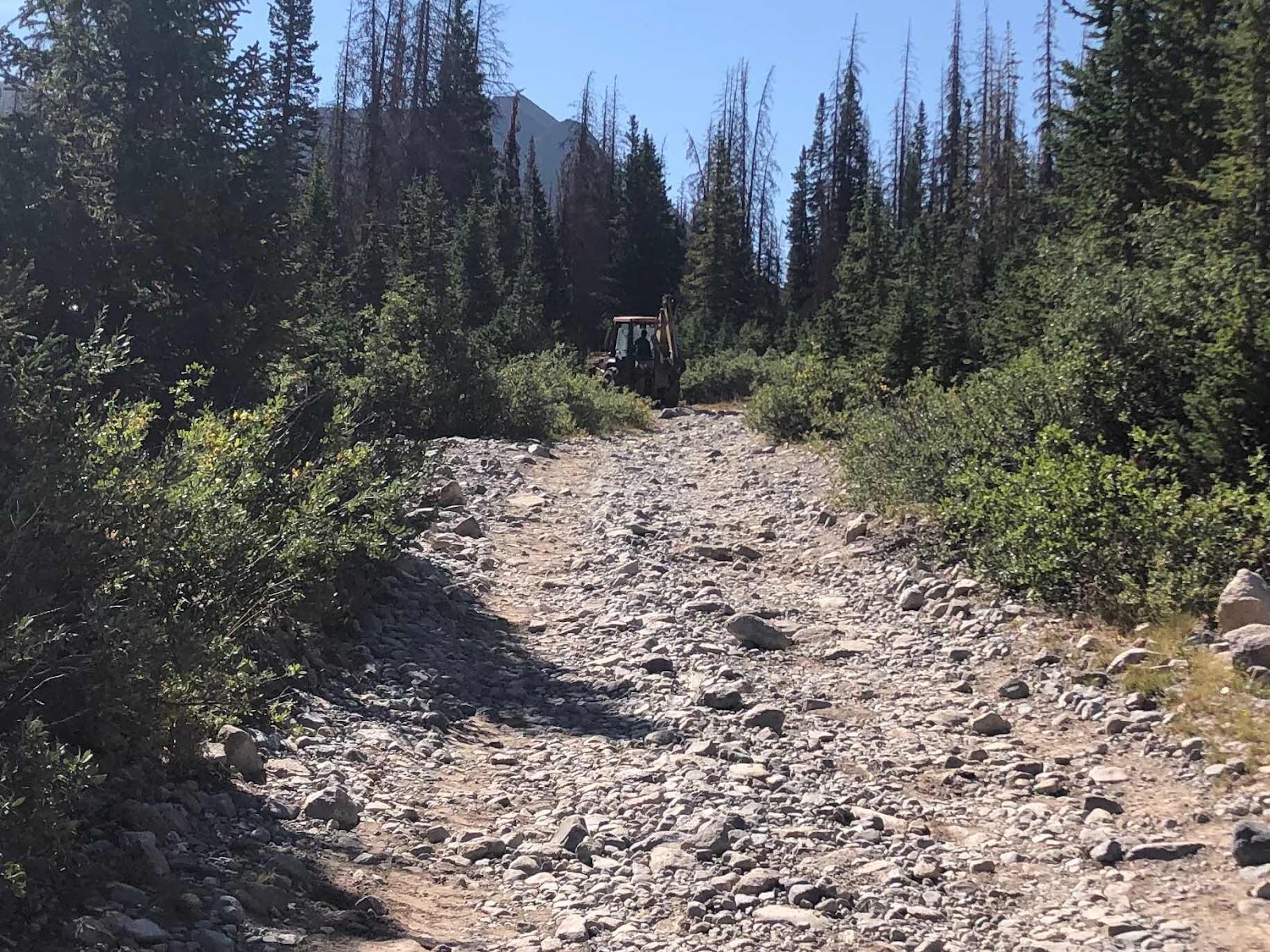 4x4 Road
Once all of my stuff was dry I got packed up and back on trail. The weather still looked good, but I didn’t want to take any chances getting caught on a big mountain in a thunderstorm. I made it up and over the Pass with no problems. While I was working my way down the clouds began to roll in. On the way down from the Pass I went by several alpine lakes. It was so hot out I was tempted to go for a swim, but I really don’t like hiking in wet shorts so I kept going. 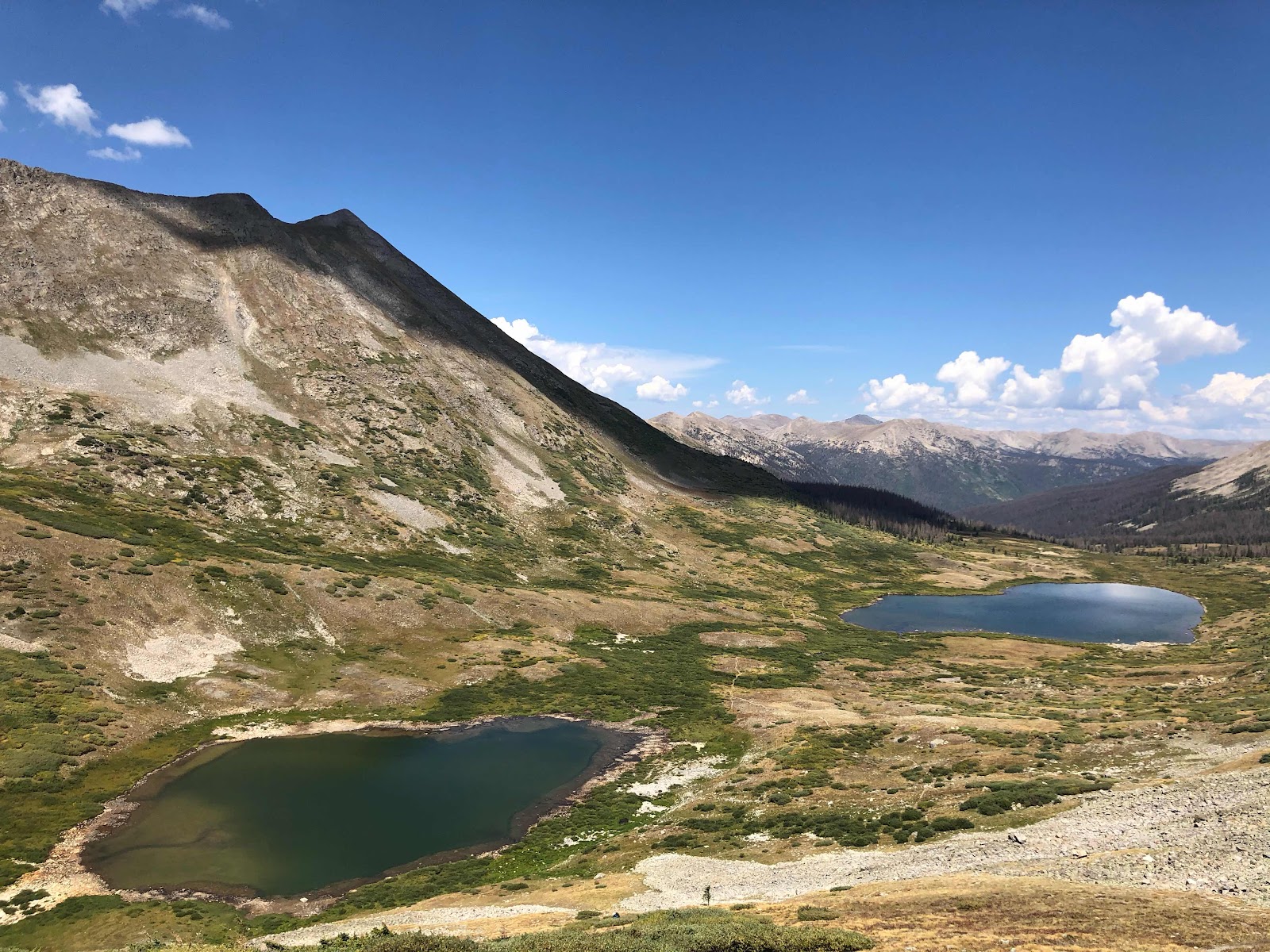 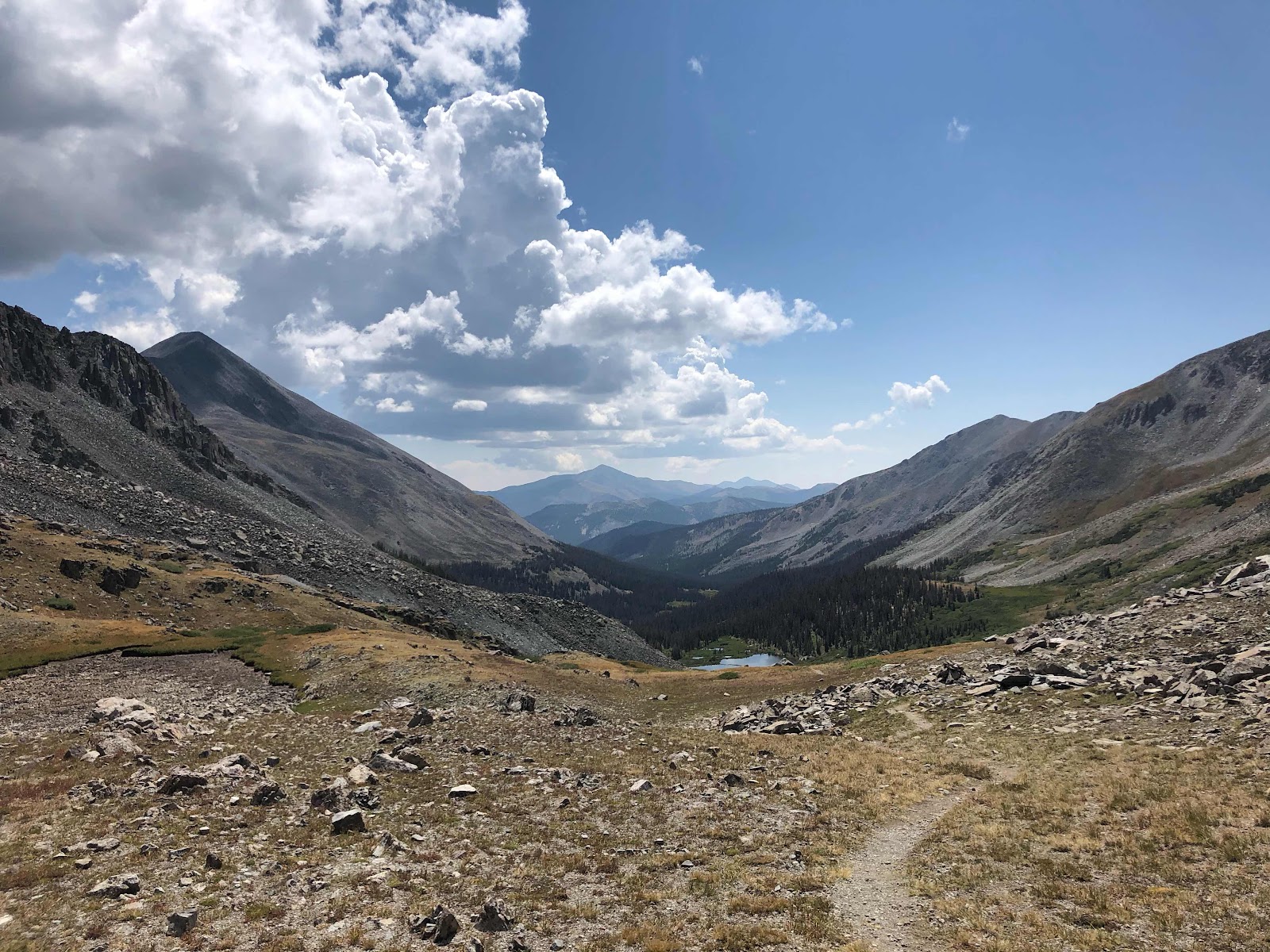 Lake I passed on the climb up
Just as I hit tree line it began to rain. It is amazing how quickly the temperature drops when the rain starts. It felt like 90 degrees out, then when the storm came I could have sworn it was 50’s. I put away my solar panel and battery pack before donning my rain jacket. It rained off and on for the next few hours. There was also a good twenty minutes of small hail. As I was dropping elevation I could see lightening hitting a large peak east of me. I had timed things perfectly. 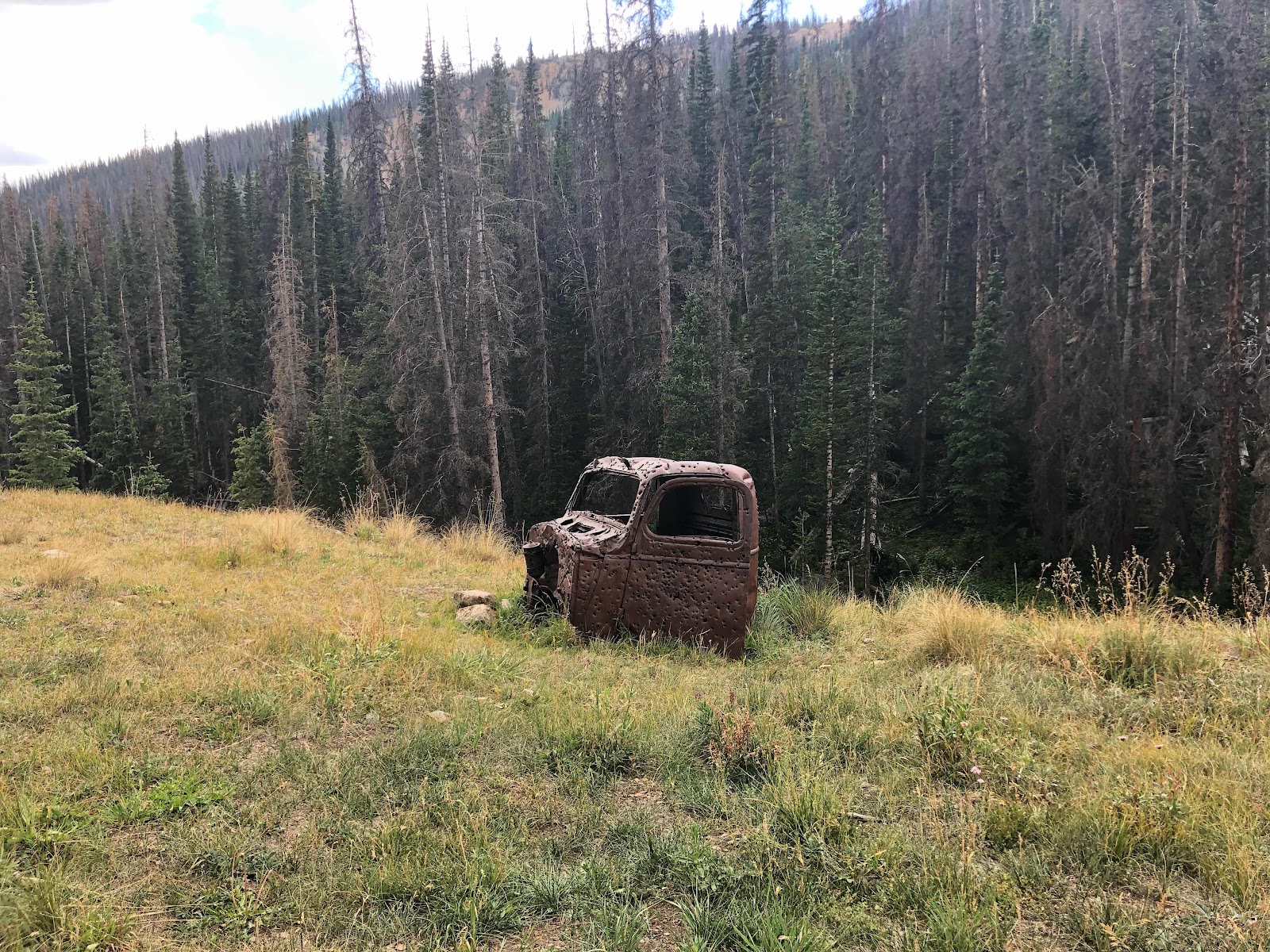 Random rusty half of a truck full of bullet holes
I made it to the Boss Lake Reservoir trailhead in good time. I sat under a tree for close to an hour hoping the storm would pass by. I had to gain about 1,100 feet of elevation and really didn’t want to do it during a storm. Finally the thunder and lightening moved on and there was only a light drizzle. After sitting for so long I was moving really slowly climbing up to the reservoir. 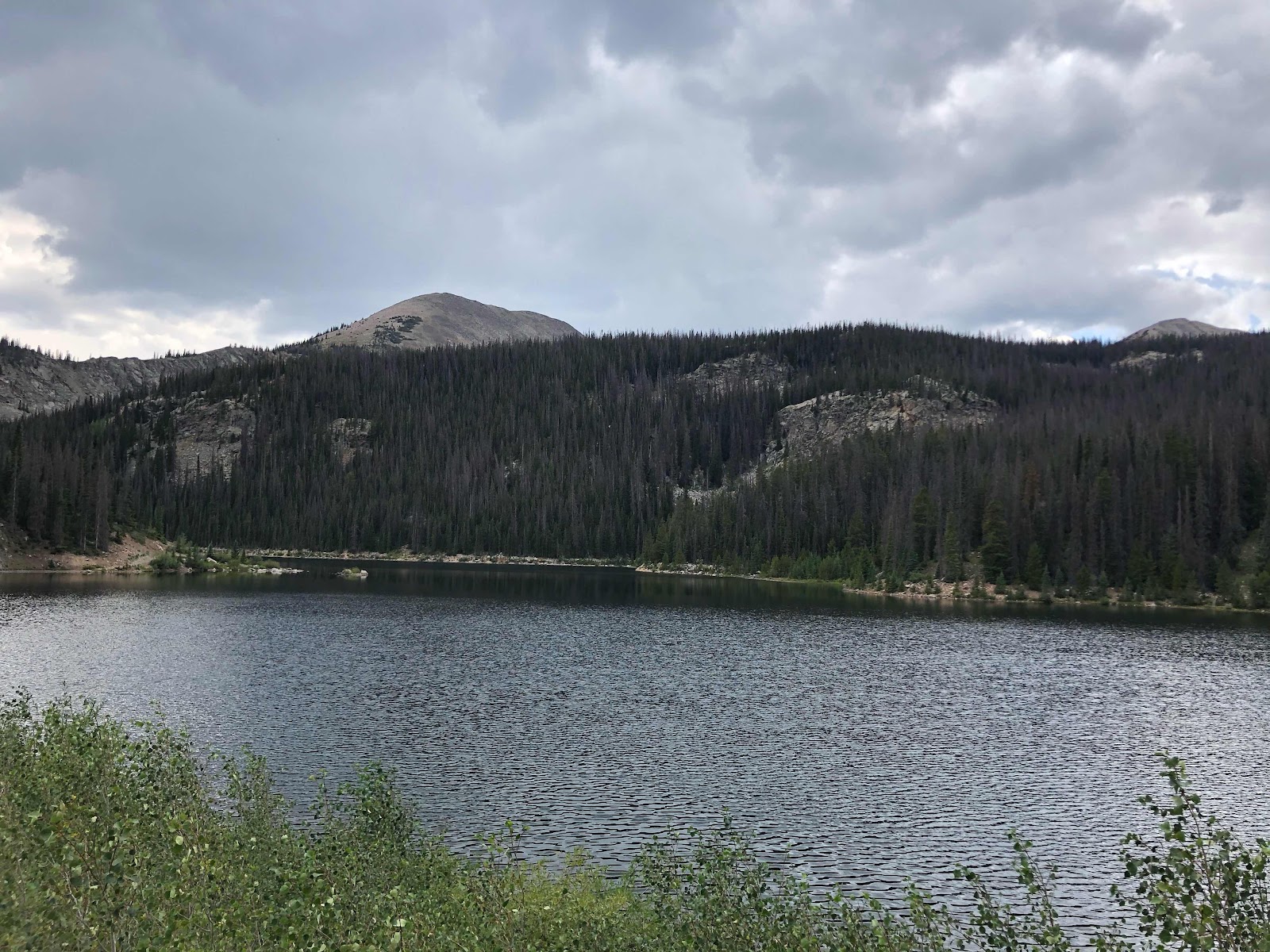 Boss Lake Reservoir
I decided I had enough time to hike another 3 miles before setting up camp. That was really as far as I could possibly go today. If I went any further I was going to be above 12,500ft on an exposed ridge line. I’m only eight miles away from Monarch Pass where my friend Jess is meeting me. There was no need to take a risk by pushing any farther. 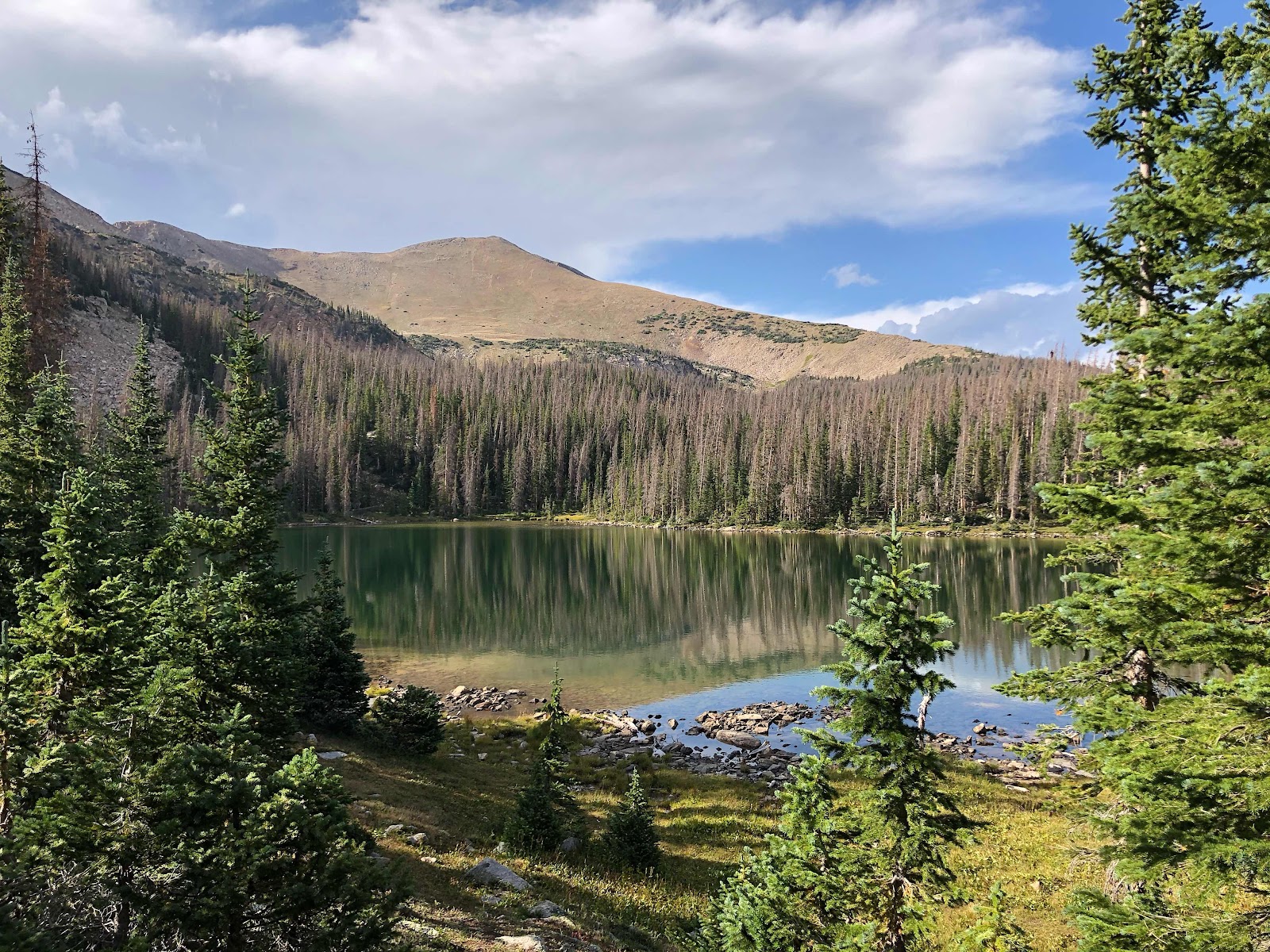 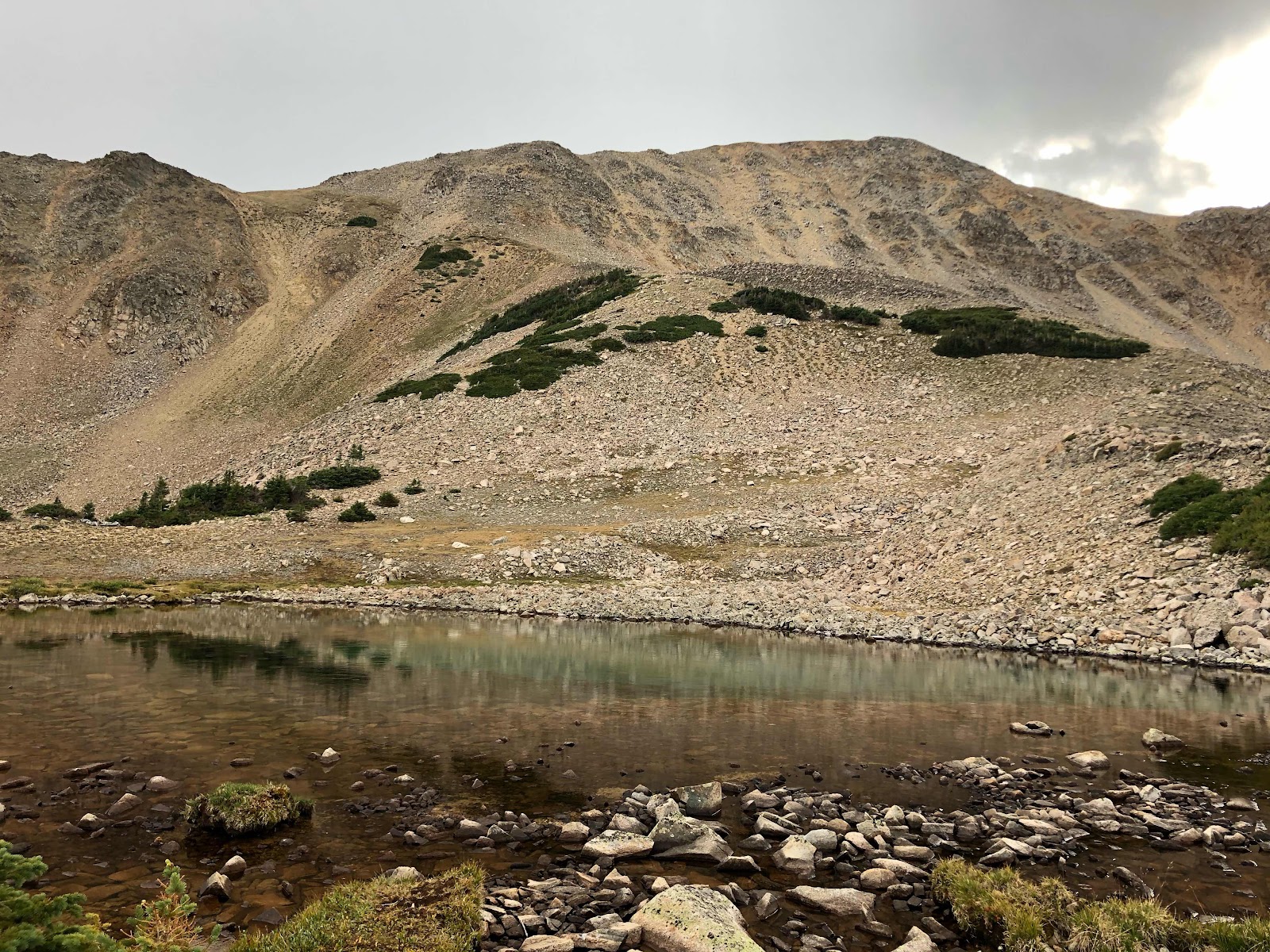 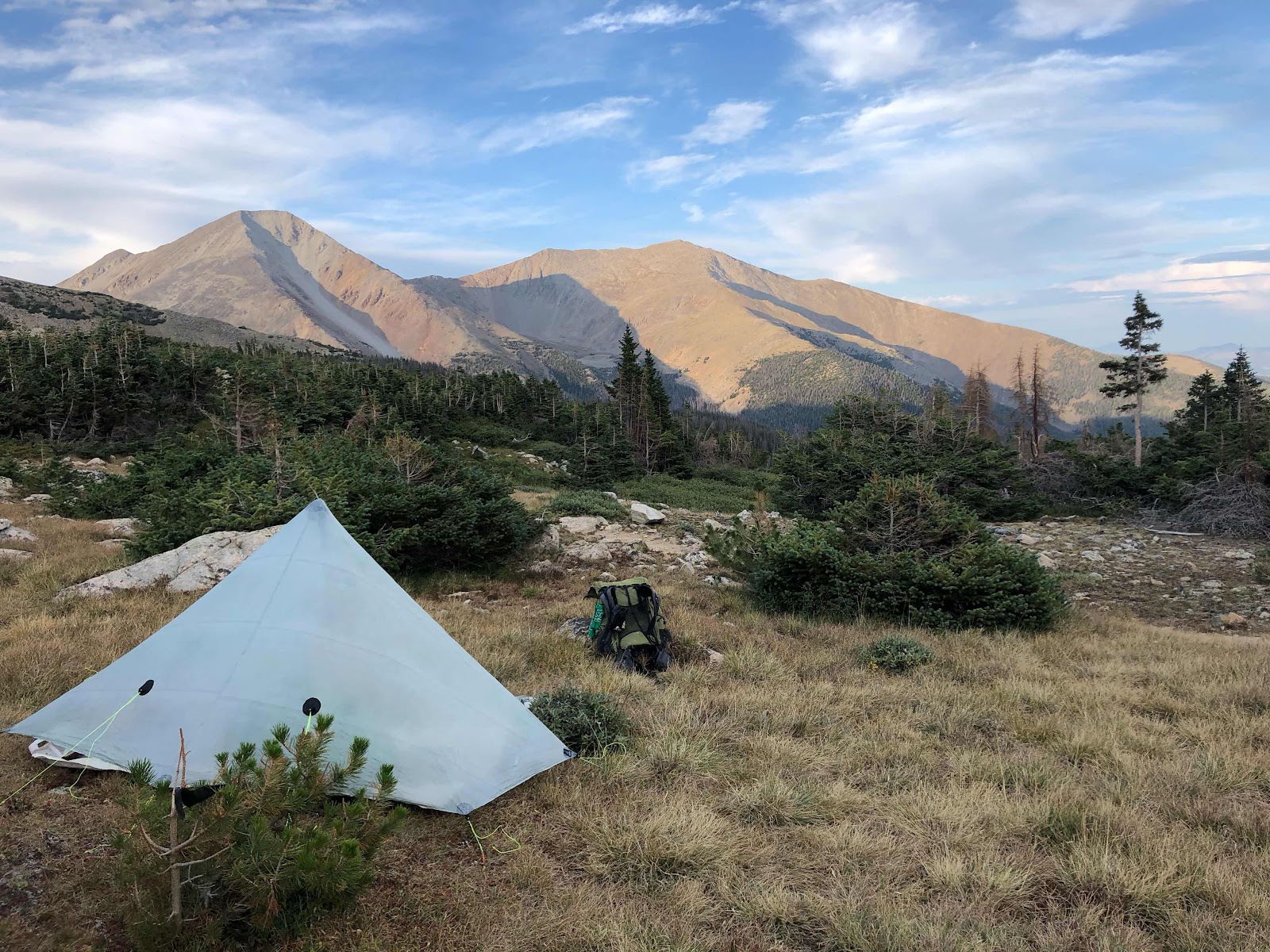 Home for the night
“There is no success without hardship.”
- Sophocles