I didn’t sleep very well last night. The spot I set up on wasn’t very flat, as a result I slipped off my sleeping pad all night. It was also really cold again. Around 3:30 I was incredibly chilled. At 5am I woke up to see a bright light coming towards me really fast. I was understandably confused as it got closer. It took my sleep befuddled brain longer than it should have to figure out that it was somebody trail running. After that I just waited for my 5:45am alarm to go off. It was cold again this morning as I started hiking out of camp. This was the second time this trail I started off wearing my rain jacket as an extra layer against the cold. I knew today was going to be physically challenging. I had quite a bit of elevation change over the course of the day. I was just happy I didn’t have any huge descents like yesterday or the day before. What I didn’t count on was how rocky the trail was. It reminded me of hiking the Appalachian Trail through Pennsylvania. 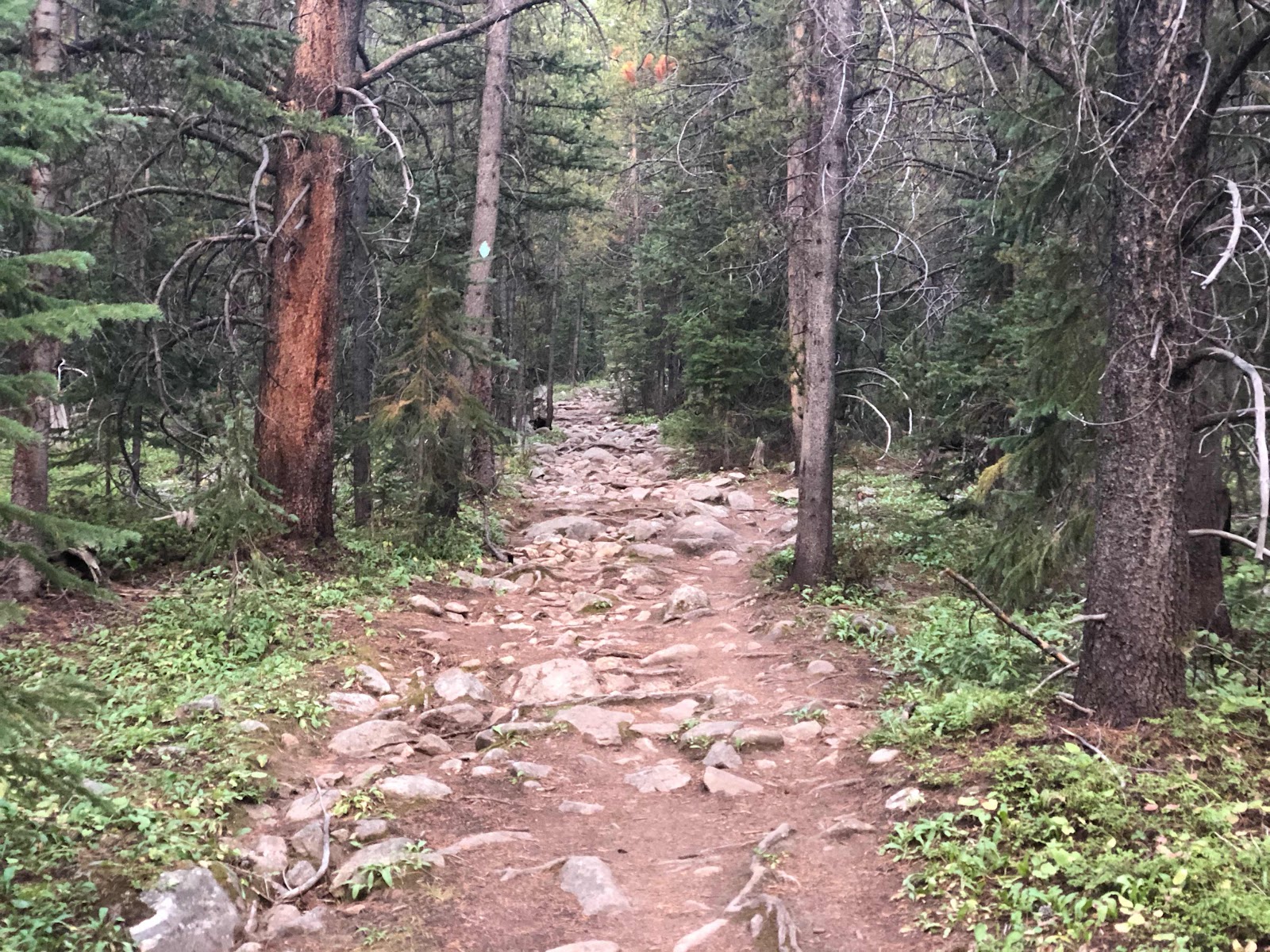 Rocky start to the day
I got up and over the first climb pretty easily. I hiked through prime moose territory, but I was disappointed by not seeing one. I made it three miles before having to stop and take my rain jacket off. At the top of the climb I went straight back down bleeding off all of my hard earned elevation. 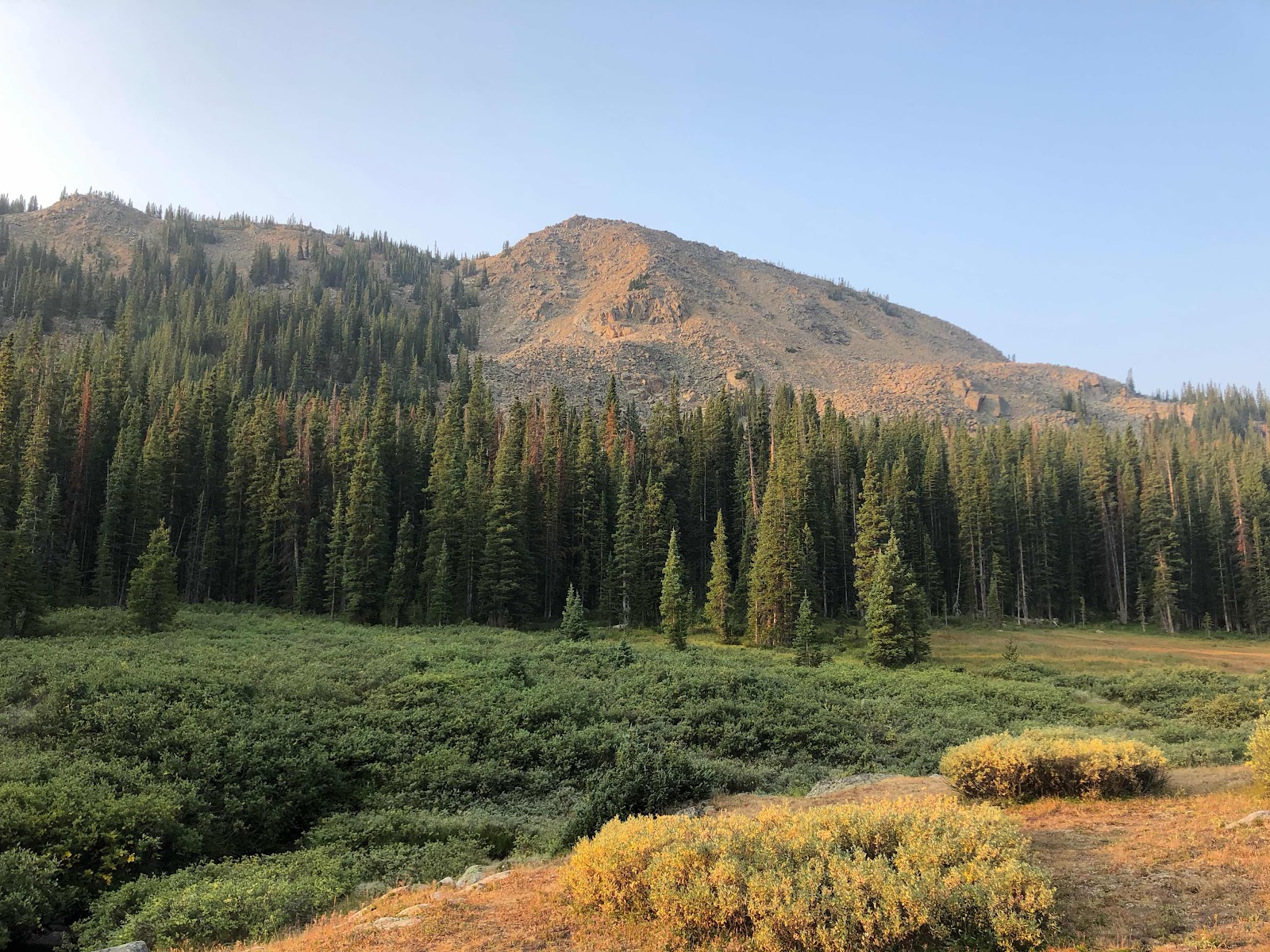 Prime moose territory
I thought I remembered this section fairly well from 2018. I remembered it as being really easy and fast. I can’t seem to get my memories to match reality. I puzzled over it for most of the morning. I remember the Colorado Trail being really easy. I finally figured out what the problem is. I don’t have 1,300 miles on my legs. As a long distance thruhiker you take for granted being a superhuman hiker. You forget about the miles you put in at the being of a trail to make the middle and end of trail seem easier. I’m doing very respectable miles every day, but at the end of the day I feel horrible. I’m enjoying the challenge of getting big miles in, but I’m not sure how much I’m enjoying the trail itself. 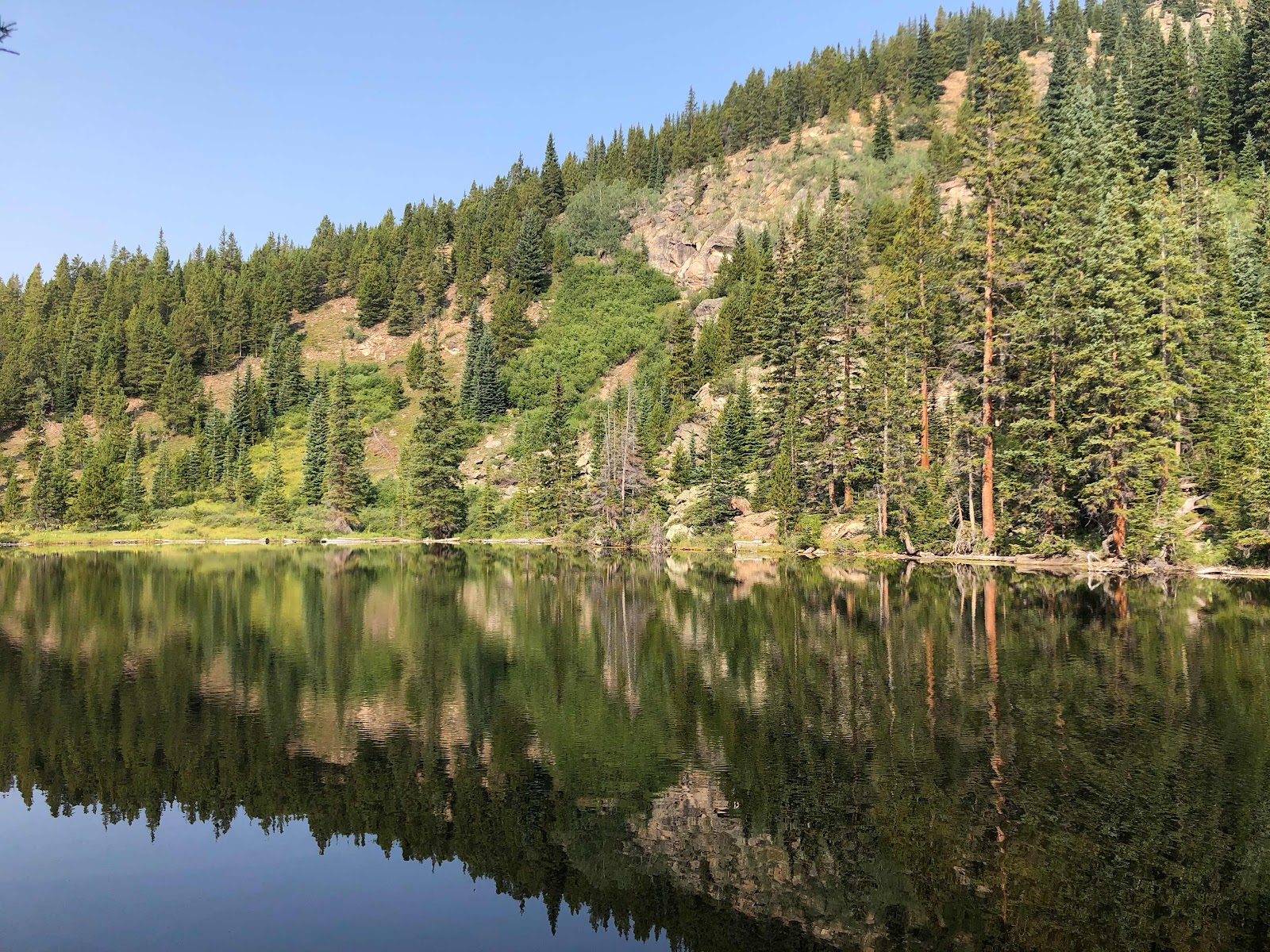 Awesome lake I had second breakfast at
Today’s section of trail goes right past Mt. Massive, the second highest mountain in Colorado and the third highest in the lower 48. I spent a good part of the day trying to make up my mind on if I was going to hike it or not. I decided to make the decision at the end of the day. If I could make it to where the trail split off from the CT by the end of the day, I would take the time to summit it tomorrow morning. 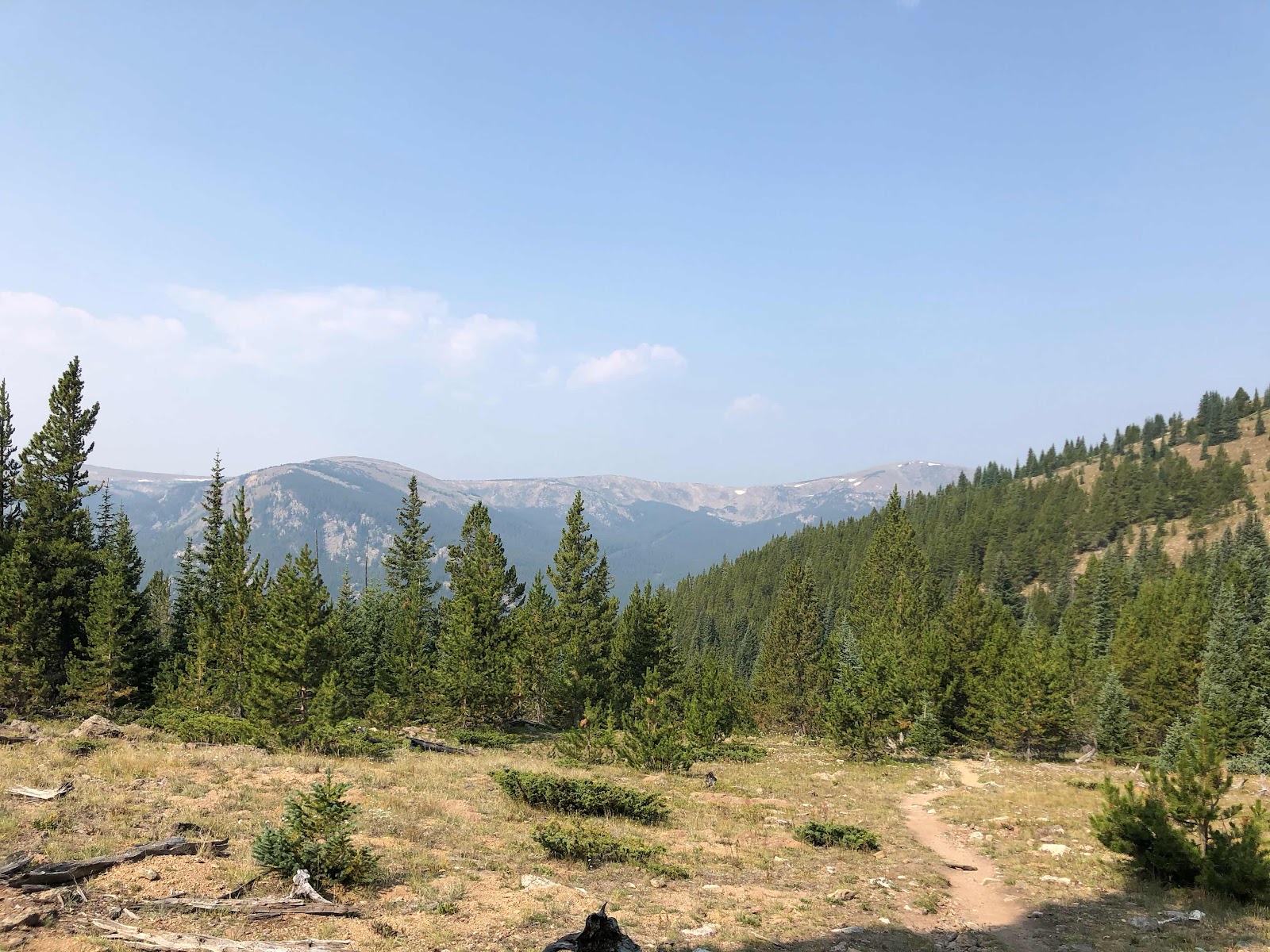 Holy Cross Wilderness
I saw an impressive amount of day hikers today. I am hiking in an area with a lot of easily accessible trailheads. I even passed by a group of fifteen people out for an overnight backpacking trip. Other than Boy Scout troops I don’t think I have ever seen such a large group. The climbs I did today were short and steep. I was really pleased with my ability to get up and over them. I didn’t feel like I struggled as much as I did yesterday. Today was the easiest day for water to date. I think I had a reliable water source at least every two miles. It was nice to not have to worry about it. 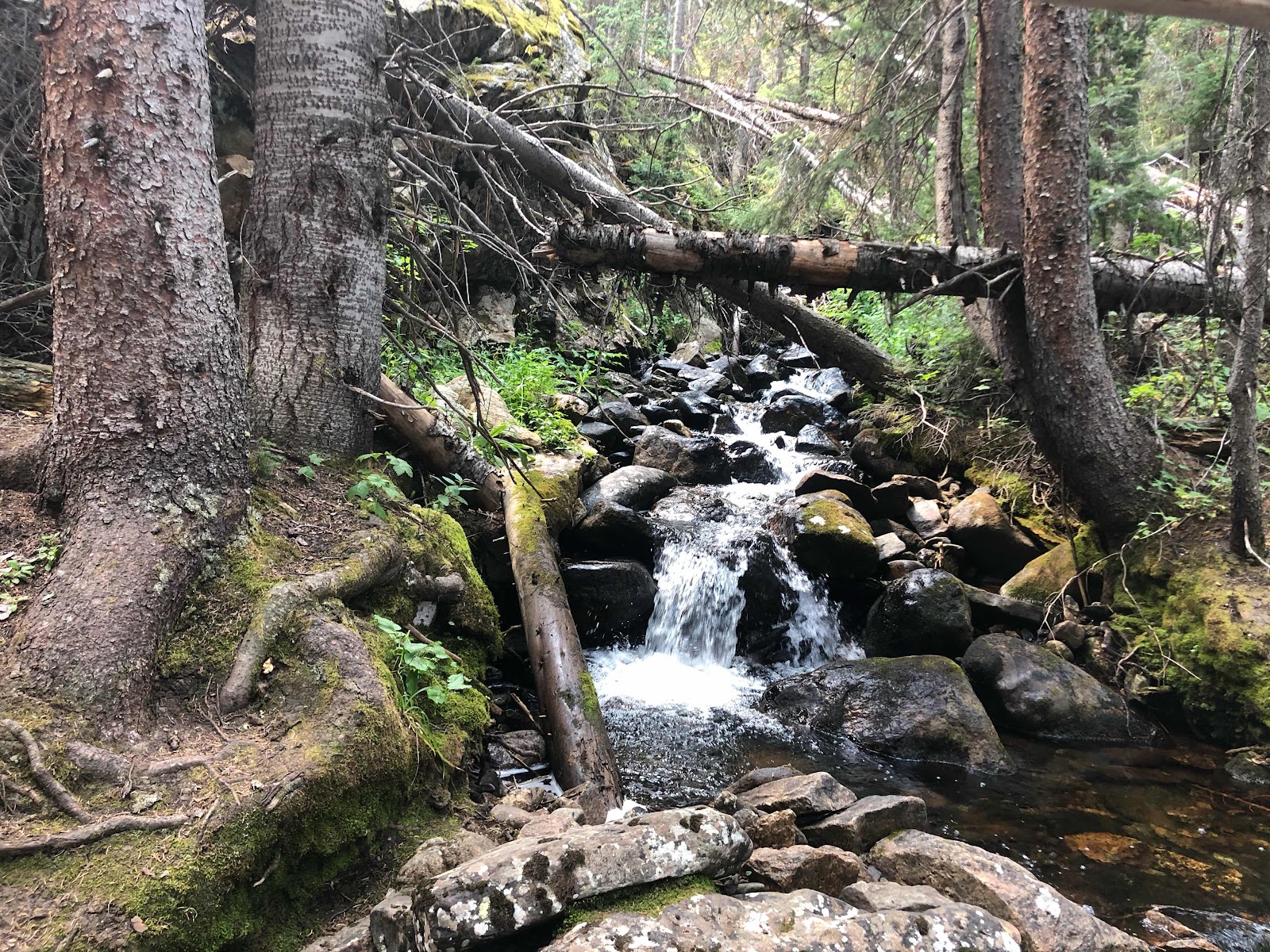 I cruised up 1,100ft climbs and struggled down 1,100ft descents. My feet, legs, and knees were screaming in protest. I hit the Mt. Massive trail around 6 o’clock. I had pretty much decided I was going to hike it tomorrow. What I didn’t take into consideration was that today was Saturday. Every single possible camping spot in the area was taken. The only possible spot I could have camped on was close to a guy and his large dog. I asked him if he minded that I camped close to him. I was told that his dog wasn’t very social and I was taking the risk of being bitten because he wouldn’t keep him tied up all night. Okay, I guess I wasn’t camping close to the trail. I found another spot about half a mile down the CT. As I was trying to decide what to do I spoke with several people who had just summited Mt. Massive. They said the smoke was really bad and they didn’t really have a view. That sealed the deal for me. I decided to skip Massive and hike down to the trailhead. I am very grateful for the flexibility I learned on the CDT. My original resupply plan called for me to hitch from the Mt. Massive Trail head into the town of Leadville. I arrived at the trailhead at 7:15pm. It was a 45 minute drive to Leadville. I decided not to bother hitching tonight. I didn’t see the point of getting into town late at night. Hitching tomorrow morning would be problematic because most people don’t leave this area for Leadville until late afternoon. I discovered I was only 10 miles from the town of Twin Lakes. I could hitch into Leadville from there. Problem solved, by going into Leadville from Twin Lakes my next food carry would be 10 miles shorter. Win- win situation. 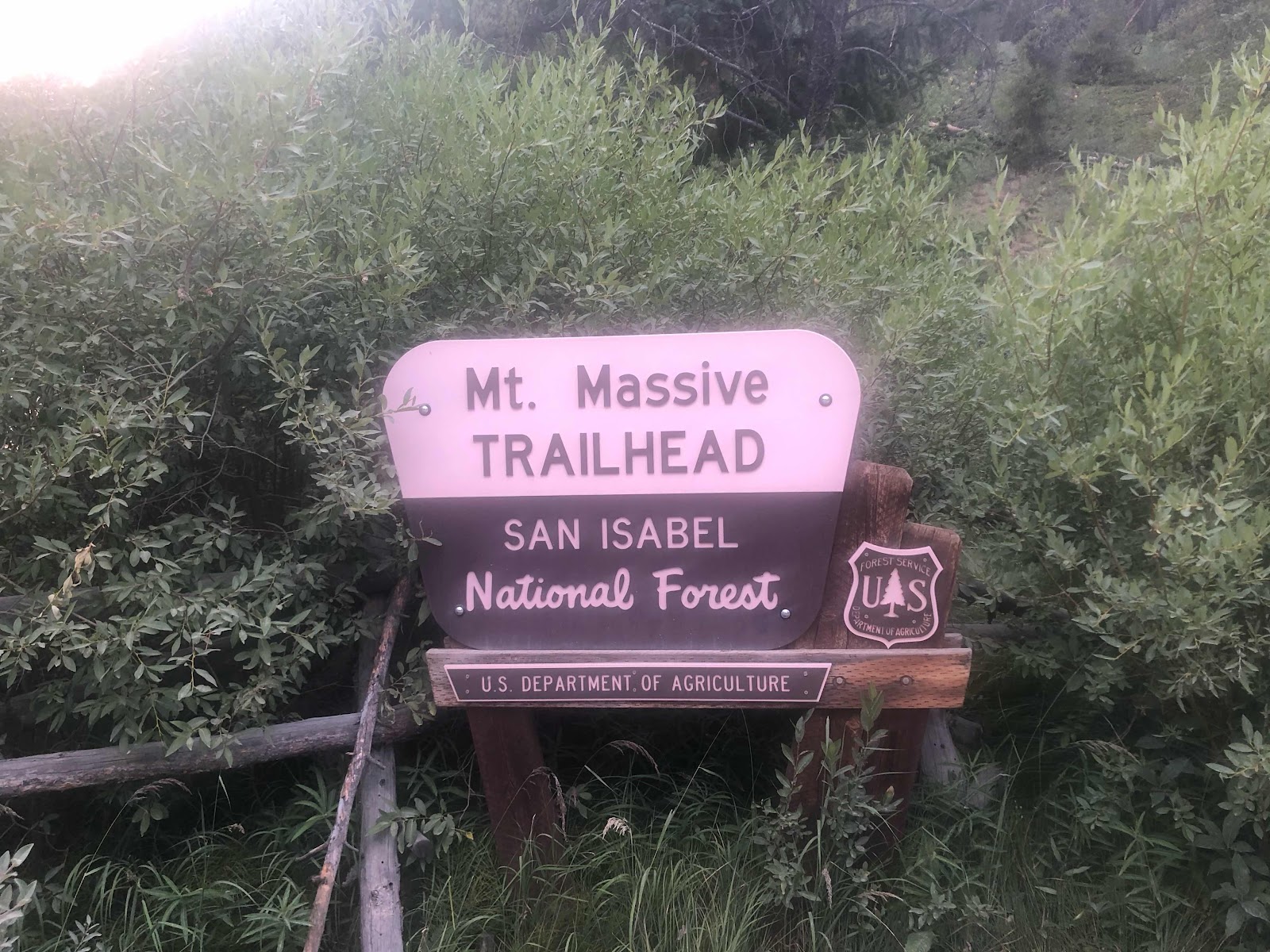 Mt. Massive TH
I was completely exhausted by the time I got to the trailhead. I found a relatively flat piece of ground and started to setup camp. A large group of car campers stopped me before I really got started. They explained that there was a really great spot about 300 yards down the trail. I told them I was really tired and this spot would work just fine. They countered with, we are going to be really loud and don’t want to make you mad. Ok, 300 yards down trail it would be. They were right, the other spot was great. I was too tired to even think about cooking dinner. I got my cowboy camp set up and ate a few handfuls of flaming hot Cheetos. I was asleep by 9 o’clock. Just before midnight a bunch of dirt bikes went flying down the road with music blaring. I immediately fell back to sleep. 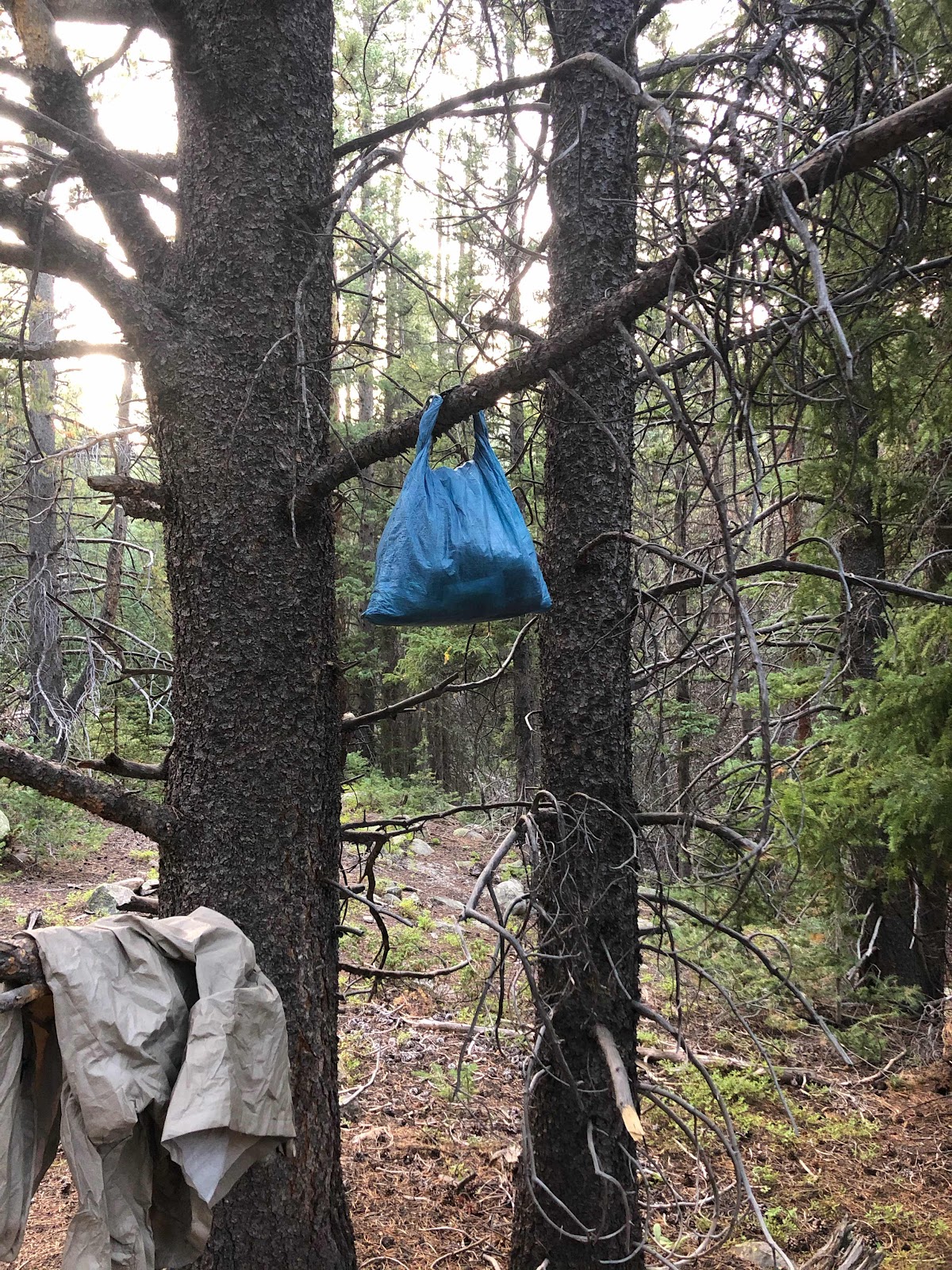 Rodent hang of my food bag

"Unfortunately, we can never truly know if we're making the right decision. What we do know is that wherever we are, that's where the Light wants us to be. It's the best place for us to be now. And as long as we don't try to control the situation, then we won't end up in the place we shouldn't be."
-!Yehuda Berg