Just as I finished writing my blog last night the wind really picked up. It made it difficult for me to fall sleep. Ever since the nighttime temperatures have risen I have been cowboy camping. Last night I was camped in a very sandy spot with no protection. I ended up eating a lot of sand and dirt. Eventually I fell into a light sleep. I think I tossed and turned for most of the night. When my 4am alarm went off I felt like I had just laid down to sleep. I really wanted to just roll over and turn it off, but it was town day so I got up and hurriedly packed up. Mangus was ready to go about the same time as me so we hiked out together. Turtle was just beginning to stir so we figured he would catch us before town. I was really glad we didn’t try to squeeze in an extra mile last night. We would have had to climb another Mesa. There were some steep parts and it was hard enough to do by headlamp. Last night I would have been carrying 4L of water at the end of a long day. Mangus and I were rewarded with great views all morning. We spent most of the early dawn hour walking the rim and looking into the plains below. 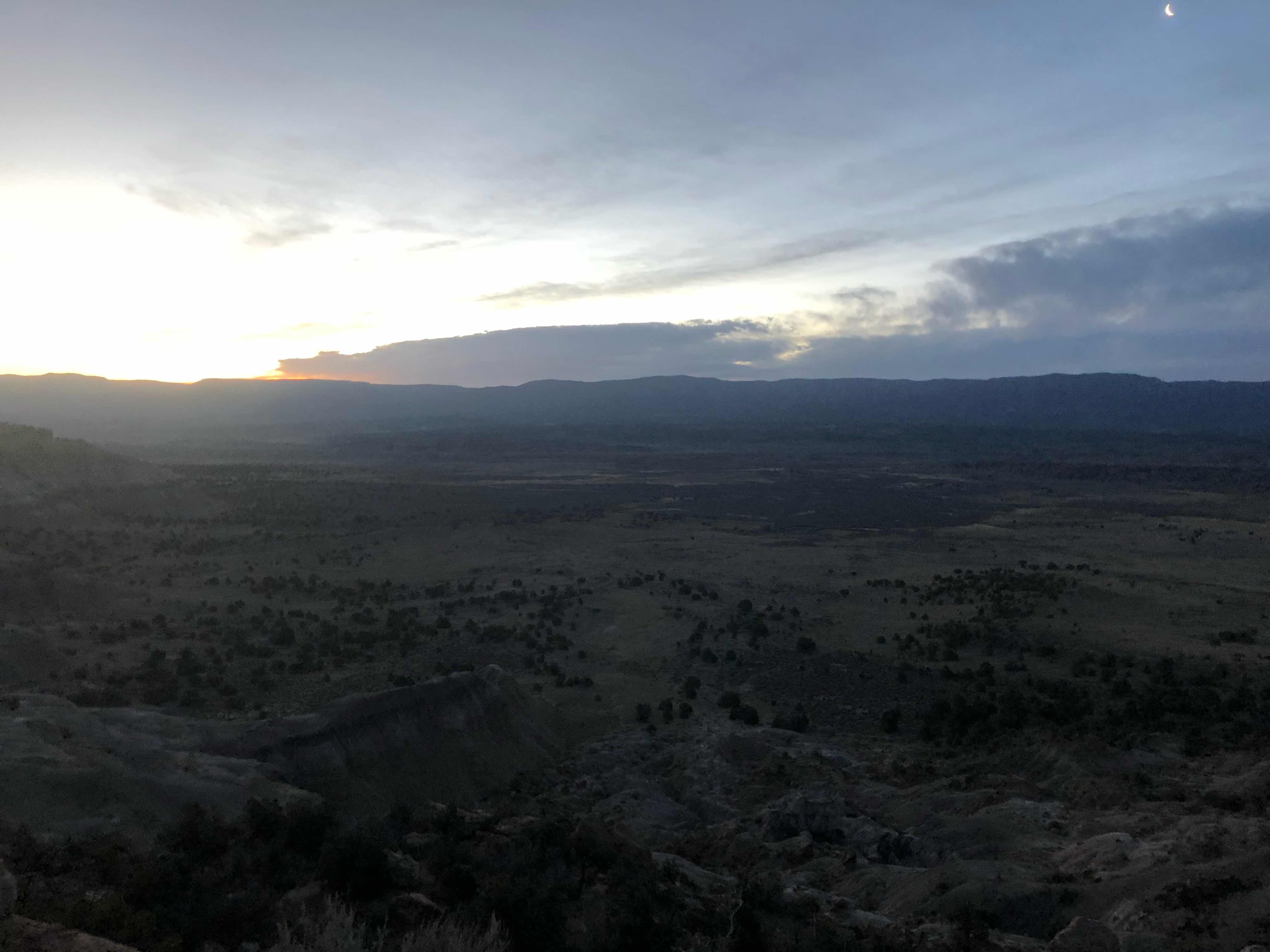 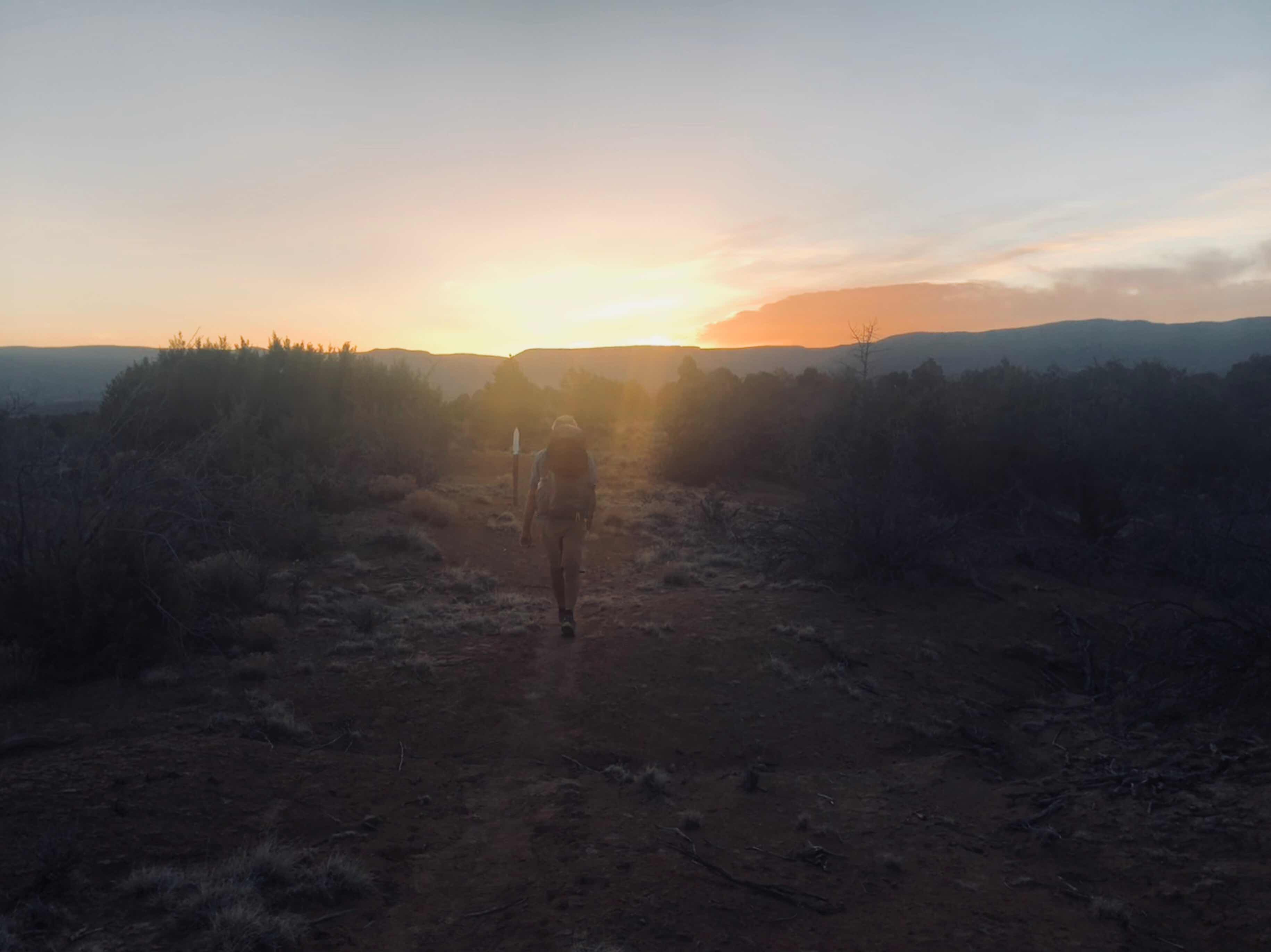 Mangus leading the way
We had hoped to hike the twelve miles into town by 10 o’clock. I’m not exactly sure what to call today. I don’t feel comfortable calling it a nero, since I definitely hiked more miles than nearly zero. On the other hand we made it into town ridiculously early. I’d be tempted to call it a half day, but that doesn’t sound right either. Yes, I hiked about half the miles I usually do, but once again we got in early. I think it is time we invented a new word. I’m open to suggestions. For now I’m calling it a Whatchamacallit until something better comes along. I figured that after ascending the Mesa the rest of the hike would be easy, but that wasn’t the case. Everything looked good on the map and on the elevation profile, but that didn’t show the loose deep sand we had to slog through. After a few miles of that I was really feeling it in my hip flexors. Just when I thought I couldn’t take it anymore the trail turned into a dirt road through a cow pasture. I have made my peace with walking dirt roads. They are just part of this experience and are way better than hours on a paved road. At one point I had to step over some gross cow after birth. It must be calving season because I saw a lot of young cows. 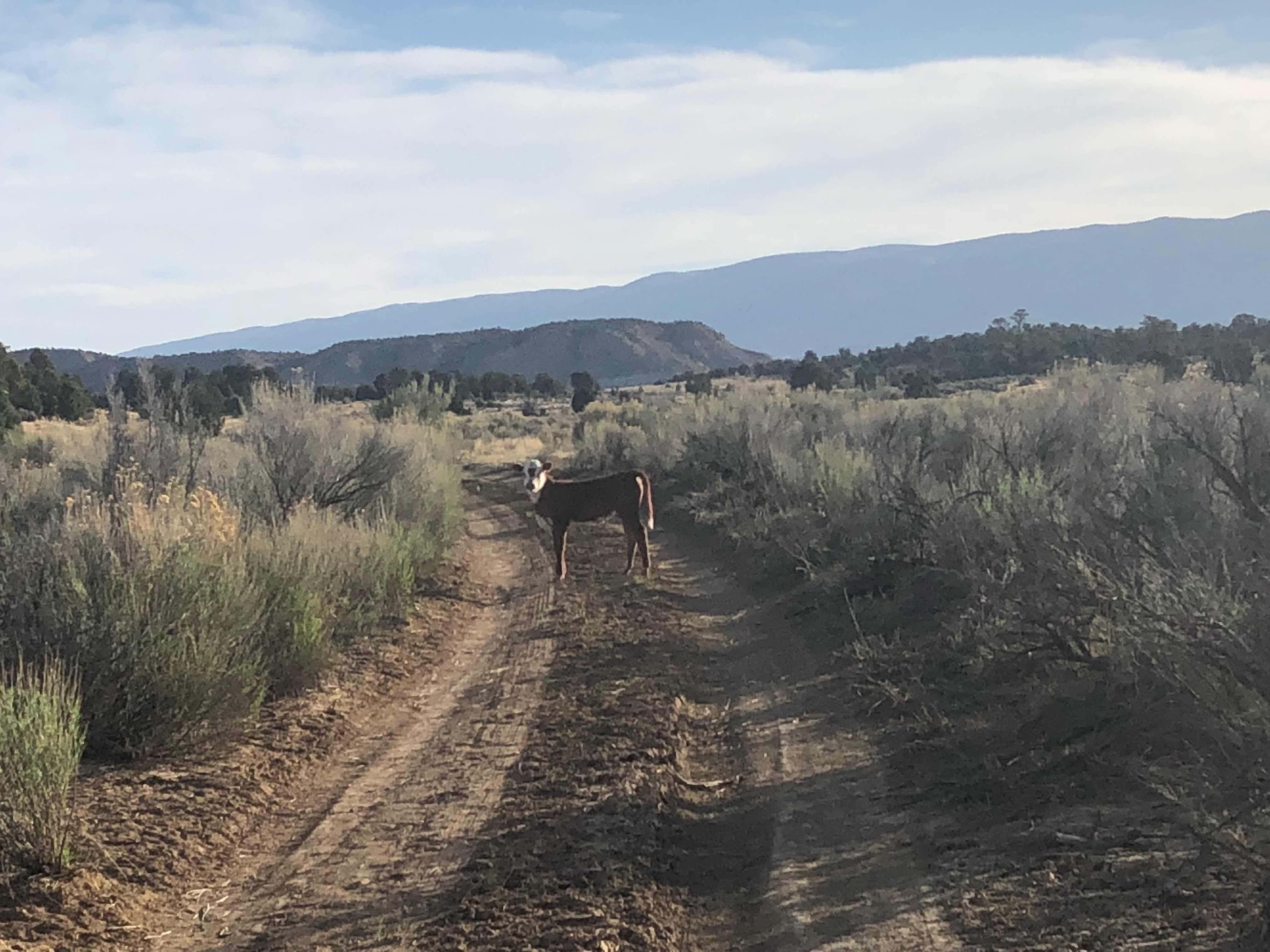 Anyone care for some veal
I stayed on the dirt road for awhile and enjoyed the views. I could see some huge Mesas all around me. The weather was also very pleasant. This made for a wonderful morning. When I hit the paved road I decided to wait for Mangus to catch up. I knew he was right behind me and I feel safer walking on the road with someone else. The road walk was only 4.4 miles and the thought of a good breakfast spurred me on. We made it into town at 9:40. The Cuban Cafe was listed on Guthook as one of the best breakfasts on trail and it did not disappoint. I had a breakfast burrito with something called carne adovada. I had never heard of it, but Mangus said I had to try it. I should have asked more questions when the server asked if I wanted a half or whole burrito. I just thought it was weird to serve a half burrito. Well the full burrito ended up being two giant burritos. My hiker hunger was not up to the task of finishing. The carne adovada was delicious, even if I’m still not sure what it is. 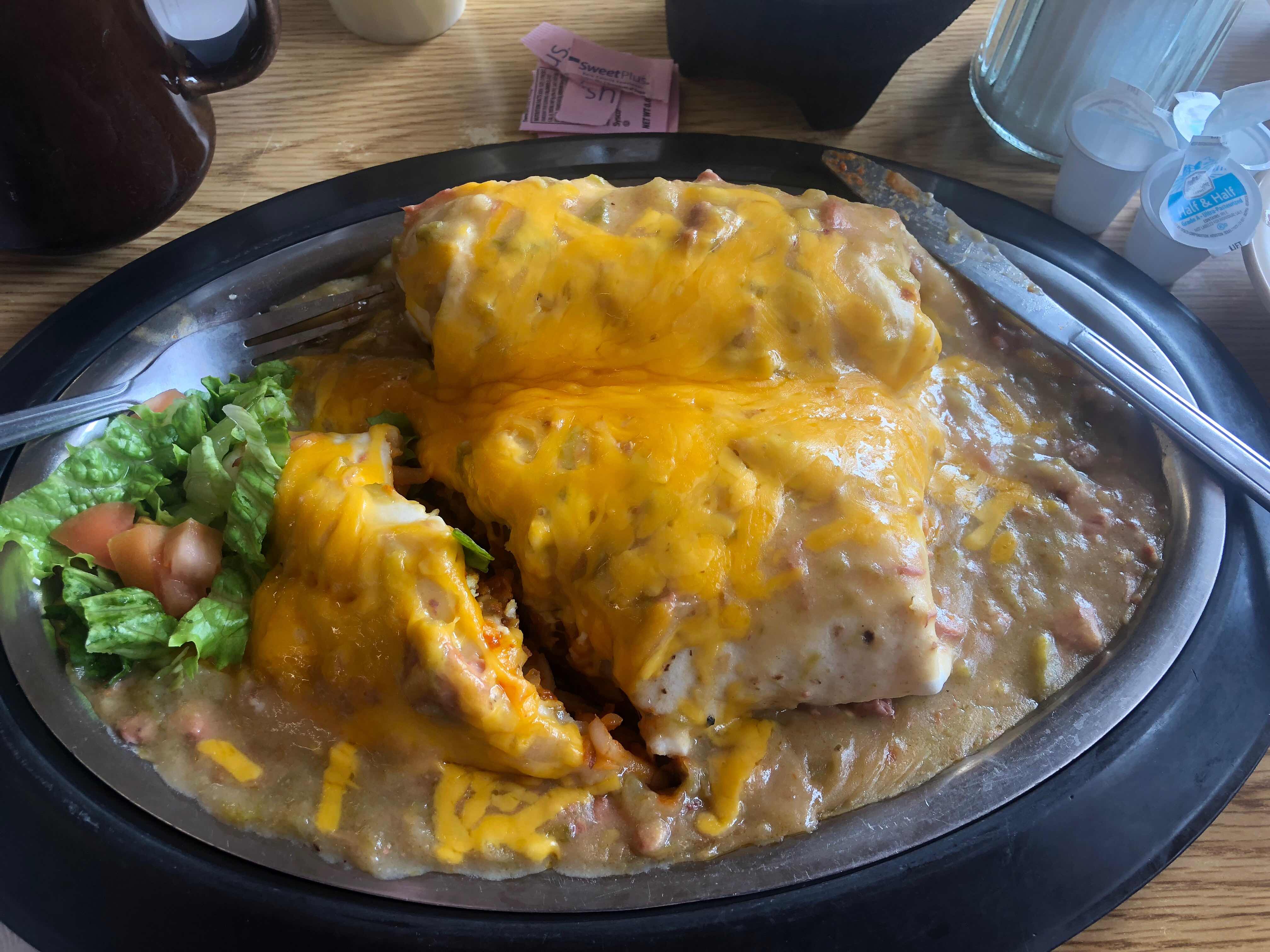 Sooooo much food
By the time we left the cafe I was in a food coma. We walked a little ways down the road, which counted as trail miles, and found a motel for the night. The rooms were so cheap we all decided it would be nice to have our own room. I set about taking care of my town chores in earnest. I took a long luxurious shower. Someone had even left shampoo and conditioner in the hiker box. Most cheap motels don’t have the best shampoo and finding conditioner is rare. I prewashed my socks in the sink before doing laundry because with the desert grime they never come out clean enough in the laundry. I went through my remaining food and discovered that I had almost enough snacks to last until the next time I resupply. That definitely helps out my budget. I volunteered to babysit our clothes at the laundromat. I had hoped to catch up on answering comments on my blog, but unfortunately I couldn’t get cell service there. Turtle came and relieved me just as I was putting everything into the dryer.
My next chore was to reaupply. The local grocery was more than adequate for my needs. I only needed 2 dinners, 2 breakfasts, and a few snacks. The one thing I desperately needed was canister fuel. I had only 5 or 6 boils remaining in my canister. The local grocery only carried big 17.5oz canisters. I walked down to the hardware store and was displeased to find that is all they carried. I called Ghost Ranch, my next resupply point and they don’t carry canisters. I resigned myself to having to carry a big canister. What I usually carry only weighs 7ozs, so it is a pretty big deal carrying the big one. I have never had to do that on a long distance trail before. Oh, well. You win some and you lose some. 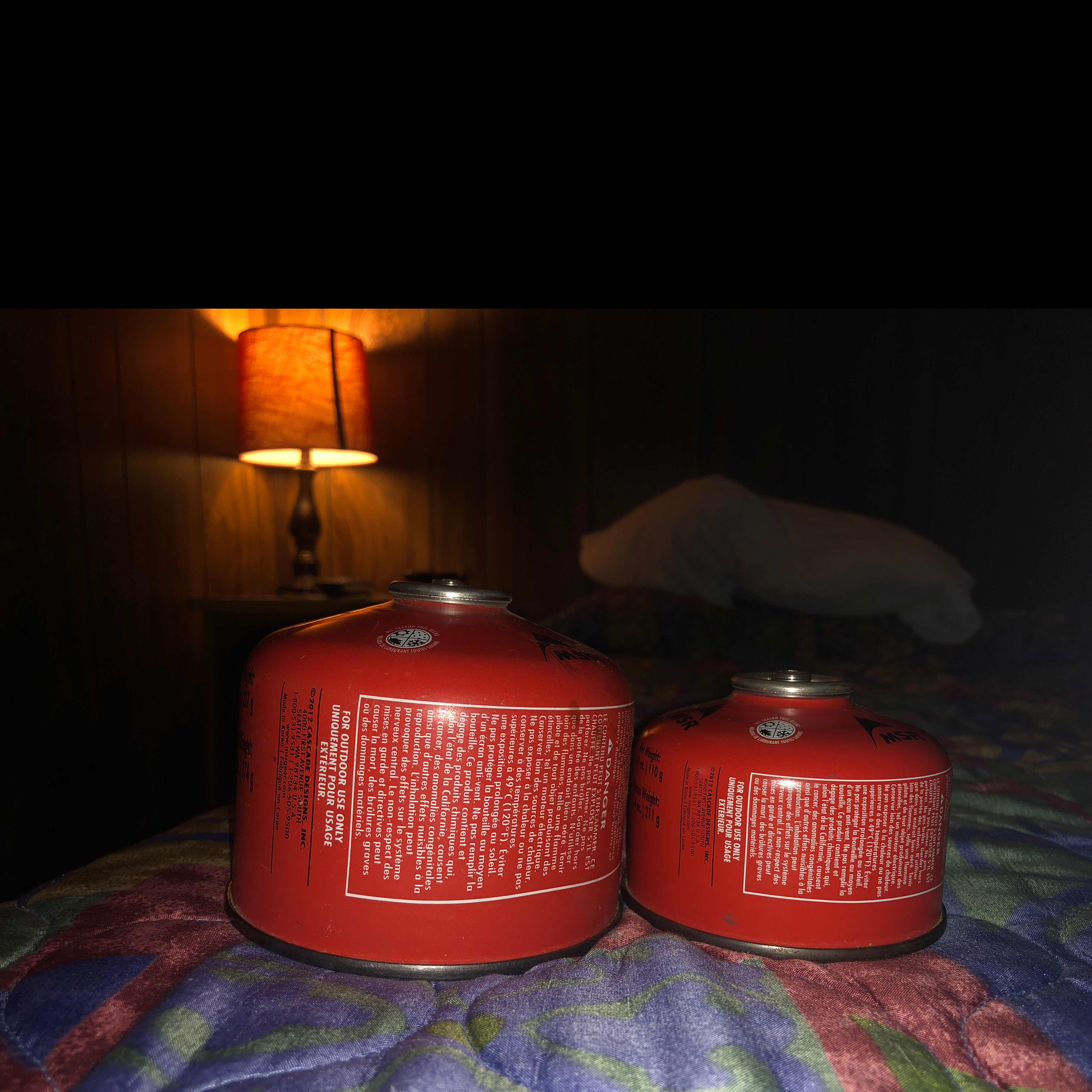 It’s soooo big
The remaining hours before dinner were spent agonizing over upcoming gear changes. I’m getting closer to Colorado every day. At the pace I’m going I’ll be there next week. We had low snow pack in the San Juan mountains this winter, but there will still be snow. I have to decide on if I need to carry an ice axe and other critical gear. 4 hours later and I still haven’t decided. I’m hoping to hear from people that are going through that section now, but so far nothing has been posted. Hopefully news will come out in the next few days.
Turtle, Mangus, and I decided to have dinner together. We walked to the edge of town to a restaurant called, El Bruno’s Restaurante y Cantina. The food was delicious and we got our margaritas! The people of Cuba, NM really know their Mexican food. Once again I failed to finish my meal. I can’t really blame my hiker hunger, the portions are just unreal. 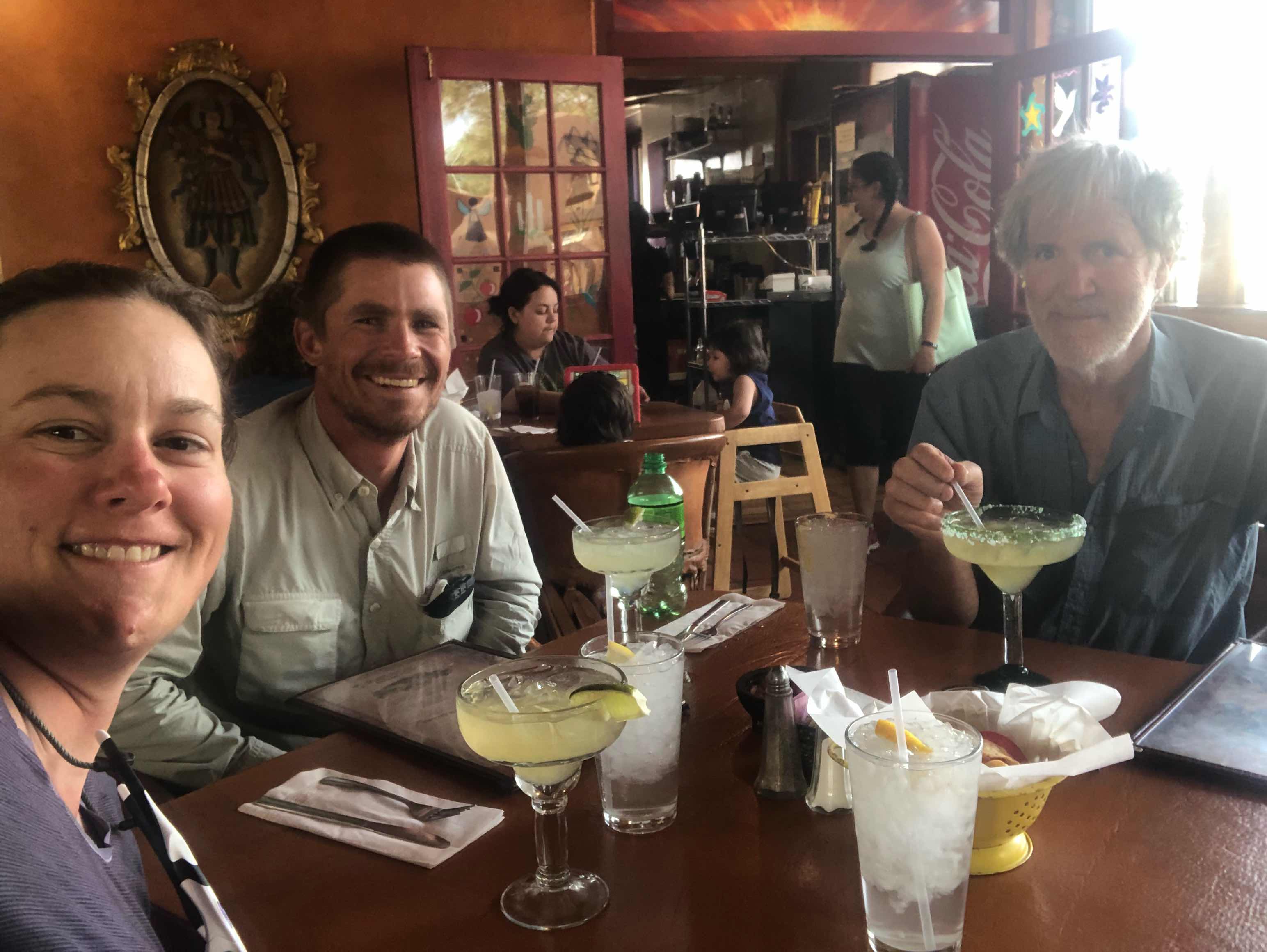 Happy hikers
I hope to get out of town early tomorrow morning. We have 3,000 feet of elevation to gain and I’d like to accomplish that while it is still nice and cool
out.
“The roots of all goodness lie in the soil of appreciation for goodness.”  -Dalai Lama