I was absolutely drained last night. I actually fell asleep while writing my blog. I woke up and finished it before falling immediately back to sleep. I still haven’t managed to sleep the whole night through. Most nights I wake up around 11:30-12:00 and think it is time to get up and start hiking. Last night I didn’t wake up until 2:30, so I guess that is progress. I usually wake up 2 hours before my alarm goes off. From then until I get up, I wake up every thirty minutes or so. I’m hoping that tonight will be better. I had another draining day and for the first time it is pretty warm out. I still haven’t put on my puffy and it is 9pm. Usually I have that bad boy on as soon as I start setting up camp.
I camped with Turtle last night and we were both up early. We managed to break camp and get on the trail by 6:30. We had about a 6 mile hike before our first water source. The miles were easy as we continued down a dirt road. Neither of us realized that the water source was a half a mile off trail and down in a canyon. It really didn’t bother me too much. Water sources on the Appalachian Trail were frequently off trail and down steep slopes. Turtle and Mangus kept adding that bonus mile into our daily total. I understand the urge to do that, but getting water off trail doesn’t put us any closer to Canada. I stand by my report of hiking 26.5 miles today, but in reality we did 27.5. I’m not sure how I would go about adding my offtrail bathroom breaks into the total. It is to confusing to keep track of the regular miles on this trail due to alternates to worry about also adding in offtrail miles hiked.  The water was well worth the walk. It was a beautiful piped spring located in an idyllic canyon. Mangus, who passed us early in the morning and was already there, said he didn’t even bother filtering it. I’m too nervous about my water sources to do that. I filter or treat my water 100% of the time. Since this was such a clear source I just added bleach. To make things even better the water was ice cold. It was still early morning and I was already warming up and sweating profusely. 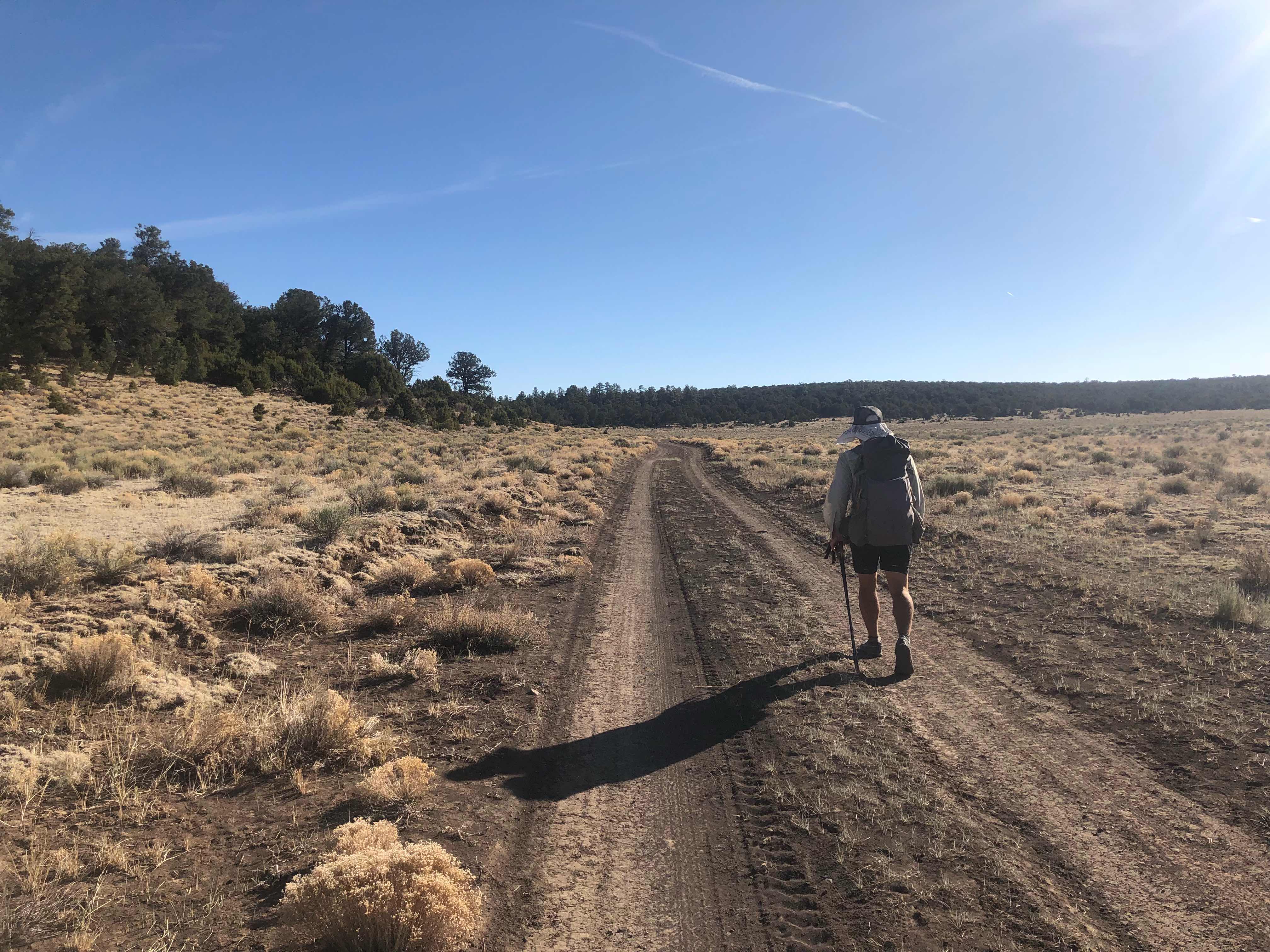 Dirt road/trail to start the day 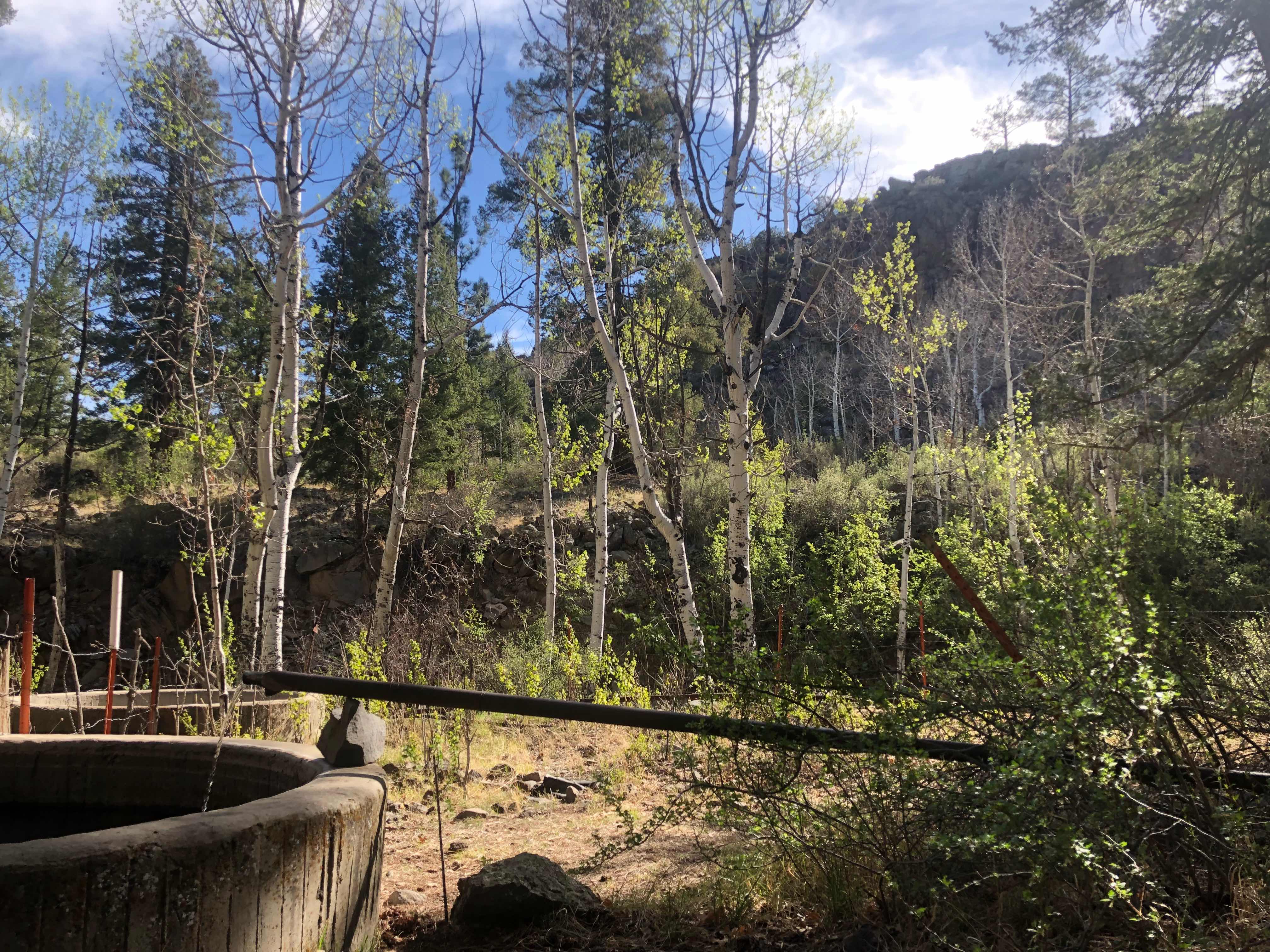 Piped spring
Our next water source was about 12 miles away. I knew that we had to drop about 2,500 feet of elevation right before the water. After water the rest of the day would be very exposed and little shade. I was actually dreading it. The day was blazing hot and I just sent home my hiking umbrella. Doh! I have only used it twice and really thought the exposed hiking days were behind me for awhile. That darn umbrella weighs 8 oz. I was fortunate that things turned out ok. Some clouds moved in and a little breeze persisted for most of the day. Plus, I’m getting super tan. The hands are already 3 times darker than the rest of my skin. I’m religiously putting on sunscreen several times a day. My arms almost have enough base tan that I can finally start hiking in my shirt sleeve shirt. I’m pretty excited about that. The trail was extremely well marked today and very easy to follow. We had real trail for most of the day, very few miles were spent on dirt roads. 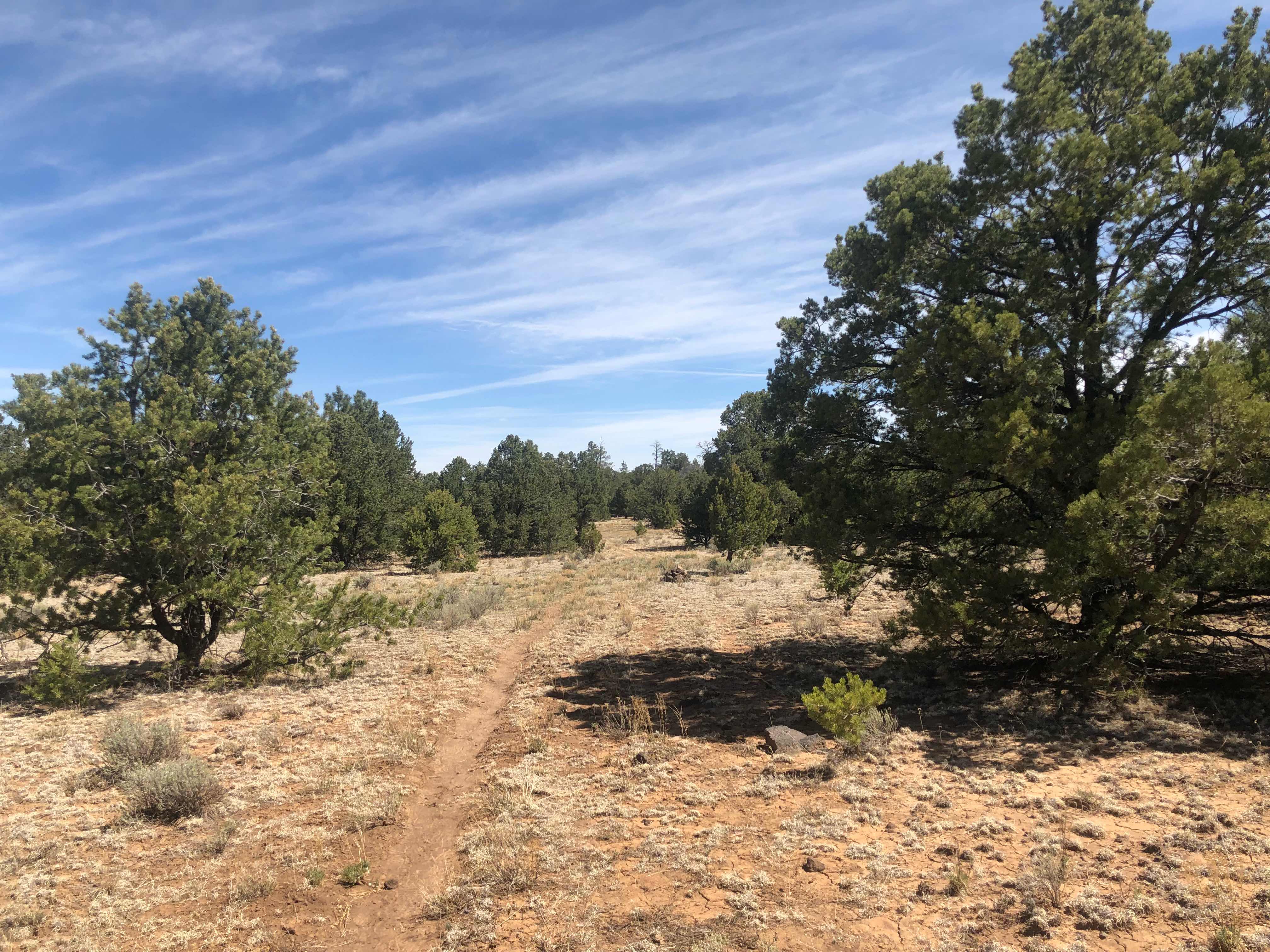 Enjoying the trees while they lasted
We took a few breaks in between water sources. I think we all knew it would be rough hiking after the last water source of the day. Our maps showed a lot of brown and tan, with no green which indicates a lack of trees and shade. Shortly after our first break we got an extraordinary view of what was in store. Since we were around 8,000 feet and had a clear line of sight I took a chance and turned my phone off of airplane mode. Bingo! I had service. I told Mangus and Turtle I would see them at the water source. It took about 20 minutes to upload my blog. I enjoyed the view and figured I would be way behind them. Once my blog loaded I checked my email and downloaded a weather report. I hiked as fast as possible because I wanted to see if I could catch up to them. I do really well when I have a challenge in front of me. I ended up catching them after about three miles. The challenge really made the miles go by quickly. We walked through a burn zone for a little bit and took a break in the last expected shade of the day. 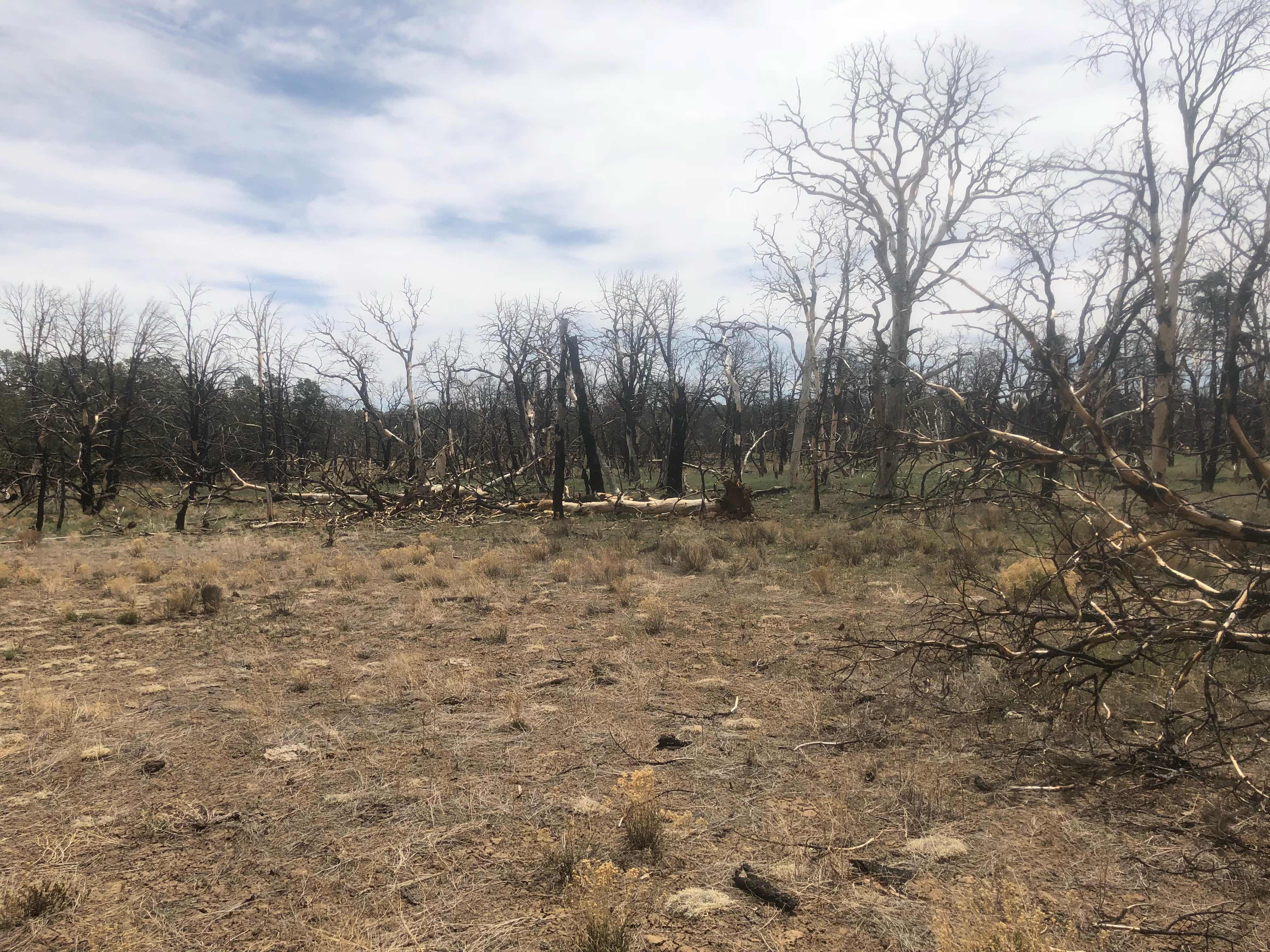 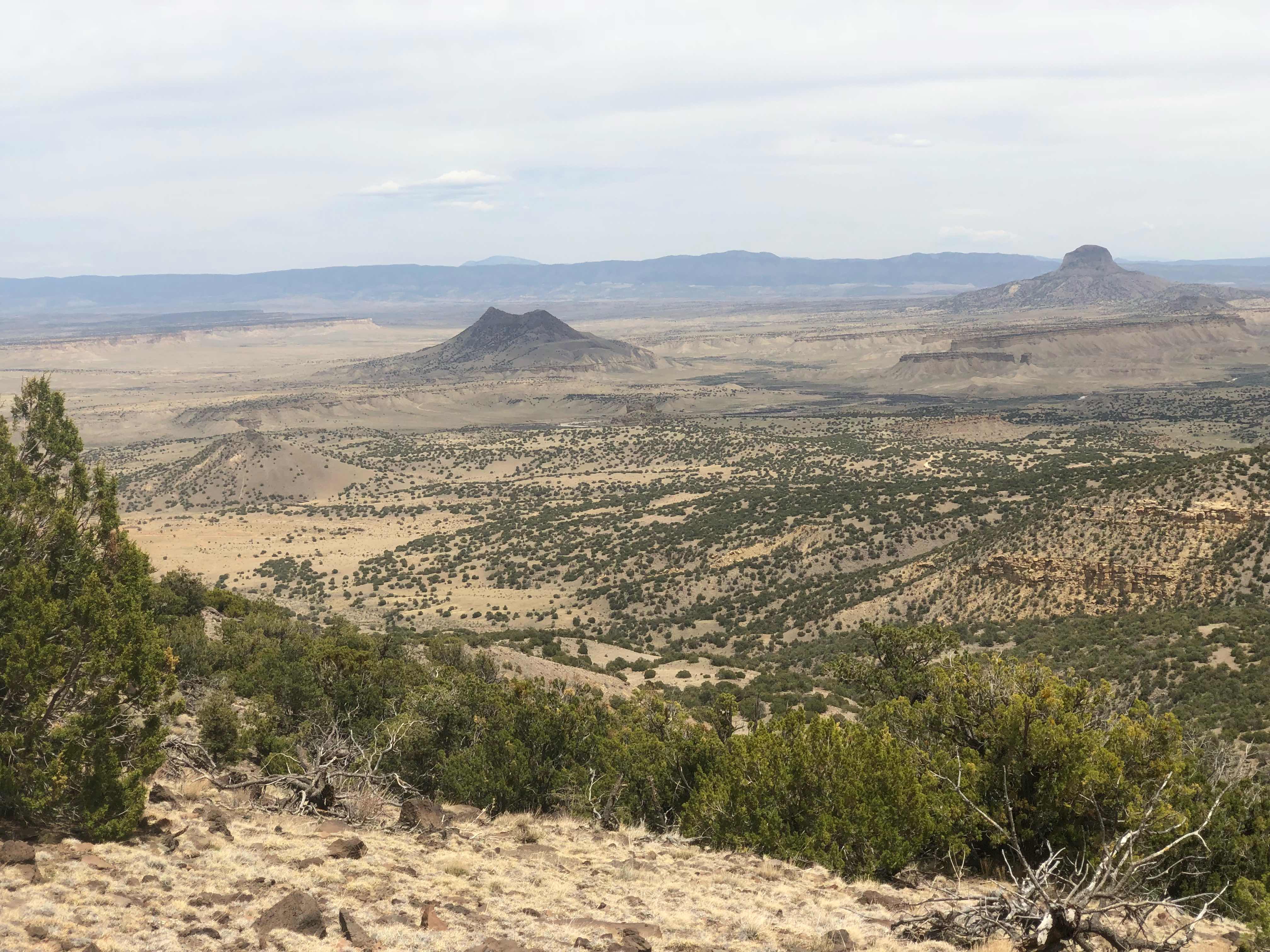 View from the top of a Mesa + cell service
The descent down to the bottom of the Mesa was really steep and long. I really struggle during this type of hiking. I’m slow going downhill. Some times I feel like molasses would run downhill faster than me. I told Mangus to go ahead of me because I would slow him down. He stated that he also wanted to go slow, so it was no big deal. Within 15 yards he saw just how slow I am and asked if he could pass me. I let him go by and struggled along for a little while longer. Eventually I just stopped and watched what he was doing. By watching him I discovered that by using my trekking poles on the descent I was just making things worse for myself. I finally saw a better way to do it. Within half a mile I caught up to him. To say that he was surprised to see me right behind him would be an understatement. He said something to the effect of, “wow what did you do. I thought you would be an hour behind me.” I told him I watched him and learned a better way. Apparently you can teach an old dog new tricks. This will definitely up my hiking skills. Thanks Mangus! 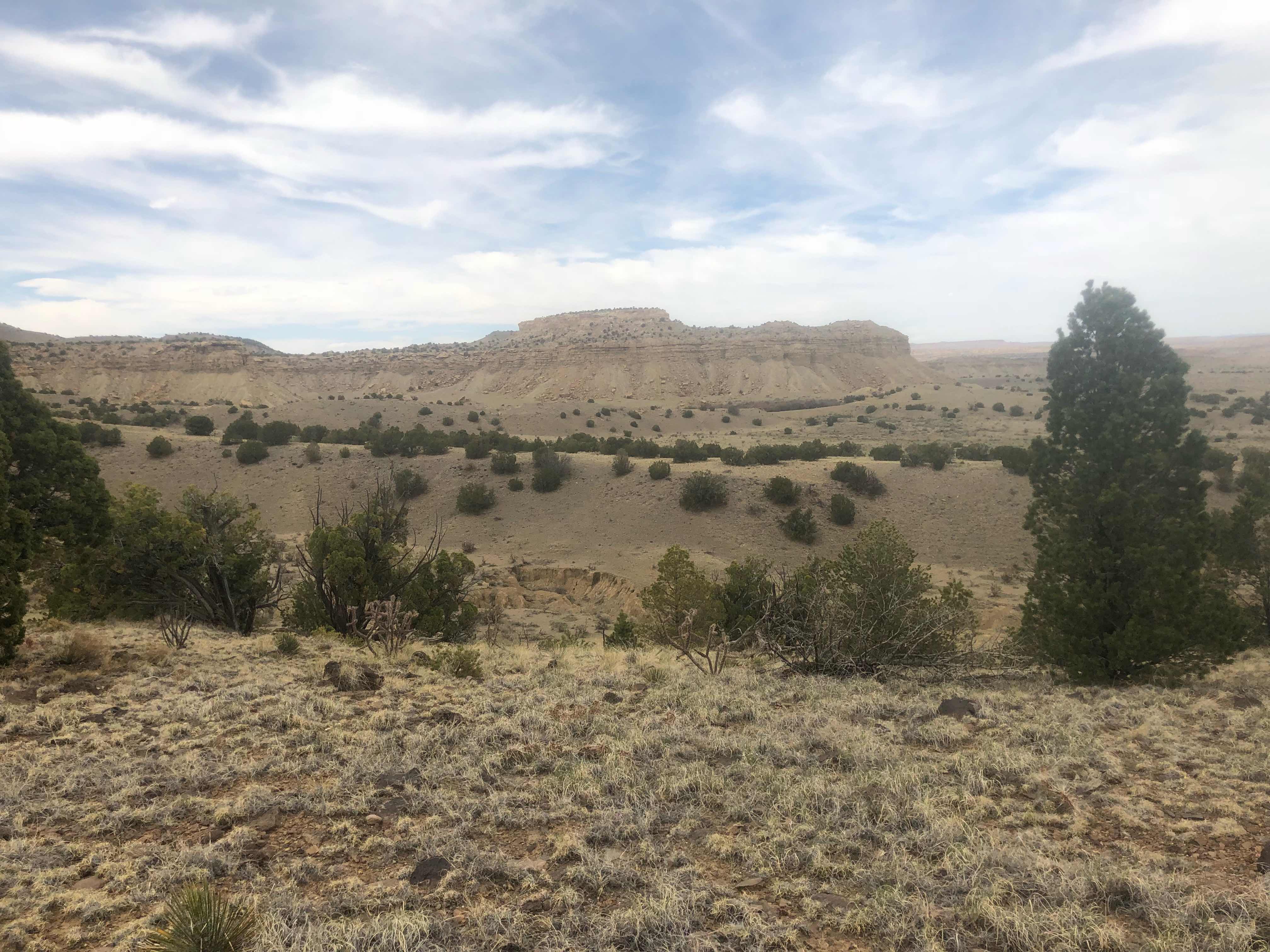 View on the way down 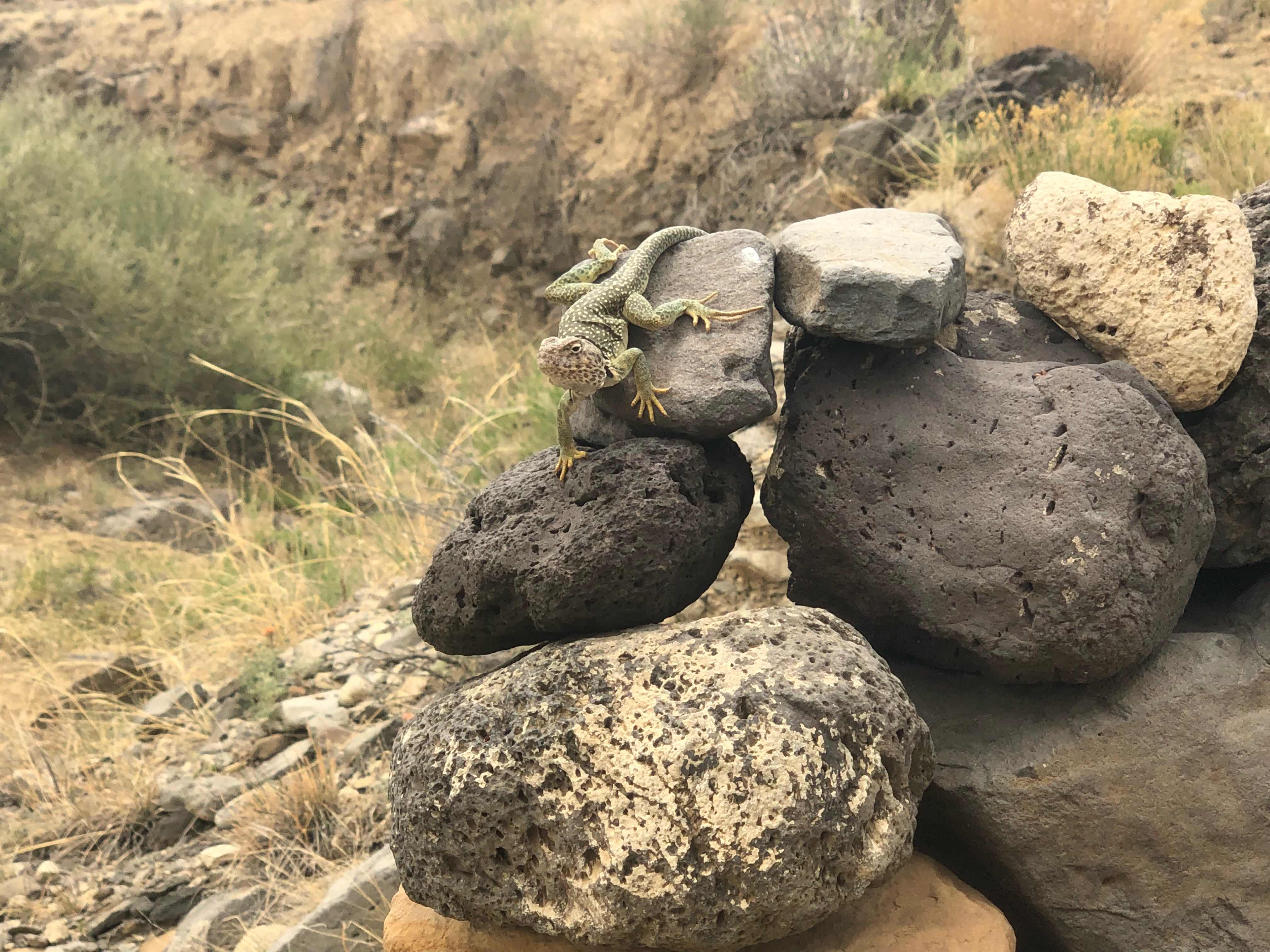 Super awesome lizard posing for me
As we dropped in elevation the heat really increased. It was like someone opened the door to an oven. The only saving grace was the light cloud cover and breeze. I was drinking twice as much water as normal. While we were hiking to the water we were passed by another group. I’m pretty proud of my 11lb baseweight and small pack, but this group took it to a whole new level. If I had to guess I would say that their packs were around 7-8 pounds without food and water. We had a chance to chat at the water source. It turns out they are shooting for a calendar year triple crown. I guess just thruhiking a trail isn’t hard enough anymore. It seems more and more people are attempting to hike all three trails in one year now. I know of 6 people alone that are trying this year. We chatted briefly before they pushed on. Turtle and I were hoping to hike another 7 miles and Mangus was hoping for another 5. We parted ways at the water and hope to see each other in the morning. I really thought this part of the day would be terrible. It ended up being fantastic. The views were what I expected all of New Mexico to look like. Even though I was exhausted I was able to push on. I can’t wait to see what tomorrow will look like. 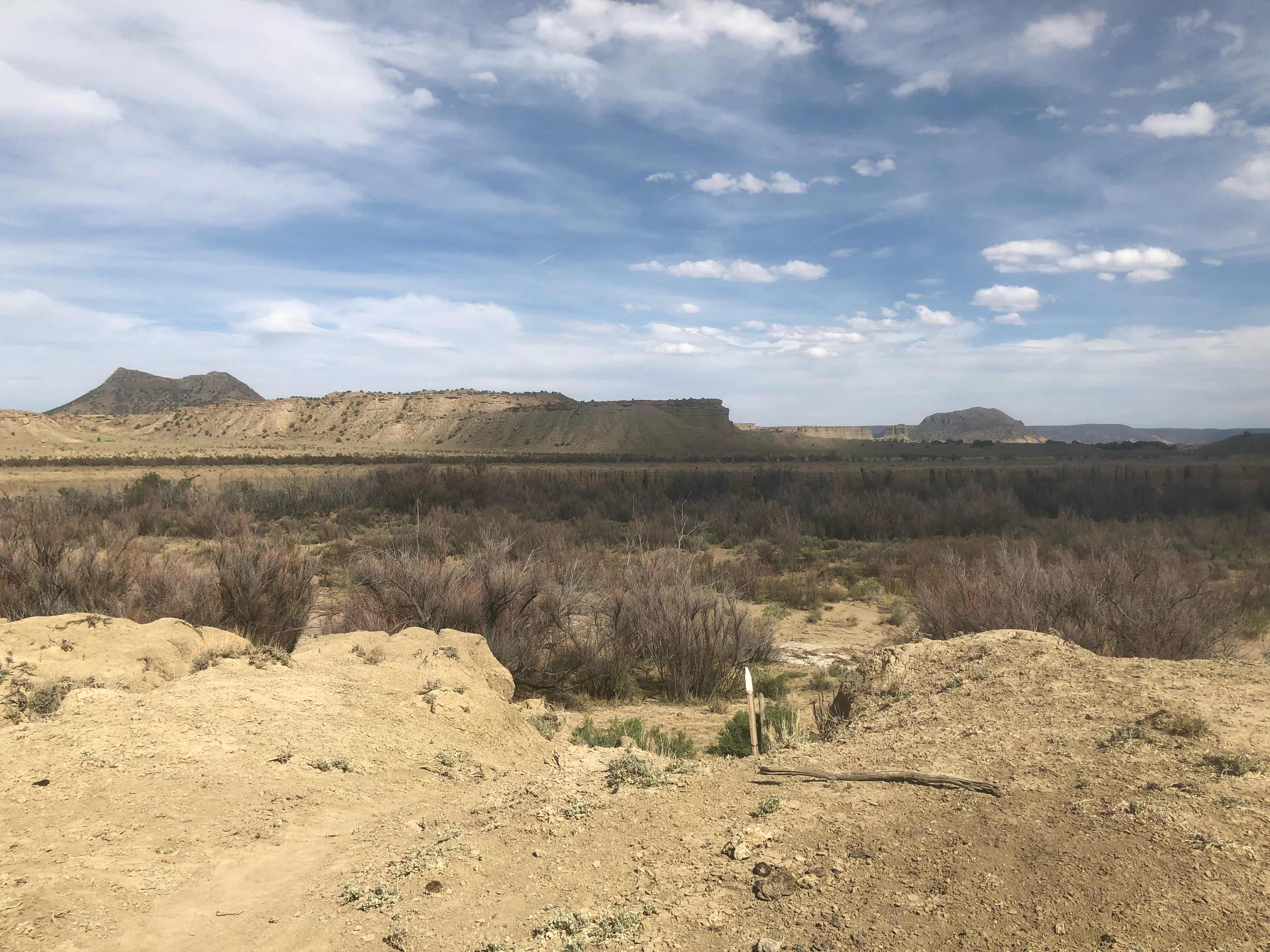 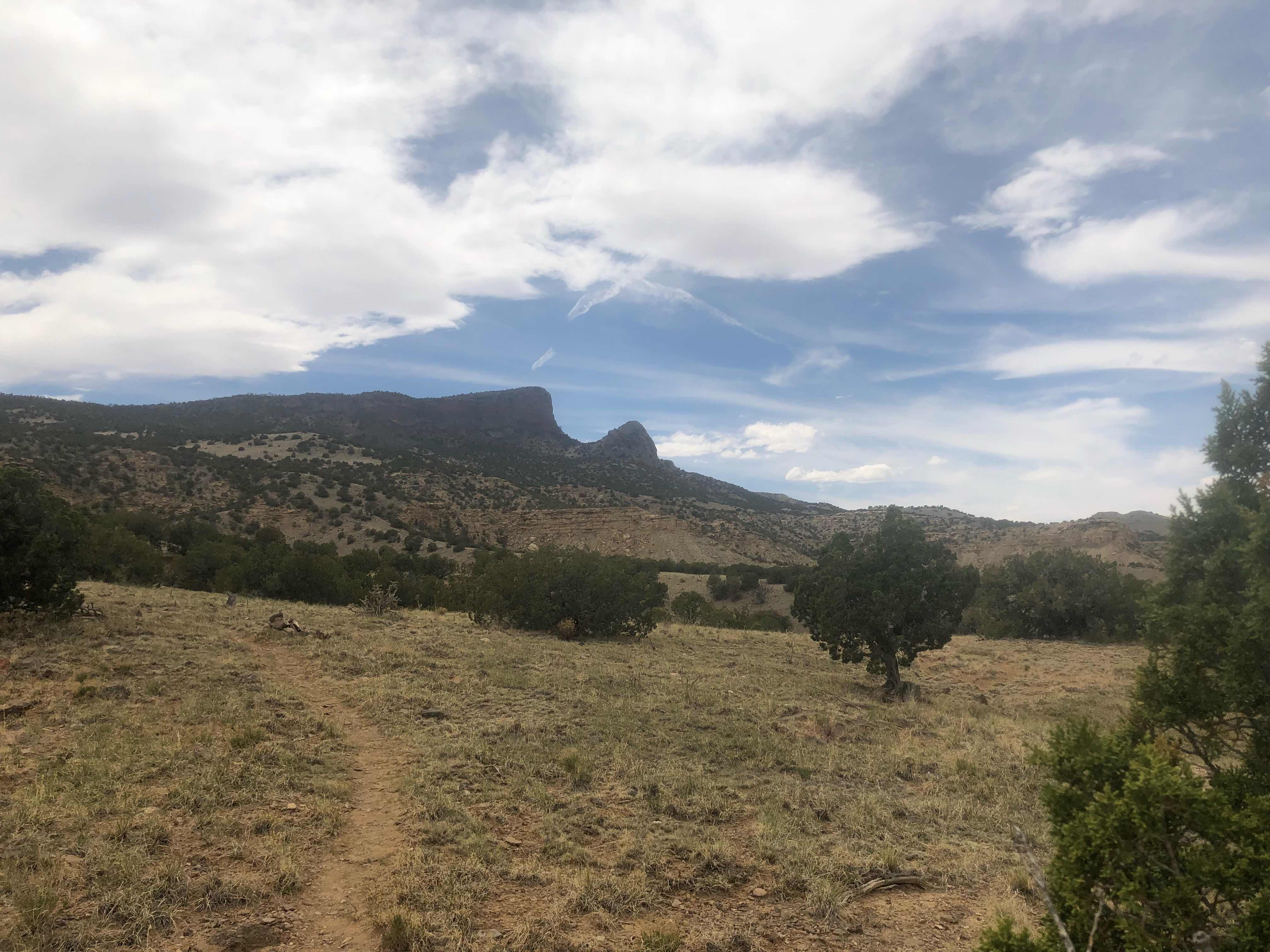 Sorry about the how blurry this looks. I think my lense is coated in dust 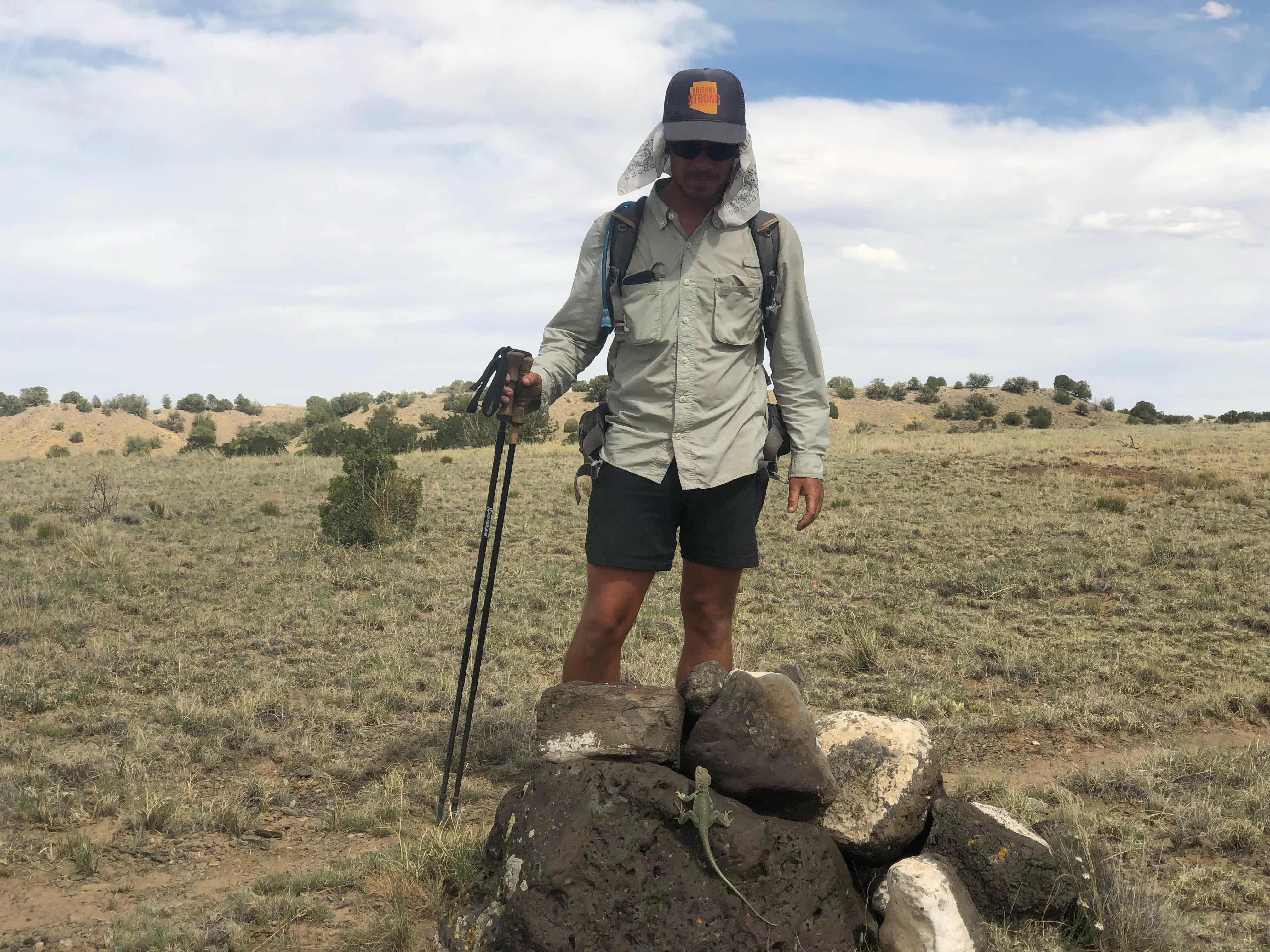 Turtle having a staring contest with the cool lizard
We stopped half a mile short of our goal for two reasons. First reason being trying to find good camp spots that are out of the wind in this terrain is difficult. The second reason was because we found an awesome spot on top of a Mesa with a great view facing east. We should have a great sunrise and we don’t have to climb a 11,307 foot mountain before the sunrises to see it. 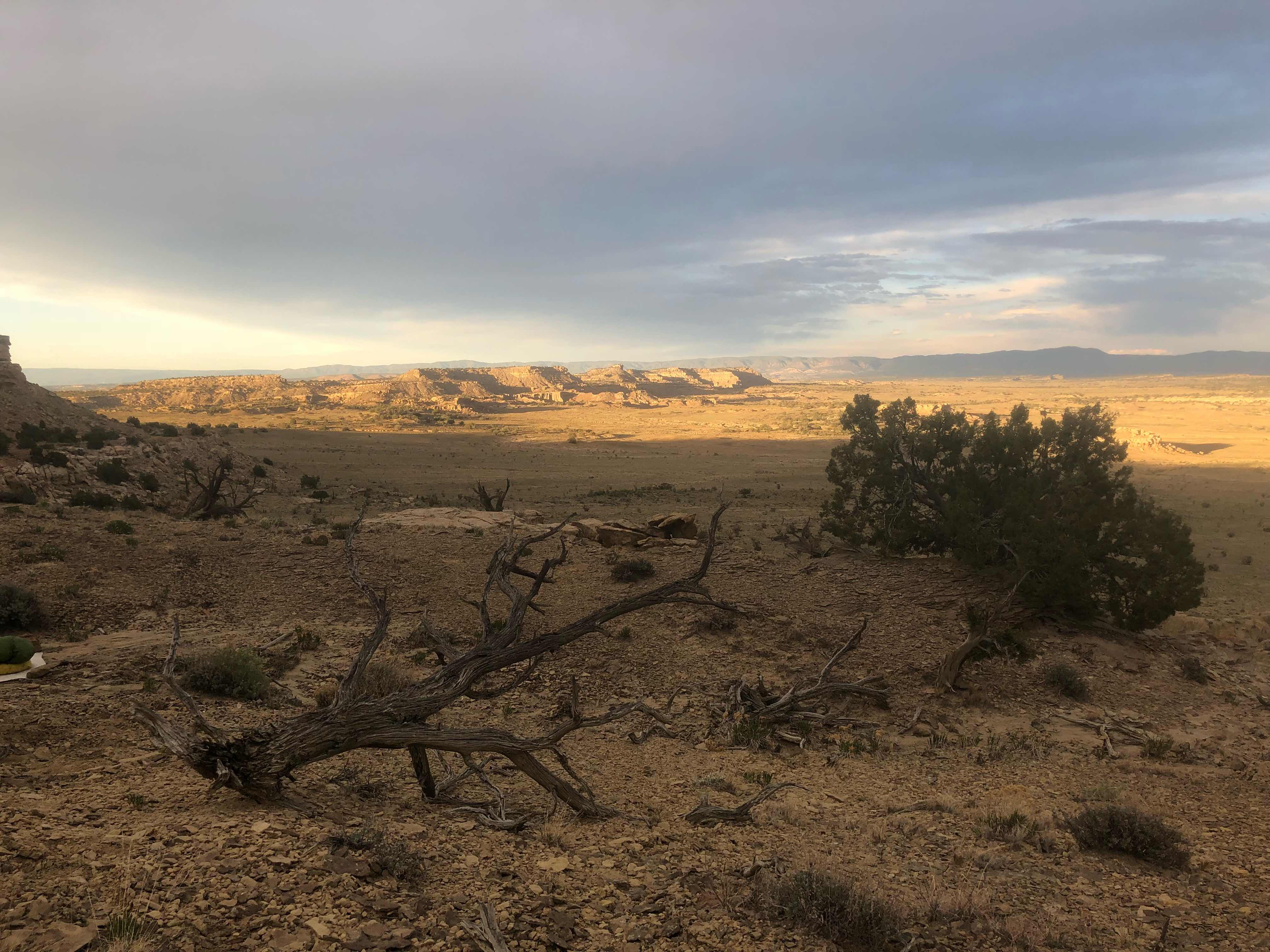 View from camp during dinner 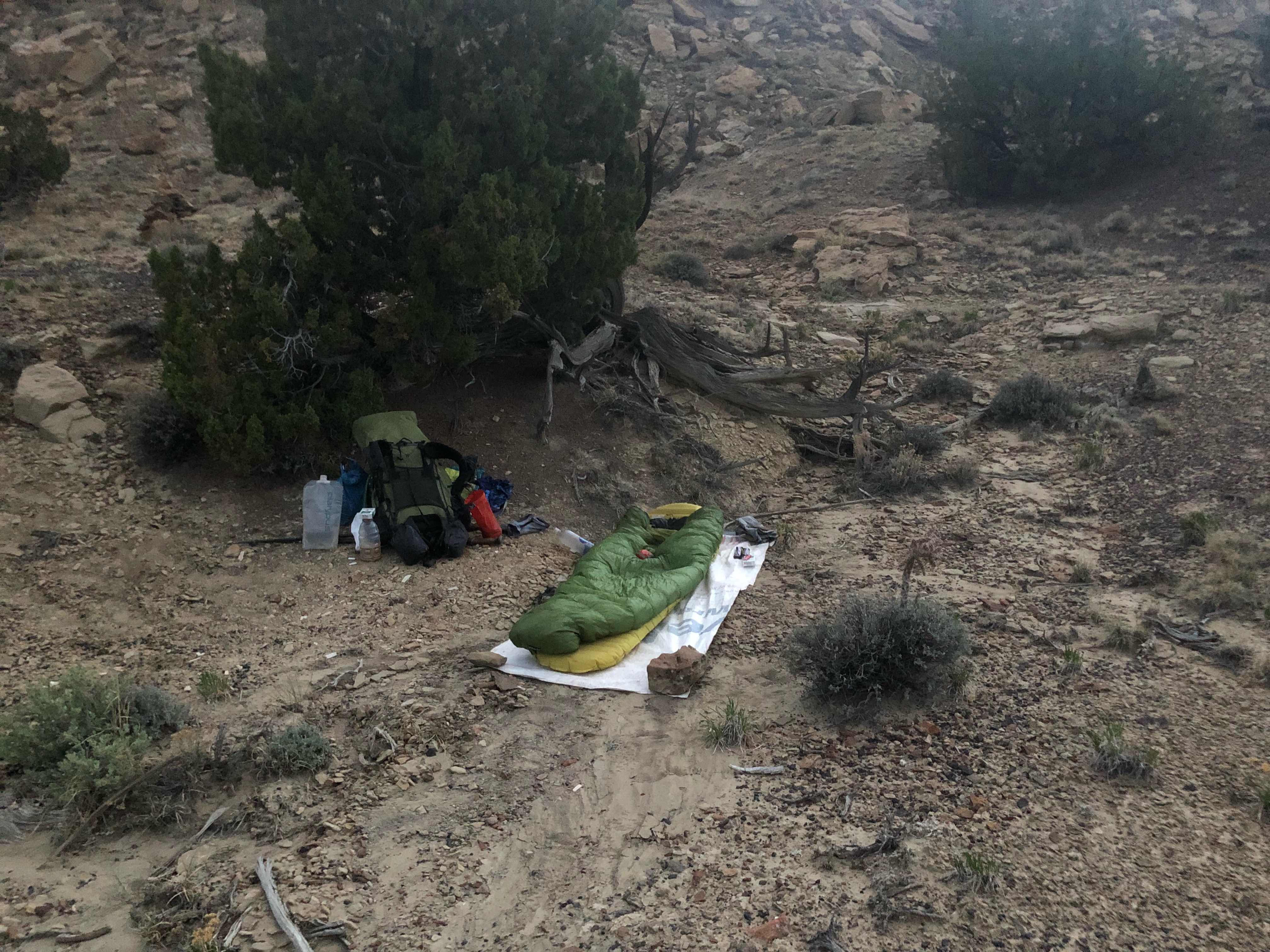 My spot for the night
“To have faith doesn't mean you get any less frustrated when you don't do your best, but you know that it's not life and death. Take what you're given, and when you continue to work hard, you will see results. That will give you the confidence you need to keep going.”
- Tom Lehman