So today was another great day in Medicine Bow National Forest. If you like postholing for mile after mile, followed by mile after mile of walking through forests with trees down everywhere, and huge thunderstorms then this would have been your kind of day. Turtle and I didn’t even bother setting an alarm this morning. We decided to start hiking whenever we woke up. We were both up and moving around 5:30. The days are getting really long. There was enough light to wake me up at 5:30 and it didn’t get full dark until almost 9 pm. We postholed for about 5 more miles. At one point we had to stop because my feet were so cold I was nervous there would be permanent damage. I’ve never felt pain like that before. It was crazy. We didn’t get out of the snow until Deep Jack Trailhead. That is significant because we were originally supposed to start our flip there yesterday. 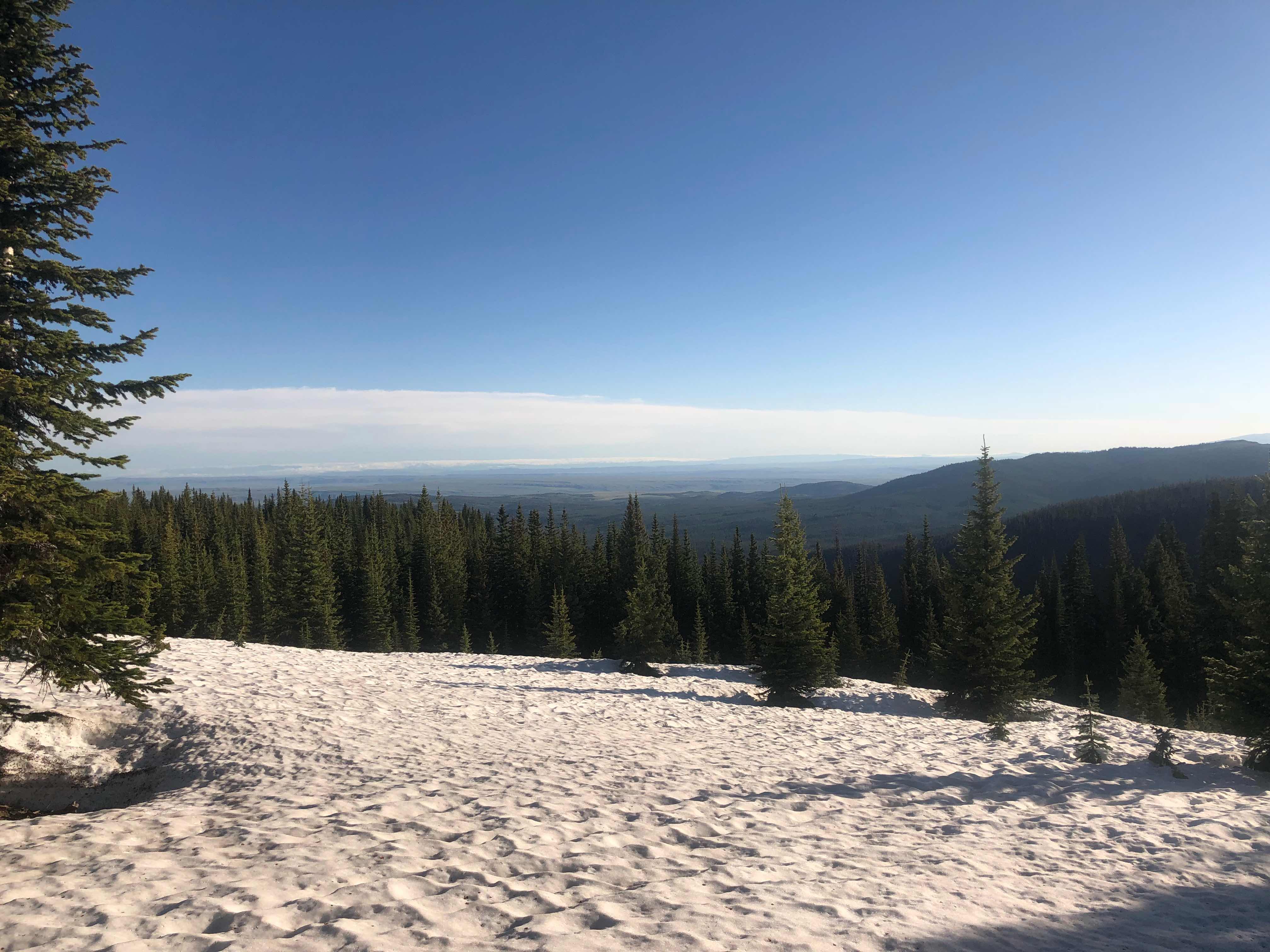 Snow as far as the eye can see 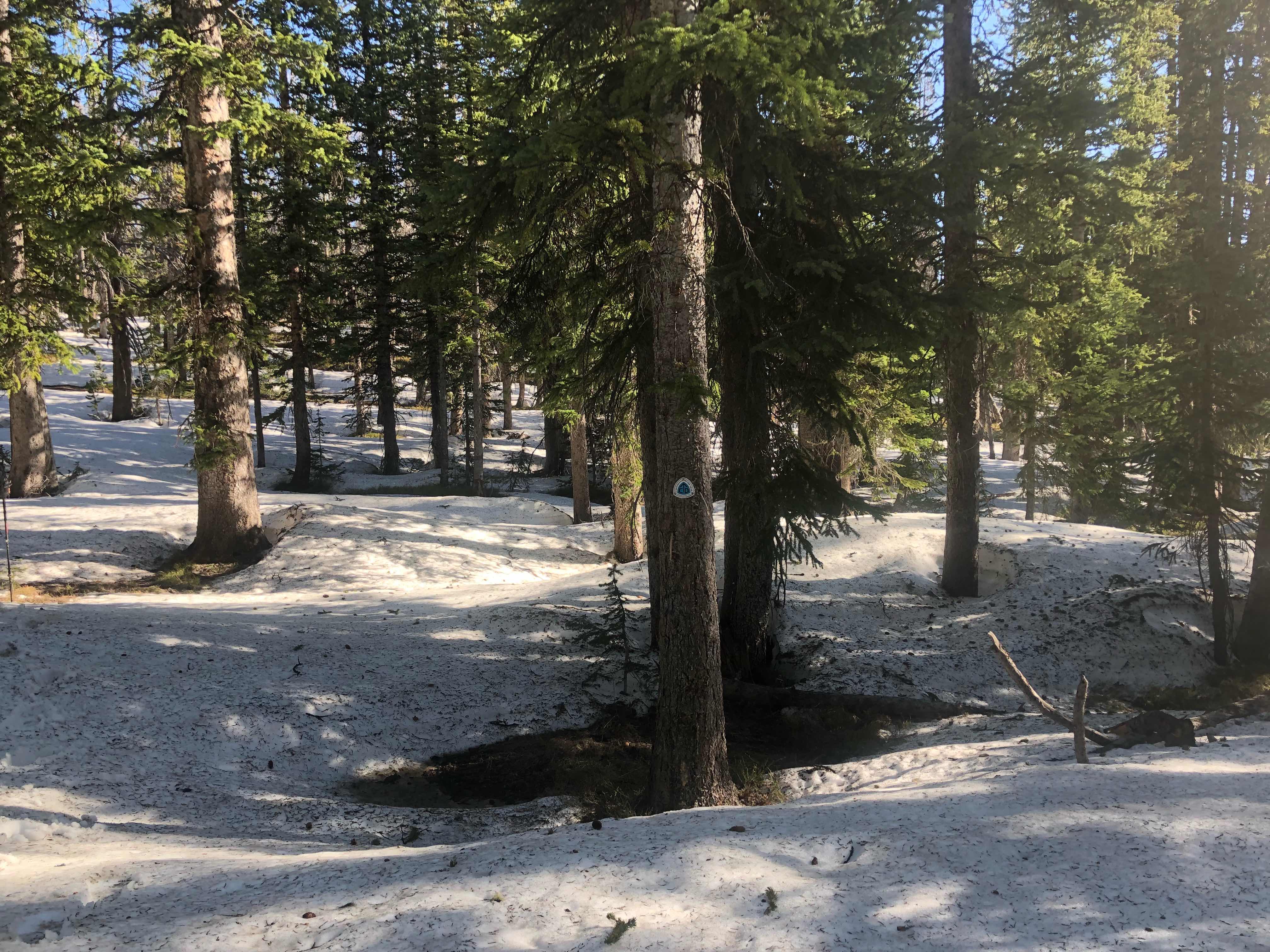 Nice to know that we were on trail 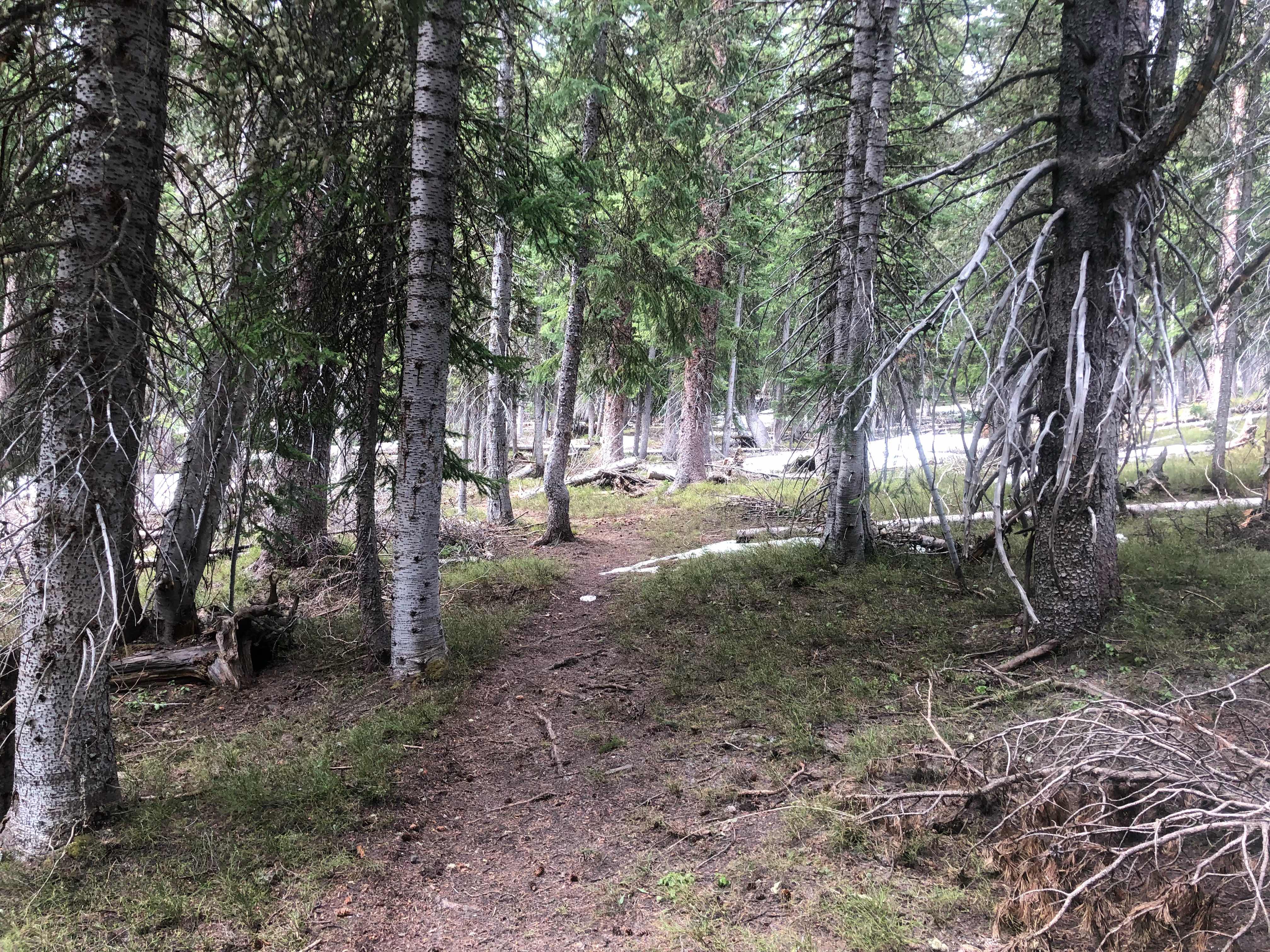 Finally out of the snow
The last mile of snow was probably the worst. The area it covered was full of downed trees. Every time I fell through the snow I was terrified about what lay below. It would have been really easy to break an ankle or leg. Luckily we made it through unscathed. We were both ecstatic to finally reach unblemished trail. The ecstasy only lasted a few moments. We entered into a new type of frustration, blow downs. Every time we would hit our stride we would come across a tree fallen across the trail. Don’t get me wrong, it was much better than the area we had left behind. Just as we cleared a major area of downed trees it began to drizzle. We could hear thunder from all directions and the sky looked ominous. The rain never got to the drenching stage. It was more of a heavy drizzle. We went in and out of the downed trees. 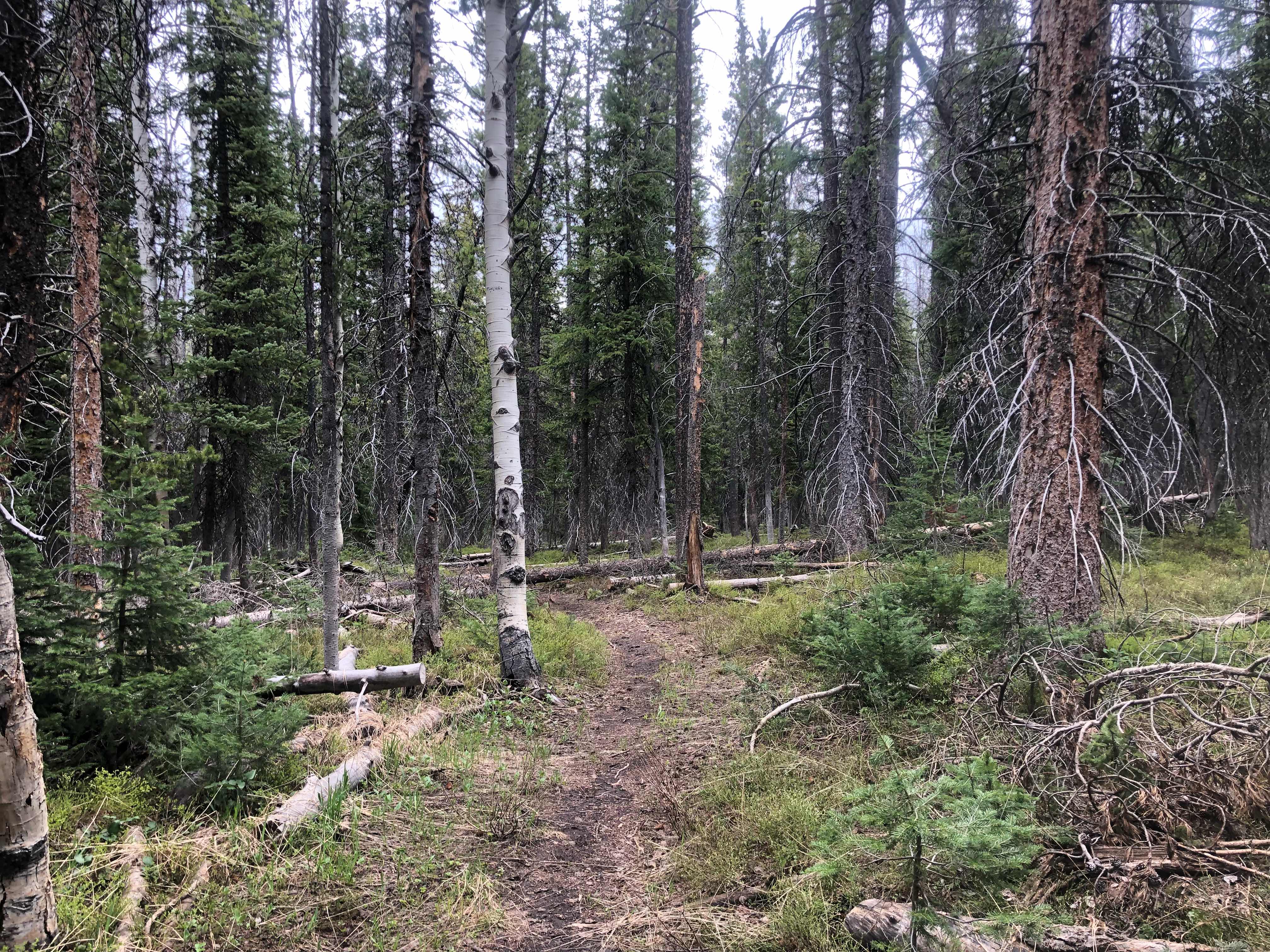 The only picture of the area I took due to the rain
Once the rain stopped we came out into the open for awhile. We crossed numerous dirt roads and the trail was relatively difficult to find at times. We passed by some amazing areas where the wildflowers were out on display. They were mixed in among sage bushes. Even though the trail was hard to find this was my favorite part of the day. 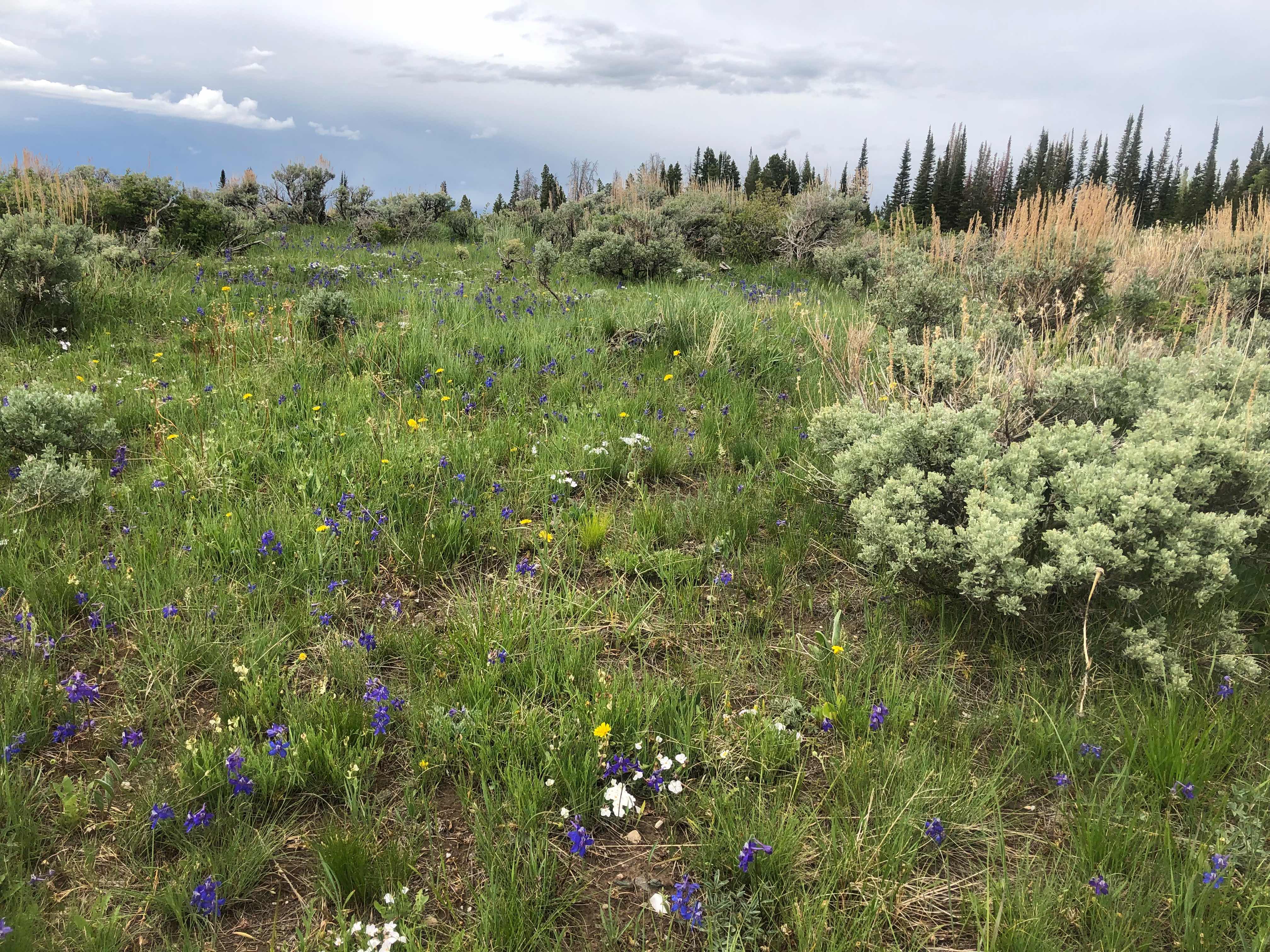 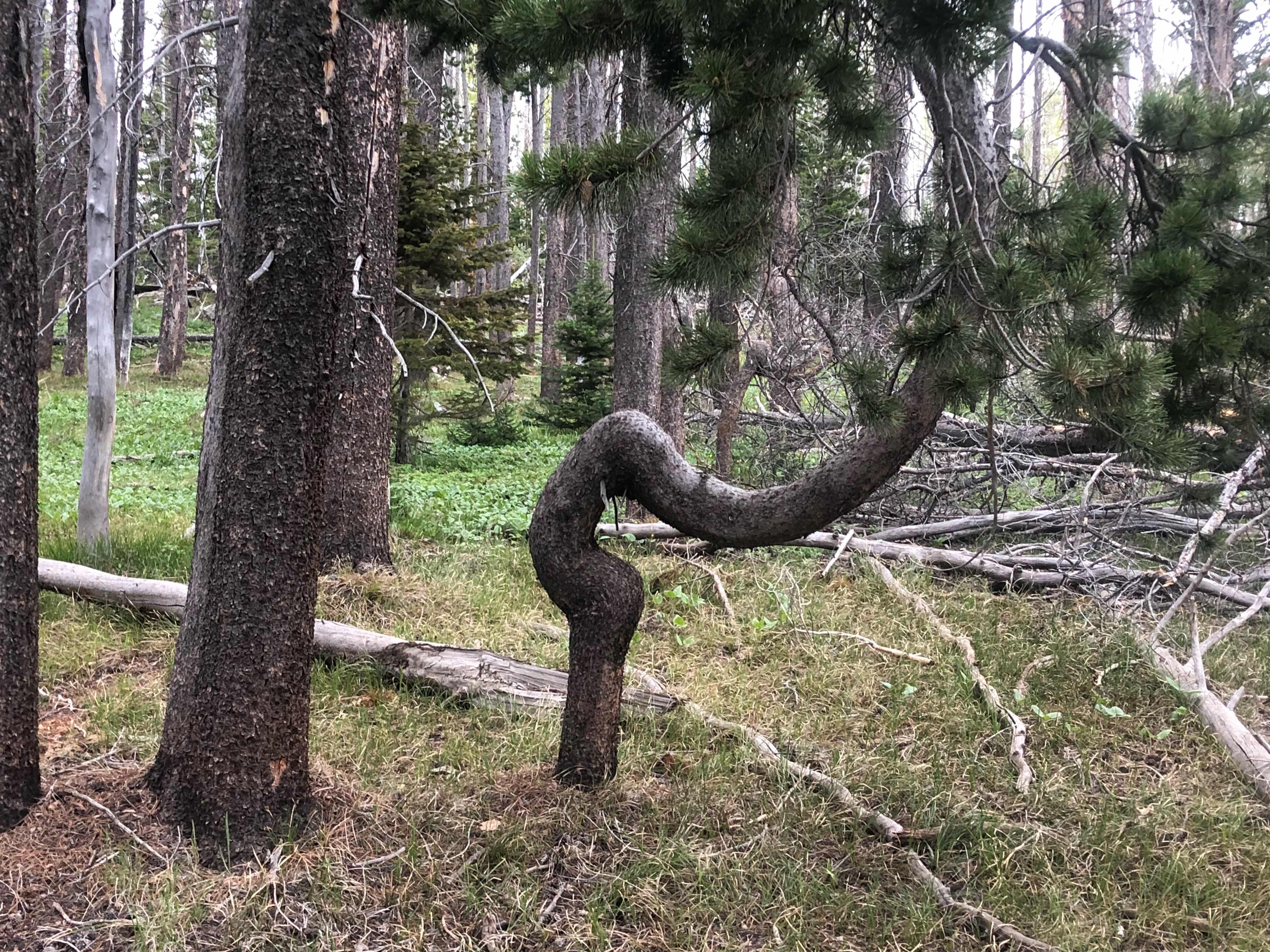 Crazy tree created long ago by the Ute Indians. Thanks for the info on these trees Jo Lynne Spalletta 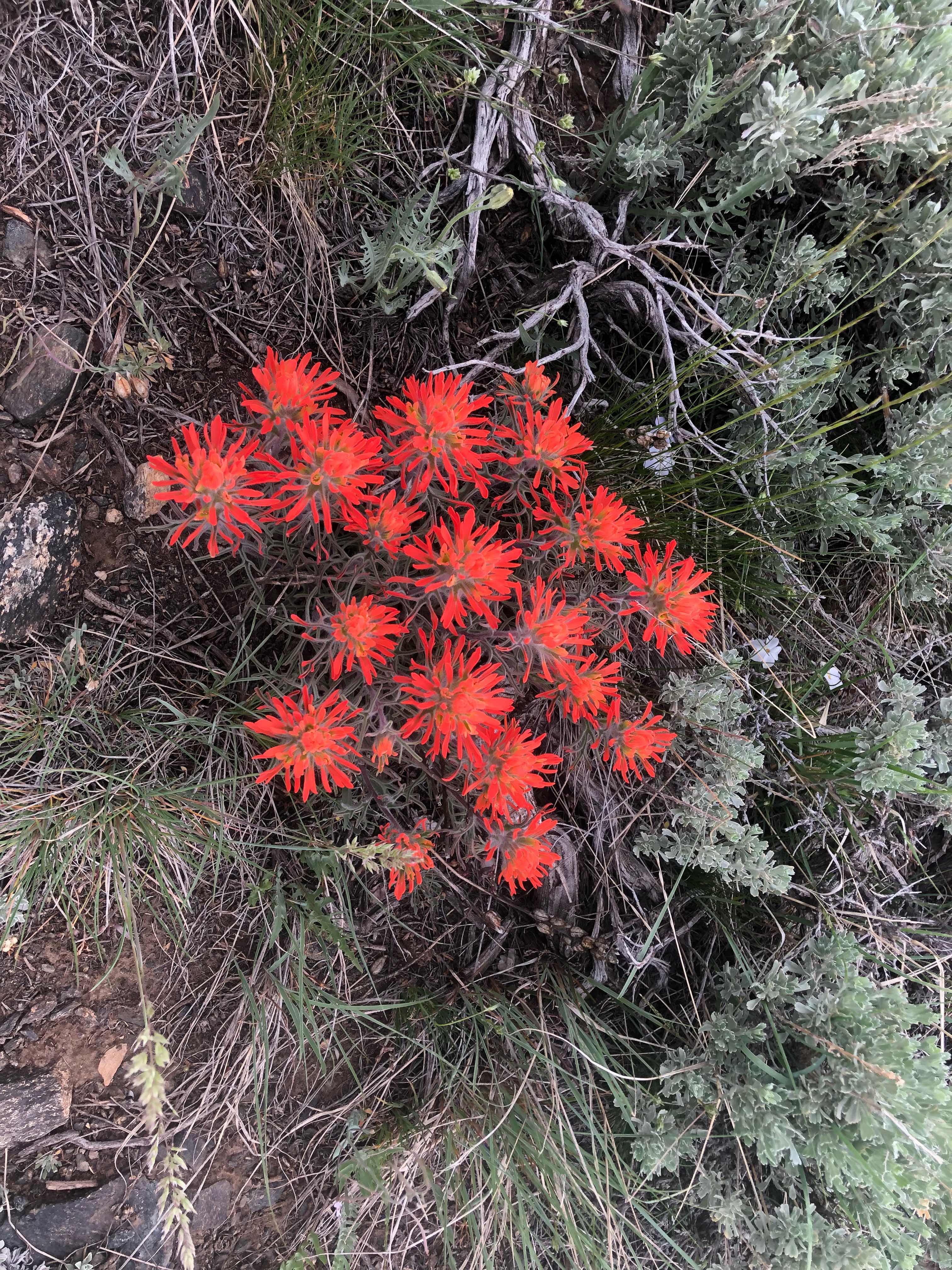 Can anyone tell me what these are? They were my favorite today 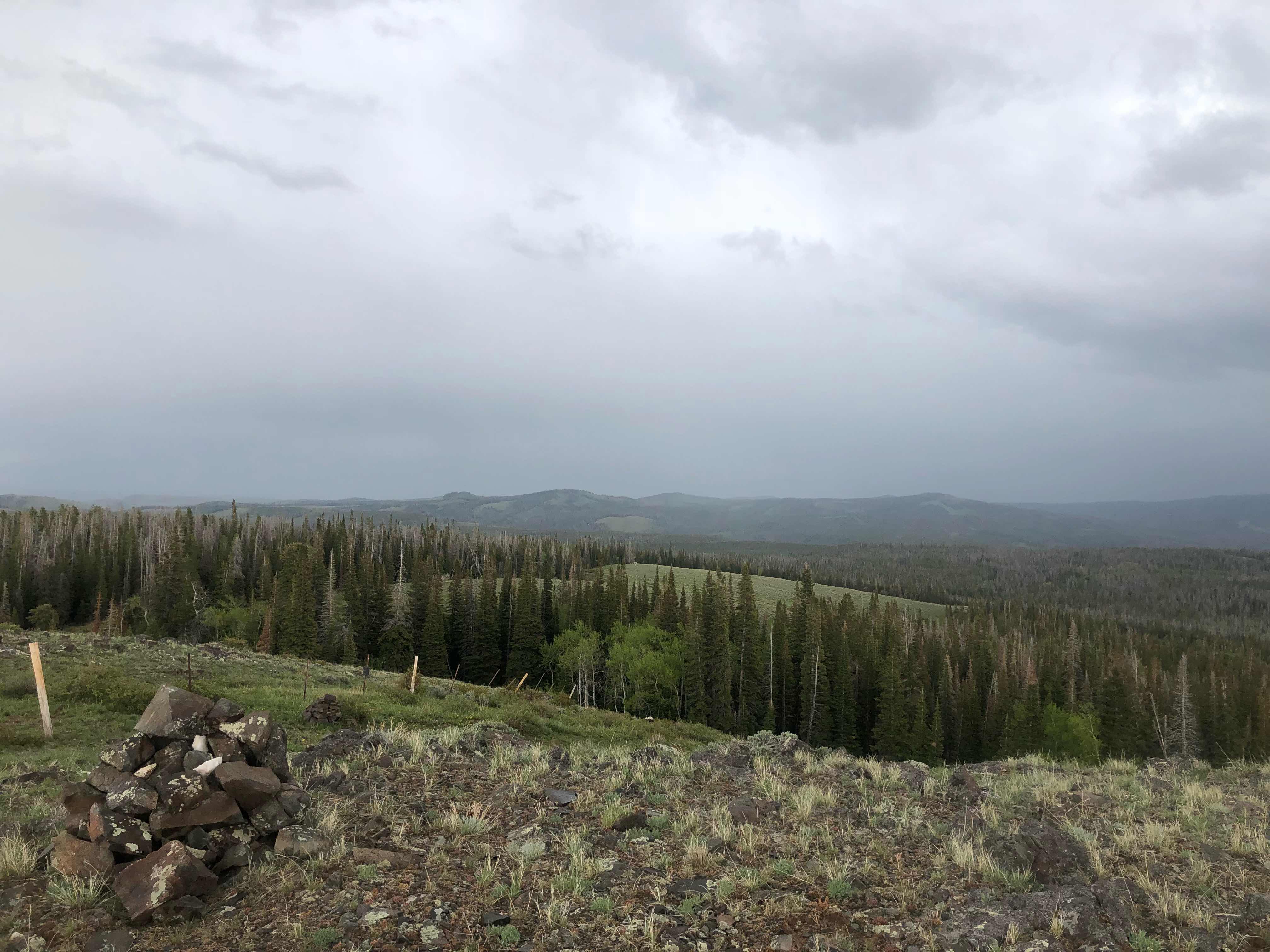 Clearing skies?
After the wildflower section the trail did a very AT thing. We could have followed the mountain ridge at a low elevation, but instead we climbed 4 different peaks before dropping back to almost where we started from. The peaks had good views, but the trail design was suspect in my opinion. 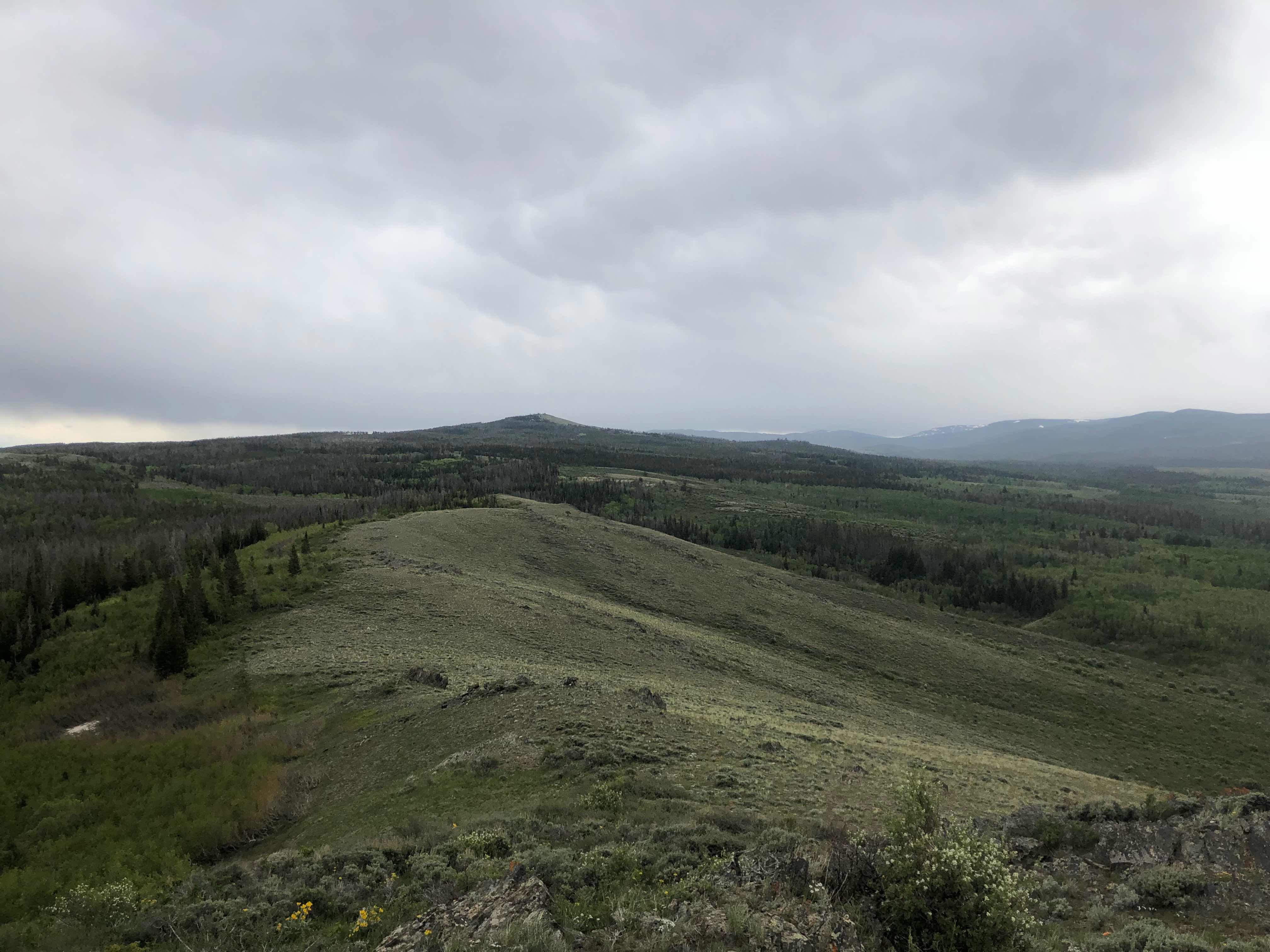 Four random peaks we climbed
After the PUD’s(pointless up and downs) we descended sharply onto a dirt road. We have officially finished with Medicine Bow Wilderness and I believe we are on the cusp of the Great Divide Basin. I say cusp because I don’t think it has actually started yet. Almost as soon as we started down the road the skies opened up and unleashed hell upon us. Luckily, we had dropped down to 8,000 feet in elevation, but in no time I was soaked and freezing. The last few miles of the day were not happy miles. Stopping to set up camp at the end of a long, tiring, and difficult day soaked to the bone is not fun. You would have thought I would be an expert at this after the Appalachian Trail, but that seems like such a distant memory. Turtle and I stopped to grab some water from a nearby stream and even that little task seemed torturous in the rain. The saving grace was that just before we stopped for the night the rain quit. I was able to get setup and keep most of my gear dry. I’m really hoping for a better day tomorrow. I didn’t expect my first two days of this leg to start off like this. 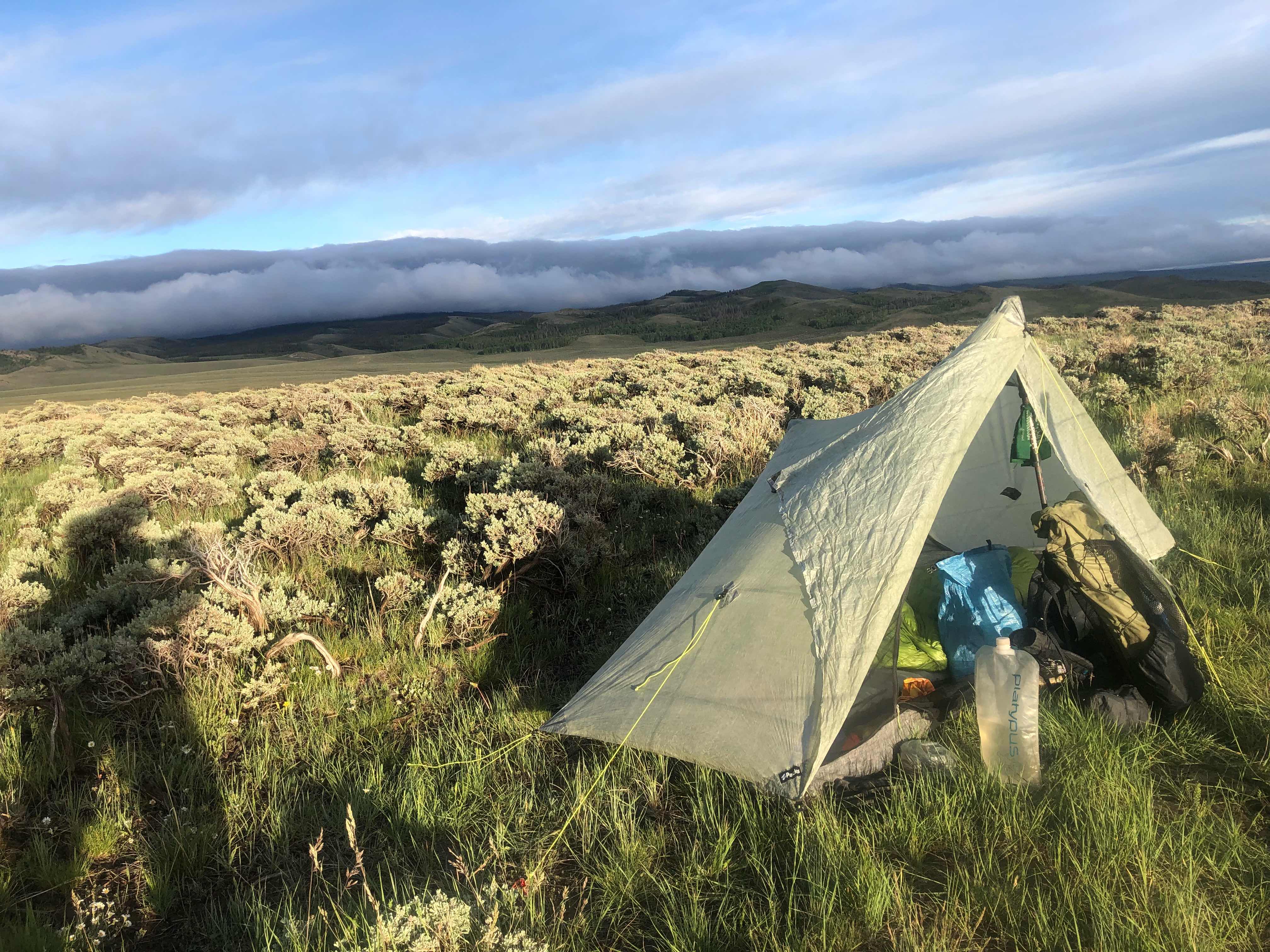 Camped amongst the sage. Crazy storm clouds in the distance
"And once the storm is over, you won't remember how you made it through, how you managed to survive. You won't even be sure whether the storm is really over. But one thing is certain. When you come out of the storm, you won't be the same person who walked in. That's what this storm's all about."
―Haruki Murakami