It was incredibly hot this morning when I woke up. Just kidding, it was still cold, but slightly warmer than it has been. I really wanted to get an earlier start, but it takes me longer to pack up in the mornings when it is so cold. I was beyond excited to finish New Mexico and begin the Colorado section of my hike. I was on trail by 6:30 and hoped to cross into Colorado by 9-9:30. The trail started of with a gentle climb of about 500 feet. It was the perfect start to my morning. Just the right amount of work to warm me right up. I finally  forced myself to leave camp without all of my layers on. It is so hard to start off the day freezing, but I know I’ll have to stop within 15 minutes and take clothes off. It is better to start with the bare minimum on. I wish it had been smooth sailing all the way to the border, but New Mexico wanted to thumb her nose at me one last time. 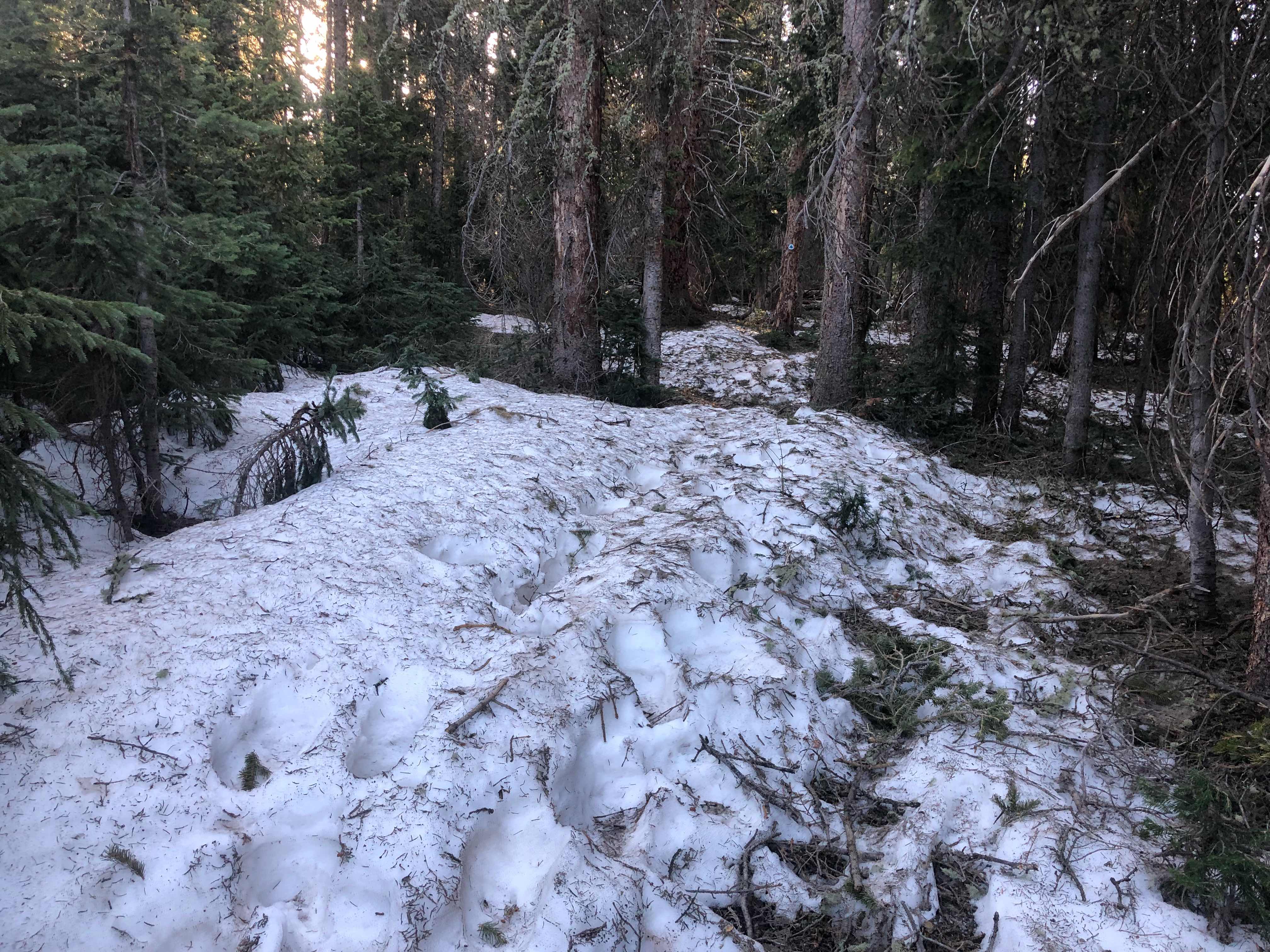 2 feet of snowpack
For the next 5 miles I walked through a snowy, muddy, downed tree infested forest. It wasn’t dangerous, but very time consuming. On a typical snow year this section would have been much worse. This year it was just slow going. I really took my time in the muddy and sloppy parts in hopes of keeping my socks dry. I only hike with 2 pairs of socks and today was clean sock day. I expected the snow to still be solid since it was still early, but some sections weren’t. This meant I was postholing(breaking through the crust of snow, like digging a hole for a post in the ground), but it wasn’t horrible. Most steps stayed on top of the snow or I was able to step in other peoples tracks through the snow. Postholing can be dangerous because you don’t know what is underneath the snow, but most of the time it is just exhausting and time consuming. Don’t forget about all the downed trees. That cost me more time and energy. I sure hope Colorado is more kind to me, but I think days like this will be my new reality for awhile. I did get to hike on a dirt road for awhile. This spared me from all of the time consuming hiking of earlier. I was able to cruise for a few miles. 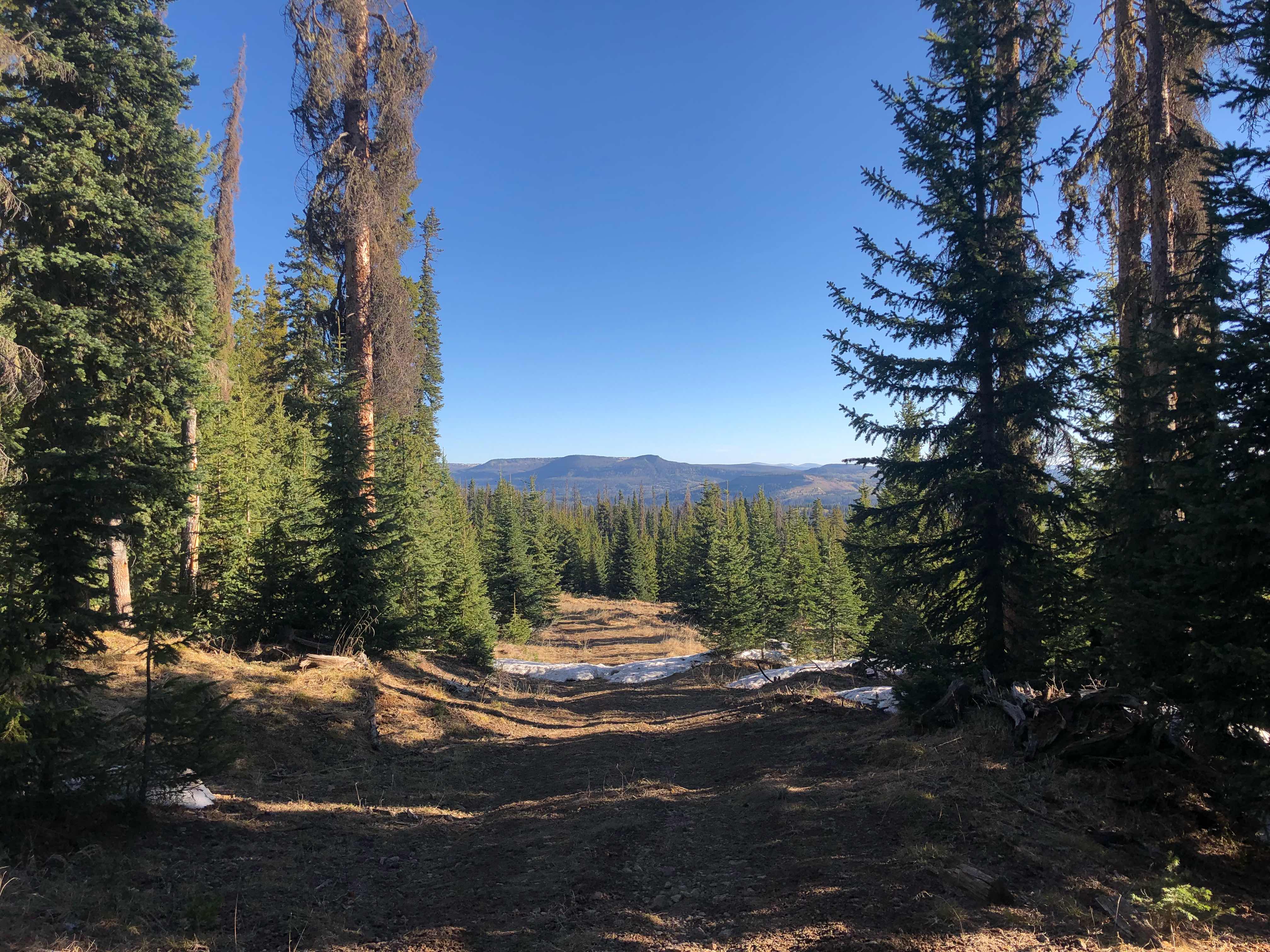 Thankful for a road 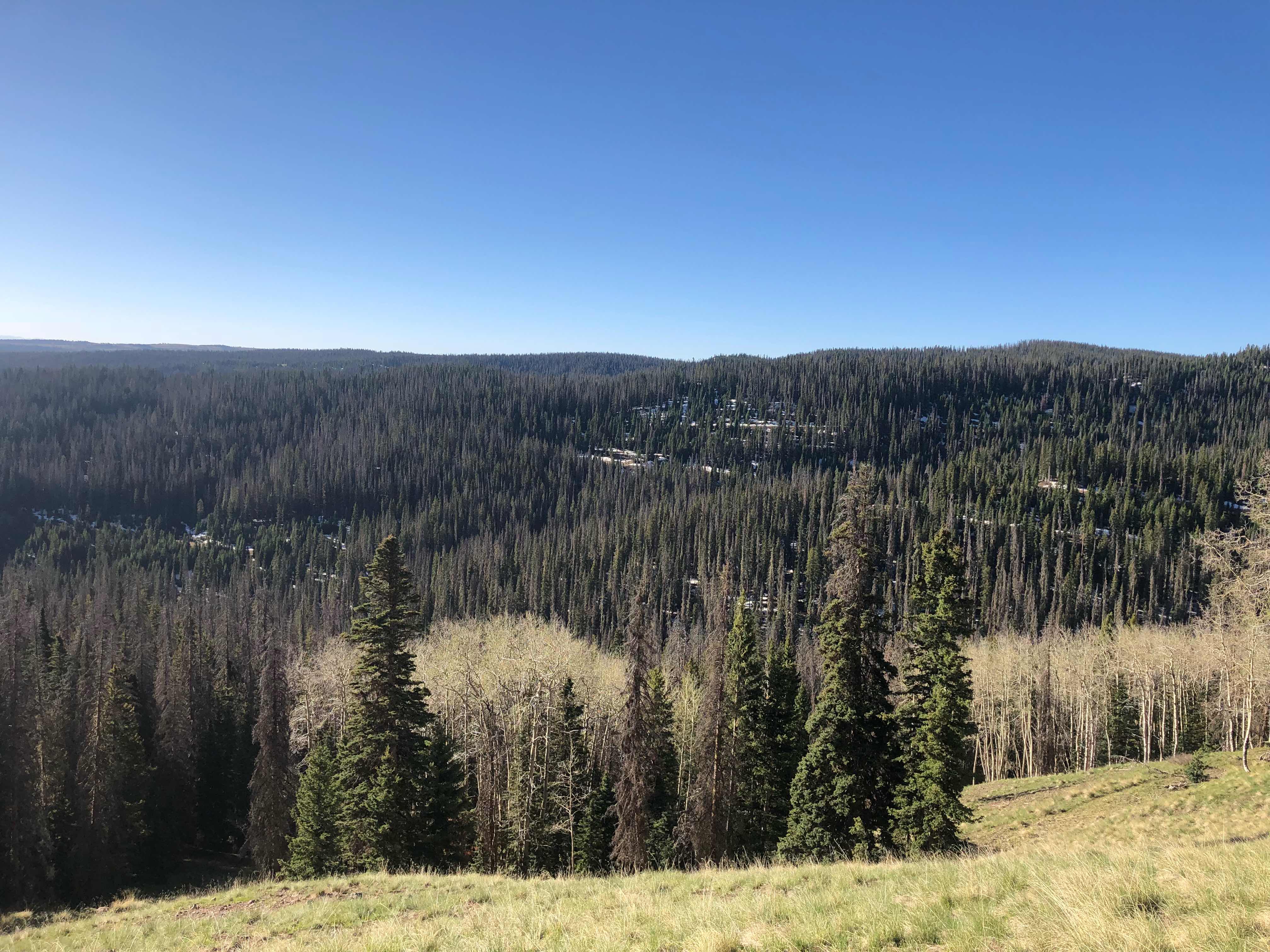 You can see some of the snowy forest I hiked through 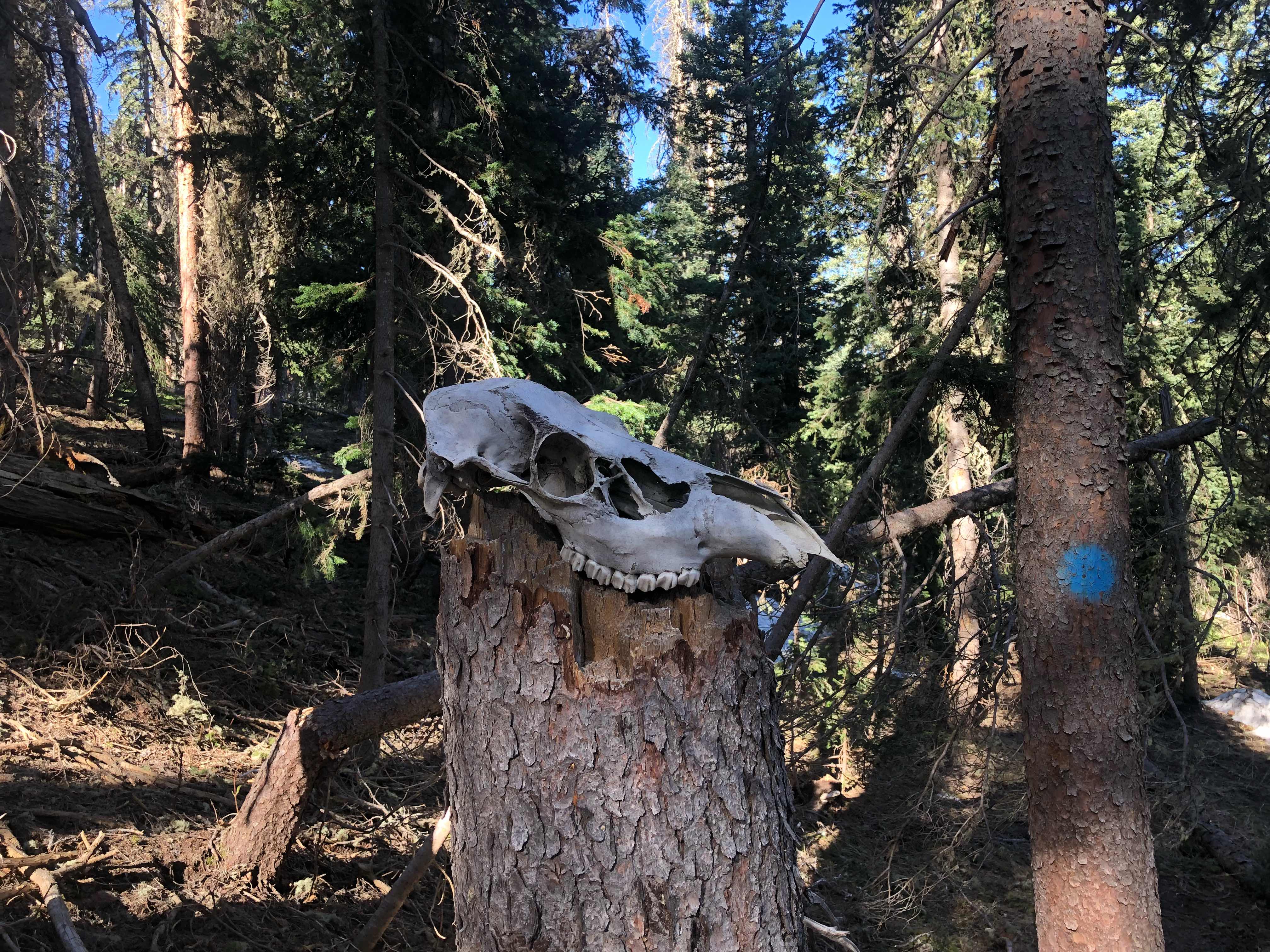 Cool looking skull
After about 7 miles I popped out into a little meadow. I was officially in Colorado! I was dismayed that there wasn’t a border sign or any indication of the monumental achievement. Oh, well. I settled for a couple of pictures before getting ready to move on. 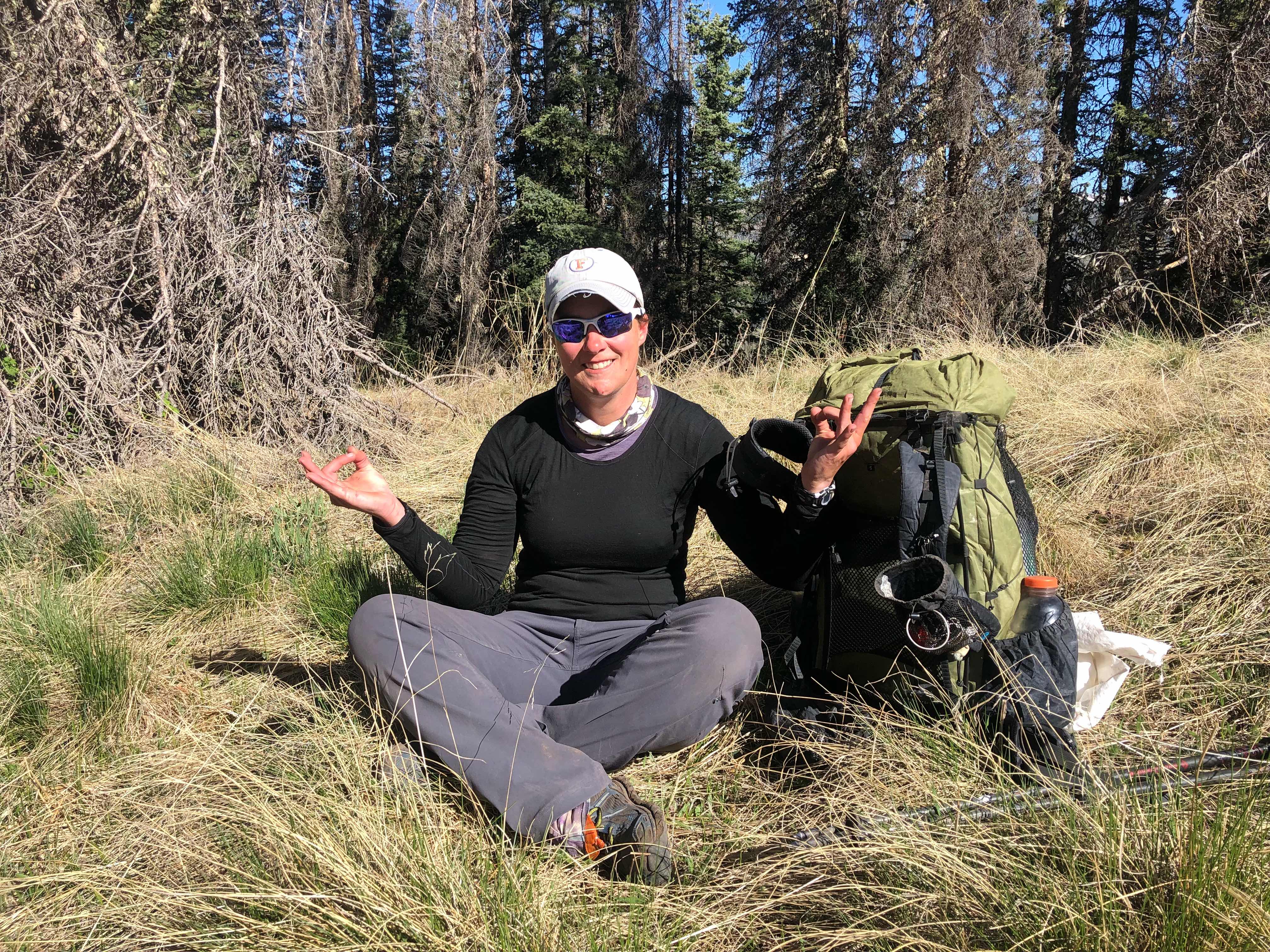 Yoda Buddha pose
Before heading out Mangas, who I had caught up to, stated that he was going to hitch into Chama. Our original plan and the whole reason we have been carrying this much food was so that we could skip going in to Chama. I wasn’t upset by this change of plans. I was thinking the same thing, for the same reason. Electricity. Both of our phones and power packs have greatly been affected by the cold. His were completely dead and I doubted that I had enough to see me through until the next stop. I can live without a phone in my normal day to day life, but out here I rely on it for so many different reasons. The main reason is that my phone is my gps device. I might have mentioned once or twice how hard it can be to stay on trail on the cdt. There was no way I was going to go farther in snowy conditions without my gps app. When Magas first mentioned hitching to town I said that I would go with him, but I wasn’t staying the night. Just eating and charging my electronics. Shortly after this statement I got cell reception and we heard from Turtle. He had decided to take a zero day in Chama. In order to get the group back together again I agreed to stay in town. It will be safer to start out with a group for the upcoming San Juan mountains. 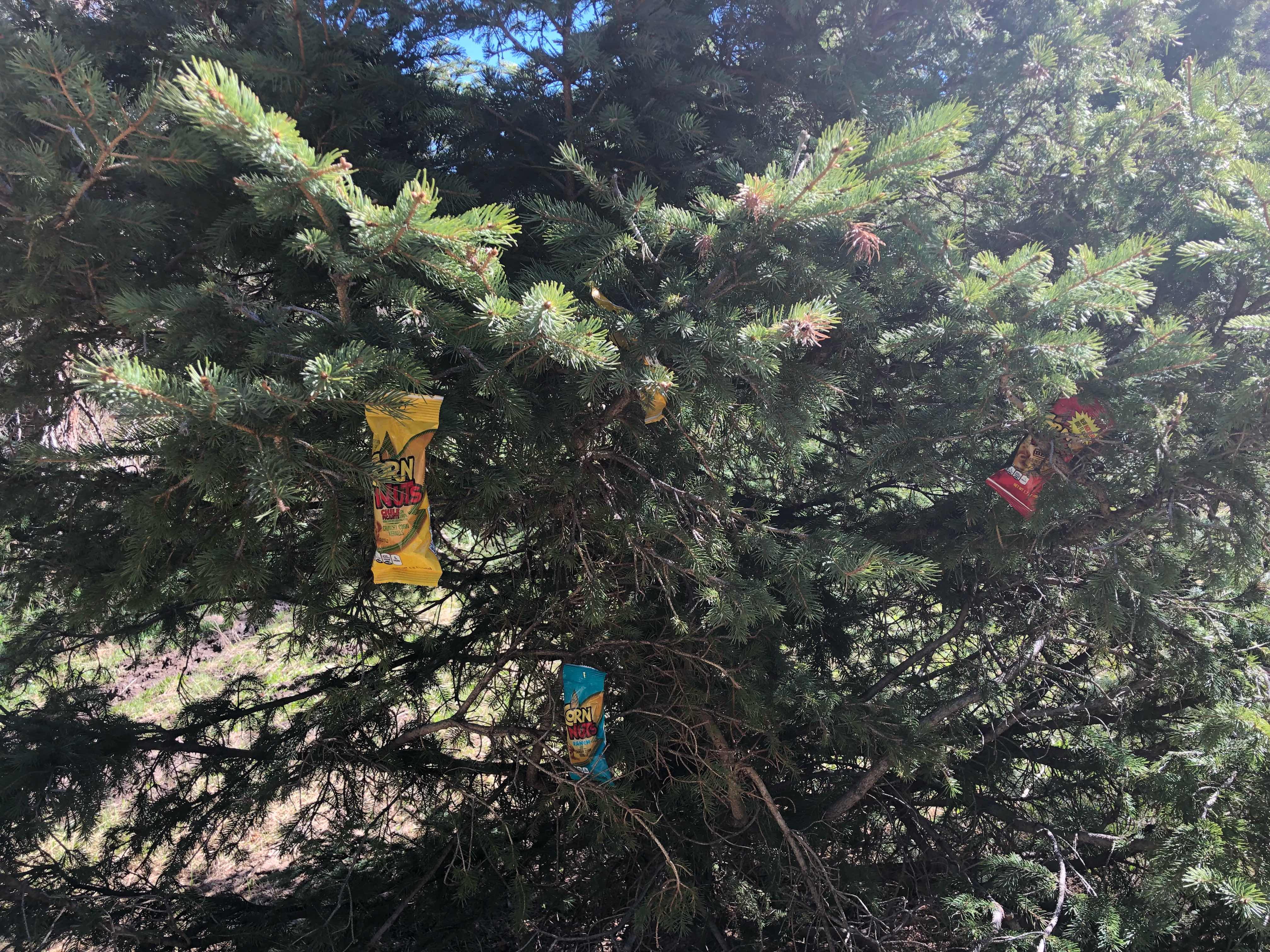 Corn Nut Christmas tree
Mangas and I hiked down to the highway to start the process of hitching to town. Cumbres Pass wasn’t a busy highway and we had no idea how long it would take. We only had 4 cars go by in a 30 minute period. None of them stopped for us. I even took off my hat and pants so I would look more lady like. I flashed my leg at every car, but no one even slowed down. Around the 40 minute mark a truck drove by heading the other direction. He stopped and offered us a ride. Apparently he had just dropped off a few other hikers heading back on trail. The older gentleman, Ralph, is retired and spends his days shuttling hikers to and from Chama. Mangas and I were very greatful. He dropped us off at the same hotel Turtle was staying. He even offered to take us back to the trailhead tomorrow morning. I ended up splitting a room with Turtle.
Since I had never planned on stopping in Chama I didnt have to worry about doing a full resupply. I did however find a small fuel canister, which made it totally worthwhile going to town. I bought a little extra food because I expect our mileage to drop down significantly. Mangas and I went to lunch together. I had my first milkshake of the trail. It was heavenly. I quickly took care of shower and laundry before calling home. The rest of the afternoon was spent chatting with a few new faces, Captain Kirk and Megaman. I’m not sure how Capt. Kirk got his name, but if I had to guess it is because he looks a little like the actor who plays him in the new movies. We ordered 3 large pizzas for dinner and between the 5 of us we almost finished them. 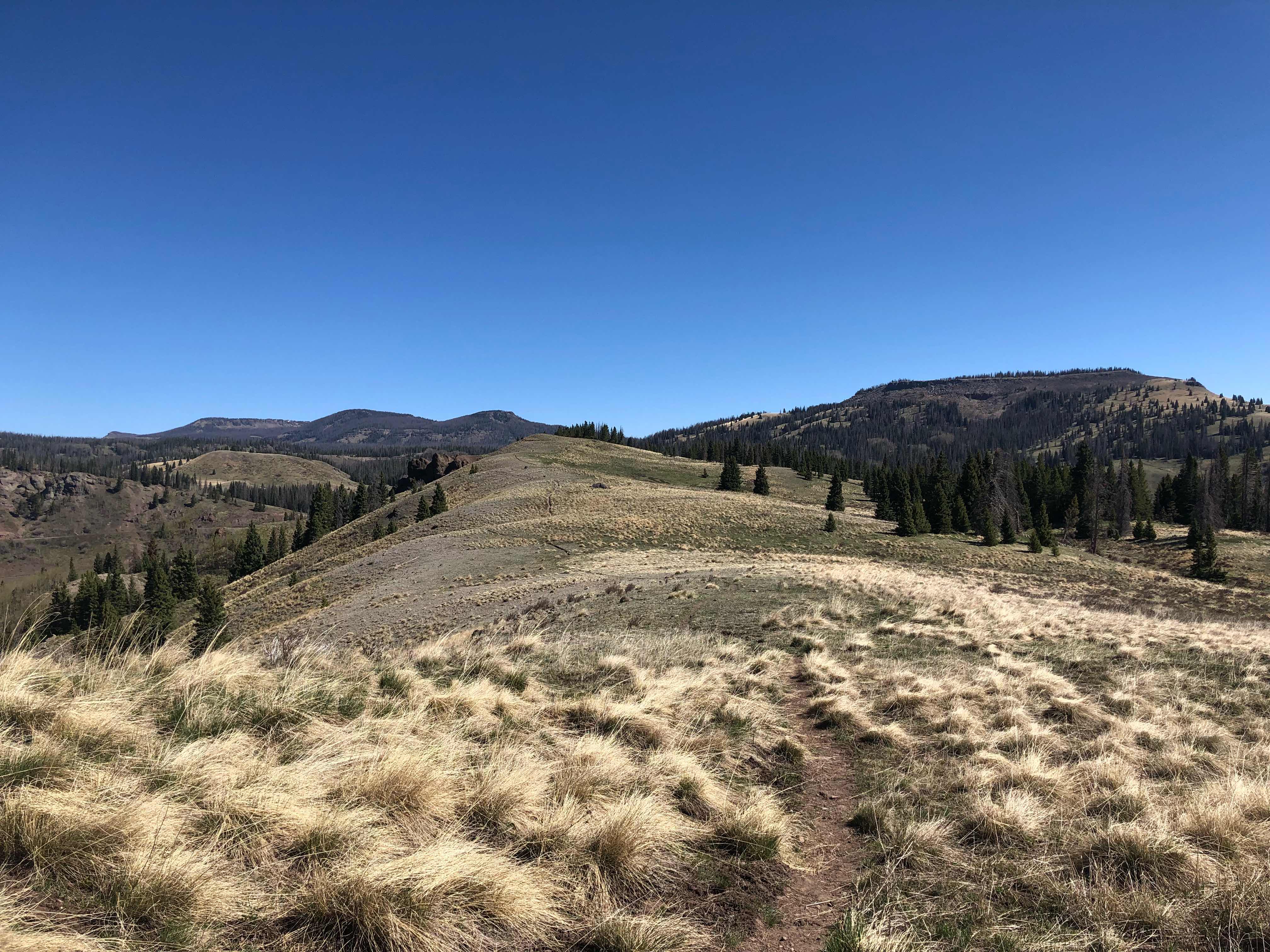 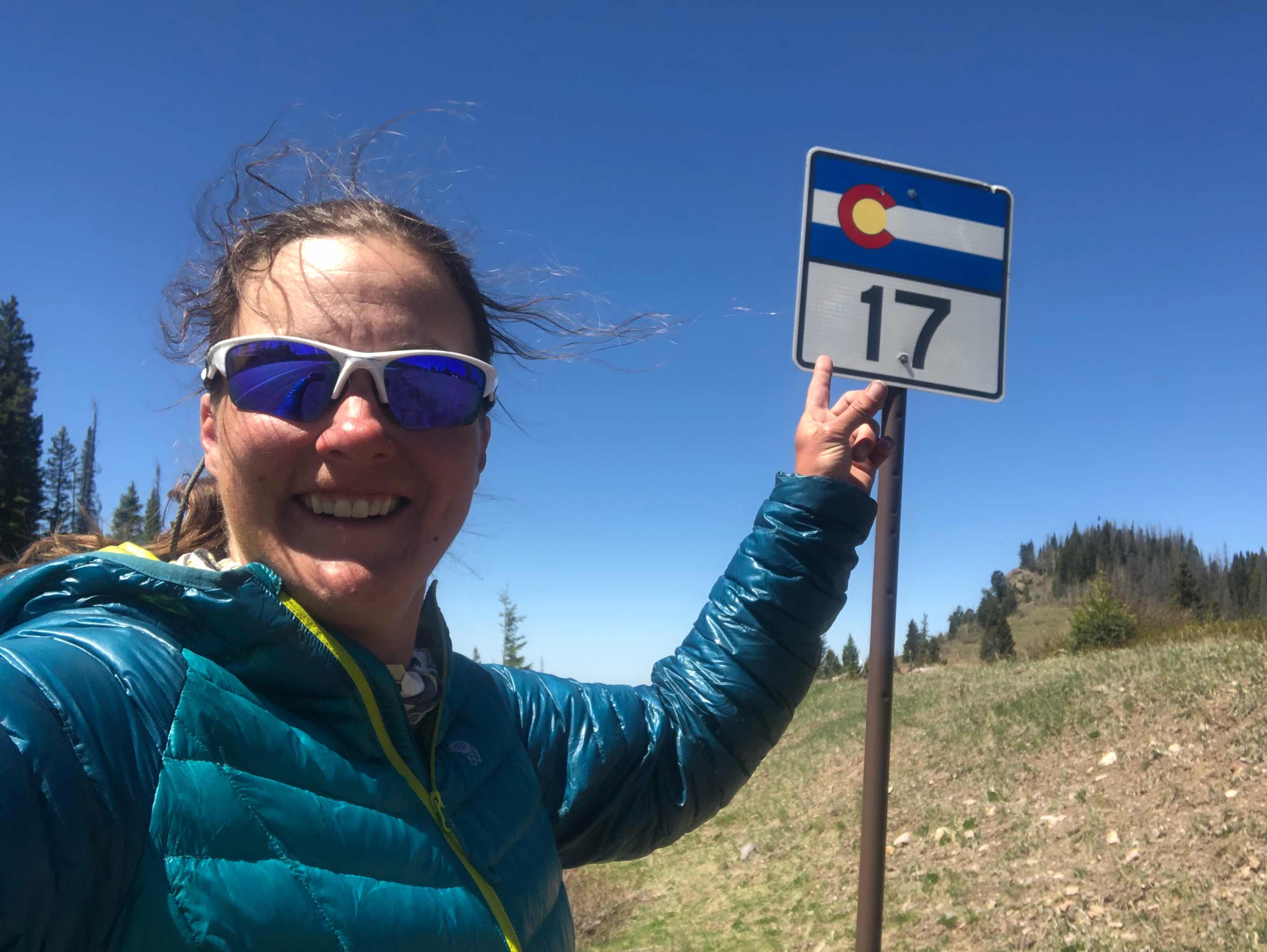 This will have to do for my border crossing picture
Whenever I do laundry I make sure to prewash my socks. It is the only way to ensure that they get clean. I spent 20 minutes hand washing them and was pretty pleased with my results. I got the water to almost run clean. 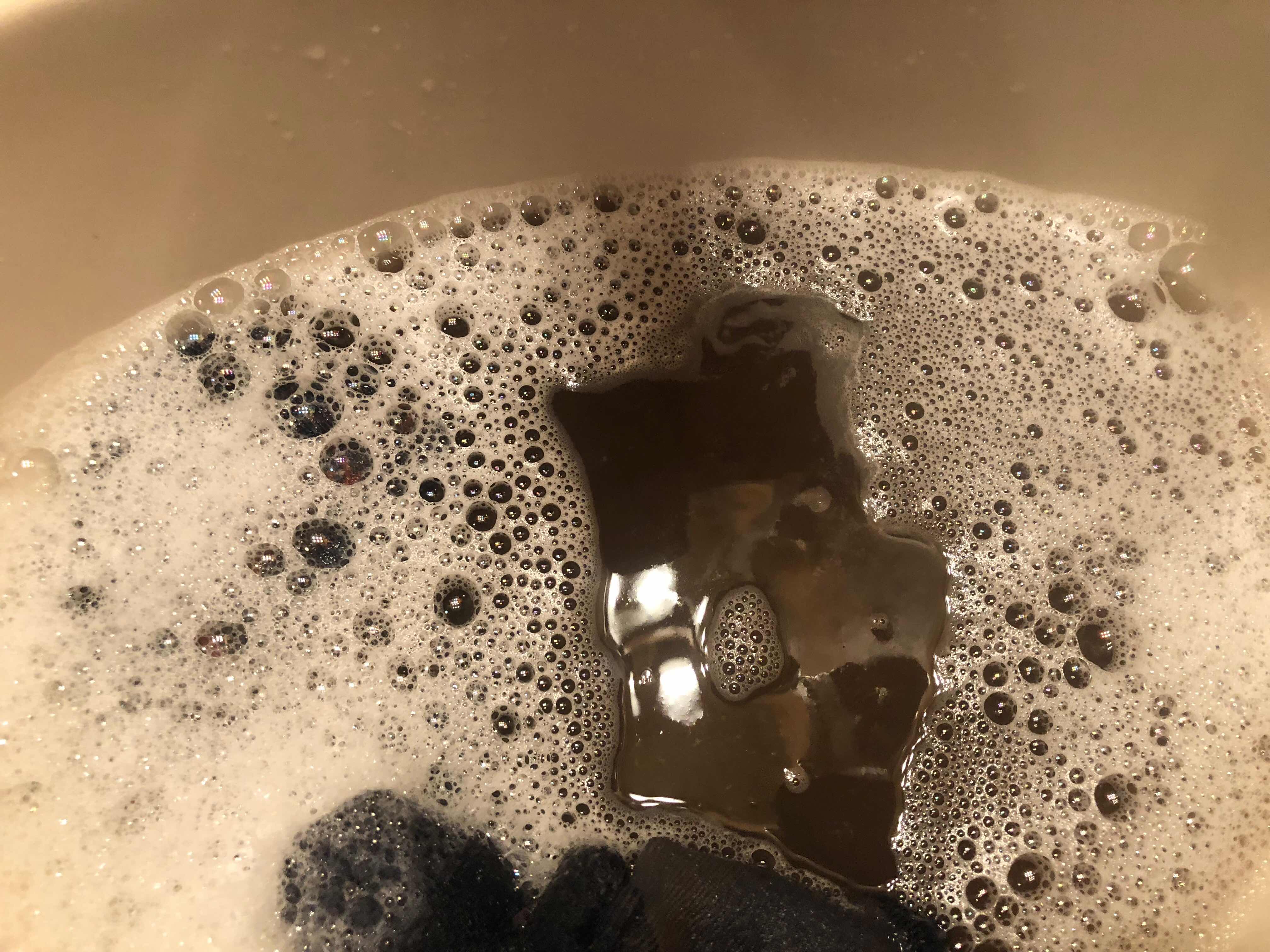 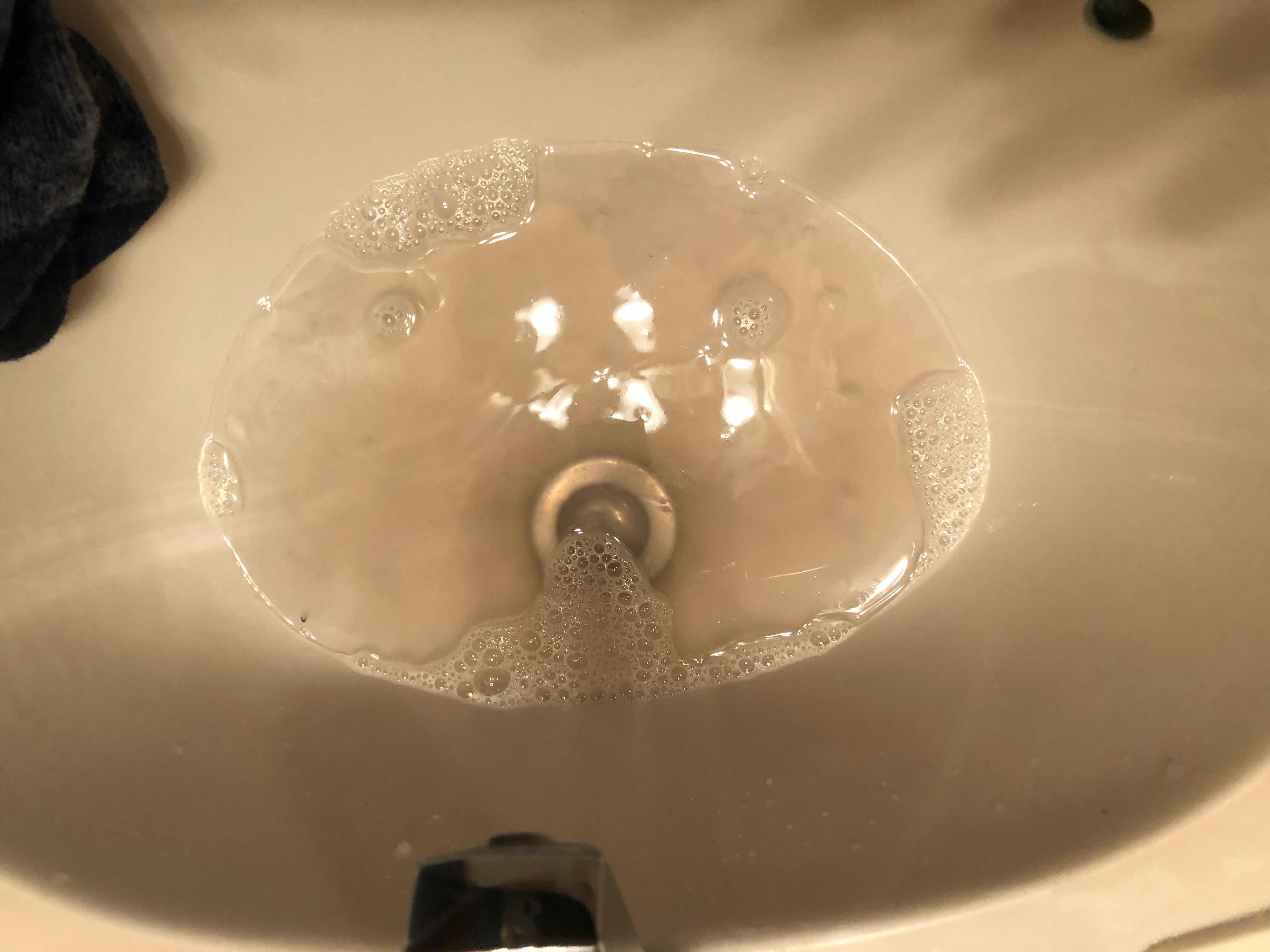 Almost clean
This town day seemed to go by faster than usual. I think I spent too much time socializing. I went to get ice cream a few hours after eating pizza. I bought a small heath bar sundae and only managed a few bites. I was still over stuffed from the pizza. While I was working on my ice cream I tried to get caught up on comments to my blog. I got about two weeks of comments responded to. I’ll try to catch up on the rest on my next town stop. Tomorrow we start in Colorado and I can’t wait.
"Keep on going, and the chances are that you will stumble on something, perhaps when you are least expecting it. I never heard of anyone ever stumbling on something sitting down.”
– Charles F. Kettering