Not to sound like a broken record or anything, but it was cold last night. I barely stayed warm enough. I ordered some new cold weather gear and I can’t wait to pick it up on Monday. It took a little longer than usual to coax myself out of my sleeping bag. I was about 20 minutes later leaving camp than usual. I was presently surprised to see Mangas’s tracks ahead of me. I thought he was camped farther behind me. I caught up to him with in a few hours. The day started off like most days. I hiked on a dirt road for awhile. The rest of the day was anything but ordinary. 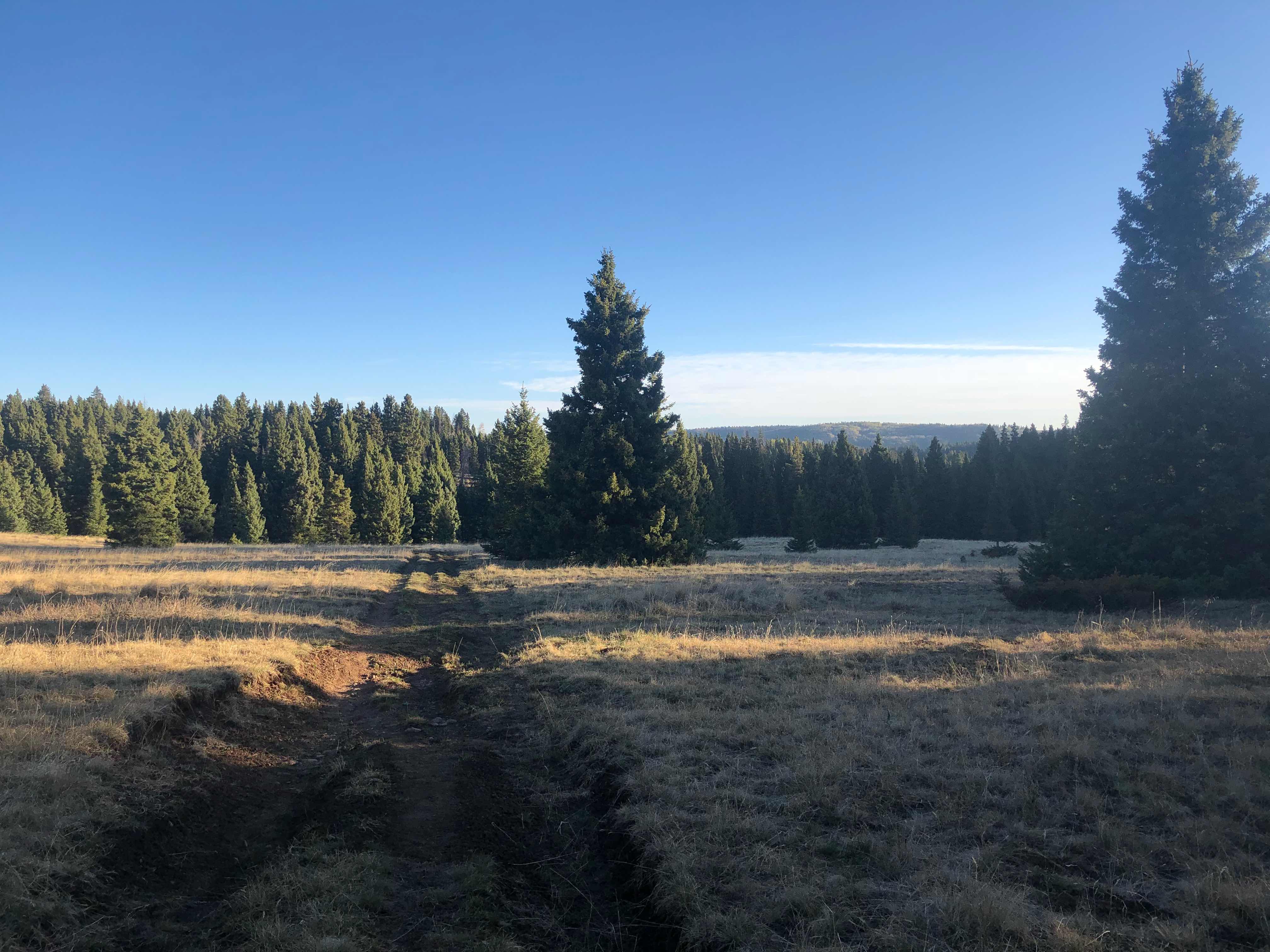 Dirt road to start the day
Shortly after leaving the road behind I walked through a marshy meadow. I spooked a few elk and watched in amazement as they thundered by. Two of the elk held their ground for awhile and I got pretty close to them. The sun was in my eyes so I couldn’t get a good picture. After I caught up with Mangas we hiked together for a little bit, but then I pulled ahead on a short uphill climb. Most of the day felt like a short uphill climb. We slowly gained elevation by traversing a long ridge. Hiking like this is fun because you can see exactly where the trail goes and you can get great views. I was above tree line for most of the day. This is typically a great experience, but today was a mixed bag. I was loving the views, but the 20-40 mph winds not so much. We hovered around 10,500-11,000 feet in elevation. Between the winds and altitude I felt like I was swimming against the current in a pool of molssses. Several times I had to stop hiking so I didn’t get blown over.

Panorama of the ridge 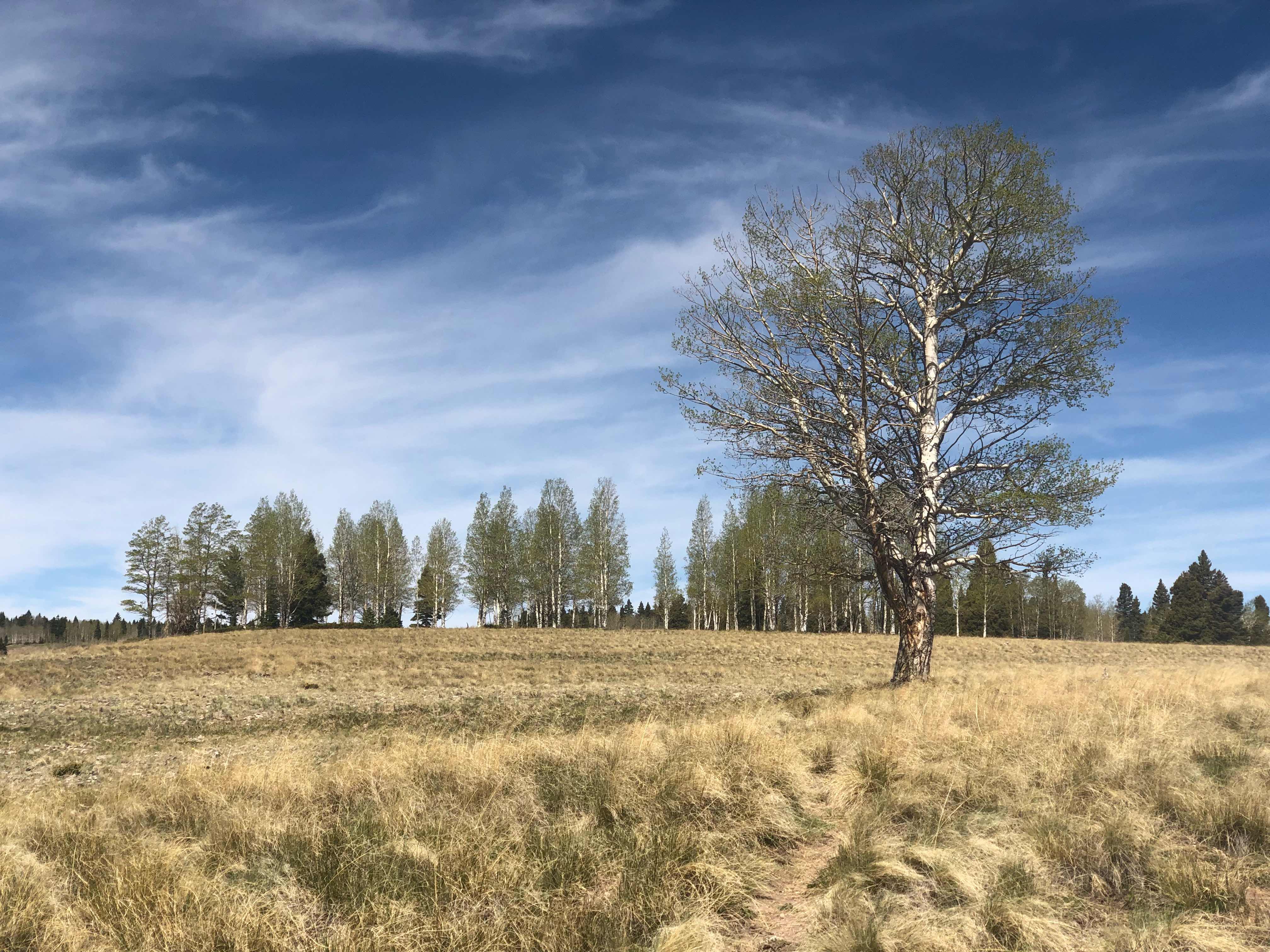 Mostly above tree line. This was just shy of 11,000
Every once and awhile the trail would wind through a pine tree and aspen forest. During one of those spans I walked past a campground at a lake. There were pit toilets and picnic tables, but this time I just breezed past. The wind was too strong to linger anywhere for long. The lake was very picturesque though. 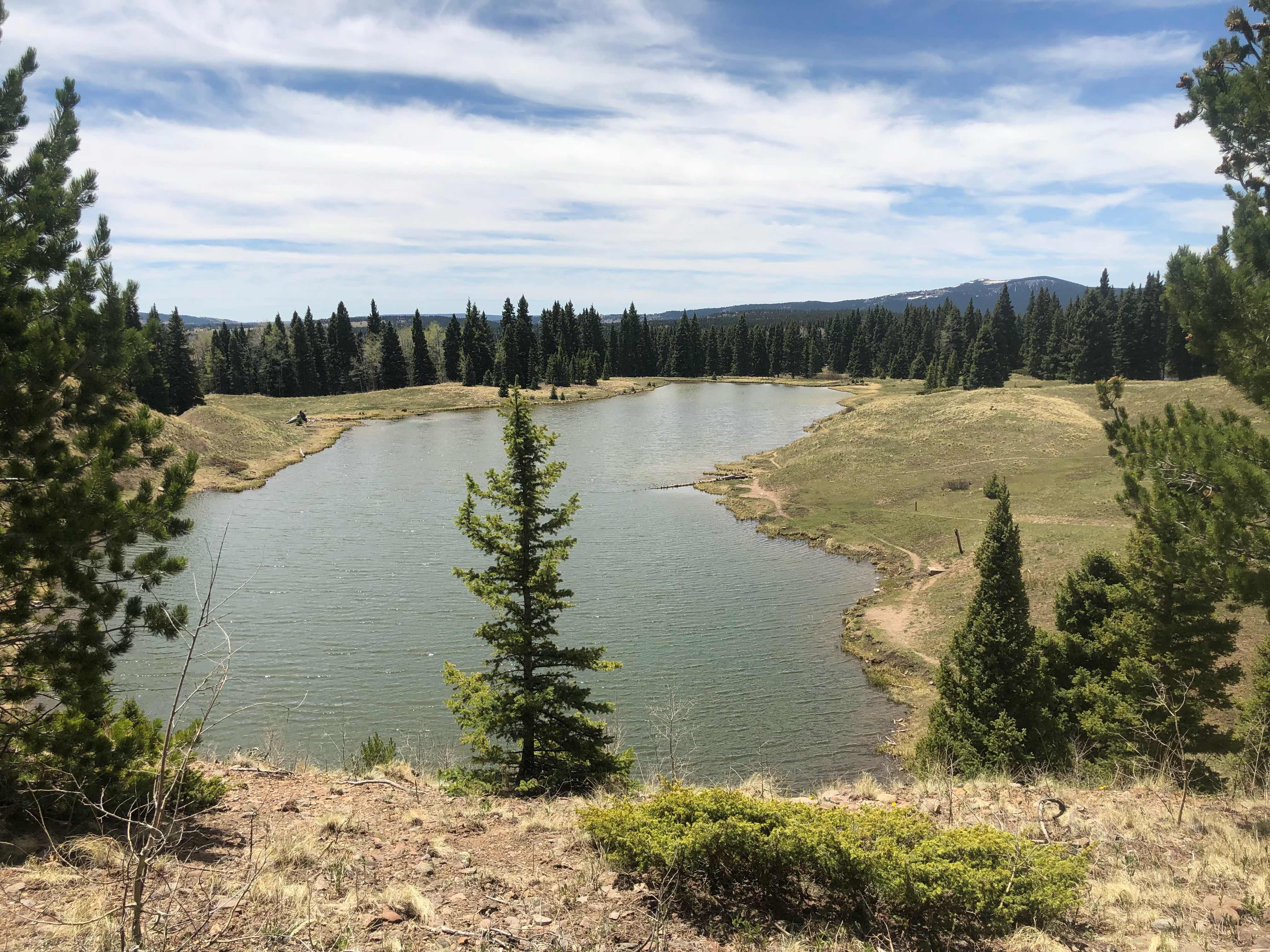 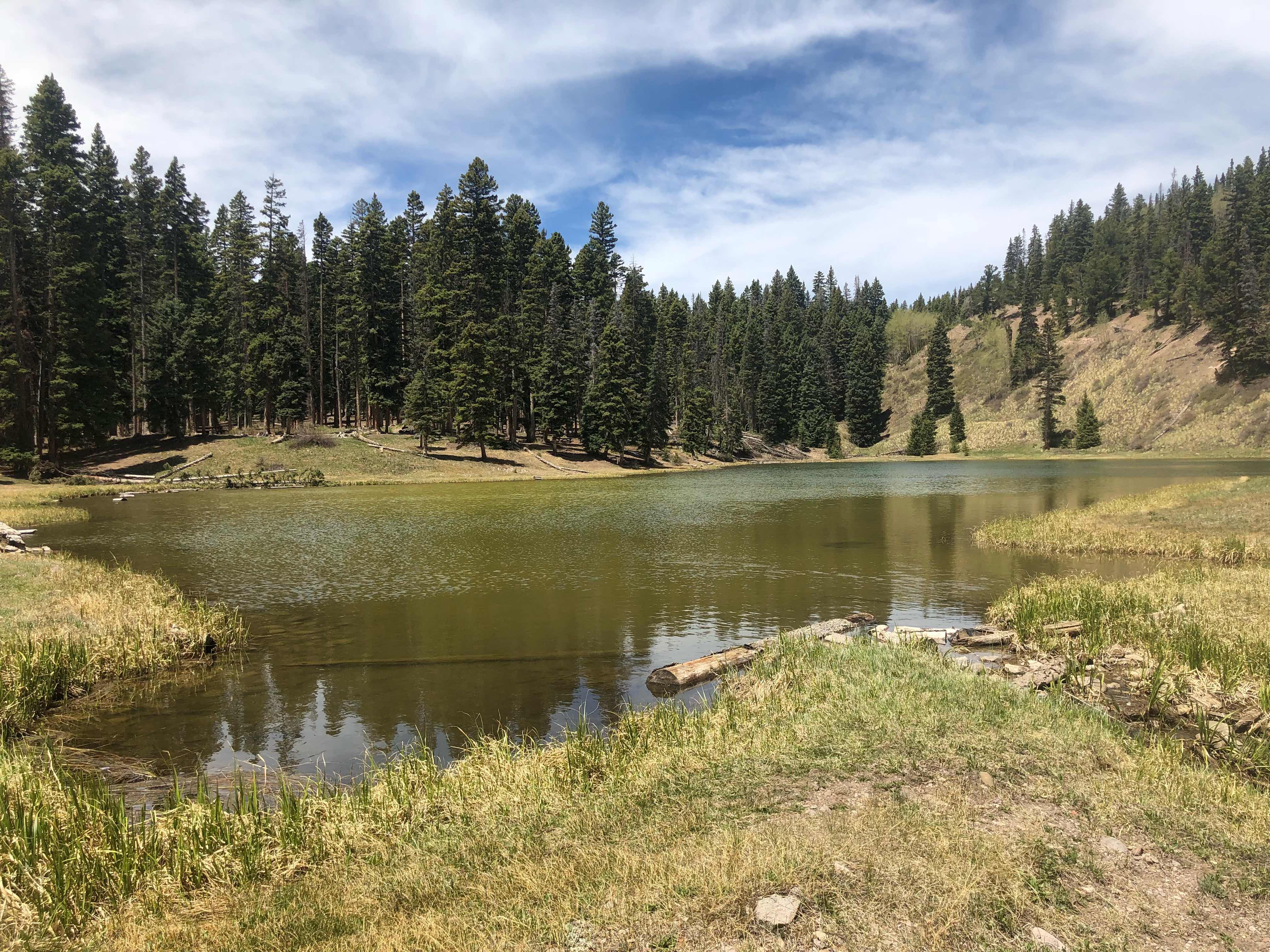 Upper Lagunitas
Shortly after this I spent a terrifying few miles in a forest with nettle kill pines everywhere. With the strong winds I was scared a tree was going to come down right on top of me. I was ready to take a break, but there was no way I was going to linger in that death trap. 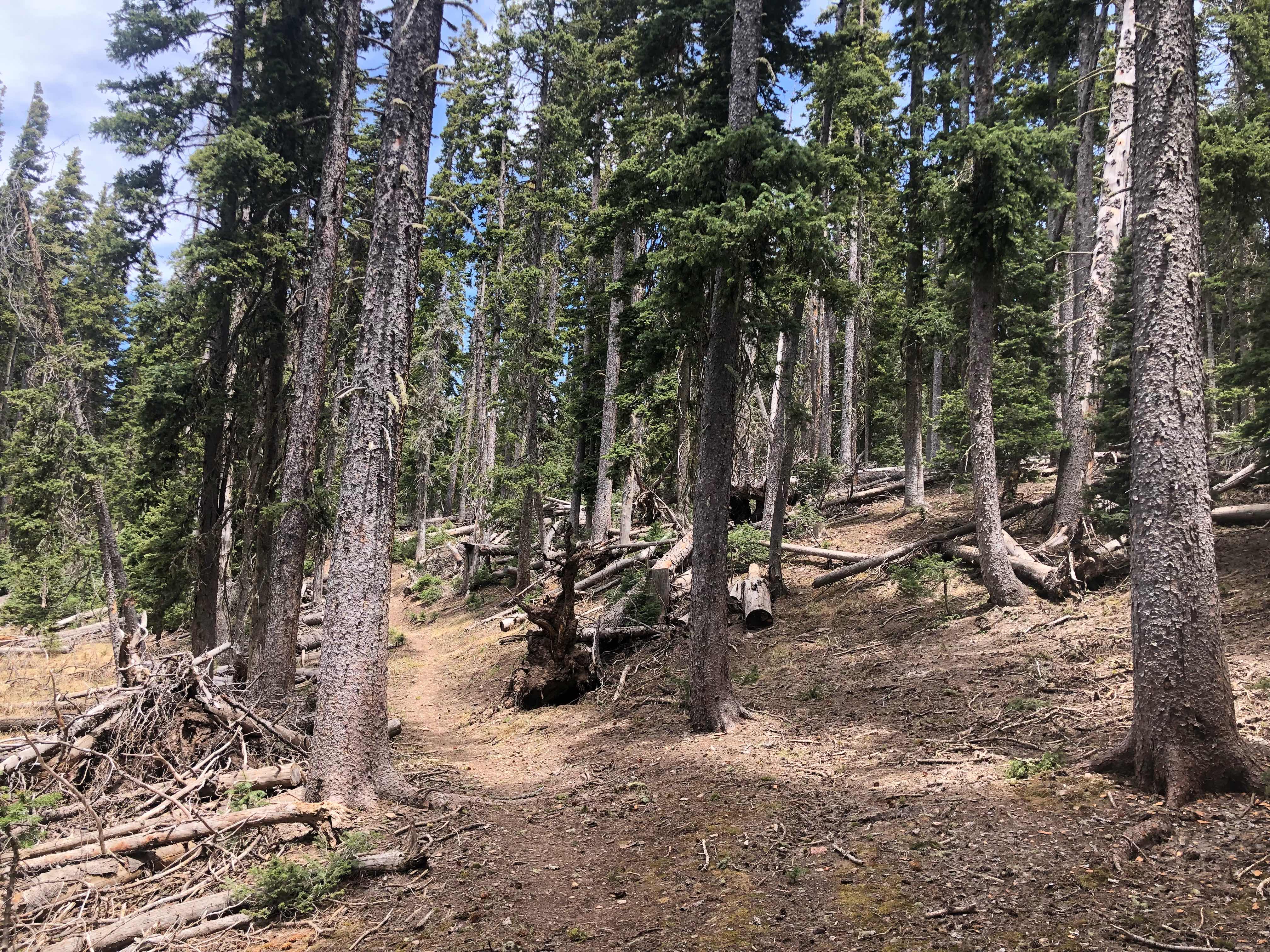 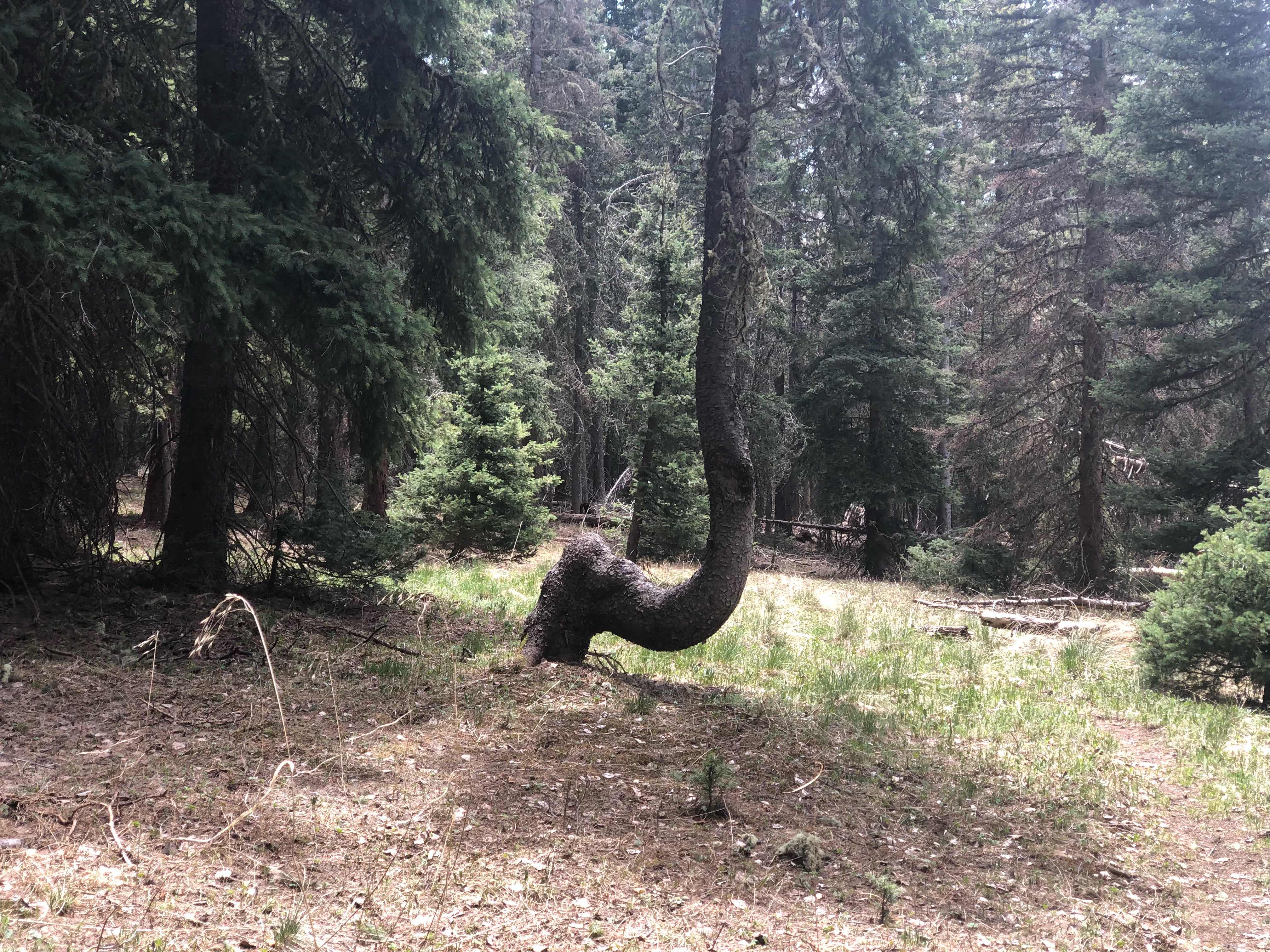 Some trees will do whatever it takes to get more sunlight
I spent another few hours hiking along the exposed ridge line. I was enjoying the hike, but the wind was really starting to wear me down. Just when I thought I was going to lose my mind I got my first glimpse of the San Juan mountains in Colorado. It really gave me a boost. I live in the San Juan’s and this is the first time I’ve gotten to experience the feeling of walking home. Plus, the San Juan mountain range is a highlight of this trip. To say that I was excited is a gross understatement. 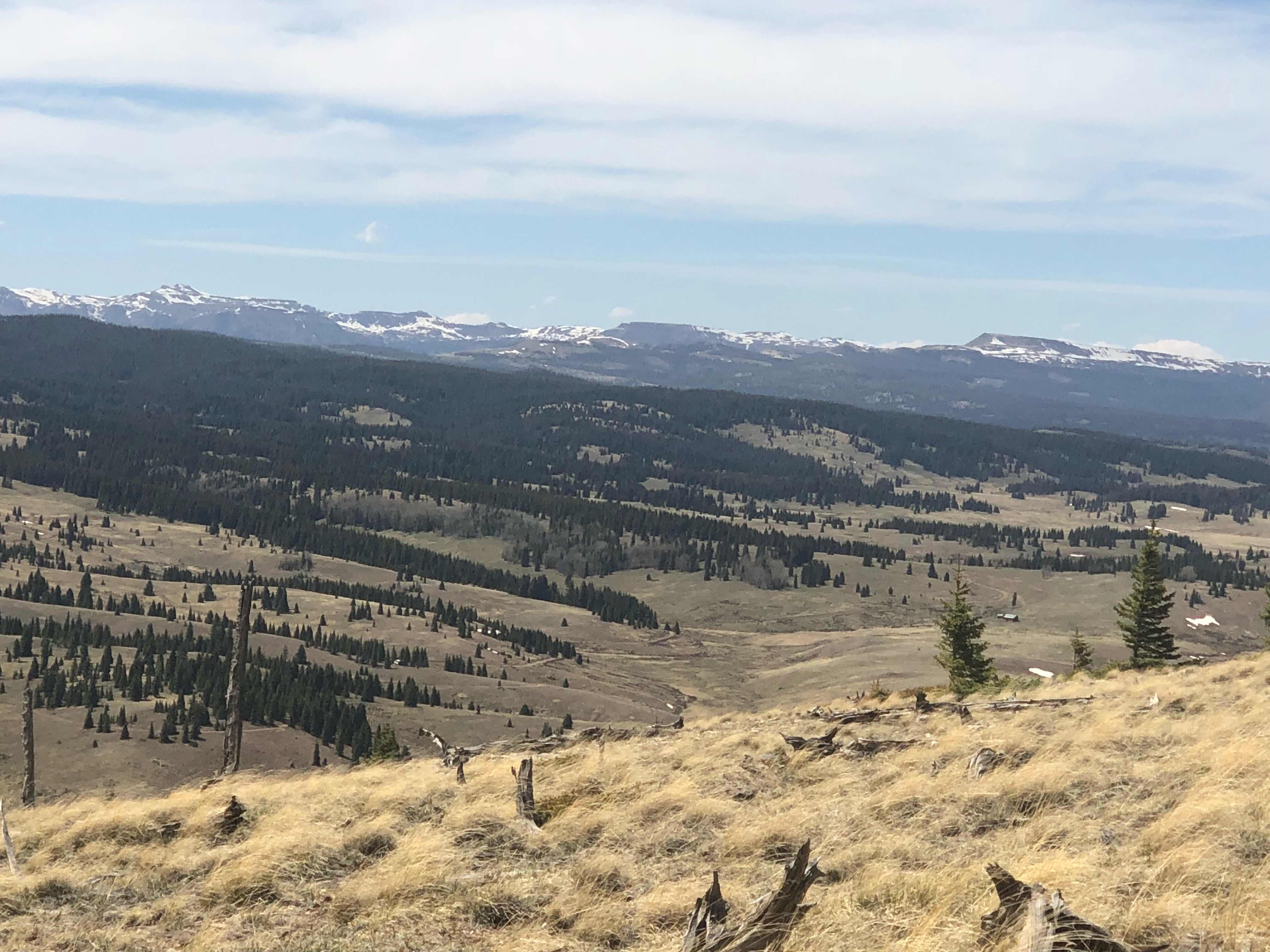 Almost to Colorado
Tomorrow morning I will say goodbye to New Mexico and hello to Colorado! My days of water trouble and desert conditions are officially over. I’d being lying if I told you I was a little apprehensive about starting Colorado. For the first section I’ll consistently be above 12,000 feet. Living outside at that altitude will bring a whole new set of problems. I just hope I’m up for the challenge. 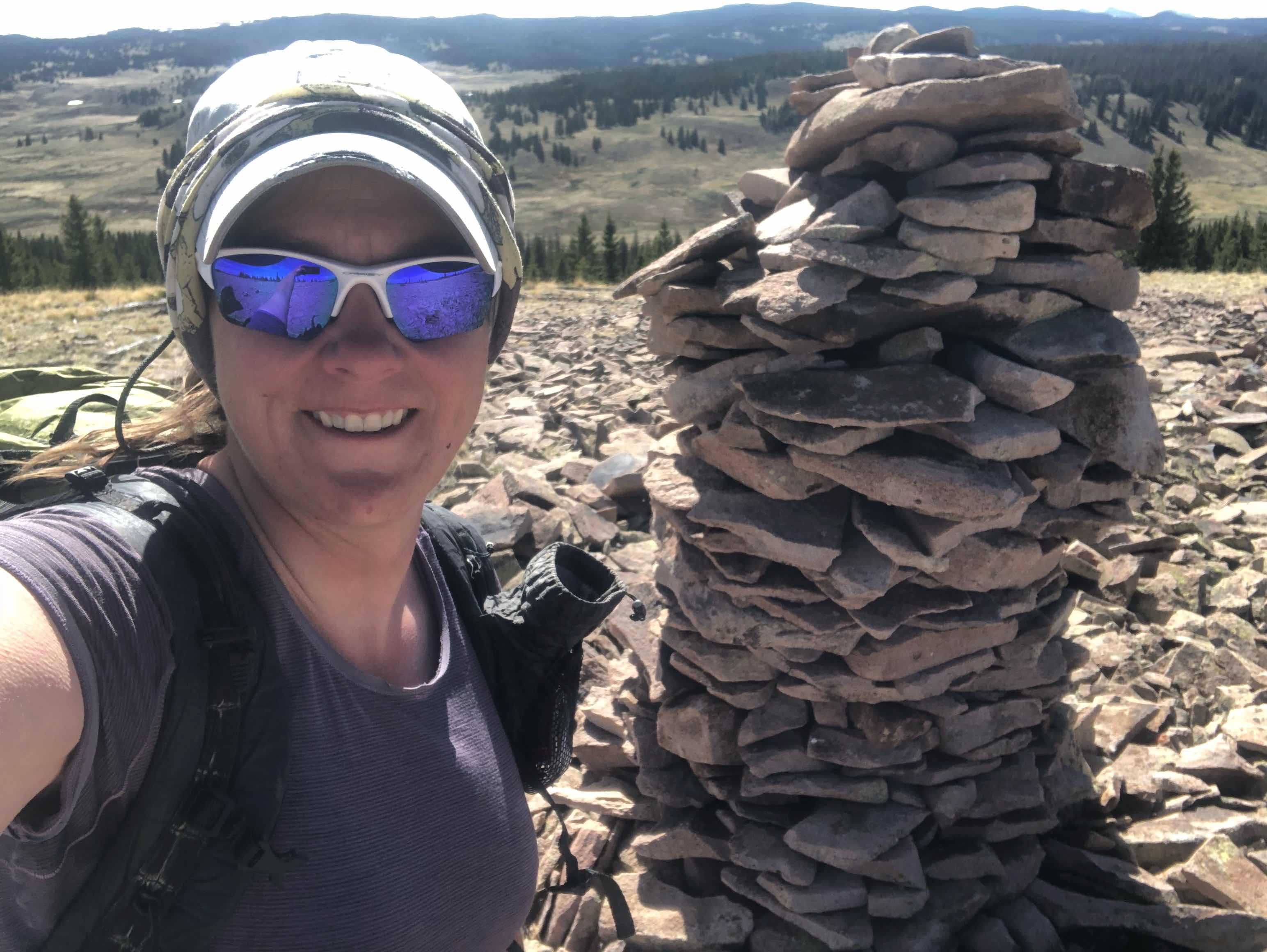 Giant rock cairn. Using my buff to keep my hat from flying away. Also notice that I’m back to wearing my Yoda purple SmartWool hiking shirt
Shortly before the day was done Mangas caught up to me. I had slowed down and taken a lot of breaks. I knew that I couldn’t hike past 26 miles today or I would be camping above 11,000 feet. With the wind I definitely wasn’t going farther. We took a short break together before hiking to water. I decided to go a little farther than Mangas in search of less muddy and marshy terrain. I also wanted to find better protection from the elements than where we were. Mangas was still filtering water when I bid him adios. I hiked a few more miles before I found something to my liking. I quickly started to set up camp. When I got my food bag out of my pack I noticed that I had a problem. My olive oil had spilled all over my food bag and a little had leaked onto my tent. I haven’t had a problem this entire trip with the olive oil. I even had it in a ziplock bag. I think the elevation was to blame. Instead of setting up and eating quickly I spent forever trying to clean up my stuff. Olive oil makes a giant mess :-(
I surprised myself by laughing it off instead of getting angry. Just as I was done eating I looked behind. The sunset had really lit up the sky tonight. 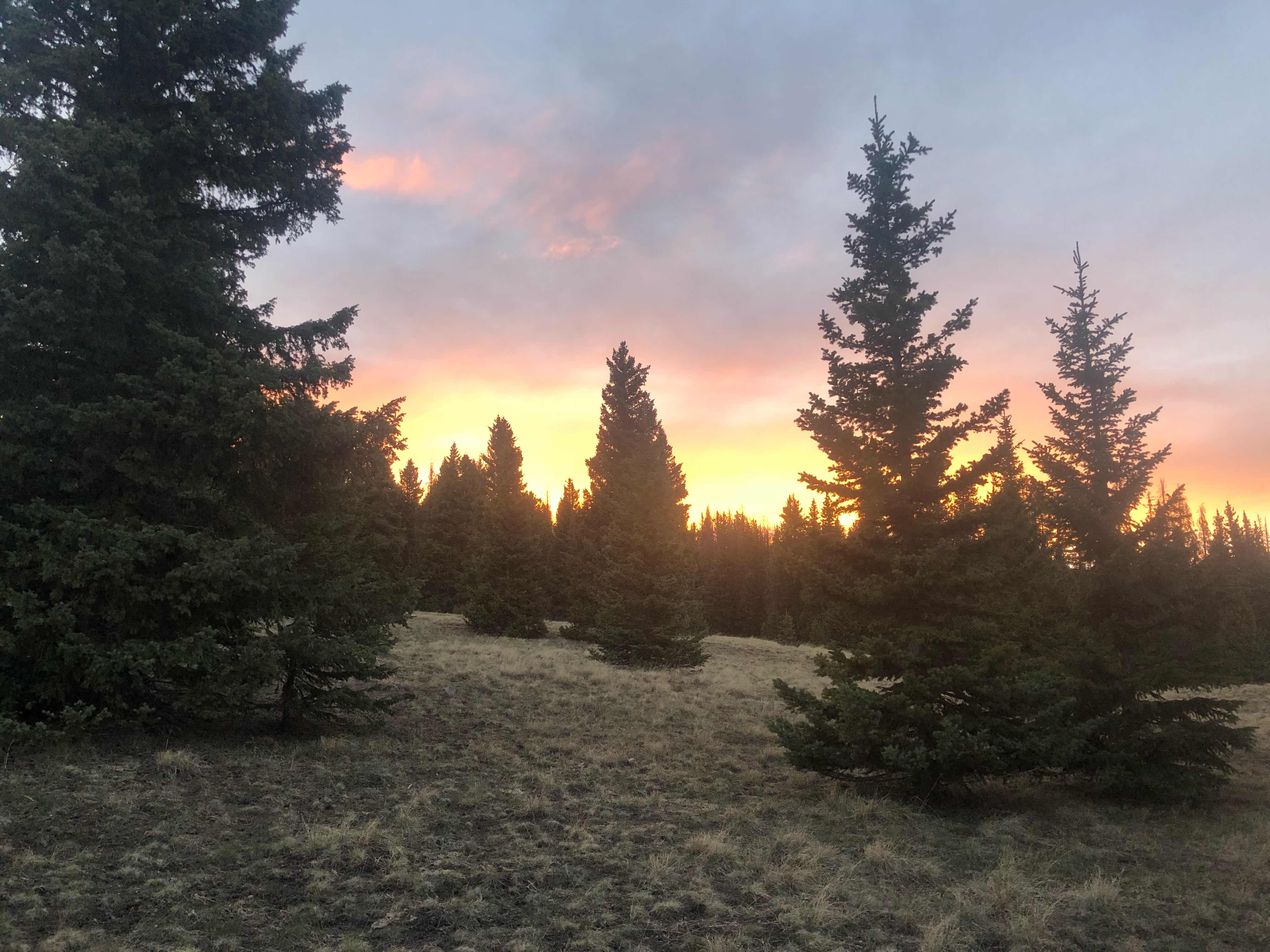 Last day of New Mexico
“The longest journey begins with a single step, not with the turn of an ignition key. That’s the best thing about walking, the journey itself. It doesn’t much matter whether you get where you’re going or not. You’ll get there anyway. Every good hike brings you eventually back home. Right where you started.”
- Edward Abbey