Today was another brutal day. I seriously misjudged this section. Coming out here in May, low snow year or not, without an ice ax or microspikes was just plain stupid. I was grossly overconfident and now I’m paying the price. Most of the day was spent well beyond my comfort level. To be honest I was scared shitless all day. Not only was the terrain very dangerous, but it snowed and sleeted off and on since the early afternoon.
I was woken up at 11:30 last night to the sounds of Mangas and Turtle scrambling to set up their shelters. They both prefer to convoy camp, but it had started to snow. I fell back to sleep almost immediately. The next thing I knew my alarm was going off. We had planned to start hiking at 5:30. Mangas heard me and shouted over that we weren’t going to start until 6. I sleep fitfully after that. It was a very cold start and once again my socks and shoes were frozen. 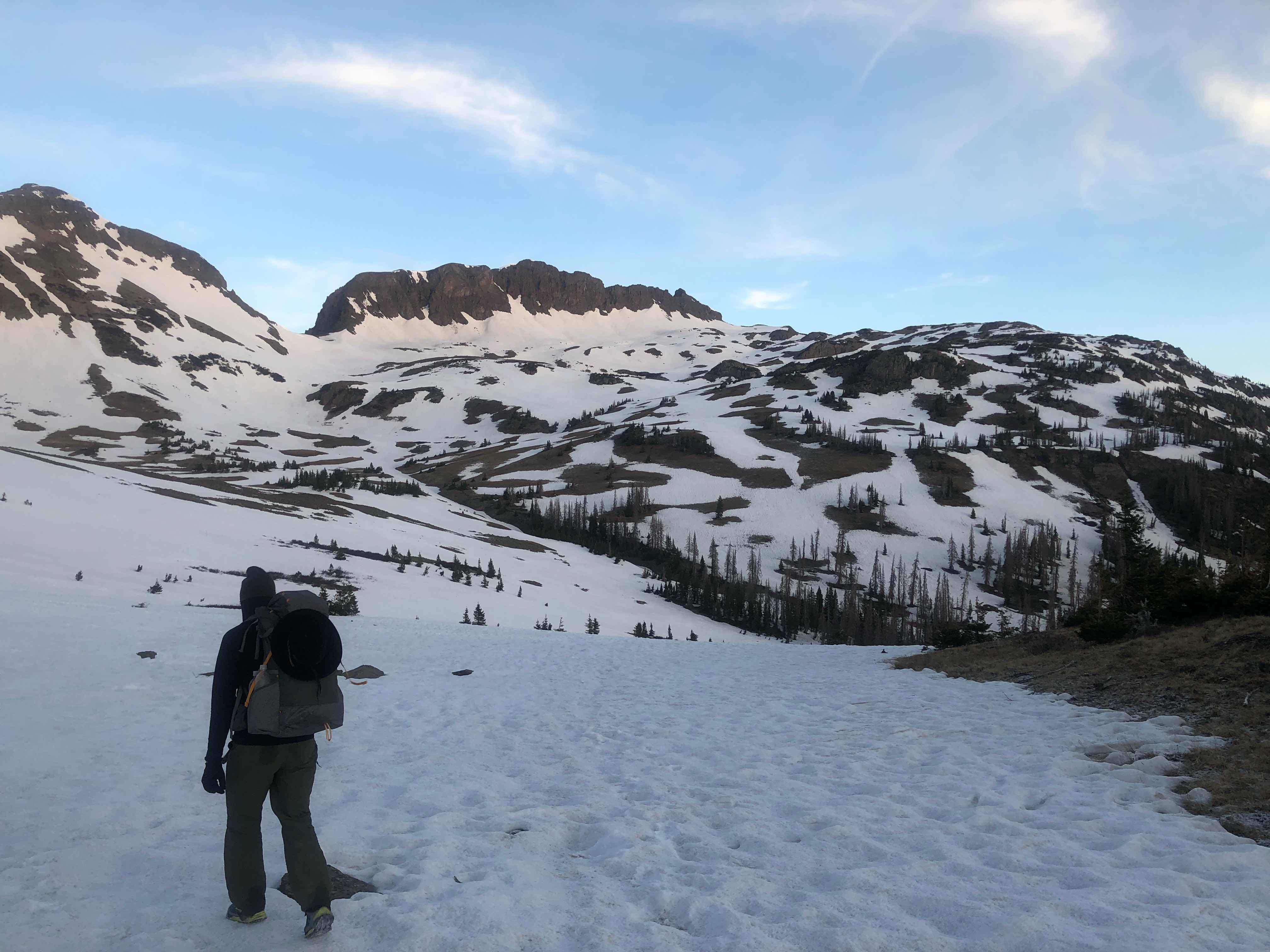 Leaving camp
We were actually making pretty good time this morning. It was the fastest we have done 2 miles since entering the San Juans. The next 3.5 miles didn’t go as fast, but considering what we had to do for those miles we were pleased. We traversed two sketchy ridges with a steep slope that were covered in snow. If I had slipped it would have been a very long drop. Out of the three of us only Turtle has microspikes and an ice ax. Mangas is practically a mountain goat he is so sure footed. So that left me as the only one who was terrified. Eventually we had to drop down and the drop was pretty significant. The slope was pretty steep, but manageable. Turtle decided to glissade with the help from his ice ax. Mangas just took his time walking down. I took two steps and decided that no matter how careful I was I would still slip and have an uncontrolled fall. I decided to glissade as well. I would have like an ice ax, but I made do with going slow and using my poles to slow me down. We dropped down several hundred feet. 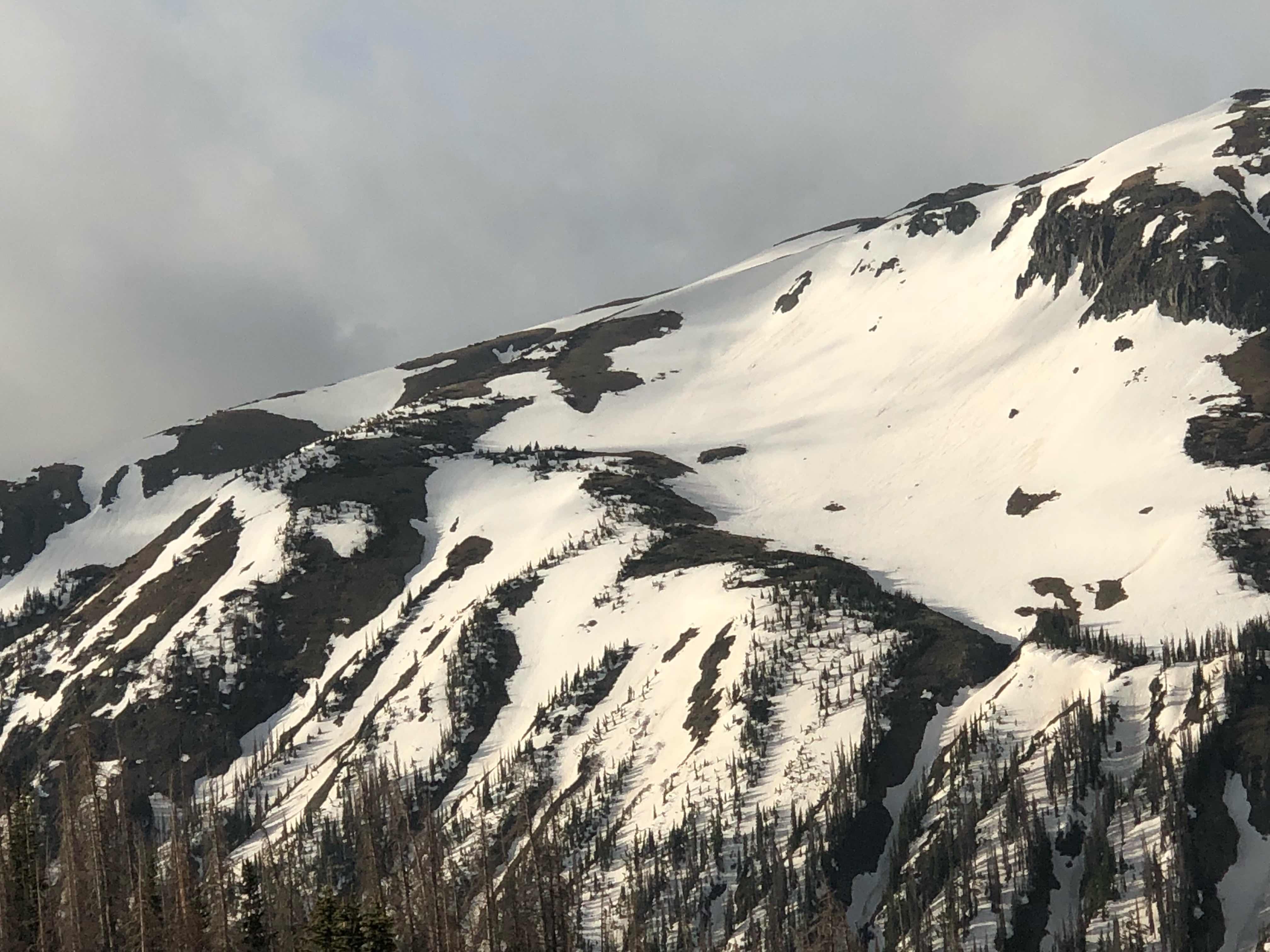 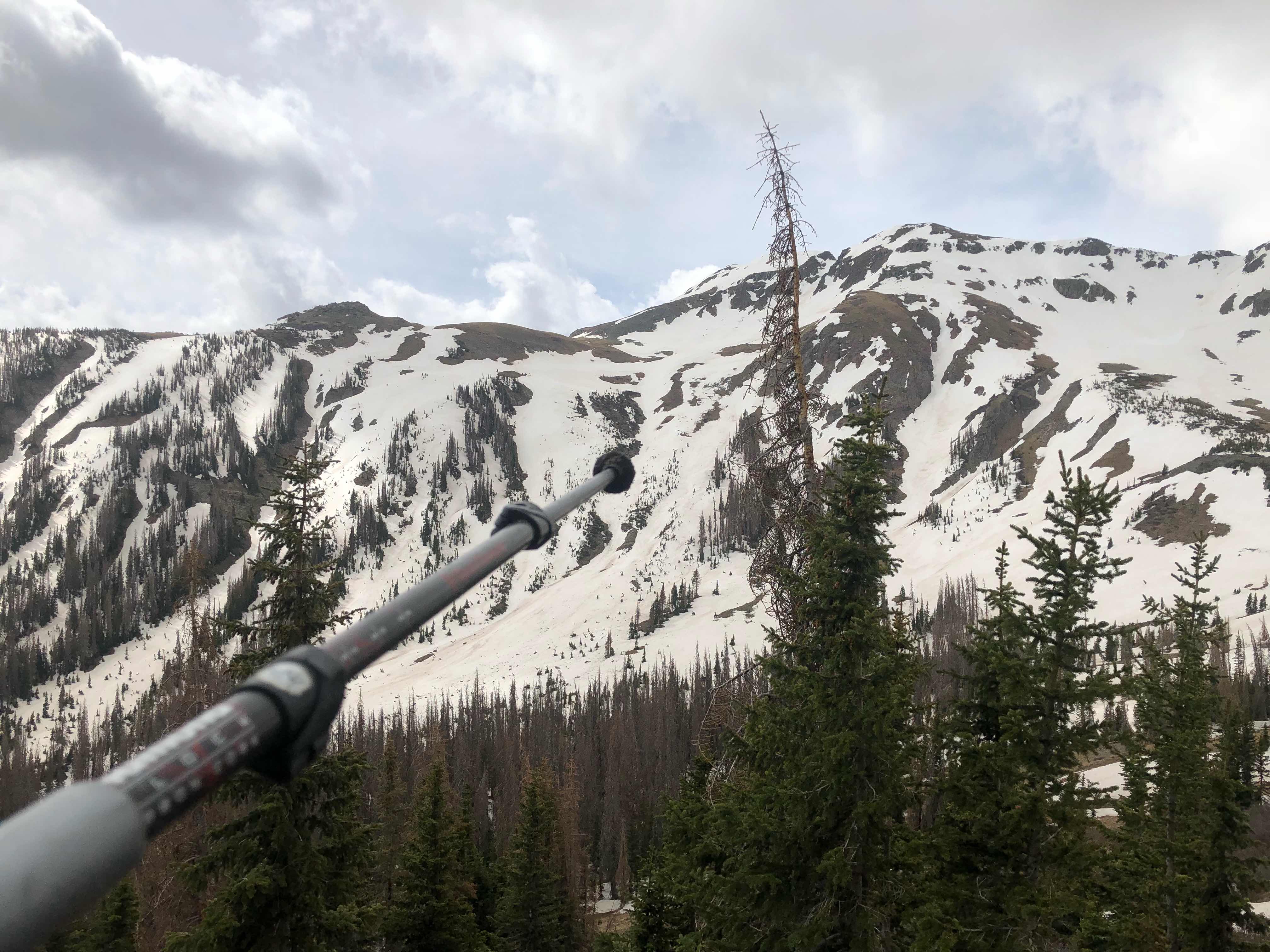 Pointing to the track we glissaded down
Believe it or not, but this was the easy part of the day. I stopped taking pictures shortly after this because I had to focus on each and every step, plus it started to sleet/snow. We did several more traverses across steep slopes that had me absolutely terrified. I couldn’t turn around and go back to Chama, so the only way was to go forward. I just focused on each and every step and refuses to look down. Turtle said he was even nervous on a few and he had on his microspikes. The snow actually helped to make each step stick. Before it started I was slipping a lot more. 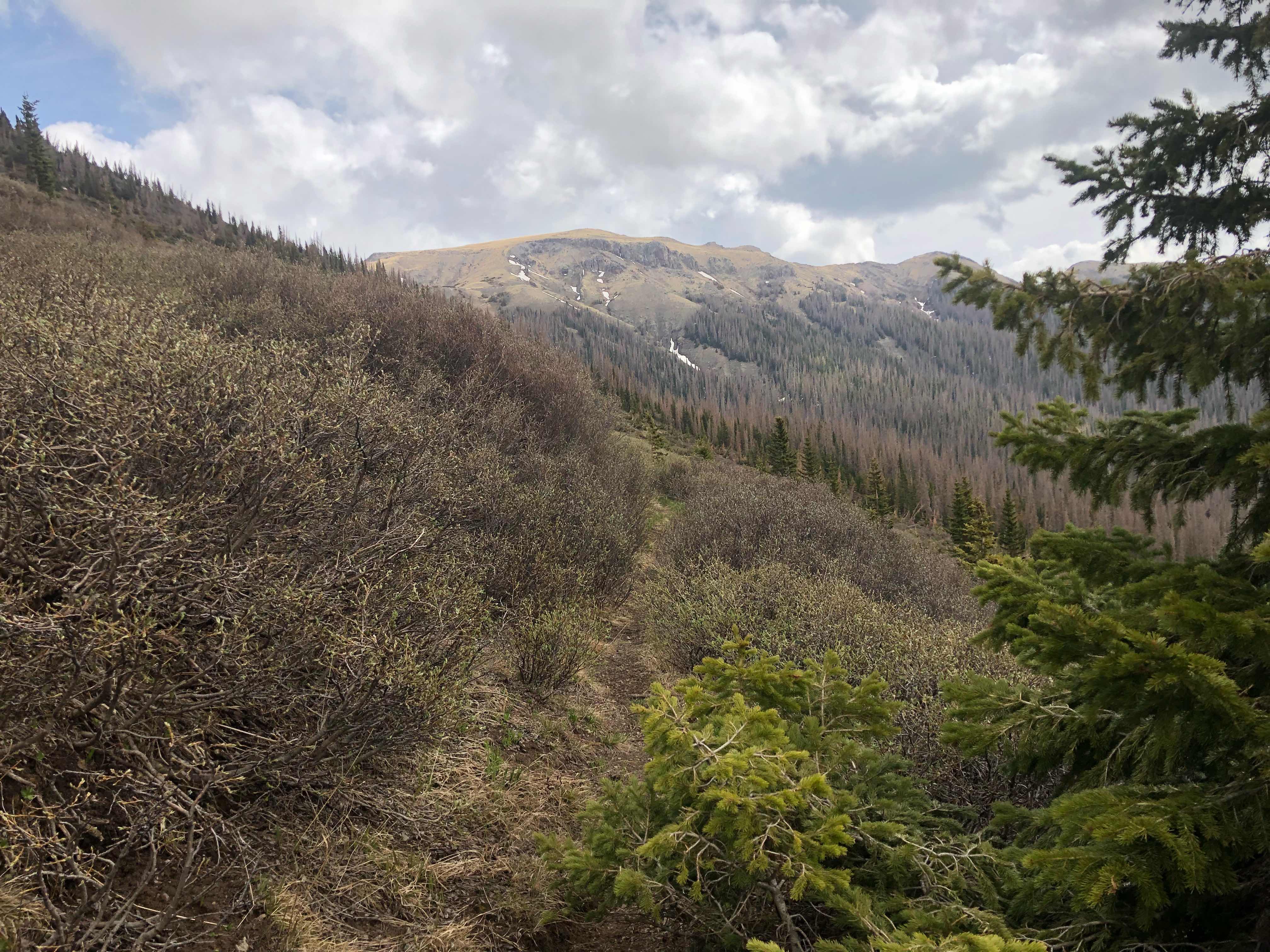 Nice easy trail for about .25 miles. Just after this things got real 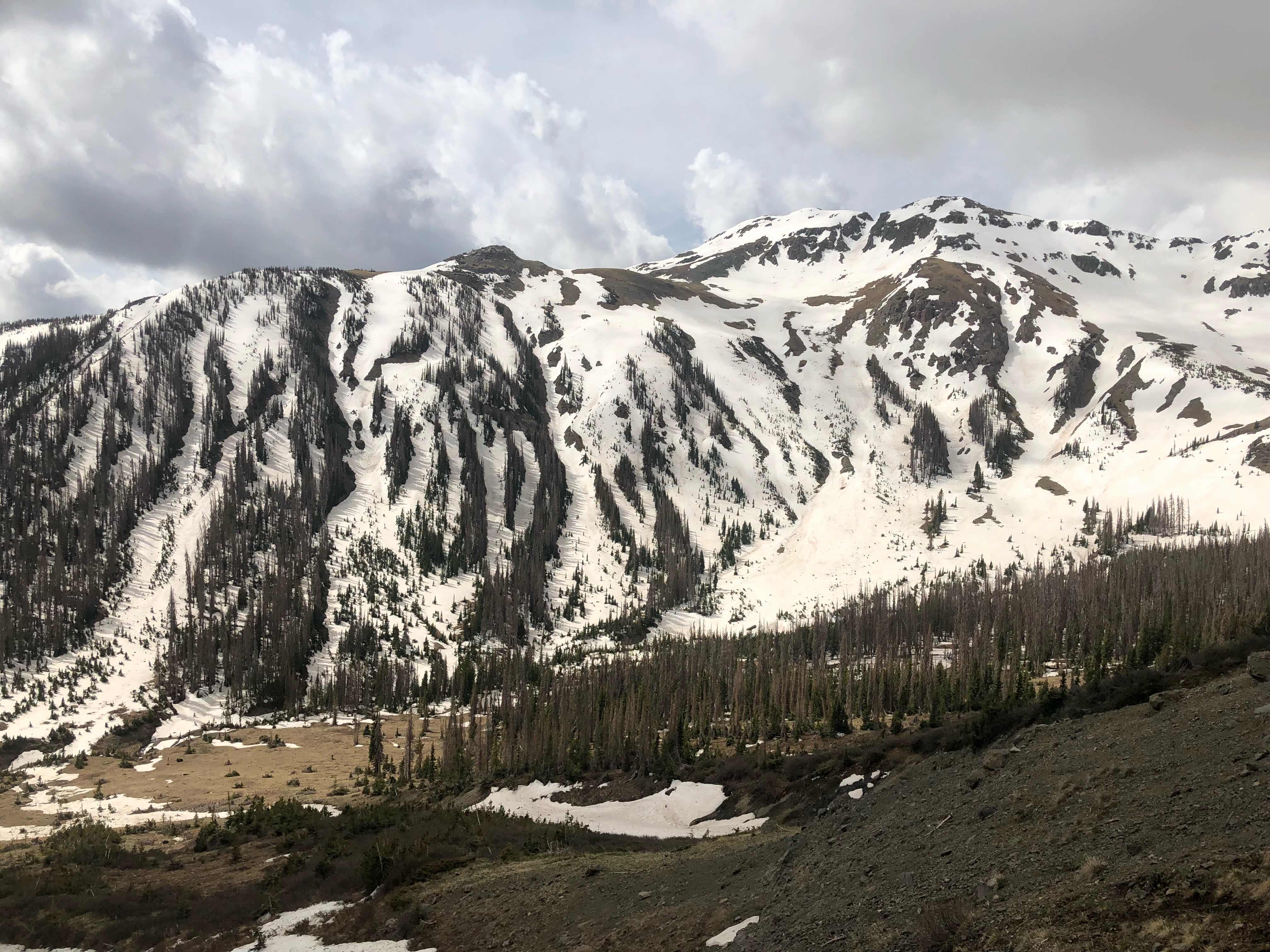 Yup, we traversed that before glissading down 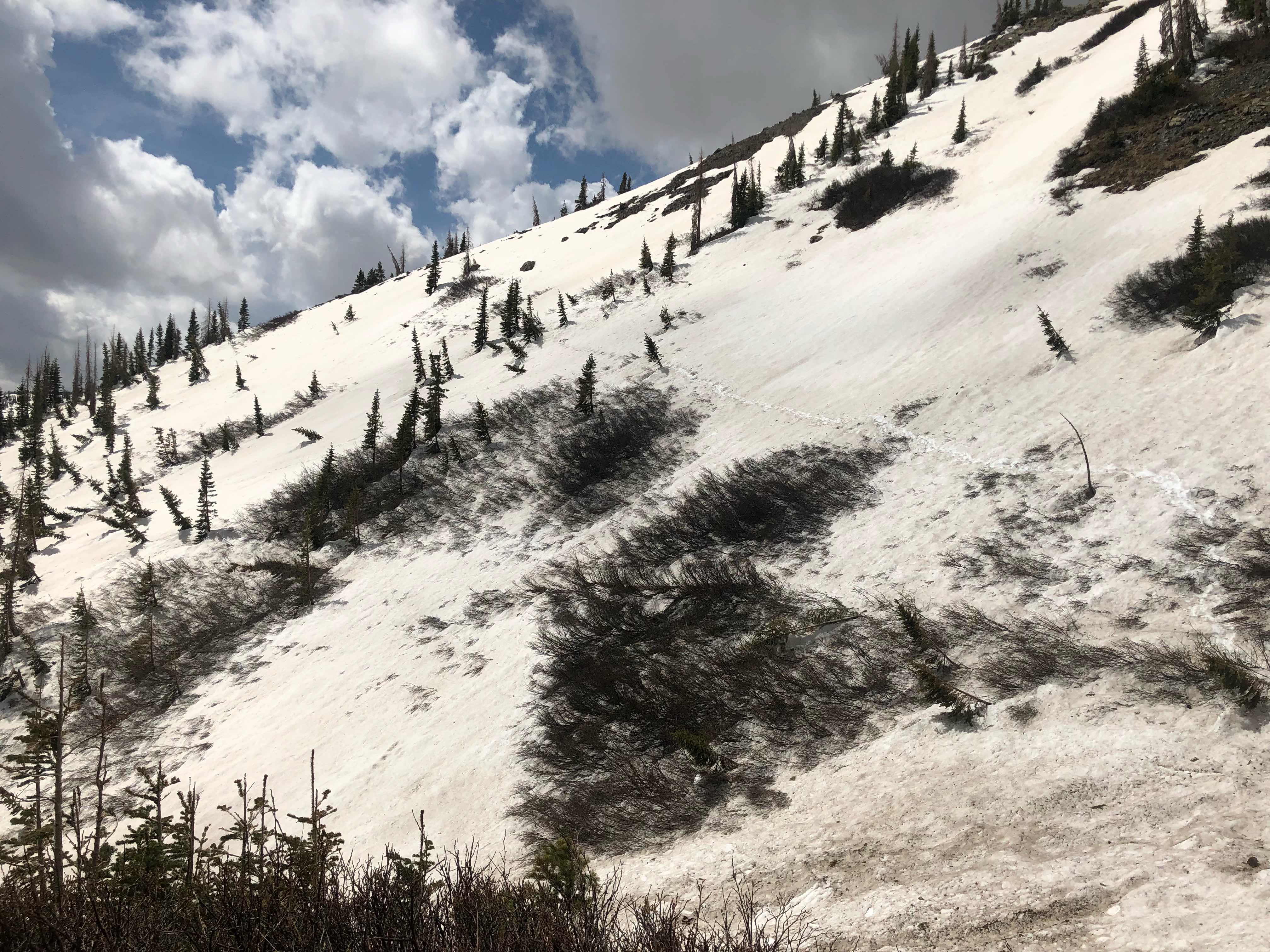 If you look closely you can see our tracks 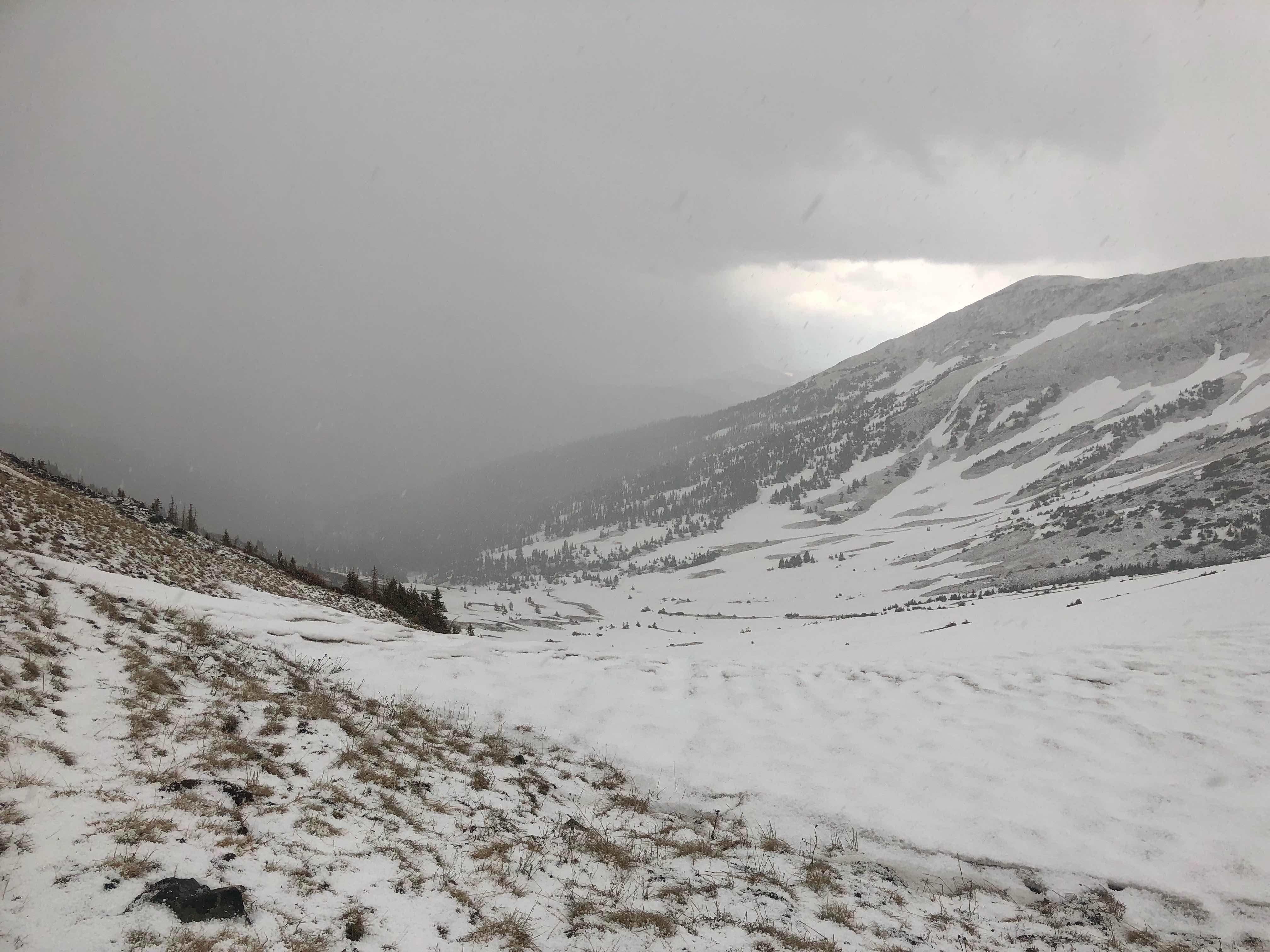 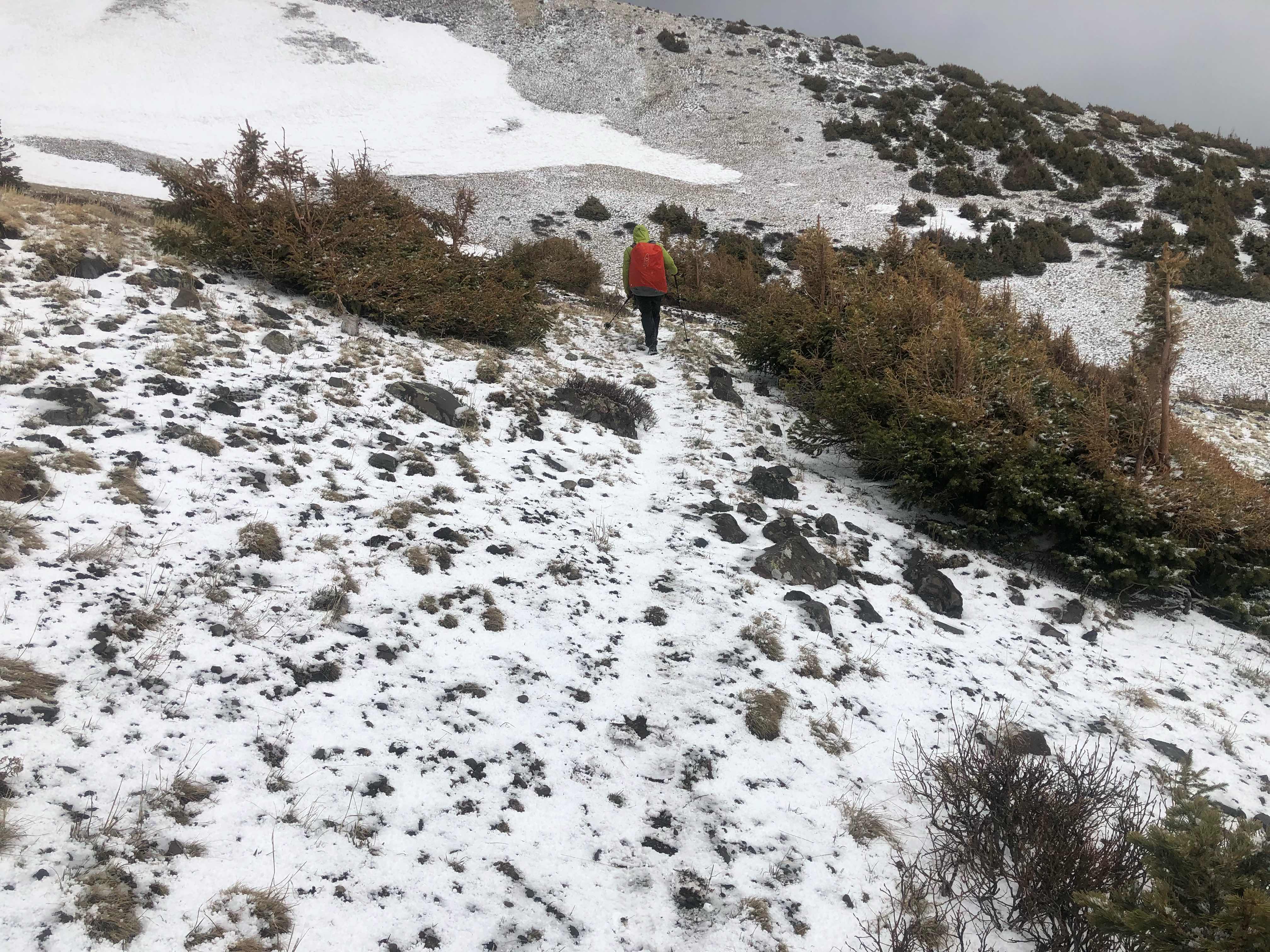 Fresh powder on the trail
The next part of the day was sheer terror and decision making time. We finally came to a slope that was very steep and very long. We were looking at a 2 mile traverse across some nasty looking stuff. Mangas has been a backcountry skier for thirty years. He said that what we were about to do scared the shit out of him. Not exactly what I wanted to hear. We looked at all of our maps and made a decision to get off of the ridge a different way. Without the proper safety equipment a slip meant certain death. The alternate route was not without its own risks. We had no idea if it was anymore safe, but we hoped that since it wasn’t a north face and not as steep we would be ok. As we were talking over our choices the sun came out and the weather improved. It would be a short reprieve, but it came at an opportune moment. 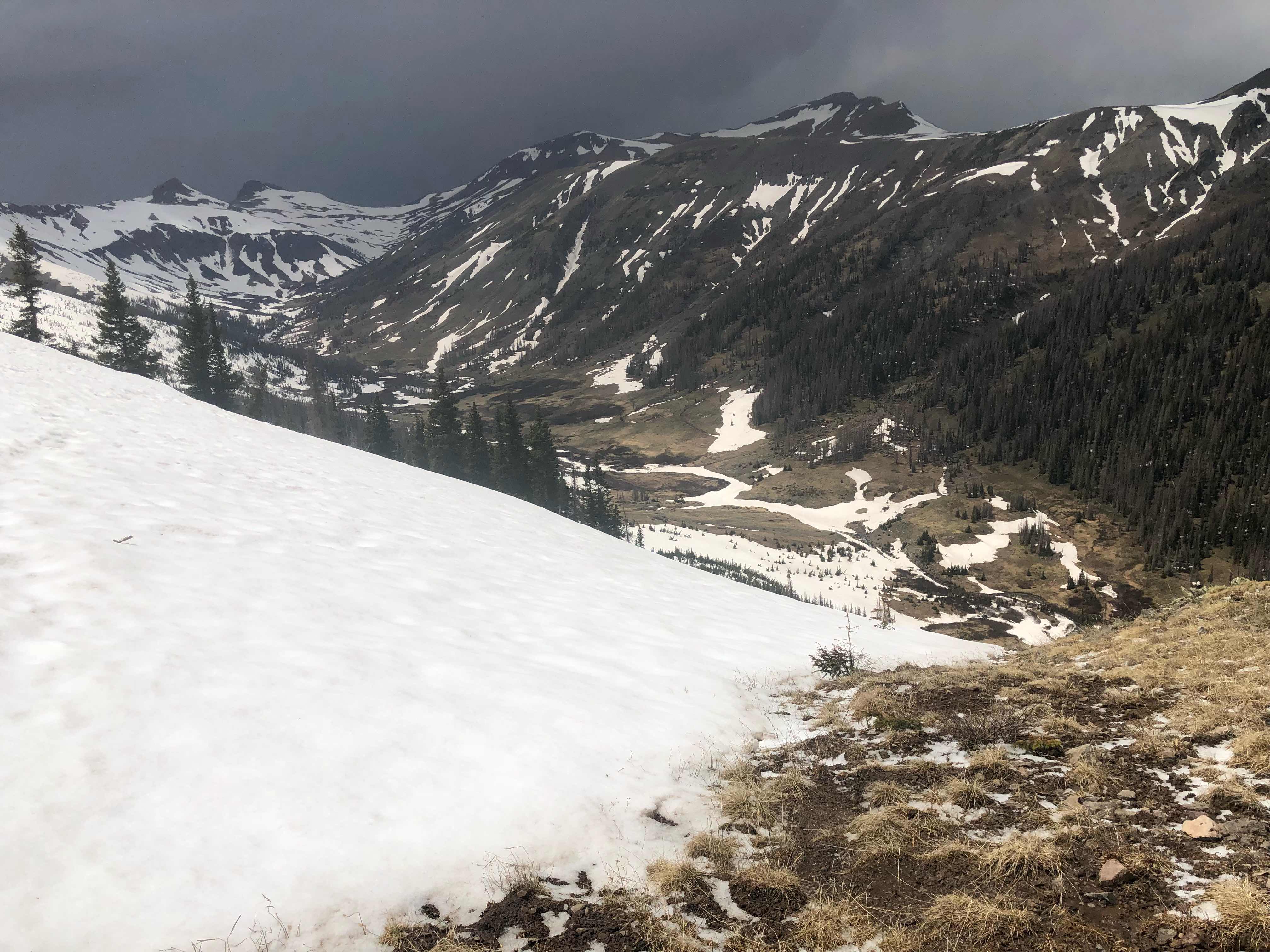 The drop off if we had continued and slipped. This went on for miles each bit looking worse than this
With Mangas taking the lead we made it down safely. I slipped and fell more times than I can count, but since it wasn’t a steep slope no harm was done. It took us almost 2.5 hours to make the detour and put us almost 3 miles off trail. The entire way down we postholed and had to deal with blowdowns. It was still better than the ridge of death. Just to be clear, it was not an impassable area. I just did not have the proper equipment to even think about trying. I’m not sure I would have tried it even if I did have the tools needed.
By the time we made it down it had started to storm again. The only difference was we were at a much lower elevation so it was rain and sleet. Within minutes I was soaked to the bone. We followed a river to get back to the trail. Just before making it back we made the decision to set up camp. We were going to be gaining elevation again and finding a place to camp seemed doubtful. It was almost impossible to find a place to camp were we were. This is the first time in a long time I’ve had to setup in the rain. I was frozen and my puffy jacket had gotten kind of wet. I’ve been using my rain gear at night to help stay warm and that won’t be an option tonight. Turtle had an extra baselayer he let me wear, but I still think tonight will be a rough one. 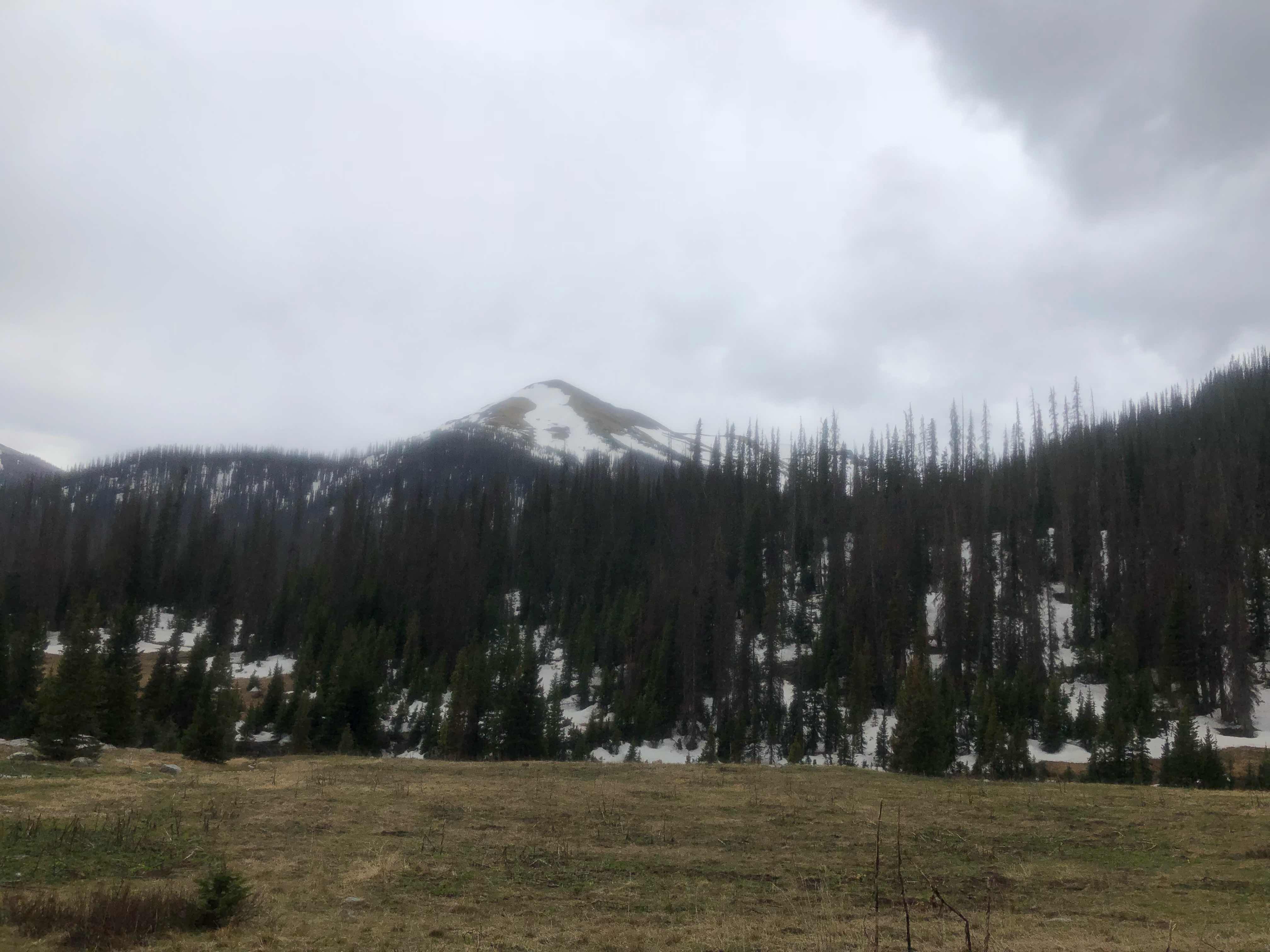 Slightly blurry picture of the ridge of death
I am more than ready to be done with the south San Juan mountains. I may have bitten off more than I can chew. I definitely underestimated this section. I’m currently thinking of taking an alternate after Pagosa Springs that will be a road walk around this section. I live in this area and can come back and hike this section when the weather and snow will be more forgiving. Here’s hoping we make it out alive to have that decision to make.
"Promise me you’ll always remember: You’re braver than you believe, and stronger than you seem, and smarter than you think."
- A. A. Milne