For the most part I don’t sleep as well in town as I do on the trail. Last night was no exception. I think it is the combination of lack of activity, cell phone service, and electricity. I was up until after midnight and did not sleep well. I woke up at 6:30 so that I could finish writing my blog, pack up, and eat breakfast before the nine o’clock shuttle back to the trailhead. I really enjoyed this town stop. It was fun because of the numerous hikers in town. I haven’t been around this many other hikers the entire trail. I really hit it off with a married couple from Tucson, Arizona, Piñata and Sour Straws. I went back to Jan’s Cafe for breakfast. I had a relatively small breakfast. I have finally learned not to stuff myself before heading back into the trail. It makes for uncomfortable hiking and I never eat all of the food I have planned for the day. I settled on two pieces of French toast and it was the perfect amount of food. About half of the hikers stayed in town to finish town chores and would take the later shuttle out. Sour Straws, Piñata, Anchor, Grasshopper, Cattywampus, Ice Man, and myself headed out at nine. We started hiking a little after nine thirty. 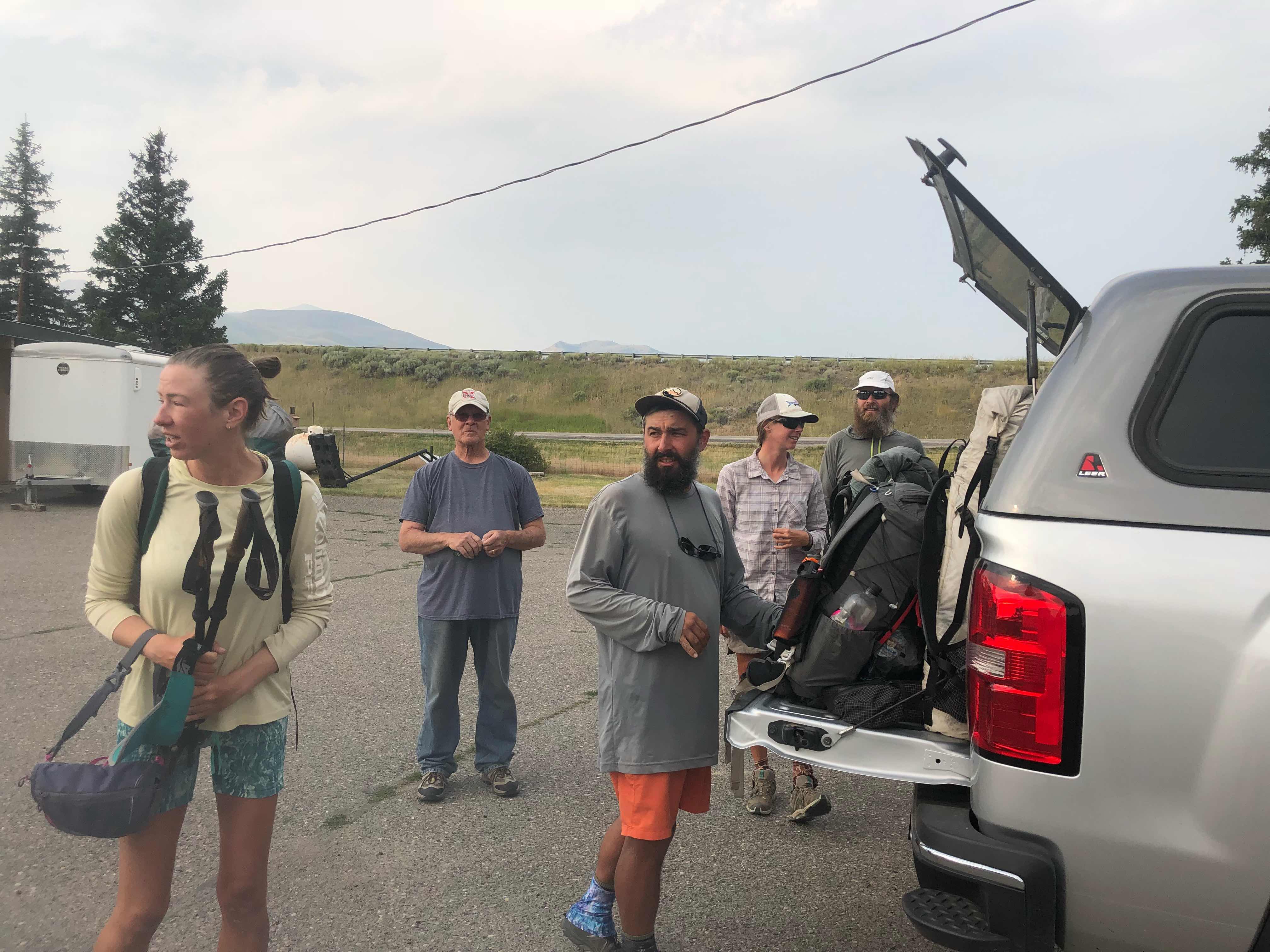 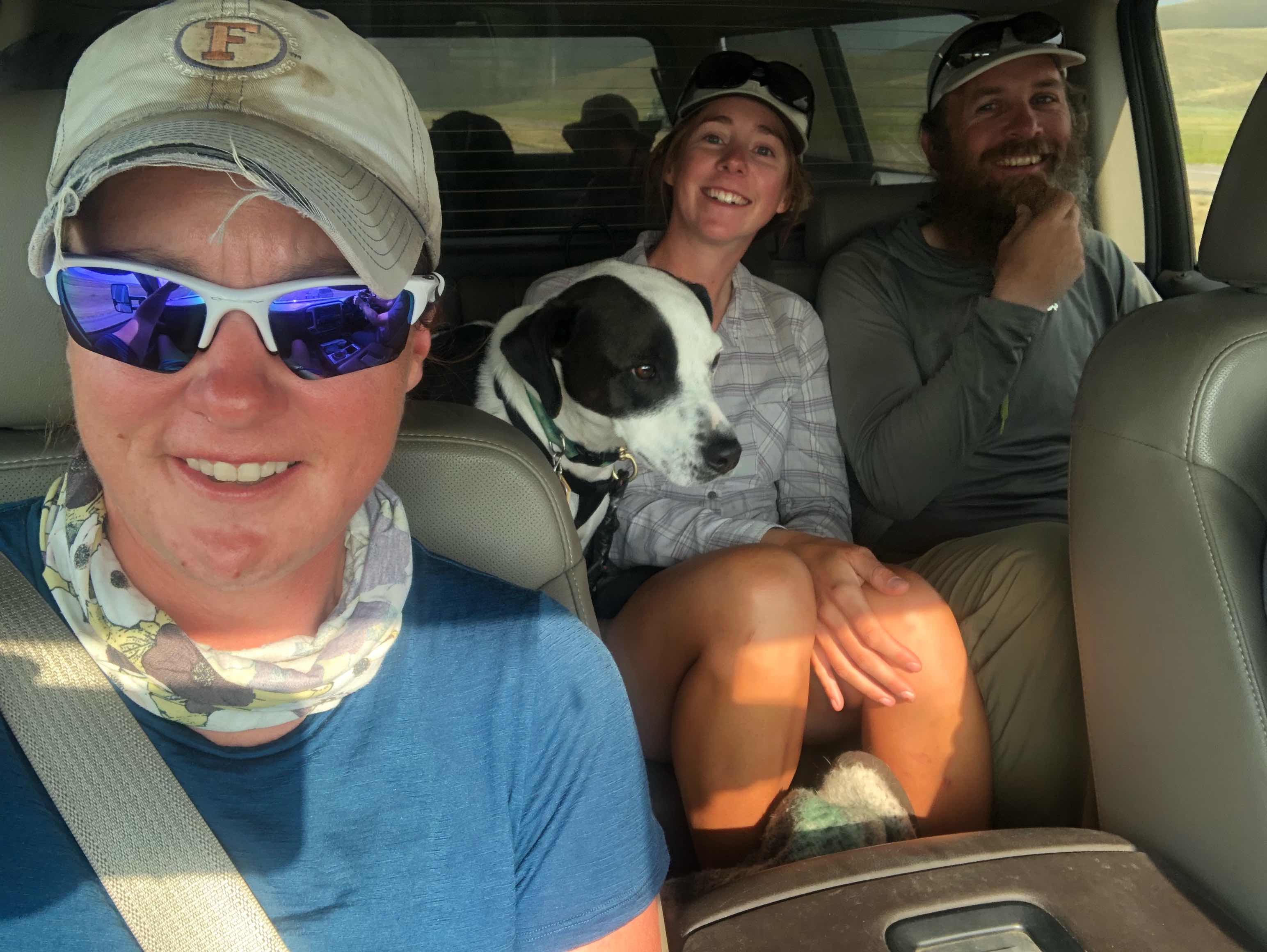 Bella, Cattywampus, and Iceman on the ride back to the trailhead
We all knew that today was going to be a tough one. Everyone hoped to make it 25 miles to a good campsite that had water. I’m not sure anyone actually expected to go that far with the late start, but that was the plan. I was kind of the odd one out. Everyone else knew each other or had their own hiking partner. I was the new one to the group. Sour Straws, Piñata, and I seemed to be doing the same mileage so I decided to hike with them for a little while. What made today so difficult was it was a roller coaster day hiking along the Continental divide. Most of the day was spent hiking up and down 200-400 feet along rolling hills. The maps actually described it as a roller coaster. I had a day like that on the AT and did not like it at all. For over sixteen miles we went up, then down, back up, then down again. To make matters even more interesting most of the day was spent on the edge of a storm, with very high winds. All I could think of as we repeated the same thing over and over again was the instructions on a shampoo bottle; wash, rinse, repeat. Up, down, repeat. Today was a very good day for hiking in a group. I enjoyed the conversation and it was a great distraction from the monotony. 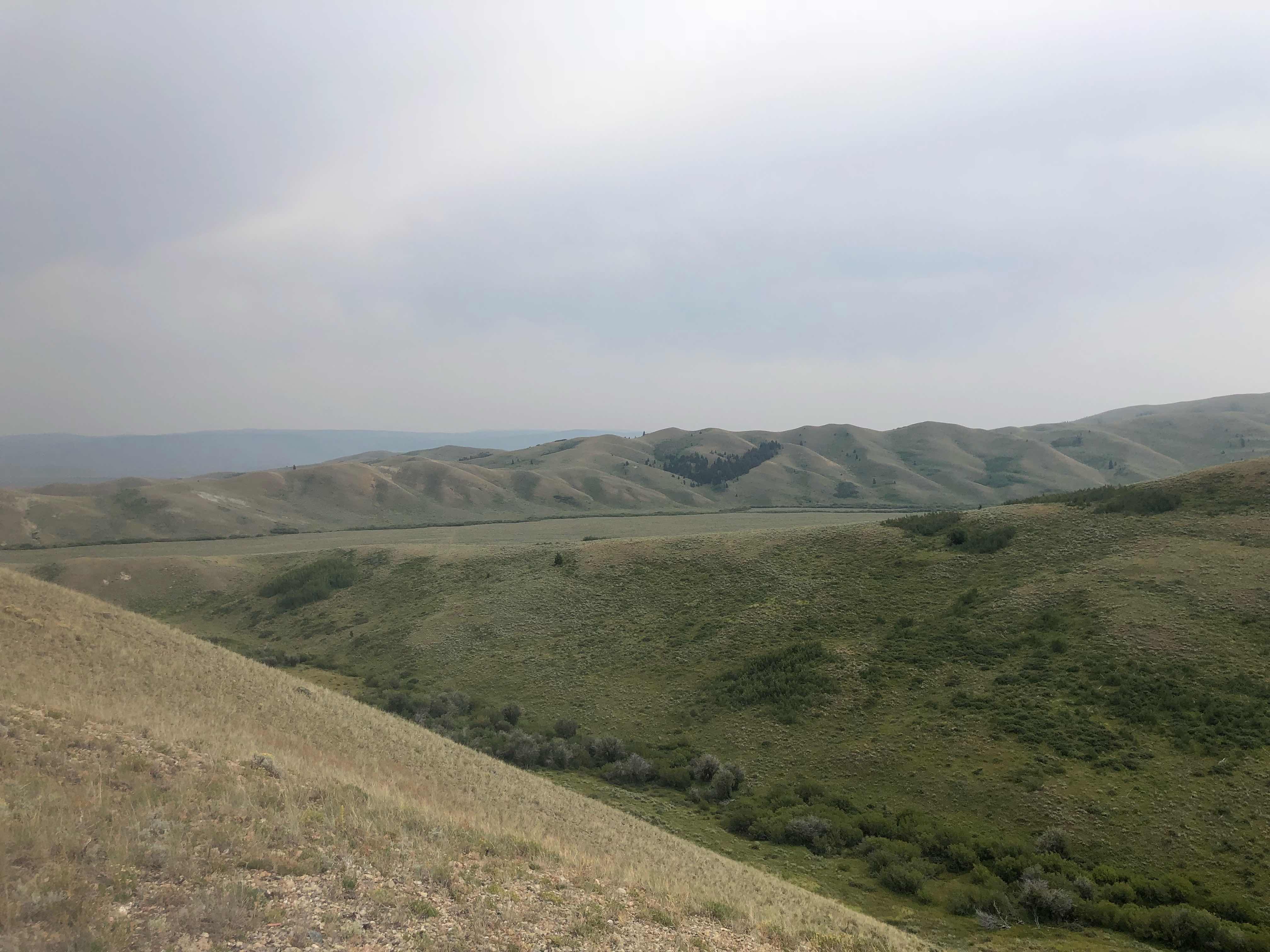 The hilly ridge we walked all day 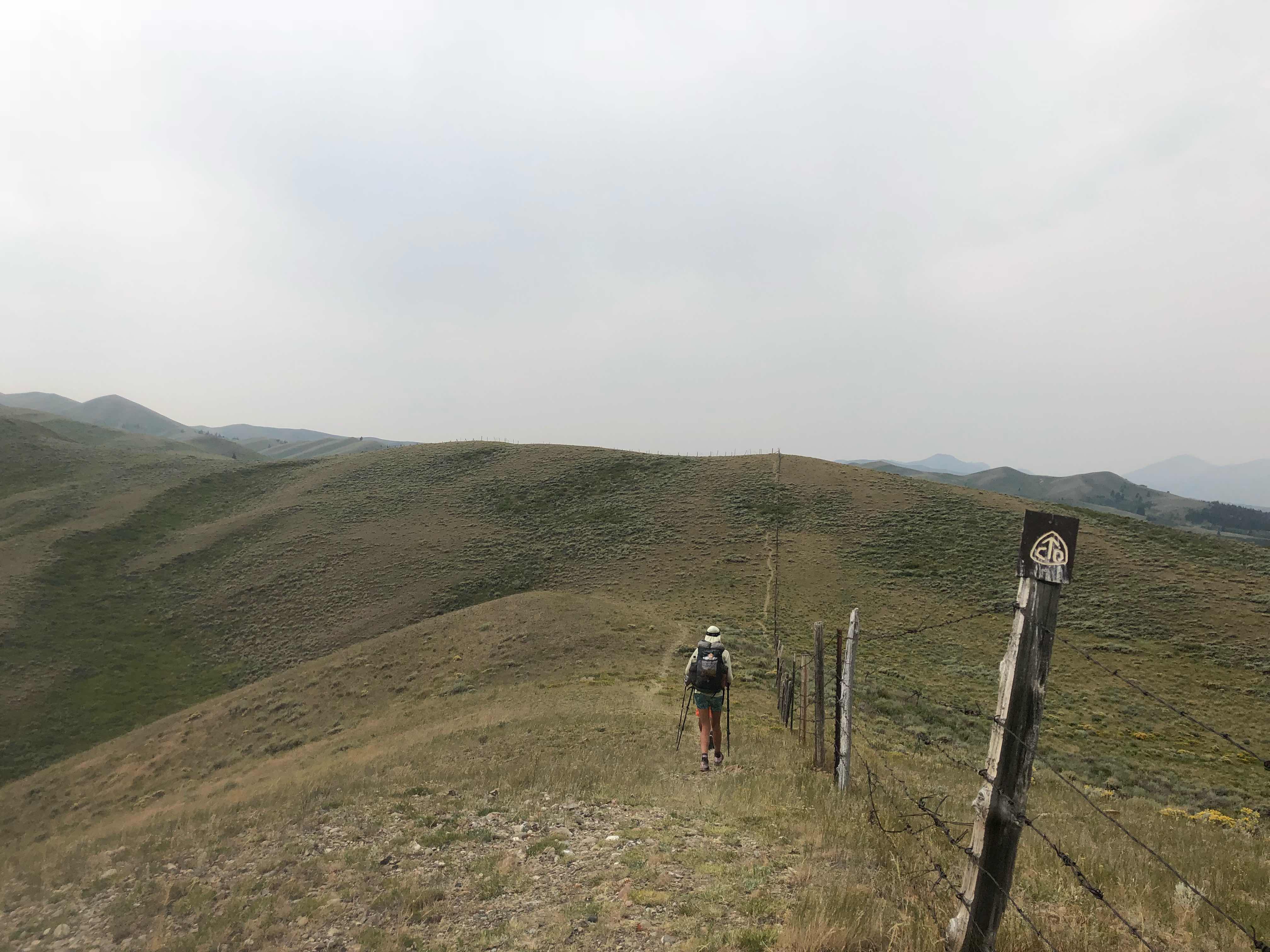 Sour Straws making her way down before going immediately back up 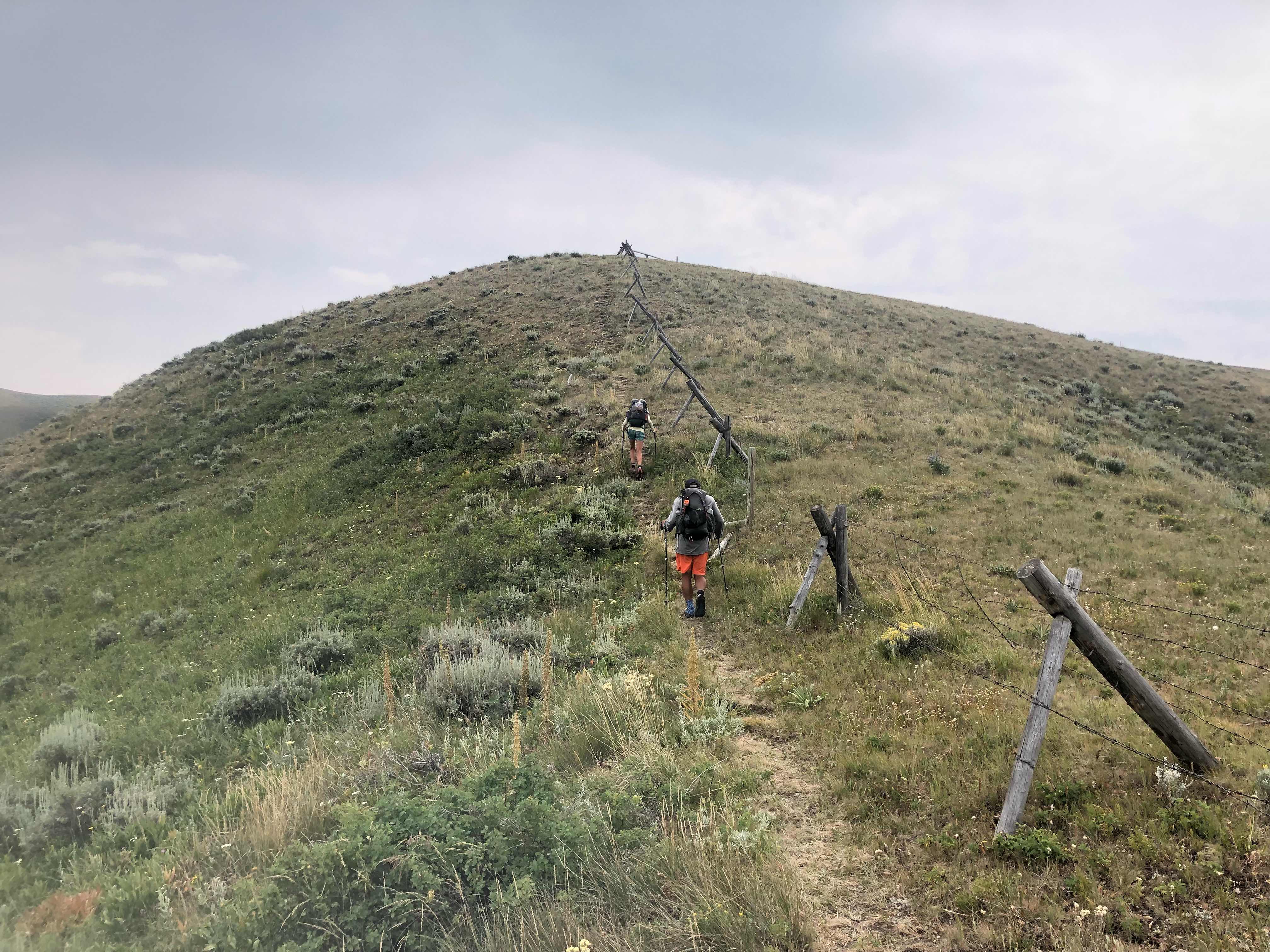 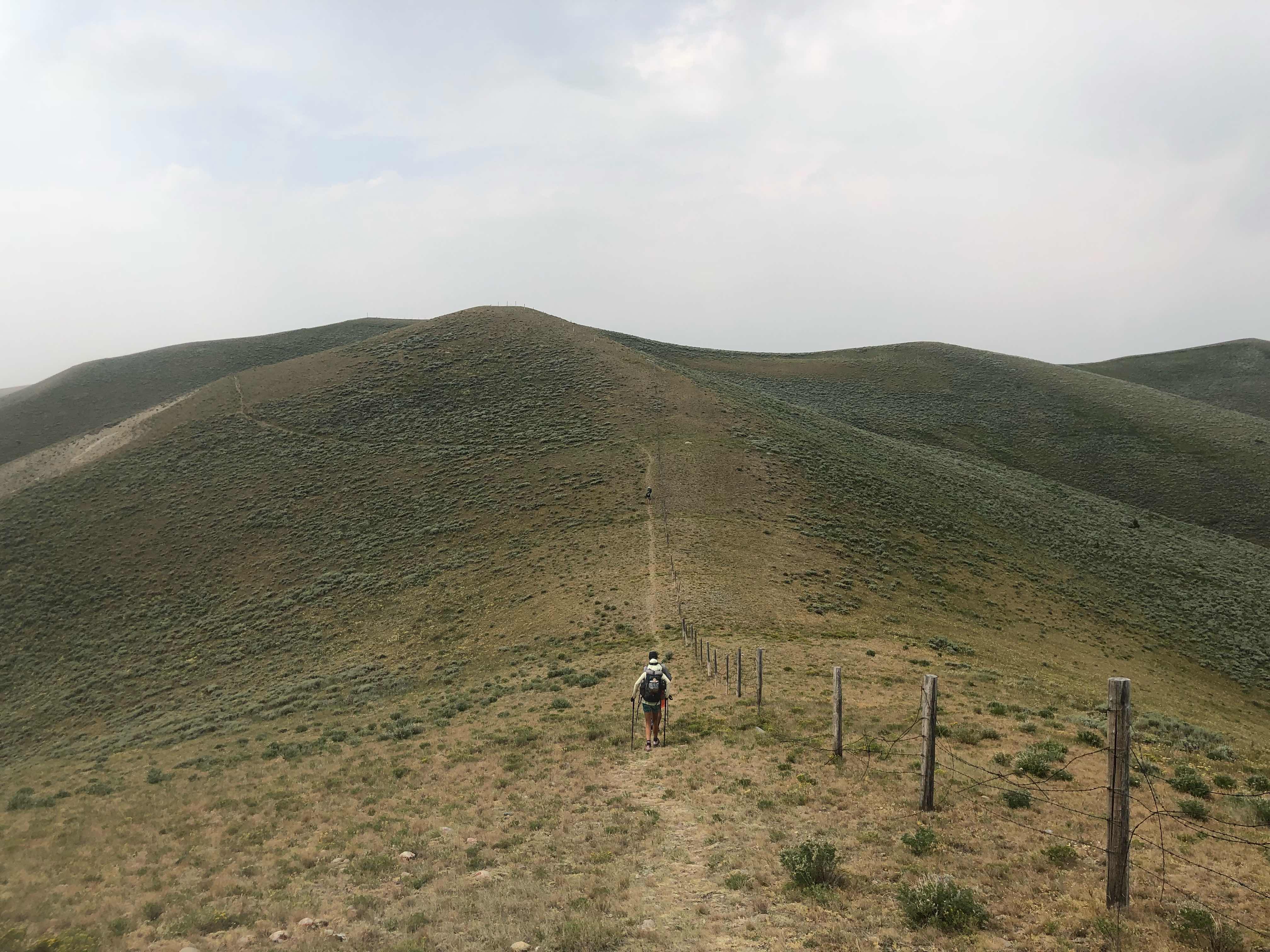 Over and over again 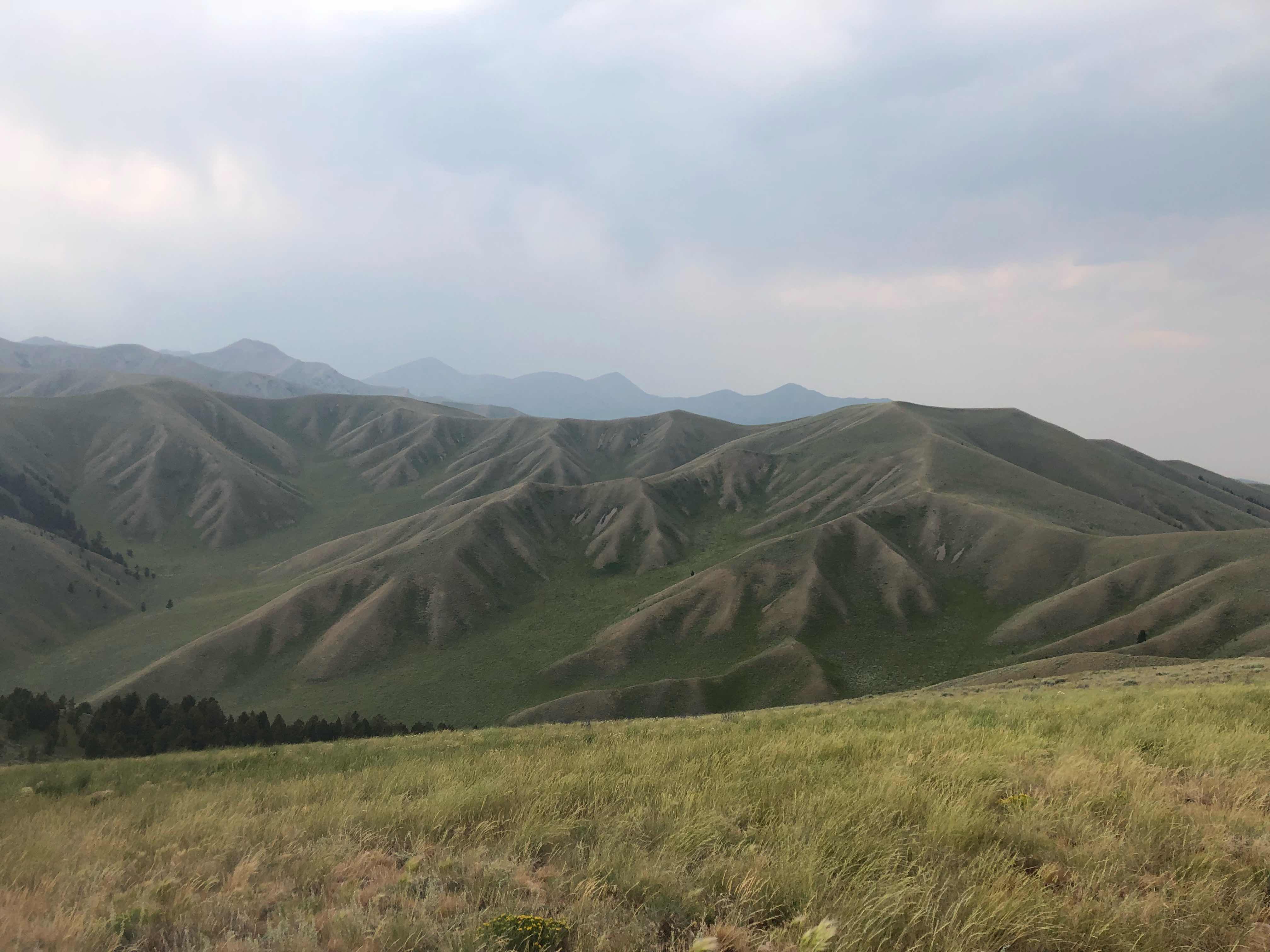 Cool looking terrain part storm, part smoke in the sky
The day simultaneously went by slow and quick. The miles seemed to drag on, but we made good progress. Conversation would come to s complete standstill on the steeper ups and would resume where it had left off on the downs. We took very few breaks and just powered through. Hiking with other people made it easier to embrace the brutality. As it got closer to my usual stopping time I realized that today would be longer than usual. I like to stop around eight or eight thirty at the latest. To get our miles in we had to go until almost nine o’clock. Water was a slight issue today. Luckily the weather was windy and stormy. If it hadn’t been for the cloud cover and wind today would have been a lot worse. I thought I would be able to skip an off trail water source and was carrying enough water to skip it. Even with the cooler weather my water disappeared faster than I thought it would. I had to hit up the off trail source. I was only .2mikes off trail, but it was downhill, which meant I would then have to come back up. That was probably our longest break and it definitely wasn’t relaxing. Oh, the things I will and won’t do for water. Towards the end of the day we passed by lots of streams and creeks. Unfortunately most of these sources have been reduced to large muddy, cowshit filled streams. I was suddenly glad I went off trail for fresh non cow polluted water. We skipped all of the cow sources and found good water close to camp. 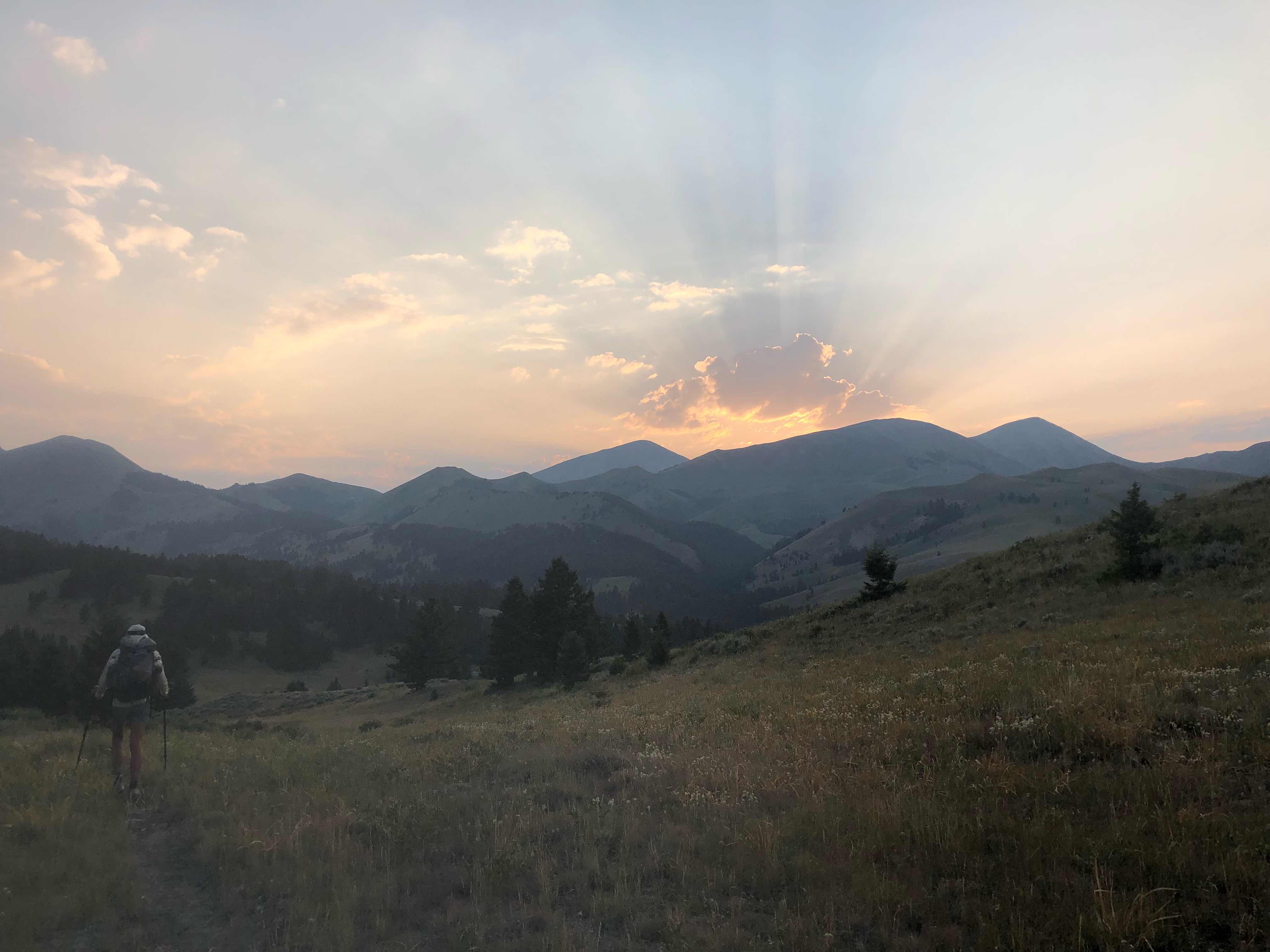 Sun rapidly disappearing
Cattywampus, Iceman, Anchor, and Grasshopper stopped a few tenths of a mile before us. Our friend Z told us of s nice protected spot s little farther away. By the time we stopped to set up camp, the sun had disappeared behind the ridge line. Since I’m in cattle country I’m not as worried about bears. I set up a cowboy camp and quickly cooked dinner. Sour Straws and Piñata set up their tent close by. We had a great view for dinner and even better conversation. I didn’t get to bed until almost ten. It is now almost eleven and tomorrow will be another tough day on the divide. There aren’t very many easy days out here. 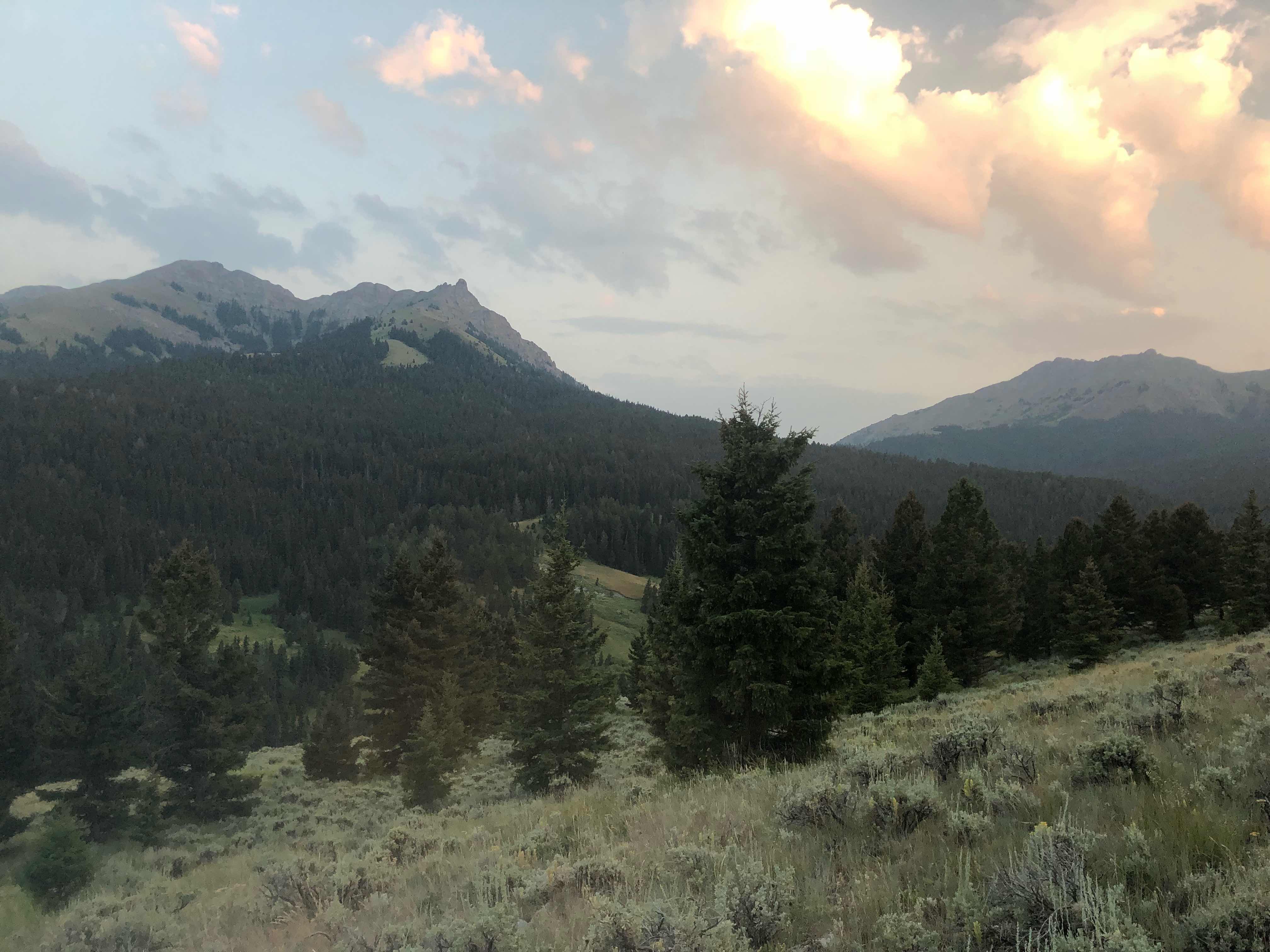 Dinner with a view 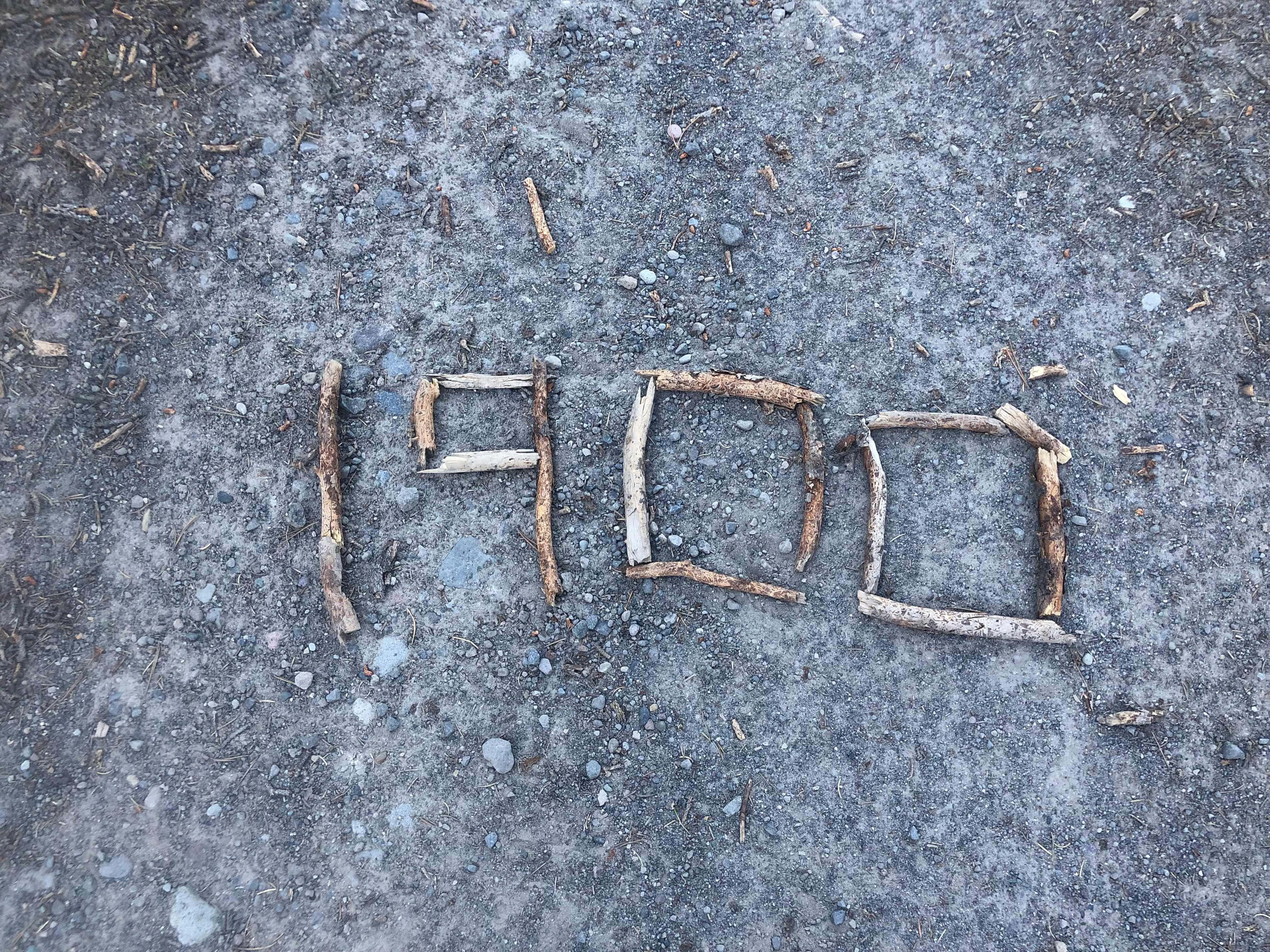 “Hope is important because it can make the present moment less difficult to bear. If we believe that tomorrow will be better, we can bear a hardship today.”
- Thich Nhat Hanh