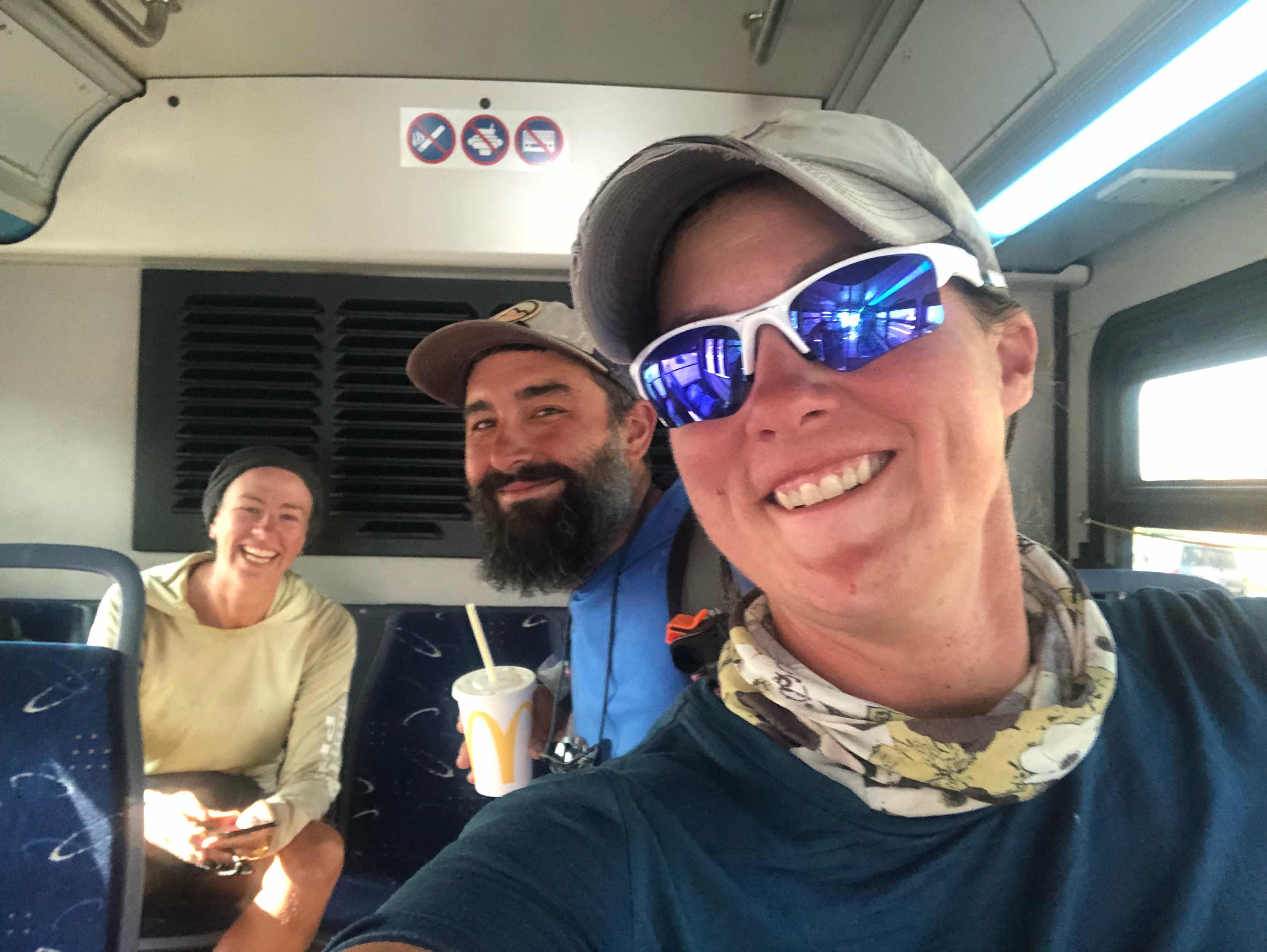 I slept extremely well last night, which was surprising since I was camped 25 yards from a highway. The big mile days have really begun to catch up to me. As soon as there was enough light out to be seen by the passing cars Enigma left to walk into town. Piñata, Straws, and I took the time to actually have hot coffee before leaving camp. The walk into town went by pretty quickly. We stopped at a convenience store for coffee and donuts. Then we stopped by Walmart so I could pick up a Sawyer Mini water filter. I have been drinking all of my water before reaching the next source. Having to wait 30 minutes for my water to purify has been difficult. I wanted the option of being able to drink a little water right away. The Sawyer mini is pretty light weight and inexpensive. The recent water sources also haven’t been the greatest. Carrying the Sawyer gives me more flexibility on where I can get water from. Using only bleach I only feel comfortable getting water from fast moving streams and creeks. We have been coming across those less often. As I was leaving Walmart I found Enigma walking around the store.
After my quick Walmart stop we walked about a mile to McDonalds. We had a quick snack, what I used to consider a full meal, and came up with a plan for the rest of the day. Butte is very spread out and we needed to come up with the best plan to accomplish all of our chores with the least amount of walking. Once we started planning we discovered that the town had a free bus system. We utilized the bus to get to a laundromat. We needed to wash our clothes first so that we could trade in our Darn Tough socks for new one at the local outfitter. Darn Toughs lifetime warranty is the main reason I am such a loyal customer. Both of my pairs had holes in them, so I was able to get two brand new pairs. After laundry and the outfitter we walked to the post office so that I could pick up my new shoes I ordered off of Amazon. Thanks Chris Morris for the Amazon gift card. My old pair of shoes lasted about 775 miles. They probably had another 100 miles left in them, but I didn’t want to risk it. 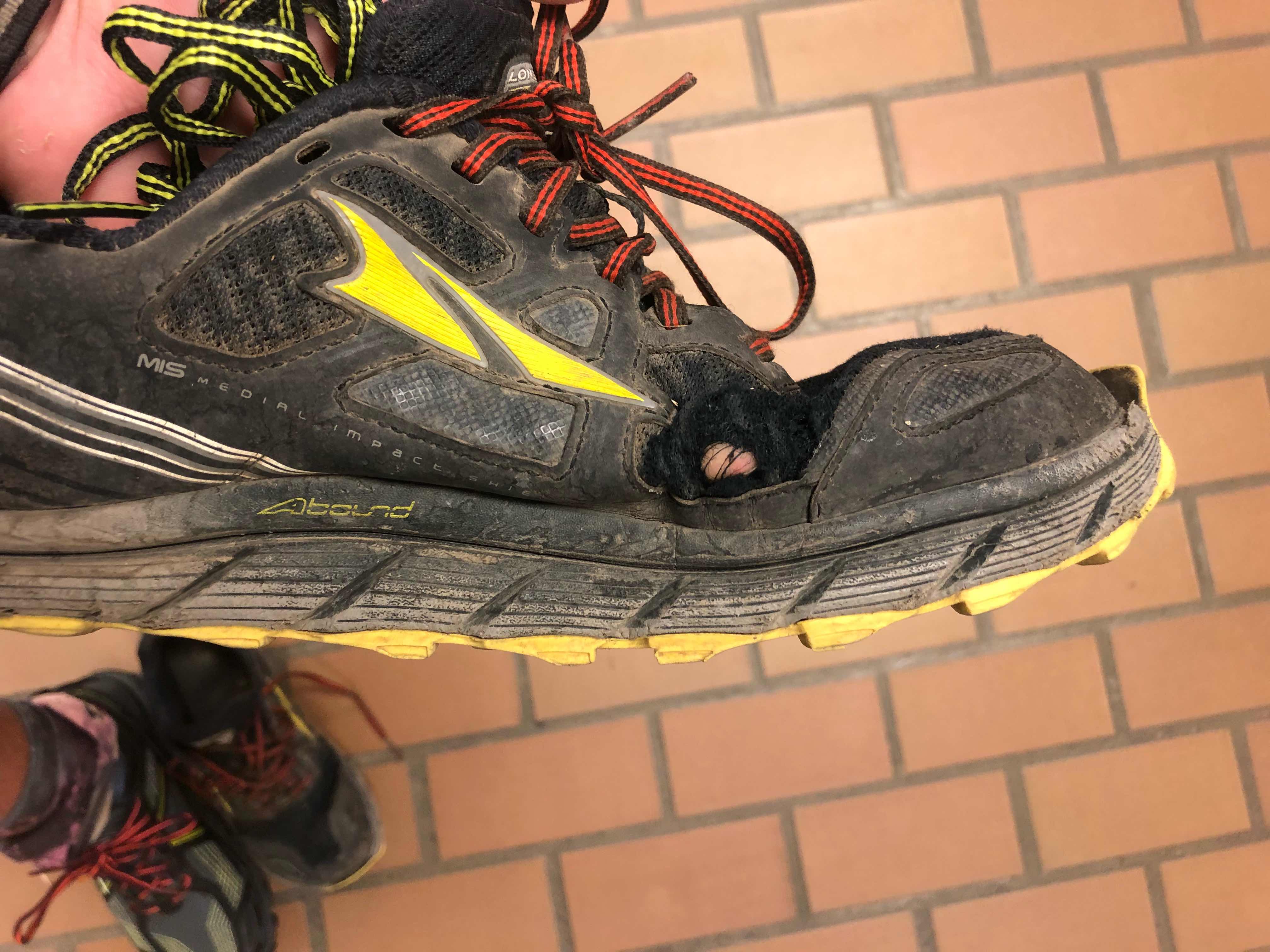 Holes starting in the old Altra Lone Peak 3.0’s
We ran into two hikers at the P.O., Clammy and Earl Gray. I met Earl Grey around day three in New Mexico. They had to skip around three fires. We were very lucky to have made it through the last section just in time. We had planned on going to the YMCA to shower, but decided to skip that chore. We were all getting hungry so we walked to an all you can eat pizza buffet. Pizza Ranch had everything a starving thruhiker could ever want, electrical outlets, soda, coffee, numerous pizza selections, fried chicken, fries, salads, and soft serve ice cream. We stayed there for almost five hours. Other than eating an obscene amount of food during that time we needed to charge all of our electronics. Our battery packs take the longest to charge. Mine usually needs anywhere from 4-8 hours to fully charge. 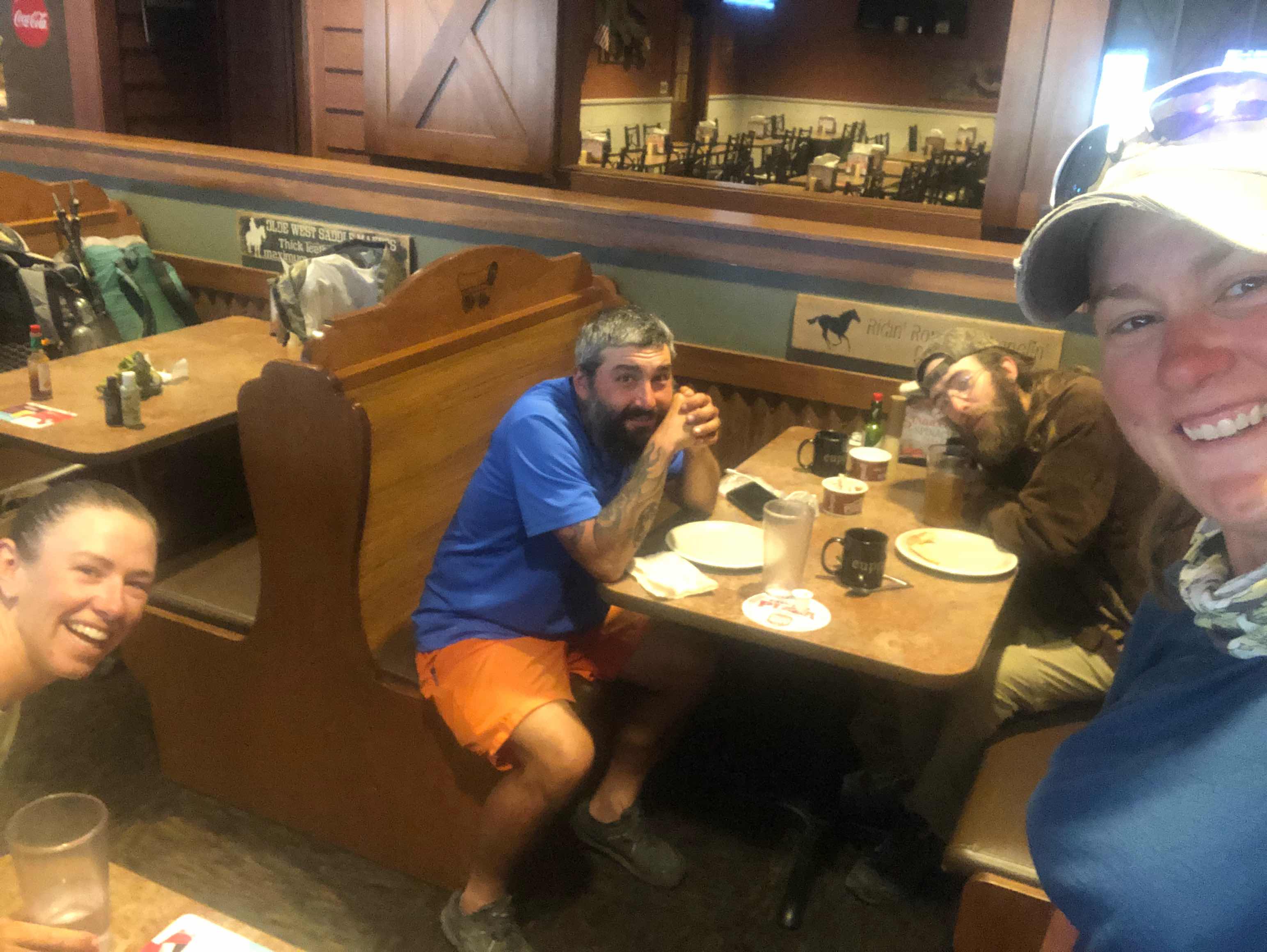 Pizza Ranch
I took a wet towel hobo bath in the restroom. I found a faucet outside to wash my feet really well. By 5:30 I was ready to do my resupply so that we could get out of town. When I came back inside after washing my feet the boys both had shit-eating grins on their faces. Straws and I asked them what was up. They had been talking and were thinking that we should just stay in town for the night. I was more than a little surprised. They were the main instigators for hiking in and out. I was immediately on board and so was Straws. Phone calls were made and we found a hotel in town to share.
We walked back to Walmart and finished our resupply. I didn’t feel like walking over two miles to the hotel carrying my groceries, so I called us an Uber. By seven o’clock we were all cleaned up and glued to our phones. We all stayed up late staring at our phones. I downloaded a few new podcasts, books, and music. It was a very fulfilling town day and I feel great about our decision to stay in town. I especially enjoyed lounging around an AYCE pizza buffet for most of the days. I was really behind on calories and I felt completely satisfied for the first time in a long time. 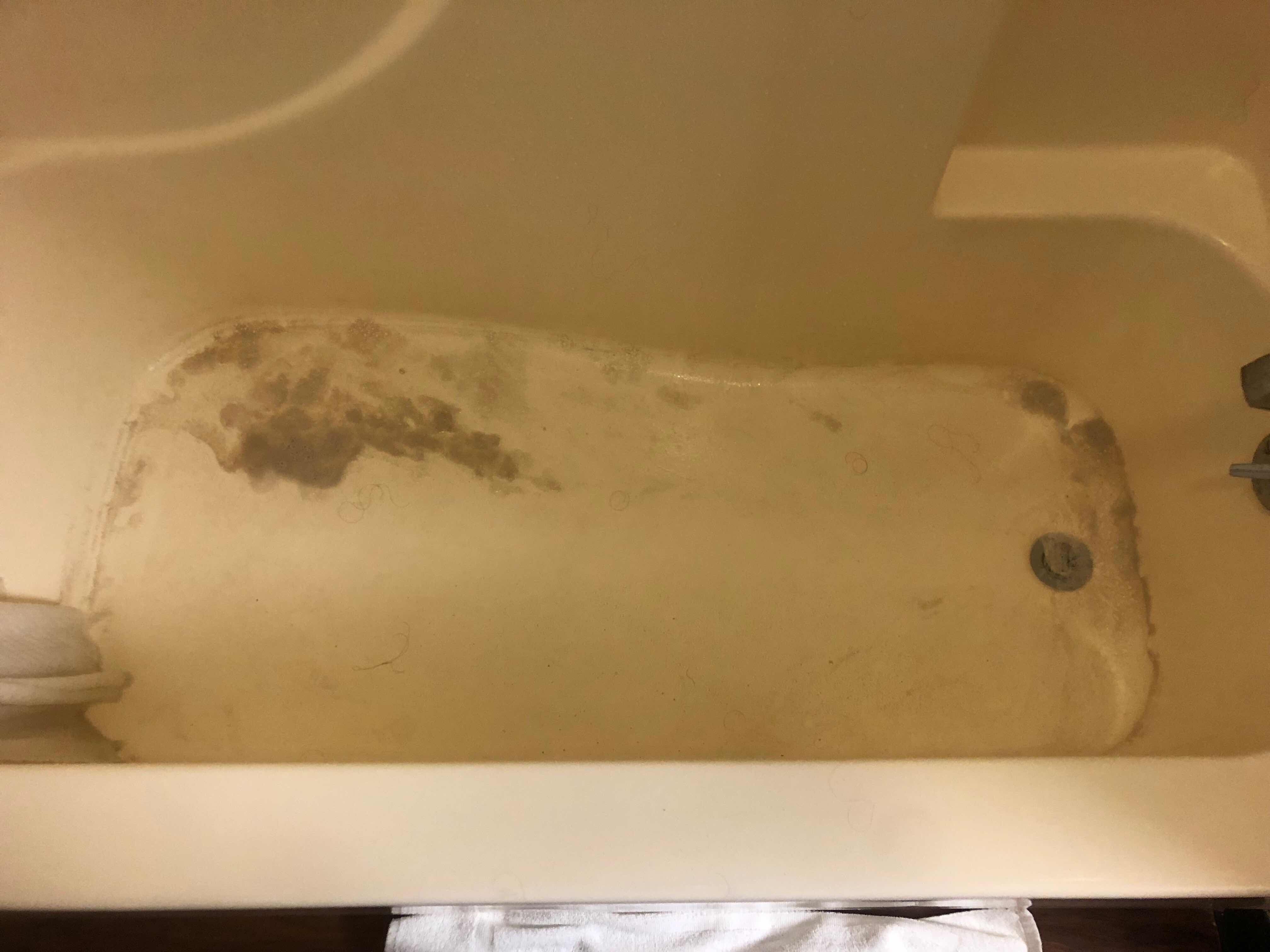 Tiny bit of dirt left in the bathtub after my shower
“The measure of a man is the way he bears up under misfortune.”
- Peter Nivio Zarlenga