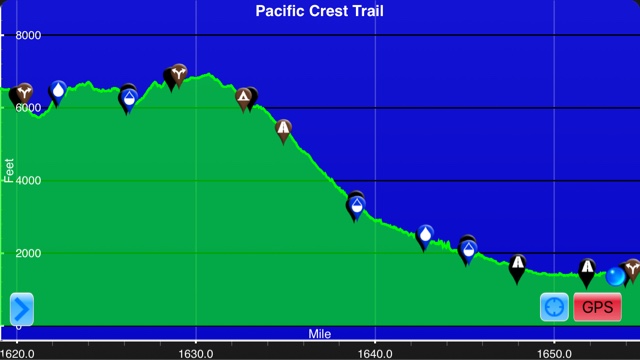 Total up/down: +4435/-8792 feet
So I have been a bad blogger the last few days. I have gotten behind writing my blog. I blame the Perseid meteor shower and getting into the last two towns late. I was way behind on sleep and just couldn't stay up late writing. I apologize and will do my best to remember the details of this day, but I am writing this four days after hiking it.
I didn't sleep well last night, between ants crawling over me and deer tromping through my campsite it was a restless evening. My hopes and dreams for the day are to hike into Seiad Valley tonight. I have to push for there today due to logistics. Leaving Seiad Valley can only be done in the early morning hours or by night hiking. There is a five thousand foot climb over eight miles that is brutally hot(over 100 degrees when the sun is out) and I would rather tackle that in the morning than at night. If I hike into Seiad in the morning I would be forced to sit around in the heat all day waiting to hike. I also need to make it there by eight o'clock to pick up my resupply package before the store closes. Ideally I would have gotten out of camp a little earlier to make this a little easier on myself, but I do like a challenge. 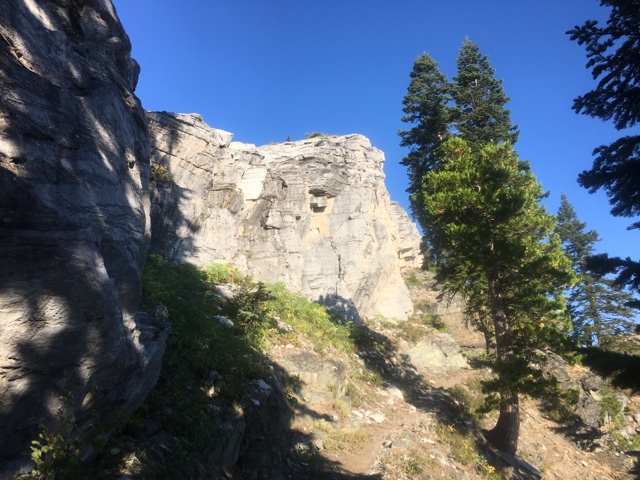 Great shot of the Marble Mountains
I spent the first ten miles of the day hiking small 200-300 foot elevation gains. It didn't cool down very much last night and as a result it was pretty hot very early. The first half of the day was hiking through exposed areas with indications of a recent forest fire. 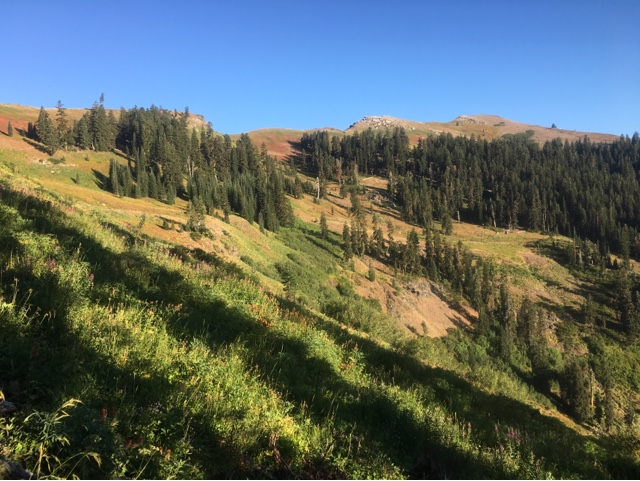 A tiny bit of shade 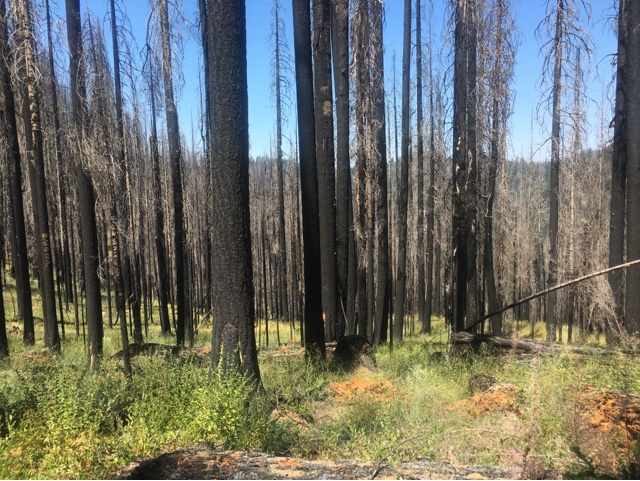 Older burn area
Just in time for my first break of the day I came to a nice shades campsite. Someone had place logs into the perfect arrangement for sitting. There was an ice cold spring close by too. I probably took too long of a break there. 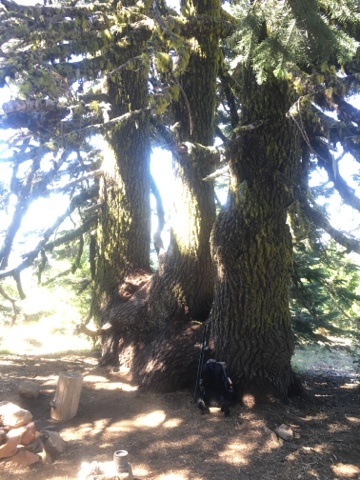 Cool tree. One large base with three separate tree trunks
I spent the rest of the day going down hill. It wasn't as bad as the elevation profile makes it look. I followed the contours of the mountains. Most of the time it was such a gradual grade I could hardly notice that I was losing massive amounts of elevation. There were tons of small streams and I crossed a river four different times. Water was not a problem and I was hiking in the shade. Yes, much better than I had expected. 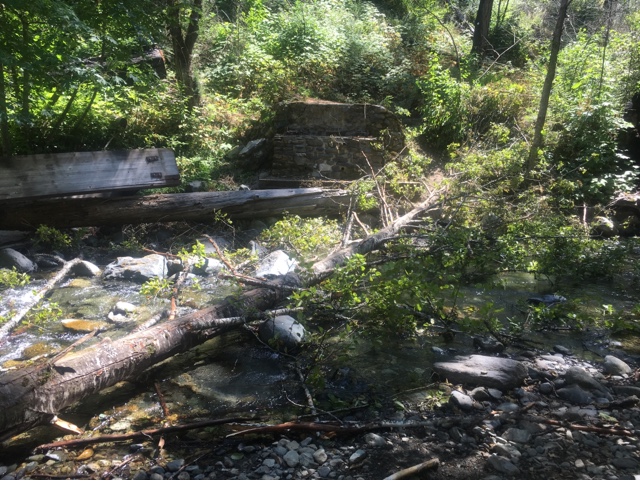 I even had a log crossing
The worst part of the day was the remaining six and a half miles, it was a nasty little road walk. Most of it was an old paved road that shredded more poor feet. The only plus side to the entire road walk was there were wild blackberries everywhere. I picked half of a quart to enjoy with some ice cream once I made it into town. 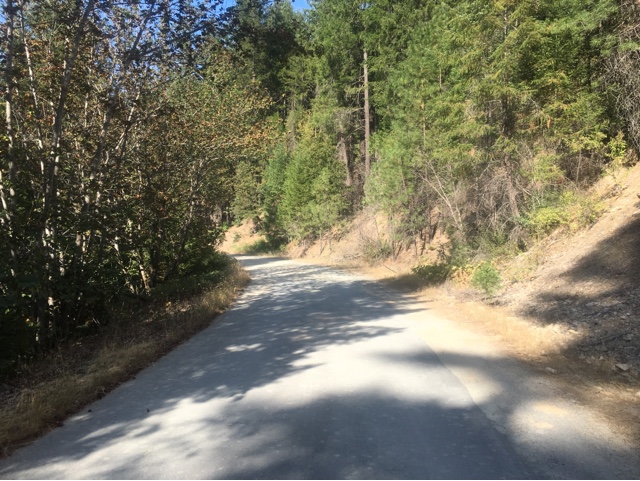 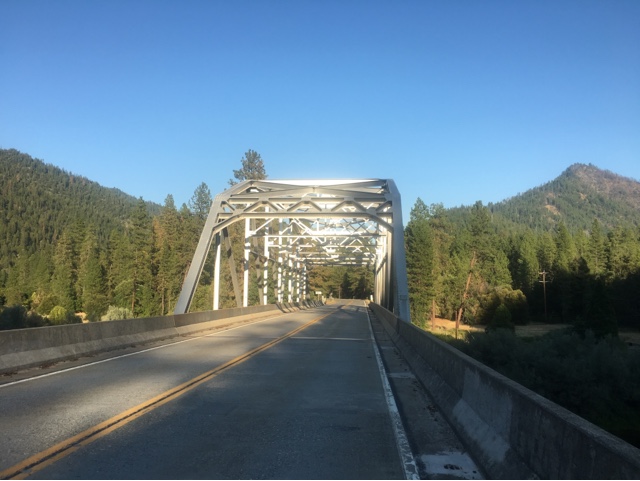 Bridge over the Klamath River
I made it into town a little after seven o'clock. I treated myself to an Arizona Iced Tea, a Gatorade, and some chocolate milk. I also got a pint of vanilla ice cream and added my berries to it. What a great way to end the day. I camped at an RV park. I wasn't to happy to pay fifteen dollars to camp, put getting to take a shower and do my laundry helped to ease the sting. It was another late night. By the time I sorted my resupply, showered, did laundry, cooked and ate dinner, it was after eleven o'clock. I did not get any writing done tonight. Like I said earlier... bad blogger.
The plan is to wake up at four thirty and start hiking by five thirty.
"There are realities we all share, regardless of our nationality, language, or individual tastes. As we need food, so do we need emotional nourishment: love, kindness, appreciation, and support from others."
- Swami Kriyananda
Posted by Yoda at 11:35 AM