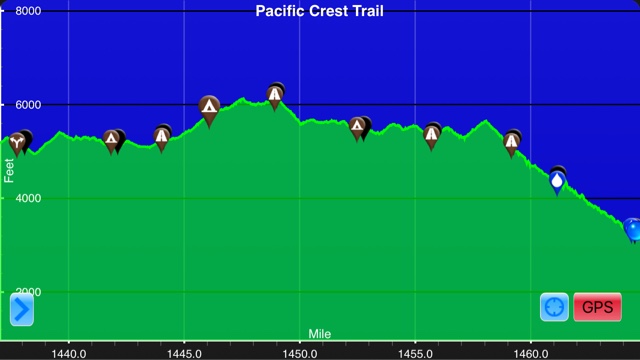 Total up/down: +4272/-6085
Some days are more difficult to write about than others. This is one of those days. Not everyday can be amazingly beautiful and action packed. I like to think of days like this as a filler day. It is like your favorite tv show, not every episode is going to be an award winning episode. To fill out an entire 12 episode season there are bound to be filler episodes that don't really move the plot forward. I'm not sure if that makes any sense, but in my mind it is a great analogy.
I woke up this morning to discover that somebody else had camped right next to me. They must have shown up in the middle of the night. It is a little disturbing to me that I didn't wake up at all. They must have been ninja quiet. I tried to return the favor by being extra quiet when I packed up my stuff, but everything I own seems to be extra crinkley. Imagine trying to open a bag of potato chips without making a sound and you'll get the picture. I'm not sure how it is possible, but the random person didn't even stir.
I spent the day walking through the forest, following the contours of the mountains. I didn't realize how much I missed hiking through a forest until today. It was much cooler temperature wise and everything seems more peaceful. The only real problem I had was most of my water sources early in the day were located off of the trail again. 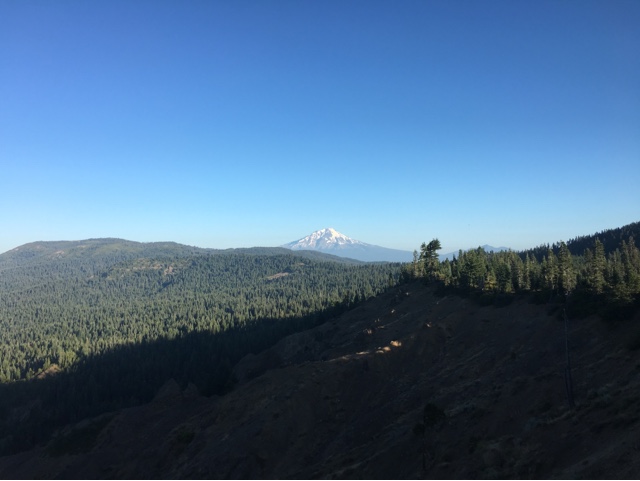 Lush forests with Mt. Shasta visible
I took my first break earlier I than my new normal. I stopped because this water source was the closest to the trail than the other sources would be. The trail has been extremely dusty lately and my feet have not been reacting well. The water source was a very fast moving ice cold stream. I took the opportunity to put on clean socks and to rinse out my dirty ones. A few days ago I switched to a new water filtration system. I have really liked using the Sawyer Squeeze filter. I used it on the AT and for this entire trip. It is really light weight, only 3 ounces, but it is extremely tedious. After collecting water I have to squeeze it through the filter. It is time consuming and I'm completely over the whole thing. I decided that I would switch to using bleach. I have not done this before because I was concerned about putting more chemicals into my body(I use a lot of DEET). Upon further review bleach seems like a perfectly natural substitute. Most municipal water treatment plants use chlorine to purify our drinking water. Chlorine is the active ingredient in bleach. So far it has been working out well. The water tastes just as good as when I used the Sawyer filter. The only downside is that if I'm not careful collecting the water I get some floaties in it. The water sources lately have all been clean and not gross. I still have the Sawyer as a backup, but if the new system continues to work I'll send the Sawyer home.
Once my socks were clean and I had filled up my bottles I continued on. I have been seeing less and less hikers everyday. A lot of people have jumped farther north so they can finish the trail before the weather turns bad. At this point I'm feeling pretty confident that I won't have to resort to that. I am actually ahead of the schedule I set for myself in Tahoe.
Every once in awhile the trail would come out into the open. There were very few exposed sections today. The few that I hiked through gave me a nice clear view of Mount Shasta. It is a beautiful mountain. I had cell service for a brief period of time. I took the opportunity to look up Mt. Shasta. What I read was interesting. It is the fifth highest peak in California and the second highest in the Cascades. I also learned that, apparently, I am now in the Cascades. Who knew? Mt. Shasta is a potentially active volcano and the 96th most prominent peak in the world. It's elevation is 14,179 feet tall, with a prominence of 9,722 feet. 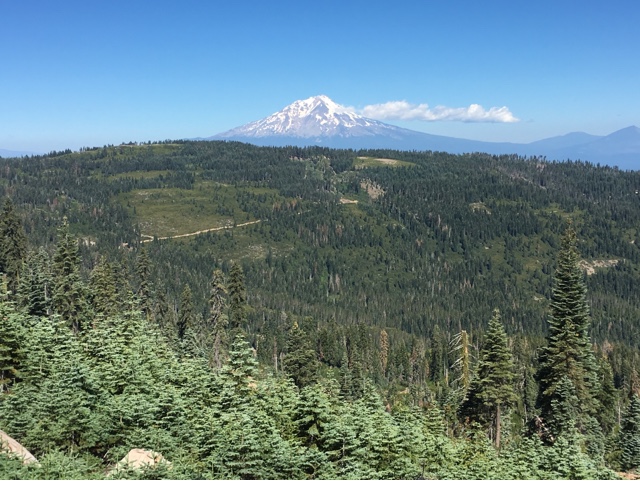 Shasta
I told you that today was a filler episode lol! The rest of the day went by slowly. I had the song, She'll Be Comin Round The Mountain, stuck in my head. All I seemed to be doing was walking around the mountain. Just as I started getting really bored and thought about putting some music on I rounded a corner and heard a noise on the slope above me. I looked up to see a bear twenty feet away. I have decided to name this bear, Honey Badger, because he did not give a shit. I hooted and hollared at him to scare him away and he just kept on digging for bugs. After a little while I finally got him to move along, unfortunately, he followed the curve of the trail. He had the high ground on me. As I walked along the trail, he kept popping out above me. It wasn't menacing though. He was just foraging for food and had the misfortune of going the wrong direction. I'm sure he was annoyed that I was ruining his dinner time. It was a pretty cool bear encounter. 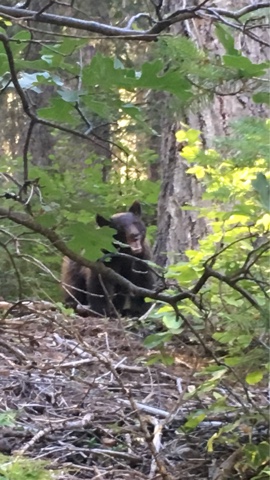 Honey Badger the bear
A few miles later I made it to a nice creek with a few deep pools. I decided to set up camp close by. It was the earliest I have set up camp in over a week. I could have gone another four miles before dark and camped at a campground, but my feet were really sore. I decided to listen to my body and not push it any farther. I have been asking a lot of my muscles, tendons, and ligaments for the last two weeks. My body was saying, woah enough is enough. I was smart enough to listen. As I was setting up camp two deer made themselves known. I could not scare them away either. It looks like I'll have them roaming around me all night long. After I set up camp I went down to the creek. I washed my socks, collected water, and soaked my feet and legs in the ice cold water. It felt amazingly good, plus it was nice to wash off all of the dirt and grime from the last one hundred miles. It feels so much better to go to bed clean.
"Our own worst enemy cannot harm us as much as our unwise thoughts. No one can help us as much as our own compassionate thoughts.”
-Buddha
Posted by Yoda at 11:10 PM