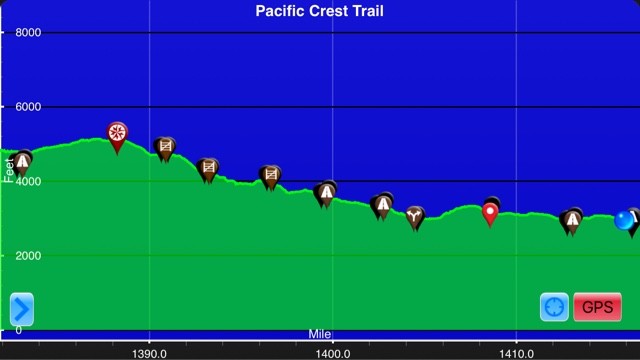 Total up/down: +1251/-3082 feet
When I woke up this morning I definitely didn't plan on hiking thirty three miles. I didn't really have a plan at all. Once again I overslept. I have been doing this a lot lately. I guess the late nights and long hiking days are catching up to me. I didn't get on the trail until almost seven o'clock. I was concerned that it might rain today. The sky was really cloudy, but as I began to hike the clouds began to break up. They looked like cotton floating lazily across the blue sky. It made for some awesome pictures. 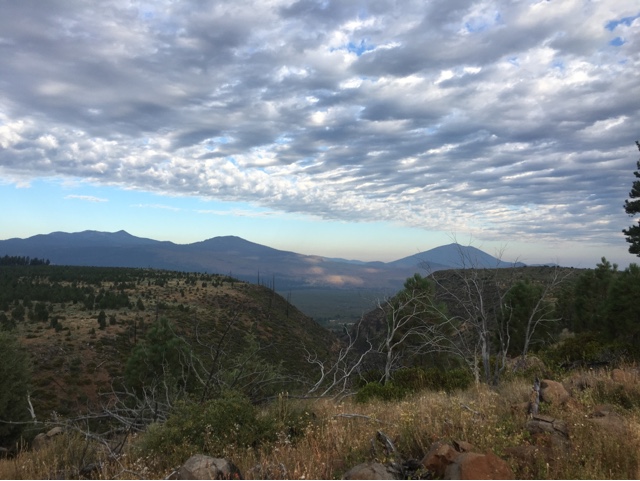 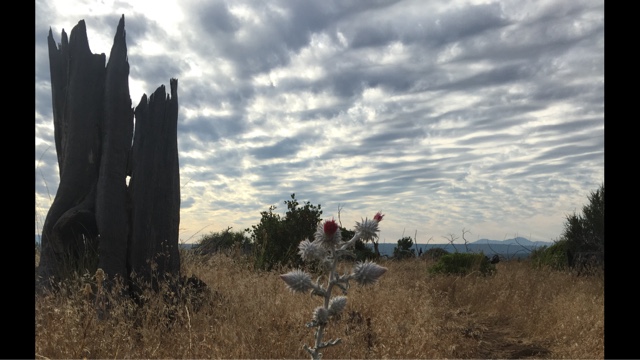 One of my favorite desert flowers

Edge of the rim
The only way I know how to describe Hat Creek Rim is that it was like walking on the rim of the Grand Canyon. The edge of the rim was a sheer drop off down into the valley. I spent the first half of the day walking close to the edge. There was evidence of a volcanic eruption everywhere. It was in the rocks, the fine sand, the desolation, and the lava fields. I was amazed by the shear scope of it all. The chilly morning air quickly turned into a hot oven. After leaving camp it was a 21.6 mile dry stretch. Actually, there was water, but it was only available from cow ponds. I choose to skip those and carry enough water for 22 miles. One of the cow ponds that I passed was made famous by the book/movie Wild. It was the cow pond where the two creepy guys approached Cheryl Strayed. Eight miles into my hike I crossed forest road 22. There used to be a maintained water cache at this road, but we were told not to count on it. I was pleasantly surprised to see that someone is once again maintaining it. Because it is at FR 22, they call it cache 22. I thought that was pretty whitty. I didn't really need any water, but it was a good place to take a break. 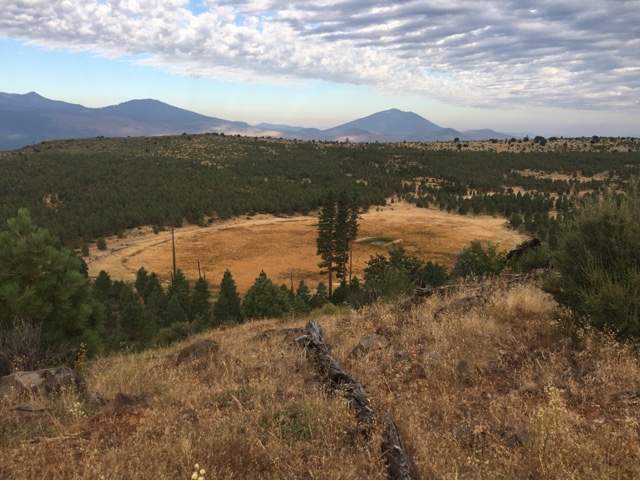 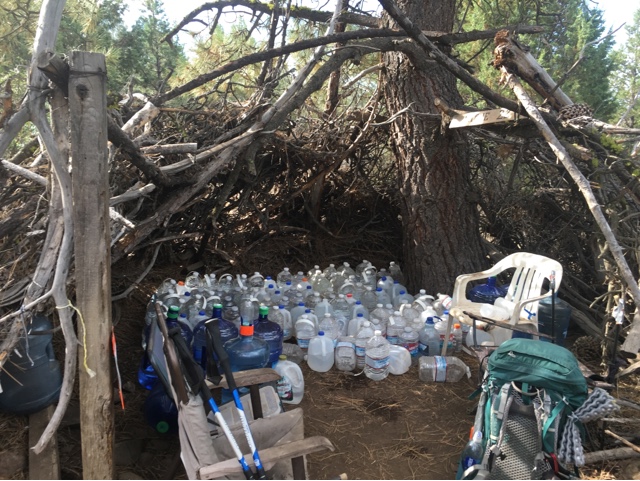 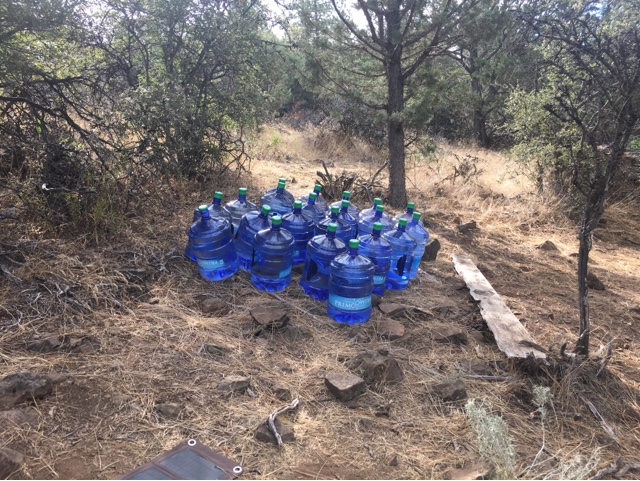 Tons of water
Just before descending from Hat Creek Rim I could see a large field of lava that stretched throughout the entire valley. I had never seen anything like it before. 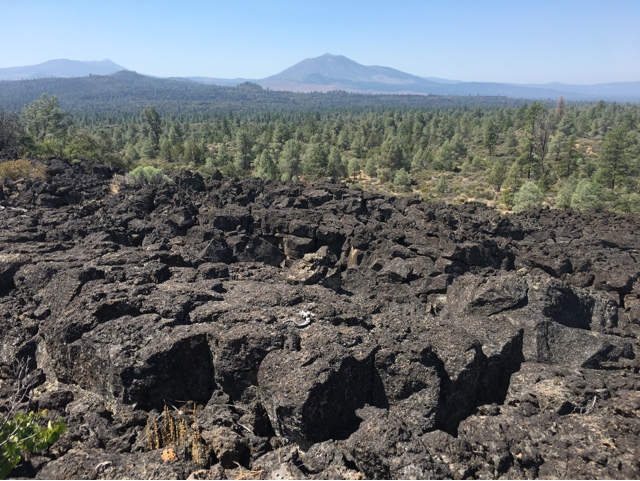 Lava field
Walking on lava rocks really took its toll on my poor feet. Unfortunately, for my feet, I was walking on lava rocks most of the day. Around midday Lost and Found caught up to me. We hiked together for a few miles. He is a really fast hiker and I appreciated him slowing down to my pace and keeping me company. Eventually he picked up the pace and we made plans to meet for lunch at the 1,400 mile mark. I only had two miles to go before reaching it so I kept up a brisk pace. I didn't want him to have to wait too long for me. He was planning on going into town and I understand that on town days you just want to hurry up and get there. 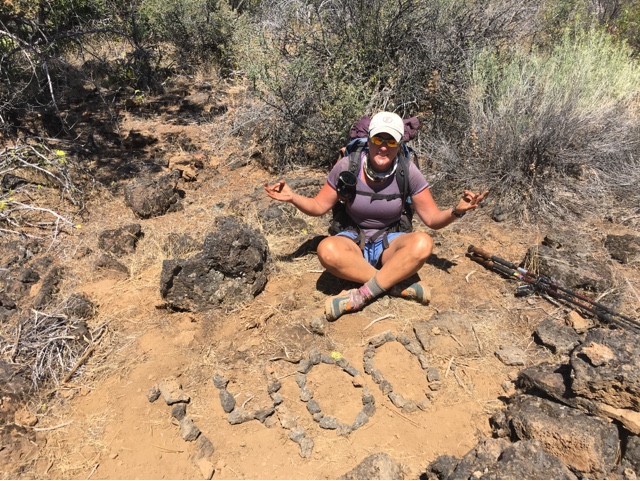 1,400 miles down
It occurred to me today that I'm now closer to Canada than I am to Mexico. That is a comforting thought and I'm not sure why it didn't occur to me when I hit the halfway point. Sometimes I can be so dense. After lunch I said goodbye to Lost and Found. I'm not going into town. I sent a resupply box to a camp store just off of the trail at Burney Falls State Park.
After hiking a few more miles I came to a natural water source in the form of an ice cold creek. I took another long break. The fine sand in this area is really doing a number on my feet. I haven't had a single problem with blisters this entire trip and I don't want to start now. I could feel a few hot spots so as I drank some ice cold water as I taped up my feet. It was at this point that I decided to push for a really high mileage day. Burney Falls had a campground just for PCT hikers. It has picnic tables, water, and trash cans. Sounds like heaven to me. The only problem was that it was still eleven miles away and I was beat. I did something that I never do, I took a few ibuprofen. I always take one ibuprofen 800 before bed and one in the morning when I wake up. It helps keep the inflammation in my knees manageable. Once the ibuprofen kicked in I felt fantastic. I crushed the first five miles and felt great. 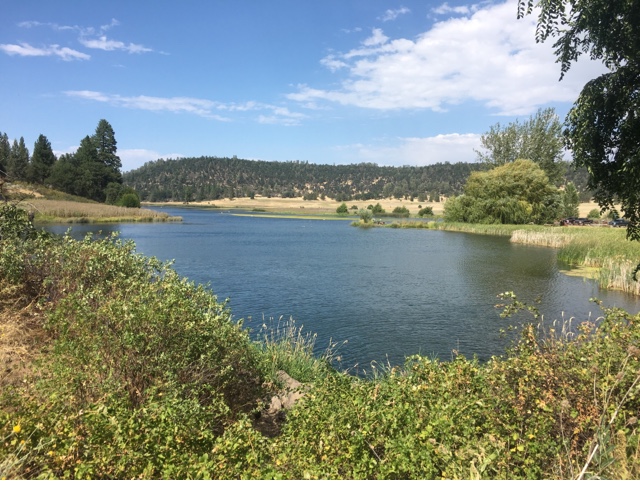 Crystal Lake
With only six miles to go I ran out of steam. I was walking in a daze. I probably resembled a zombie. I looked up at a dirt road crossing and I couldn't believe my eyes. There was trail magic!!! I feel like I hardly ever see or get trail magic. I always seem to just miss it. There was a picnic table with umbrellas, big jugs of ice cold tea and water, a cooler full of soda, some snacks, and a big trash can. I thought maybe I had died and gone to heaven. 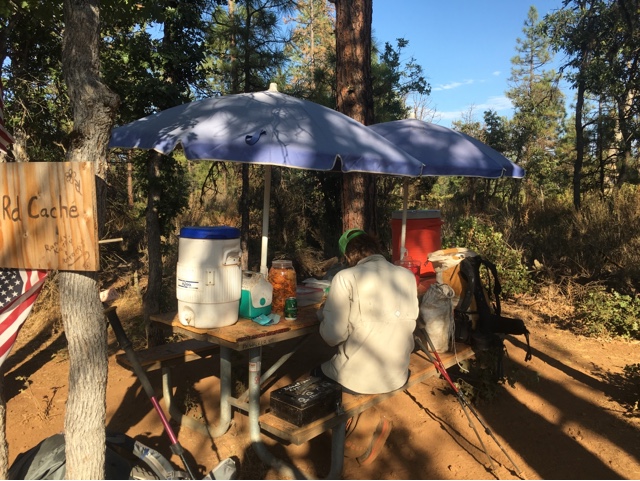 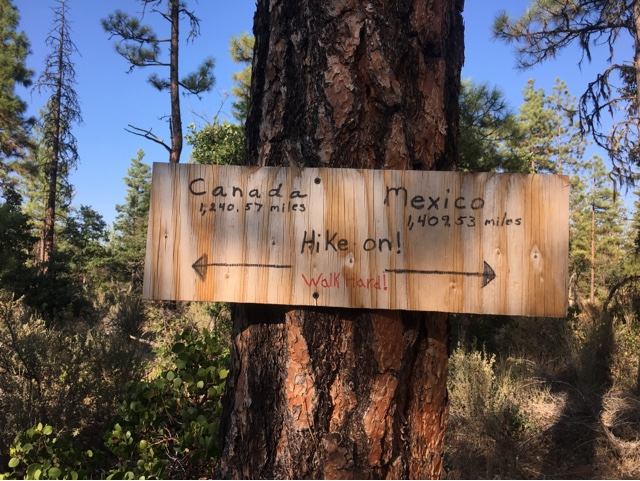 This is the sign that helped me to realize that I'm closer to Canada than I am to Mexico.
I guzzled down a Mountain Dew and packed out a little iced tea to have with dinner. Thanks Randy, Kathy, and Bandit for your generosity. I wouldn't have made it to Burney Falls without your generosity. A note on the trail register asked hikers to sign their name and to leave a joke. I was rather pleased by my joke. What do you call a group of Stormtroopers playing Monopoly? A Game of Clones.
I finished out my hiking day just before eight o'clock. The camp was great. I was able to sit at a picnic table and cook my dinner. Anytime I don't have to sit on the ground is a great day for me.
"Our own worst enemy cannot harm us as much as our unwise thoughts. No one can help us as much as our own compassionate thoughts.”
-Buddha
Posted by Yoda at 9:27 AM