Day 90- Going Down To The Twilight Zone 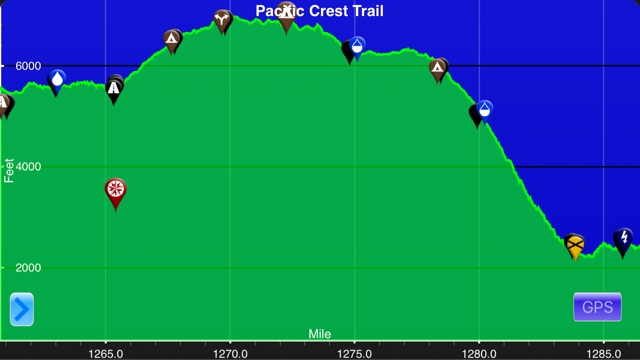 Total up/down: +3281/-6569 feet
My only goal today was to make it into town as early as possible. I have been cranking out some very difficult miles since leaving Sierra City and I was looking forward to eating real food, a cold shower, and doing laundry. I was also excited because I would finally catch up with U-Turn, Evac, and Outro. I set small goals for myself throughout the day. My first goal was to hike thirteen miles in four and a half hours. That would take me to a water source and I could take a thirty minute break there. It has been difficult to change my hiking style lately. I prefer to take a break every two hours, but to hike big mile days I can't afford that luxury. The hike to the water source looked pretty easy on paper, but the reality was much different. My elevation profile made it look like it was mostly flat with small uphill climbs. The reality was a steady uphill climb mixed in with short descents. For the early morning portion of the hike I walked through a mix of forest with a few portions of overgrown brush thrown into the mix. 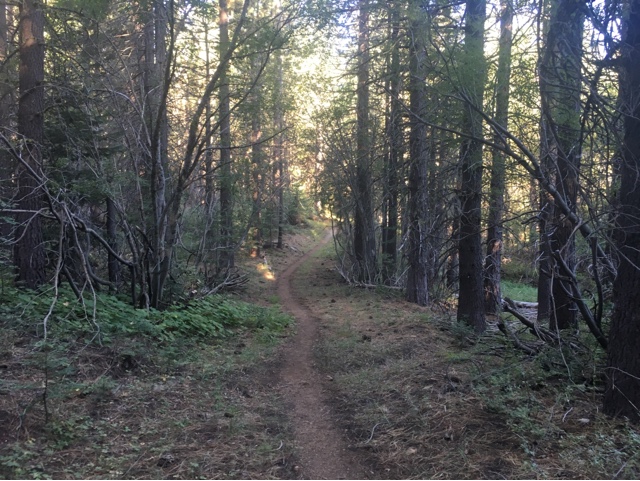 Nice forest hike
I have had a few people comment on my blog lately. They helped to identify the snow plant. Michael Butler went into great detail about it. He even mentioned that it is in the same family as a manzanita tree. After reading his post I have seen the similarities. I only recently started seeing manzanitas again. 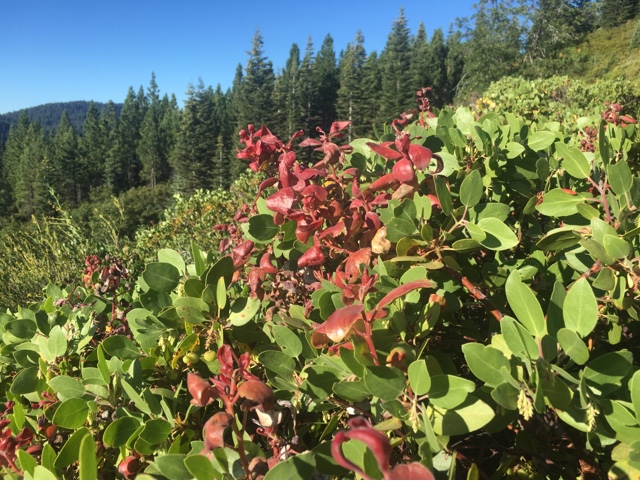 Blooming manzanita
The descent down to the water source was nice and shady. I was able able to cool down and enjoy a break while drinking ice cold water. The rest of the hike was brutally hot and hard on my knees. I lost all of the elevation that I fought to gain yesterday. The trail into Belden went through a very exposed area with a lot of overgrown brush. I do not like hiking through sections like this. The brush is constantly cutting up my legs and I can't see where I'm stepping. I always feel like I'm going to trip over a rock or step on a rattlesnake. I made it through without any of those things happening. Eventually the trail descended back into the forest and I had seven miles of switchbacks to hike. About halfway down my knees were on fire. I had to take more breaks than I had planned on because of this.

Great views on the way down 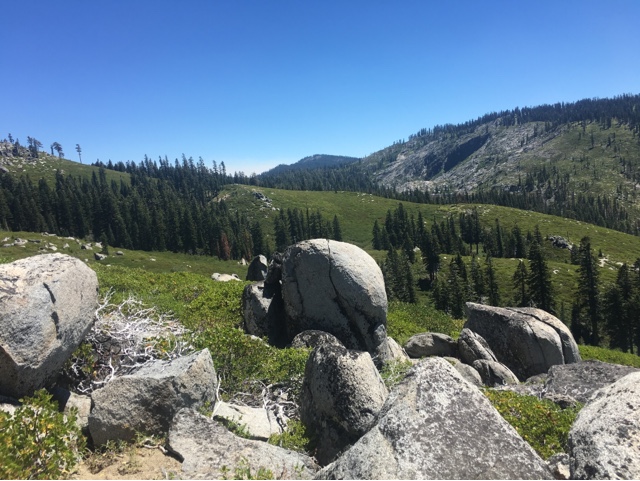 Almost perfectly round boulder
This area of the hike is notorious for the poison oak mixed in with the brush. I took my time and paid attention to where I was stepping. I saw lots of poison oak, but I think I managed to avoid it all. I was listening to a podcast to help distract me from the discomfort in my knees. All of a sudden I heard a loud crashing sound. I pulled my ear buds out so I could hear better. I turned around to where I heard the commotion and I saw a huge black bear running away from me. That is the ninth bear I have seen on this trip and the first time that it had acted appropriately and run away at the sight of me. I wasn't quick enough to get a picture or a video though. Since I had taken out my ear buds I could hear what was going on around me. I could hear really loud music with a thunderous bass playing. I was still a few miles from town and it made me wonder what was going on. I would find out soon.
As I was walking into town(I say town, but Belden Resort is just a small camp store with a restaurant and bar located on a river) I kept seeing strangely dressed people. Some of them were half naked. Others were naked and just had body paint on to cover themselves. The music just kept getting louder and louder. As I approached the resort area hundreds of people had tents set up. I had just walked into a huge electronic dance music(EDM) festival. I had several people offer me acid and other drugs on my way into the store. It was like walking into the twilight zone. I had no other option, but to stay the night there. Belden isn't a proper town. There was no other type of lodging available. The trail angels that live close by, The Braatens, were already booked for the evening. I had just hiked 23 miles before three o'clock and I was too beat to hike on. I said hello to a bunch of my friends and I found the rest of the Wolf Pack in the restaurant. It was great to see them again. I didn't expect to catch up to them so quickly.
I grabbed a Gatorade and joined Outro, Evac, and U-Turn for lunch. The resort had a taco bar and I love tacos. We watched all of the drugged out people and shook our heads. There were people who had brought their children with them. It was bizarre and disgusting at the same time. Canary and Droplet had been there since yesterday. They were getting ready to hike out though. They informed us that the music goes until seven in the morning. I don't expect to get much sleep tonight. We waited until they had packed up their stuff and we took their camp spot. There was nowhere else to camp. We fit about fifteen hikers in an area meant for five people. Canary and Droplet described the camp area as a cuddle puddle. We are literally right on top of on another.
Even though the Braatens couldn't host us tonight they met us at the resort to bring us our mail drops. Once again I have way too much food. I'll be carrying enough food for five days when I only needed enough for two and a half days. I guess I'll be eating well. It will be a nice change to not have to ration my food. I can eat as much as I want. 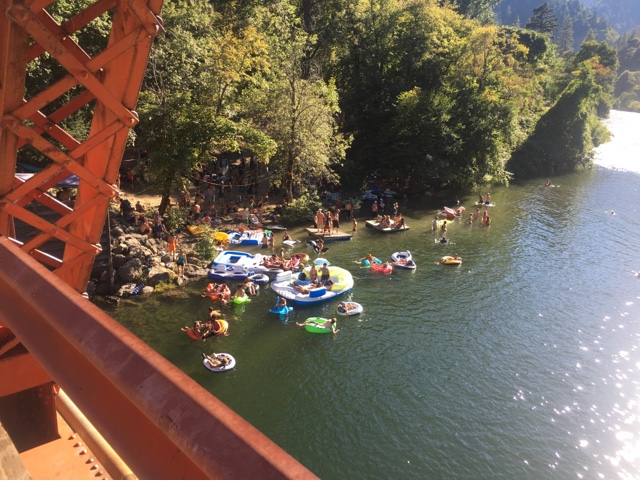 Main stage at the rave
I spent the rest of the evening on the porch of the camp store people watching. It was some of the best free entertainment that I've had this whole trip. I stayed up way too late because of this. I think it was around midnight before most of us went back to camp to try and get some sleep. Even with earplugs in I could still hear the music. I finally drifted off around two thirty. I woke up around four o'clock when some random hiker decided to set up right next to me. Usually this isn't too big of a deal, but it was pretty poor etiquette since I was cowboy camping. At one point his legs were on top of mine. To say that I didn't get much sleep would be a huge understatement. When I finally woke up in the morning the music had stopped and most of the hikers were beginning to pack up. I discovered that the random hiker was somebody that I knew, so it was a little less creepy.
"Mindfulness is simply being aware of what is happening right now without wishing it were different; enjoying the pleasant without holding on when it changes (which it will); being with the unpleasant without fearing it will always be this way (which it won’t).”
– James Baraz
Posted by Yoda at 7:52 AM