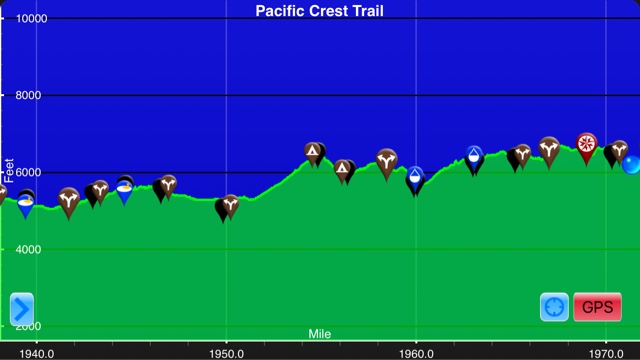 Total up/down:+4,272/-3,093 feet
Today was a pretty cool day. It was also my first back to back thirty plus mile day. It really kicked my butt. I struggled to make miles all day. Usually I knock out 9-10 miles in the morning before I take my first break. I only made it four miles this morning before I stopped for second breakfast. After stopping so early I knew it was going to be a long day. 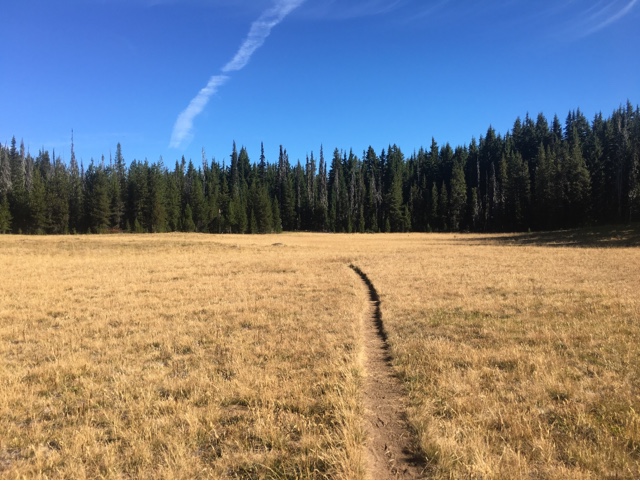 Cool little meadow area
Today is one of the only times this entire trail that I wish I was carrying paper maps. It wasn't for directional purposes that I needed maps for. I couldn't identify the mountains that I was hiking around. There was a really neat mountain next to South Sister, for awhile I thought it was South Sister, that I wanted to know the name of. 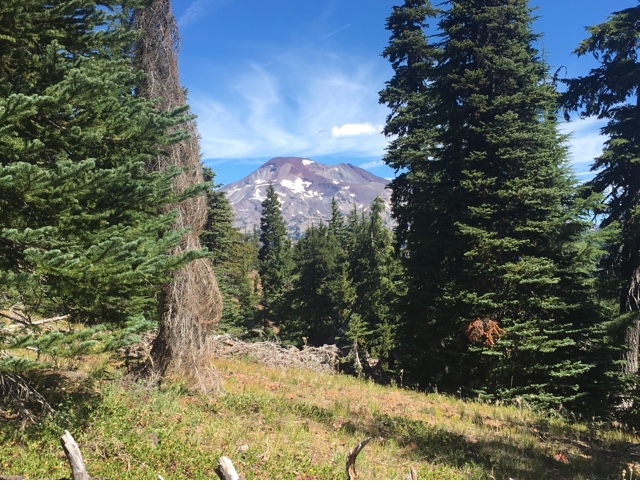 Unidentified mountain
I really thought this was the South Sister until I came around a corner. There was no mistaking which one was the Sister. 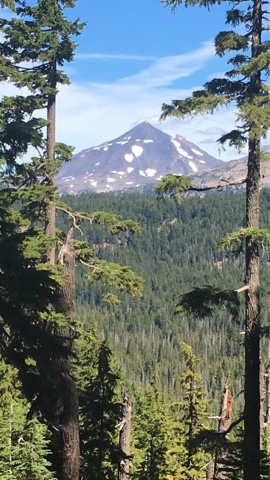 South Sister
I was really hoping I could get the perfect angle, where all three Sisters would be visible, but that didn't happen today. Hopefully tomorrow they will line up for me.
I took my lunch break next to Sisters Mirror Lake. It was a popular lunch spot for thruhikers and day hikers. I struck up a conversation with two really nice ladies from Bend. They tried to help me identify some of the features I've been seeing. A few of the mountains I saw are actually called craters or buttes. They also pointed out some huckleberry bushes. I've been seeing them the last few days, but have avoided eating any of the berries. I refuse to eat wild edibles until someone has identified them for me. 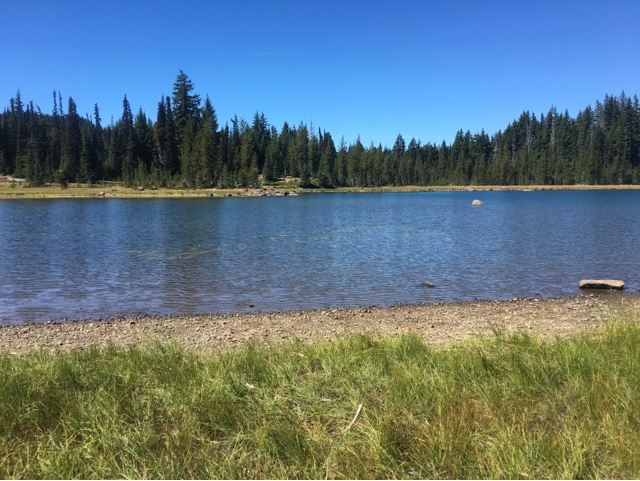 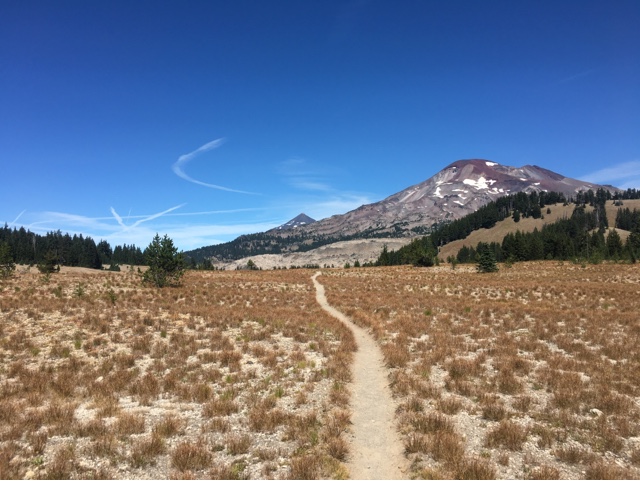 La Conte Crater and South Sister(I think?)
I was really thinking about setting up camp early. I was super exhausted and the idea of setting up camp before dark sounded really appealing. Unfortunately I did not notice until too late that the next few water sources were located in a limited entry area. I was only permitted to walk through this area. There was absolutely no camping allowed. In the grand scheme of things it wasn't too bad. The Obsidian Limited Entry Area was only a few miles long and it was really cool. There were nice streams, beautiful scenery, a waterfall, a tons of obsidian. 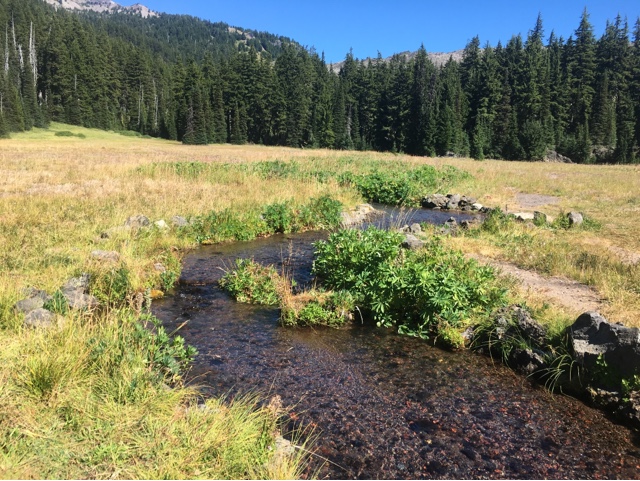 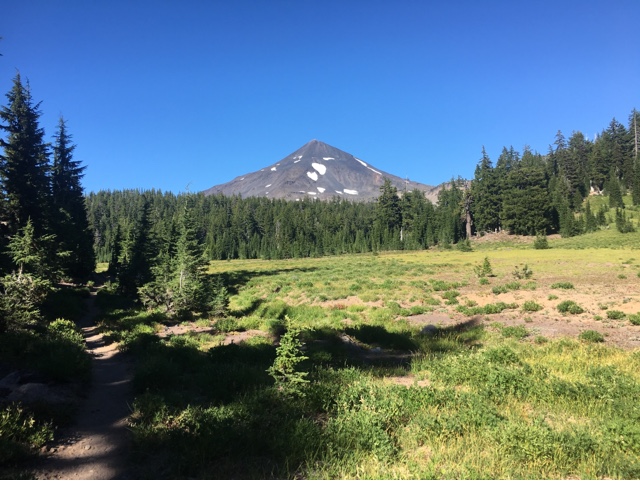 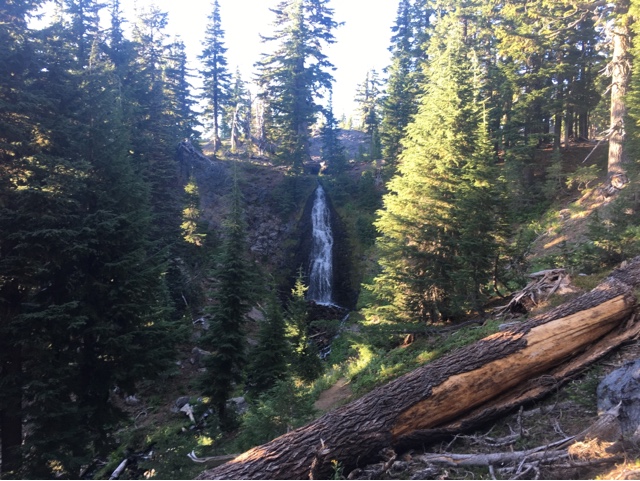 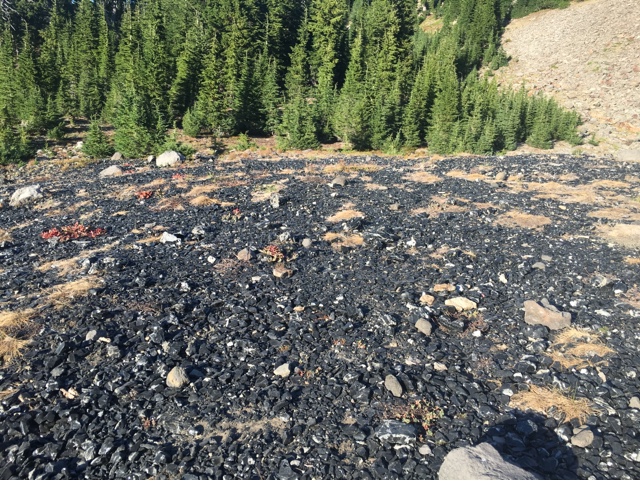 Tons of obsidian
I found a place to camp as soon as the limited entry area ended. It wasn't an ideal location, I had to carry water for two miles, due to the insane amount of mosquitos and yellow jackets. As I ate dinner and the sun fully set, the bees went to bed and the skeeters died down. I decided to cowboy camp, mainly out of shear laziness.
Tomorrow promises to be an epic day. I should be able to see North, Middle, and South Sister, Mt. Washington, Mt. Jefferson, and three fingered Jack!
How hard to realize that every camp of men or beast has this glorious starry firmament for a roof! In such places standing alone on the mountain-top it is easy to realize that whatever special nests we make - leaves and moss like the marmots and birds, or tents or piled stone - we all dwell in a house of one room - the world with the firmament for its roof - and are sailing the celestial spaces without leaving any track.
- John of the Mountains: The Unpublished Journals of John Muir, (1938), page 321.
Posted by Yoda at 8:17 AM