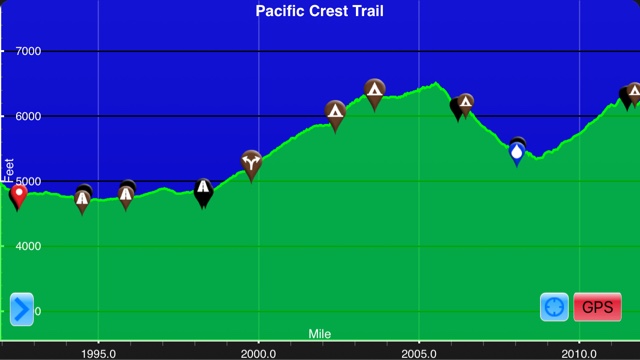 Total up/down: +3,240/-1,743 feet
I have gone so long without having to deal with rain that I think I have forgotten how. I woke up to feel rain splashing on my face. I quickly began to pack up my sleeping bag. That is the one thing that I own that I can't afford to get wet. I was halfway done putting it into it's stuff sack when it stopped raining. It was just a light sprinkle that ended as fast as it began. Since I was wide awake I decided to continue packing. The youth camp offers breakfast at 8:15 and there was no way I could skip a free breakfast. I had fallen asleep last night before finishing my laundry. I walked up to the hiker area, dropped my pack off inside, and then set out to put my minuscule amount of clothes into the dryer.
Once it was time for breakfast I queued up with everyone else. Thankfully the line moved quickly. This mornings fare included Belgian waffles, regular waffles, whip cream, applesauce, peanut butter, a raspberry topping, cereal, oatmeal, english muffins, and vegetarian sausages. I had two Belgian waffles. One with raspberry and whip cream and the other with peanut butter and apple sauce. I also had a bowl of cereal and two of the tofu sausage thingys. Everything was good except the tofu sausage thingys. They were disgusting. I ate so much that I felt sick. I was hoping to be back in the trail by nine o'clock, but  I had to wait for my breakfast to digest and my phone to charge. I didn't start hiking until eleven-thirty. The sky looked very ominous. I expected it to start raining any minute. The miles came slowly and my stomach stayed upset all afternoon. 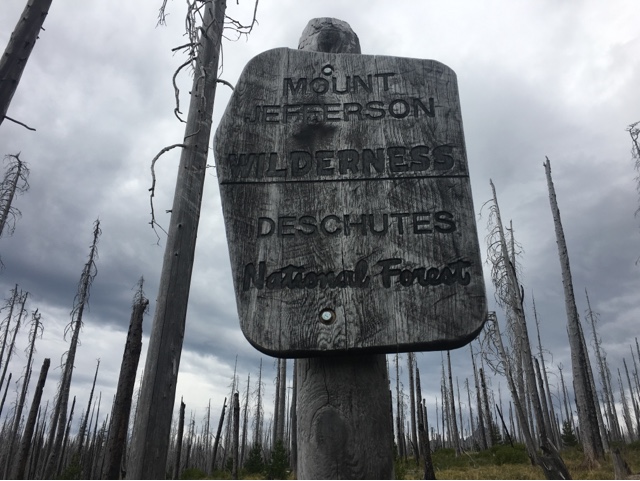 Dreary day to match the dreary terrain
Most of the hike today was through more burned out forest. I stumbled through the soft sand all day. I just didn't have any energy or motivation this afternoon. I'm pretty sure I took a break every hour on the hour. Finally, after four hours of hiking, and eight miles I hit the 2,000 mile mark. 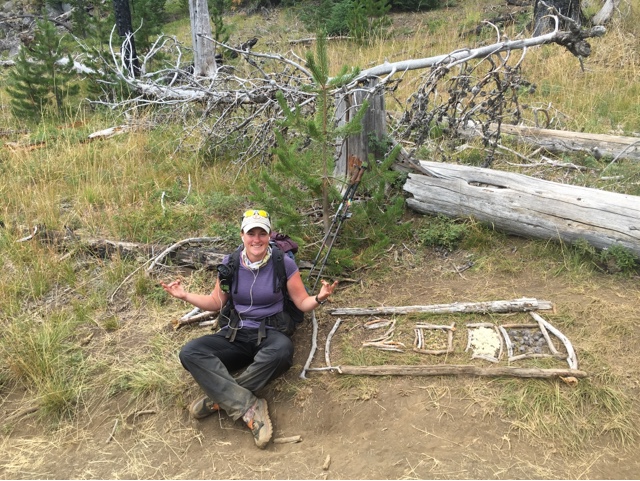 2,000 Miler
Everyone that completes a thruhike on the Appalachian Trail is referred to as a 2,000 miler. You even get a fancy patch and certificate.

Notice the patch
Looks like I'm a 2,000 miler again. At this point on the AT, I only had 189.2 miles left until the end. This time around I still have 650.1 miles left. I'll be done in no time.
I was really hoping to hike at least 25 miles today, but with my upset tummy and utter lack of motivation I knew that I would have to settle on a much lower number. I exited the Mt. Washington National Forest and entered into the Mt. Jefferson National Forest. I was disappointed that I never got a good view of Mt. Washington. It wasn't until later when I looked back at my pictures that I realized I had several shots of Washington. I just hadn't realized what Mounatin I was photographing. 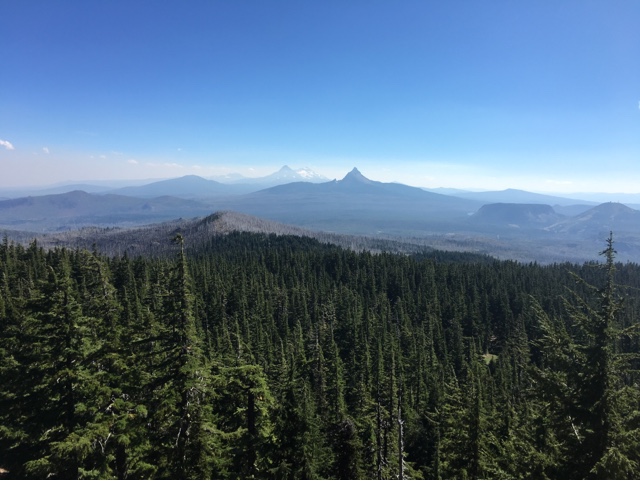 3 Sisters(barely visible through the haze) and Mt. Washington(very pointy peak)
I also realized that I finally got my picture of all three sisters 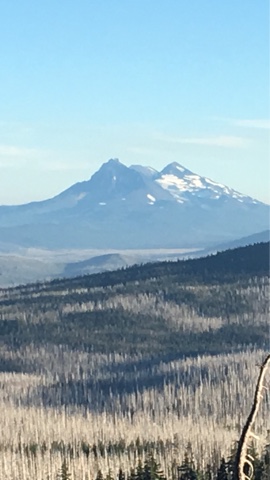 All three Sisters
I hiked right next to 3 Finger Jack. From my vantage point I could see rock climbers working their way up to the summit. 3 Finger Jack is a very cool sight to behold and looks like it would be a lot of fun to climb. 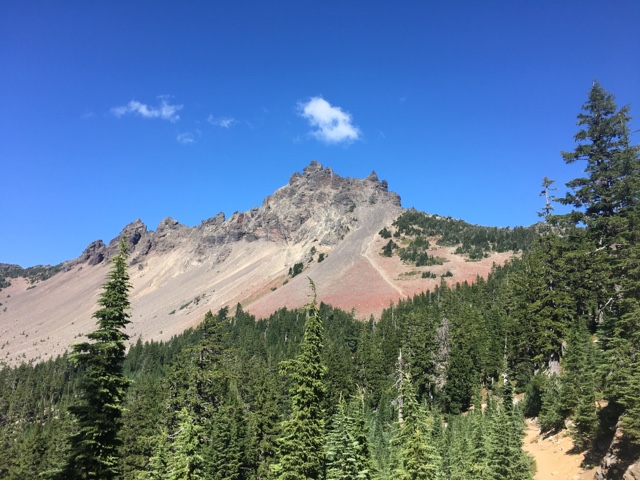 Back side of 3 Finger Jack
I was ecstatic that the sun was finally out again. I have been extremely lucky weather wise. It has only rained(or sleet, hail, or snowed) three times in 120 days. My first experience with the wet stuff was from a nice warm and toasty room in Mt. Laguna, CA on day 3. The second time I was able to sit it out under a rock outcropping on the way down from Mt. San Jacinto(early days of the Wolf Pack). The only other time it rained I was able to wait it out in a privy at the base of Kearsarge Pass. After the wet AT last year I can't believe I've gone 120 days with actually hiking in the rain. 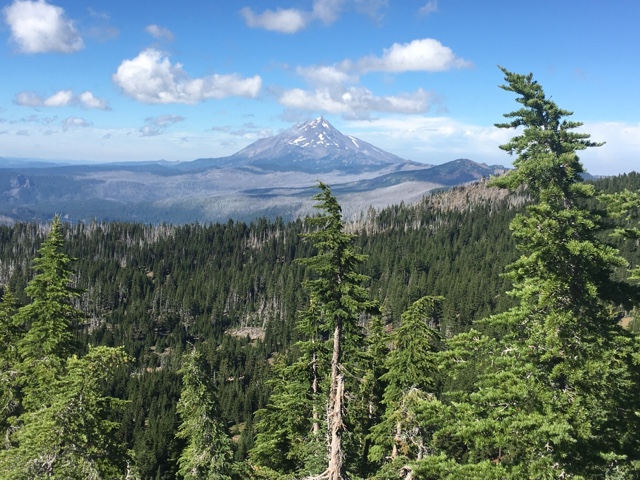 Mount Jefferson framed against blue sky's
Unfortunately, rain is in the forecast for the next four days. I think it is more than likely that my streak is about to end. With the rainy forecast also comes colder temperatures. My last three miles of the day were rather unpleasant. The temperature dropped significantly and the wind really began to blow. I think the mercury must have dropped by thirty degrees over the course of twenty minutes. By the time I made it into camp I was frozen and my fingers had lost all dexterity. I fumbled around trying to set up my tent in the wind. I'm a little out of practice setting up my tent, especially in windy conditions. Most nights I just cowboy. I was so cold after setting up camp and cooking dinner that I decided to have dinner in bed. I climbed into the tent and my sleeping bag. I was super careful not to spill food inside. I made a double portion of chili flavored ramen and added a lot of hot sauce. This culinary delight warmed me right up. Here's hoping that I stay dry tonight.
"The miracle, or the power, that elevates the few is to be found in their industry, application, and perseverance under the prompting of a brave, determined spirit.”
~ Mark Twain
Posted by Yoda at 12:53 PM