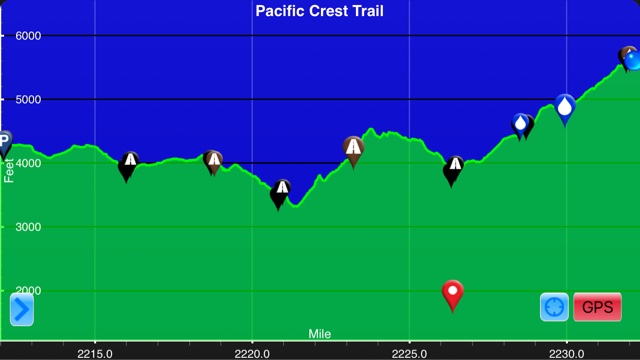 Total up/down: +3,932/-2,574 feet
I did not sleep very well last night. I tweaked my back by carrying all that water to dry camp last night. Every time I rolled over in my sleep my aching back woke me up. I wasn't up as early as I would have liked, but I was more efficient packing up. I have decided to readjust my expectations on my morning departure time. I have decided that it is unrealistic to want to be hiking by six thirty. The sun isn't even rising until 6:37. My new goal is to be hiking by seven o'clock. I think that is very achievable, for the next few weeks at least. With that being said, I wasn't on trail until 7:10 this morning. Obviously I have to do better. I made up time during the first hour of my hike. I was excited because today was a town day. I had put myself with fourteen miles of Trout Lake and I hoped to be there by noon. I managed to hike 3.5 miles in the first hour, but after that my back began to really bother me so I forced myself to slowed down.
I really wanted to get in and out of town as quickly as possible. The plan was to hitch in, pick up my resupply box, eat, charge my battery pack, and hitch back out. I was hoping to achieve all of this in under three hours. I decided to skip taking a shower and doing laundry. Those chores are even more time consuming and it has only been three and a half days without. The hitch into Trout Lake can be a little tricky I have heard. On week days the road doesn't have much traffic. I was lucky that it was a weekend. I also felt pretty good about my chances because it was the first day of hunting season for elk(bow and arrow only) and it is prime season for mushroom picking. Oh, and let's not forget that it is also the tail end of huckleberry picking season. Like I said earlier, I wasn't too worried about getting into town. 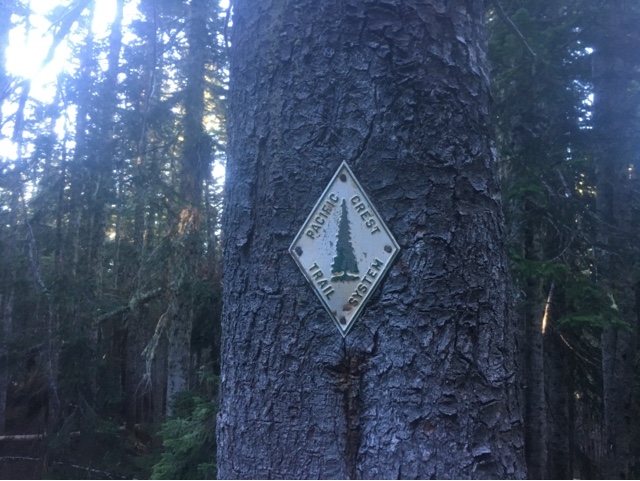 I just love seeing these old trail markers
I banged out the fourteen miles to get to the road crossing by noon. There was one extended climb just before reaching the road. I didn't think that it was too bad, but other hikers that got to the road before me were complaining about how hard it was. I had to chuckle at this. It was only a 1,500 feet spread over three miles. I don't think they would like theAppalachian Trail very much. When I got to the road crossing there was trail magic. A local Abbey had set out snacks and drinks. I scored a Starbucks Caramel Frappacino!!! I skipped the snacks because I was going into town. I thought maybe someone behind me would appreciate them more. I really lucked out on getting a ride into town. There was a local trail angel there waiting to give people rides. He was going to wait another thirty minutes to allow for more hikers to show up. I didn't mind waiting, it was easier than hitching. While I waited, Becky showed up. Her niece, Zippy, is thruhiking and she was returning her and Sleepy Andy to the trail. Becky offered to take me back into town with her. Without trying I had two different possible rides into town. It doesn't get much better than that. 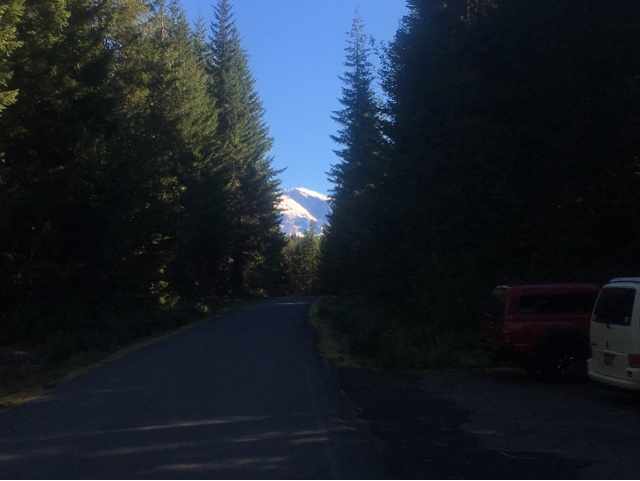 Partial view of Mt. Adams
Once in town I stuck to my plan. I picked up my resupply box and went to grab lunch. The tiny town of Trout Lake was really busy. Washingtonians are very active outdoorsy people. There were people on bikes, lots of canoes, kayaks, motorcyclists, and people going fishing. I went to the cafe to sort my food and to get lunch. I had a bacon burger, fries, and peanut butter banana milkshake. I would have gotten out of town within the hour, but my external battery pack takes awhile to charge. I finished this last section one day faster than I had planned on so I had a lot of extra food. I have away a few small things, but I decided to carry the extra food with me. With the colder night time temperatures I'm eating more calories. It is nice to have more than enough food to eat. Although it does stink carrying it. There was a list of trail angels who provide rides back to the trailhead. I called three people on the list before I secured a ride. I just love that these small towns have such great trail angels. Trout Lake was thirteen miles away from the trail and the trail angels providing rides is a big help. For the first time in a long time I managed to stick to my plan. I was in and out of town within three hours.
I quickly realized that I would not be able to get in very many miles after town. My pack was really heavy again and I had to gain about three thousand feet of elevation. For the fourth night in a row I was also going to have to dry camp. Ugh, I am so over dry camping. The last few miles of the day are hard enough without carrying the extra weight of water. The climb was actually mildly enjoyable. I just started the Mt. Adams Wilderness and I had brief glances of the mounatin for most of the afternoon. 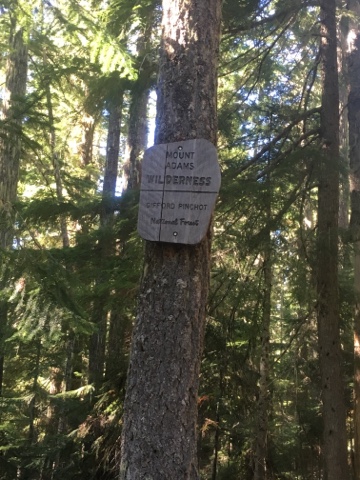 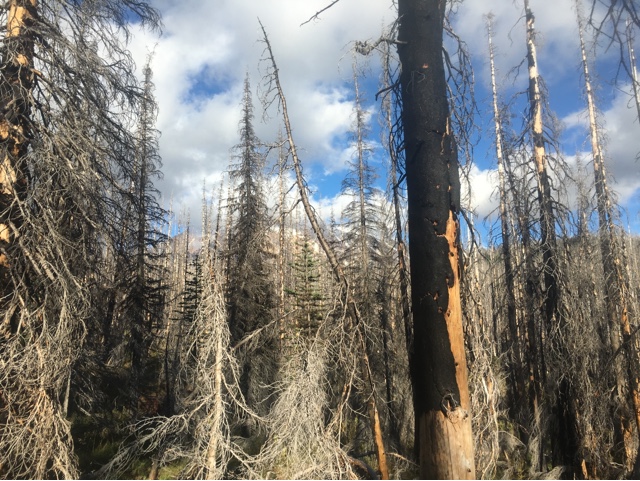 Tiny view through the burned trees
I had a mildly scary moment when I couldn't find my last water source of the day. It was located in the middle of a steep section of trail(PCT steep) and at first I thought the spring was dry. I dropped my pack and began searching for any signs of water. It was frustrating because I wasn't sure if I was hearing the trickle of water or the wind through the trees. If I couldn't find this water source it was going to be another six and a half miles to the next one. I wouldn't die of thirst, but I would have had to hike into the night. Eventually I ended up finding the water. It was about a tenth of a mile farther down the trail from where it was supposed to be. Now I just had to carry it two more miles and I would be at my campsite. No problem, right? Wrong. It was at this point that the PCT decided to take a page out of the AT's playbook. I climbed 800 feet over the next mile. It definitely wasn't the worst climb I've ever done, but with a cranky back and heavy pack it wasn't the most fun I've ever had. I probably could have gone another few miles tonight, but I found a nice flat spot for my tent and called it a day. 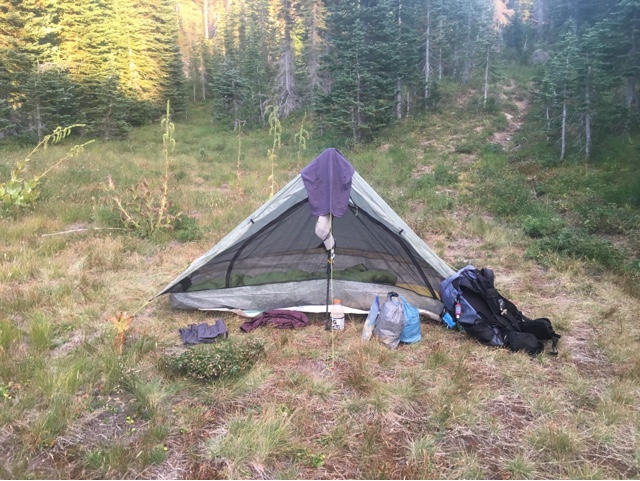 Golden sunset
"In order to carry a positive action we must develop here a positive vision.”
— Dalai Lama
Posted by Yoda at 2:43 PM