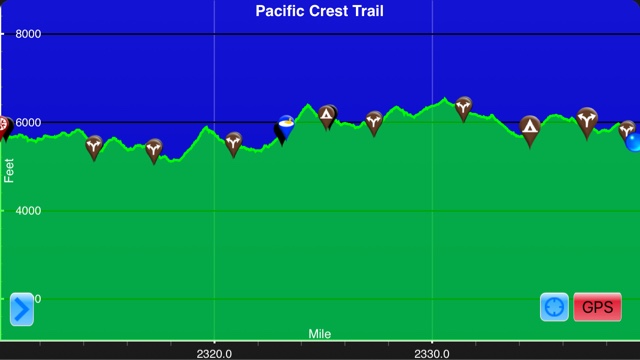 Total up/down: +4,554/-4,599 feet
I can't believe that it has been one year since I finished the Appalachian Trail! I spent the entire day thinking about it. I'm usually pretty good about remaining in the moment, but today I relished the opportunity to linger in the past. Hiking the AT changed my life. I listen to a podcast called, Sounds of the Trail and they describe thruhiking as, "Ruining your life in the best way imaginable". I totally think that is a true statement. I can't imagine ever going back to the way my life was before. I hope I can spend the rest of my life working to live instead of living to work. 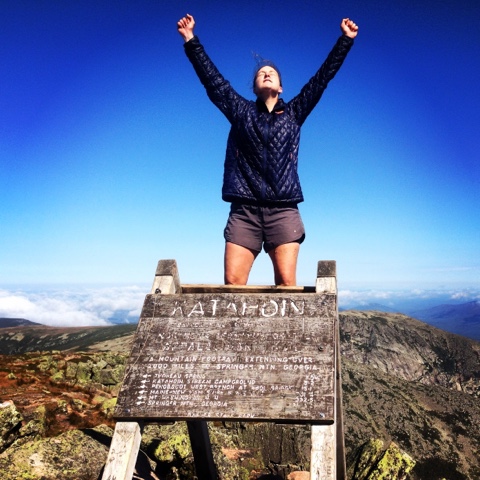 One year ago
As I approach the end of this journey I can't help but wonder what is next?
I actually hit my goal of being on the trail by seven o'clock. Actually I was hiking by 6:55. I was hoping to hike 32.5 miles today, but I fell way short of that goal. I never seriously thought I would make it that far anyway. I was thrilled to make it twenty-seven miles. Today consisted of hiking in and out of Mount Rainier National Park. I had a clear view of the mountain for most of the day. I think I've said it before, but I'll say it again: Mount Rainier is so much more impressive than Mount Whitney. The fact that it stands alone probably has something to do with that. Mt. Rainier is the highest point in Washington and the second highest in the lower 48. It stands at 14,411 feet tall. It has the most glaciers of any site in the lower 48, which I find surprising. I thought that distinction would go to Glacier National Park. Mount Rainier is a volcano, which arose only 50,000 years ago. It last erupted between 1820 and 1894 and is expected to erupt again. Annually about 5,000 people successfully reach its peak. The name was given in 1792 by, George Vancouver, after Peter Rainier of the English Navy. In recent years there has been a movement to rename it Tacoma or Tahoma as many believe this to be the original Native American name. The mountain sits in the middle of Mount Rainier National Park, which was established by congress in 1899. Boom, I just dropped some knowledge on you, and knowledge is power. :-) 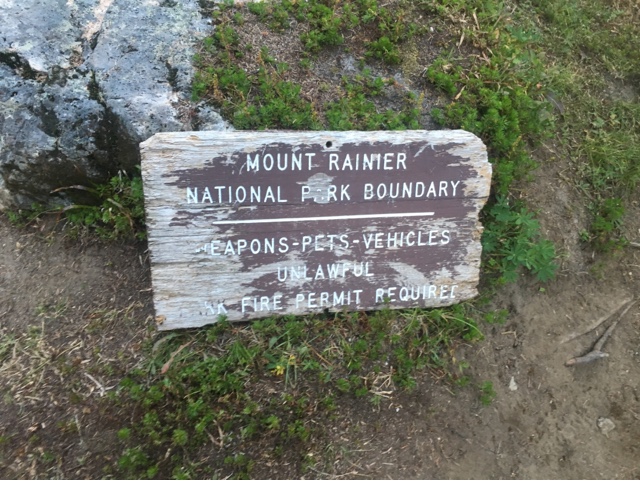 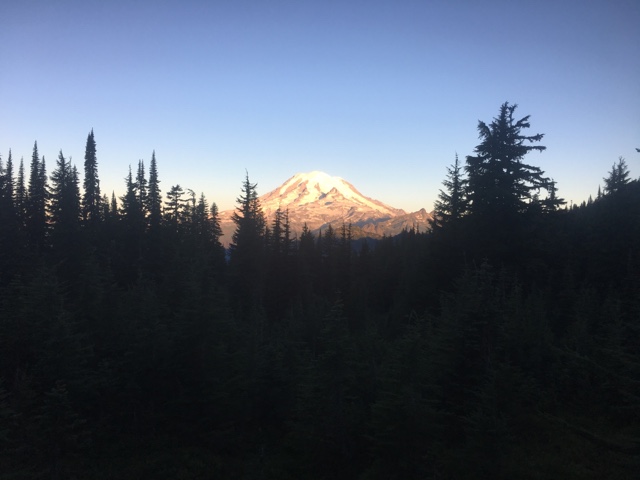 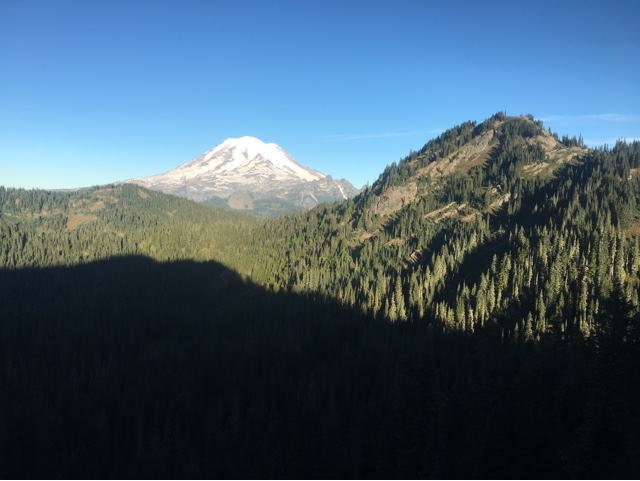 I spent the day creeping closer and closer
Even though I had a big mile day I didn't feel like I was pushing hard. I took a lot of breaks and really enjoyed myself. Not only did I have great views of the mountain, but I hit several pretty lakes and I saw a whole lot of elk(they are too fast to get s good picture though). 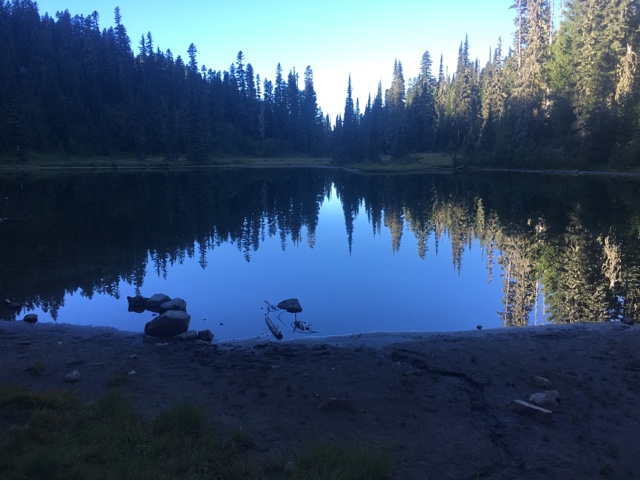 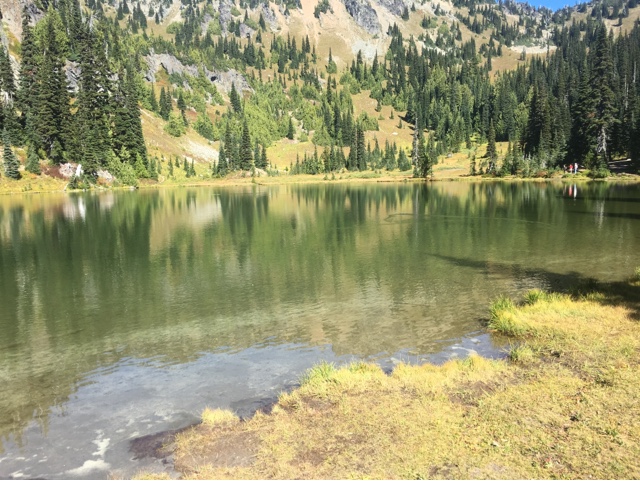 Sheep Lake
I have hiked past several Sheep lakes in the last few days. I think this was the third Sheep Lake in three days. It was only 55 degrees out and there were people swimming and sunbathing. Washingtonians are a hearty breed. I had a nice long break next to the shore of the lake. It was very relaxing and calming. I spent about thirty minutes looking at pictures from my 2015 AT thruhike. It was a great break. View back down to Sheep Lake, Mt. Adams and the Knifes Edge are visible in the distance
I spent the next several miles walking up high along a ridgeline. It was a beautiful day. The temperature was just right for backpacking. It wasn't too cool or windy out. I took several breaks right next to the trail. 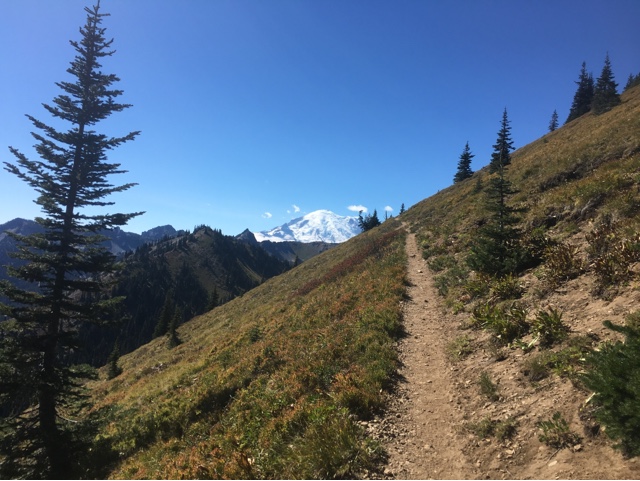 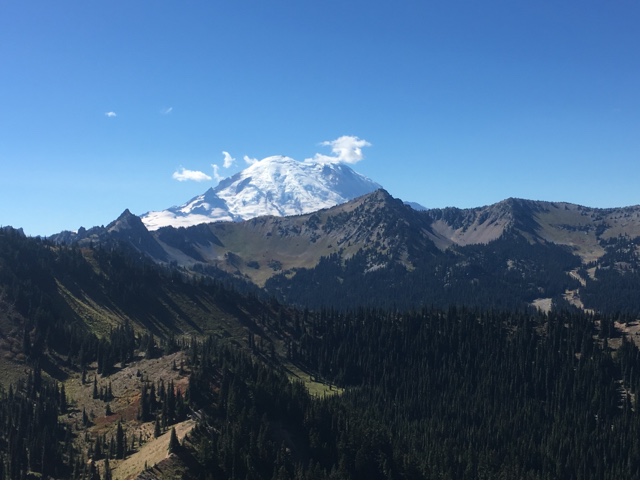 Great view of the glaciers
Shortly after taking this picture I came upon what I thought was just a weekend hiker. We chatted briefly, but from a short distance. I went to filter water and we said goodbye. I thought she seemed vaguely familiar, but I didn't think much of it. After I finished processing my water I quickly caught back up to her. This time we were face to face and I realized that it was, Donna "L-Rod" Saufley, the amazing trail angel from Hiker Heaven in Agua Dulce, CA. She is out on the trail this year to finish up her thruhike. This is the third time that our paths have crossed this season. I hope we get to hike around each other for awhile. I was getting pretty tired and was thinking about setting up camp soon when I realized that I didn't have enough water. Crap, I was going to have to go four miles farther than I wanted to so I could have water in camp. I hurried along as fast as I could. In the end I made it to a spot with camping and a water source, but it was nearly dark. I managed to get setup and process my water before it got really dark out. I still had to cook and eat in the dark though.
"The reason people find it so hard to be happy is that they always see the past better than it was, the present worse than it is, and the future less resolved than it will be.”
- Marcel Pagnol
Posted by Yoda at 12:39 PM