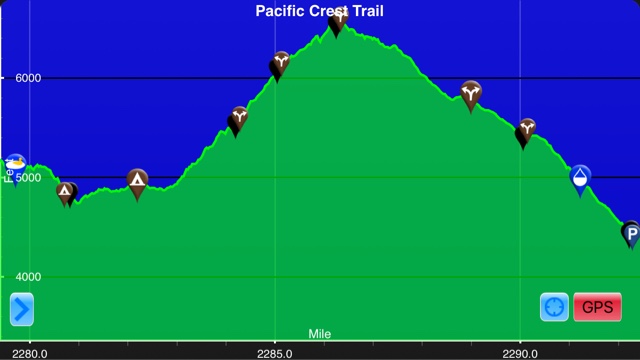 Total up/down: +2,191/-2,864
I always look forward to resupply days. I'm usually running low on food, but today I still had over a days worth of food left over. Nontheless, I was excited. This resupply box contained a new pair of shoes, which I really don't need yet, and a fleece jacket, which I desperately need. It was really cold last night. I packed up everything I possibly could from inside my sleeping bag. Eventually I forced myself out of the warm embrace of my sleeping bag and finished packing up. I didn't dilly dally around camp for long. I brushed my teeth and began hiking. I walked as fast as I could, hoping I would begin to warm up. I can't wait to get my new gloves, but I'm still five days away from where they are being delivered. I only had 12.6 miles to hike before reaching my resupply location, Whites Pass. The hike to Whites Pass involved one long extended uphill climb and I was looking forward to it. I knew that would warm me up. Shortly after leaving camp I got a good view of where I came from yesterday. I could see back to the Knifes Edge. It looked really impressive in the distance. 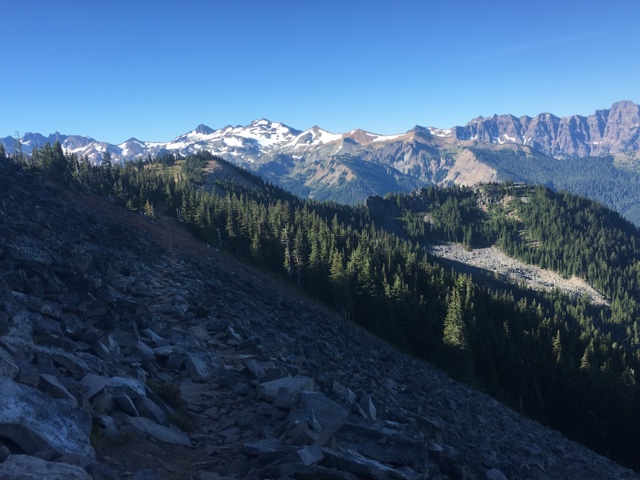 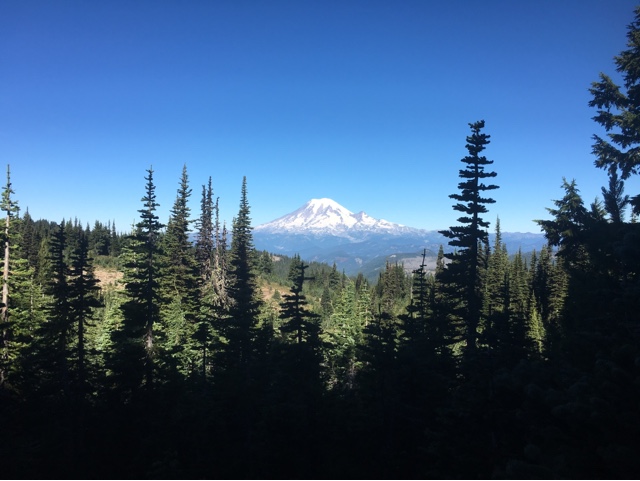 Rainier
My resupply pace in Whites Pass is called, The Kracker Barrel. I was really  disappointed to find out that this Kracker Barrel is just a convenience store, not the chain restaurant. I love Kracker Barrel restaurants. I have two friends from the AT, Burl and Tree Beard, who live relatively close to Whites Pass. When they found out that I was hiking the PCT they expressed an interest in meeting up with me when I made it here. Cell phone reception has been spotty, but I have been trying to coordinate with them to make this happen. Unfortunately, it seemed like this would not happen. Like most normal people not hiking a long distance trail, they have jobs. I would be getting to the pass around noon on a week day, which made the likely hood of us meeting up seem unlikely. Therefore, I planned on getting to the store, sorting my food, eating a burger, doing laundry, charging my battery pack, and then heading back to the trail. I was hoping to accomplish all of this and still hike another thirteen miles.
I got to the store at noon as I had planned. The lady working the counter was not very friendly, but there was a guy working who was very polite. I decided to only deal with him, but when I had to speak to the lady I was over the top friendly. I thought that maybe I could win her over, but she never warmed up to me. I payed for my mail drops, they charged $5 per package to hold them for me. I also paid $6 to do my laundry. I thought that this was a little on the high side to pay for laundry, but with no other options I gladly have them my money. I started laundry right away since that is the most time consuming chore. Next I opened up my boxes. My new kicks are very colorful. Usually I don't go for that much color in my shoes, but I really like the color scheme. The just look fast. 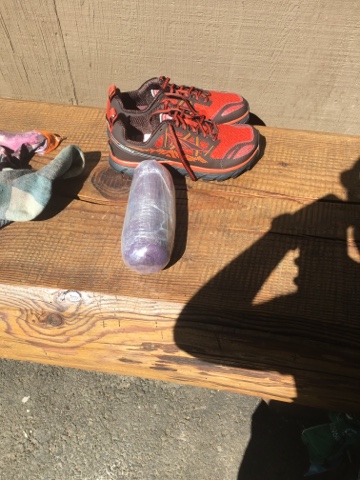 . New shoes
My dad creatively found a way to fit my fleece into an already jammed full box. He shrink wrapped the heck out of it. I wish I could pack it like this every day, so it would take up less room in my pack. It looked like a fleece burrito, which made me hungry for a burrito. 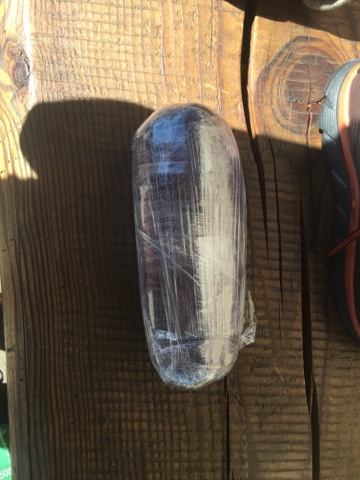 Non edible fleece burrito
This next stretch is going to be 4.5-5 days long. I'm not looking forward to carrying all of this food. It seems like way to much, but I know better. It will end up being just enough. My pack feels really really heavy. Once my laundry was finished I still had to wait for my battery pack to finish charging. It holds 16,000 mAh and takes forever to fully charge. I really wanted to be back on the trail by three o'clock, but it wasn't finished charging yet. I decided that I couldn't wait any longer so I unplugged it and packed it away. I was just picking up my pack to hike out when a few of my friends showed up. Raging Pineapple, Touley the Optimist, and Homestretch had just walked up. I spent about ten minutes catching up with them before attempting to leave again.
As I picked up my pack for the second time someone tentatively called out my name. It took me a few seconds to recognize him. He was too clean and his beard was much shorter than the last time we had seen each other. It was non other than Tree Beard! He had gotten the day off and him and his sister had driven over two hours to come and see me. I didn't have cell reception to know that they were coming. They made the drive up with no guarantee that they would find me. Incredible!
We drove down the mountain to the tiny town of Packwood. Tree Beard treated me to one of the best pizzas I've ever had. It was pepperoni, green peppers, onions, Canadian bacon, and cashews. Cashews+pizza=deliciousness. I just love talking with Tree Beard. You never know where the conversation will take you. We discussed trail life, socioeconomic division, cars, the Pacific Northwest tribal communities, music, the war on drugs, and numerous other topics. He offered to drive me back to his house instead of the trail. I didn't want to be an inconvenience and make him have to do the long drive again in the morning, but he insisted. I was more than happy to oblige. I would have hated to miss out on seeing Burl.
By the time we made it back to their house it was almost seven thirty. Burl greeted me with a giant hug. We sat in their living room catching up until late. Burl works for the Department of Child Services. I was interested to hear all about her new job. It takes a special kind of person to do that kind of work. We stayed up late into the evening reminiscing about the Appalachian Trail. 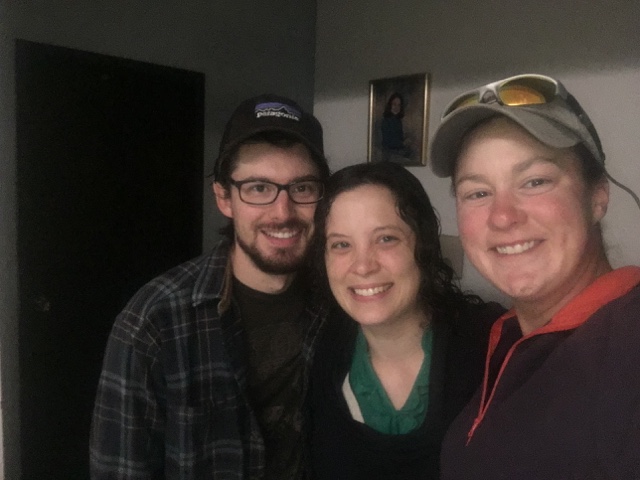 Tree Beard, Burl, and I
Plans are now in motion for the CDT(Continental Divide Trail) for 2018. I hope it works out that we can hike together once again.
"In crucial things, unity. In the important things, diversity. In all things, generosity."
- George H. W. Bush.
Posted by Yoda at 9:46 PM