Day 137- The One With The Fake Trail Magic 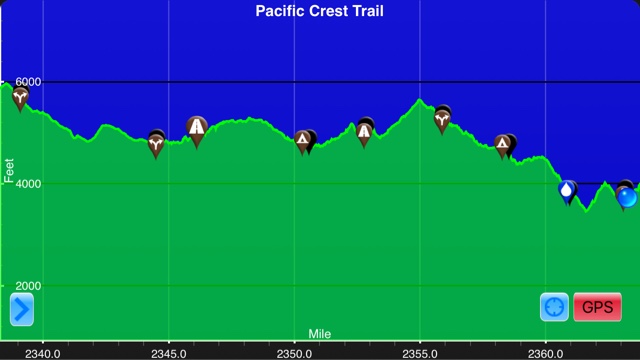 Total up/down: +3,903/-5,723 feet
Today was a lot harder than I thought it was going to be. The uphills are starting to become a lot steeper than anything I have hiked to date on the pct. I managed to leave camp just a little after seven o'clock. I really expected to hike another twenty-seven miles today, but I was forced to concede defeat. I banged out the first five and a half miles rather quickly. This morning was the first time in a long while that it wasn't really cold out in the morning. I was stopping within the first mile to peel layers off. I use an app on my phone called Guthook. It is a really cool app that has a built in gps to help me locate the trail if and when I get turned around. It also provides me with the elevation profile that you see at the beginning of my blog posts. Another cool feature is that users can comment on waypoints. I knew that I would come across a ski cabin that hikers can use as a shelter. The comments informed me that there was trail magic at the cabin. That was the entire reason I banged out the first five and a half miles so quickly. I was looking forward to a little magic. Unfortunately, when I arrived I was instantly disappointed. I was greeted by a surly group of twenty somethings. I tried to make polite conversation, but they weren't very friendly. After a long while they offered me a warm soda. When I gratefully accepted I was told that I needed to pay them $3. I really thought they were joking, but sadly they were not. I'm not sure what they think the definition of trail magic is, but I can assure you it is not charging a ludicrous amount of money for a soda. I didn't bother staying any longer. I thanked them for offering to charge me for a soda, but said I didn't have any cash. They said I could chop some firewood in exchange for beer, soda, or whiskey. Once again I said thanks but no thanks and wished them a good day. I said a few hellos to a couple of hikers I knew before pressing on. 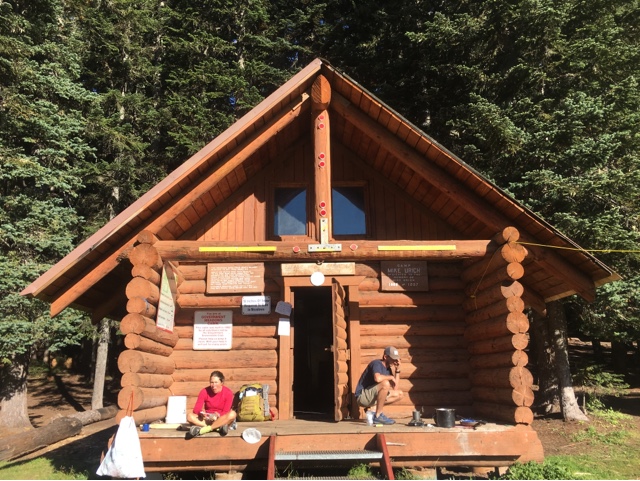 Ulrich ski cabin (Monarch on the left, jerk on the right)
Two of the hikers that I saw there I haven't seen since the desert. Monarch had to flip up to the Canadian border and is now hiking southbound. It was nice to see her again. I met Hot Tamale on my third day and haven't seen her since the desert as well. I thought she had quit the trail, but she didn't. She skipped the Sierra, Northern California, and most of Oregon. She is now hiking northbound, but only doing sections that she wants. After chatting for a few minutes I said my goodbyes and left. 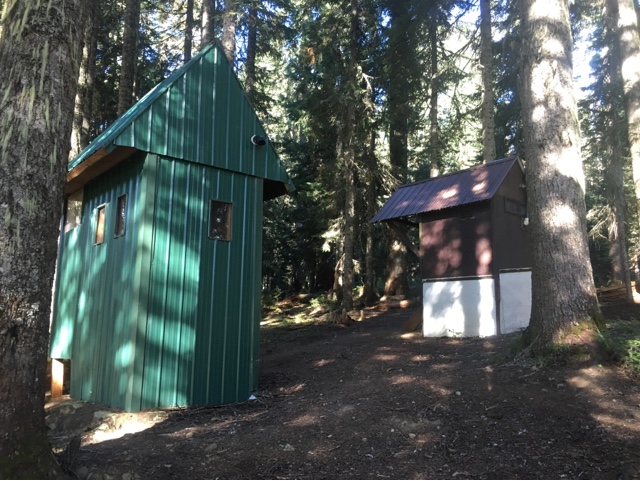 Two fancy, but disgusting privies
Throughout the entire hike today I kept expecting it to rain. The last forcast I had heard called for an increasing chance of showers as the day went on. The early part of my day the weather was beautiful. The sky was blue and the clouds were minimal. As the day progressed more clouds began to roll in and the humidity began to skyrocket. I decided to hike as far as I could and not to worry about the weather. It would either rain or it wouldn't, there was nothing I could do about it.
I had more spectacular views of Mt. Rainier this afternoon. Yesterday the mountain was mainly ahead of me, today it seemed to stay to my left. For most of the afternoon I usually had at least a partial view of the mountain. 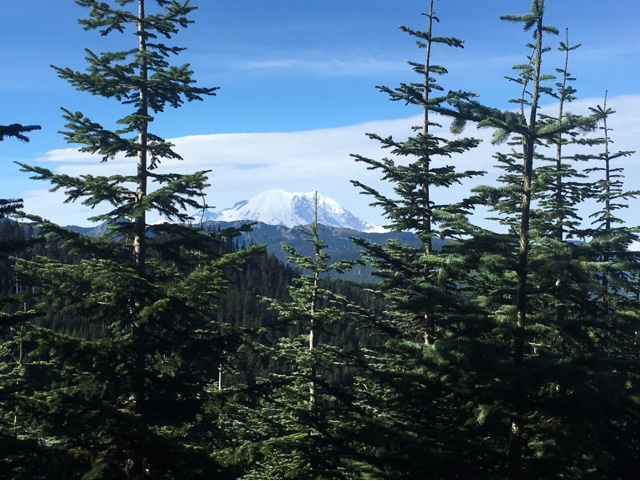 From this angle it appears to be carved out of ice 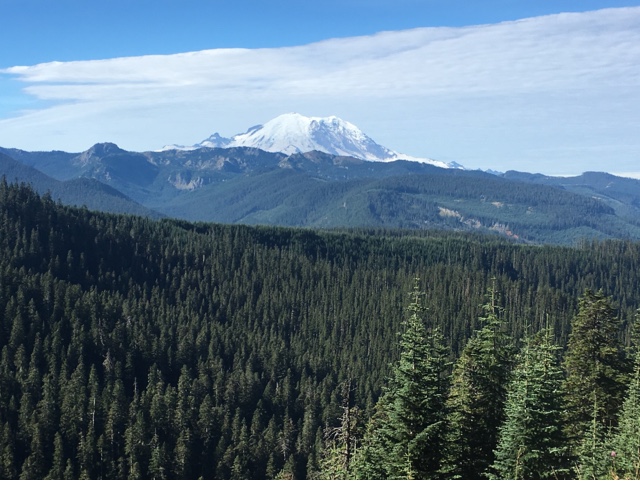 Glaciers galore
I spent a few miles hiking through a burn area. I was surprised to find out that this burn happened in 1988. I would have expected to see more recovery since then. Maybe there was a more recent fire in the same area. 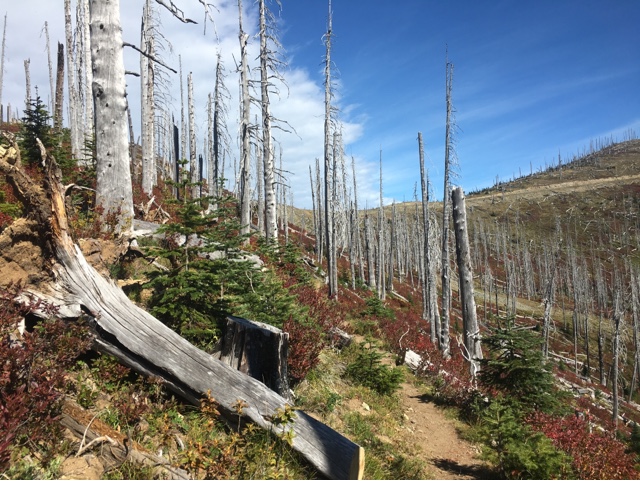 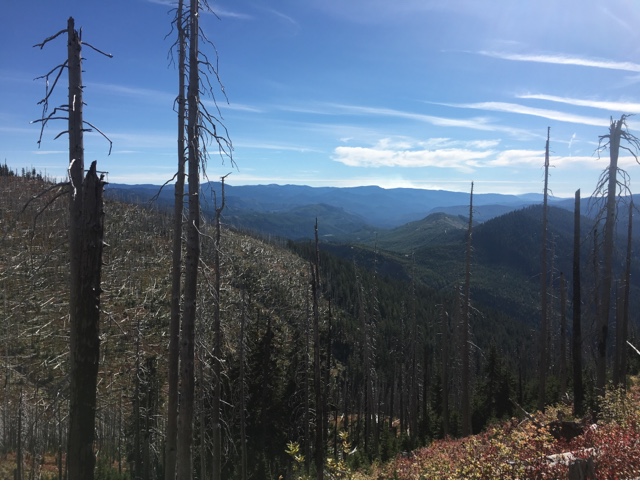 Start contrast between the burned portion and healthy forest
Every time I come across an area such as this, the downed trees and silver trunks remind me of match sticks. I'm not sure why, but that is what crosses my mind each and every time. 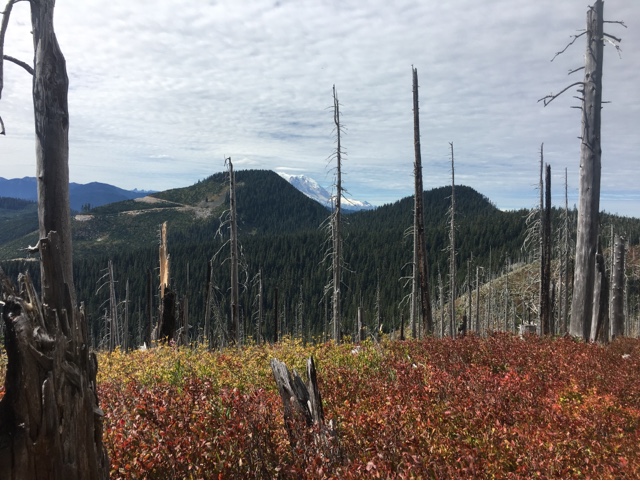 Lots going on in this picture: obvious signs of autumn, burn area, Mt. Rainier, and clouds rolling in
I passed a few day hikers that gave me an updated weather report. It would start raining overnight and continue for twenty four hours. I was really hoping that they were not correct. To play it safe I decided to get into camp early so I could get set up in case it started to rain. The sky wasn't look too ominous yet, but the cloud coverage was definitely increasing. 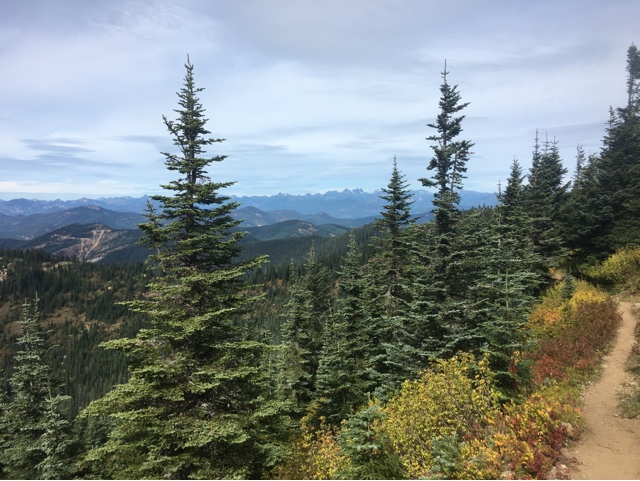 Goat Rocks Wilderness in the extreme distance
It is amazing how quickly the forest is changing around me. Everyday there seems to be a little more color in the trees and shrubs. The maples are beginning to turn such vibrant shades of red and yellow. The huckleberry shrubs are also turning a vibrant red. The evergreens are beginning to drop their needles. I missed most of the signs of fall on the AT, but I am lucky enough to see it all around me now. 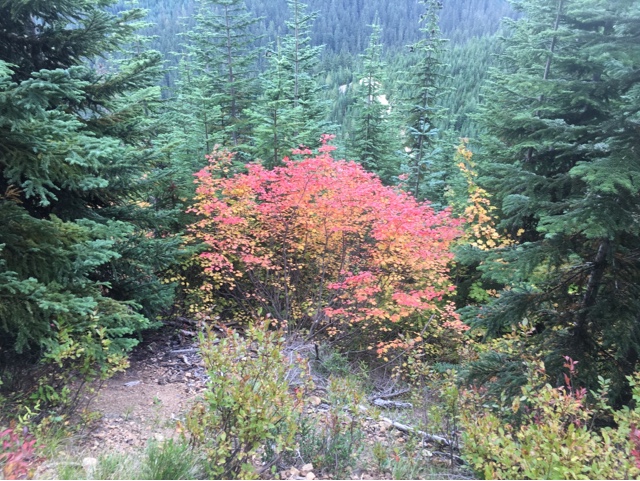 Vibrant splash of color
This area is also showing signs of a logging operation. I lost count of how many logging roads I crossed today. The amazing thing is how tiny of a portion they cut down on each mountain side. In the distance it looks like the mountains got a bad haircut. 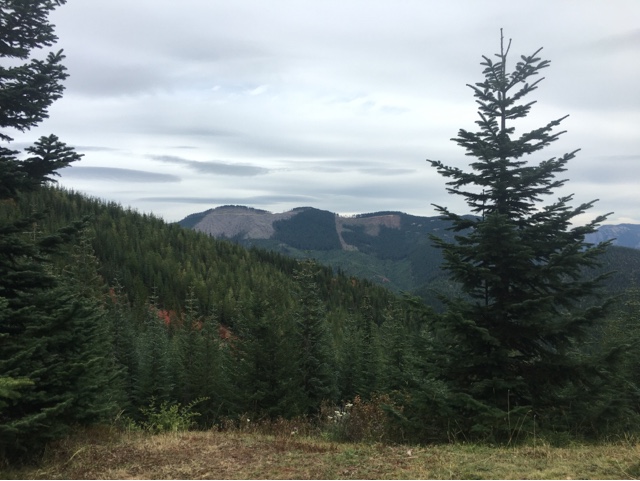 Bald patches
I found a nice flat spot to camp on that was close to a water source. The site seemed like it would give me good protection from the wind and rain if a storm moved in. I quit hiking around five thirty. I could have made it another 3-5 miles today, but the trail was going to gain 1,500 feet of elevation over those miles. I didn't want to camp at a higher elevation with no tree cover when I was almost one hundred percent positive that it was going to rain. I guess tomorrow morning I will know if I made the right decision. As I was cooking dinner the temperature quickly dropped. I hurried up and finished eating so I get get all snuggled into my sleeping bag. 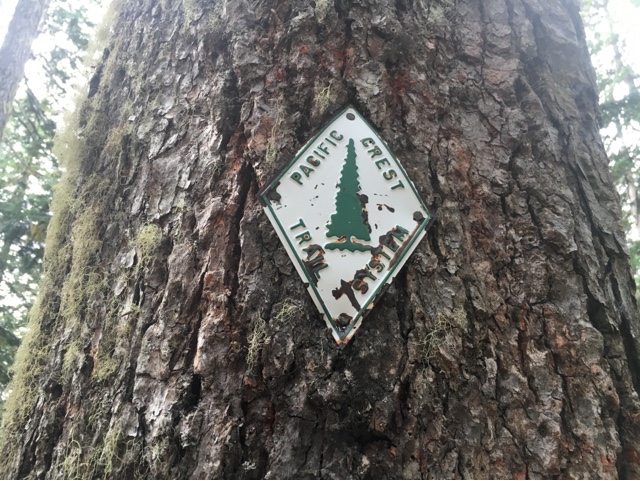 Old school trail marker
"It never costs anything extra to be nice"- Steve Fleming
Posted by Yoda at 4:27 PM